In Paraguay, the long struggle for the indigenous people to get back their land continues. In Part 1 of this tale, we visited small communities waiting for a resolution on their land claims. Often camped by the side of a highway, they hope desperately for good news.

There is reason for hope, though. In this story, we travel deep into the heart of the country to try to find a tribe that has moved back to traditional land and is beginning to rediscover the lost indigenous culture.

Right from the start, this promised to be a true adventure. We were planning to head into the middle of the wilderness, far from civilisation and far from any help if we ran into trouble.

Our destination was a small village in the depths of the vast Paraguayan forests – a place too small and new for mapmakers to bother themselves recording. We had a plan but it was by no means full proof.

How could you ever be certain of a plan that involves a small rented boat, donkeys, minimal camping equipment, limited food and help from locals who potentially speak only their local dialects?

I had joined this expedition after meeting well-known British explorer Robin Hanbury-Tenison. This is a man who has been adventuring deep into parts of South America since the 1950s, well before tourists cut a trail and back in a time when there truly were still places to discover.

Now aged in his seventies, his passion for indigenous tribes has not waned through his work as President of Survival International and he had invited me to join his wife Luella and son Merlin on this trip. Our first leg began from the town of Concepcion, where we were to get on a boat. It was a small metal craft, about the size you would use for a day of fishing on a lake.

Our captain, known through our whole journey only as ‘El Capitano’, had one eye missing and, from accounts, was an alcoholic. Still, with one hand on the engine and one eye on the water, he drove straight. We headed up the Paraguay River, a wide flowing highway used by fisherman, cargo boats, and (presumably) drug runners from Bolivia. It had a small but regular amount of traffic.

After two and a half hours on the water, the unrelenting sun beating down on us and the splash from the river at times drenching us with a welcome coolness, we arrived at our first stop – a small village about 25 kilometres north of Concepcion.

It is a small indigenous settlement by the river, with animals roaming the fields, young residents playing volleyball and children staring at us suspiciously.

Although it seemed like an idyllic and convenient location, it is only temporary and many of the people in the community are planning to move into the forests to their traditional land. 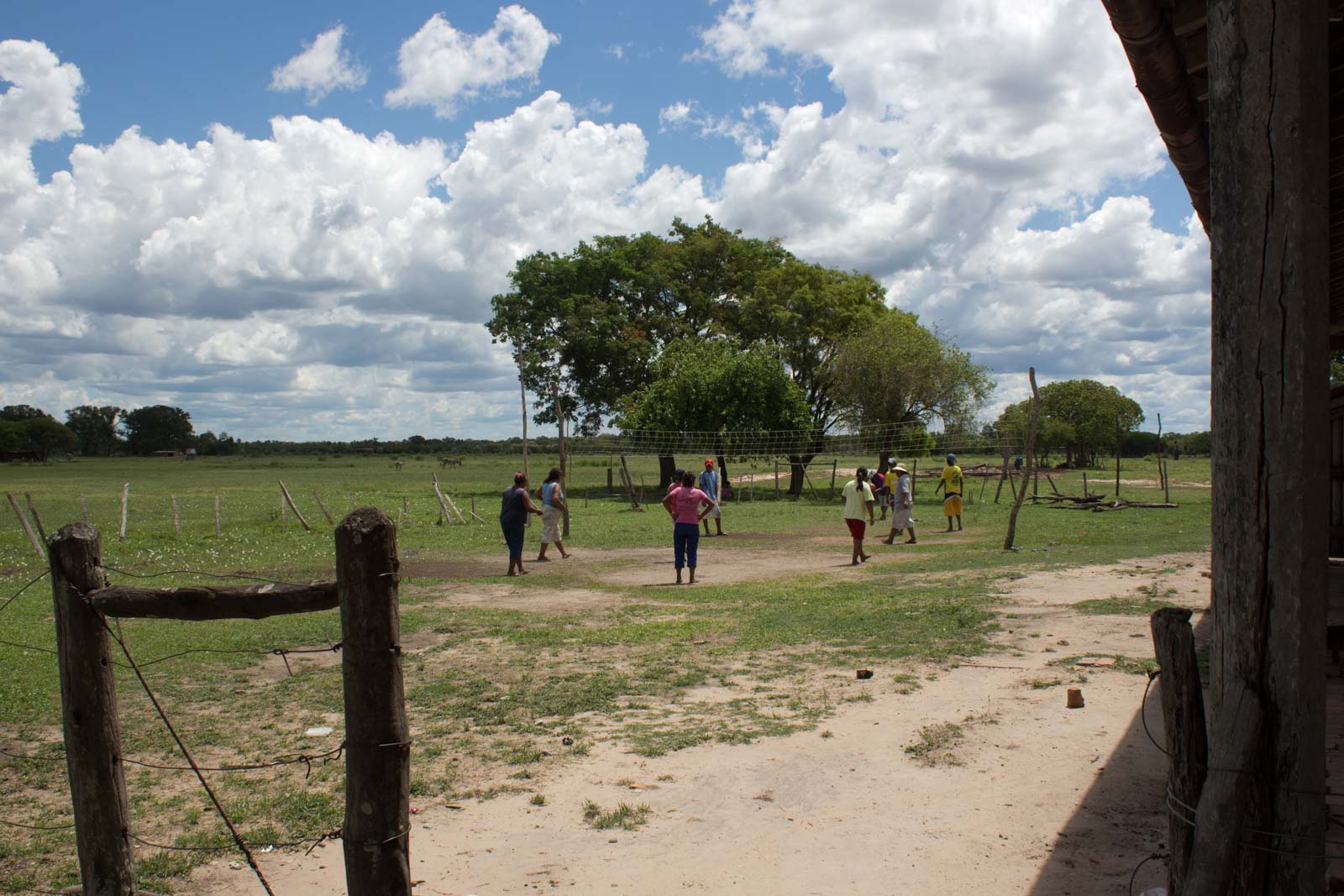 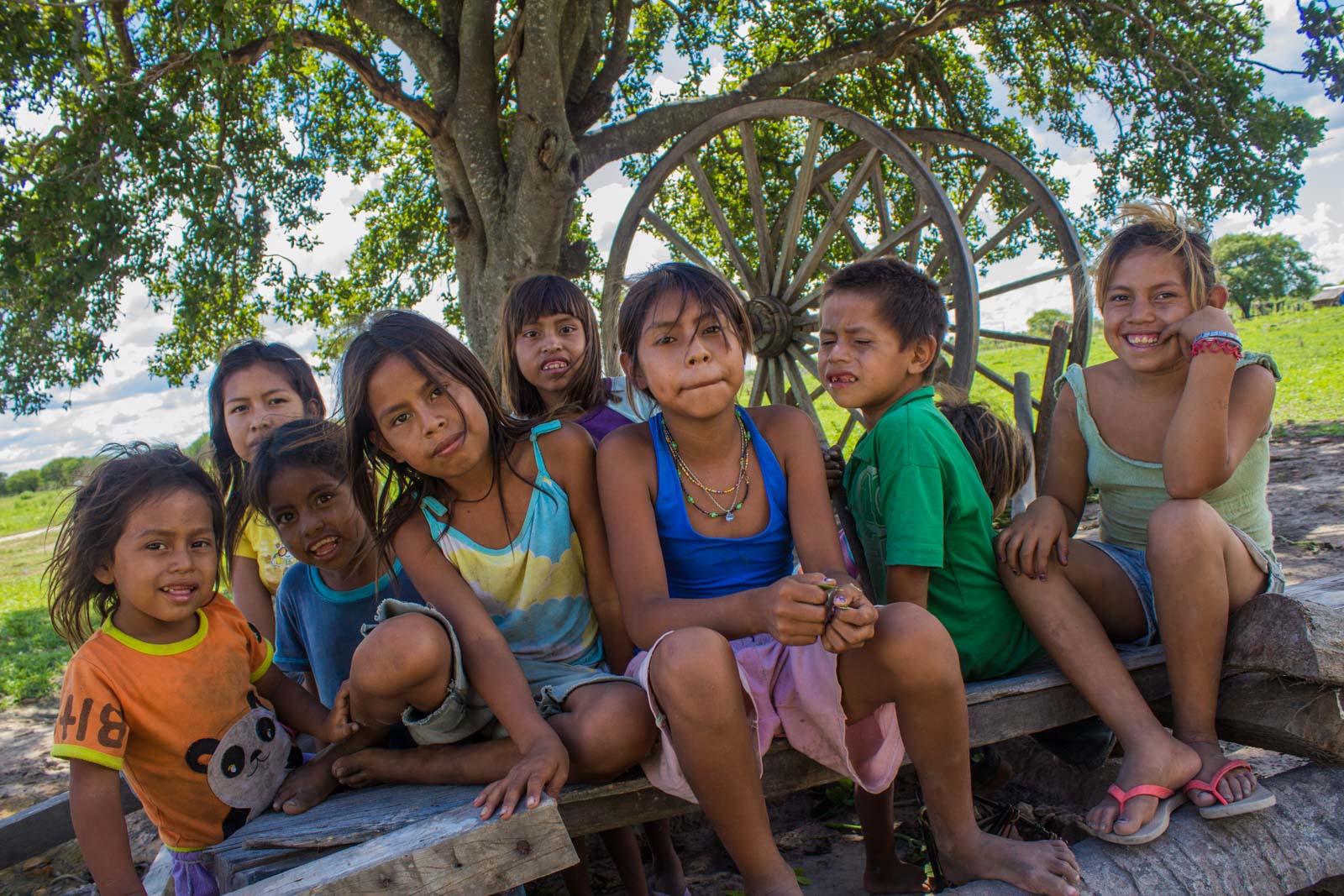 The search for the tribe continues

This was where we were supposed to meet the donkeys which we were going to ride for five hours through the bush to the community, camp there for the night, then ride back in the morning. But things don’t always go as you might hope.

We had made phone contact with the village leader to ask him to have some donkeys prepared and he’d assured us it was no problem. When we arrived we discovered that nothing was ready.

Selso, the leader, said he would go and get the animals and we waited, while members of the community asked us why we wanted to go so far into the forest and warned us of the mosquitos and water traps we might find along the way.

An hour of waiting turned into two, which turned into three. Slowly donkeys were saddled but there seemed no urgency in the process.

By the time everything was ready it was starting to get late and we were unsure if we would make it to the village by nightfall. 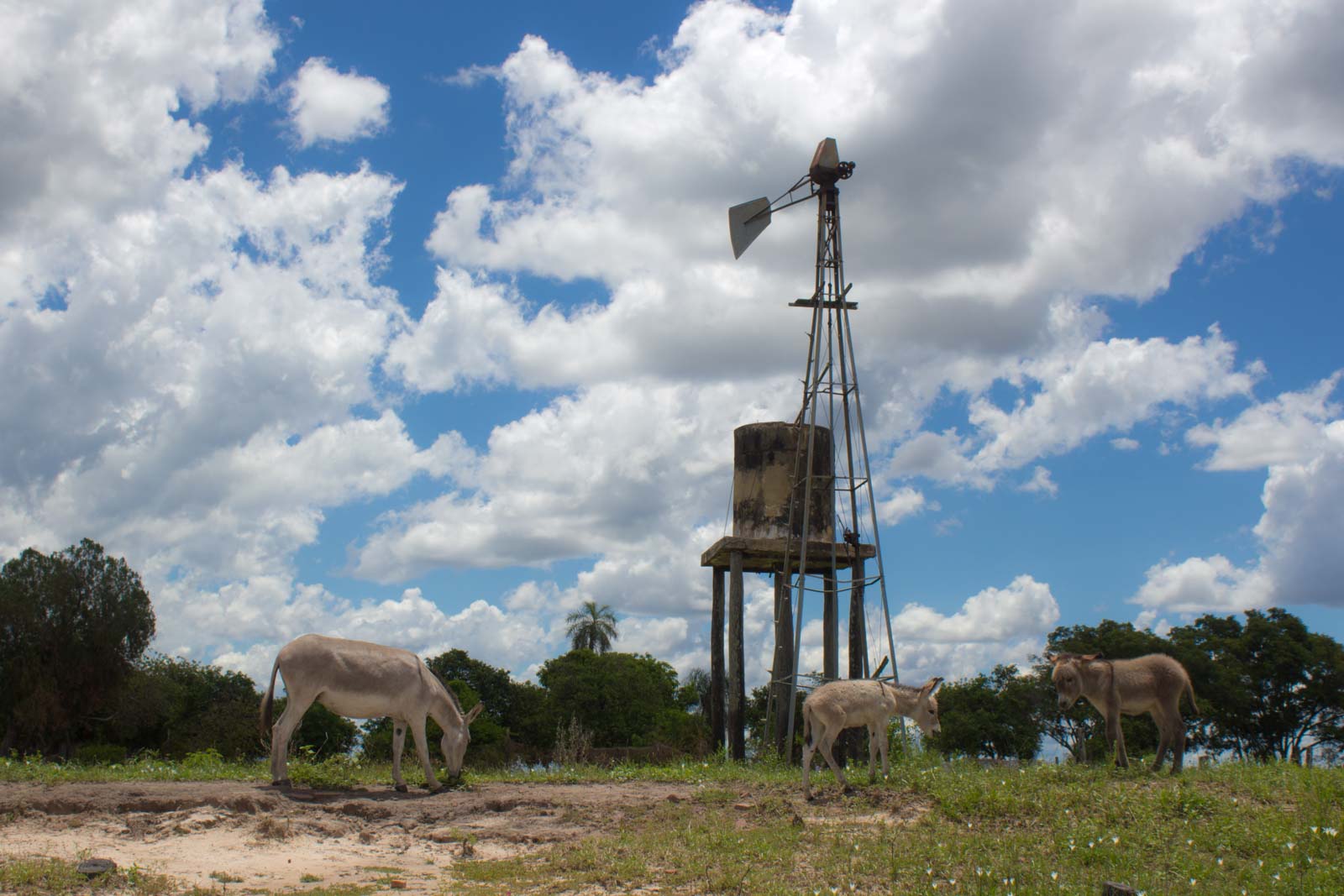 Together we discussed our options, unwilling to give up on the plan but also quietly acknowledging the truth – it wasn’t going to happen.

Our guide told us there was nowhere to camp along the way; another suggested that the donkey ride would be closer to nine hours than five; and another said the animals would be too tired to return the next day anyway and we would had to stay for two nights.

Everything was leading towards the inevitable and we realised there was no choice but to abandon the plan. Robin and his family may be experienced adventurers but with experience also comes the knowledge of when to cut your losses.

That was when Selso mentioned that there was another village that was in the process of setting itself up on native land in the style of their indigenous ancestors. And it was close enough that we could ride the donkeys there, meet the residents and ride back just in time before the sun set. 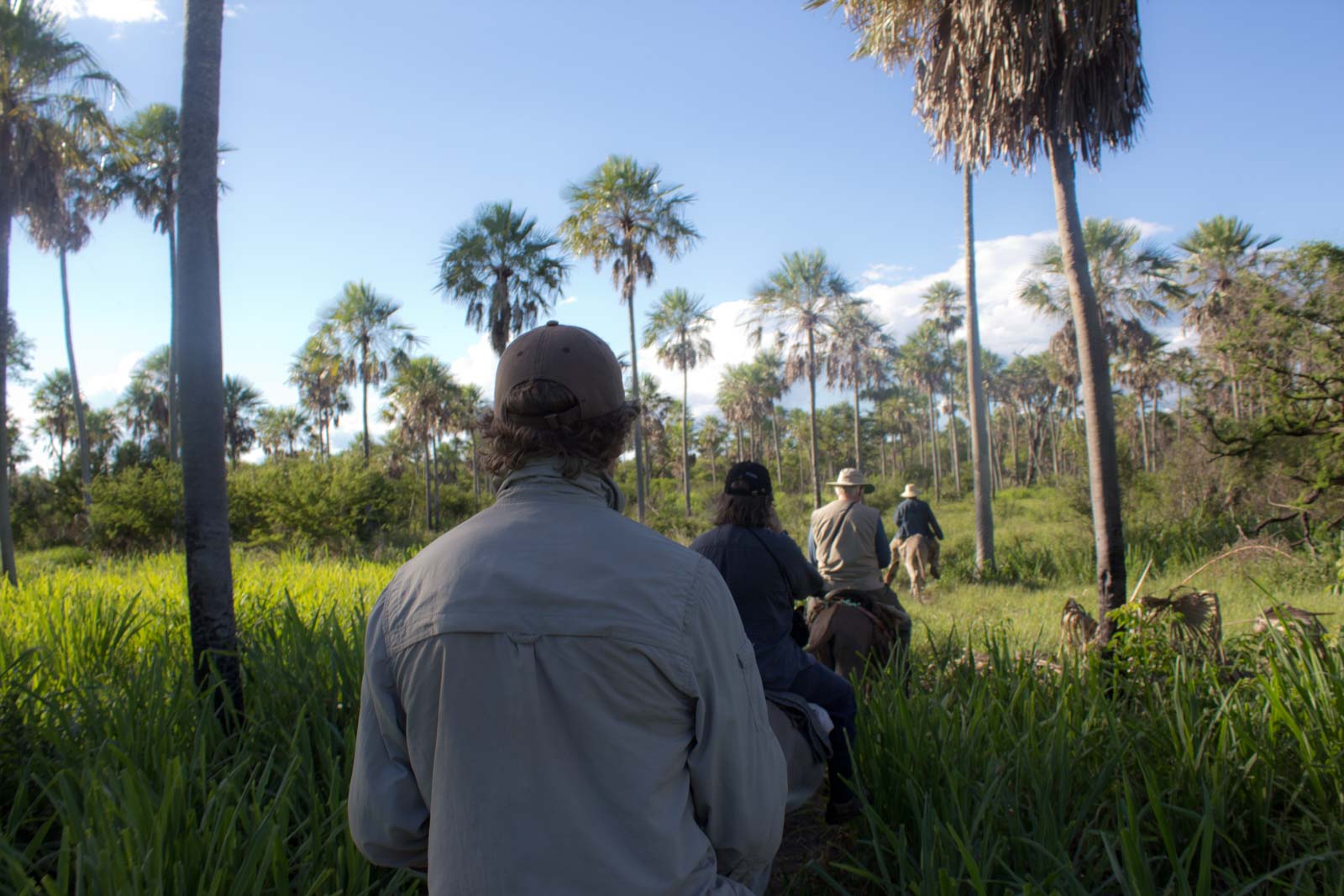 So we set off, our trusty steeds burdened with us but not our gear, which we had left with our boat. We left the river at our backs and entered the forests, my donkey needing slightly more encouragement than the others, unfortunately.

It took us about an hour and a half, through dense shrubbery that tore at our legs, past trees that towered around and decided our path for us, and amongst a collection of animals which gave away their existence by their sounds, the bites on my legs and the occasional flap of wings overhead.

But we got there. We arrived at the village where life begins again. 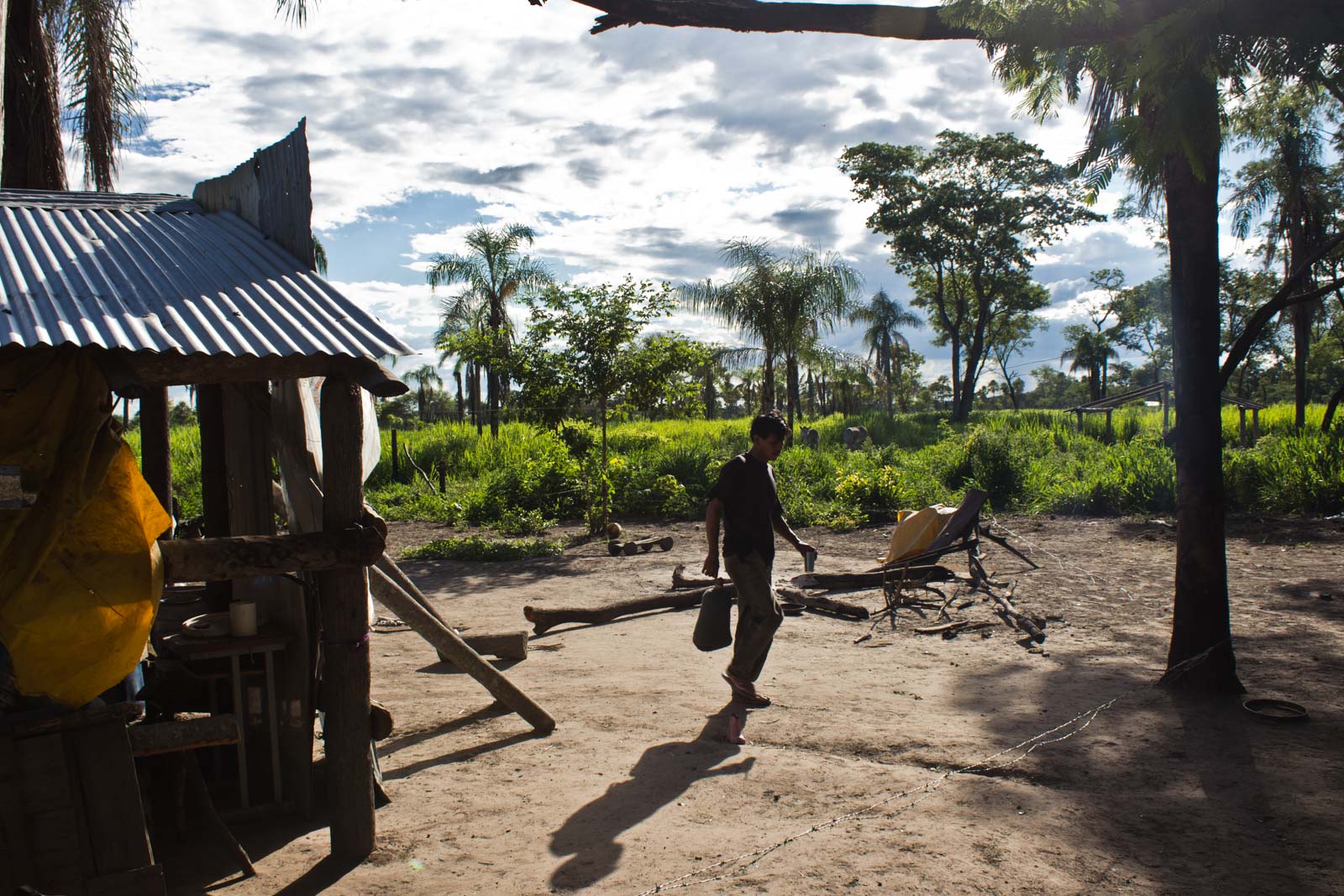 An old man greets us. We shake hands… he with his left as his right was missing. The community he welcomes us into was tiny, just a couple of buildings in various states of permanence.

Only twelve people live here at the moment but more are expected over time. They are able to bring very little in from the outside world so they get what they need from around them.

A bucket has a large pile of honeycomb collected from the local bee collection and two small baby peccaries are tied up to wait until they are bigger and more edible. Above them hangs the carcass of their mother who was big and edible enough. We meet a younger man who is holding a large knife. On the ground is a deer that he is skinning and preparing as food. He carves and cuts like an expert and with a relish that is as much from the act itself as from what it will achieve.

This is an act from his past, a connection with nature that was once a daily routine for his people. And as this young man stands over the animal he has caught and readies it for his family’s meal, he knows he has returned to his land. What we found out there in that small community deep in the forest was a sense of hope for the indigenous tribes of Paraguay.

The day before we met people on borrowed hectares who wanted their own traditional land but didn’t know exactly what would happen if they got it. But we now knew there was potential and we saw what could happen for those who truly wanted to get closer to their original cultures.

It’s still not perfect. After meeting the community members we rode the donkeys back to the village on the river and camped there for the night.

In the morning the man who had been carving the deer turned up drunk. He wanted a lift in our boat across the river to the bottle shop. All the elements fit together, though, in the sense that nothing exists in isolation and things don’t always go according to plan.

We didn’t make it to the community we intended to reach but we found one just as good that serves as an inspiration to the indigenous rights campaign. And maybe that community isn’t turning out exactly as intended but it will become what the people want it to be, not what is forced on them.

>> Read the first part of my story here