Expedia.com heard about my recent trip to Prague and asked me to share highlights and the must-sees from the city.

Within minutes of arriving in Prague, I realise how mistaken I have been all these years.

Walking from the train station to my hotel, I go through Wenceslas Square and past the Czech National Museum. Grand buildings and monuments blend in with the hip cafes and trendy shops. The footpaths are busy with tourists and locals wandering past or stopping to enjoy the sunshine.

I had completely underestimated Prague. People have told me previously that Prague is beautiful but I had always assumed they meant just the very centre of the city, or relative to other cities in this part of Europe.

I see now that the Czech capital is stunning compared to all of Europe, if not the world. It is a gem that I already regret not visiting earlier. 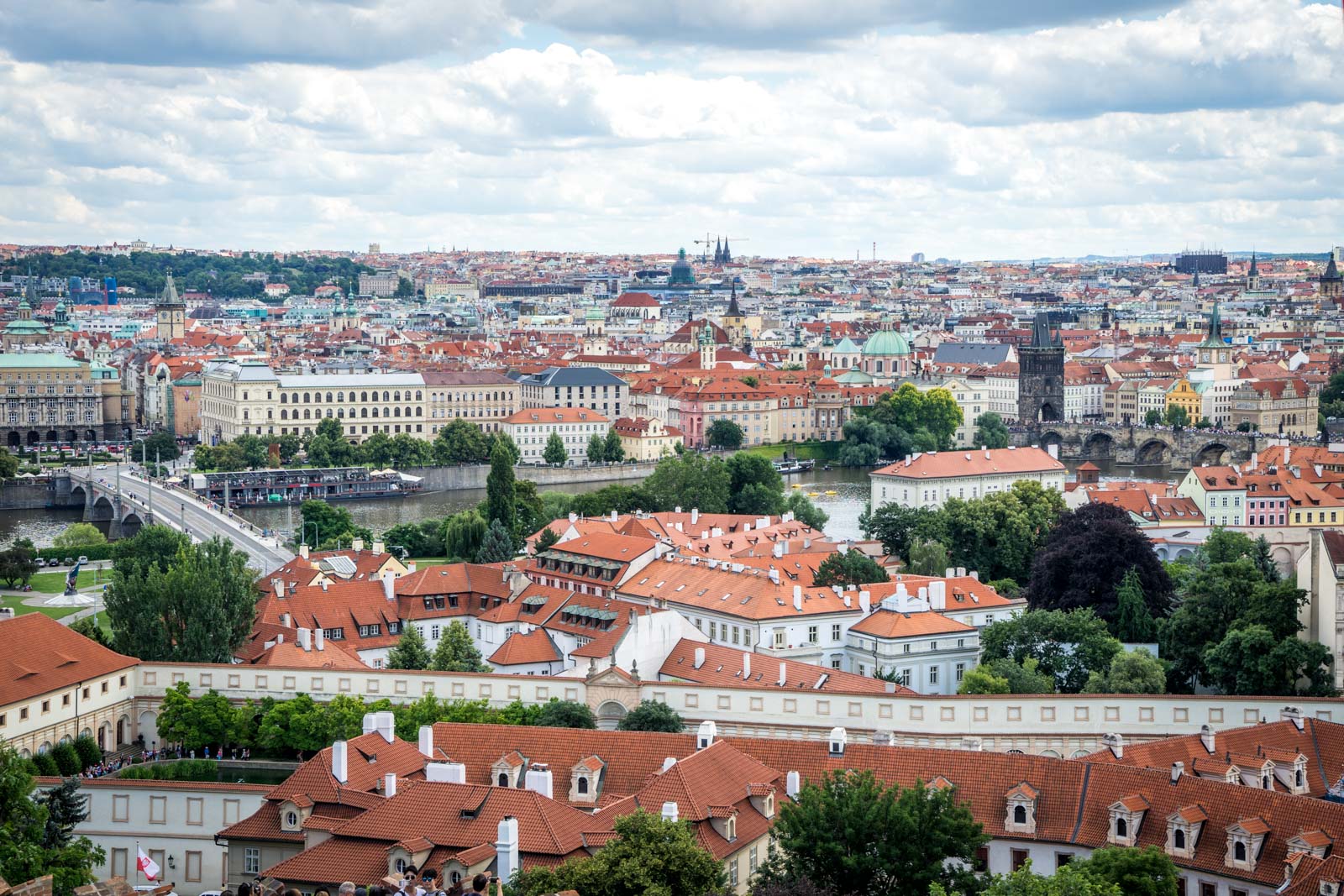 One of the things that, to my mind, makes Prague impressive is the scale of the historic part of the city. It leads from the top of the hill to the west, down to the Vltava River, and across to the web of boulevards and alleys that takes you to churches, squares and hidden museums.

You need several days to explore Prague – let alone do some day trips to the surrounding region. But within one day you can get a great overview of this implosion of styles from the 11th century to the 18th century (with a few modern twists thrown in for good measure). 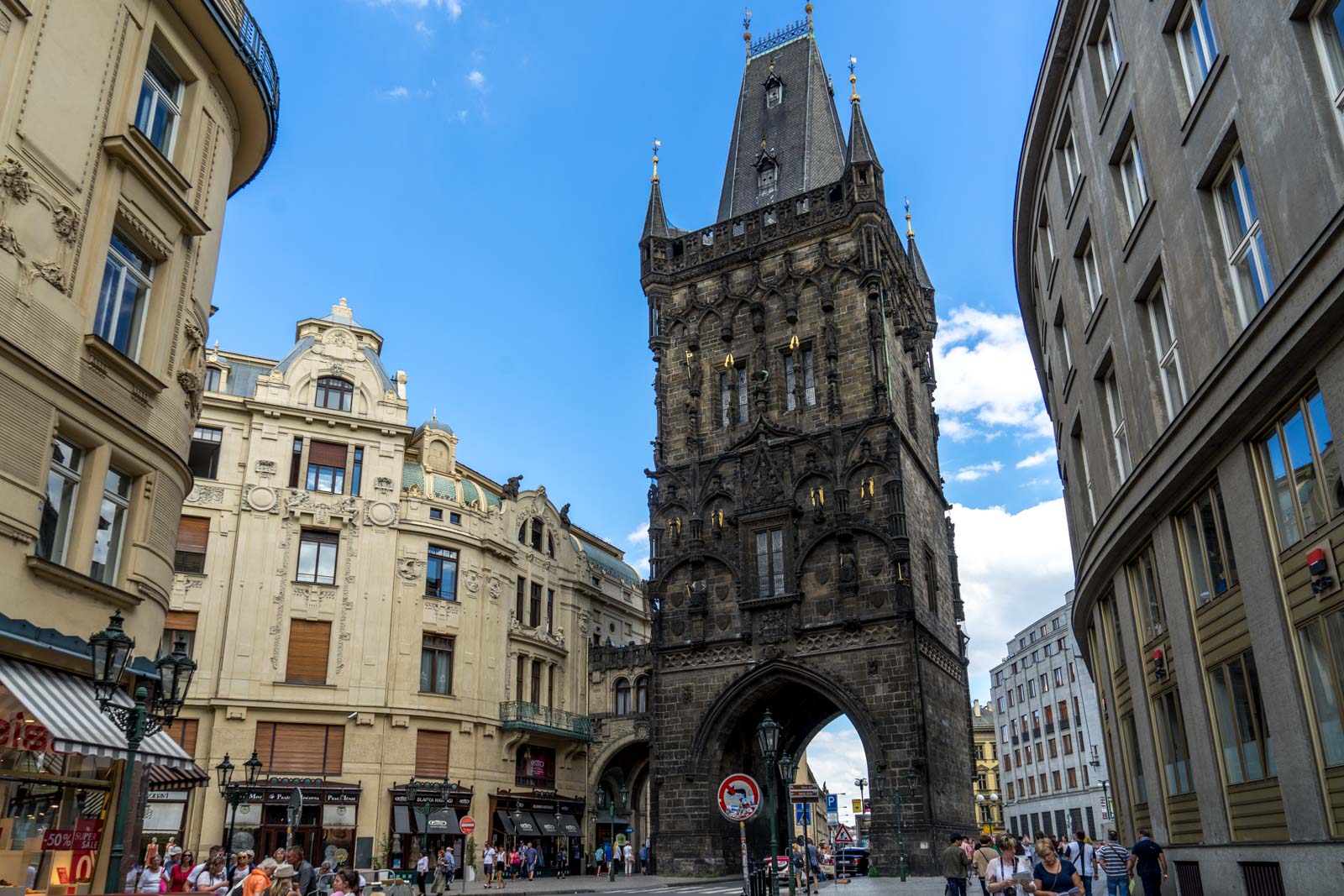 I have put together a bit of a suggested route for exploring the city. To get in the mood, I would also suggest checking out some of the photos that Expedia has of the main sights in Prague.

Seeing the highlights of Prague in one day

Let’s start at the top, at Prague Castle. The building dominates the skyline from below but up here you can look out across the river to see the old town and how it all fits together. We’ll come to these streets soon.

But first I would suggest exploring the castle. It’s a complex of different buildings that show how life was from the 9th century until today. It’s said to be the largest ancient castle in the world and has the crown jewels of Bohemia hidden inside. You won’t be able to see them but there’s plenty to discover.

>> Read my story about Prague Castle 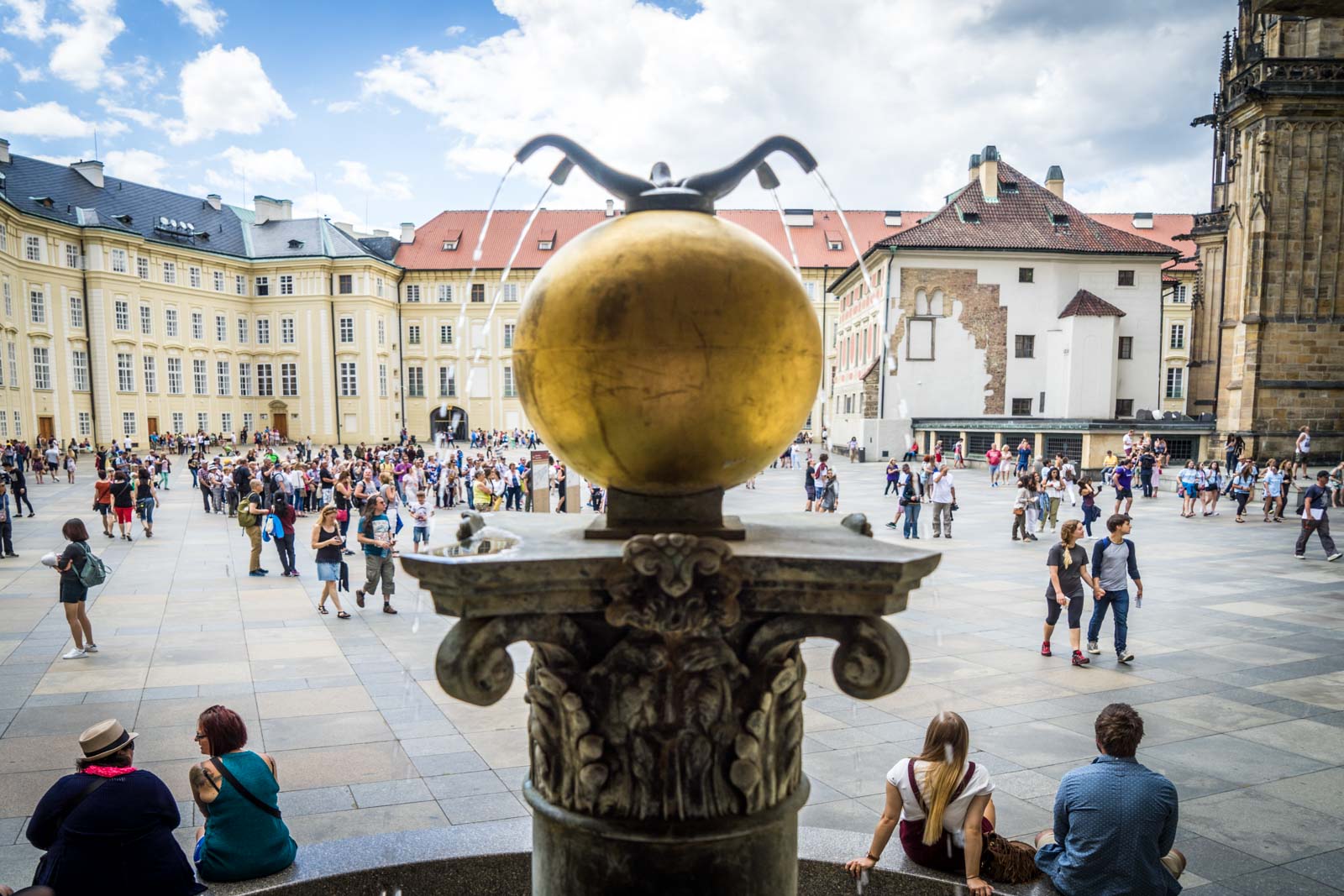 Right next door is the St Vitus Cathedral, probably the most impressive building in the city. From the outside you can see the size but go inside and it’s even more impressive – as though you are entering an enormous art gallery.

Make sure you take note of the stained glass windows, the wooden carvings above the doors, the mosaics and all the stone statues. 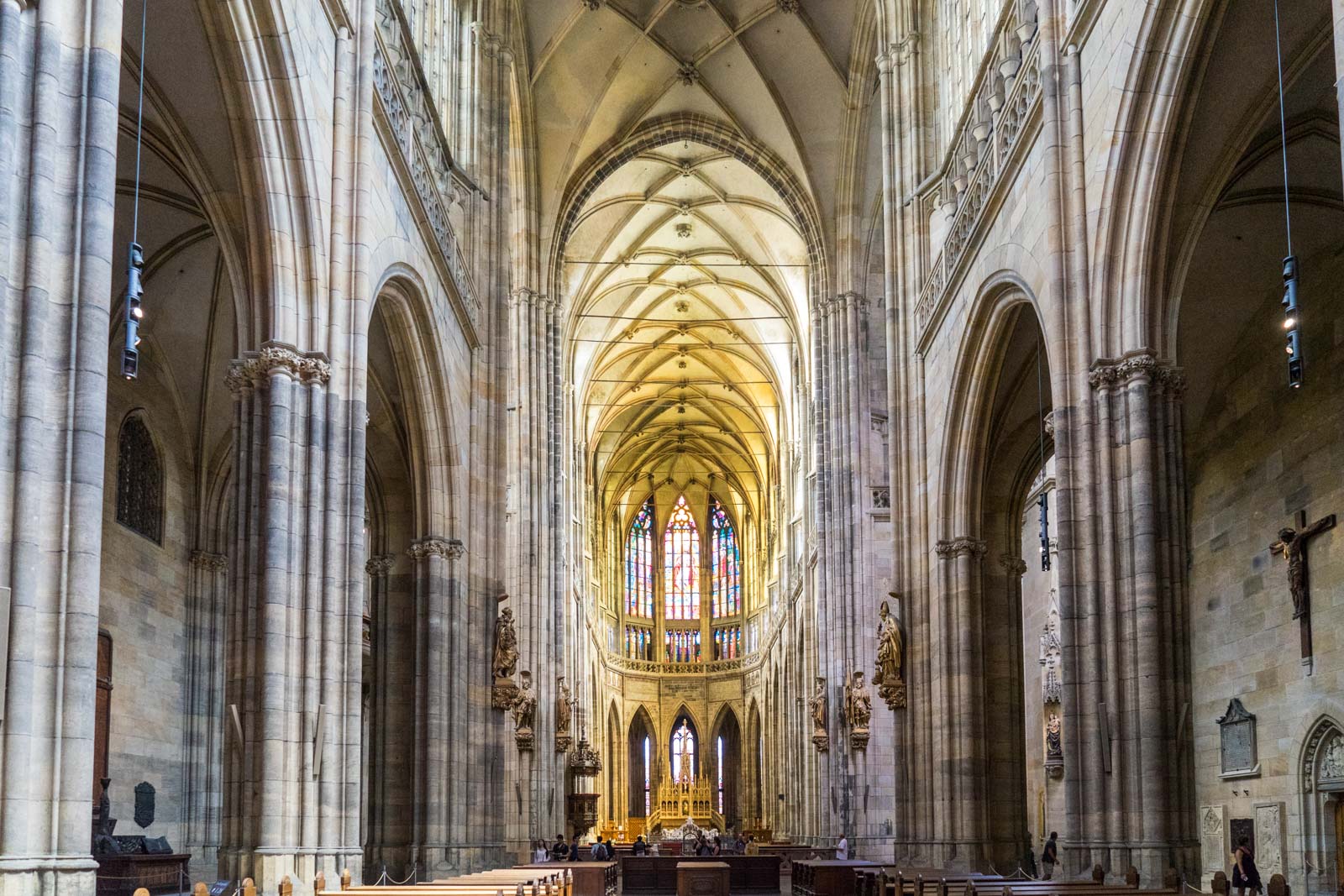 Next I would suggest heading down the hill, through the narrow streets, past St Nicholas Church and to the Charles Bridge. The bridge is an iconic landmark of Prague that was built from 1357. On either side are beautiful statues (30 in total) that watch over you as you walk across.

It’s always a busy spot during the day but that brings out market stalls and buskers so there’s plenty of entertainment. 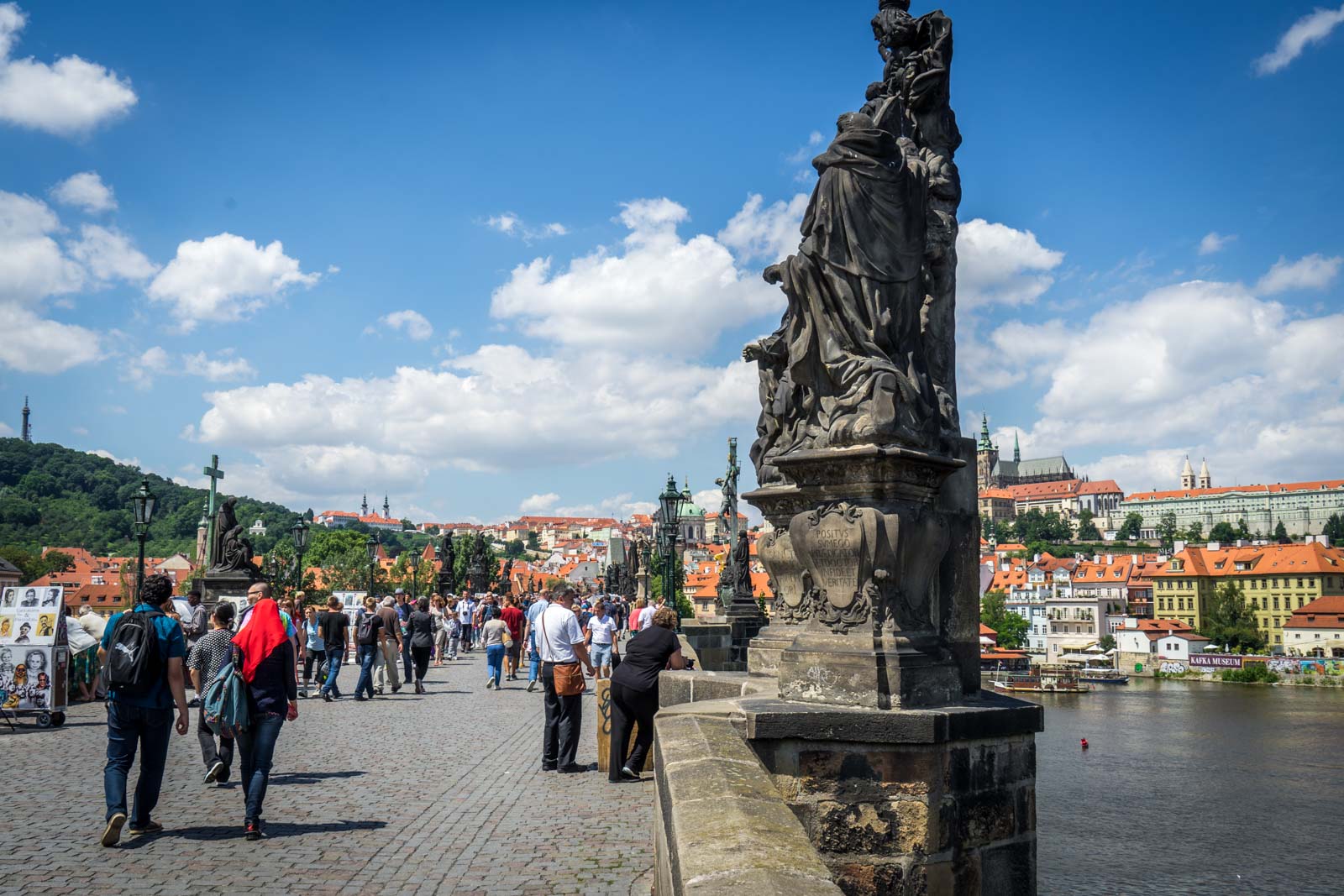 On the other side, you’ll see the historic centre in front of you but rather then going straight in, take a left and walk along the river for some beautiful views back across to the castle and cathedral.

At the 19th century Rudolfinum (with an art gallery inside, if you’re interested), turn right and you’ll be in the old Jewish quarter. Here you’ll be able to see some lovely synagogues and the Old Jewish Cemetery, where each tombstone tells a story. 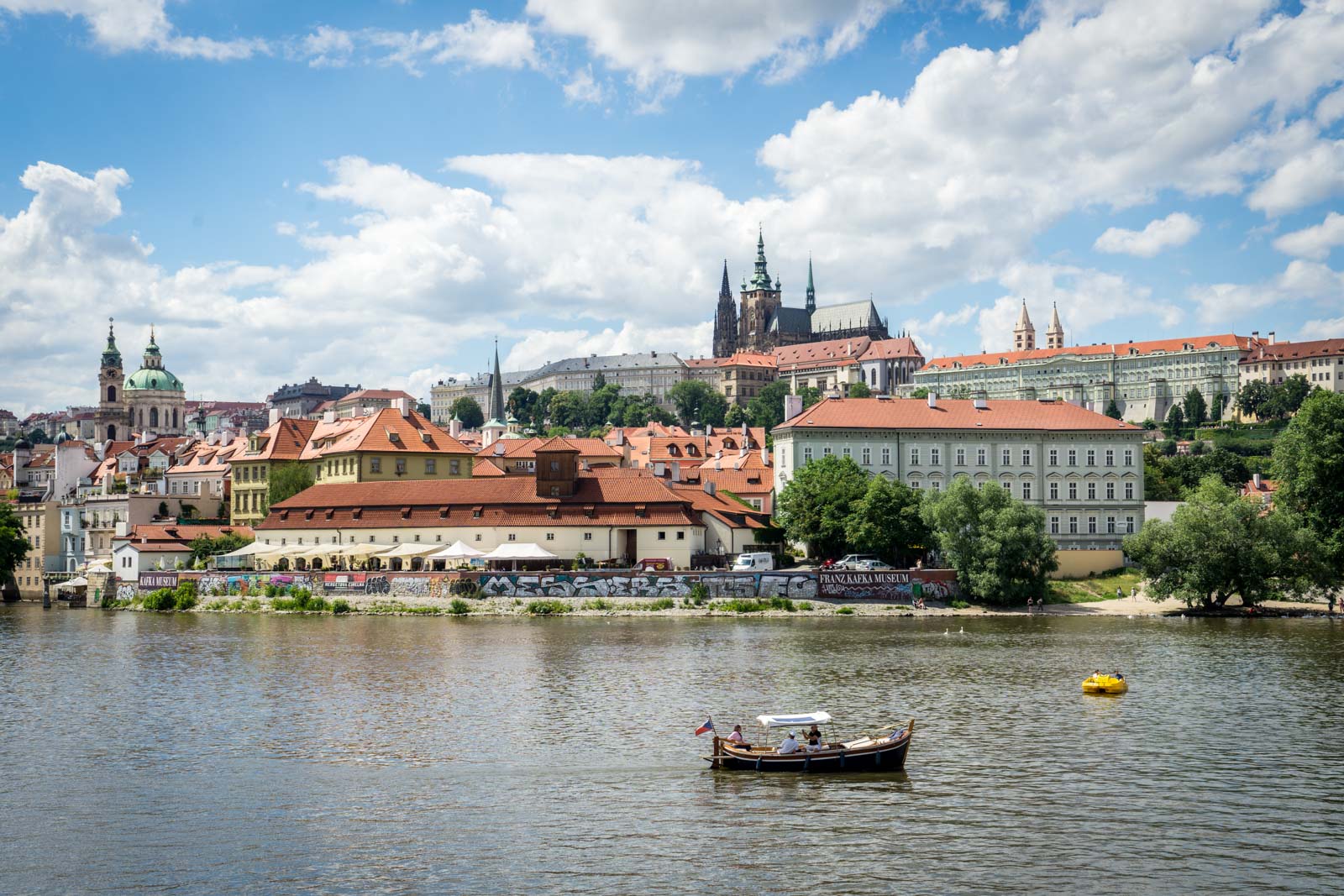 Just a couple of hundred metres south, you’ll find yourself in the old town square, a stunning spot with plenty to see. In one corner, on the Old Town Hall, is the Astronomical Clock.

Every hour the mechanical clock puts on a wonderful display with a procession of apostles and moving statues. It’s impressive today but imagine what people thought of it when it started operating 600 years ago! 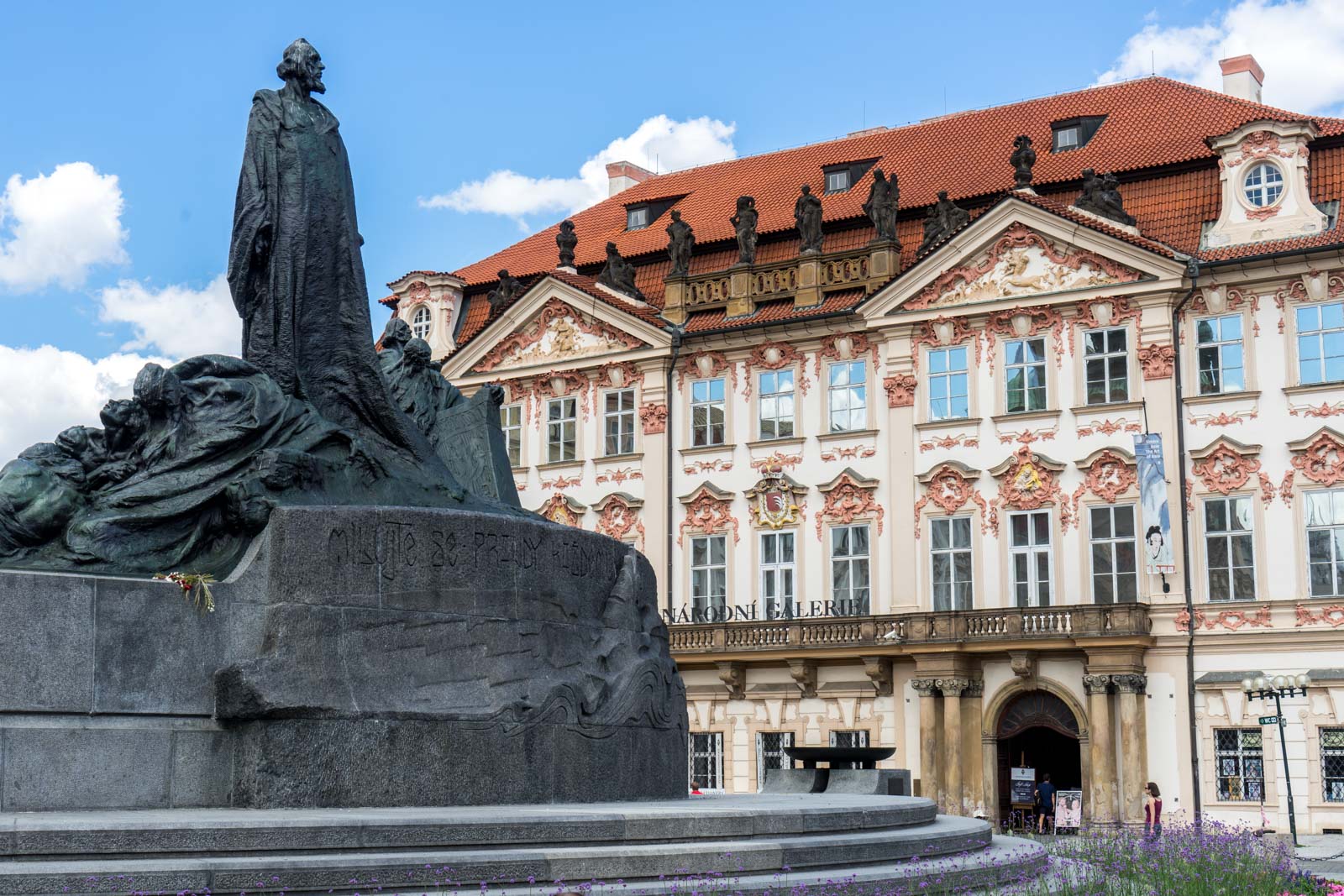 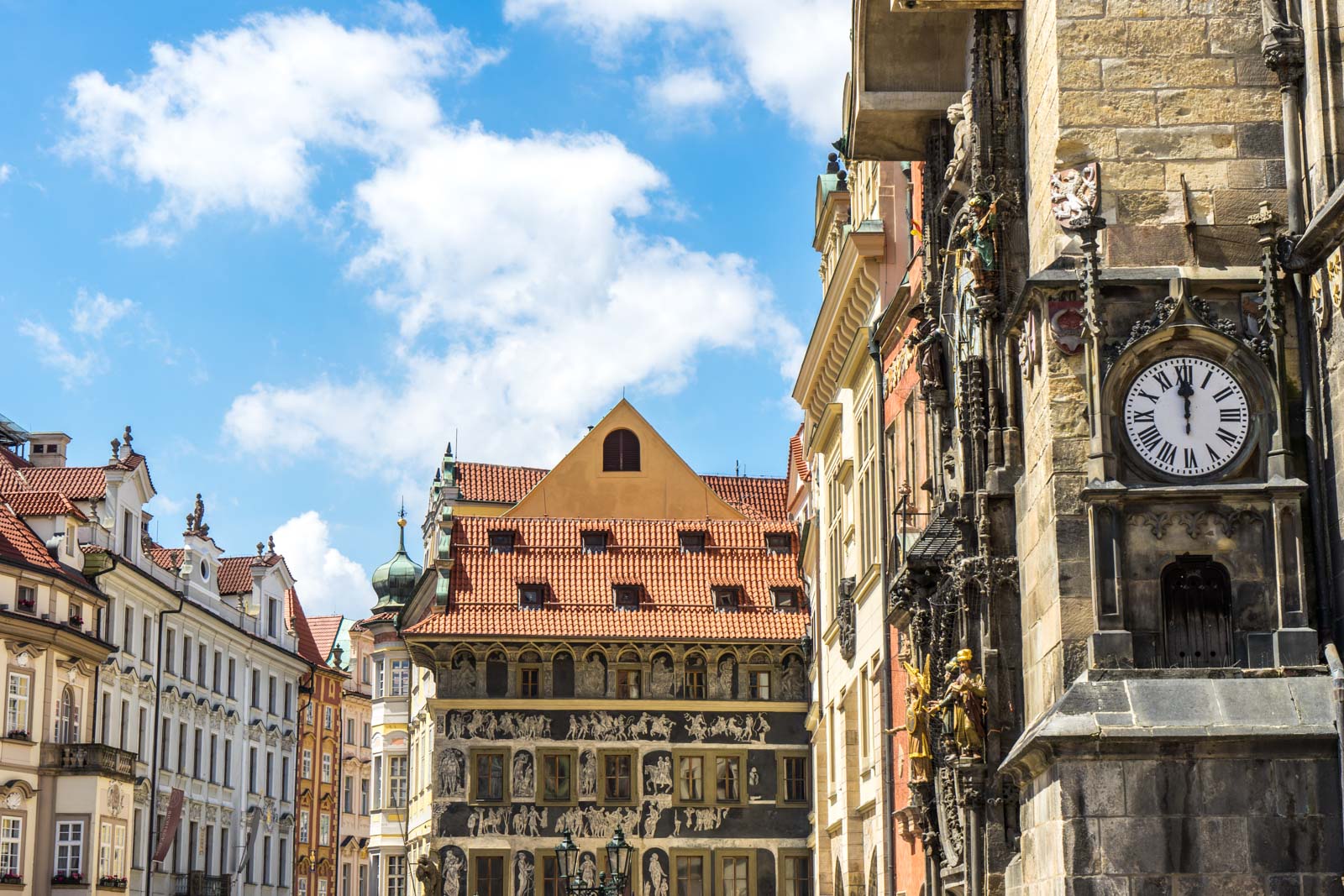 The National Gallery is also on the square, along with views of dozens of other buildings that show the rich architecture of the centre.

When you’re finished here, I would suggest walking east along Celetna Street until you reach the Powder Tower and the Municipal House concert hall. (You can do a guided tour inside the Municipal House to see the grandeur of this art nouveau palace.) 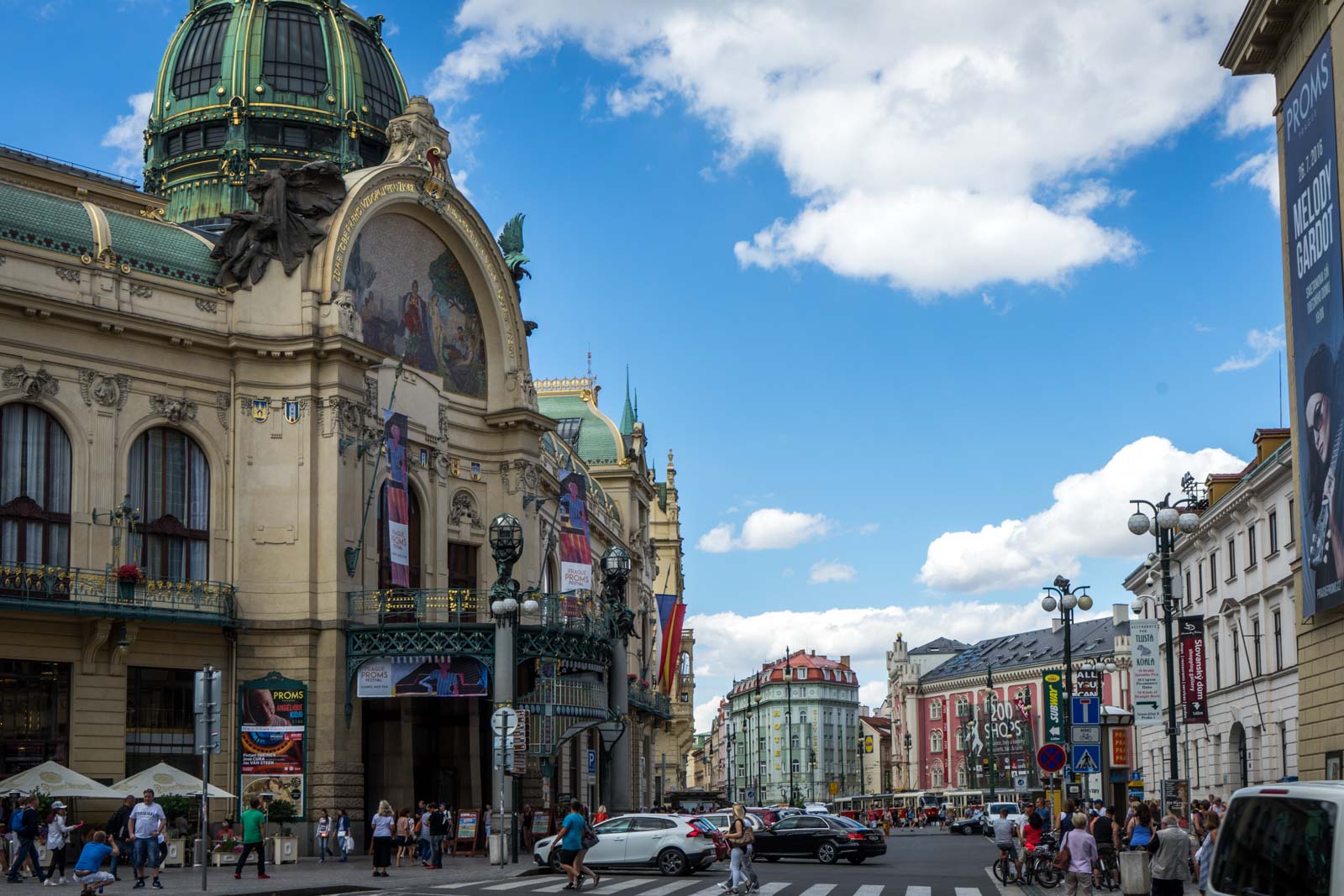 From here, head down Na Prikope Street (which turns into a pedestrian mall) until you reach the bottom of Wenceslas Square. This is where I feel like old Prague starts with mix with new Prague.

It’s a historic gathering point, full of history from centuries ago and more recent political demonstrations. Yet it’s also where you’ll see the shopfronts for international chainstores and restaurants.

It’s here that I’ll stop giving you specific recommendations and suggest one of two things.

The first is to walk up Wenceslas Square to the National Museum. The main historic building is close for renovations for at least another year but the new building next door is open.

The other option is to head west through all the little back streets of the Old Town. There are less tourists here (relatively) and you’ll find some great local restaurants and cafes to take a break. 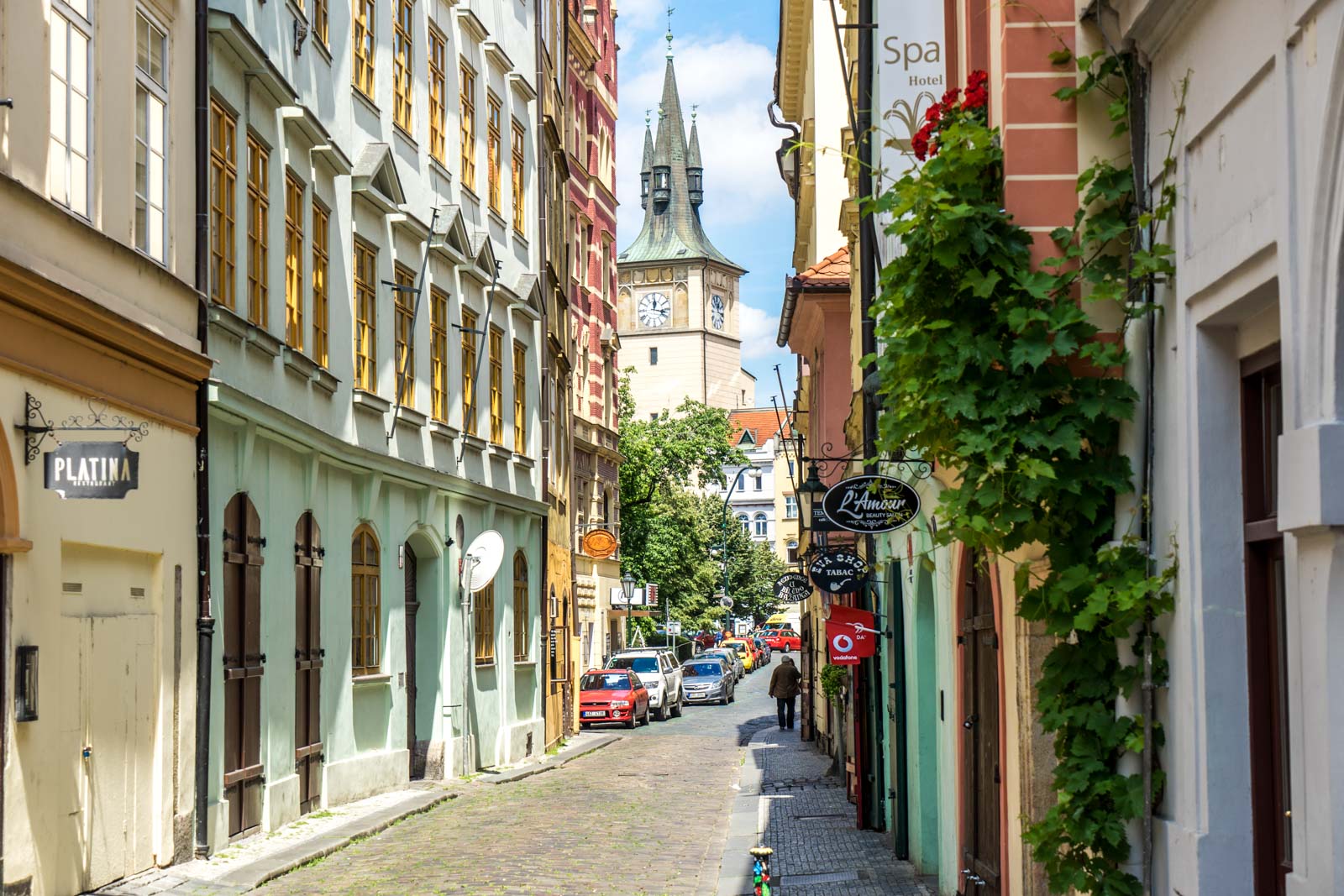 Although I hope these tips for exploring by yourself are useful, you may prefer to do something in a more organised fashion. Here are a few suggestions that I have for Prague:

Ultimately, despite all of these tips, that’s my favourite thing to do in Prague – to get lost. It’s not just the landmarks that are impressive, it’s almost every building, even if they appear insignificant. They all have character and they all have history.

Yet the historic part of the city is still full of life so the stories of the streets are constantly evolving. By being here and actively exploring it, you can be a part of the story yourself. This is what I underestimated about Prague and why I wish I had come sooner.

If you’re looking for a budget option, I would suggest the Post Hostel which is modern and friendly.
For something good value and a bit local, Family Lorenz & Coffee House is a great place.
For a cool and stylish option, you should try Design Hotel Jewel Prague.
And if you want to splurge for somewhere really cool, have a look at the BoHo Prague Hotel.