Slowly. Just a little. He gradually opens his eyes. He looks around, lazily surveying the scene before him.

Presumably the tree is the same and the walls are the same. The blurry shadows of people seen through dozy eyes look a bit different.

But new people coming in here is normal. Everything seems in place and he closes his eyes again and drifts off.

This is life for a sloth here at the Sloth Sanctuary on the Caribbean coast of Costa Rica. It is the refuge for local animals that have been injured or orphaned and need some gentle care. “It came on completely not under our control,” owner Judy Avey-Arroyo explains.

Judy is American and she started the sanctuary with her late Costa Rican husband. It happened when they were setting up a hotel for birdwatchers – but animal welfare was never part of the original plan. It was all because of Buttercup. “As we were building the hotel, Buttercup was rescued by some neighbour girls,” Judy points to the gentle-looking sloth hanging in a basket near us.

“Her mother had been killed by a car. They brought her here and we didn’t know what to do with her so we tried to place her where we thought someone would know more about sloths… and no one knew. No one wanted the responsibility so it fell to my husband and I.”

“And she thrived and two years later another sloth came, and then another one and soon we just kind of gave in to it and decided this is what we’re going to do, is rescue sloths and rehabilitate them.” The sanctuary grew in reputation over the years. The plan to build the hotel for birdwatchers was put on the backburner and instead they opened their arms to these beautiful and docile natives of Costa Rica.

The Sloth Sanctuary is now the first place the locals bring injured animals they find. It means a lot of work. “A normal day starts at six o’clock in the morning,” Judy tells me.

“My staff is here, they’re cleaning out the enclosures, they’re monitoring what the sloths have eaten overnight what they’ve eliminated, all those details are very important.”

“The sloths are then fed, cared for – my veterinarian is on duty six days a week. And between all of that we receive guests and show them around.” Today I’m one of the guests. I’ve turned up without a booking and it’s unusually busy with a local school group which has fundraised all year to come here. But a tour for tourists is also about to start and I join two other visitors on that.

The Sloth Sanctuary is a family affair. It’s Judy’s daughter who greeted me at the entrance and now it’s her grandson, Jeffery Rochte, who’s leading the tour.

He’s 28 years old and has spent the past 9 years in Costa Rica working at the sanctuary. He introduces us to the sloths as if they’re also part of the family. In some ways, they are.

They all live together and experience each other’s highs and lows. Some of the older ones have been here since they were babies – brought in as young orphans and unable to return to the wild because they’ve never learnt to fend for themselves. At the nursery we see some of the new arrivals. These small little bundles of fur and noses have come in for various reasons.

Some were healthy but alone. Others were injured or ill.

The biggest threats for sloths in Costa Rica are electrocution from powerlines, dog attacks, car accidents or, would you believe it, violence from children who don’t understand what they are.

“We’re encroaching into their territory and this is what’s happening to them,” Judy says with a tinge of sadness.

“They’ve survived 65 million years, withstanding ice ages and tropical storms and moving up and down the continents of the Americas and surviving. All of a sudden we come into the picture and they’re in trouble.” Unfortunately it’s a story that’s all too common. The reach of man is sweeping aside millions of years of natural order.

Individuals like Judy Avey-Arroyo and her family are trying to restore some balance, though.

The Sloth Sanctuary receives no funding from outside organisations. The main sources of income are from visitors and private donations. Using that money and a lot of devotion, the sanctuary has reintroduced into the wild about 120 sloths over the past 15 years. Over that time, Judy has come to understand the animal better than most people. But they still amaze her.

“They don’t obey the laws of other animals,” she says.

“They’re totally different from other animals. Their medical needs, how they survive in the wild is completely different. We can’t pattern or guess how they might react to different things.” 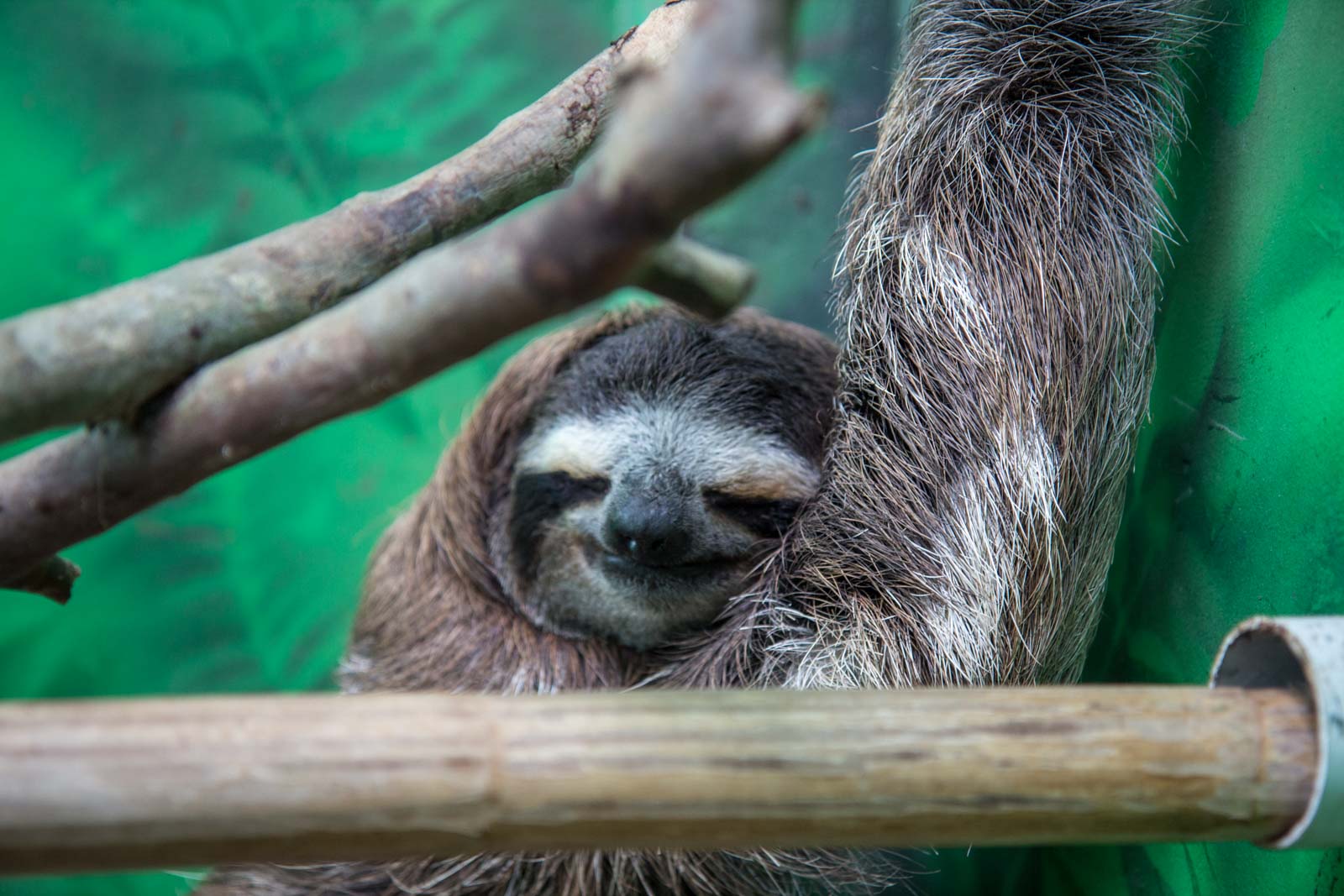 “What we’ve learnt is that they’re the original zen masters. They have gotten life down to a fine art. I mean, they lay in the branches and bask in the sun, reach out to pull a leaf to their mouth.”

“We think they’re from another galaxy,” Judy laughs.

Maybe they are… who knows? All we do know is that they’re here on our planet. For now.

>> More info here about the Sloth Sanctuary at Limon