We’re battling against the current as we head up the river. In a long wooden dugout – carved out of one single tree – two members of the indigenous Bribri tribe are taking me to one of their small communities at the very edge of Costa Rica, alongside the border with Panama.

It takes us about an hour to navigate our way along the waterway, pushing off rocks and avoiding the strongest parts of the fast-flowing river. But the efforts to reach the settlement are nothing compared to the struggles these original people have had to keep their land and their heritage. 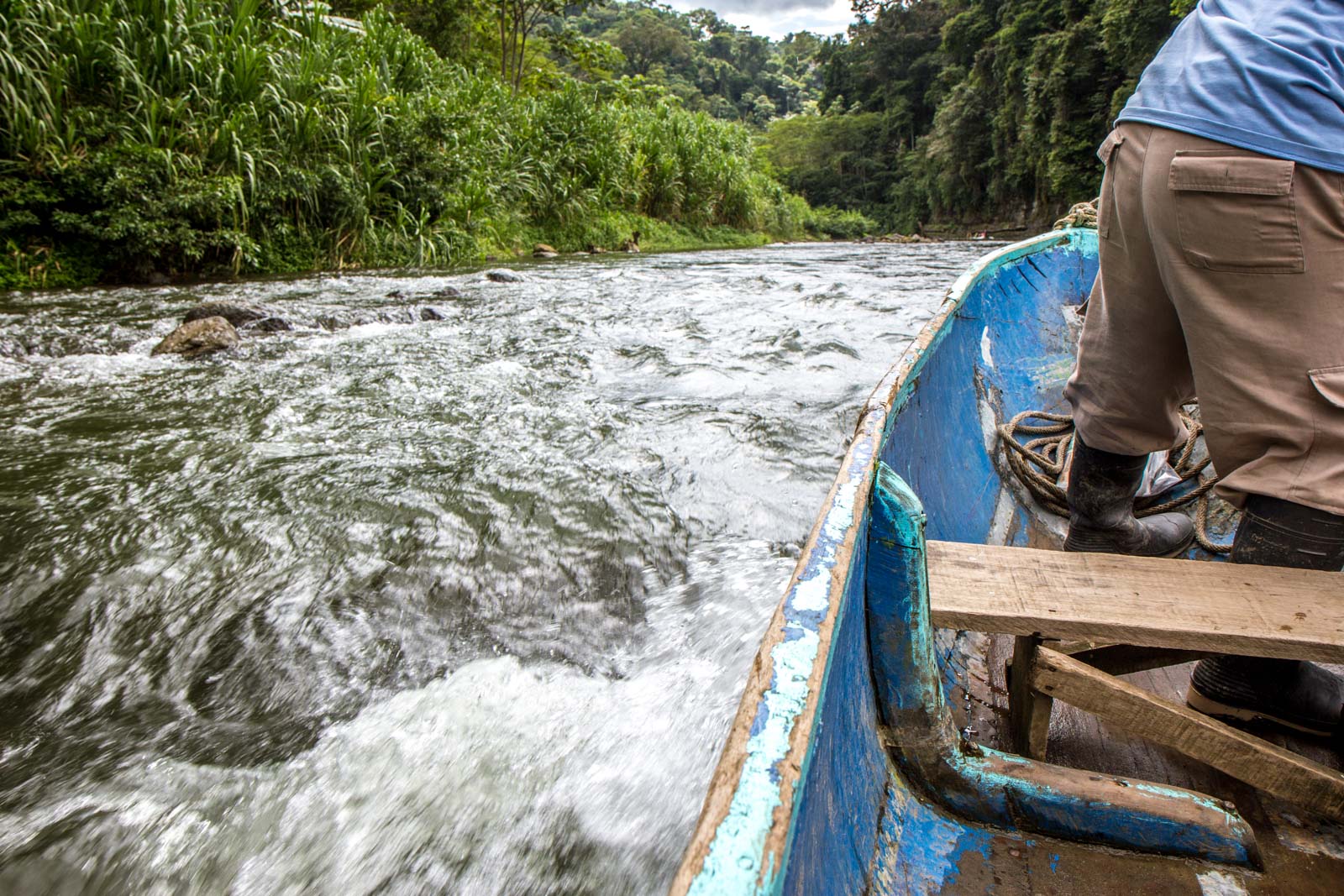 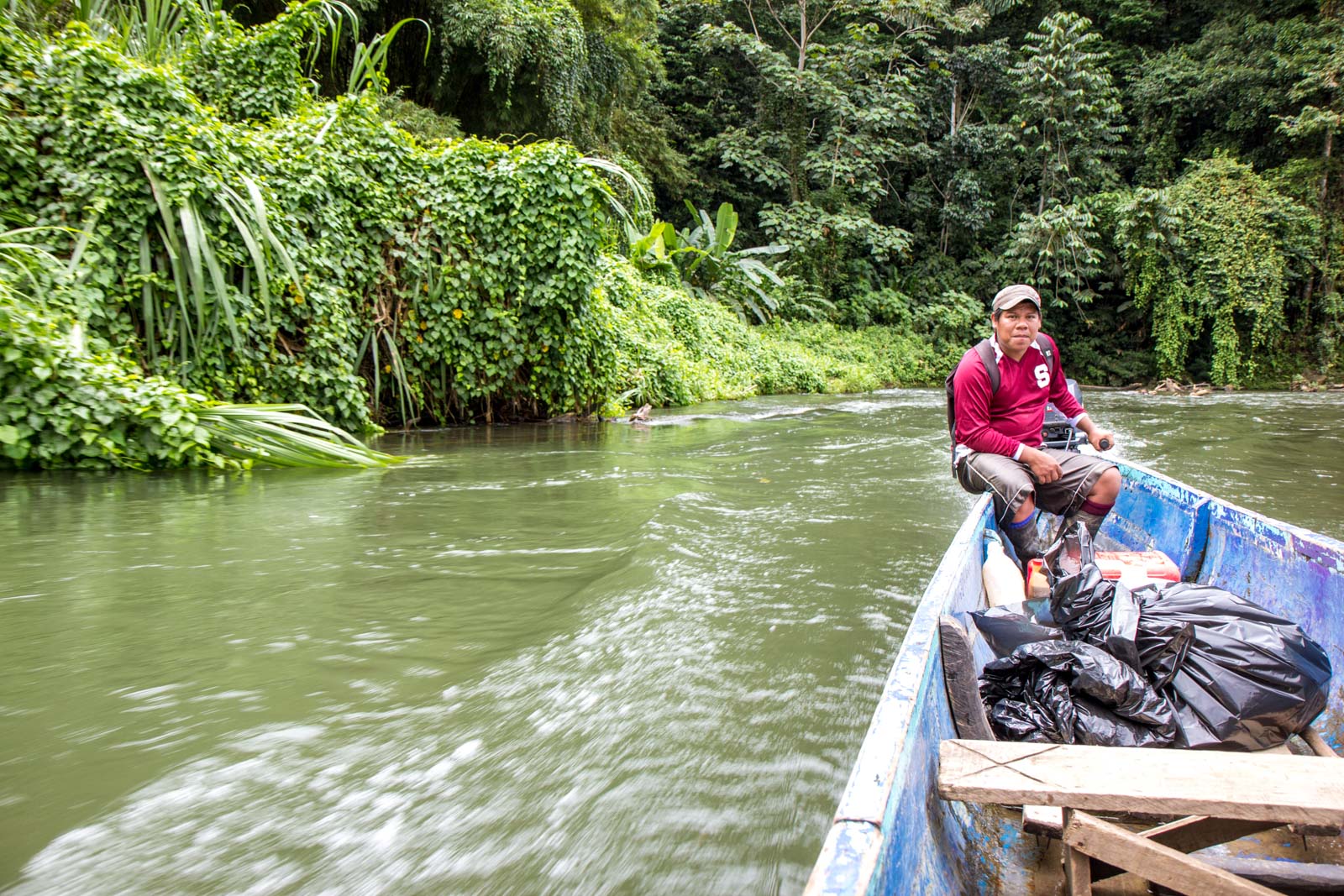 Like many indigenous races across the world, the Bribri people have become disenfranchised because of the spread of colonialism.

Spanish and other Western immigrants treated them like primitive natives and they were denied the same rights as other residents of Costa Rica. That created a spiral of poverty and despair.

“20 years ago the community was moving to different areas because in this area they have no jobs, no nothing,” local indigenous man, Cesar Selles, tells me.

“So most of the people move away from the Aboriginal reserve and they work in the cities. We don’t like cities, the noise of the cities is completely different and we can feel freedom on these fields that is not the same freedom I felt when I lived in San Jose.” 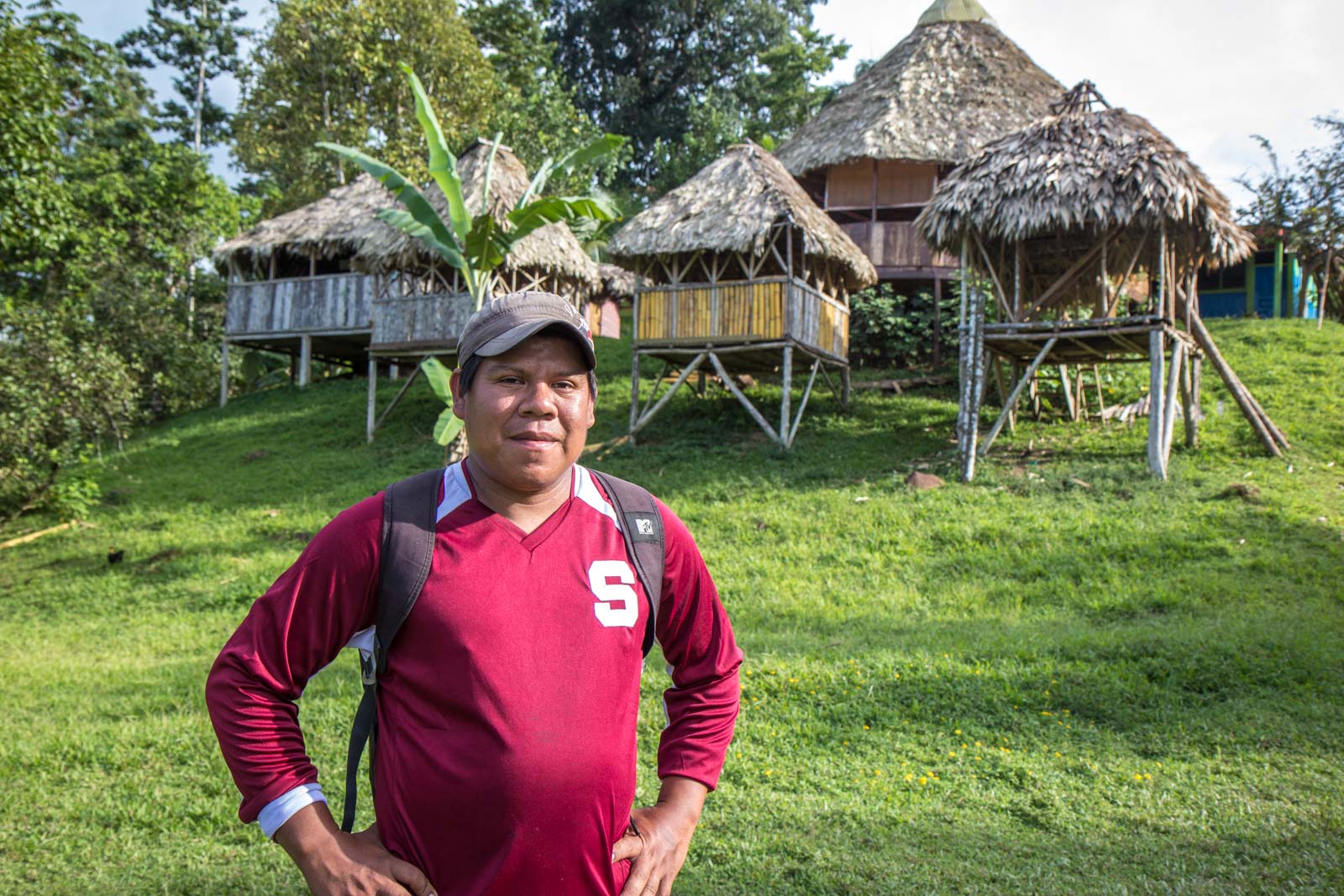 He, along with his mother, started a project to bring in new funds to the Bribri people and stop the exodus of young men looking for work and a future. And it’s worked. 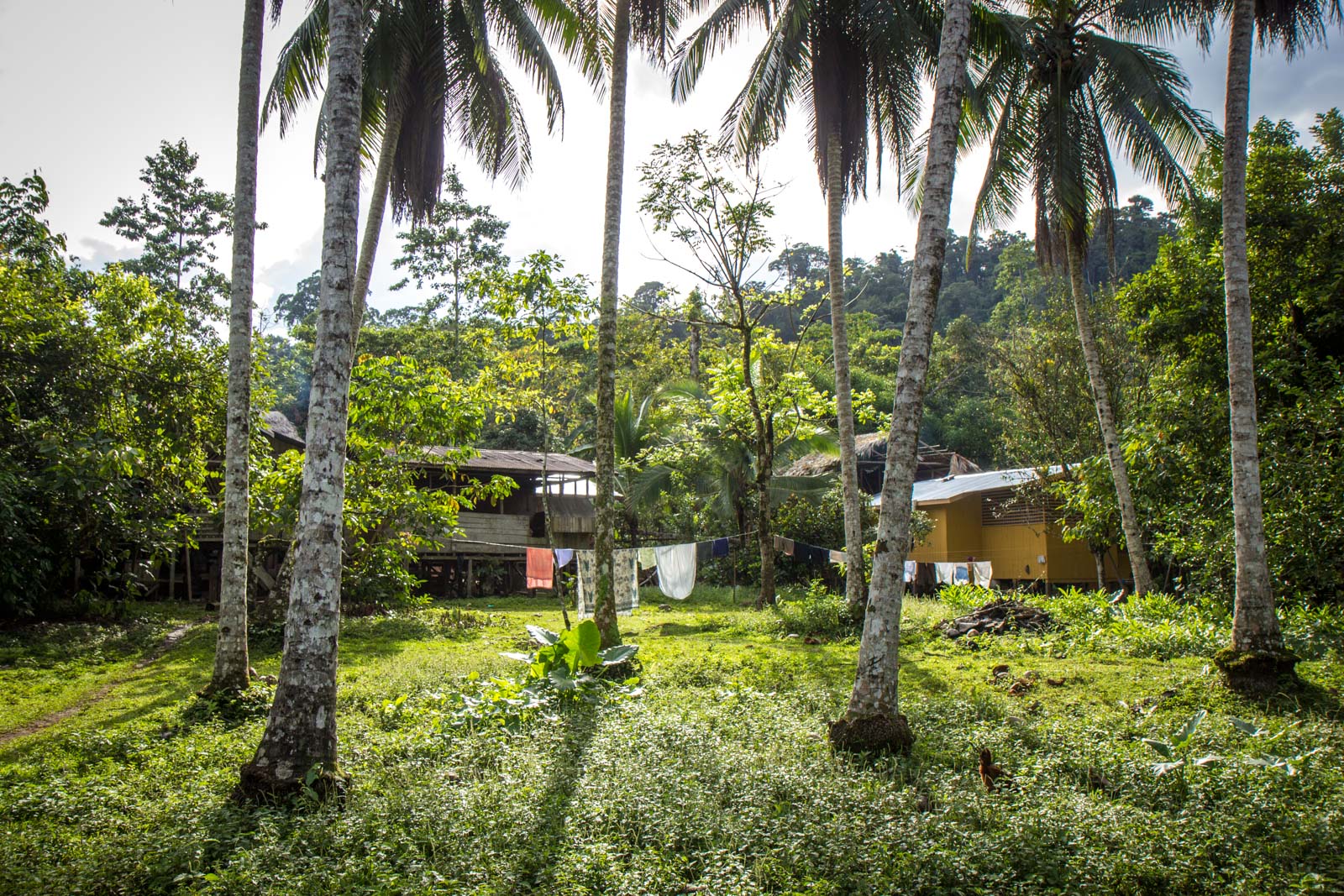 Cesar is 30 years old and was just 11 when his mother came up with the idea to allow tourists to visit their community, here in the Yorkin Indigenous Reserve. They started it together and over the years it has developed and grown.

With the project, they allow in a small number of visitors each day to experience life in the community. 40 families take it in turns to host the tourists, cook them meals and talk about their culture.

>> Book a community tour for yourself here

There are only 300 people in the whole community but the area feels much larger. As Cesar walks me through, he points at wooden huts of varying sizes.

Each of these is a family home. They’re not all clumped together, though. The tribe likes to live close to each other but not right next to each other. It could easily be a 20 minute walk between some houses. 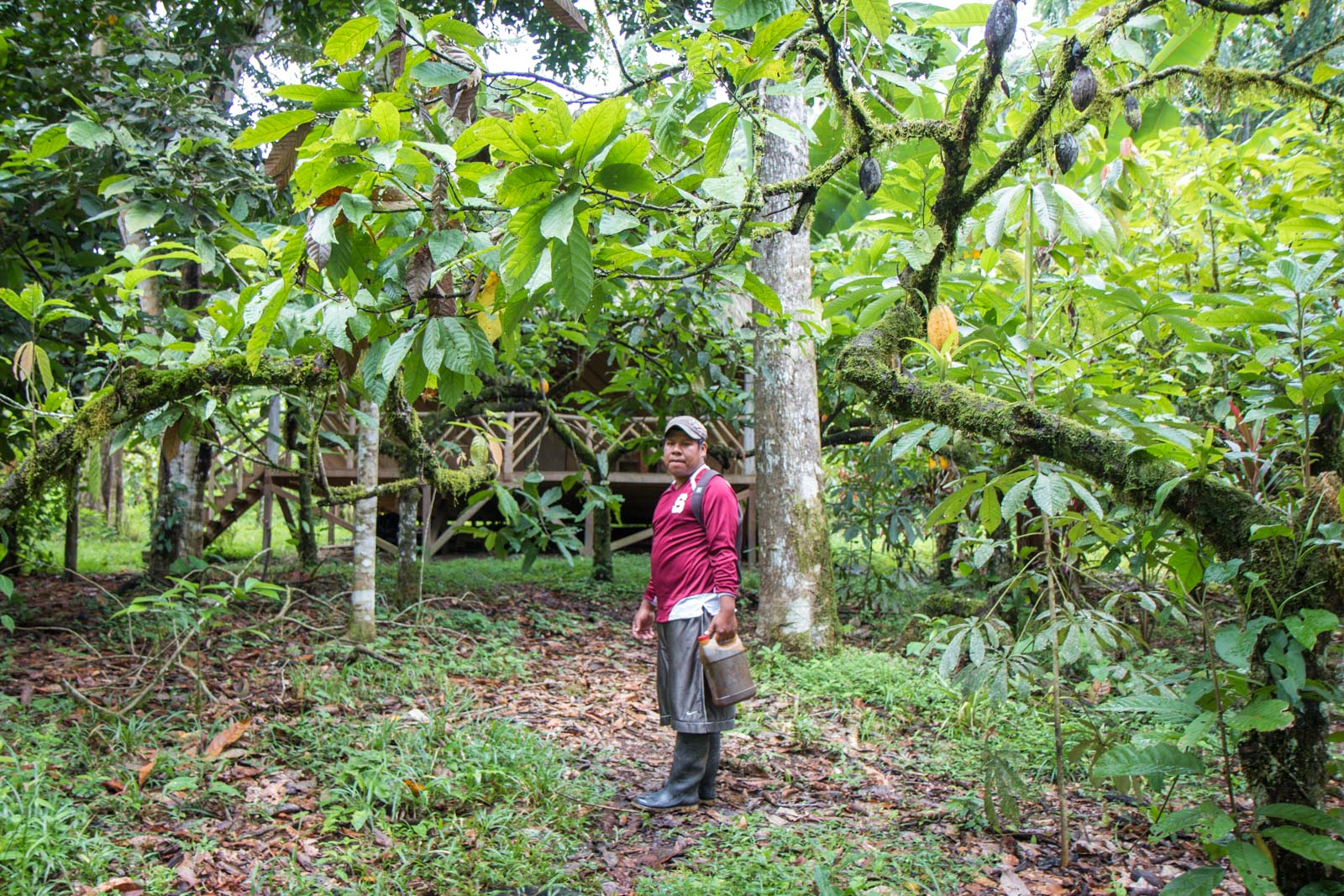 The riverfront buildings at the entrance to the community include a primary school, made up of several small huts perched on the edge of a hill. But further in – through sweaty jungle, across slippery mud, past lush green fruit trees – is the secondary school.

It’s here that Cesar remembers how the community used to be. He tells me a story about how each child was given a pen at the start of the year and they had to treat it like gold because there were no spares. All the children were so careful not to write too hard or to drop it anywhere. Sitting on a balcony in the building the community has dedicated to hosting visitors, I ask Cesar what it’s like to grow up as child here.

“When I was very young, I would go to the river and swim with my friends – and girlfriends too – and run through the fields hunting and eating fruits,” he says.

“When I got a day off I would play football… but the life of the Aboriginals is more related to the parents. So most of the time I had to be ready about 3 in the morning when my father would leave for the fields. So I would walk with my father to the fields and work, normally cutting bananas or this kind of thing.”

“After that we would come back and sometimes I had free time or sometimes I was completely exhausted with no time for play but there was always time to go to the river for fishing or this kind of thing.” Agriculture has been the lifeblood of the indigenous communities for generations. The waterways flow through the natural reserves of this part of the country – one river even forming the border with Panama – and they create a fertile garden for the local produce to grow.

Bananas and cacao beans are the two main products which the locals harvest and then sell to large companies.

They don’t make a lot of money from it. The cacao beans, which are used to make some of the world’s finest chocolates, sell for 90 cents a kilogram if they’re freshly-picked. This is why the added income from tourism is a considerable supplement. 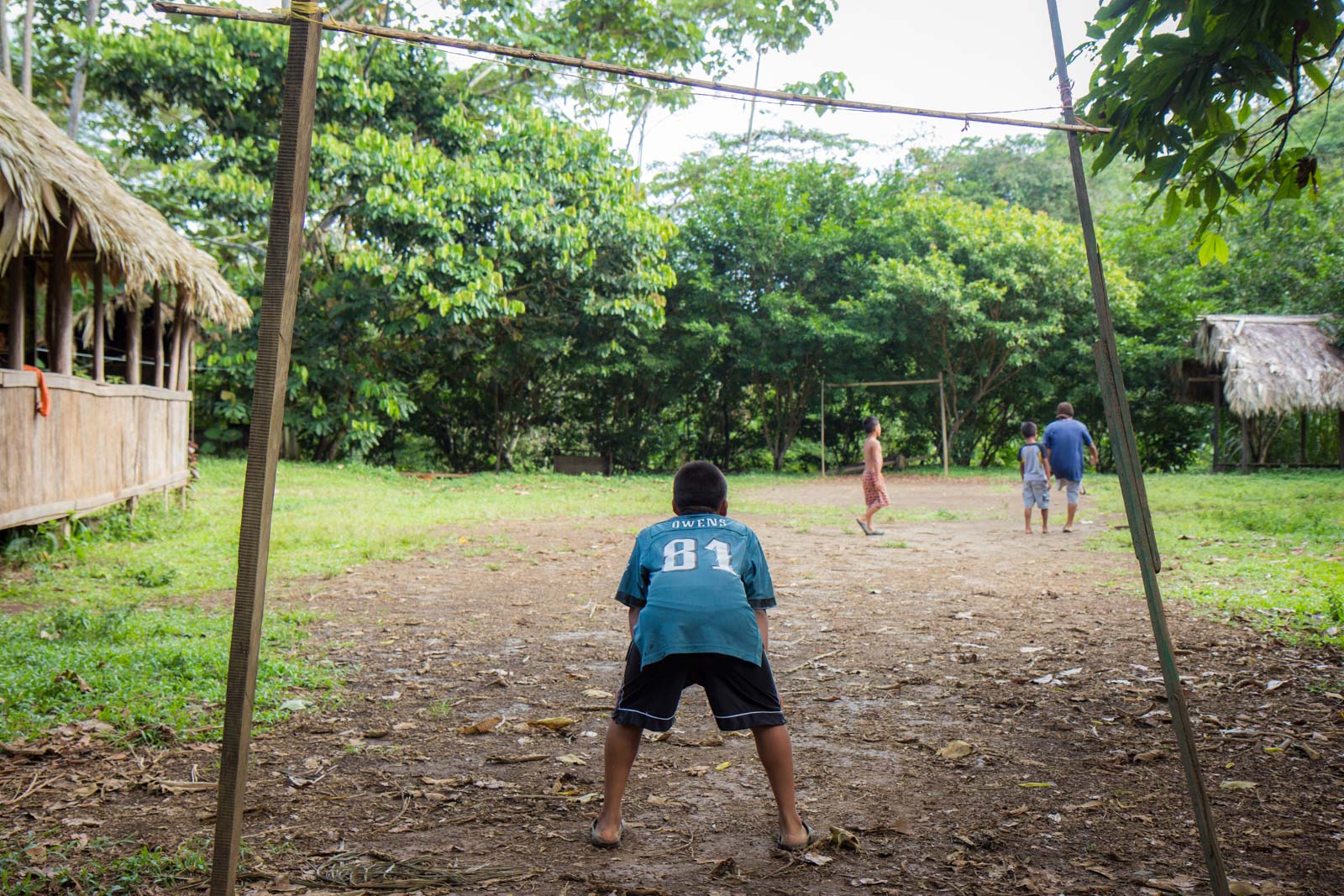 But it’s not about making a fortune. All the profit the community makes from tourism is invested into health treatments, infrastructure and the local school.

“The main pillars of the organisation is to protect the traditions, to go on according with mother nature, and keep the people working together,” Cesar explains.

“We are not thinking about money. The most important thing is that the organisation works for the community and makes the community self-sufficient but with the idea that we know we can’t be alone so we can keep some different things from outside. But the three main things we want to keep are our traditions, our culture and the health of the community.” 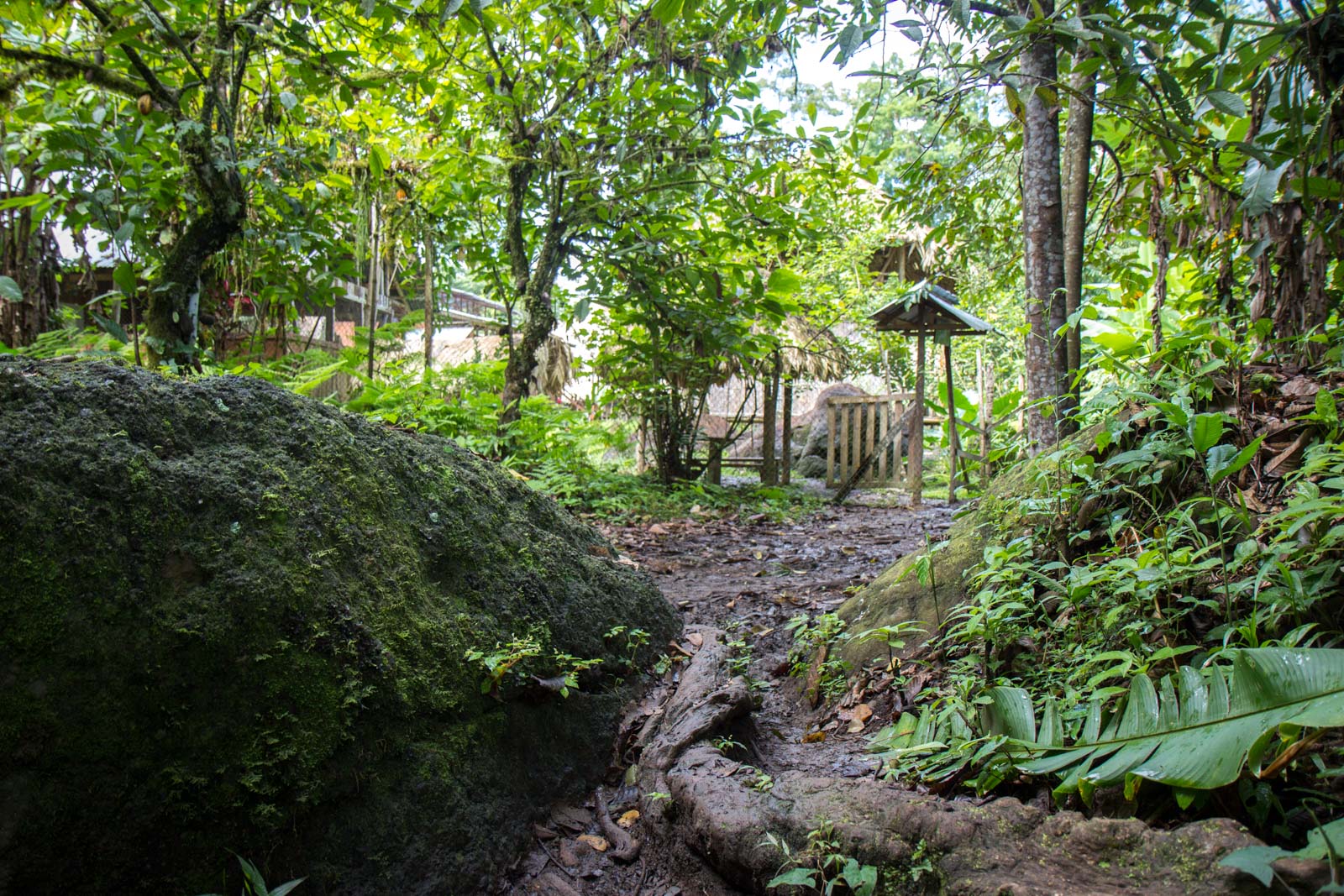 It can sometimes be hard to think about traditional cultures in the context of a modern globalised world. When you look at other countries, it seems the traits we share are starting to overtake the ones we once thought unique.

But the physical isolation of the Bribri people makes it easier for them to maintain their heritage – if they want to.

“We’re looking for those traditions forgotten of the past,” Cesar says, “like the dance.”

“They have a different kind of dance people are not doing today because for several years we were weak and those traditions were lost. So now we are looking backwards and looking for those traditions to recover.”

“Also the food… and one of the main things we want to keep is the language. For many years the teachers who came to give lessons at the school came from other areas so they didn’t speak Bribri. So we got forbidden to speak Bribri at the schools and we had to speak Spanish. So for that reason many of the teenagers of the community, they don’t speak well Bribri.” 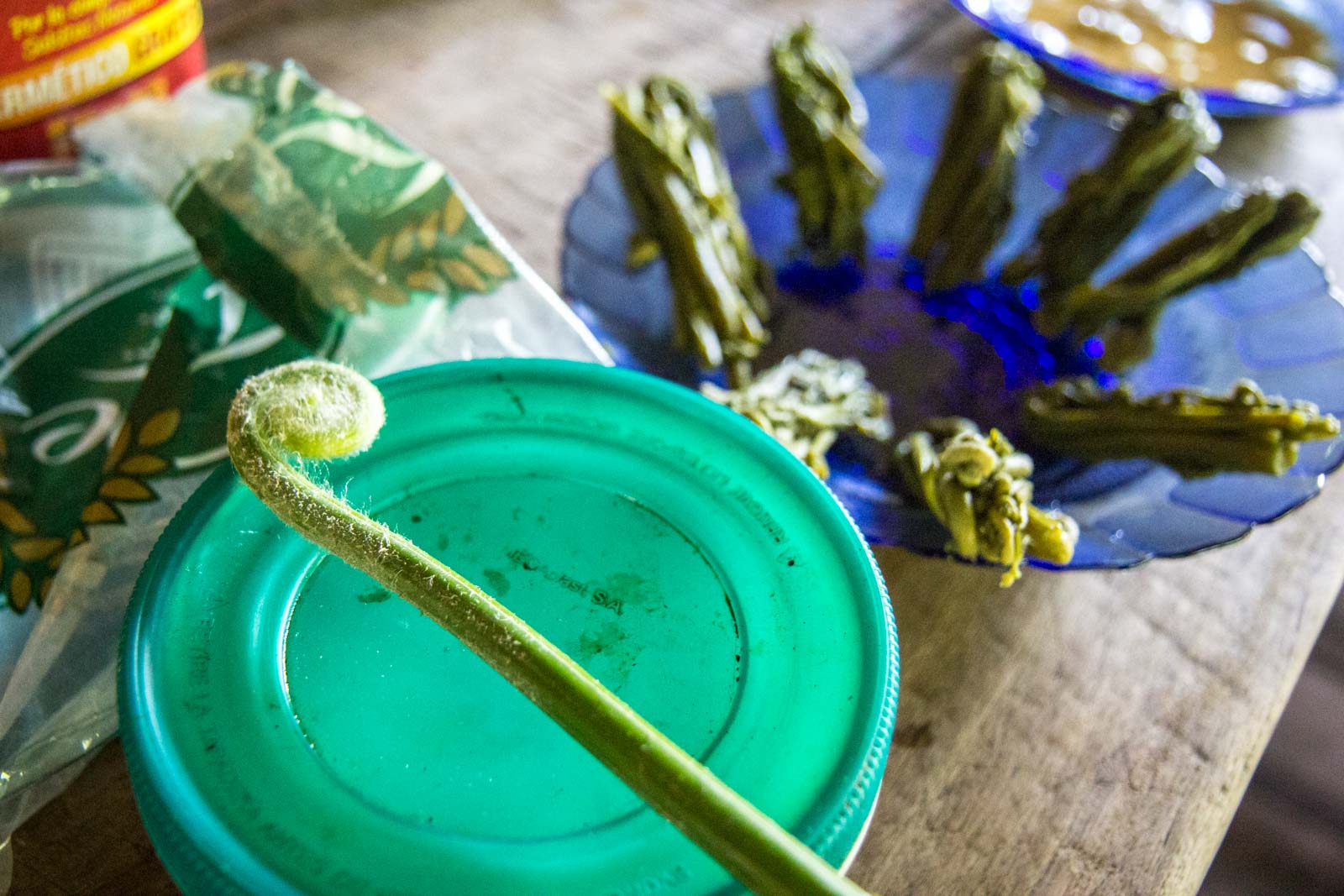 Most of my conversation with Cesar has been over lunch, which has been prepared for us by one of the community’s families. It’s their turn in the rotation and while the husband and wife work in the kitchen, their teenage children pop in and out.

The Bribri are a matriarchal society, so it’s the woman who takes the lead today. Only she is able to perform the ceremony to turn the dried cacao beans into a smooth and rich chocolate drink, for instance. 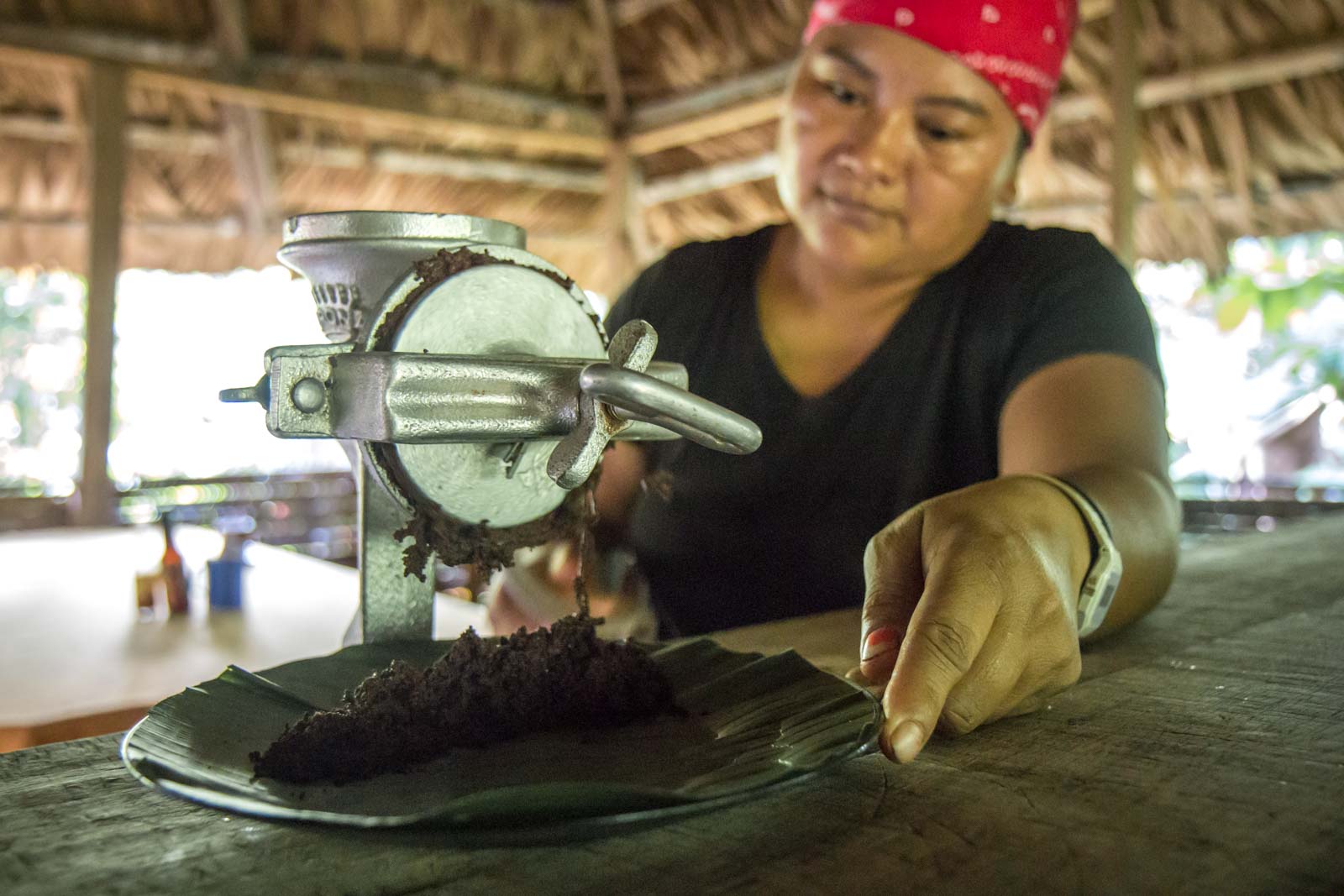 The meal is delicious. Absolutely delicious. But it’s not what you would expect to eat anywhere else.

There are Costa Rican lentils, fried ferns, boiled palm and tropical pumpkin. Maybe some people would feel (unjustifiably) embarrassed serving such an odd assortment of local plants for lunch to a foreign visitor. But not here. It’s the local culture… and that’s the whole point. 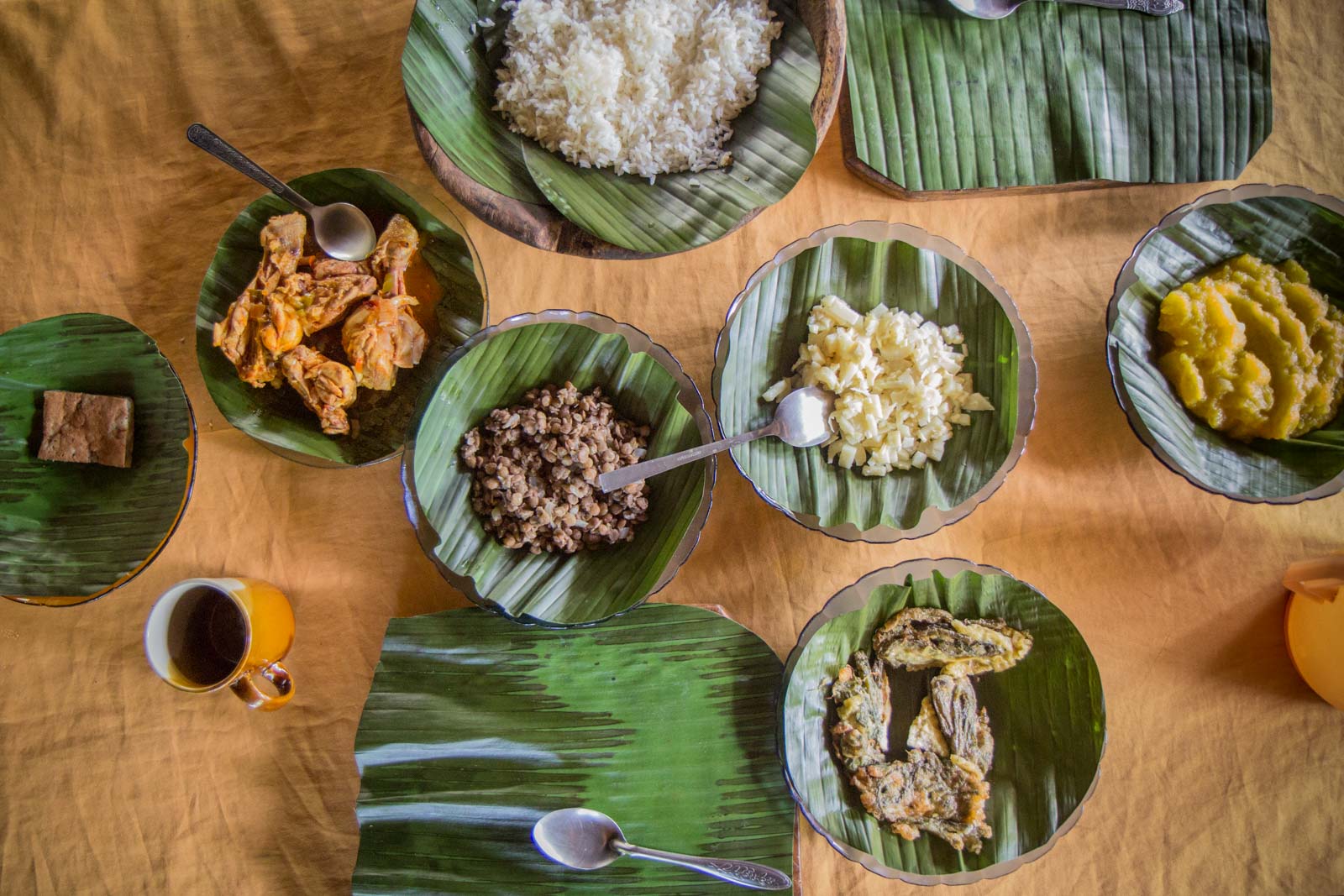 “The most important thing is that I want the world to see us how we are – Aboriginals,” Cesar stresses. 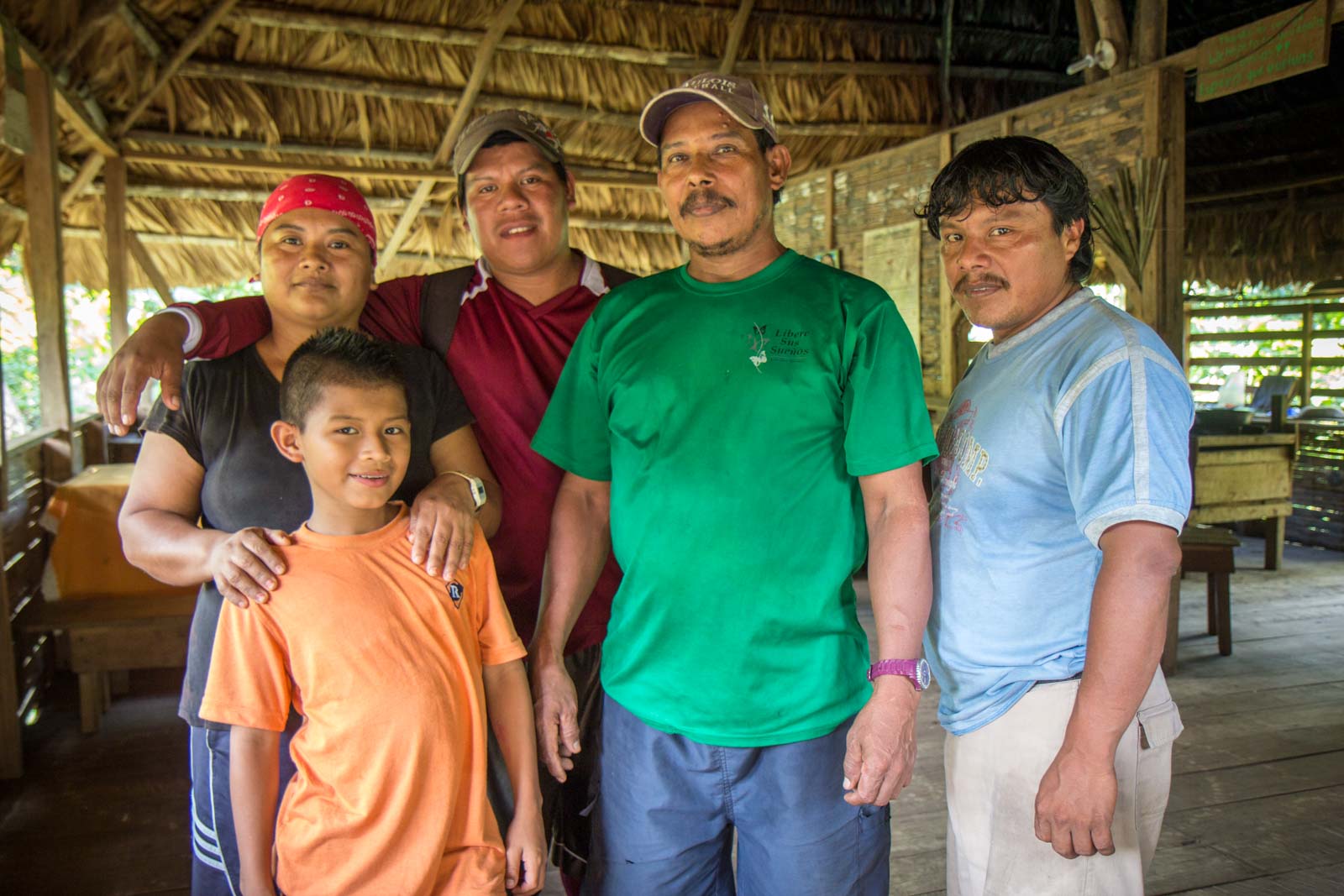