“I am a man of the forest,” Pekka Vaananen declares as he introduces himself.

He’s a rugged looking Finn, with bright narrow eyes and rough skin on his face that shows his age. He smiles broadly and welcomes me to his home.

Well, I say ‘home’ but in reality this is more a compound for winter fun. And Pekka may use this place to sleep and host visitors, but his spiritual home is in the trees around us.

“The forest is my friend and I feel it is the biggest lesson we can learn, that life is from the forest,” he tells me.

“Because the trees are in their places and they cannot move but we can move. We are connected to the forest in a way that we don’t normally understand. The forest and the trees are giving us the oxygen which we breathe. Without them we cannot exist.” 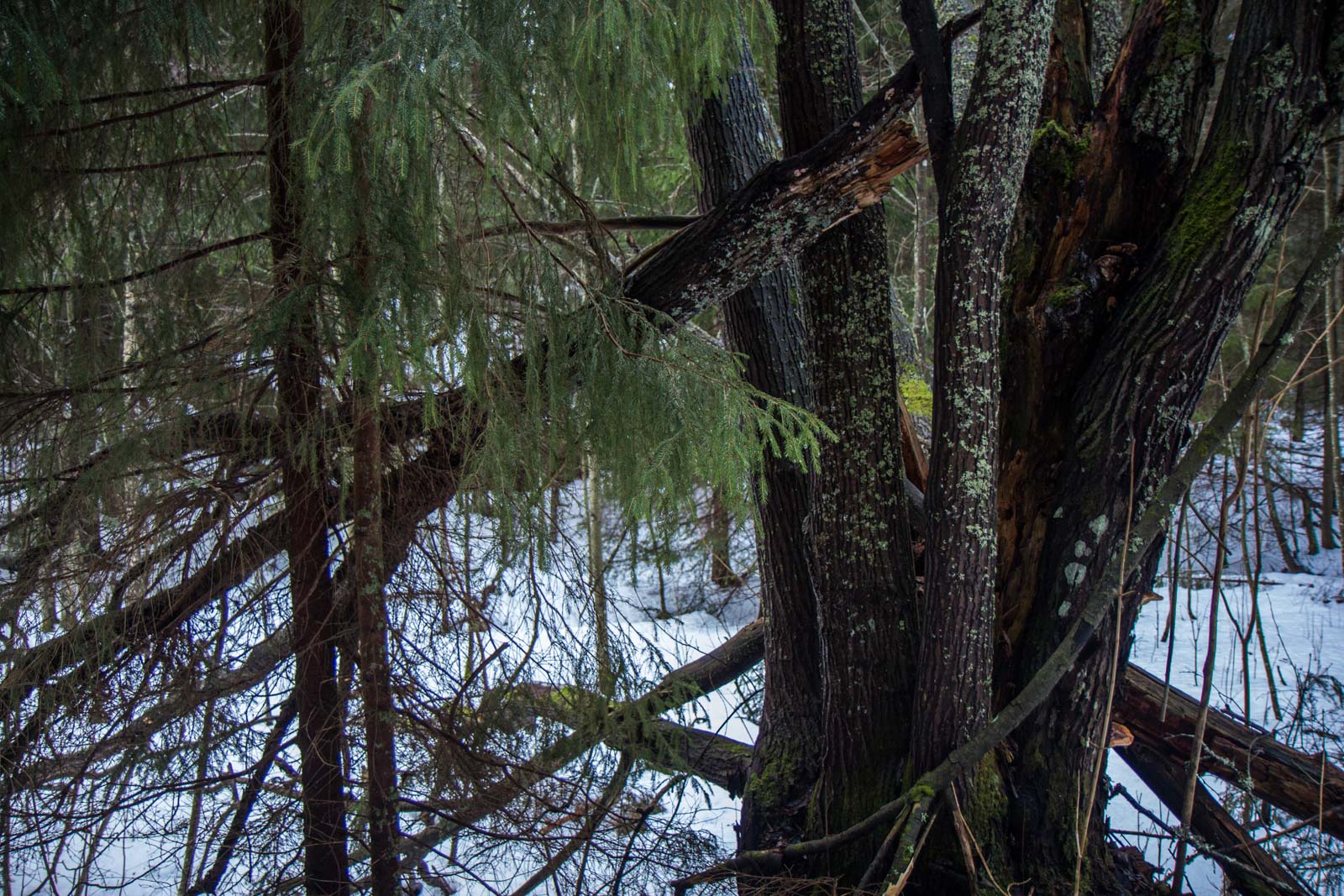 It’s a rather transcendental introduction but it doesn’t seem out of place. The ground is covered in snow and the trees all around seem to rise magically out of this frozen earth.

In the stillness and freshness of the Finnish winter, they give off an energy that I, as just a mere visitor, maybe can’t identify.

It’s been a busy couple of days for me and Pekka senses that. The first thing we do is walk the short distance to the traditional smokehouse-style cabin that you often find in the rural areas of Finland in these colder months.

Before we go in, he picks up two handfuls of snow and smashes it down on his head. He tells me to do the same. Now I should be awake, Pekka says with that big welcoming smile. 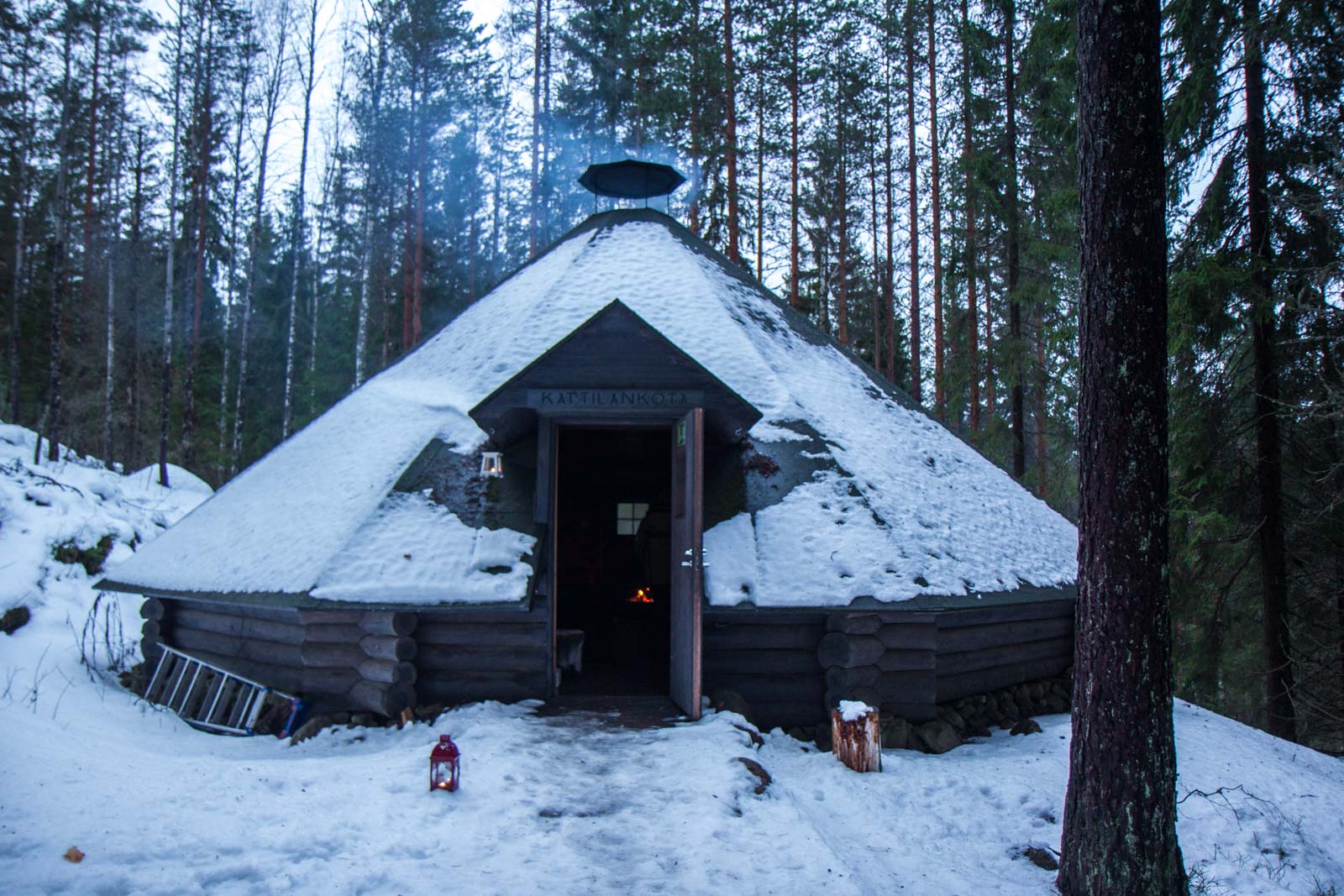 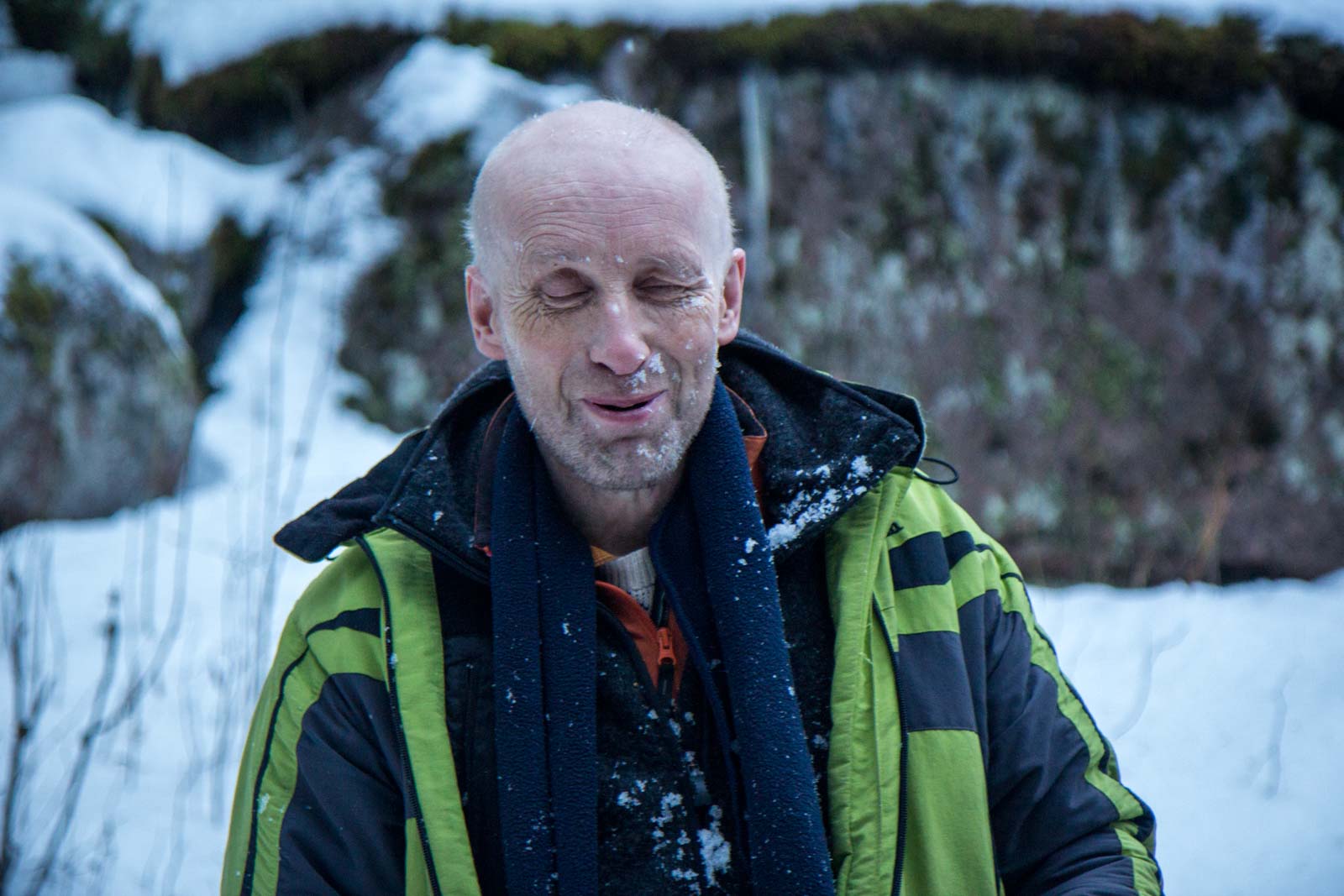 Inside the tent, it’s time for another ceremony of sorts. The fire is blazing in the centre, smoke rising up and out of the hole at the top.

It’s nice to have a bit of warmth after the cold and wet outside. I put my hands up to the flames but there’s barely time to relax before Pekka is pouring ground coffee onto my palms.

“You have loved ones who are not here,” he says in a way that makes me wonder whether he’s reading my mind.

In honour of them, in a flourish that makes me think of a wizard casting a spell, he throws the ground coffee onto the fire and bright sparks fill the room. I do the same.

When the sparks subside, my loved ones haven’t appeared. I start to form some doubts about Pekka’s magical abilities. 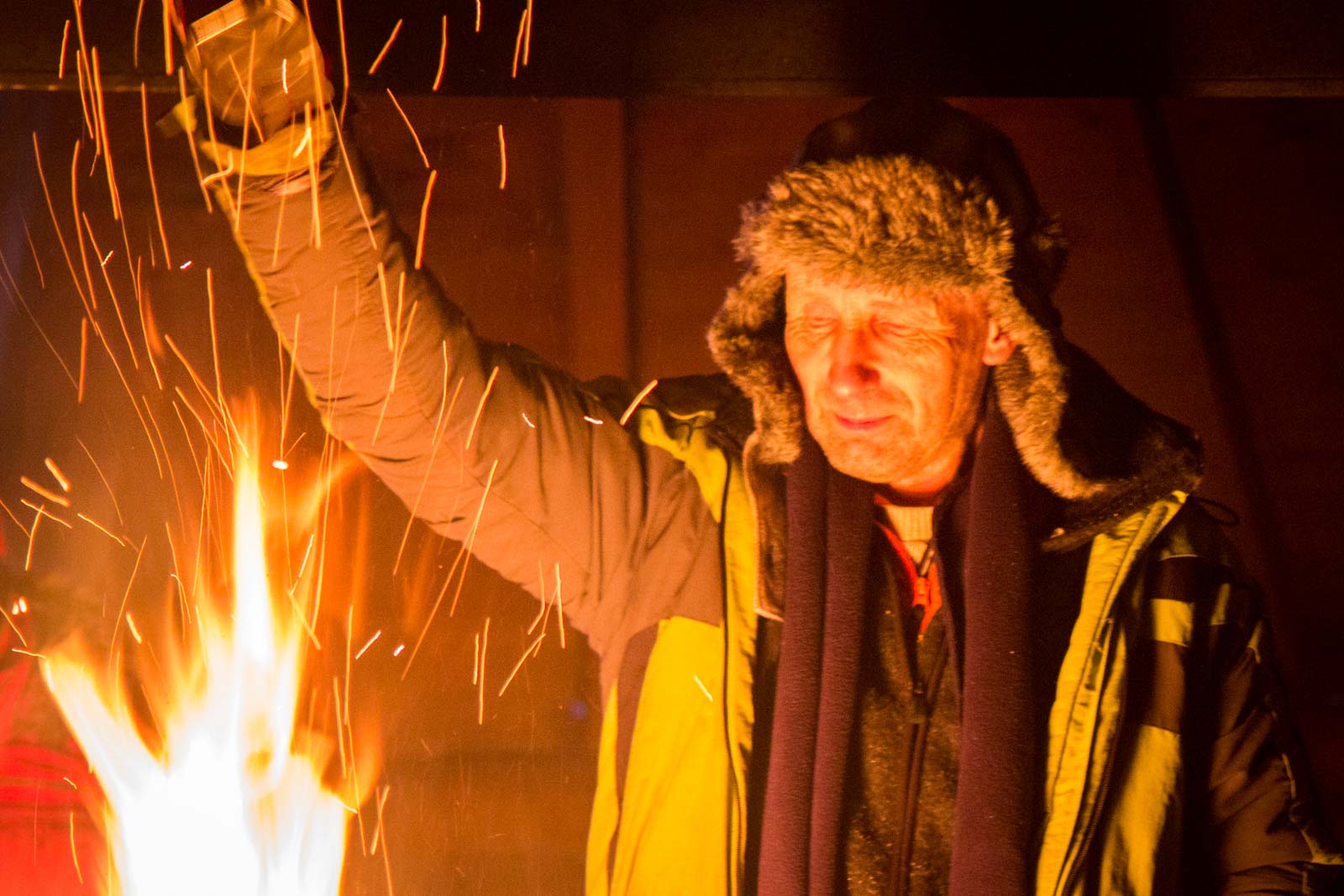 We’re not too far from Helsinki – about 30 minutes drive – and close to the city of Espoo, but it feels like we could be in the middle of nowhere. I find this magical – although it may not be Pekka’s doing directly.

Regardless, he has created this small business called Green Window which local and foreign visitors can use as a base to explore Finish nature just a short distance from the country’s capital. 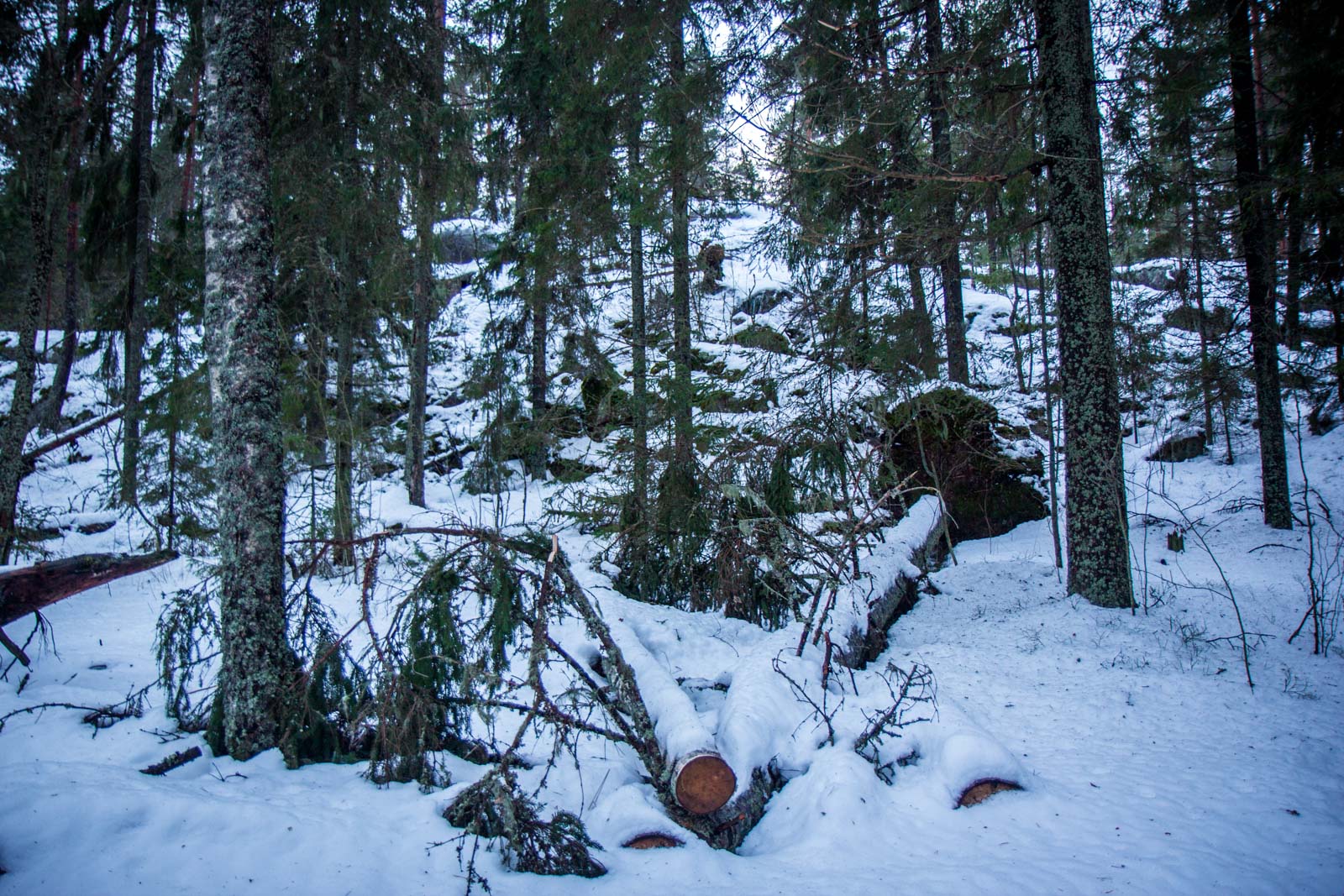 “I want people to come out to the forest,” he explains, “because the more people that come, the forest believes that they will then protect the forest.”

Together we spend the afternoon in the snow and ice. I learn how to play curling, try my hand at sledding and even walk out onto a frozen lake to drop a fishing line down a small hole. No bites, for the record. 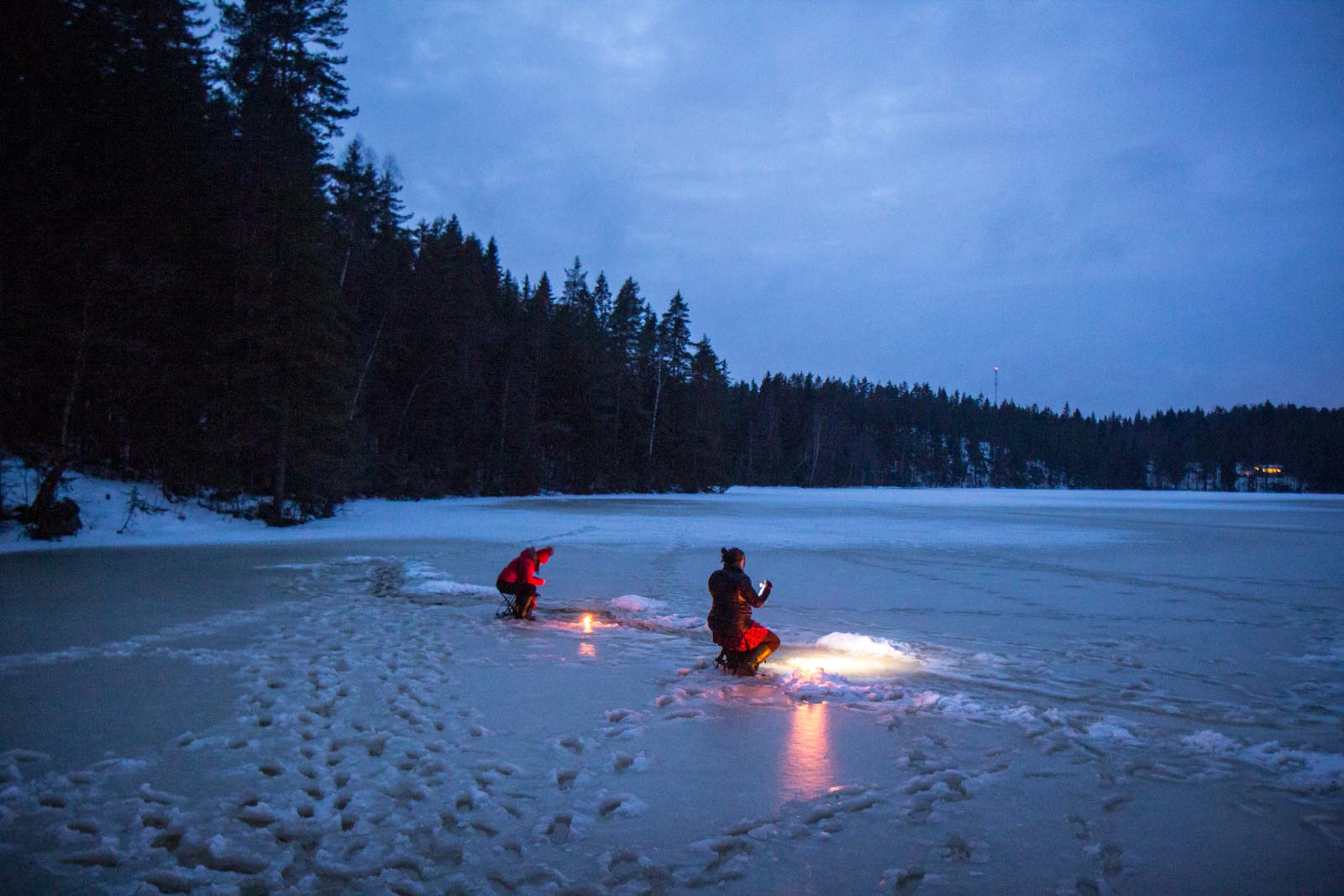 “Just relax,” Pekka says to me in the evening when I ask about the best way to enjoy this area.

“The forest doesn’t say you’re guilty of something. Just enjoy the tranquility. There are some values which have been like that forever. It doesn’t change, the people change.” 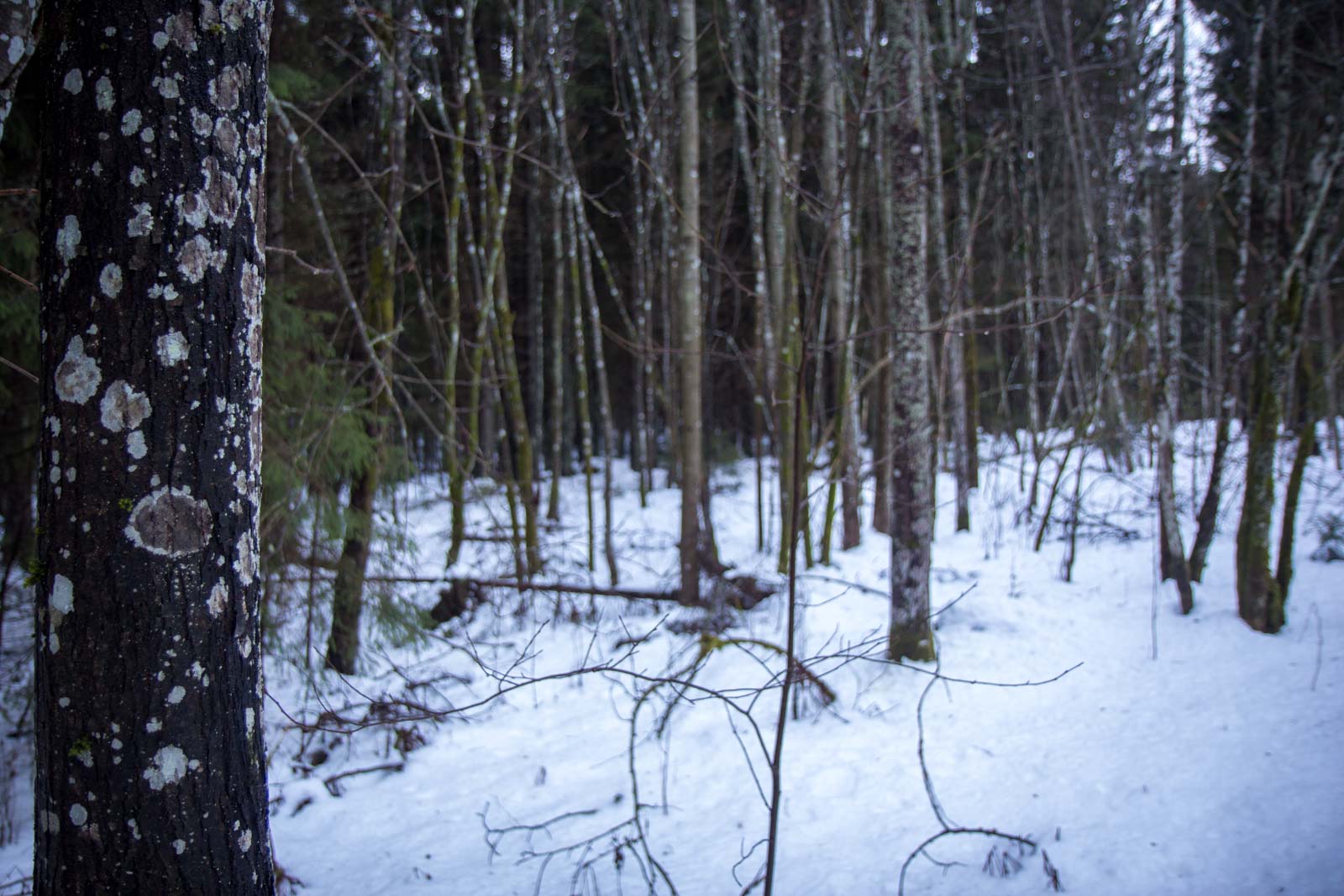 Perhaps this is a deeper way of thinking than I was expecting. It seems so apt, though.

This is my first time in Finland for winter and there is something unusually tranquil about it. For a country that is very proud of its silence, this is a whole new volume of nothingness.

The long dark nights make you look inside yourself rather than around you. Even during the days, the sun stays low in the sky and the soft light hits you right in the eyes. It’s never too bright and I wonder whether I’ve ever quite woken up from my dreams. 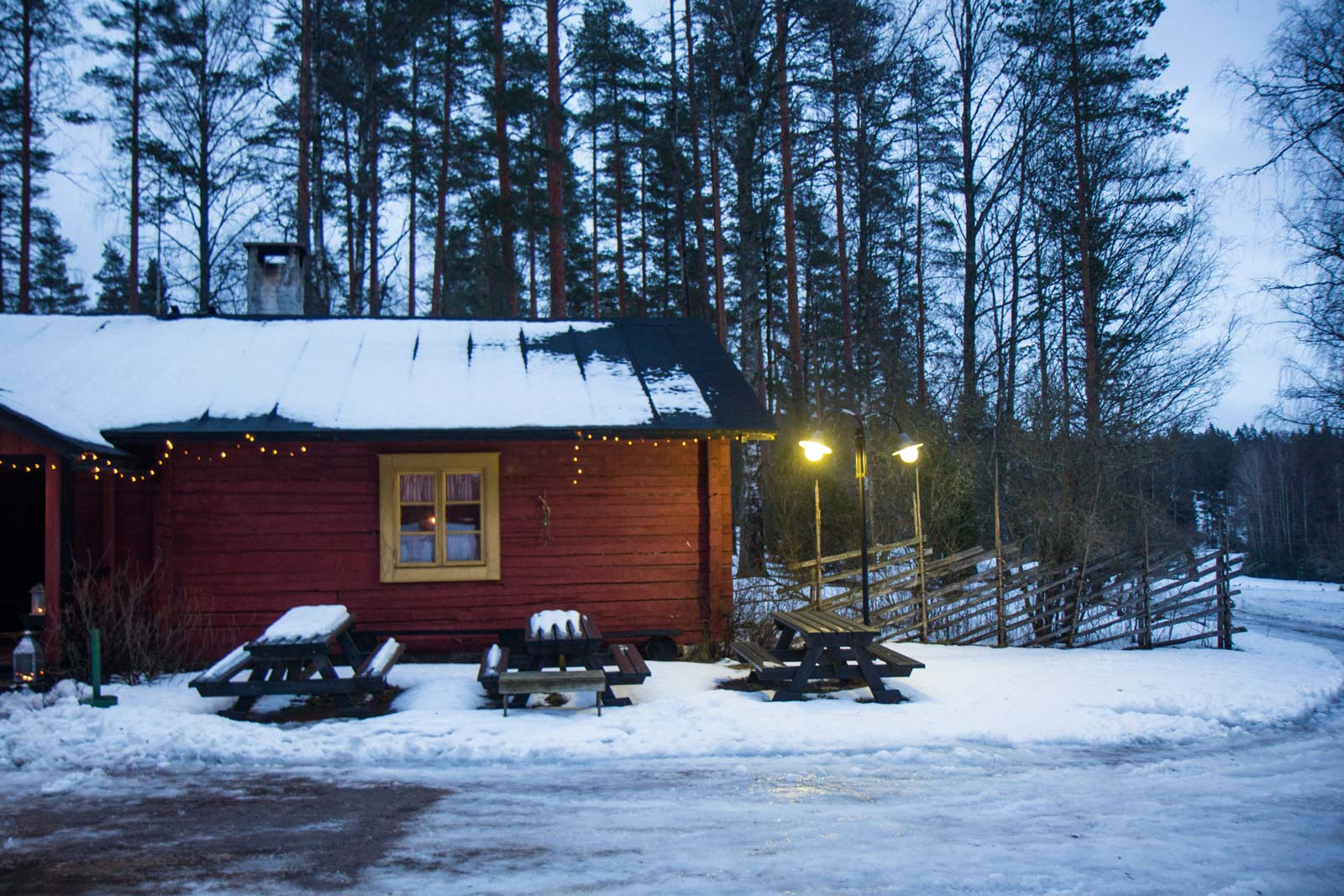 The morning after visiting Pekka at Green Window, I got out for an expedition on snow shoes with Eventure, another outdoor activity company close to Espoo and Helsinki.

Again, I find myself in the forests of Finland.

This time it’s in the beautiful Nuuksio National Park which is part of the green belt that surrounds the capital and gives the country’s native animals the ability to roam freely across the land without the interruption of human development. 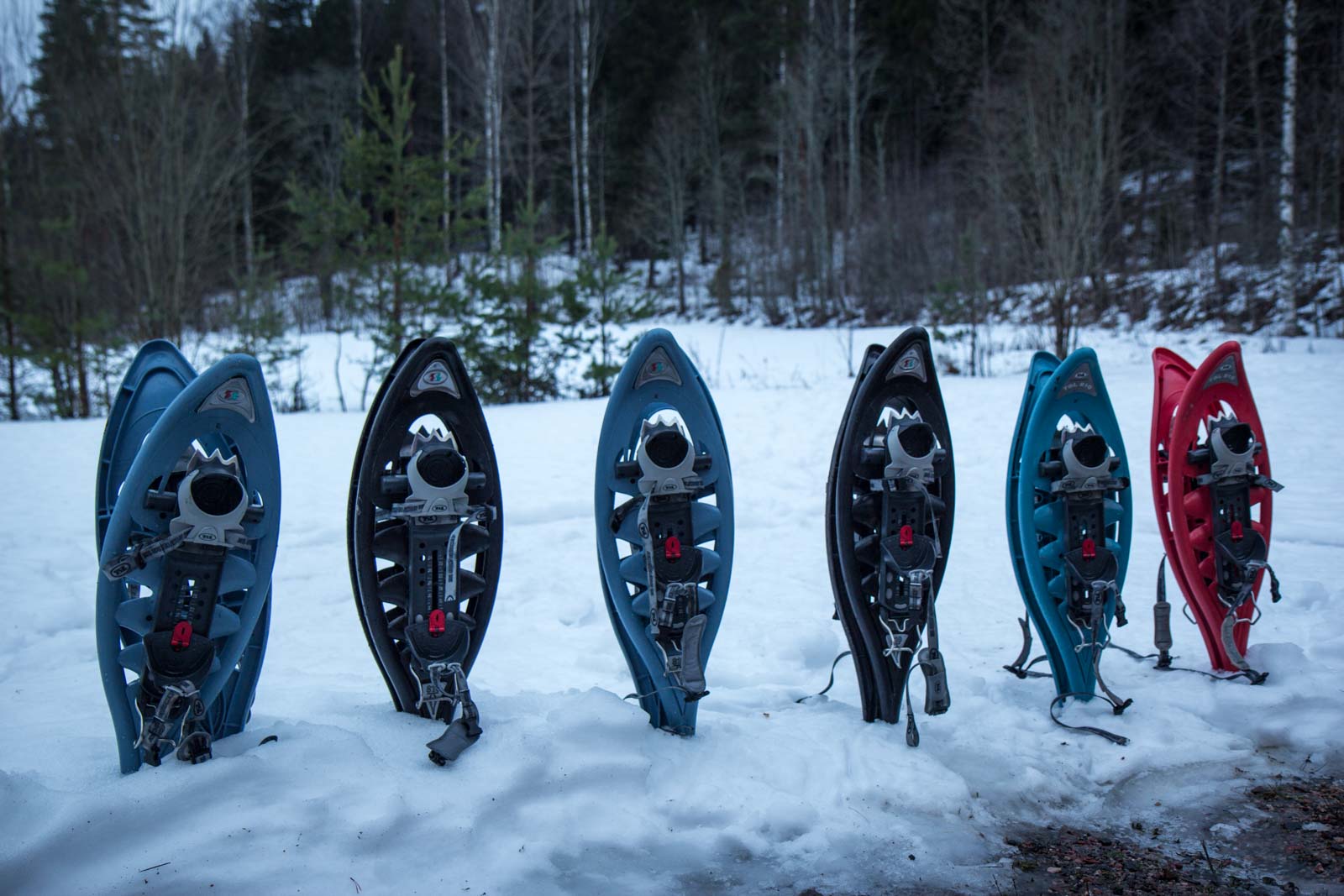 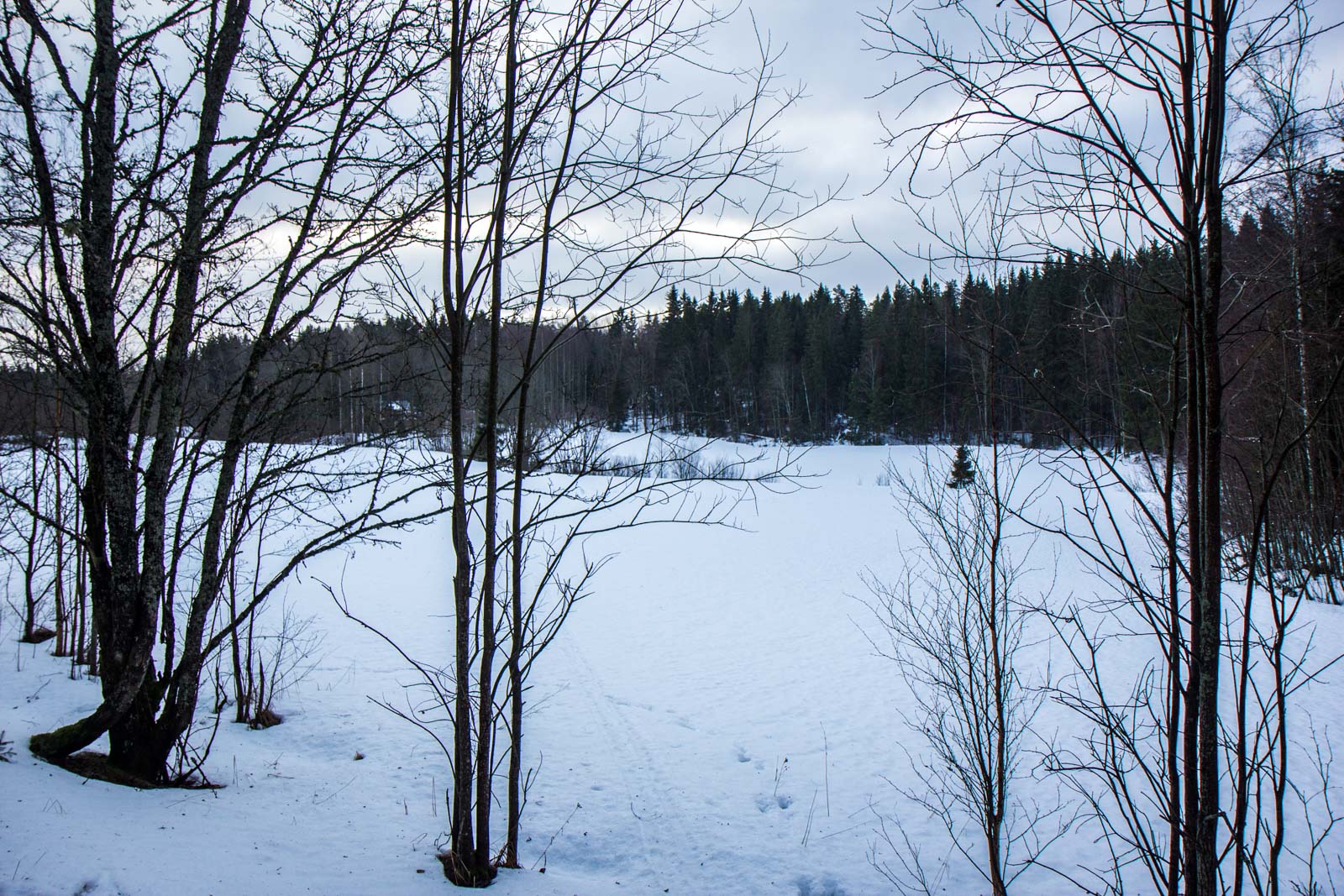 Oddly enough, with snow shoes strapped to my feet, I feel even closer to the nature myself. It’s because I’m not being bogged down in the thick snow that covers the ground or worrying about slipping on the patches of ice that lie hidden amongst the white.

I have the sensation of floating through the countryside as though it’s carrying me, rather than hindering. 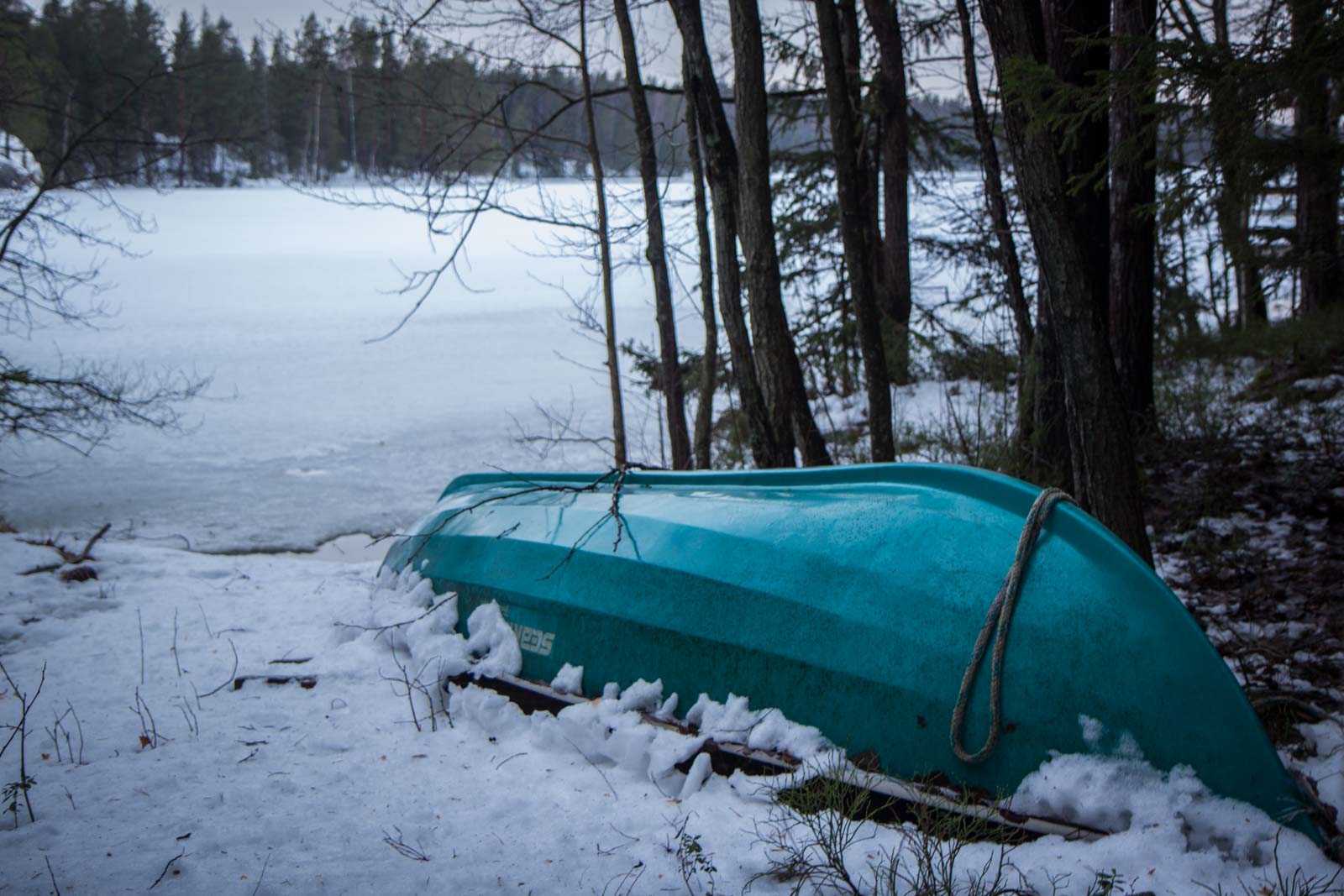 I get to a frozen lake. An upturned boat on the shoreline seems out of place but it’s a reminder that, although the winter feels like it has encased everything in sight, it is ephemeral.

The branches carry white passengers, the animals in the water are trapped by a hard thick covering, the air bites my face, and the ground crunches underfoot. Still, all of this will change in the coming months. 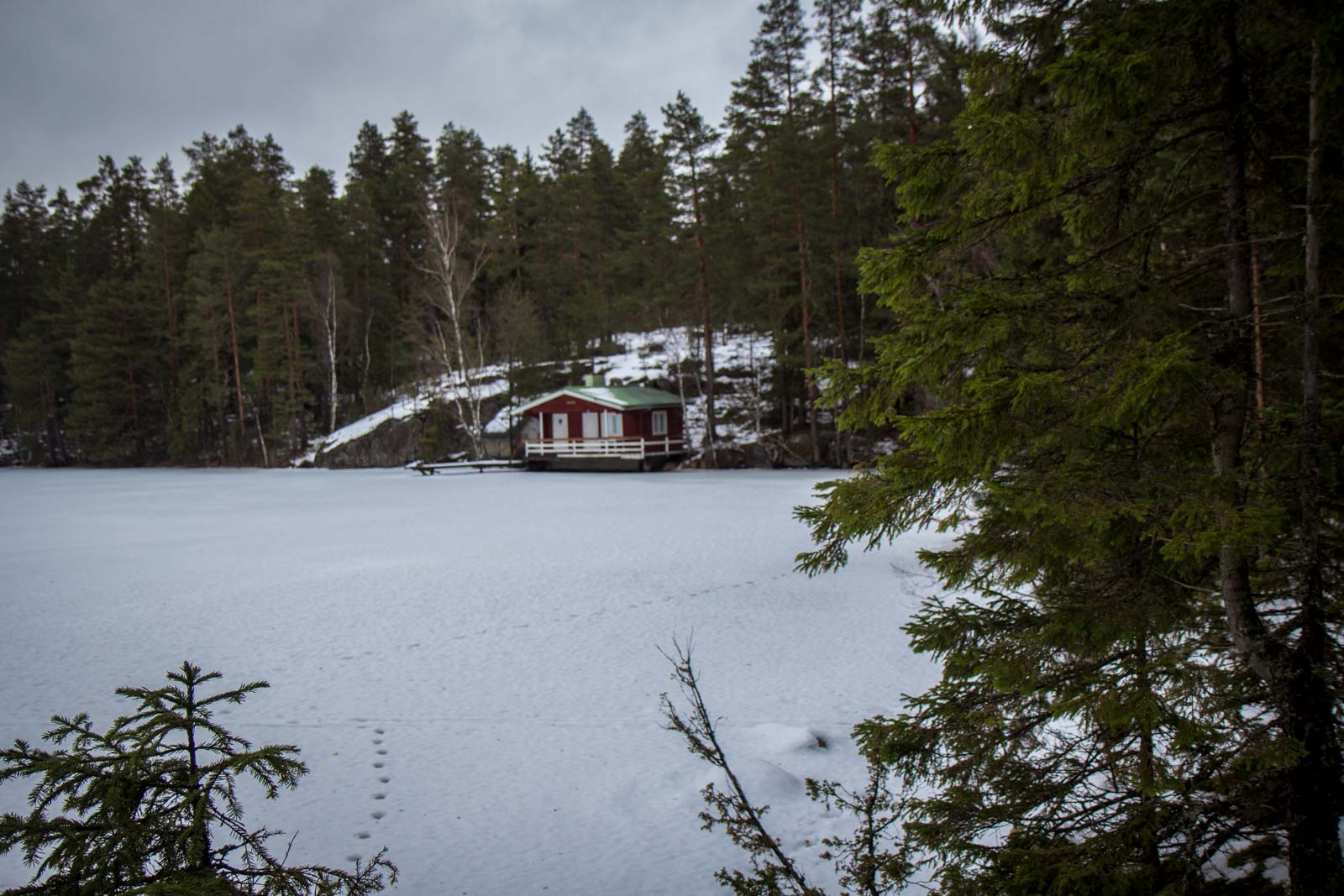 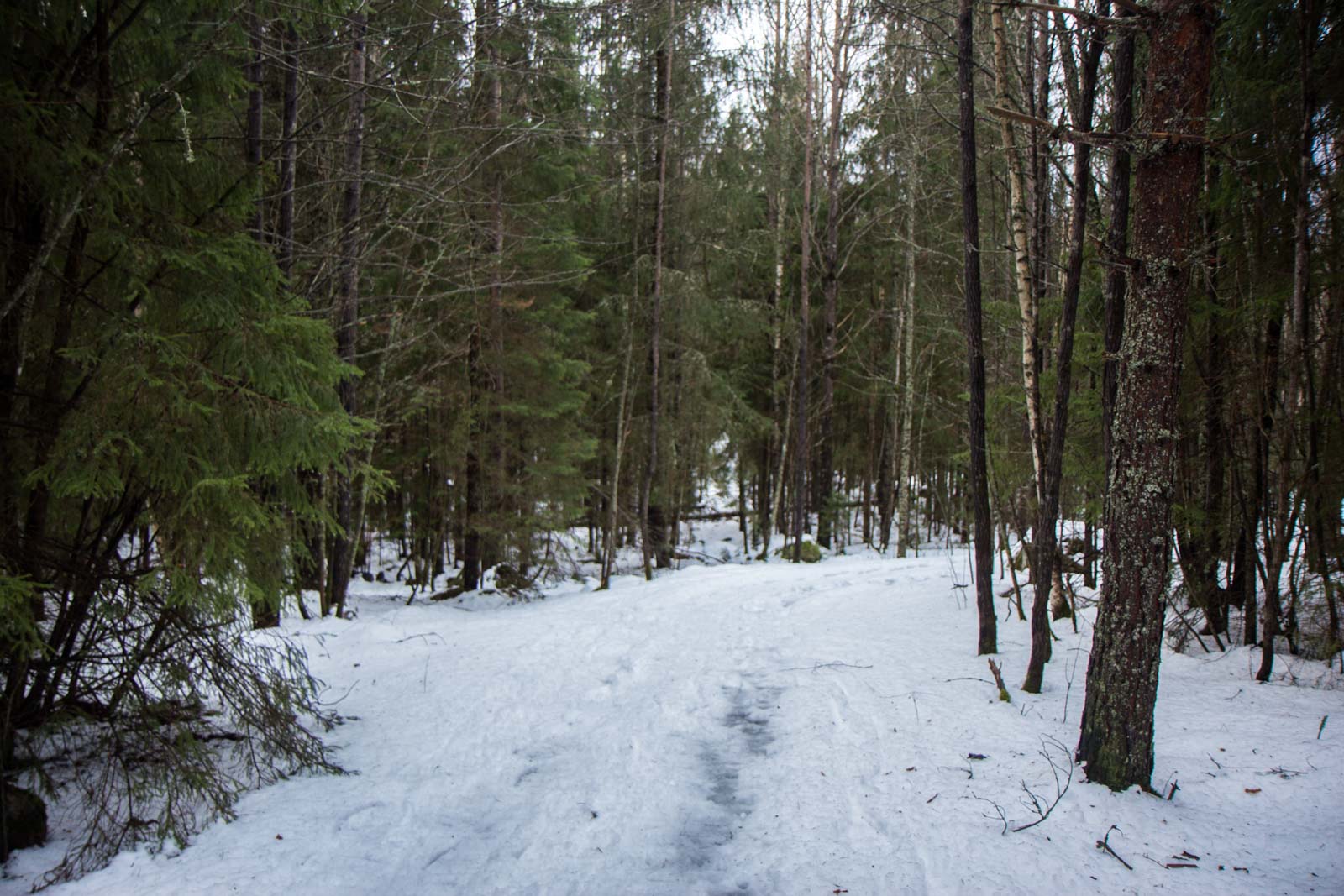 I haven’t had the luxury of decades spent amongst it, through changing seasons, the transitions of colours, and the various silences they produce. But I hope he is right. This is pure and fresh nature and I’m glad that it is a part of my world.

>> You can find out more information here about Green Window

>> You can find out more information here about Eventure

Time Travel Turtle was a guest of Visit Finland but the opinions, over-written descriptions and bad jokes are his own.