The tower of concrete rises up in front of me. A square base connects it to the ground but, above, it reaches up to the sky 107 metres high.

It looks like it could be some kind of communist statue.

If I was in a former Soviet country, I would bet on it being some kind of tribute to a war hero. If I was in North Korea, it would probably be a memorial to Dear Leader and/or a celebration of how well fed everyone is. But I’m in France. In the city of Le Havre in Normandy, to be exact. And this is no piece of propaganda. It truly is a symbol of rejuvenation.

This tower is the Church of Saint Joseph. It may look grey and brutalist from the outside but, inside, it bursts with colour. I have no idea what to expect as I walk in through the doors but it turns out to be unlike anything I have seen before. Expectations may have been useless.

The altar is in the centre of the church’s square base and the congregation sits around it on all sides like a theatre in the round.

Directly above it rises the tower, which is hollow on the inside.

The markings I could see from the street turn out to be coloured windows and, with the sun blazing today, they beam a kaleidoscope throughout the whole building. 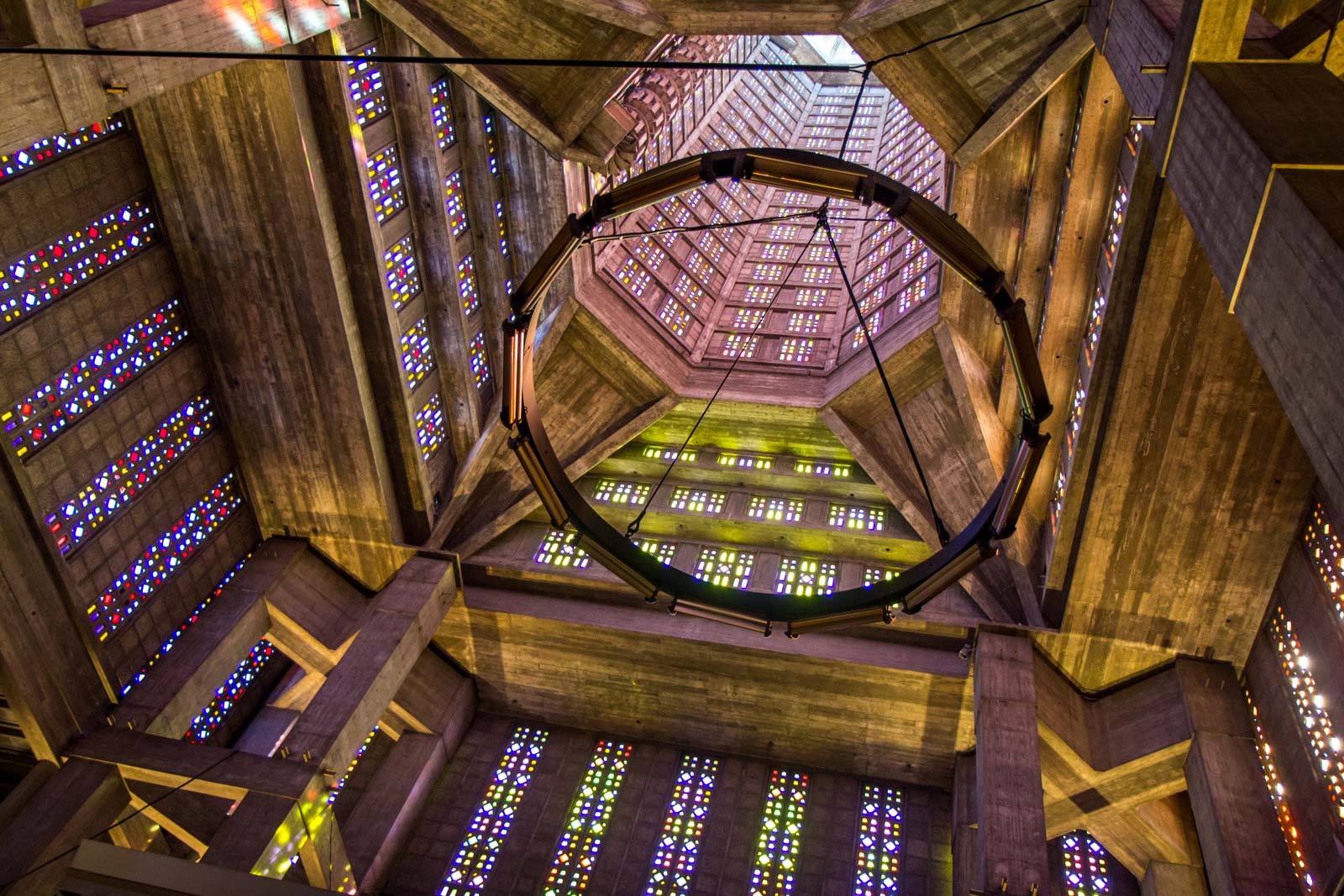 In the Church of St Joseph, the effect is concentrated. All through the city, I find it in some diffused form.

For almost the entirety of Le Havre’s city centre is built from this same grey concrete – but what stands out is the colour that shines from within. The rebuilding of Le Havre

Le Havre was severely bombed during the Second World War and pretty much all of the centre of the city was destroyed or unusable. Even before the conflict ended, the decision was made to rebuild Le Havre – but in a style unique across Europe.

Under the leadership of Auguste Perret, the entire urban landscape was designed as one single interconnected plan. Rather than the haphazard collection of buildings from different eras and different architects that most cities have, Le Havre was intended to have a harmony.

Buildings may have their own look and hit a different note, but they are singing from the same melody. 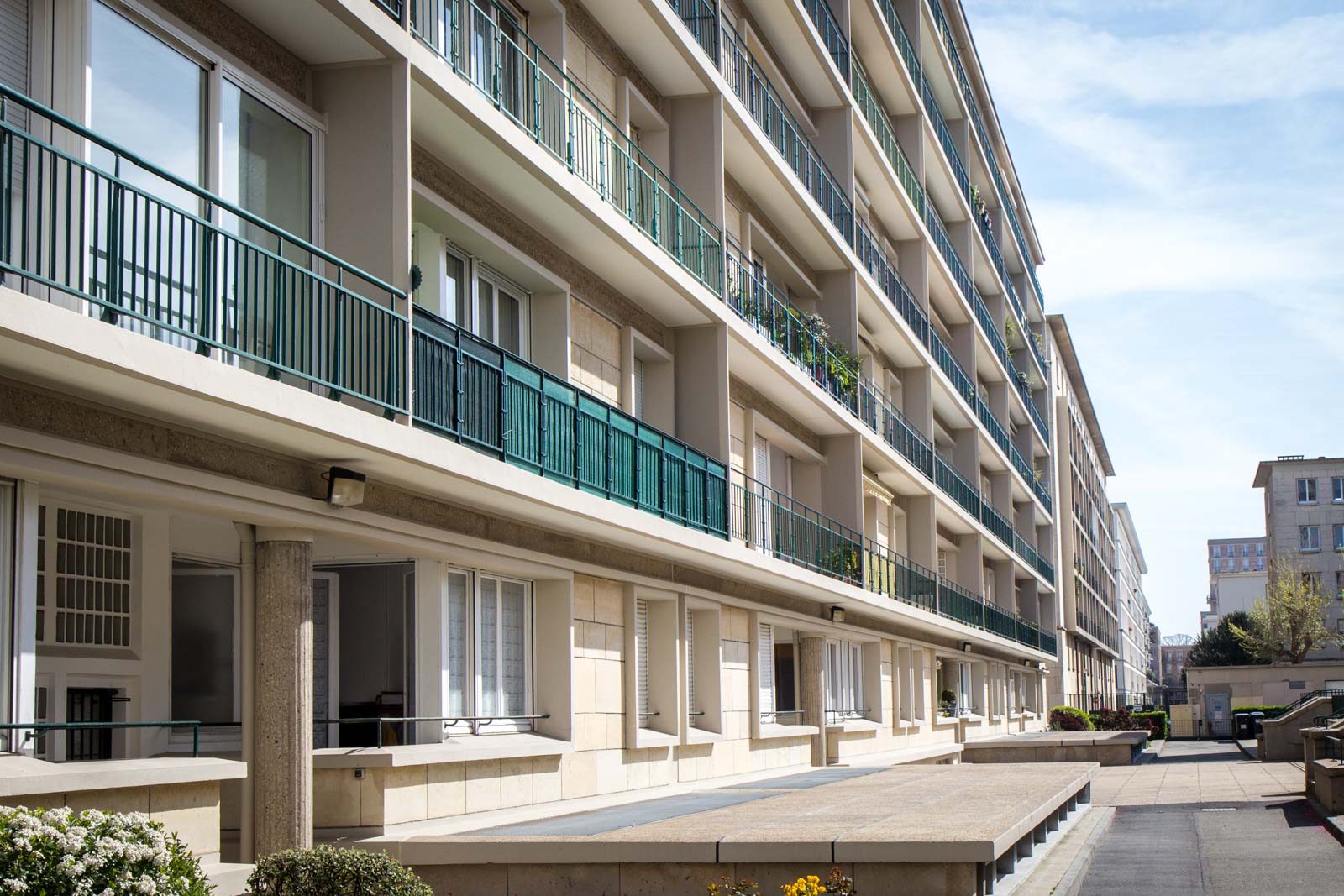 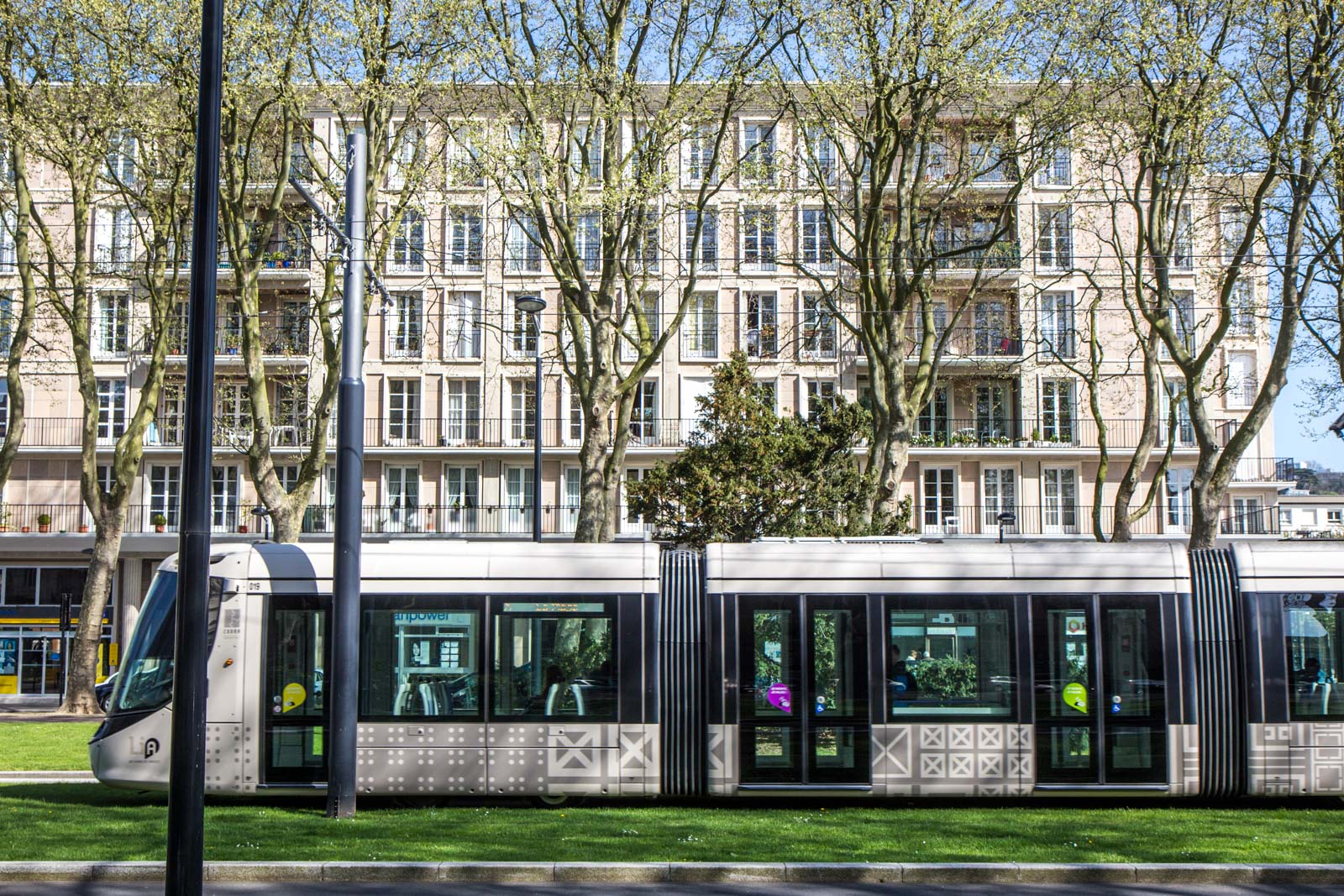 It is one of the most remarkable urban reconstruction projects in Europe. As I walk through the streets, I find that the dream has been achieved.

You don’t notice when each building ends and the next starts – but if you stop and take in the panorama, you’ll realise that each wall that surrounds you looks slightly different. 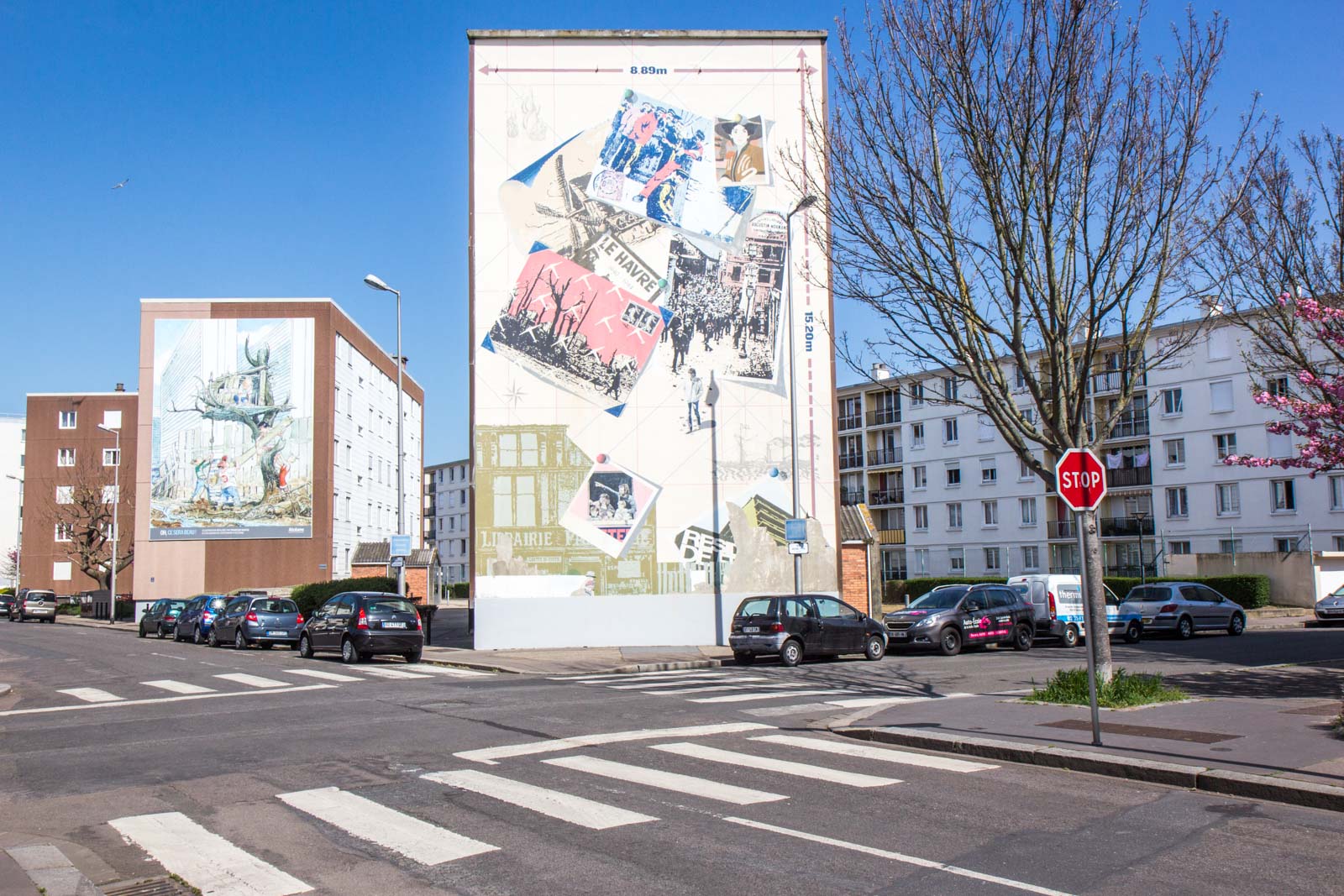 A row of windows is interrupted by an internal balcony; rectangles of yellow and orange cover up part of a walkway; hundreds of narrow sunlights create a pattern by themselves; a protruding wall gives texture to what might otherwise have been plain. 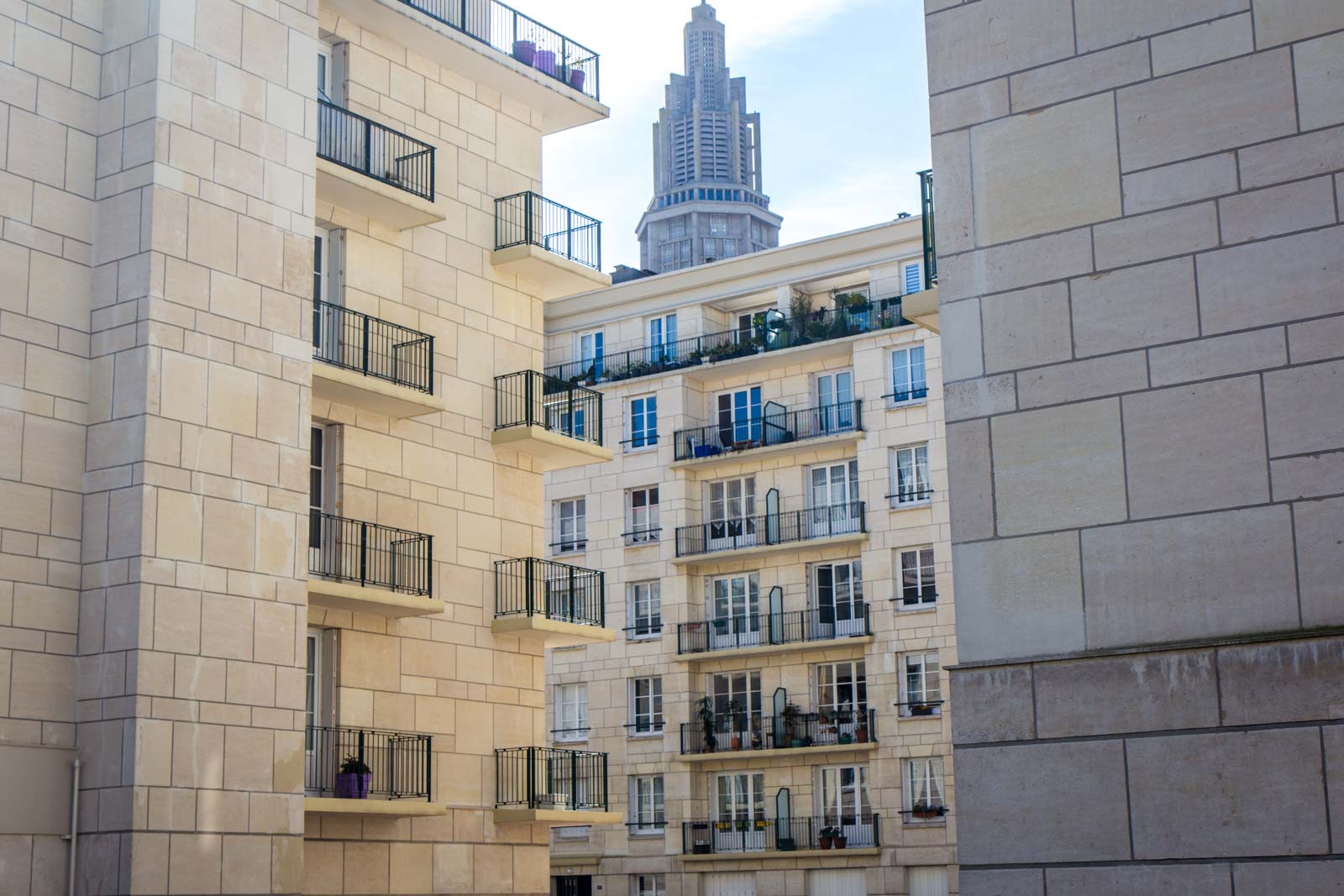 The town planners made a decision to dramatically reduce the density of the city with their new design.

The grid system they implemented took the residential sections from 2000 people per hectare to just 800 per hectare. Gardens and courtyards were integrated into the apartment blocks so there is light and freshness between them all and the harmony is carried through the air. 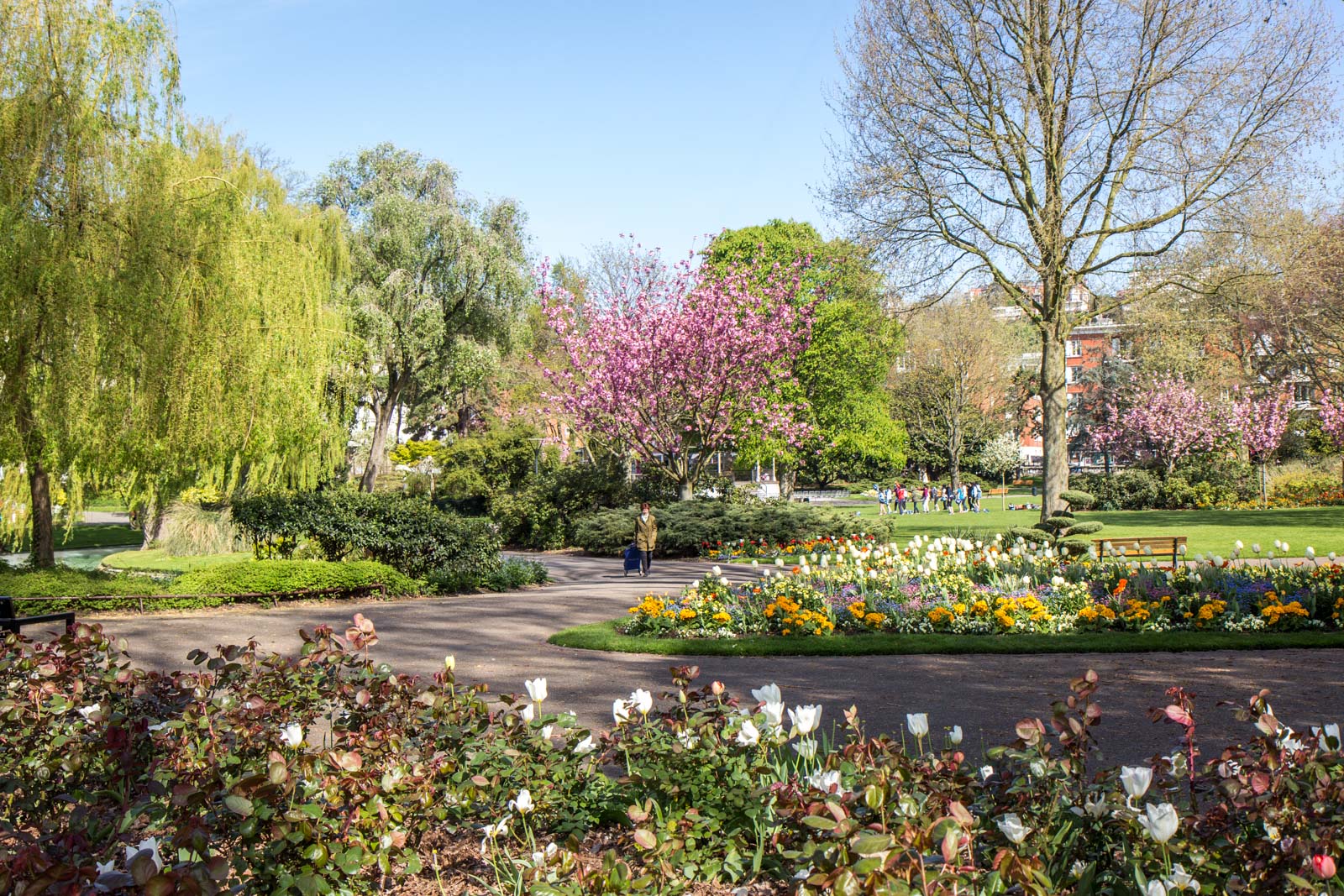 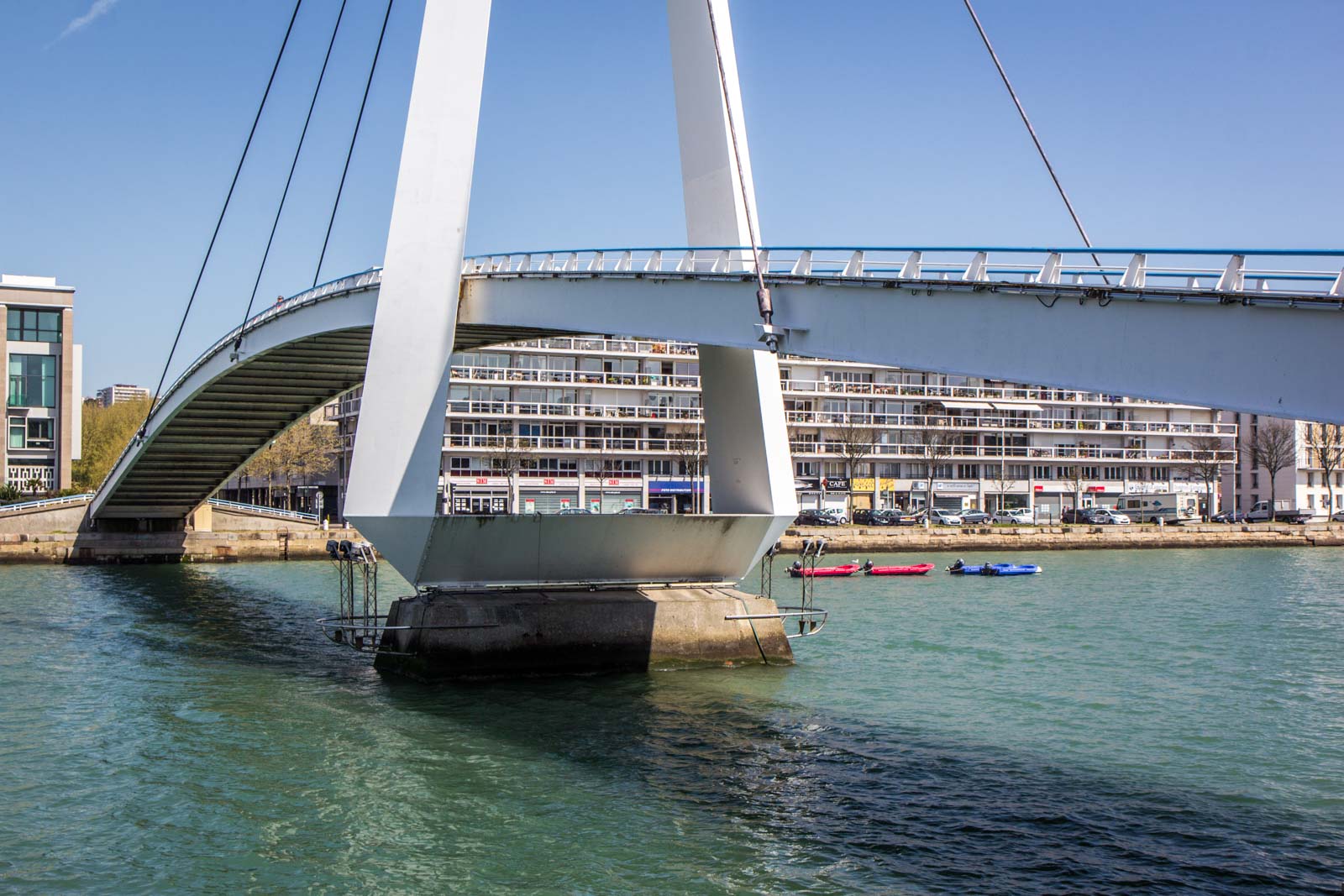 At the western end of the city is the beach, which is a strange juxtaposition with a concrete city. On a nice day, it is a good place to either start or finish a visit to Le Havre.

Funnily enough, even it has been incorporated into the urban design and the road that leads from the shore towards the centre feels like a grand entry gate with large buildings on either side and a wide grassy centre. Towards the eastern end of the rebuilt centre is the City Hall, which is a perfect monument to the architectural style that now defines Le Havre. Clearly concrete and with minimal decoration, it still has the feel of neoclassicism that was the intention of the designers.

The blocks to the south have a mix of residential and commercial – both of which blend together seamlessly as you would expect. Walking through these streets without set direction will take you through good examples of the style of the city. 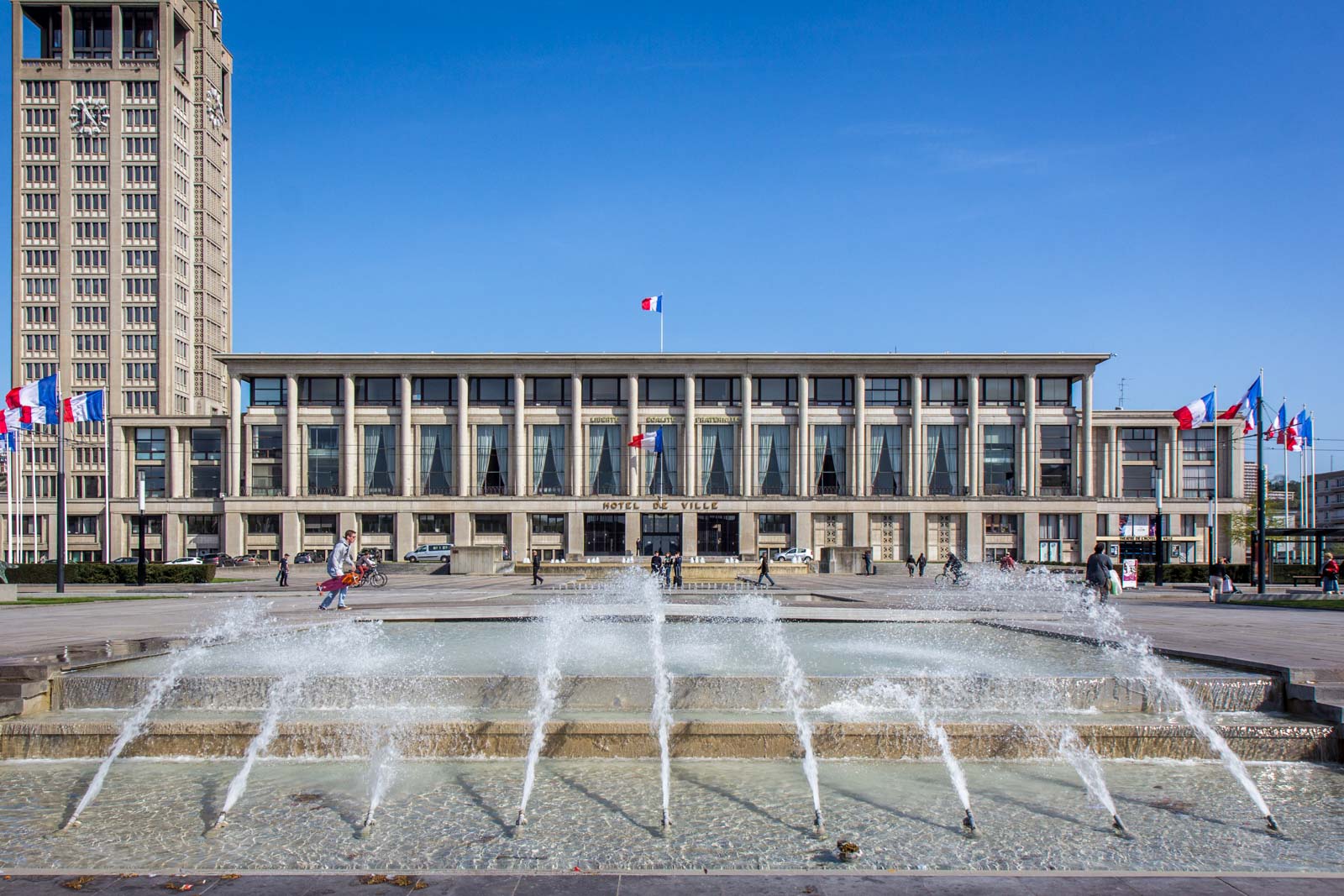 And then, of course, there’s the highlight of Le Havre – the Church of Saint Joseph. It can be seen from the surrounding streets and is useful as a reference point if you happen to get lost. But it is much more than that.

In many ways, the church is an unofficial icon of what the city has become. Rising up from adversity, constructed of dull concrete, but with a vibrant and lively heart inside.

This is a city that has found beauty through consistency and turned destruction into community.

Time Travel Turtle was supported by Atout France and Brittany Ferries but the opinions, over-written descriptions and bad jokes are his own.