Borobudur Temple was lost for centuries until it was found again, covered in overgrown jungle. Now the world’s largest Buddhist temple is open to the public and you can visit it with a Borobudur tour!

High on a mountain in Central Java, Borobudur Temple rises up towards the sky.

In Buddhist belief, the closer you are to Heaven, the closer you are to the gods. And as you climb the steps of the temple, the jungle landscape of Indonesia revealing itself in every direction, you can understand how the people who built this masterpiece felt more connected to the ethereal than the earthly. 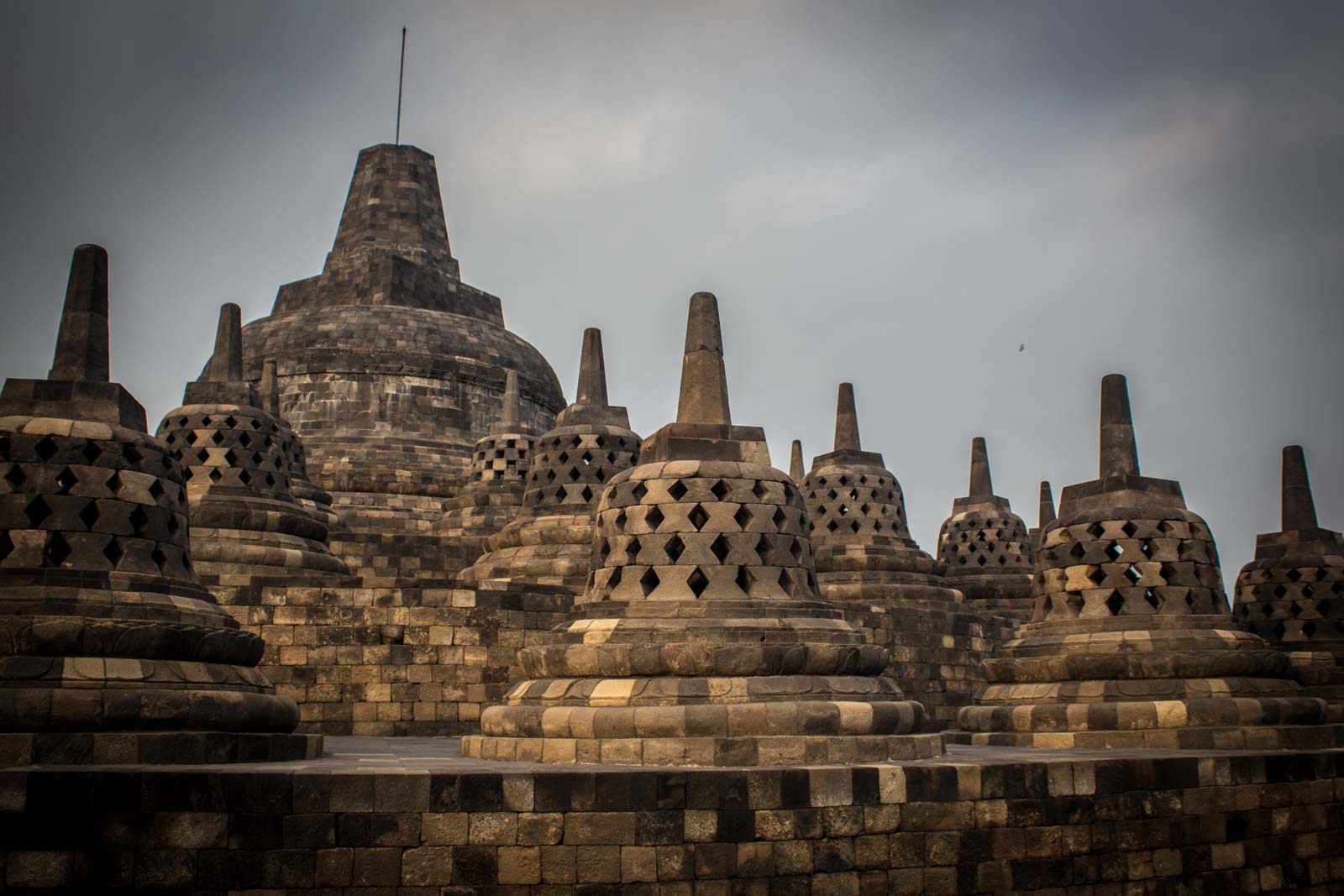 The world’s largest Buddhist temple is made up of five large square terraces, with three circular platforms on top of them, and then a magnificent stupa at the very top.

From a distance it is stunning… but close up the true magic is revealed with intricate carvings on the walls throughout the whole complex. 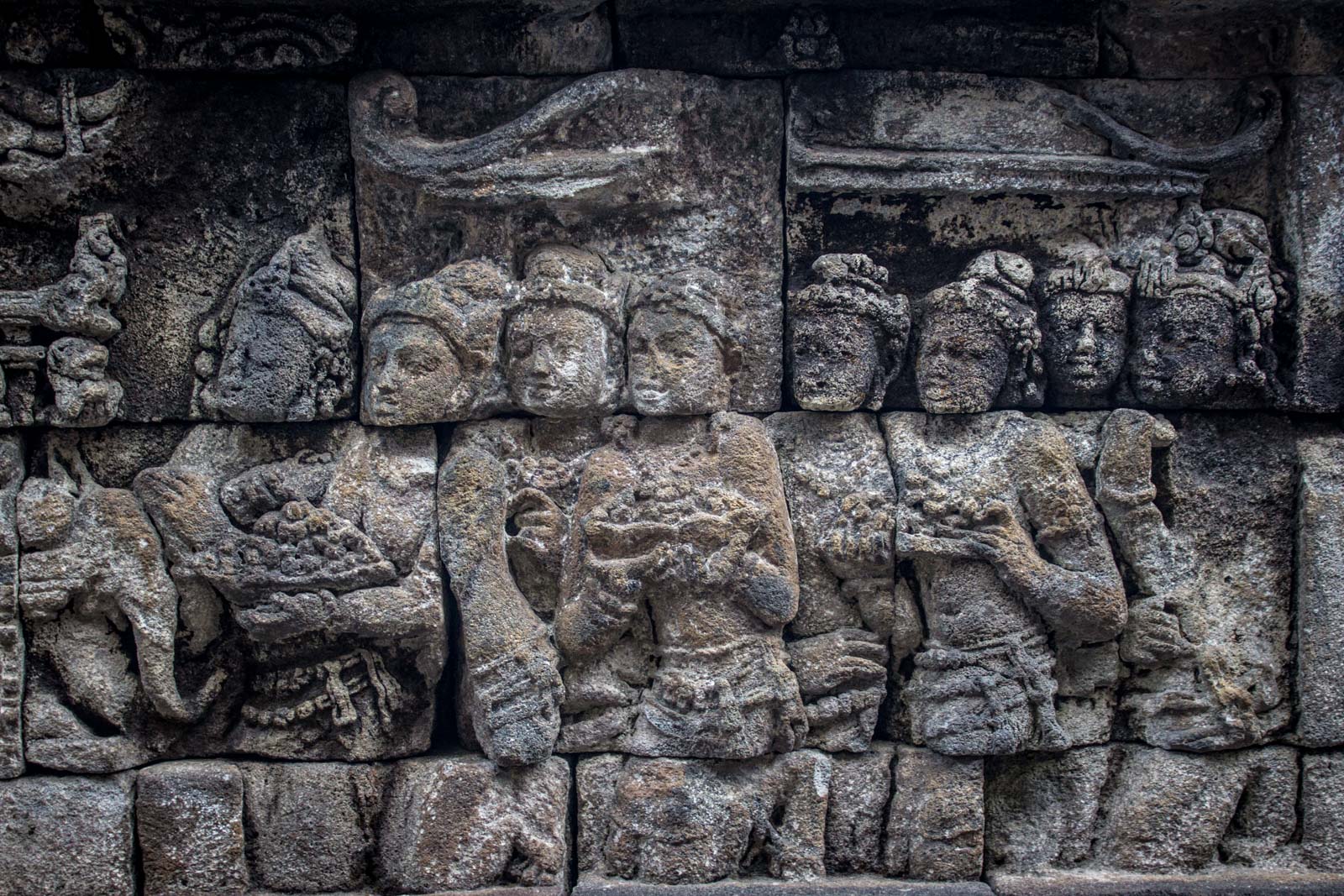 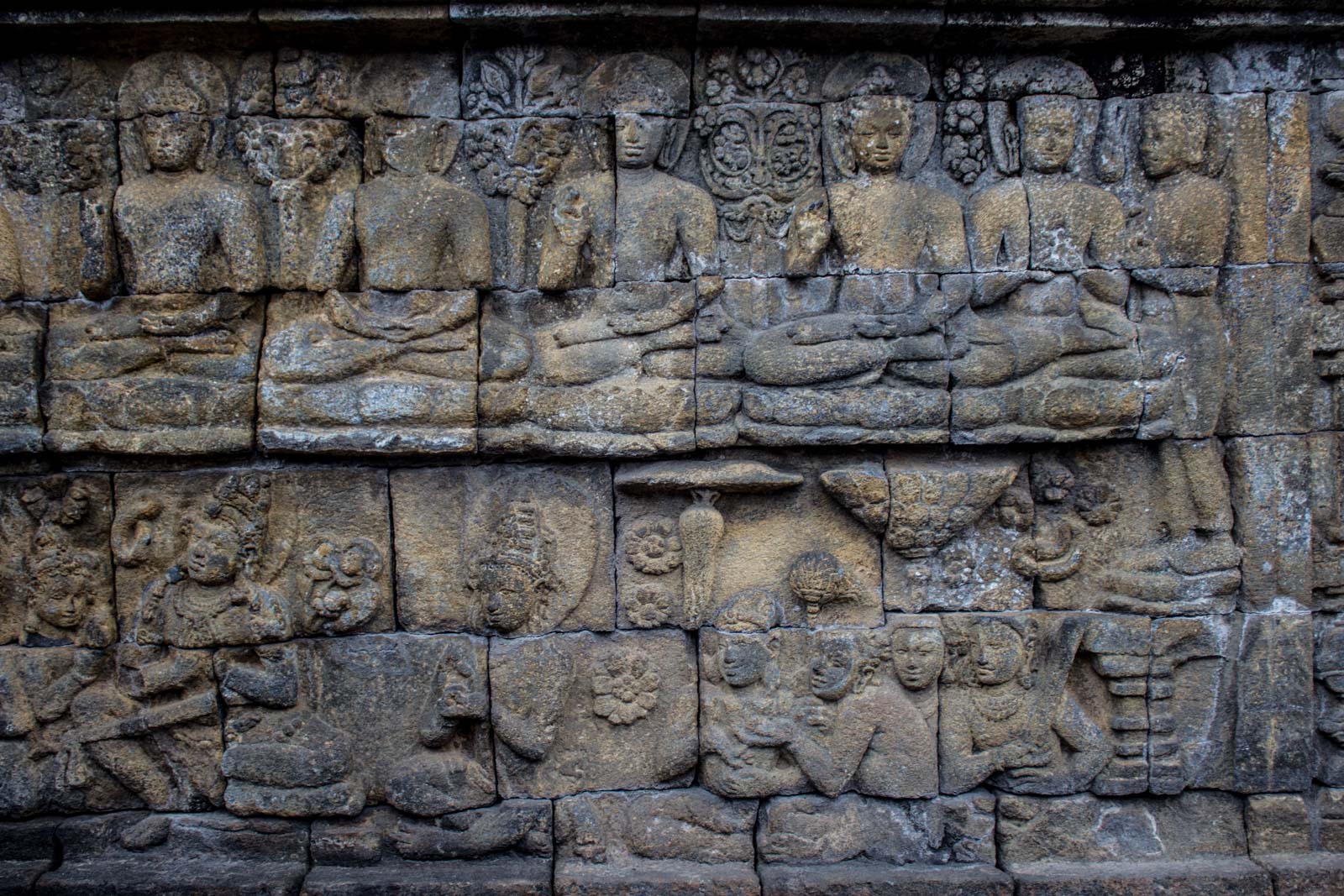 Borobudur was built at some point in the eighth or ninth centuries but we don’t know the exact date because there’s no written record of its construction.

It’s interesting because this was a period when religion in this part of Java was in flux. Hindu was still a popular faith and, in fact, the enormous Hindu Prambanan Temple was being built not far away at the same time.

Indigenous religions also still had a hold in many parts of Central Java. And Buddhism was growing in power, with the driving force coming from India’s influence.

At some point in history, Borobudur Temple was abandoned and left to the wilds of nature.

Regardless, what we do know is that for at least five hundred years the jungle was all that climbed the steps towards the celestial.

Trees, vines, and animals overtook one of man’s greatest creations and embraced the rocks again. The temple became hidden from the eyes of humanity. 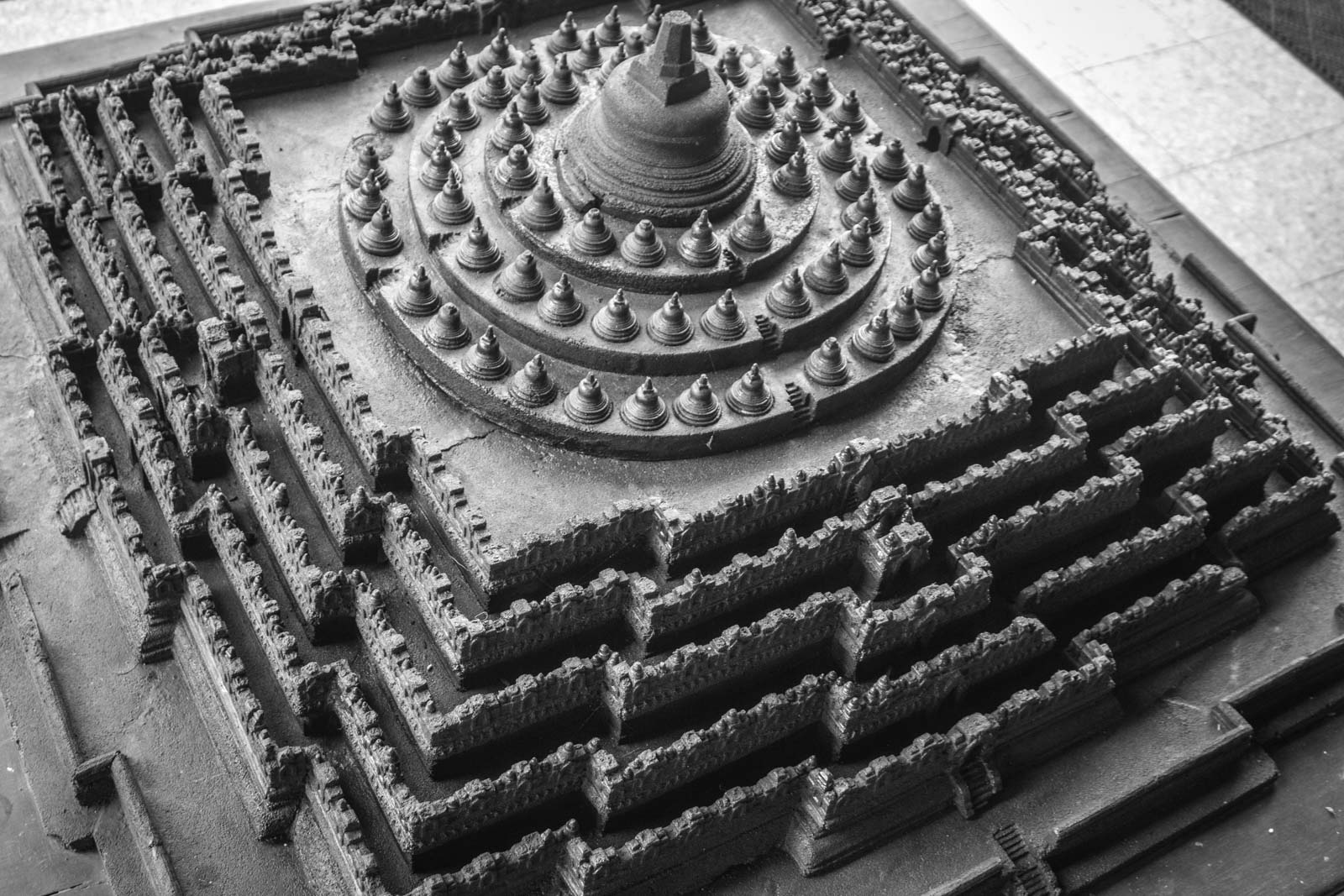 It wasn’t until 1814, when Java was under British control, that the English governor, Thomas Stamford Raffles, heard stories from local villagers about a mysterious and abandoned structure.

He sent his people to investigate and for two months a team of 200 men had to cut down trees, burn vegetation and dig away at the earth to reveal the temple at Borobudur. 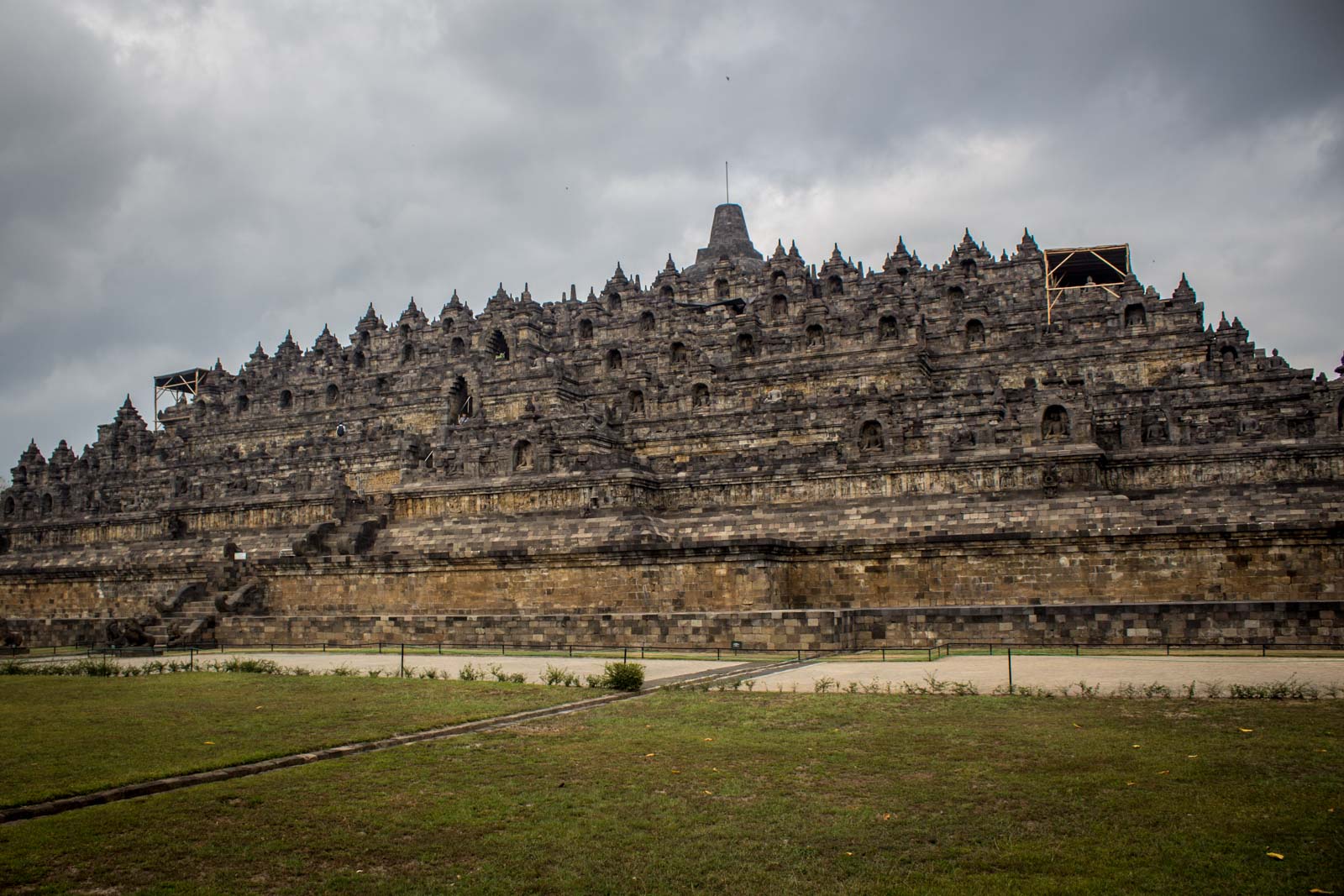 But, despite this discovery, it wouldn’t be for another 160 years that there was any real concerted effort to protect and restore the world’s largest Buddhist temple.

Until the 1970s, there were small restoration projects but there were also far too many instances where people were allowed to take away parts of the temple as souvenirs!

And by clearing all the jungle away from the site, the temple had been exposed to the elements and was being damaged by the weather. 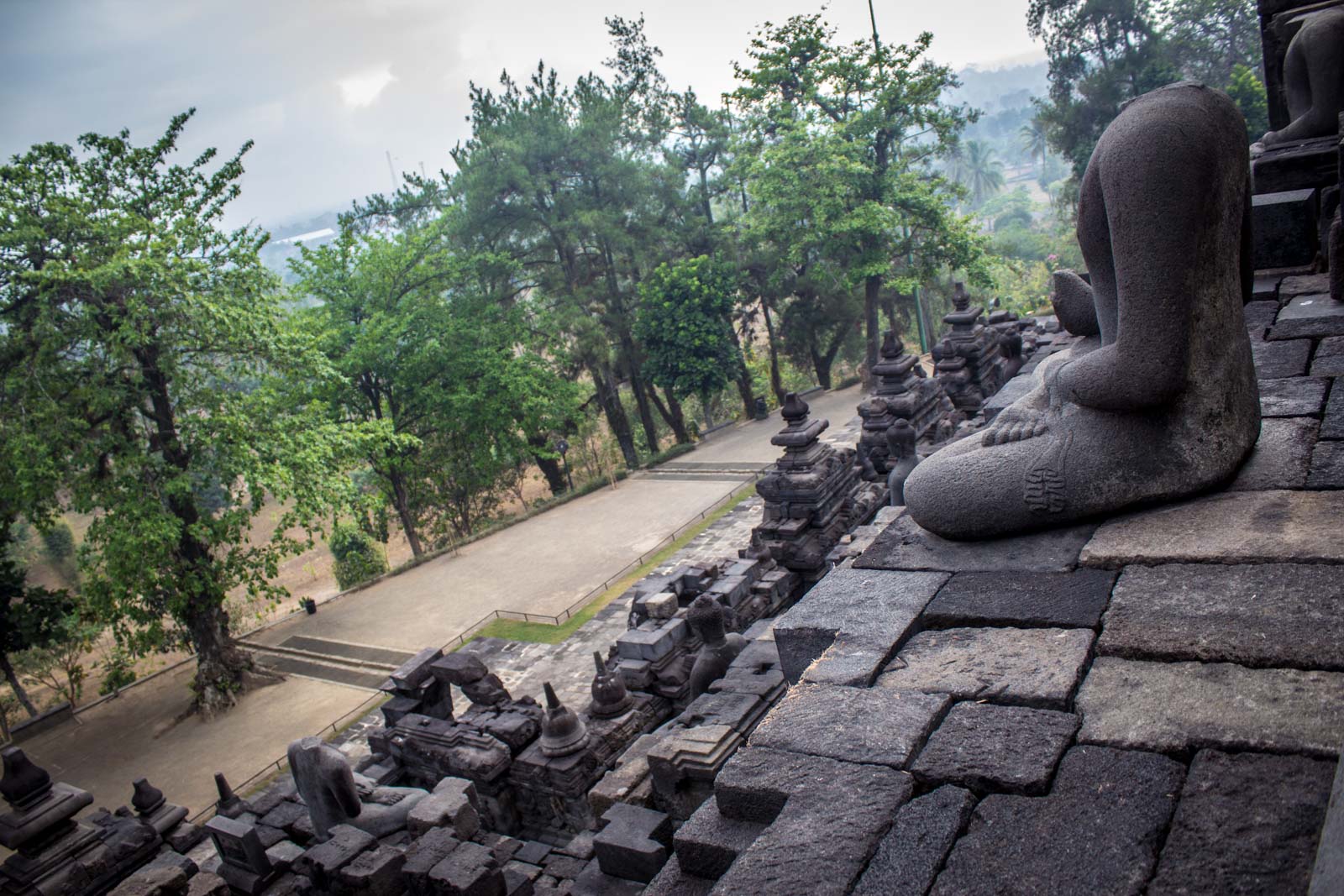 In 1975, a complete restoration of Borobudur Temple began.

Led by UNESCO and the Indonesian Government, it had funding from five other countries. The whole project took seven years to complete, with more than one million stones dismantled, cleaned, catalogued, and put back in place.

Visiting Borobudur today, it’s hard to understand how something this large and spectacular could have remained hidden for so long. But there’s a certain enchantment in imagining you are the explorer who finds it for the first time in centuries.

It’s slightly easier this morning because I’ve come before the official opening hours to climb to the top in time for the sunrise (a privilege for which you pay a higher admission fee).

There are only a handful of people here and there’s a peace and serenity fitting for such a spiritual place. 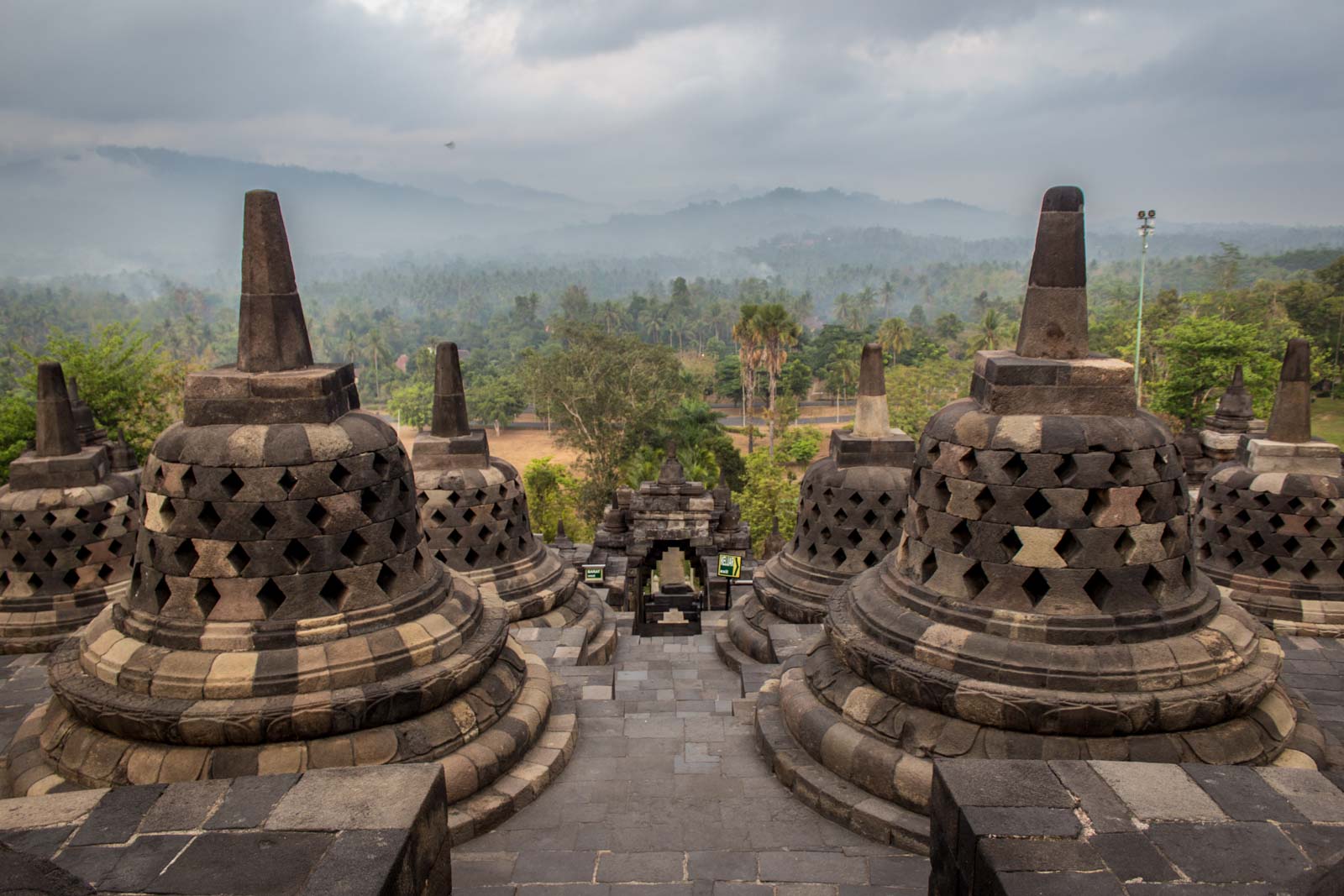 I’m told by some tour guides that the site gets absolutely packed during the day – to the point where it’s hard to even climb up the narrow and steep staircases, let alone lose yourself in the moment.

I’m glad that’s not going to be me. 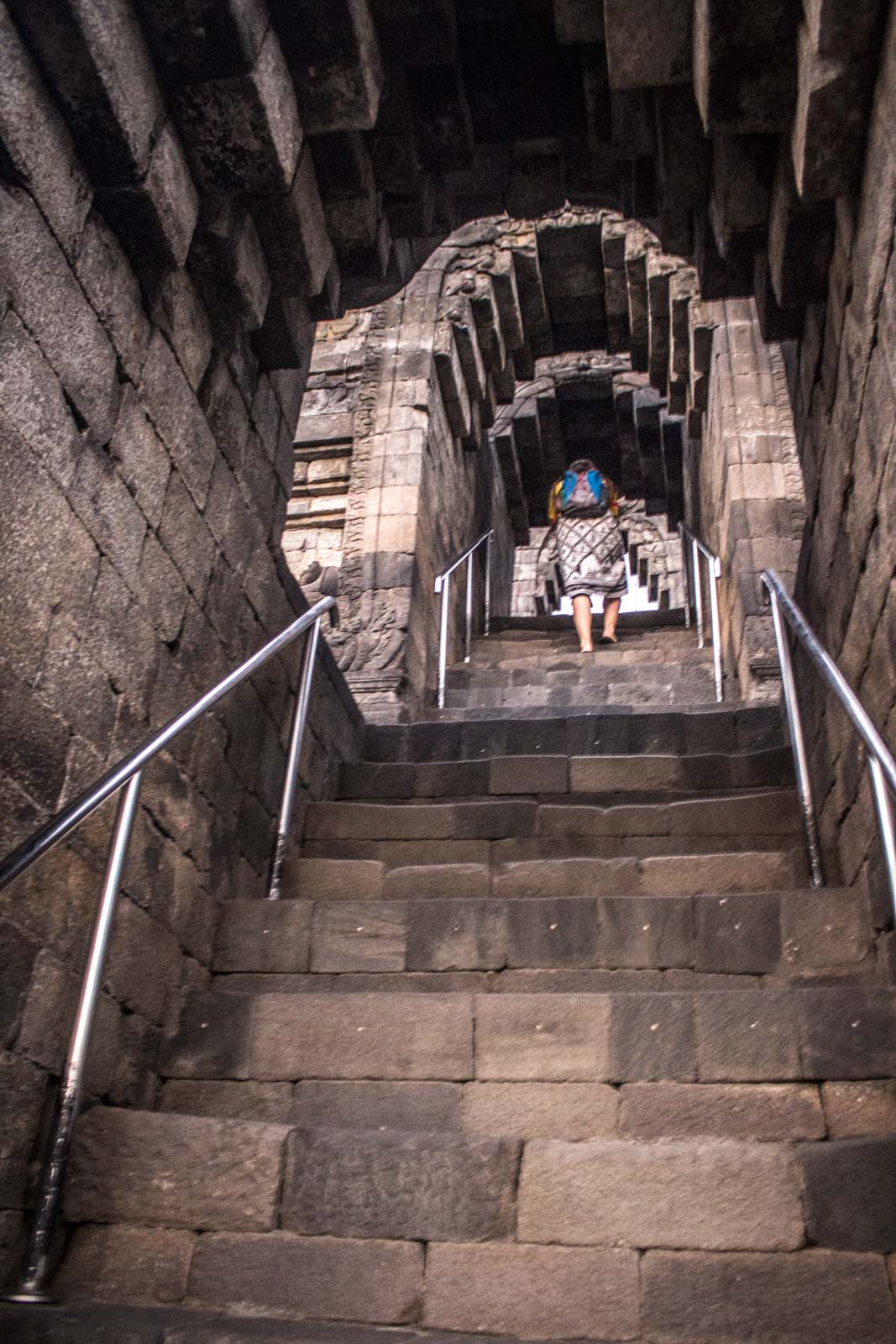 As the sun rises in the sky, it’s obscured partly by this morning’s cloud cover but rays are starting to break through and illuminate the structure and the surrounding lands. It’s still very quiet at the top of the temple and slowly it’s becoming lighter.

Around me, inside 72 small stone stupas, are 72 seated Buddhas. They turn from shadowy silhouettes into glowing images of divinity as the morning progresses.

Only one is uncovered (I’m not sure why) but the rest seem protected and disconnected from the daily pilgrimage of the tourists. 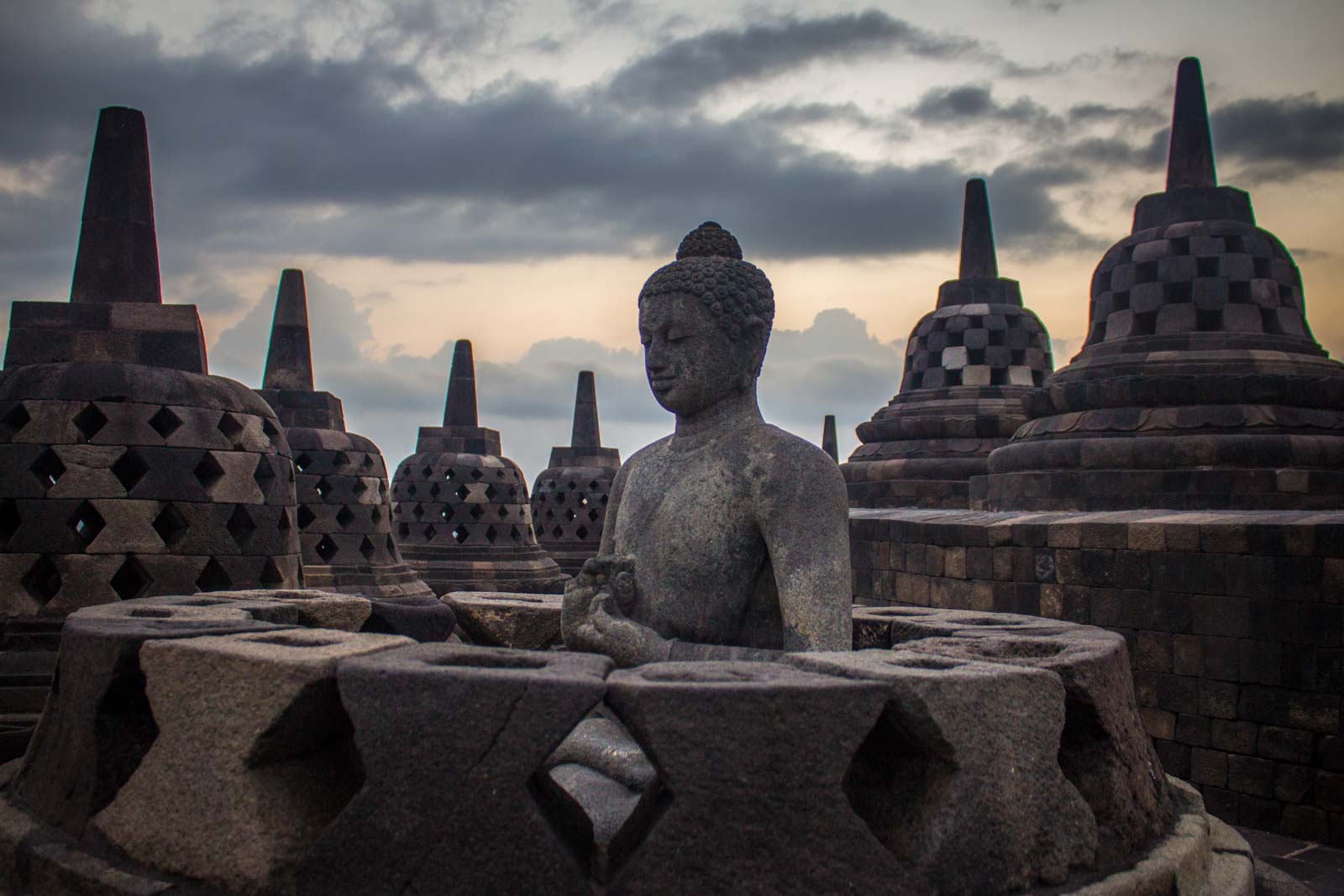 To do a proper Buddhist pilgrimage of Borobudur Temple, you are supposed to start at the base and follow a particular route that takes you past the relief panels carved in stone (there are more than 2,500 of them) and the statues of Buddha.

Most visitors – myself included – don’t do this, though. There’s enough to see without walking along every step of this five-kilometre pilgrimage route.

Although it is tempting to explore different parts to get away from other tourists as the main gates open and more people come in.

The Borobudur Temple complex is now the single most visited site in Indonesia (although the majority of tourists are Indonesian).

But the increasing numbers are presenting challenges and the authorities are looking at ways to manage any potential damage to the site.

Something so intricate but also so large, abandoned for so many years, needs a lot of love and care. Being closer to Heaven doesn’t make it immune from the hands of man.

How to get to Borobudur

Getting to Borobudur from Yogyakarta is not simple, unfortunately. But there are a few different ways depending on how much time and money you have up your sleeve.

The cheapest but least convenient way is to go by public bus. The buses leave from Jombor terminal in the north of Yogyakarta, will take 90 minutes and cost Rp30,000 (US$2.10).

However, the first bus leaves at 06:00 so you won’t be able to make the sunrise (which is quite special).

In the tourist areas of Yogyakarta, you’ll find quite a few local travel agencies that offer minivan transfers to Borobudur.

The cost will probably be around Rp75,000 (US$5.50) for a return trip and there should be departures that get you there in time for the sunrise. This is probably the best option for the budget-minded.

You can also hire a driver/guide to take you to Borobudur in time for the sunrise – and to some of the other main sites you may want to see in the area that day.

This is much more expensive option but is also much more comfortable and convenient and is a good option if you are short of time and want to make the most of your holiday.

A few recommended options to get to Borobudur are here:

A few other bits of practical information worth knowing: