It’s been a really busy year of travel for me and I feel like I’ve jumped all over the globe. In fact, I went multiple times to every continent except South America and Antarctica so lots of frequent flier miles! 🙂

I often get asked where my favourite places are and it’s a hard question to answer. I definitely have some permanent favourites that I always love going back to – Japan and Thailand, for instance – but the question is hard because every year I see new places that I also fall in love with. The list always gets longer!

If you’re in the process of planning some travels yourself or looking for some inspiration, I thought I would put together a list of suggestions for you. These would all be fantastic options for some travel in 2016. It could be for a short weekend trip or a longer exploration. There’s a bit of a variety here, depending on what you’re looking for.

I should also point out that I have decided the list based only on places that I have been myself – so I’m sure there are a bunch of other great options I could have included. If you would like to make a suggestion yourself, I would love that. Feel free to add it into the comments at the bottom.

In the meantime, though, here are my best 16 destinations for 2016 (in alphabetical order).

This is still one of my favourite cities in Europe and I’ve included it in the list because, if you’ve never been, you are missing out. The architecture is beautiful and there are plenty of interesting sights, including the Parliament building and the chilling House of Terror. The hot public baths are a highlight so don’t miss visiting one of them. I would recommend going in summer because I think the best thing about Budapest is all the open air dining and drinking – it gives the place such a social cosmopolitan feel that you can just soak up (for very affordable prices!).

While Central America holds all sorts of treasures, it is also not one of the most stable regions in the world. Costa Rica, however, has had a long history of relatively good security and that means a well-developed tourism infrastructure that makes travel very easy. The country is full of microclimates and in just a week you can experience Caribbean beaches, rainforest and jungles. Throw in a good dose of genuine culture and it makes for a great trip – you just need to avoid the manufactured tourist experiences created for the mass tour groups.

I don’t think France needs any introduction but I still haven’t done a lot of travel there myself. I did make it to Normandy this year (also a great destination!) but I wanted to highlight the Dordogne region in particular. This stunning part of France is perfect for nature lovers – especially those who also like wine and castles! The Dordogne River runs through the area, providing options for kayaking and swimming. There are also great hiking and cycling routes. If you’re driving, don’t worry, because there’s plenty of historic sites to see along the roads. It’s an easy place to spend a week relaxing and enjoying all the natural beauty.

You might think that you know Dublin but the Irish capital is more than just Guinness and whiskey. I’ve been there a few times and have only just started to discover the offerings beyond the obvious. There’s a growing food scene that is transforming the local cuisine and the influx of tech workers to the city is giving it a more modern feel in parts. The coastline has all sorts of cute places to visit, including Joyce Tower. Plus there’s hiking in the hills around Dublin. It’s a cheap and easy flight from most of Europe, making it a good weekender.

As I said, I love Japan and it’s always nice to discover a new part of it. This year I went to Hakuba, a few hours on the train from Tokyo, to check out the ski fields. This is a fantastic winter destination that has loads of ski resorts that cater to beginners and advanced. Best of all, it’s still got a traditional Japanese feel so you can soak in a hot onsen after a day of skiing and then eat noodles and fish on a tatami mat. It’s a particularly good option for Australians who are keen on skiing during the Southern Hemisphere summer.

Hamburg is the second largest city in Germany but I get the feeling it’s neglected a bit by tourists. I’m not sure why because it has so much going on. It has a traditional side to it, mostly based around its maritime history, that is really interesting to explore (the Speicherstadt and the Maritime Museum are good examples). But it’s also got a vibrant nightlife scene and some very cool neighbourhoods full of artists and trendy cafes. There’s something for everyone here.

Vietnam seems to be more popular than ever at the moment and, I have to say, I’ve noticed a change since I first went almost a decade ago. The local people are much more welcoming and it’s much easier to get around. The capital Hanoi is one of the highlights of the country, a relatively green city with lots of sights – including the Ho Chi Minh mausoleum. But it’s another one of those cities that is just pleasant to spend a couple of days walking the streets, eating the food, and stopping in the cafes that the city (with its French influence) is known for.

Ok, this is a bit of a tricky inclusion because Huaraz itself isn’t much of a place. It’s a city in the north of Peru that most tourists don’t visit. But I’ve put it on the list because it’s the base for some of the best hiking I’ve done. The nearby Huascaran National Park is incredible and rivals anything you’ll see around Cusco. You can do a day hike to glacial lakes (at really high altitudes) or, if you’re a bit more adventurous, you can even go out hiking and camping for a few days.

I’m still always amazed at how close Morocco is to Europe but how different everything is. I love the weather, the food, the colours, the smells, the history – there’s just always so much going on everywhere. If you’ve never been before, Marrakech is the best place to start. It’s a little touristy but it has everything in the one place and it’s fun to spend a few days checking out the souks, exploring the sights and trying different meals. For side trips, you can then head to Essaouria or to the Atlas Mountains.

It’s been a few years since I was in Myanmar but I’m going to keep suggesting people go until everyone has. It’s changing rapidly but still has the charm of not being as developed as neighbours like Thailand or Cambodia. From the incredible temple city of Bagan, to the grand Irrawaddy River and the intoxicating chaos of Yangon, it’s a country full of rich experiences. It can still be a little harder to travel independently than other parts of Asia but, for the adventurous, that’s half the fun!

There were a few years after Hurricane Katrina when I could understand people being hesitant about visiting New Orleans. A decade on, though, the city has just grown stronger for the disaster. There is a vibrant arts scene, the food culture is world class, and some of the more gentrified neighbourhoods have really cool places to hang out. But alongside all of this, the history and traditional culture of New Orleans is still there to explore in one of the most beautiful cities in the US.

When people think of the Netherlands, they often think of Amsterdam – but you shouldn’t forget Rotterdam. They are relatively close but completely different. Rotterdam has embraced its multicultural history and it’s a melting pot of cuisines and lifestyles. It’s also got a cool and modern side to it, displayed through the incredible architecture or the fun pop up bars and restaurants in summer. There’s a strong nightlife but also plenty of culture – like the fantastic Boijmans van Beuningen Museum or the Kinderdijk windmill complex.

I fell a little bit in love with San Sebastián during my trip there recently – it just has so much going on! There’s beautiful architecture, great walks in the nature around it, wonderful cultural offerings – oh, and it even has beaches for swimming or surfing. But, of course, it’s the food that really sets San Sebastián apart. As well as having the highest number of Michelin stars per capita in the world, even the standard pintxos bars all throughout town have such delicious food and wine. I spent almost the whole time eating – and you should too! In 2016, San Sebastian will be one of the European Capitals of Culture, so even more reason to visit in the coming 12 months. Despite all the years I lived in Australia, I never travelled to New Zealand until recently. How could I have been so foolish. The South Island is such an adventure with so many different landscapes. From the beaches and forests at the top, to the glaciers along the west coast, to the snow-capped mountains around Wanaka and then the sounds at the bottom. The best way to see it all is with a car or a campervan and, personally, I think you should concentrate on the nature and fill the days with hikes and simple exploration. 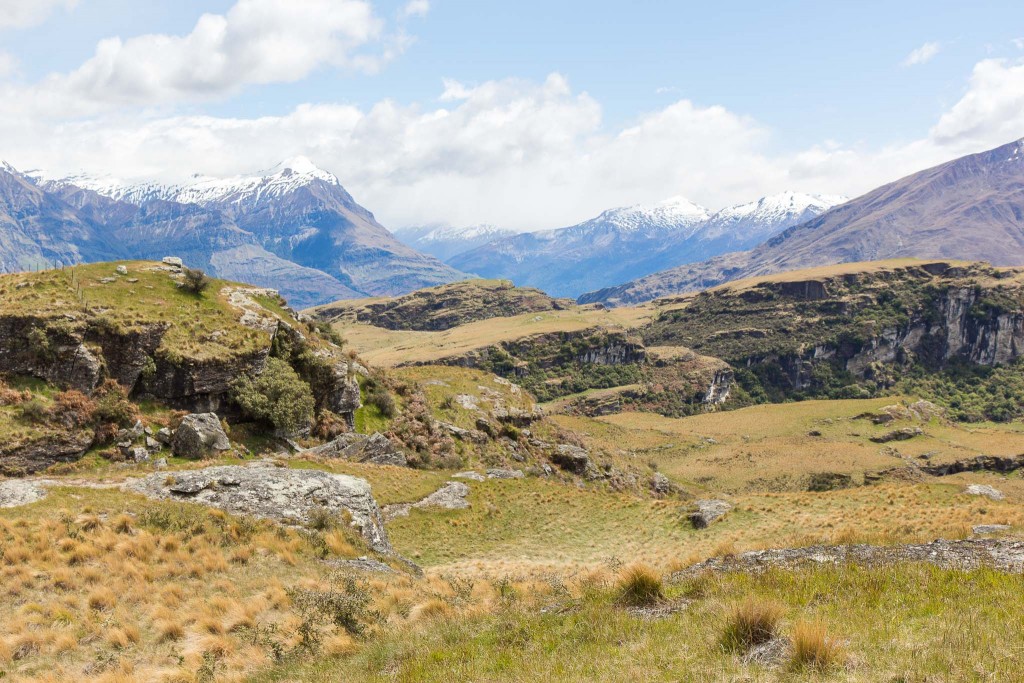 South Africa is a terrific destination and anywhere in the country is a great option for a trip. But I think Stellenbosch is a really special part of it. The wine country has absolutely incredible scenery but, within it all, is everything you would want in a holiday. There are all the wineries to visit, delicious restaurants, activities in nature, and a trendy arts scene. Best of all – it’s extremely affordable for the quality you get and, if you’re based in the Northern Hemisphere, you can easily escape the winter.

Uruguay has long been a forgotten part of South America and, if anything, just a short side trip from Buenos Aires. I think, though, it really deserves to be a destination in its own right. The beaches along the coast are beautiful and many of them can be quiet and relaxing during the summer. The World Heritage List city of Colonia del Sacramento is charming for a night or two. And then the interior has rugged landscapes with cowboys and rural adventures. Get there before everyone else discovers it! Time Travel Turtle was a guest of some of the destinations included in this list but the opinions, over-written descriptions and bad jokes are his own.