Things to do in Krakow, Poland

I’ve written a fair bit about Poland in the past few weeks and a lot of that has referenced Krakow. Not surprising really, seeing as it’s Poland’s second largest city and its most popular tourist destination.

The history draws some people and the culture others. For most, it’s the combination of the two.

As well as being a great cheap place for a night out, it’s also a good base to visit places like the Wieliczka Salt Mine and the Auschwitz Museum.

It was a grey day when I toured Krakow with the wonderful guide, Kasia, (you can check out her website here) but it’s one of those cities that seems to shine regardless of the weather.

As you’ll gather from these highlights, there’s a lot to see.

The main marketplace is a perfect place to start any sightseeing in Krakow. It’s full of activity – from the food vendors, to the market stalls and even the pigeons (when I was there, a woman holding breadcrumbs found herself entirely covered in birds!).

There are some nice cafes, bars and restaurants around the outside which is a great place to sit and watch the local atmosphere. This is the main church in Krakow and has an elaborately decorated interior. It’s right off the main marketplace square and easy to find.

If you’re there on the hour, you’ll hear the trumpeters playing from the tower.

Don’t be surprised if they stop before the end… this is done every time as a tribute to a trumpeter who was shot by an arrow in the 13th century while sounding the alarm of an attack on the city. 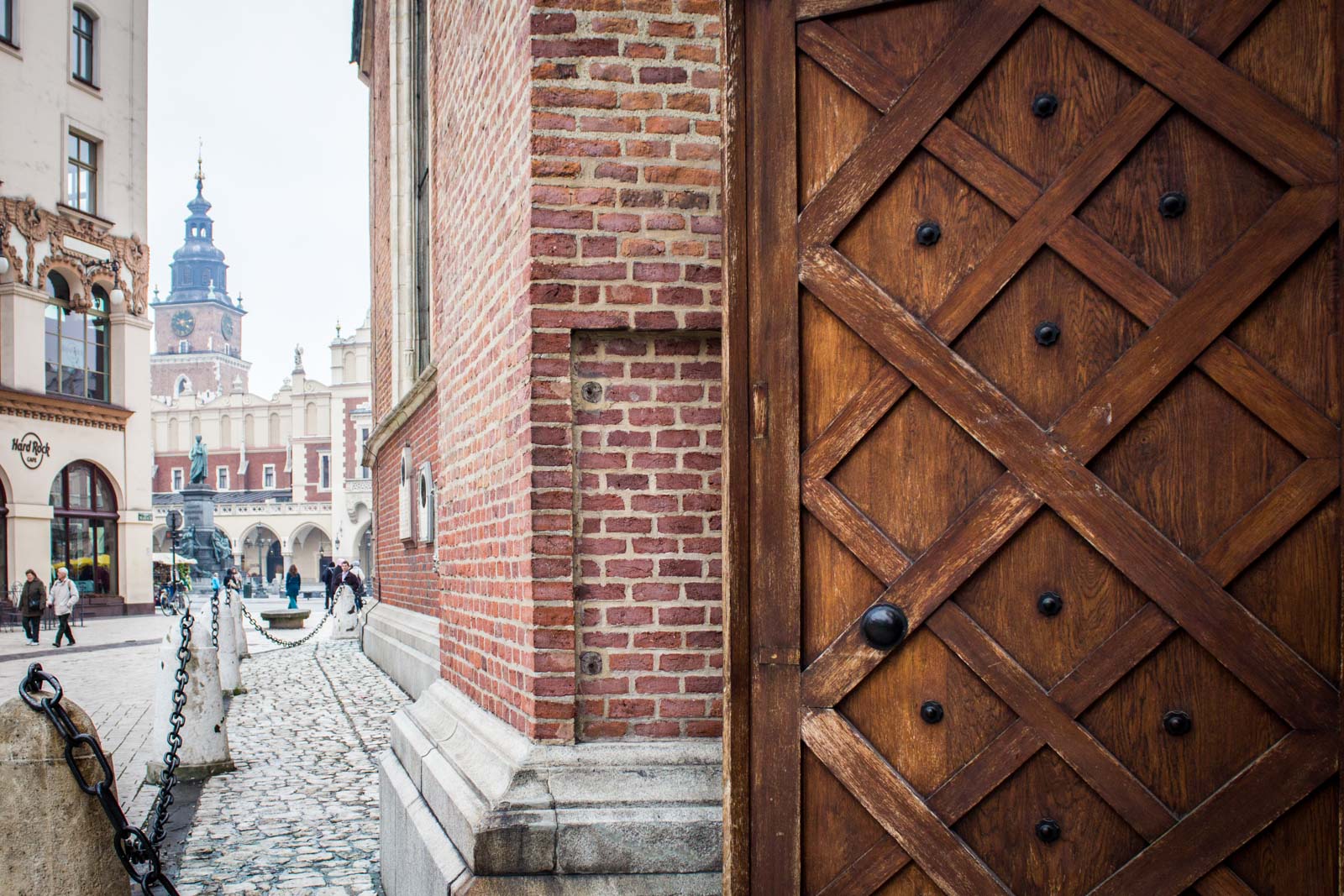 There are more than 180 churches in Krakow and it doesn’t matter how much time you spend walking around the city – you’ll keep finding new ones.

The Wawel Cathedral at the top of the hill is definitely one you shouldn’t miss. Partly because it has… (keep reading…) 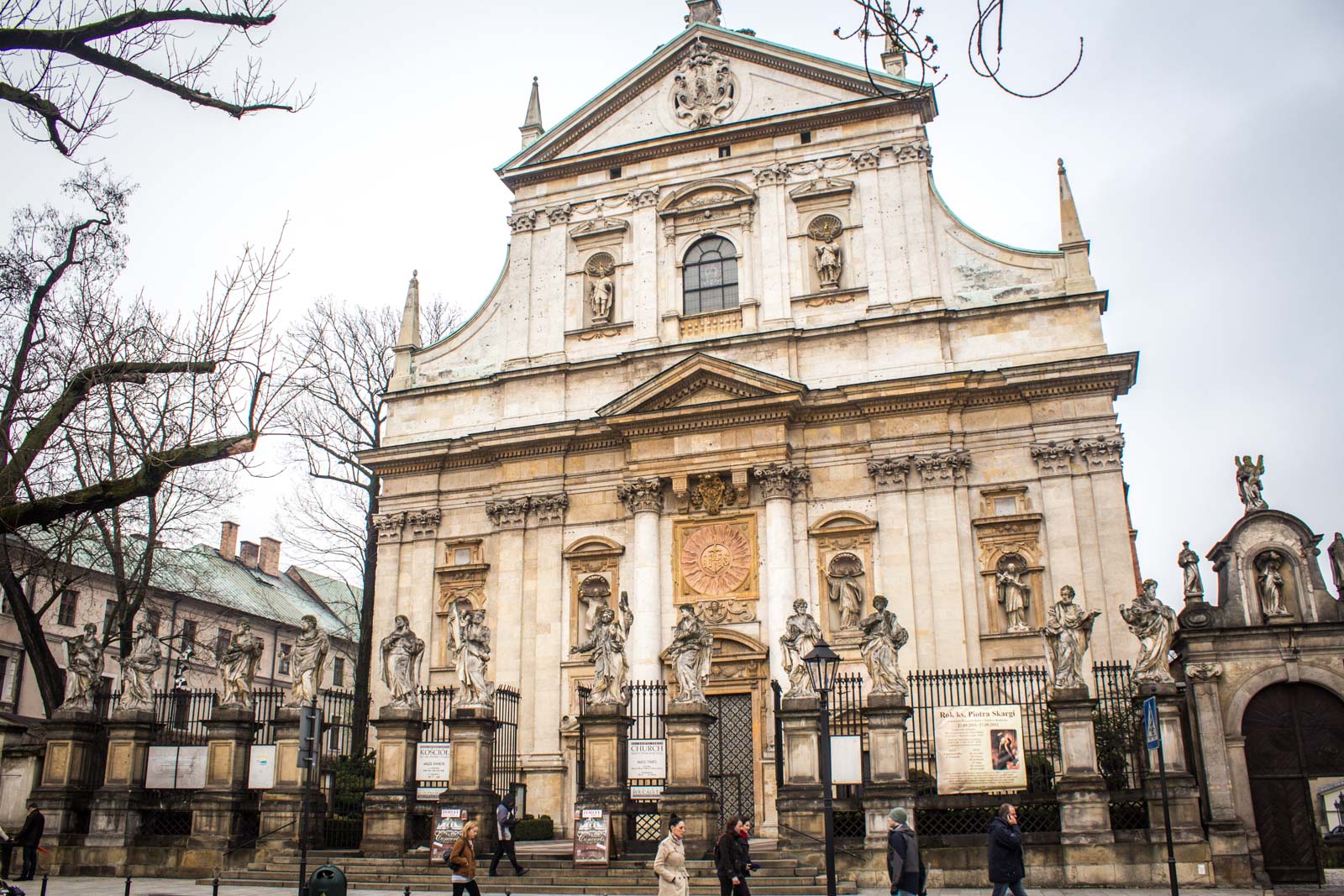 …dragon bones! At first I laughed when someone told me about the dragon of Krakow. What silly superstitions these Polish people have – pfft!

But then I saw the dragon bones hanging at the top of Wawel Hill and I saw the sign pointing tourists to the dragon’s lair at the bottom.

Maybe I was foolish to dismiss the idea so quickly… maybe there really was a dragon nearby. Eek! Also at the top of Wawel Hill is the Wawel castle. When Krakow was the capital city, this was the official residence and one of the finest castles in Europe.

The central courtyard is massive and you can imagine how impressive (and intimidating) it must’ve been to arrive as a foreign dignitary. Not all of Krakow’s highlights are above the ground. You can also go underneath the main marketplace to see the excavations of the old city… the really old city.

In the Rynek Underground museum you can see the what’s left of buildings from more than a thousand years ago. There are even a couple of creepy skeletons there (perhaps left over from the dragon’s dinner). The old historic sights of Krakow are great but there’s always something cool about the recent touches. You’ll find a lot of art instillations around town that, although modern, fit in with the general feel of the place.

Take this enormous head, for example. The best thing about it is that it’s hollow, so you can climb in and have a bit of a rest if you’re feeling tired (disclaimer: I don’t know if you’re actually allowed to climb in, but other people were doing it, your honour).