There aren’t many reasons tourists take the road south from Surabaya.

To be fair, there aren’t many reasons tourists would even be in Surabaya in the first place, but let’s overlook that for now. Because the city is the staging point for the 120 kilometre journey down East Java to one of Indonesia’s most beautiful natural attractions.

I’m talking about Mount Bromo, the active volcano that lies in the middle of a large valley. With its top blown off, it appears more crater than mountain, while putrid sulphurous gas and smoke billow out from within. 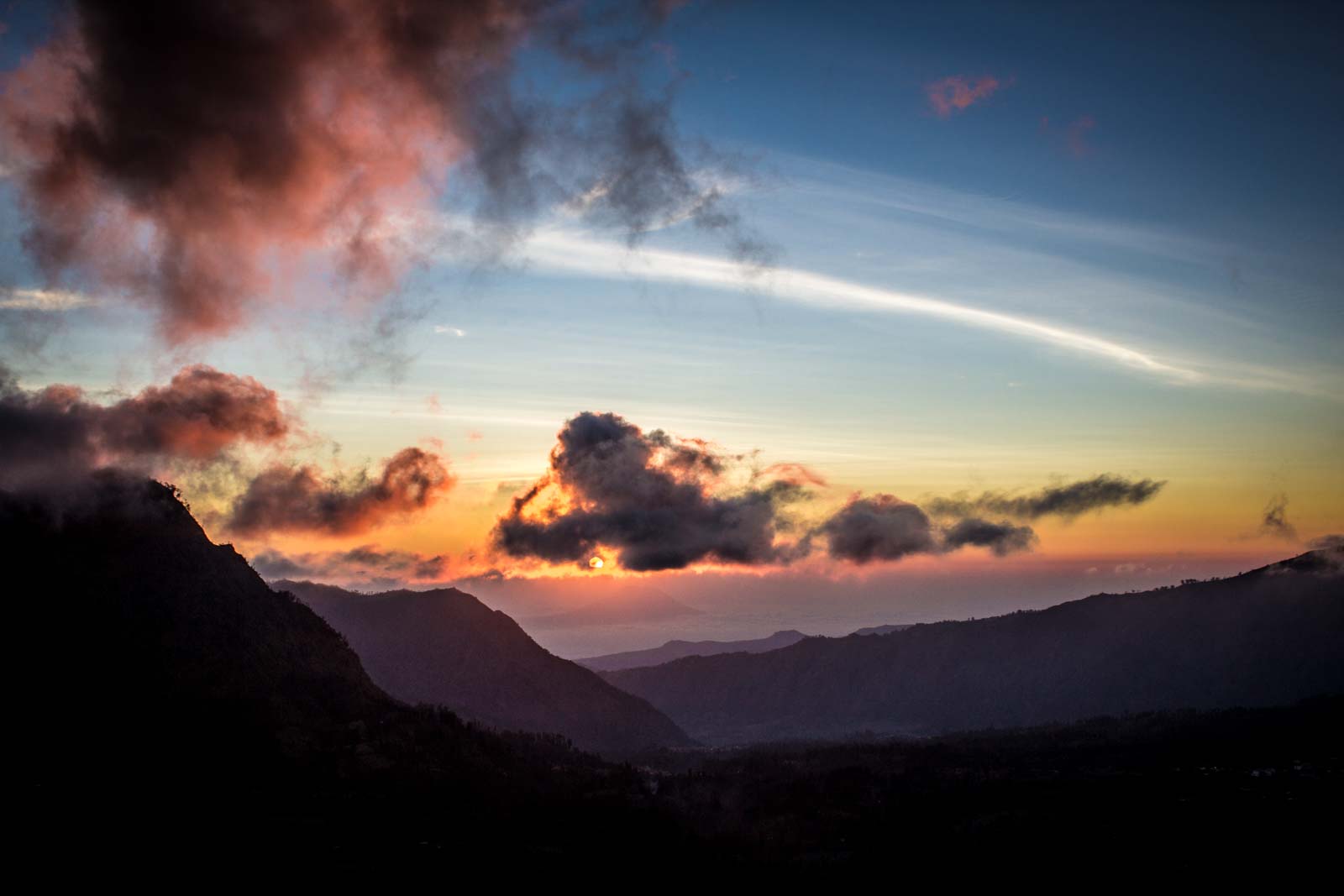 One of the reasons it has become such a popular site for visitors is that Mount Bromo doesn’t exist in isolation.

The valley is actually a ‘caldera’ – an enormous cauldron-like pit created by the ground collapsing after a major eruption. And all through and around this caldera are the remnants of volcanic action of the past… and the ominous signs of more to come. 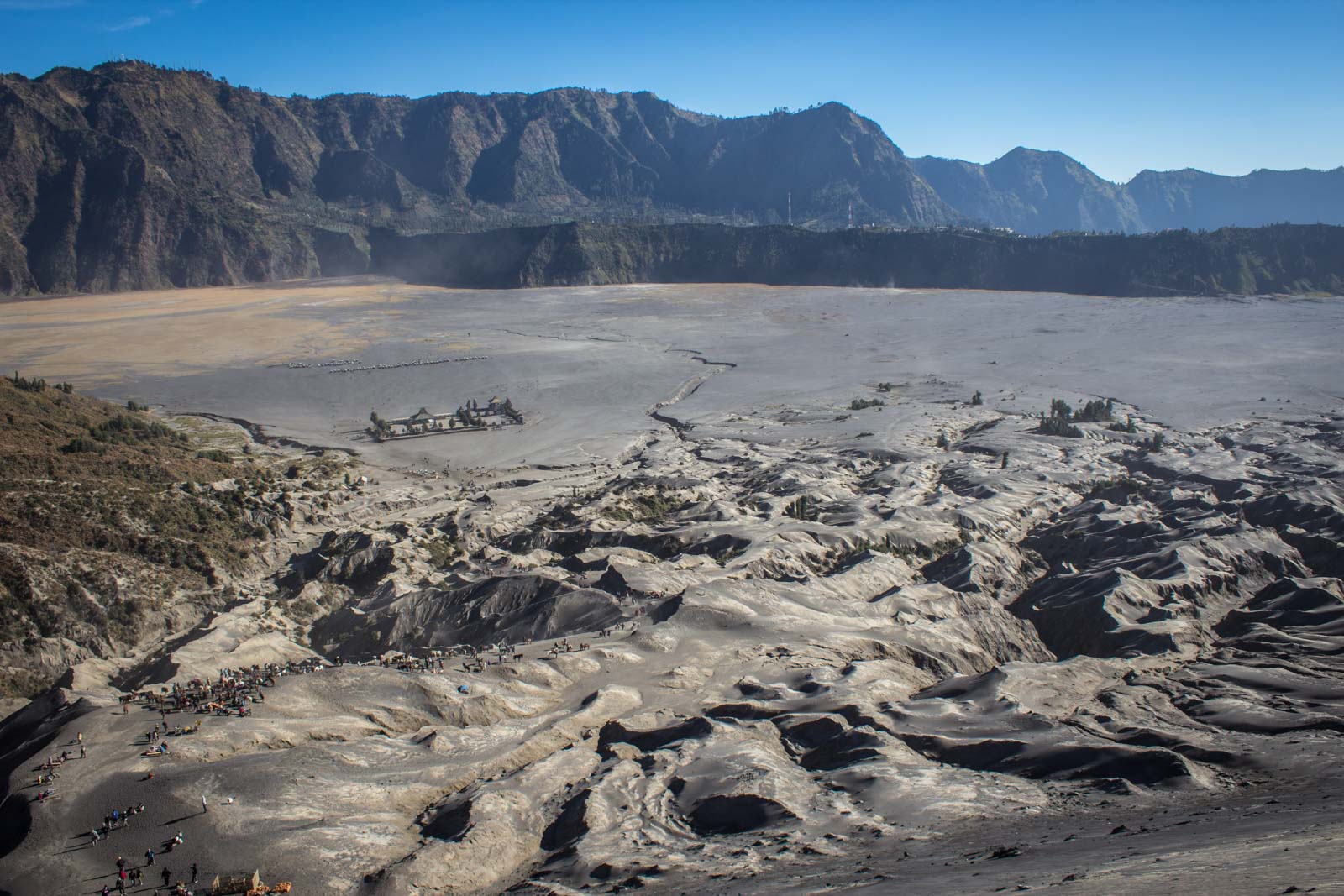 Most people start their visit well before the sun is up, in preparation for the sunrise. In a convoy of jeeps (the road is too bad for anything else, so the jeep cartel owners tell me), we head towards a nearby mountain, Mount Penanjakan.

From the end of the road, it’s a twenty minute climb to the viewing area, although dozens of locals with horses will gladly accept some money for a ride up.

I had been warned that it would be cold at the top, but I think that must have been by Indonesian standards because, although the rays are yet to reach out across the terrain, it is far from chilly. 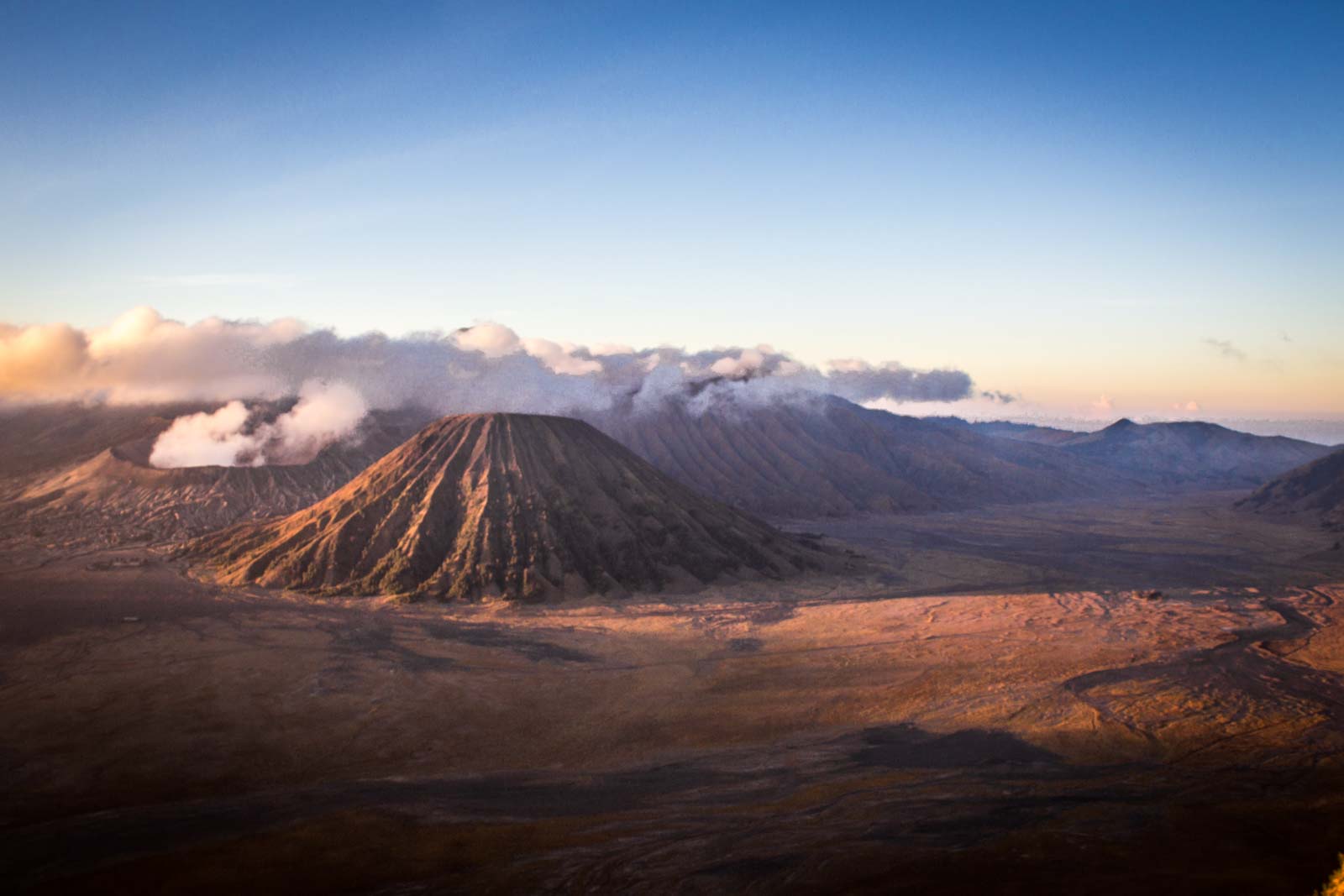 As the sun rises, the clouds are the first to catch the colour. Red. Pink. Orange. Then the valley starts to glow.

The shadowy outline of the mountains come into the focus and vista across the whole area is suddenly bathed in light. It is a good way to start the morning, indeed. 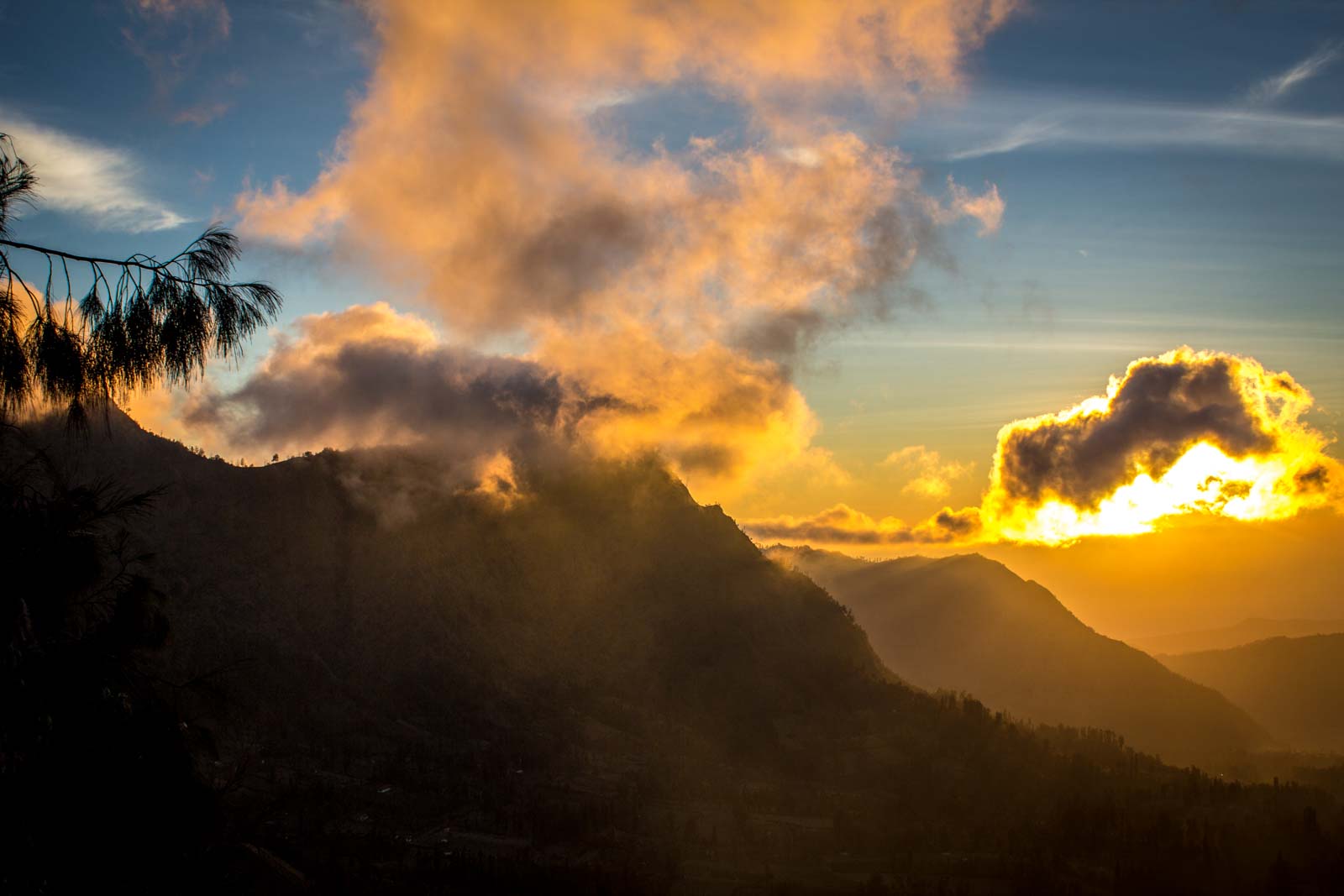 An hour later, down at the base of Mount Bromo itself, I am confronted with the ‘sand sea’. It was hard to get perspective from the viewpoint but now, as I am forced to quickly shield my face as a wind gust tries to blast grains into my eyes, it feels like something from Africa or the Middle East.

The only vegetation is up on the cliffs around the caldera, watching fearfully down at this barren landscape. These are the wastelands of East Java, the plains poisoned for eons by volcanoes, a dangerous ghetto of sulphuric solitude. 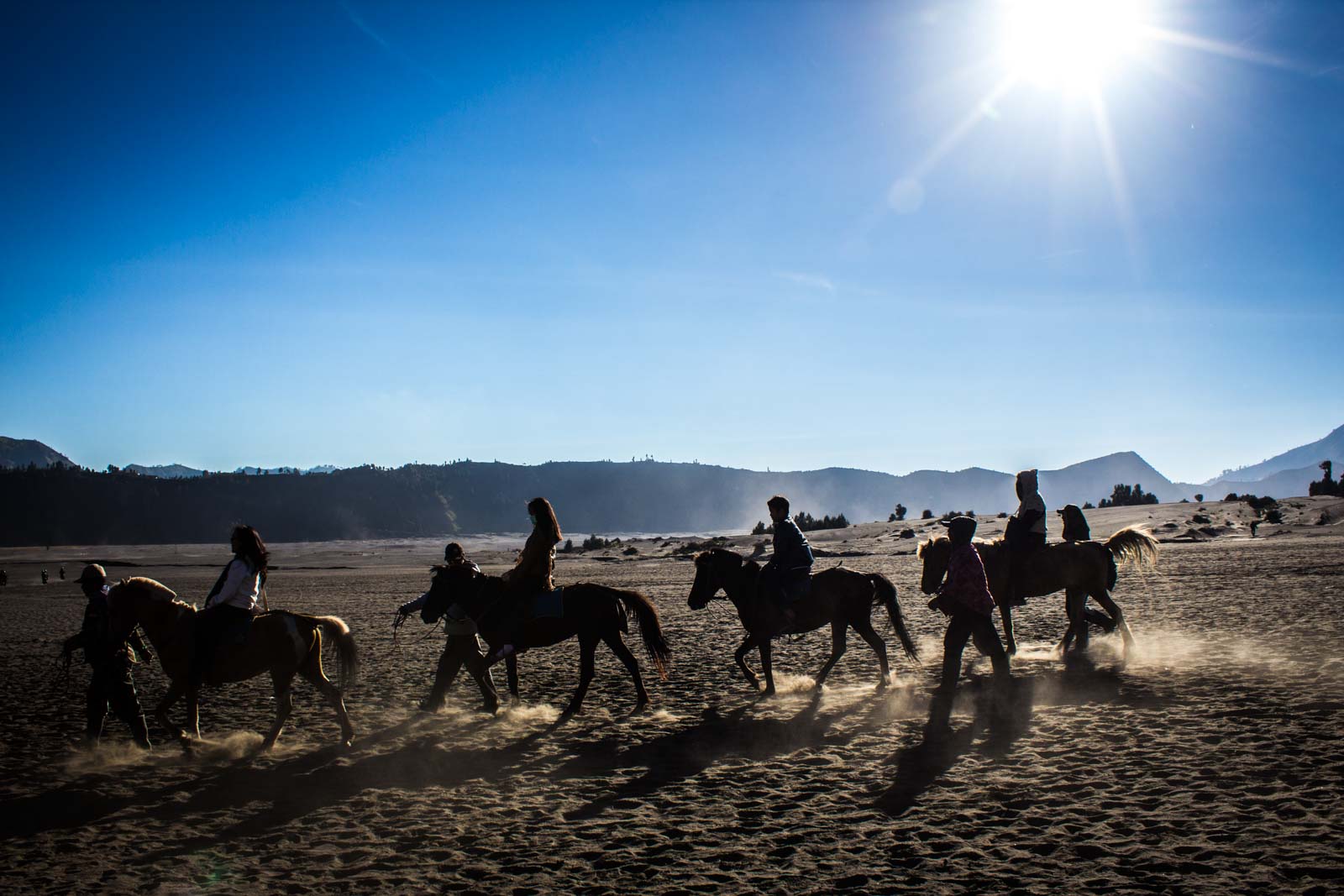 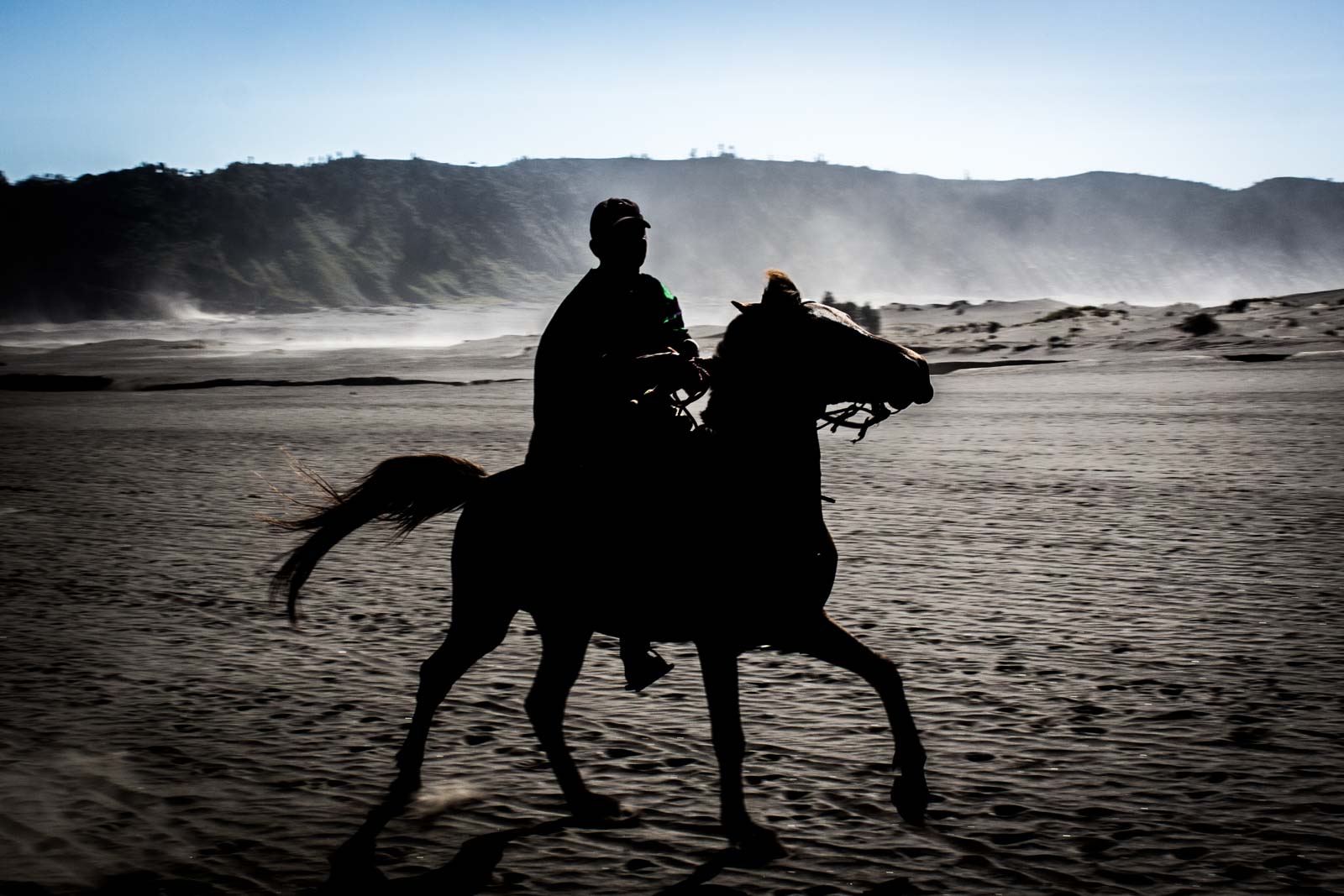 But again, there are horsemen here. While many visitors choose to walk the 30 minutes or so to the top of Mount Bromo, there is once more the option of going on horseback.

The riders, covered up to protect themselves from the sandstorms, have an eerie and romantic ruggedness to their appearance. A Hindu temple set against the grey landscape demonstrates their connection to this region. 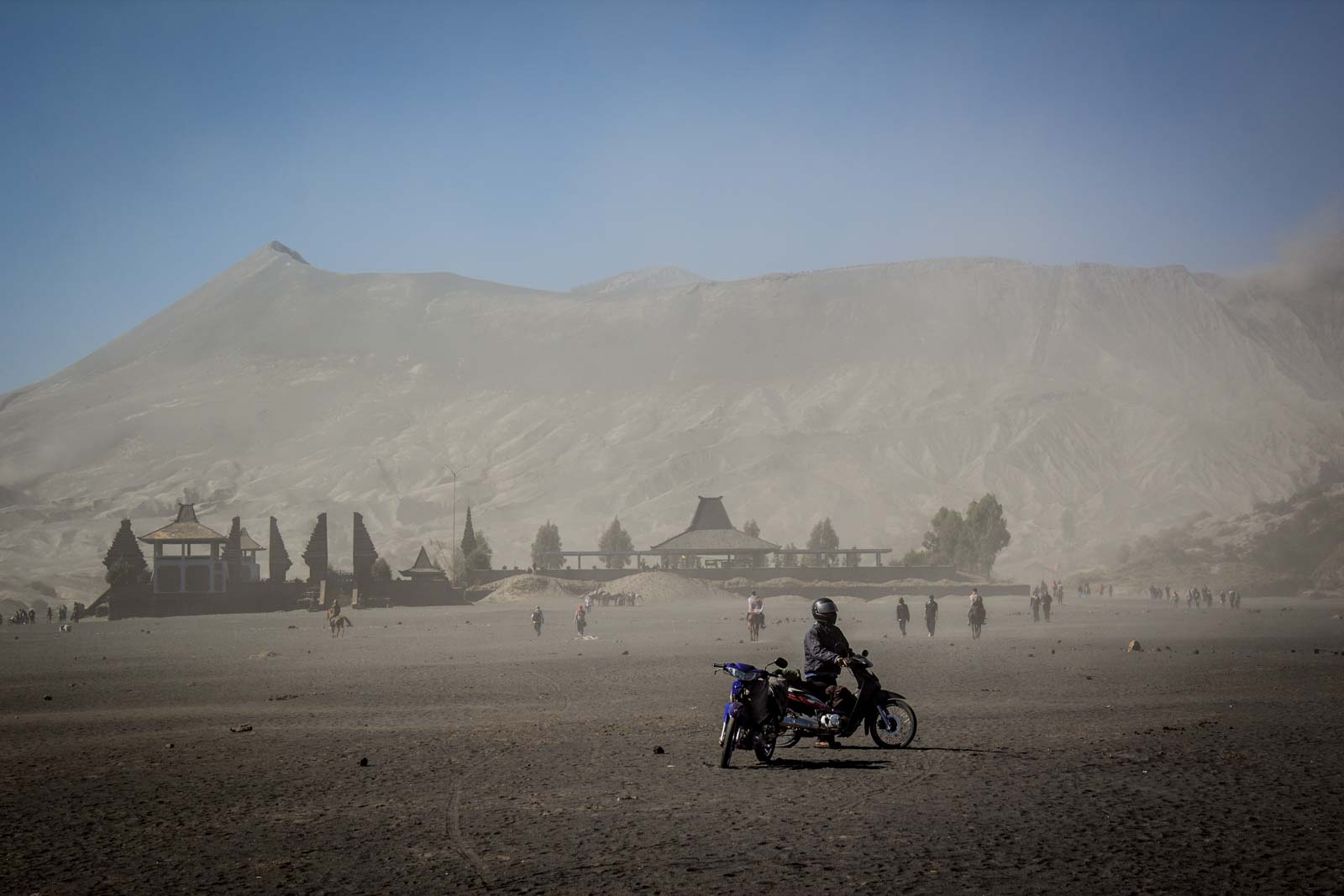 At the top itself, there’s only so much to do. The gases coming from the crater are quite overpowering and at times it’s a bit uncomfortable to stand at the edge and look down.

Sudden bursts of strong wind blow a concoction of smoke and sand right into my face. But to look down into the volcano makes me feel a bit insignificant. 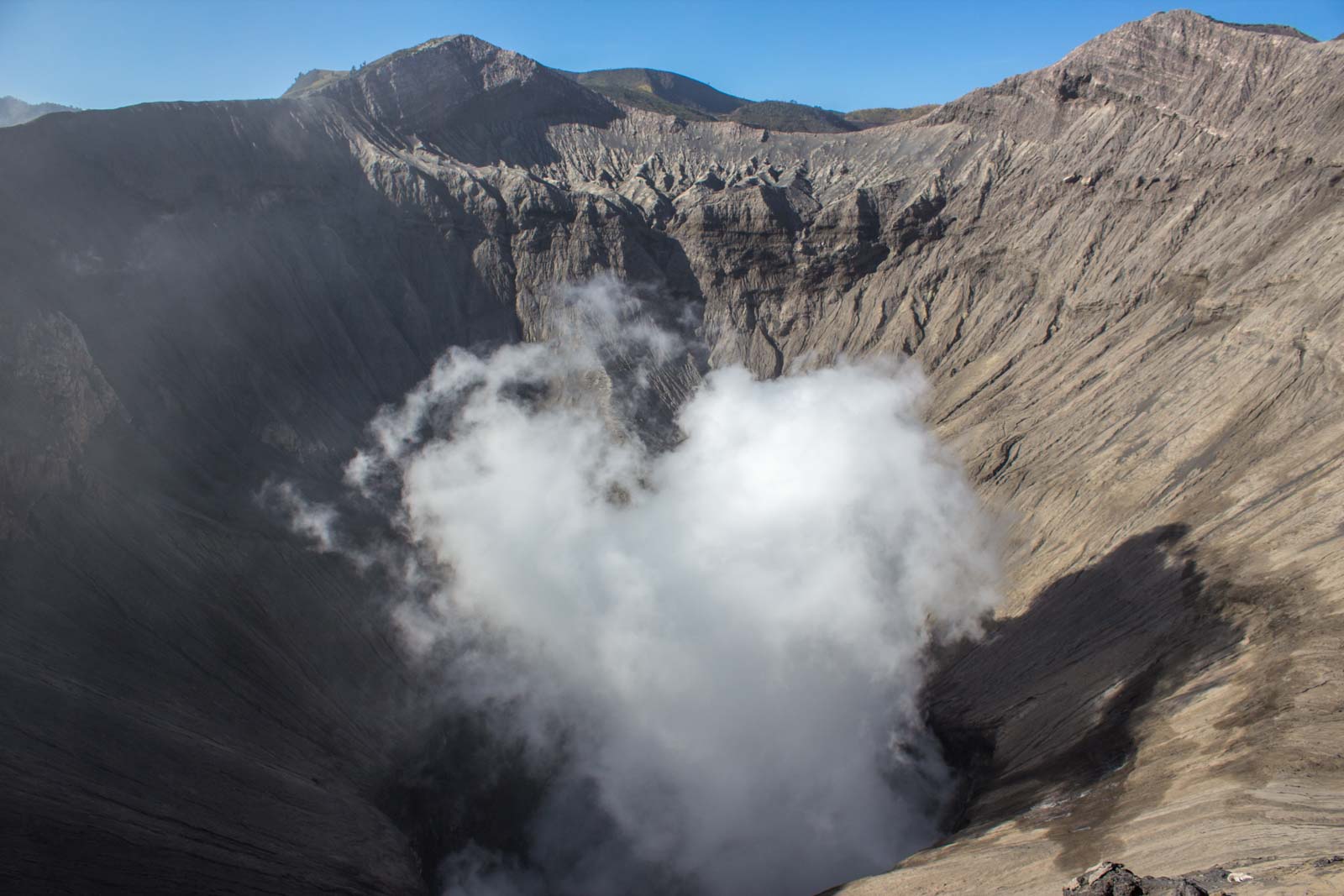 This is a unique part of the country. It’s more than just a volcano – it is a whole tract of land which has evolved over the millennia from the geological activity beneath it. It’s created a natural phenomenon much larger than any tour can do justice.

It just feels… special… to be here.