Who amongst us really like to think about where our food comes from? As long as it appears clean and tasty on our table, that’s all that matters. And sometimes – like in the restaurants of South East Asia – it’s often not worth the mental anguish of wondering what’s going on in the kitchen. It will be delicious – tick. It won’t make you sick – tick. So who cares about anything else, right?

Well… in this case, wrong. But only because this is one of the most fascinating and visually-interesting kitchens I have ever seen.

Gudeg Yu Djum is one of the most famous restaurants in the Indonesian city of Yogyakarta. It’s not fancy – there are no stars or hats or pretensions associated with it. But it’s known across the city for doing one of the region’s most popular dishes well. The dish is called ‘Nasi Gudeg’ and it’s essentially boiled jackfruit covered in a coconut milk sauce, served with rice, chicken and a hard-boiled egg. This is what it looks like (after a few bites): 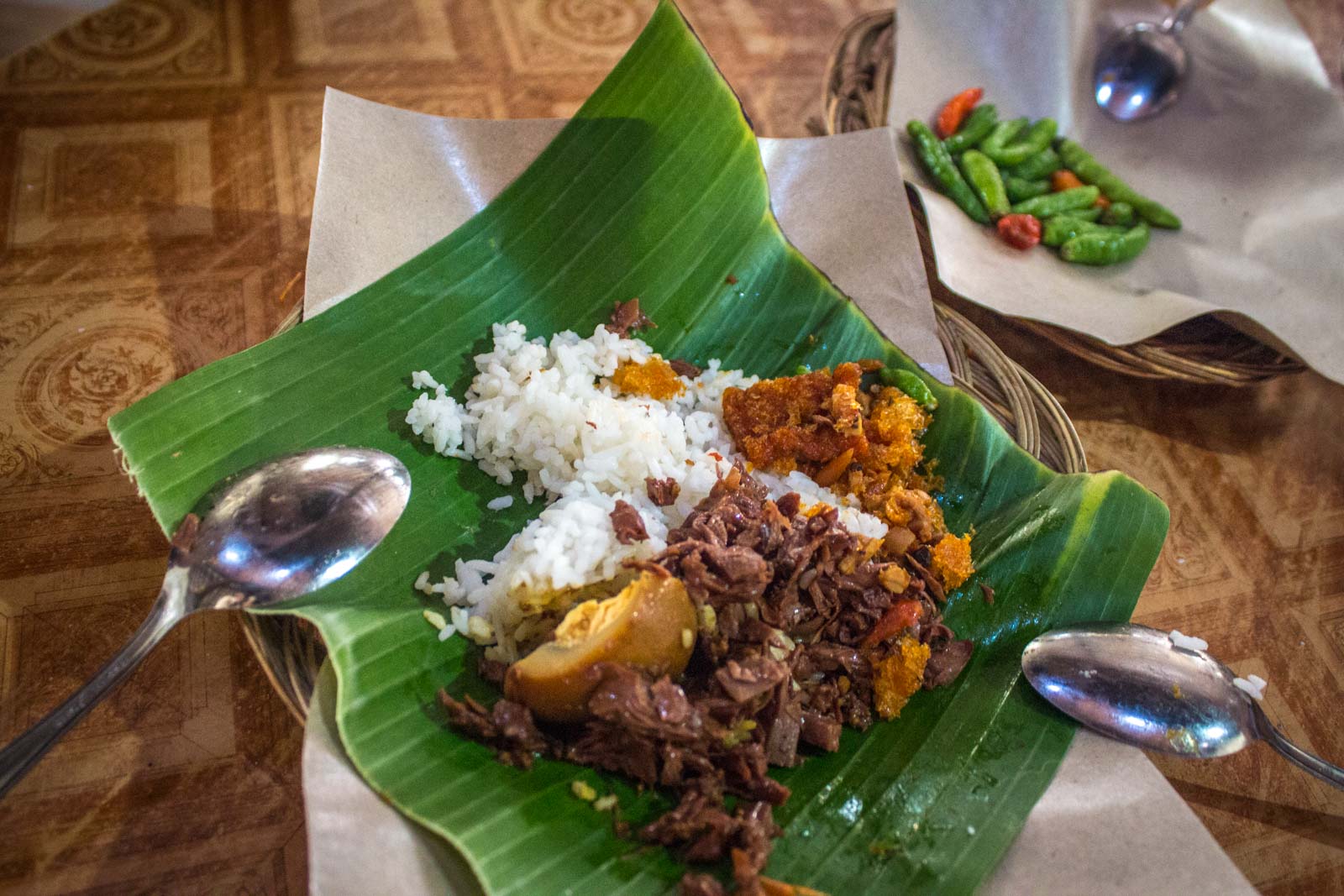 But the bright and clean meal comes from smoke and darkness, from a burning cavern behind the scenes. In this photo essay, allow me to take you inside the kitchen of Gudeg Yu Djum and show you how the meal is prepared… the same way it has been traditionally prepared for generations.

Here the ‘gudeg’, the main ingredient is being cooked. It’s made from sliced young jackfruit which is being boiled in these large pots. They have water mixed with brown sugar and salt in them, and will be left on the fire overnight for more than 12 hours. This man is painstakingly extracting coconut milk from fresh fruit by hand. Coconut will be a key ingredient for two very important elements of the meal. In this large pan near the fireplaces, coconut milk is being simmered to reduce the liquid until it turns thick. The result will be sauce called ‘arek’ which will be combined with the boiled jackfruit to make the gudeg. A separate room at the back of the restaurant is the only space of the kitchen that has electric lighting. Half a dozen people are cleaning and dividing whole raw chickens. One of the women gestures at everyone in the room and tells me they “are all family”. 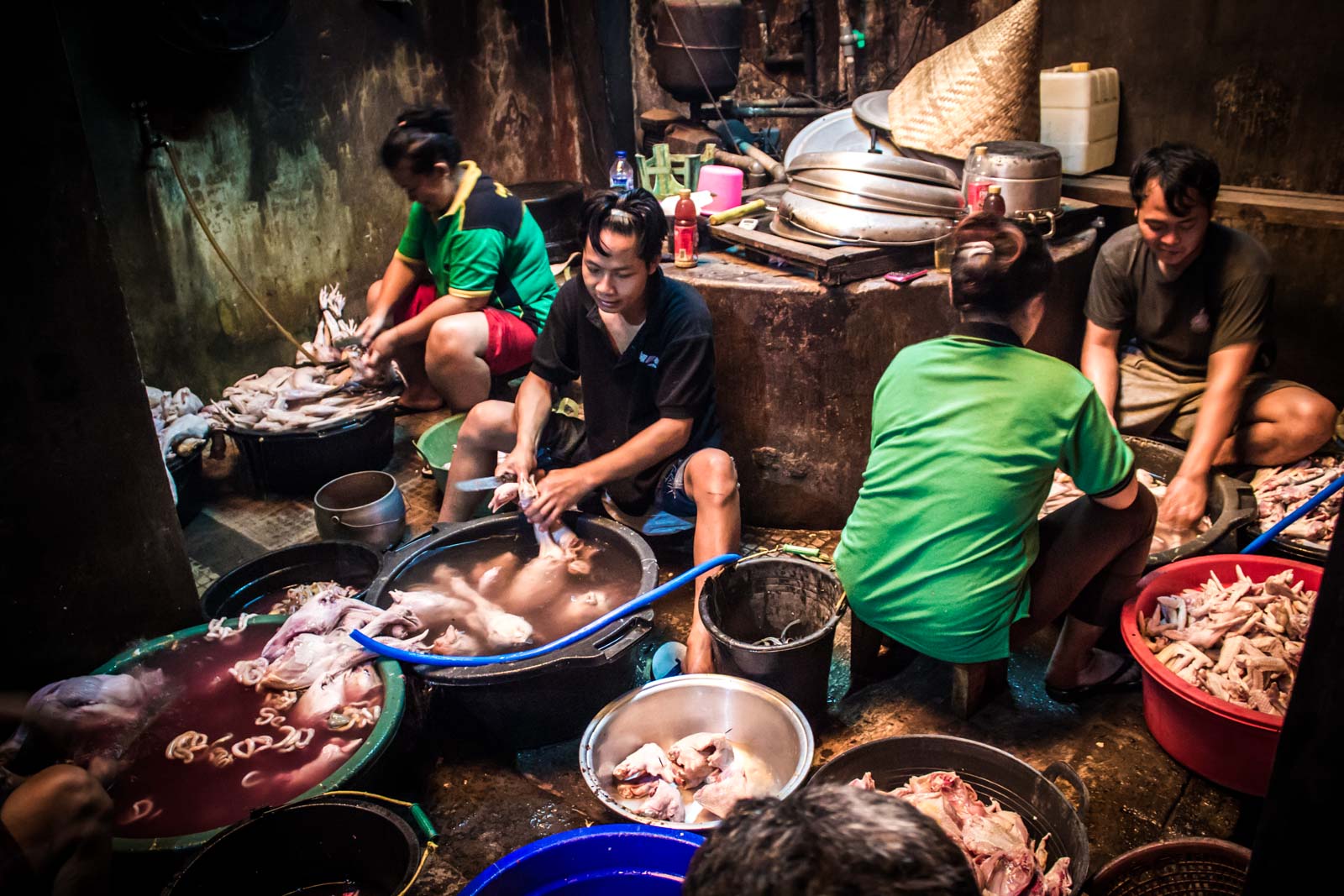 These large pots above open fires are being used to make ‘santan’, which is a sauce of coconut milk mixed with salt, shallots and a bit of sugar. The heat in this room is extremely high so this man is working with his shirt off. Away from the heat and near a breeze, this elderly woman is preparing chillis to be served with the nasi gudeg. 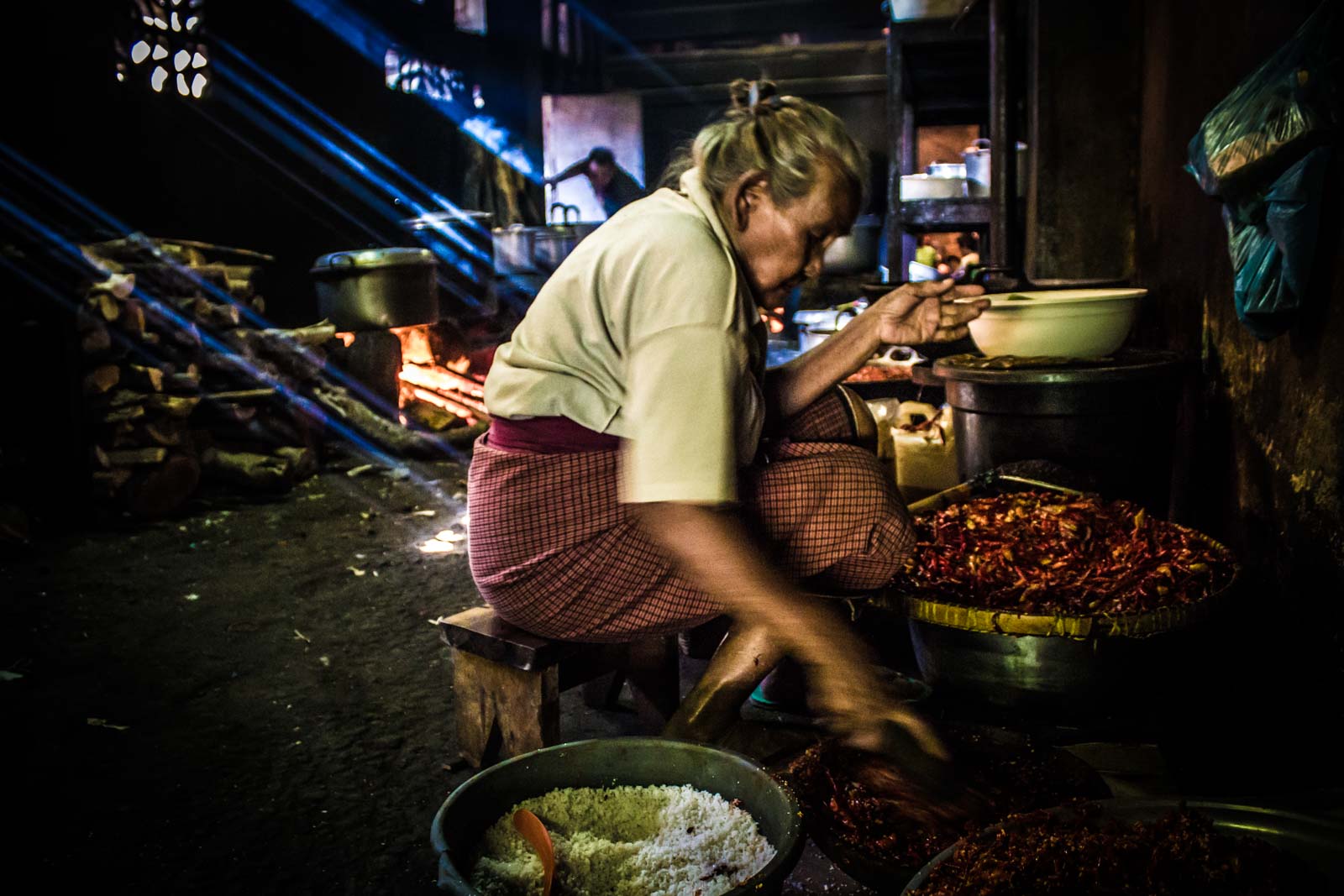 And here, in the section of the kitchen with the most natural light, a woman is sitting solitary and silent while she rips apart banana leaves. They’ll be used for the presentation of the meal. And that’s it. A lot of effort clearly goes on behind the scenes in the spacious and sprawling kitchen area of the restaurant. Hours and hours of work for a dish that is consumed within minutes. But it is tasty… very tasty, in fact. Which you hope makes it all worthwhile.

There are lots of cool hostels in Yogyakarta, but I would recommend either Snooze Guesthouse or The Cubic Jogja.
A couple of good cheap and comfortable options are OYO 347 Bayang Brothers Residence and Aloha Hotel Yogyakarta.
For some ecofriendly accommodation, there's the affordable Greenhost Boutique Hotel in town or the Yabbiekayu Eco-Bungalows just out of the centre.
And for some luxury, I would recommend the Sofia Boutique Residence.