It was on the third night of driving that I finally gave in, my eyelids heavy and the rest of my head throbbing from a lack of sleep.

Despite wanting to stay conscious, fatigue beat good intentions in what had become quite a battle of attrition… and I fell into a slumber, rocked by the movement of the van.

Don’t worry. Before you panic, you need to know I wasn’t behind the wheel of the van – the twenty year-old blue and white Chevrolet van that guzzled the gas but made up for that greed with a generosity of space and comfort.

No, the driving duties had fallen to TJ, the nomadic musician who was in a rush from Los Angeles to Chicago, and had picked me up as quickly as he’d picked up speed on the desert highways.

We were strangers to each other, but we had come together for a journey across the country. 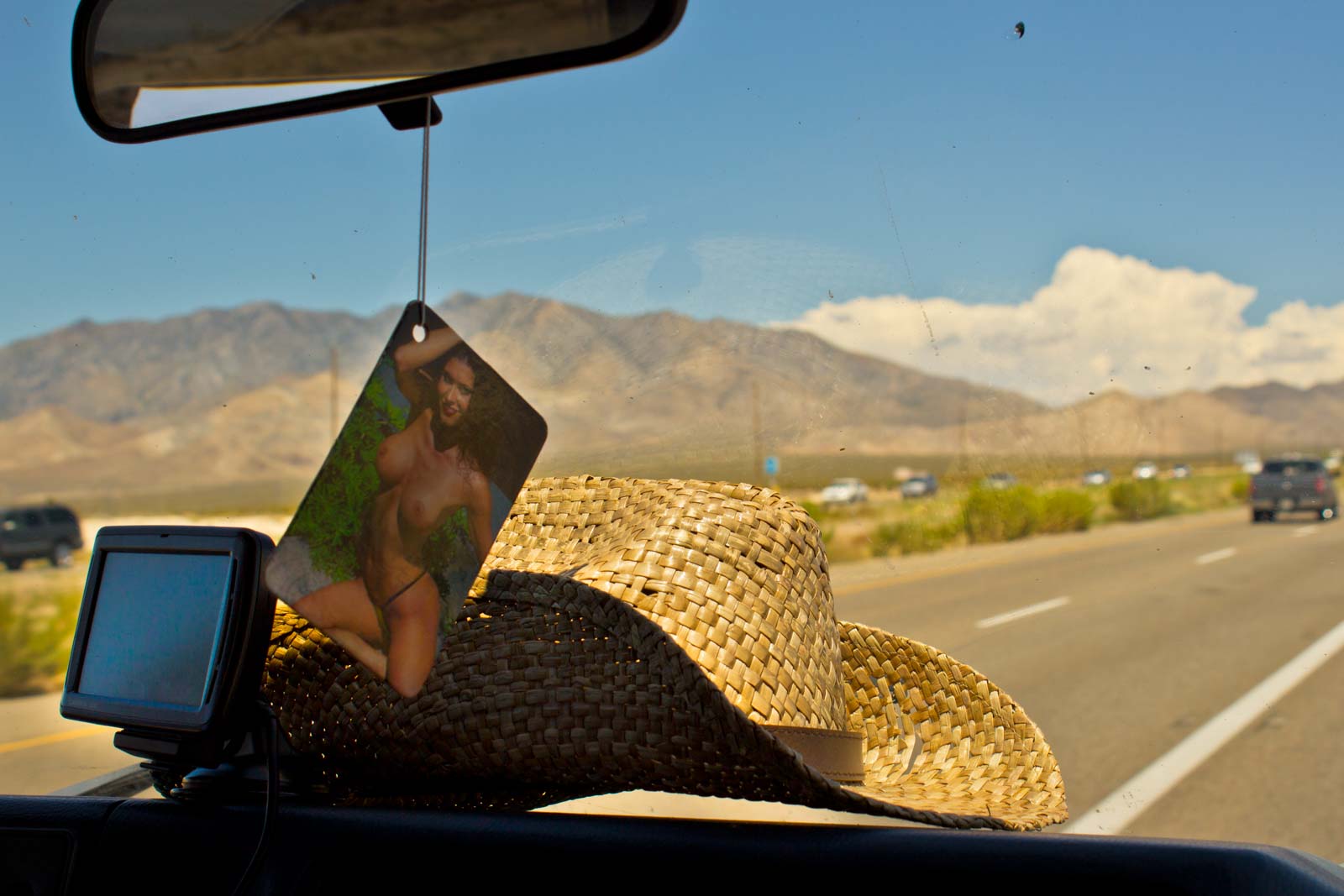 For almost 60 hours straight we drove across the United States, stopping only briefly and occasionally for rest, normally stealing just a couple of hours under the starlight before returning to the road.

Even the incident with a missing wheel couldn’t stop the inertia of this mission for long.

>> Read my story about the missing wheel

My desire to stay awake was mainly about wanting to provide company for the driver, a distraction for him from the monotony of the grey line stretching out in front.

Secretly, though, staying awake and alert was also a survival instinct.

You see, I had met TJ online only a day earlier and I wasn’t convinced I wouldn’t be murdered and chopped into small pieces.

It had only been minutes into our trip when, referring to a small coolbox in the back of the van, he’d said, “that’s for at least one of your kidneys”.

The posting on craiglist had sounded like a bit of a fun escapade: “We will be riding in style in my 1991 Chevy G20 Van named Elizabeth Taylor,” it said.

Followed a few sentences later by, “Attach a picture or your facebook link so I know you aren’t a nut. Or are at least the right kind of adventurous nut.”

It’s funny how these things always seem so one-sided. At no point did I ask for evidence that he was not a serial killer. It turns out he wasn’t a mass murderer (or, at least, not during the time we spent together).

TJ could probably be best described as a drifter, although it’s his attitudes and activities that he drifts through more than his geography.

During our long and numerous conversations I learned he’s performed in bands, organised music tours, driven a taxi, worked at a car yard, and even done graphic design for a DVD company.

He’s spent the past few months in Los Angeles but was born and raised in a small city in Nebraska. On one of his arms he has tattooed an outline of a map of Nebraska.

I ask if he’s proud of being from Nebraska and he explains that he has the tattoo to remind him there’s nothing there for him anymore.

To be honest, I was a bit uncomfortable by the raw honesty and I hesitated then chose not to point out that we were driving straight towards his hometown.

As we rolled along I glanced, alternately, from the view ahead, to the view to my side, and to TJ driving.

It was slightly disconcerting to watch him behind the wheel because he often didn’t use his hands to steer it. A knee kept us on track as he typed on his phone, glancing up through the windscreen too infrequently for my liking.

The same knee also guided us while he played a ukulele and sang a soundtrack for our trip. For some reason he’d started singing songs himself after I’d been in control of the ipod for a while. 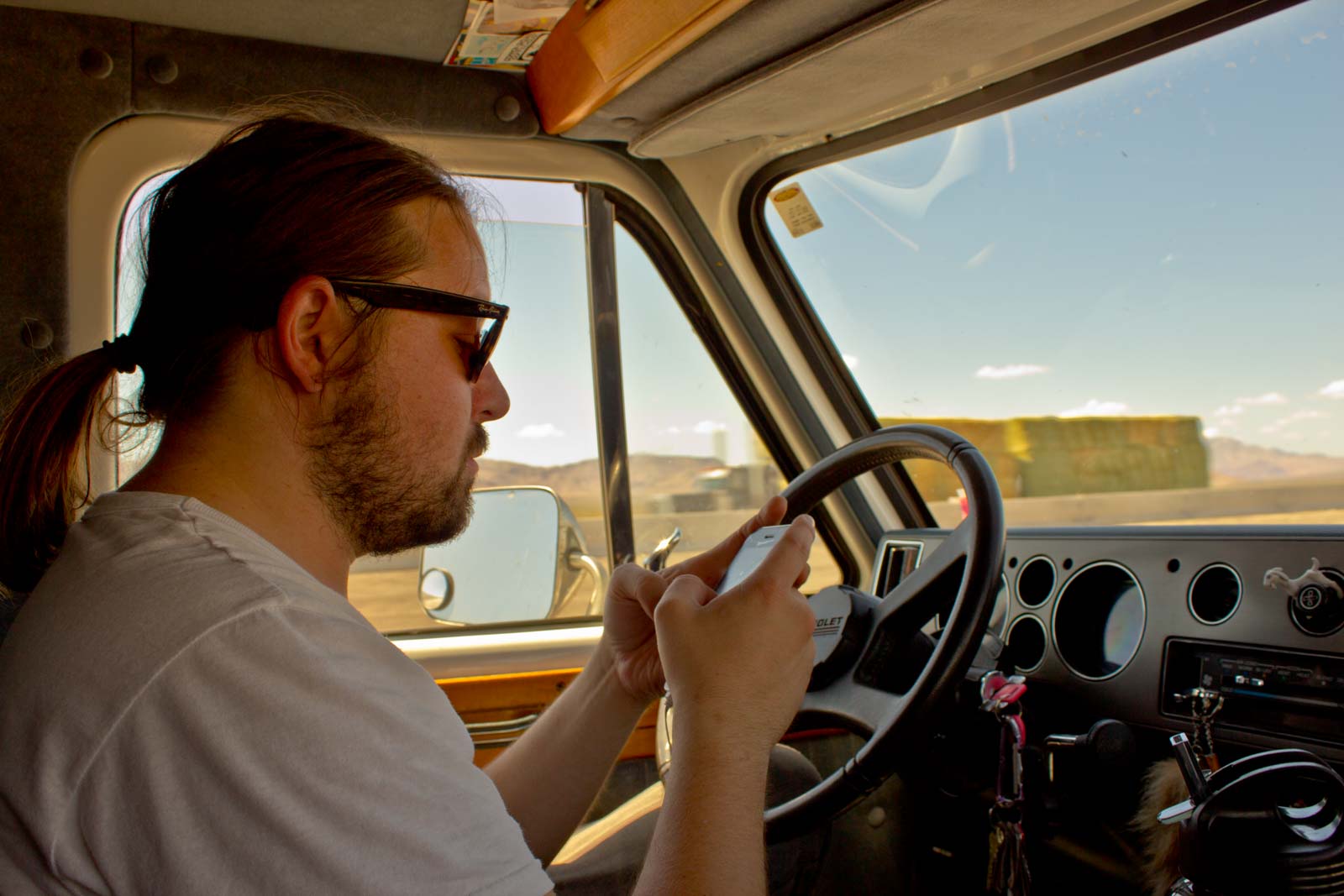 The journey took us through the sparse endless deserts of Nevada, the rust red stone turrets of Arizona, the unexpected natural beauty of Utah, the mountains of Colorado with white tips that belied the heat closer to the ground, and the lush green agriculture belt of Nebraska.

We stopped only ever briefly, but I was able to catch glimpses of the people who lived in the areas we were using merely for transit.

These towns, these cities – even these truck stops – were also their homes and their lives, yet we passed through them like they were green light intersections. TJ and I did talk to Savannah, a waitress in Barstow who grew up in the town and has lived there ever since.

She must’ve been in her early twenties and has a young child but no boyfriend – a fact she told us is quite well-known because the regular diner customers like to tease her about it.

I felt bad because TJ managed to convince her he’s English, even though he has a strong American accent and the aforementioned tattoo of Nebraska.

There was also the owner of the shop in eastern Colorado with the sticker “So, how’s that Obama thing working out for you?”.

We had to buy some gas there but TJ refused to get anything else because he didn’t want to support ‘racists’.

He wasn’t basing that on the sticker, I don’t think. More just on the fact they lived in eastern Colorado. Ultimately, this was an adventure that, for me, had a lot more to do with the act of travelling than the places we were travelling through. It was far too quick to really experience that heartland of America.

But I’ll tell you what, I’ve got a much better perspective of what it’s like to be a trucker after drinking that much coffee from gas stations, eating a heap of sandwiches from fast food stores and sleeping in a van on the side of the road.