There are three different locations that make up this World Heritage Site in Trebic.

Religion has caused so much conflict over the years. So it’s always nice to find examples where different faiths have lived together in harmony. Even if not everything seemed fair at the time.

In the small Czech city of Třebíč in the Czech Republic, three locations have been collectively named as a World Heritage Site – the Christian church of St Procopius Basilica, the Jewish Quarter and the Jewish Cemetery.

All are within metres of each other and have been for centuries… during a time of great global conflict between the two religions. 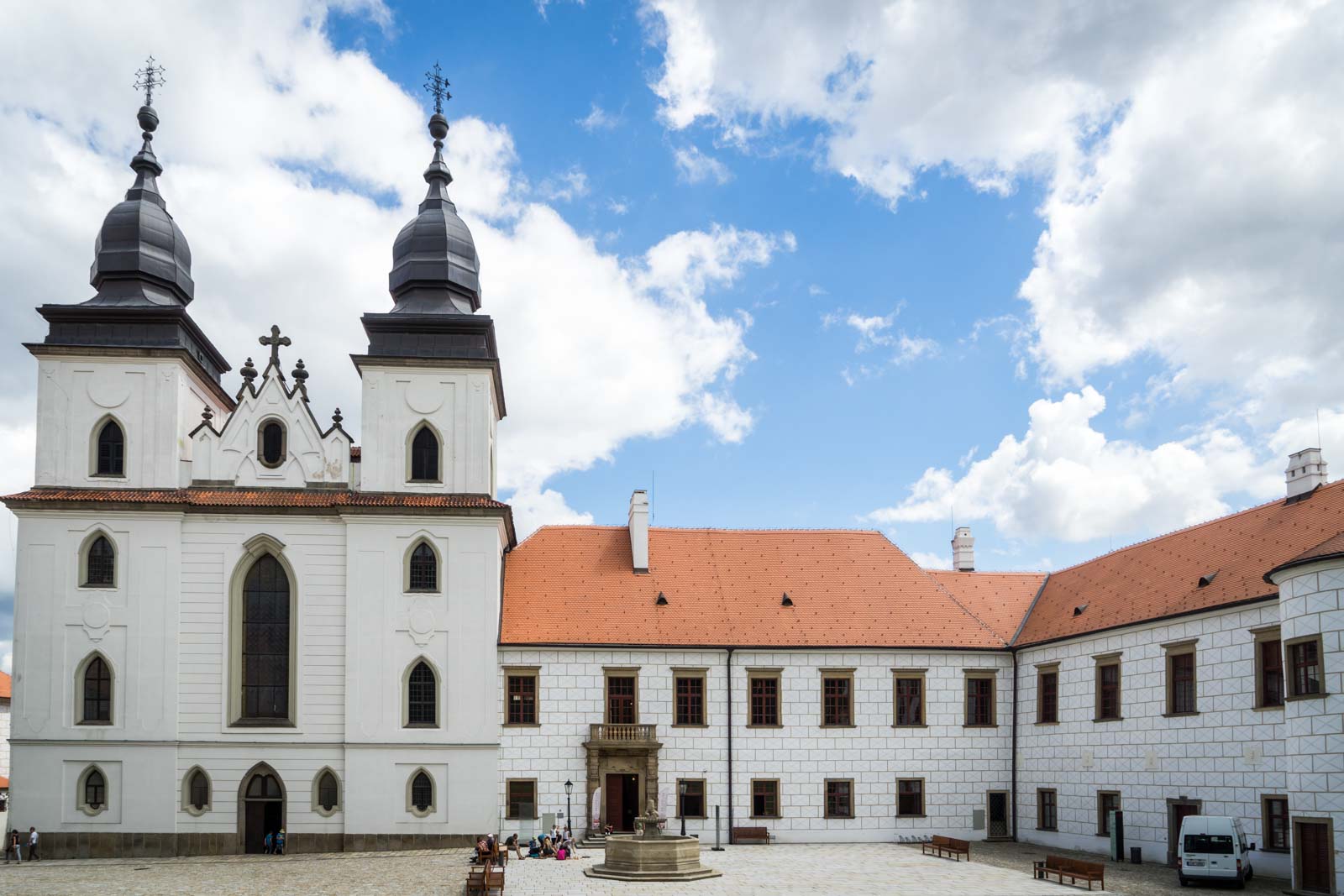 St Procopius Basilica came first. It was built between 1240 and 1280, after originally being part of a Benedictine monastery.

It was regarded to be so important that the city of Třebíč was founded around it to support the commercial needs of the residents. 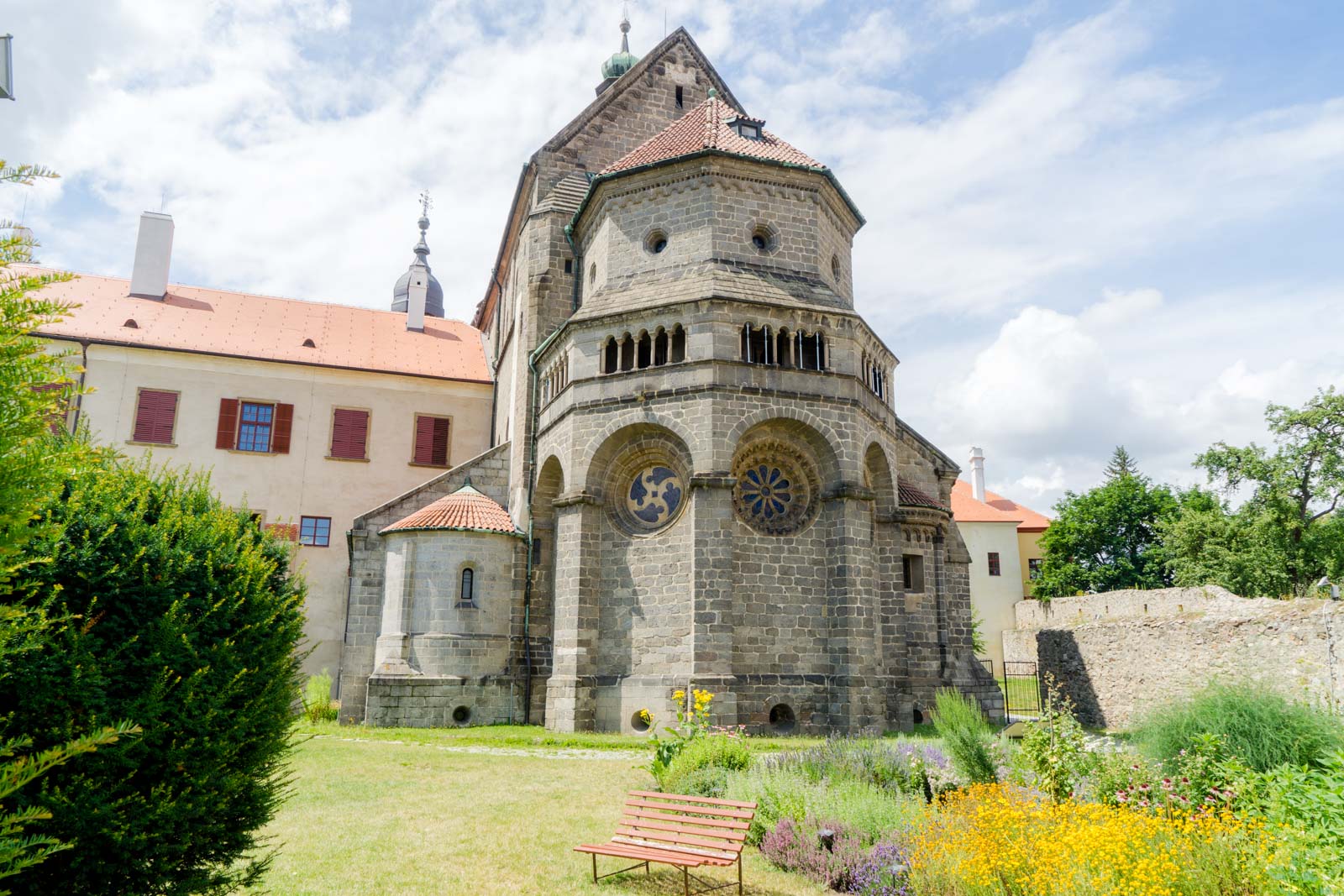 It stands on a slope above the town, with views down to the river that cuts through the urban centre. From below, you can see the grand shape of the building, Romanesque with some Gothic features. Going inside (which you can only do as part of a tour), you first pass through the door with incredibly-detailed stone carvings all around.

Inside, the church has the feel of harsh stone that is typical of the time but is decorated with golden artworks and glows purple from the stained-glass windows. 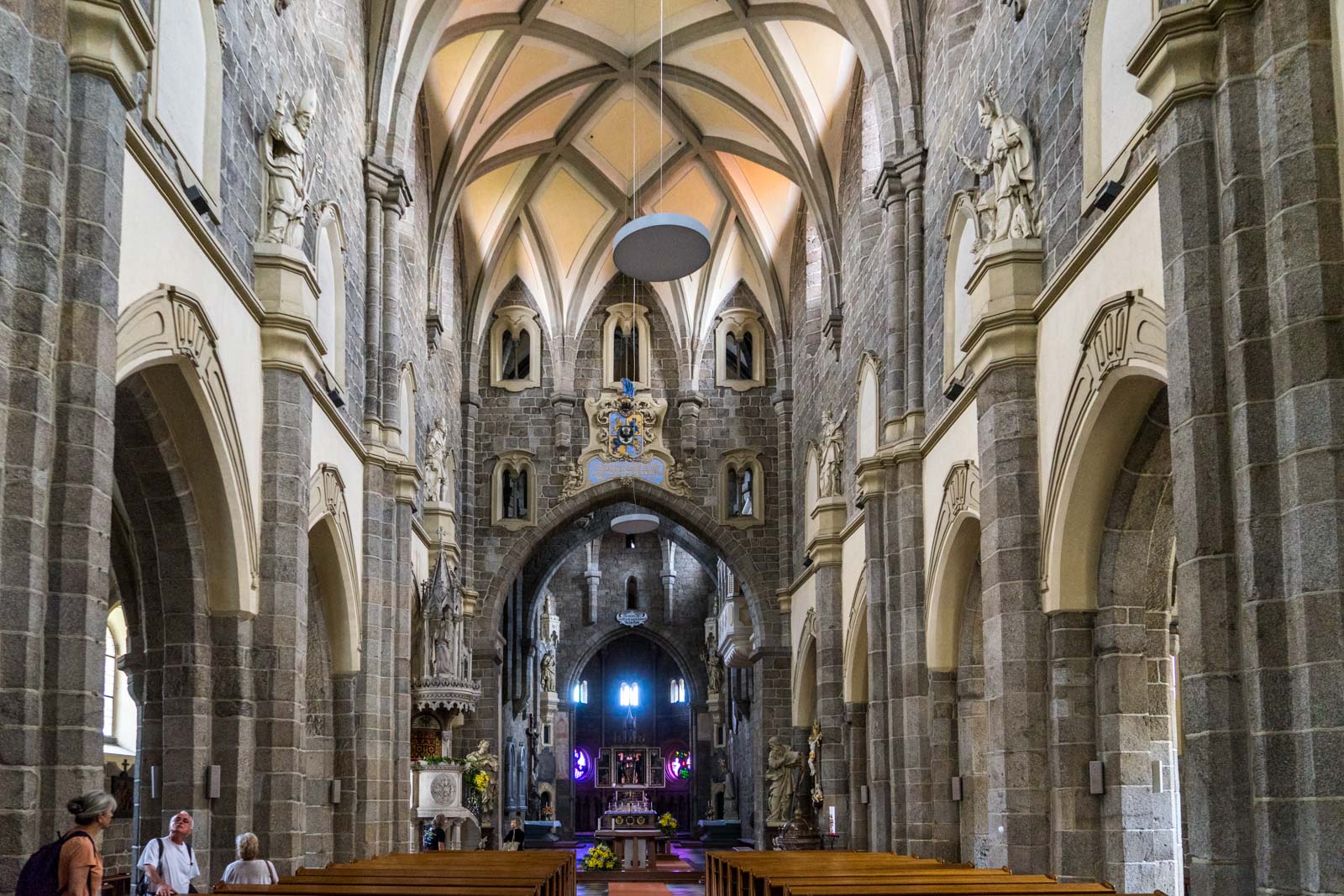 St Procopius Basilica is one of the first examples of Western architecture in Central Europe and for that reason alone would be a significant site. What makes it even more interesting is the neighbourhood that grew up right next to it.

In the middle of the 14th century – less than a hundred years after the basilica was completed – the first Jews arrived. They set up their new community in a part of Třebíč next to the river at the foot of the hill on which St Procopius Basilica.

Over the coming centuries, cruel social policies may have led to suffering for the Jews in this part of Europe – but it has left us with an authentic and homogenous cultural ghetto. 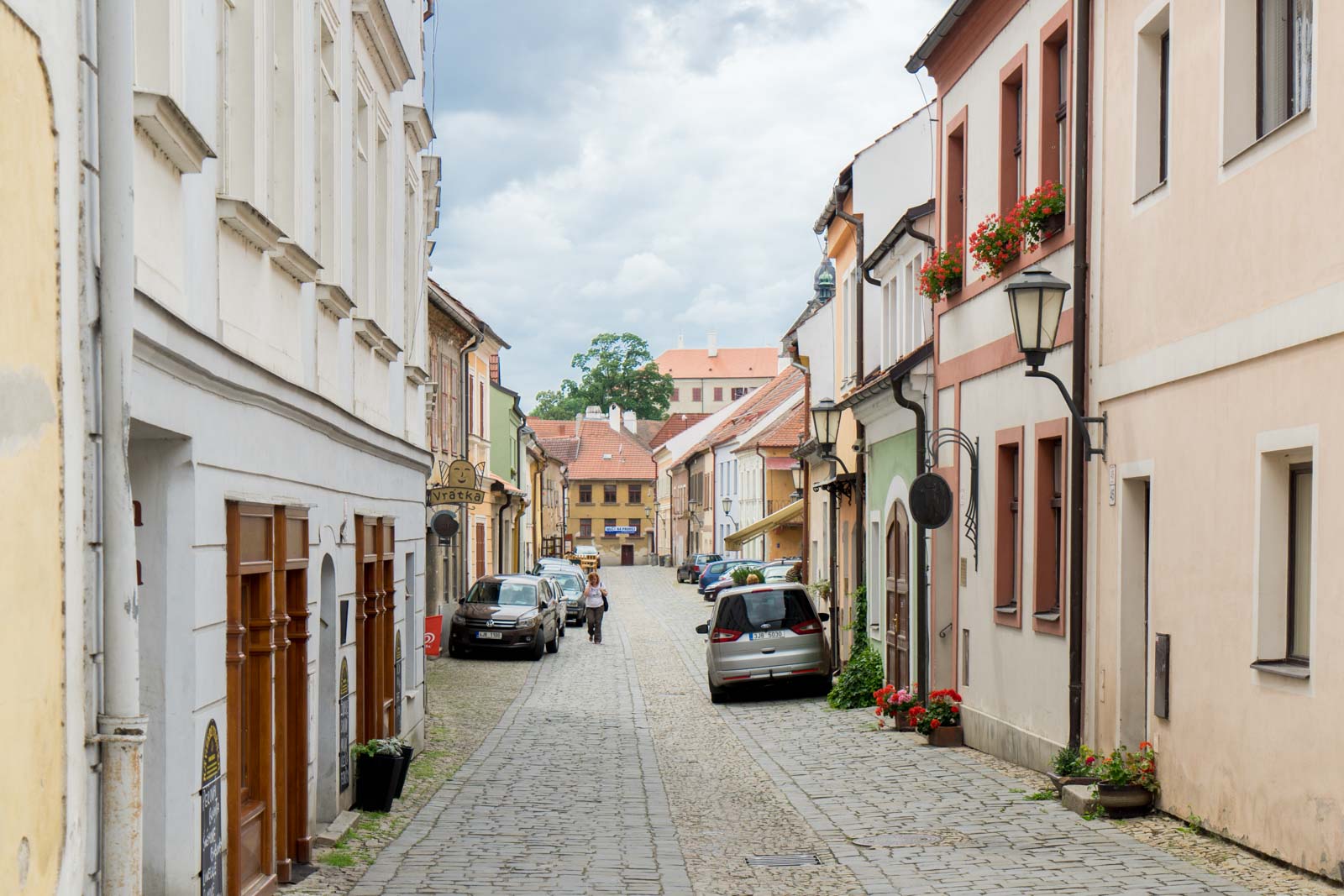 Jewish people were not allowed to live in other parts of the city so, as the population grew, they had to be creative with what they had. Houses were expanded – in whatever direction was possible – and the buildings ended up with complicated layouts.

To get into many homes, the residents had to actually walk through somebody else’s house. By the late 18th century, there were an average of 17 people living in each house! 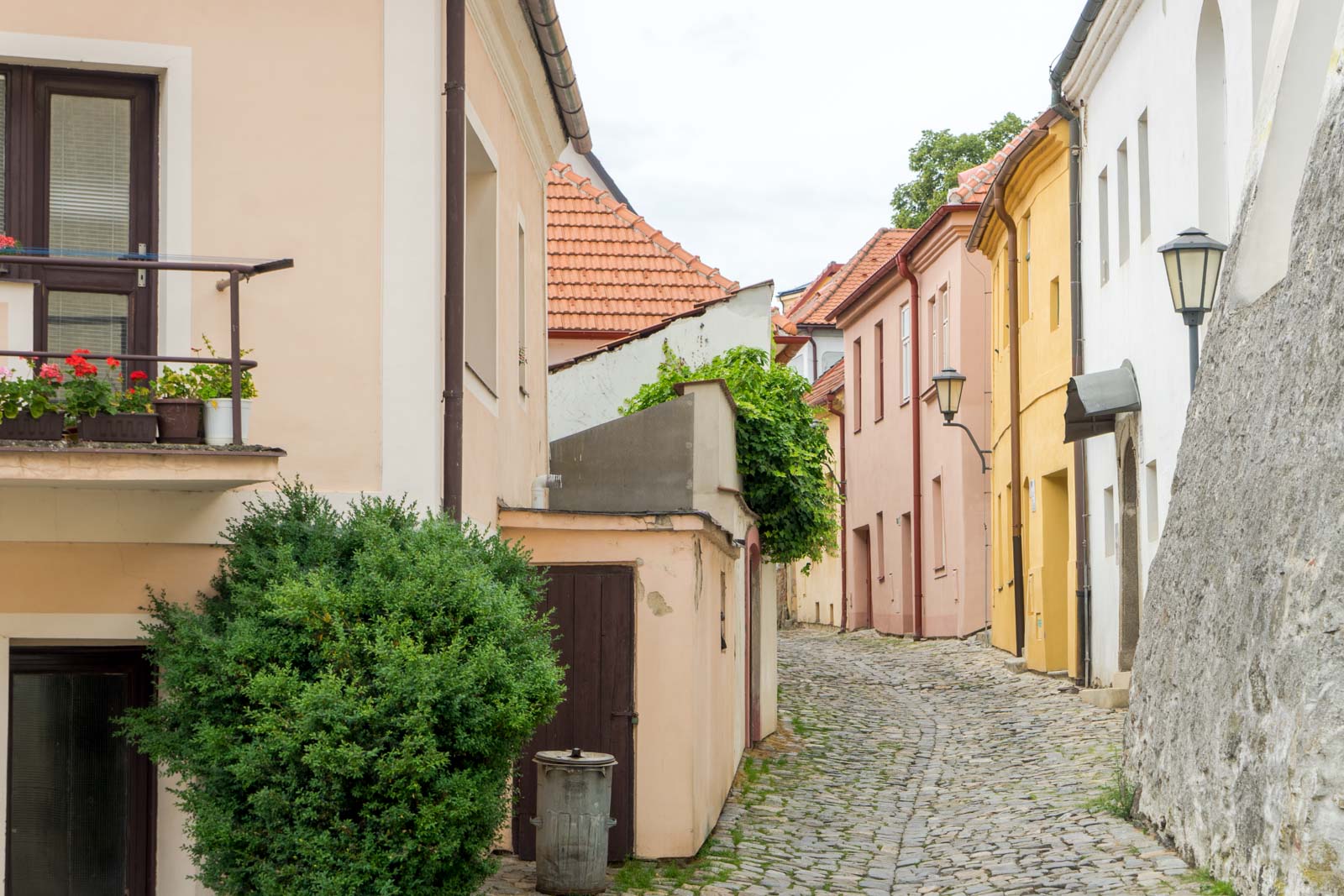 Despite all of this, though, there was very little racial tension in Třebíč.

Considering the overall situation in Europe, this was a relatively tolerant city. The policies to keep the homes of Jews and Christians separate were just that – policies. It didn’t necessarily reflect the mood of the general public here.

And so, when Jews were granted equal rights in the 1860s, many of them stayed in Třebíč bit move to larger and nicer houses on the other side of the river.

The richest families tended to move to big cities like Vienna. Only the poorest stayed where they were Today the Jewish Quarter has been preserved and restored – especially since it was listed as a World Heritage Site in 2003. Most houses have residents – but some have converted parts of their homes into shops, cafes or artist workshops.

There are also important historical sites like the Rear Synagogue, which was built in 1669.

Up the hill above the Jewish Quarter, a short walk but far enough to feel separate, is the Jewish Cemetery.

These days it is quiet and peaceful and has the atmosphere of somewhere that is cared for but with a light touch, so as not to disturb nature too much. 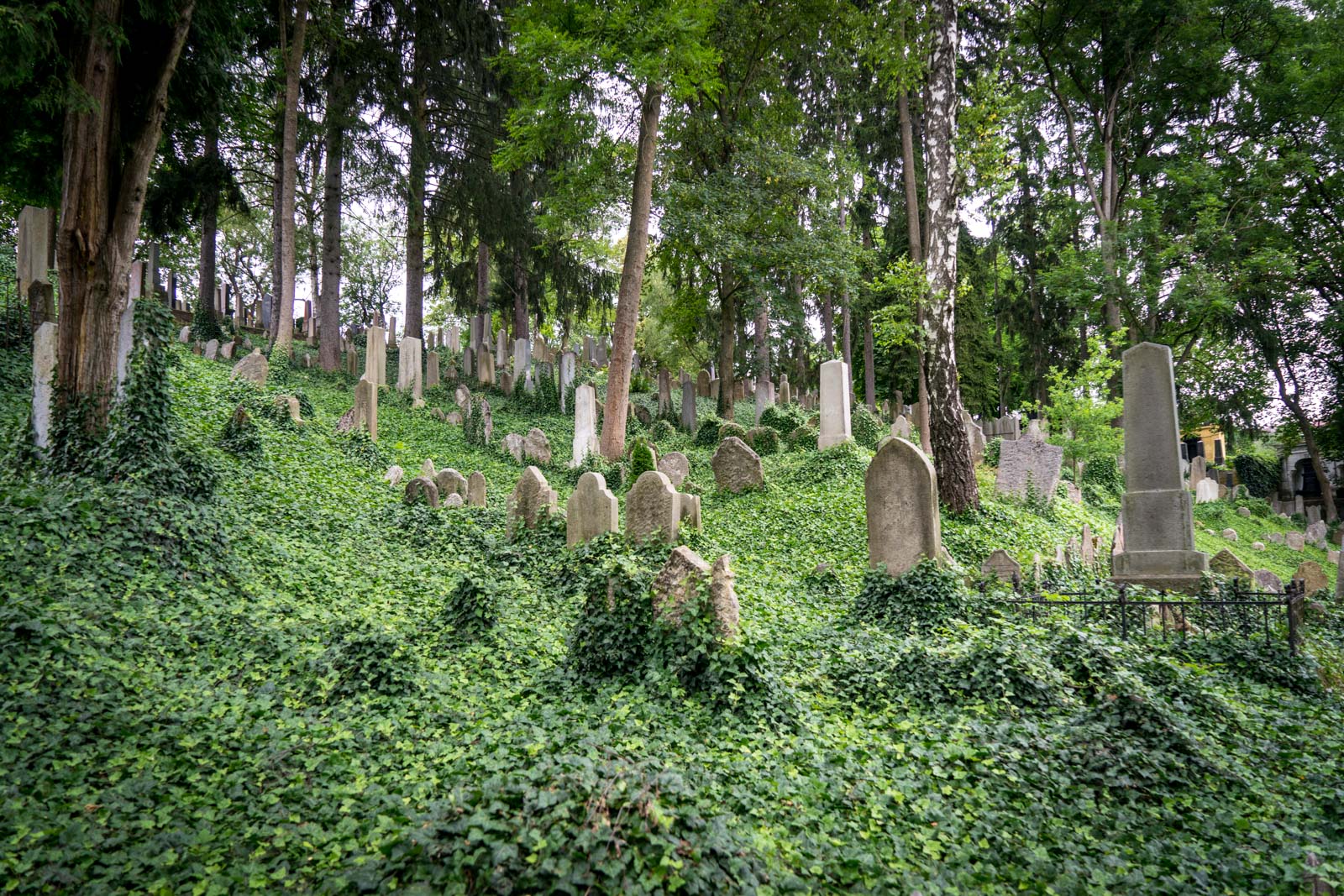 The floor is covered with a thick growth of leaves, surrounding the tombstones that rise up from within the green carpet. Trees grow amongst the graves and their branches create a canopy of shade above.

The cemetery is large and spreads out along a slope with paths leading through it all. I find it calming to walk around and I take my time.

Most of the tombstones – particularly the older ones – have writing in Hebrew so I can’t read what they say. I guess the dates on them are old, though. Almost as old as the houses I have just seen. 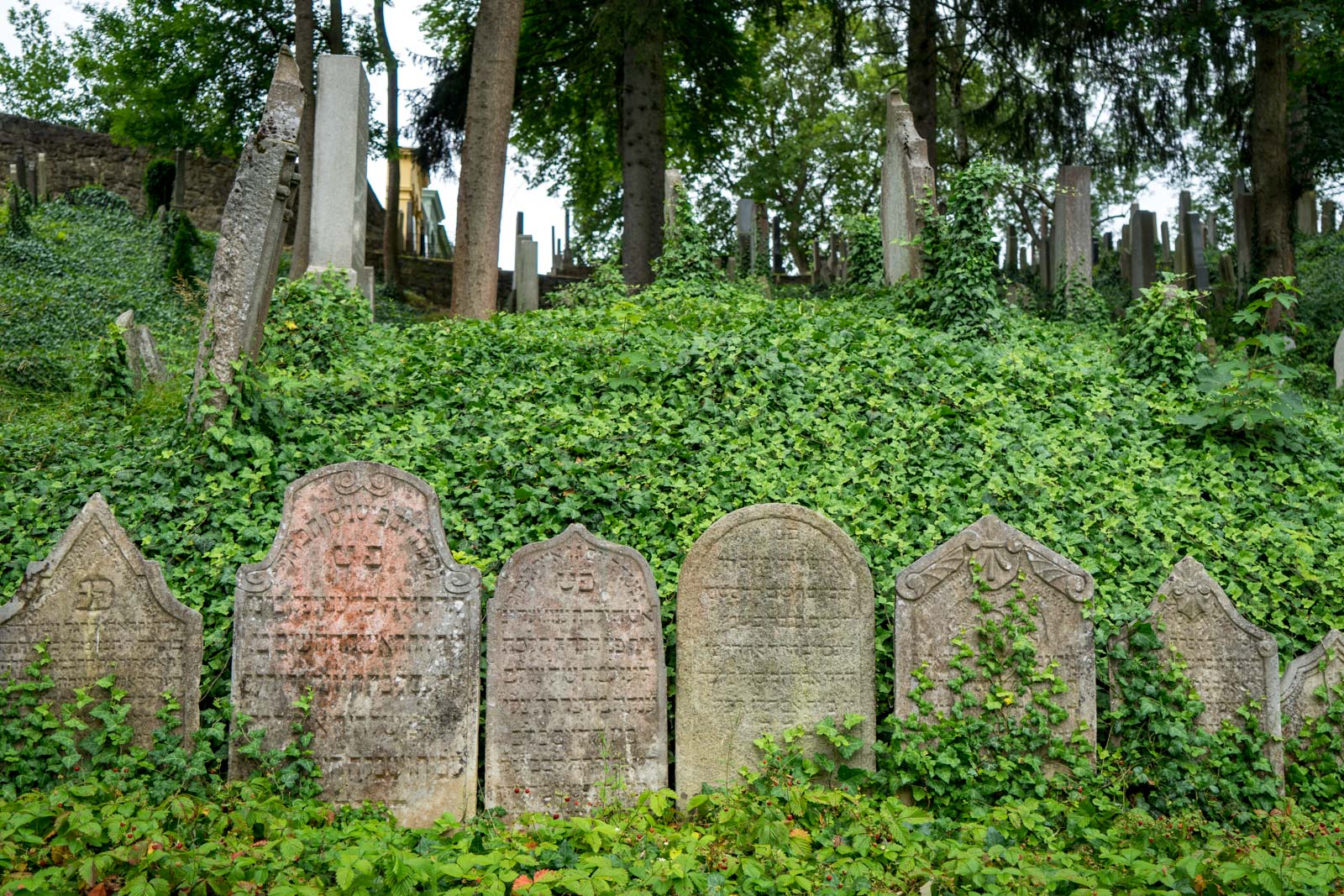 And that’s ultimately what makes Třebíč so interesting. To have different parts of a city for different religions might seem odd for us today, but the tolerance between the Jewish and Christian residents is also something you might not expect in such an environment.

The symbols of this era have been well-protected and are all so close to each other.

Třebíč is not the most exciting city in the Czech Republic and I can promise you that you won’t have missed out on much if you skip it on a trip here.

But, at the same time, you won’t be disappointed if you stop in and have a look around. It’s just another interesting layer in the story of Central Europe’s history.

St Procopius Basilica is on the northwestern side of the city, on the opposite side of the river to most of the development. The official address is Zámek 1, 674 01, Třebíč,. You can see it on a map here.
It's pretty annoying but you can only go into St Procopius Basilica as part of a guided tour and they are only run at certain times of the day.
The tours are run from Monday - Thursday: 0900, 1000, 1100, 1300, 1400, 1500, 1600.
Friday: 0900, 1000, 1100, 1300, 1400.
Saturday - Sunday: 1300, 1400, 1500 and 1600 (and from June - September, 1700 too).
Yes, there are some tours from Prague that will show you around Třebíč and some other highlights of the region.
To see the city and another World Heritage Site of Telč, then I would suggest this tour from Prague.
If you would like to see four World Heritage Sites over two days, then you can do this private tour.
If you’re looking for a budget option, then Bakin Bar has dorm beds available.
For something basic but comfortable and cheap, have a look at Hotel Alfa.
For a nice and modern hotel and a good rate, I would suggest trying Hotel Atom.
And if you're looking for somewhere with heritage value, then Hotel Joseph 1699 is the best in town.