Vietnam's capital city has lots of interesting things to see. To help you plan your trip to Hanoi, here are my top suggestions.

Things to see in Hanoi, Vietnam

Part of the charm of Hanoi is wandering the streets and finding all the hidden gems. I could spend days just looking at the shops, stopping at food stalls, and letting the chaos go on around me.

But, seeing as this is the capital of Vietnam, there are plenty of important things to see in Hanoi.

What’s great is that most of them are walkable from the majority of central hotels, so you can combine an exploration of the streets with a walk to a landmark. 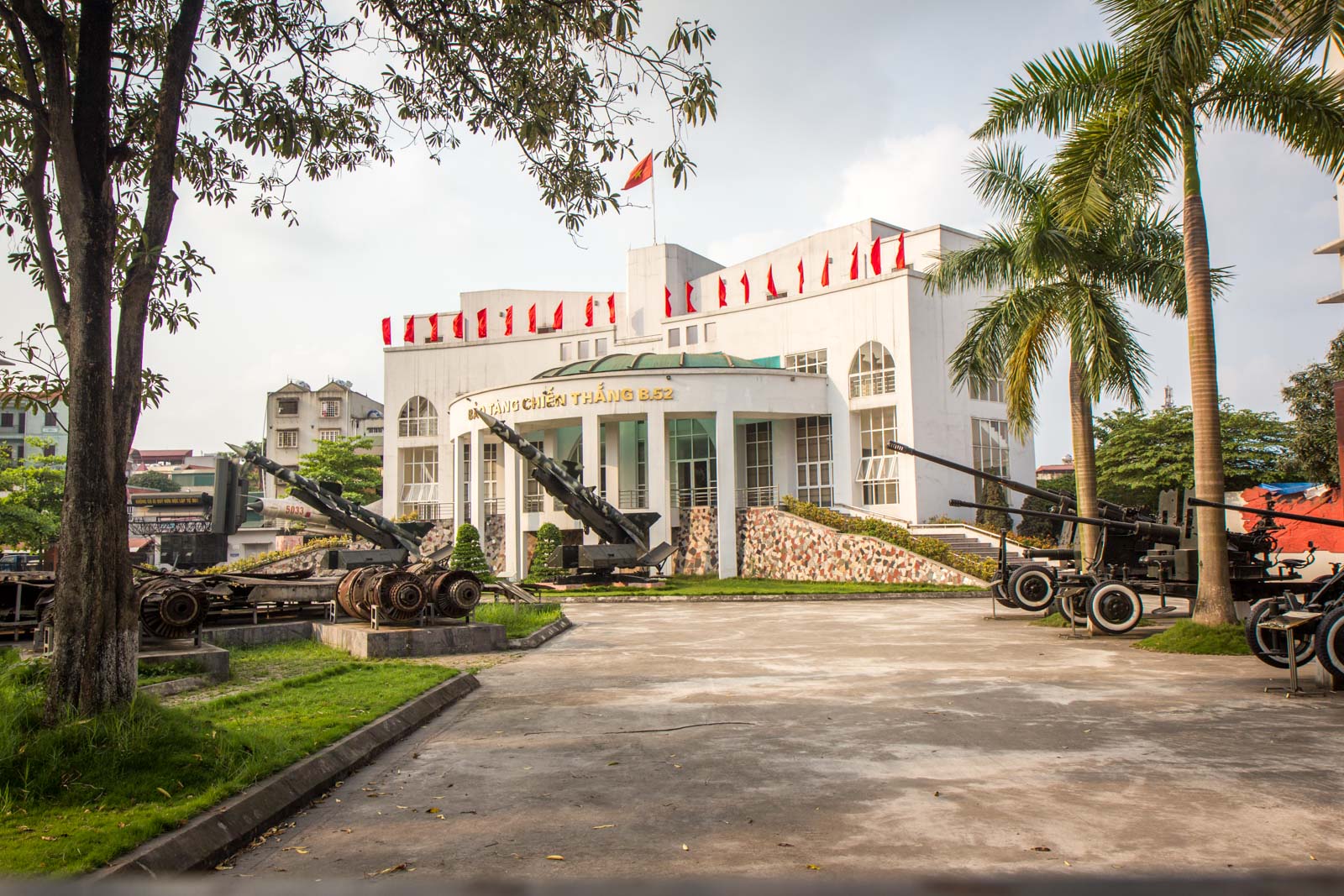 To help you plan a visit to Hanoi, I’ve put together a list of some of the things you can see in the city. This list is not exhaustive and not every one of these places is necessarily worth seeing – particularly if you are short of time.

I went to them all and I’ve included my opinion and some suggestions on the best way to visit.

I hope you find this helpful. If you’re anything like me, you’ll have a great time in Hanoi and wish you could stay even longer – if only for the food and great coffee!

One of the most important buildings in Hanoi is the mausoleum where the embalmed body of Ho Chi Minh is displayed. He was the prime minister and president of the Democratic Republic of Vietnam (North Vietnam) and played a key role in the early part of the Vietnam War.

Visitors are allowed to go into the mausoleum in the morning between 9 and 12 but – be warned – there is often a long wait.

There are also strict rules in place, including a dress code. You’ll also have to leave your camera at the security office before you’re allowed to go in.

It’s an eerie but quick experience once it’s your turn to enter. You have to continue walking the whole way through as you go around the body and can’t stop for a proper look. Guards will hurry you along if it looks like you’re about to pause. 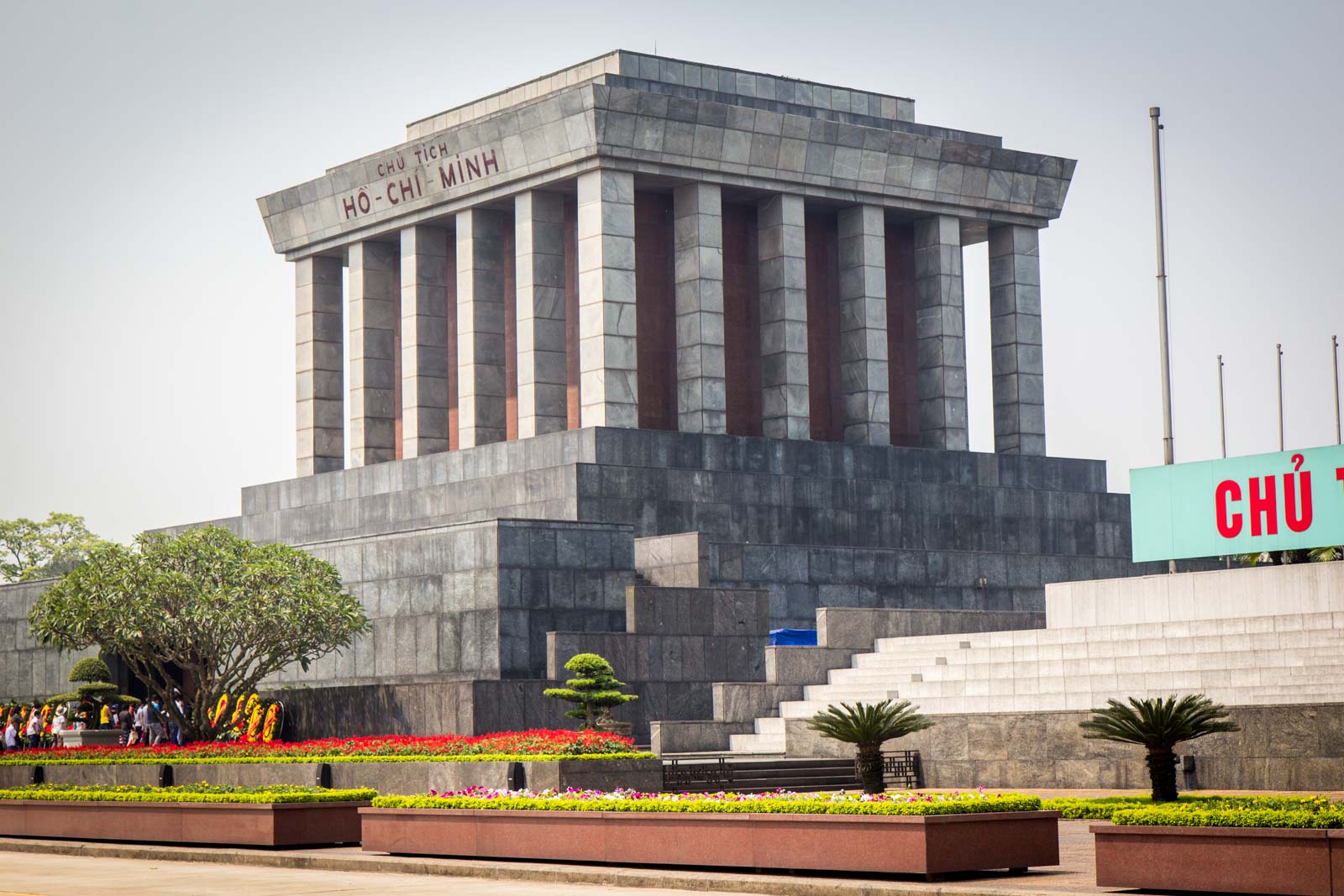 Ho Chi Minh’s Vestige is part of the mausoleum complex but you’ll need to pay to get in (the mausoleum itself is free).

You’ll be able to see the outside of the Presidential Palace but can’t go inside. What you can see are the offices in the smaller houses nearby where Ho Chi Minh used to work. There are also some of his belongings including some cars that he used.

The small lake and the gardens are pretty and you’ll be able to go inside a stilt house, which is where Ho Chi Minh apparently lived for most of his tenure, shunning the more opulent palace.

Although the vestige may not be worth a visit on its own, it makes sense to do it if you go to the mausoleum. 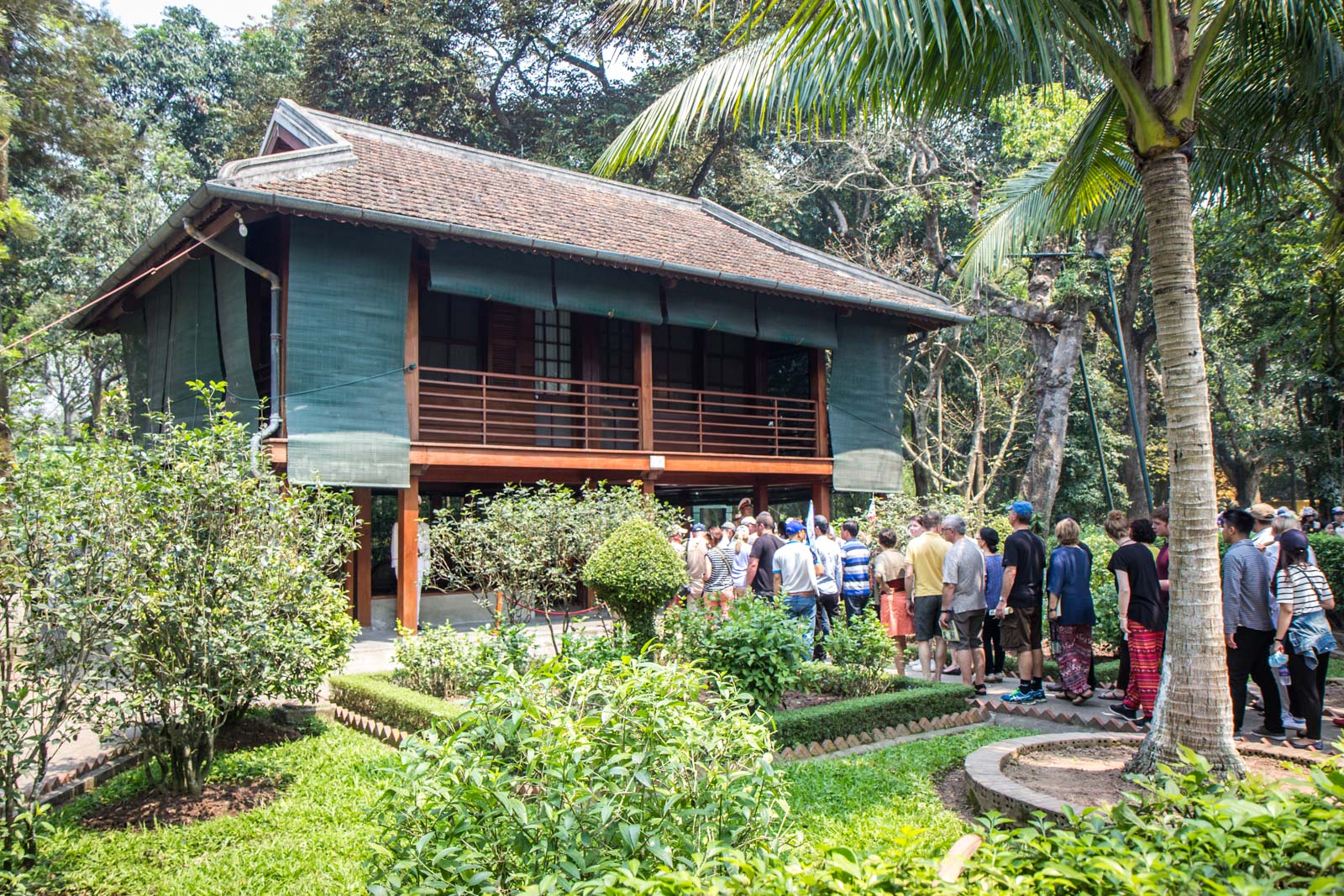 Near the Ho Chi Minh Mausoleum is the Vietnam Military History Museum, a collection of old military equipment used by the Vietnamese as well as items captured from the French and Americans. It’s easy to spot because of the tanks and planes in the outside areas around the main buildings.

These large bits of hardware are the highlight of the museum and you can go right up to them and look in. The exhibitions inside the museum are quite basic and are probably of more interest to a military history buff than the average tourist.

It has information and displays from older conflicts as well as the more recent ones that most people are familiar with.

One of the other things to see in Hanoi is the Imperial Citadel of Thang Long. This ancient complex is the city’s only World Heritage Site but it is on the list more for its historical significance than for what you can see today.

For centuries there has been a centre if political power here but most of the old buildings have been destroyed or drastically remodelled.

The old gates and the steps to the old fortress are still there but most other buildings are modern.

There is a large archaeological dig happening that will hopefully find some interesting artefacts. Perhaps the highlight are the war rooms and bunkers at the back of the complex that were used during the Vietnam War. 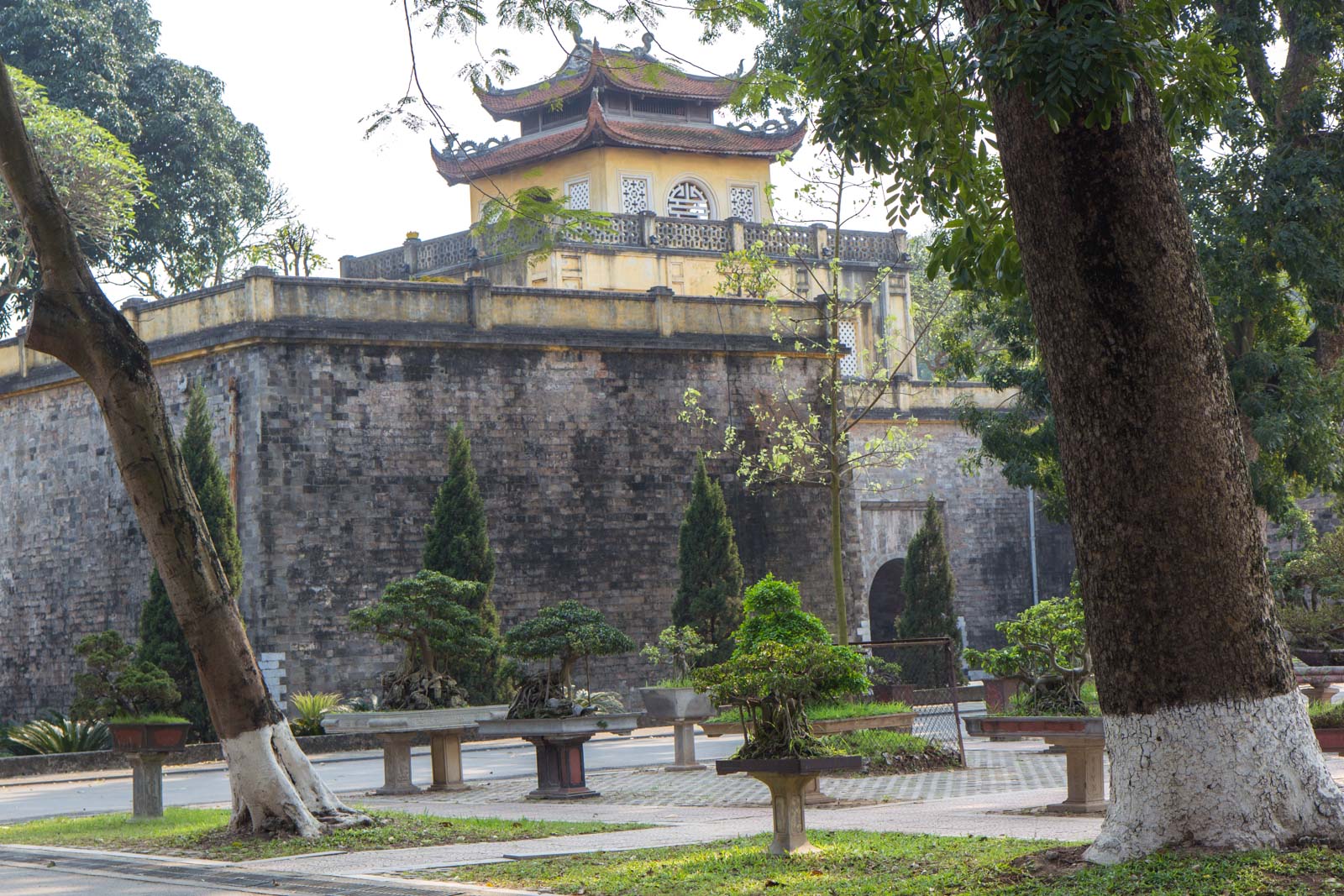 >> Read my story here about the Thang Long Citadel
The citadel takes up an entire enormous. Officially the address is 9 Hoang Dieu, Dien Bien.
The citadel is open Tuesday - Sunday from 0800 - 1700. It is closed on Mondays.
A ticket to the citadel costs 30,000 VND (US$1.30). Admission is free for children under 15 years old.
You can find more information at the citadel's official website.

This beautiful temple in the Old Town of Hanoi was built in 1070 and is one of the most important religious sites in the city. It is laid out in five courtyards which you can walk through as you make your way from one end to the other.

The first part of the complex feels like a large shady garden while, at the other end, a two storey structure hold some of the most important altars and places of worship.

The Temple of Literature is seen as an important site for education and during the graduation season there will be hundreds of students posing for photos and waiting for blessings. 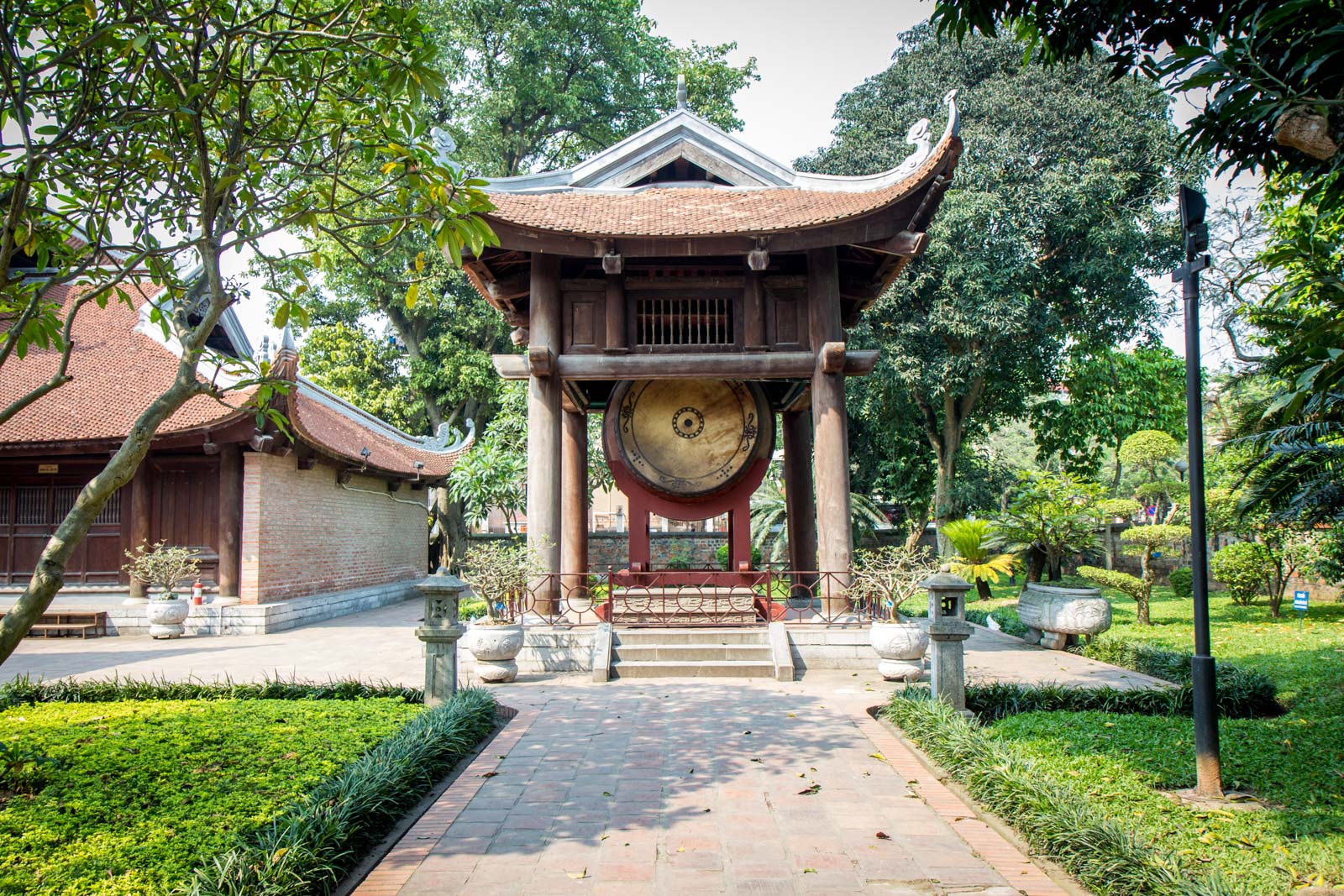 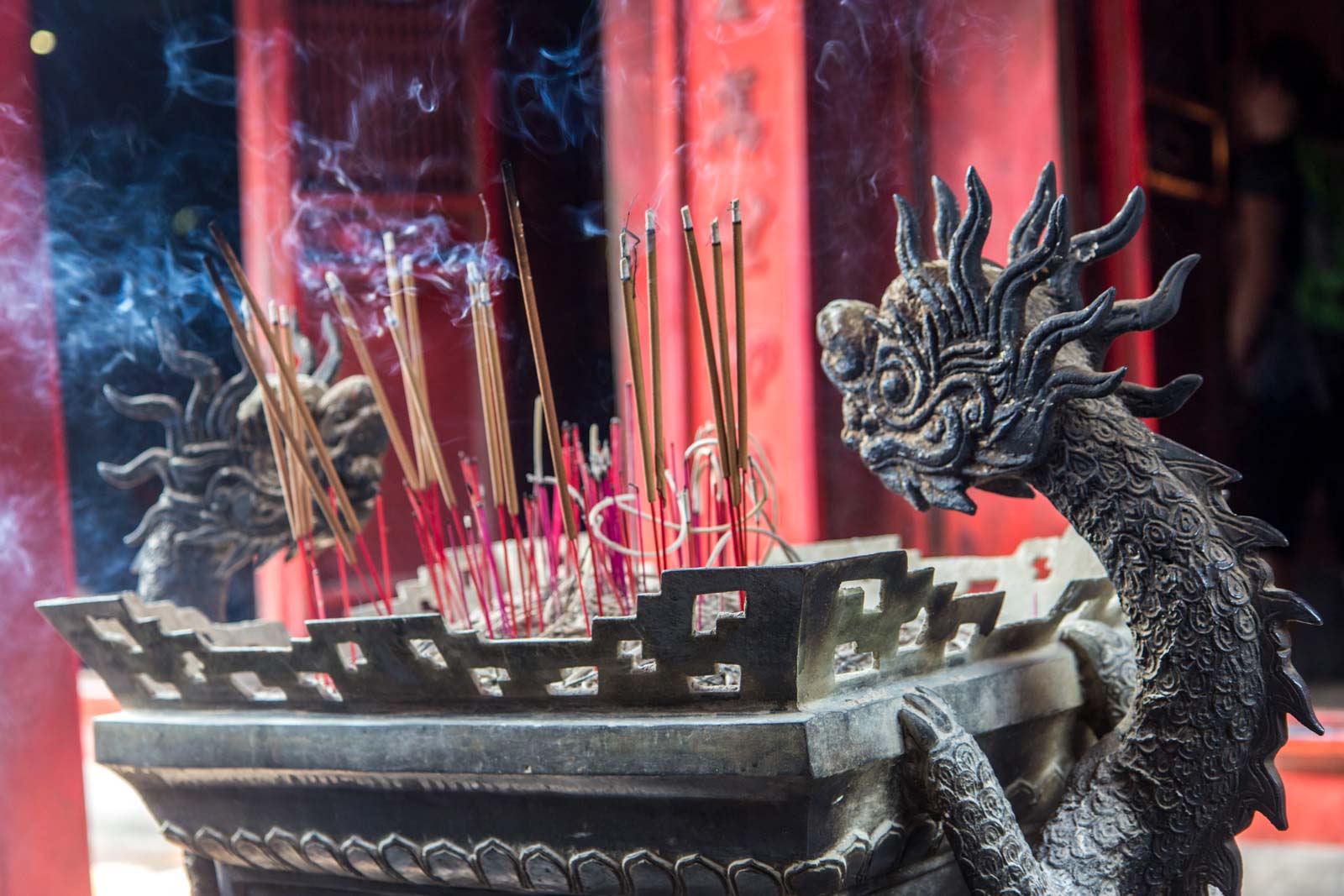 The Hoa Lo Prison was used by two different groups during its history. Firstly, by the French colonists who held Vietnamese people here as political prisoners, and then by the Vietnamese who held American prisoners of war.

You’ll be able to see some of the holding cells and a few reconstructions of what life was like in Hoa Lo Prison over the years. Look out for the photos and flight suit of US presidential hopeful John McCain who was held captive here.

A warning: the museum can get busy because this is one of the most popular things to see in Hanoi. 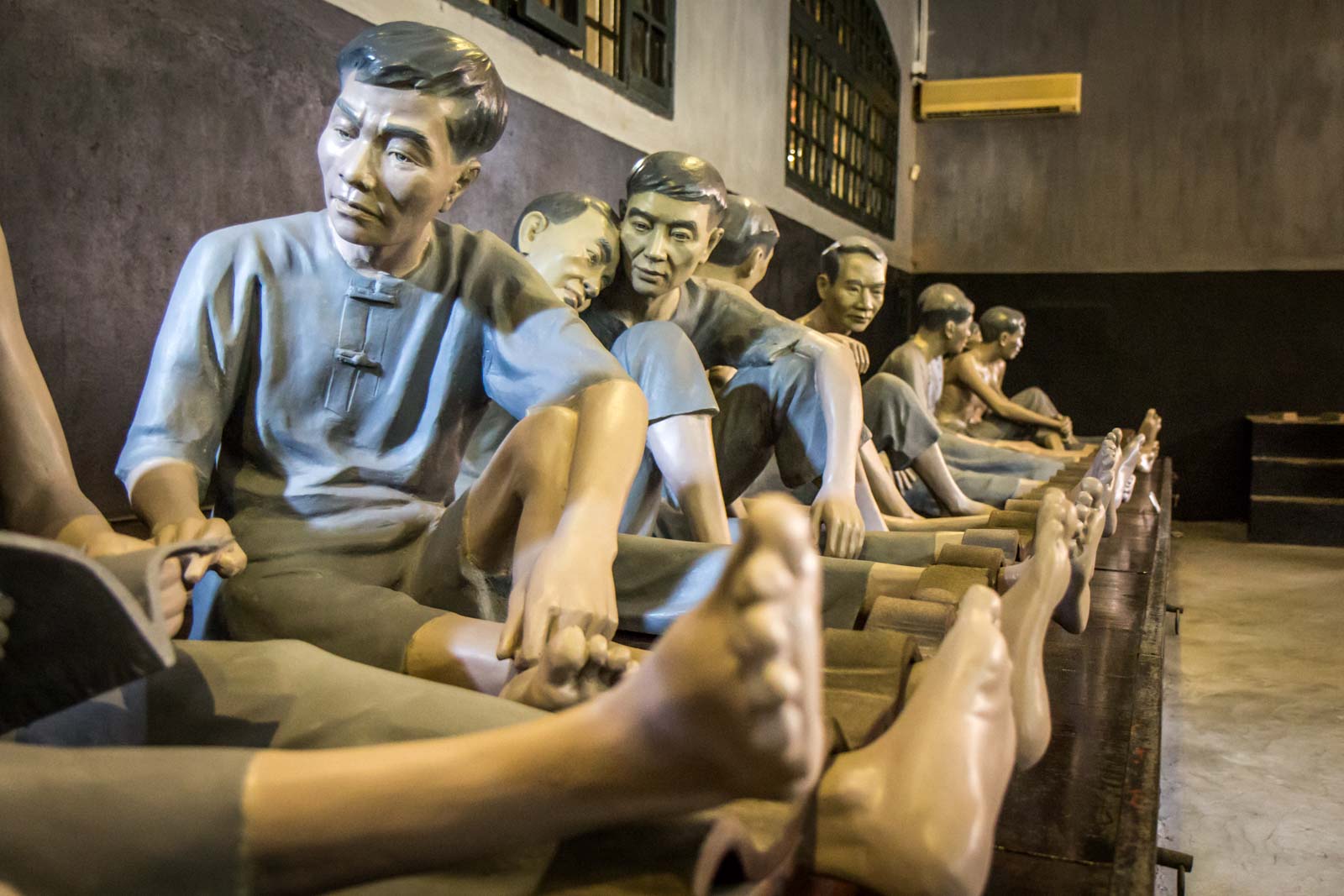 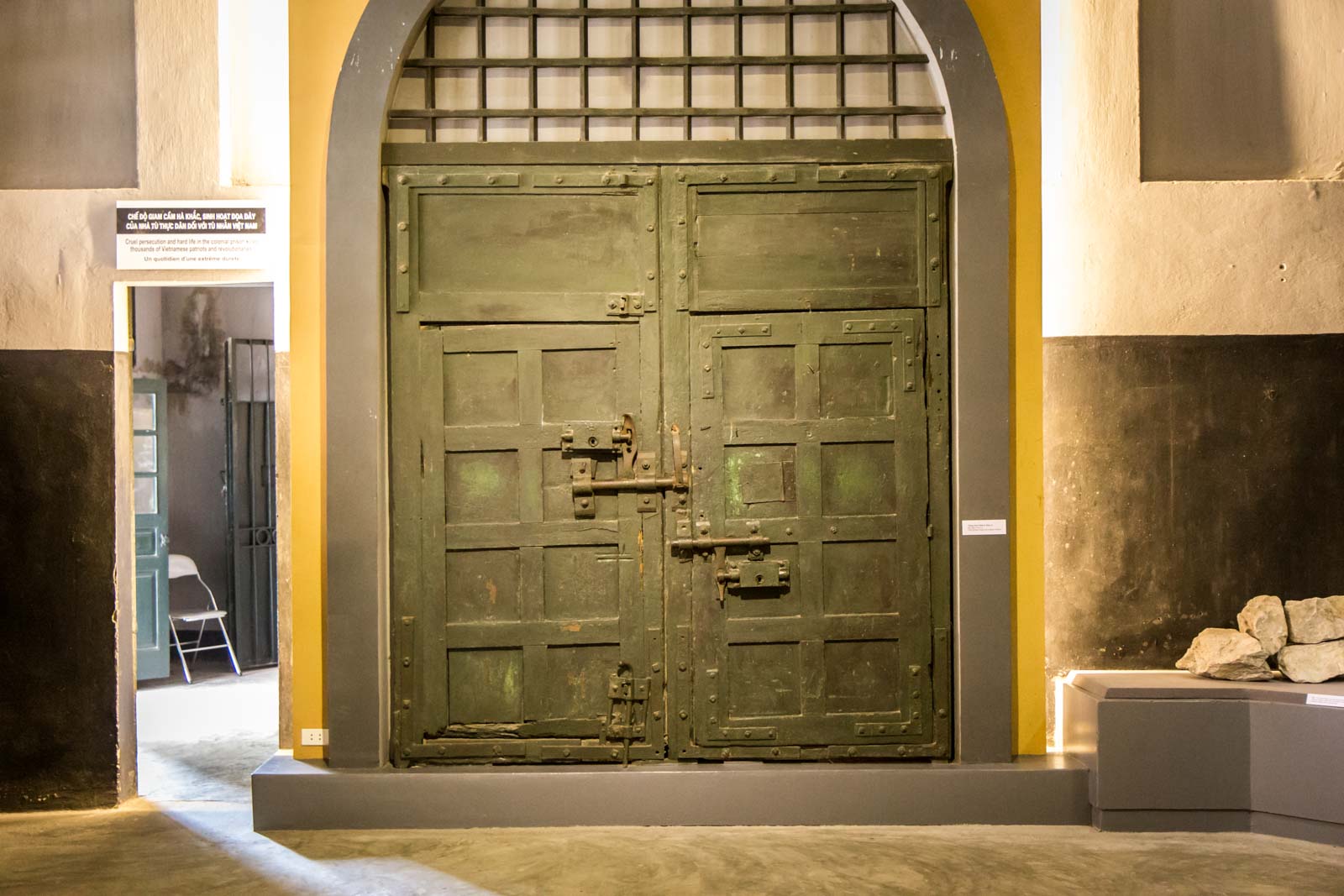 This art gallery is often overlooked by tourists but it is actually very good with an excellent collection of work from Vietnamese artists. It has displays of historical art periods as well as a decent selection of modern art.

The Vietnam Fine Arts Museum is considered to be the most important art gallery in the country and it would be easy to spend a couple of hours looking at all of the pieces. It could do with a bit more information on the best way to explore the building because the entrances to some of the rooms are not that clear. 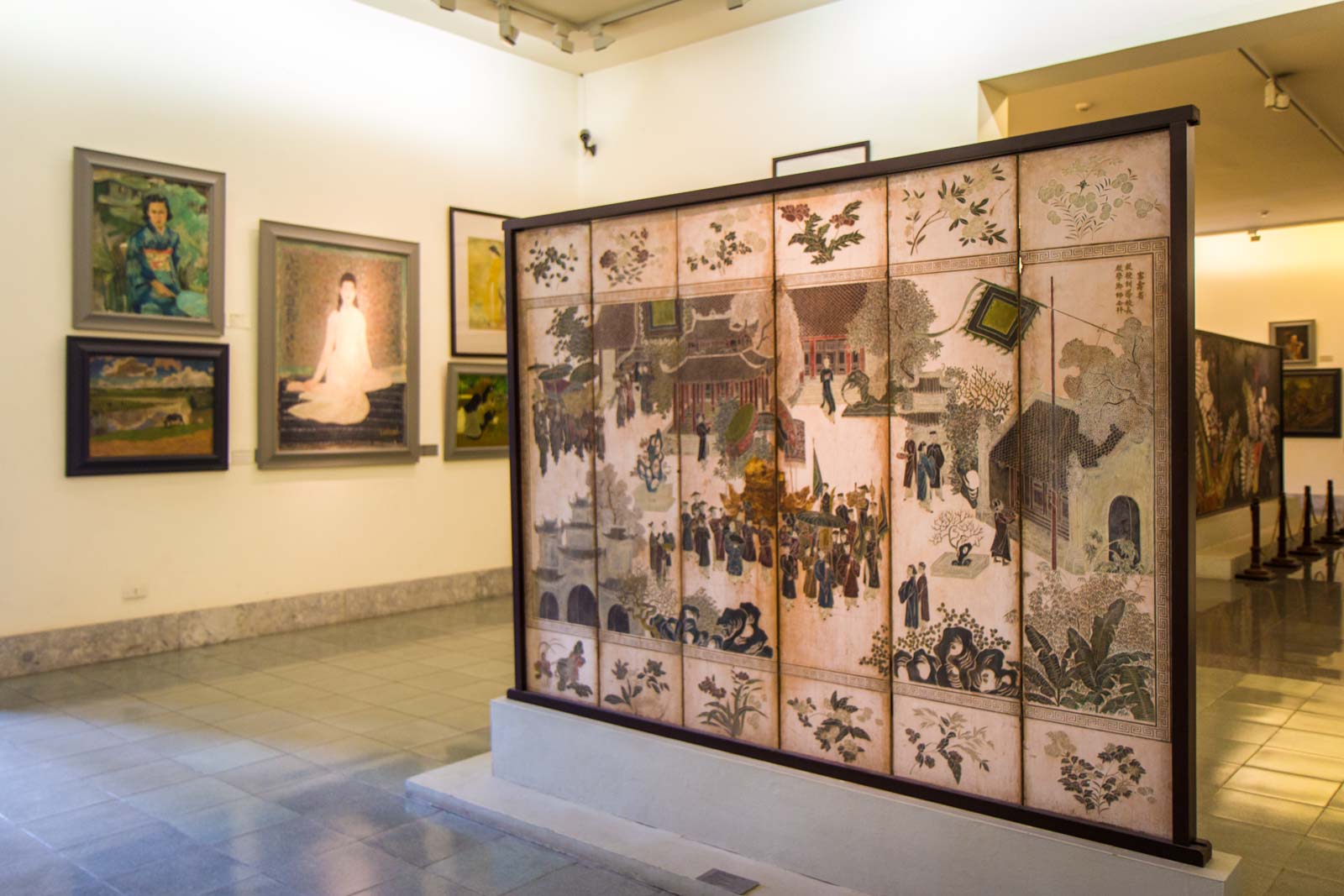 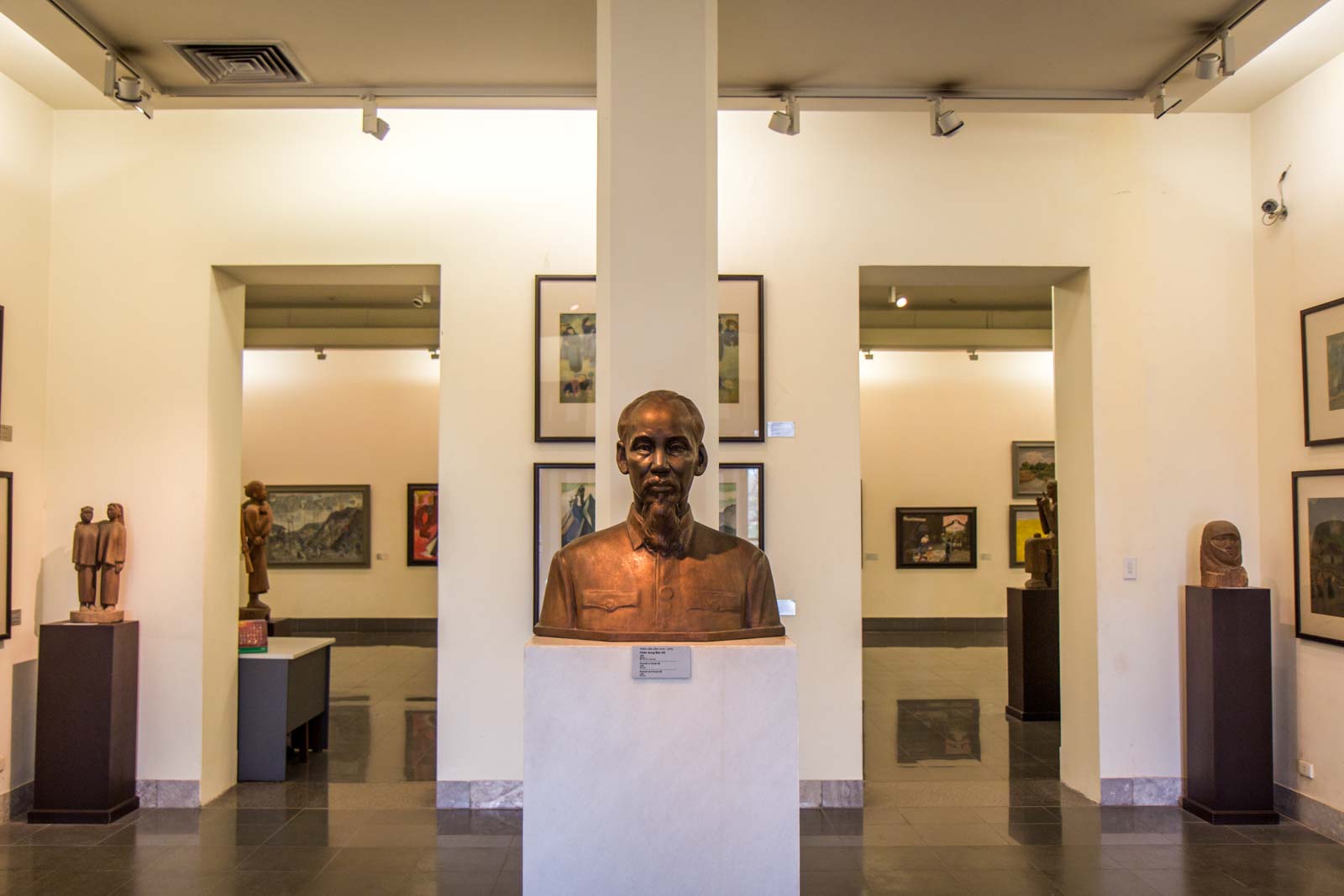 The Museum of Ethnology is a little way out of the main parts of Hanoi and you’ll probably need to organise a taxi or some other transportation to get there.

Although it has a good reputation and is well organised, all the information can be a little overwhelming. It is essentially a museum about the different ethnic groups in Vietnam but it can be hard to take it all in.

It is much better to visit if you know which areas of the country you are planning to visit (or have visited), so it makes a bit more sense. The main building has lots of displays and information while the outside areas has reconstructions of traditional buildings used by the various ethnic groups. 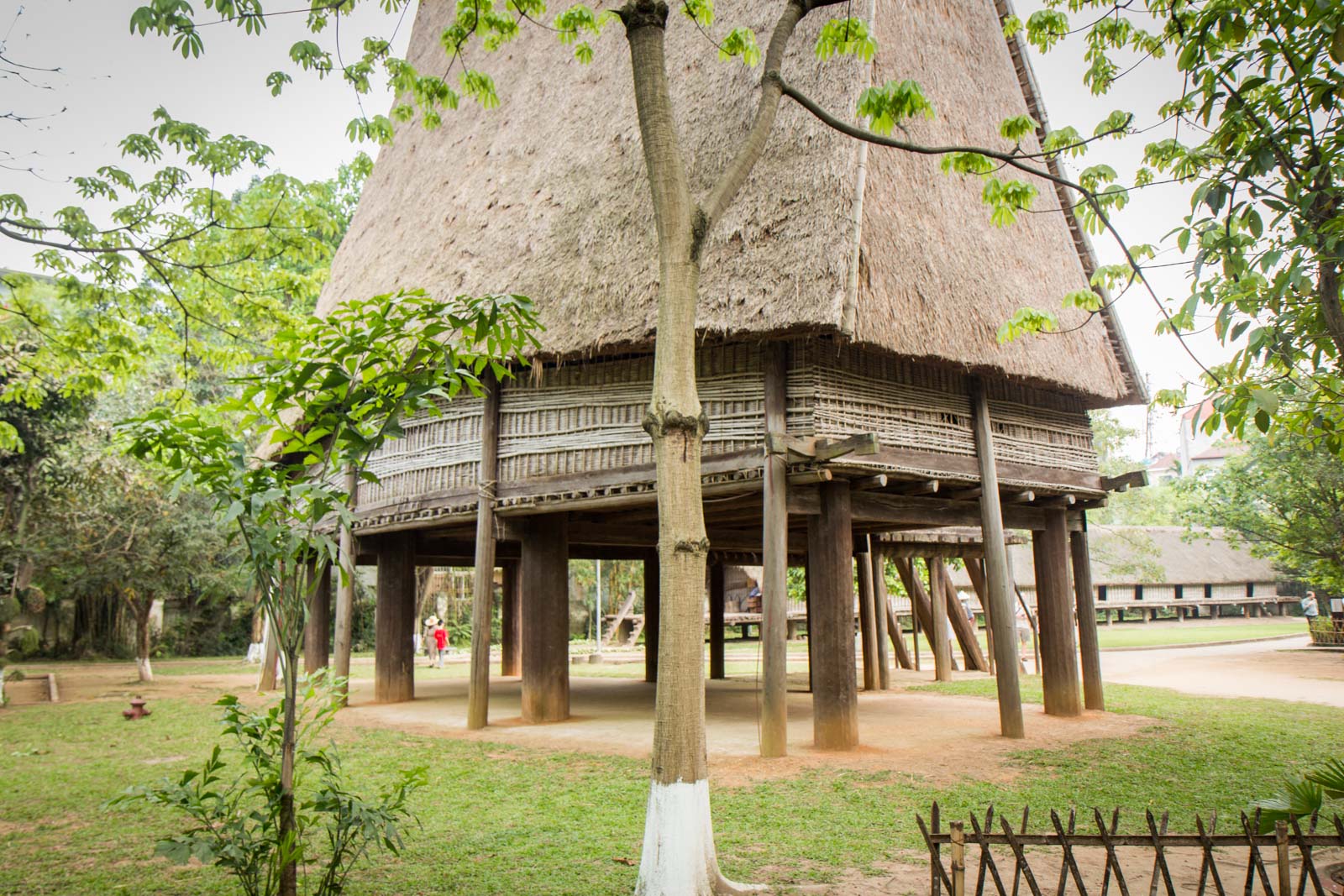 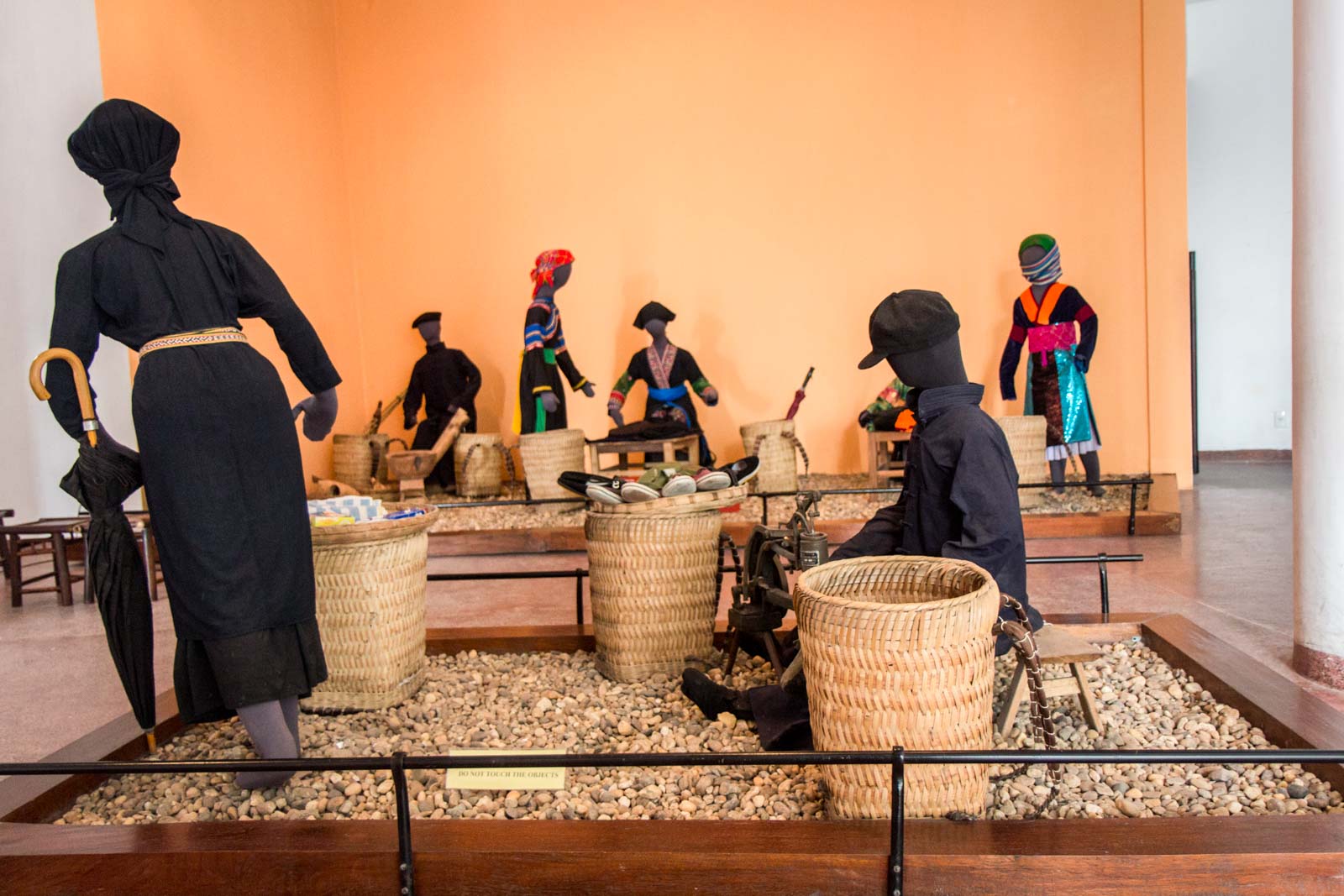 The museum is on Nguyễn Văn Huyên Road, near the intersection with Nguyễn Khánh Toàn Road.
The museum is open from Tuesday to Sunday from 0830 - 1730. It is closed on Mondays. It is also closed on the Chinese New Year's Day
A ticket to the museum costs 40,000 VND (US$1.75). There is no concession price but admission is free for children under 6 years old.
You can find more information at the museum's official website.

And, finally, you won’t find this in the guidebooks but I found a street in Hanoi that I just absolutely love. It’s one of the prettiest streets around because of all the vendors selling flowers, plants, animals and colourful toys.

It’s a great place to take a stroll with your camera and see all the activity going on. Not exactly a ‘tourist attraction’ but a nice little slice of local life.

You can find it at the western end of Hoang Hoa Tham. 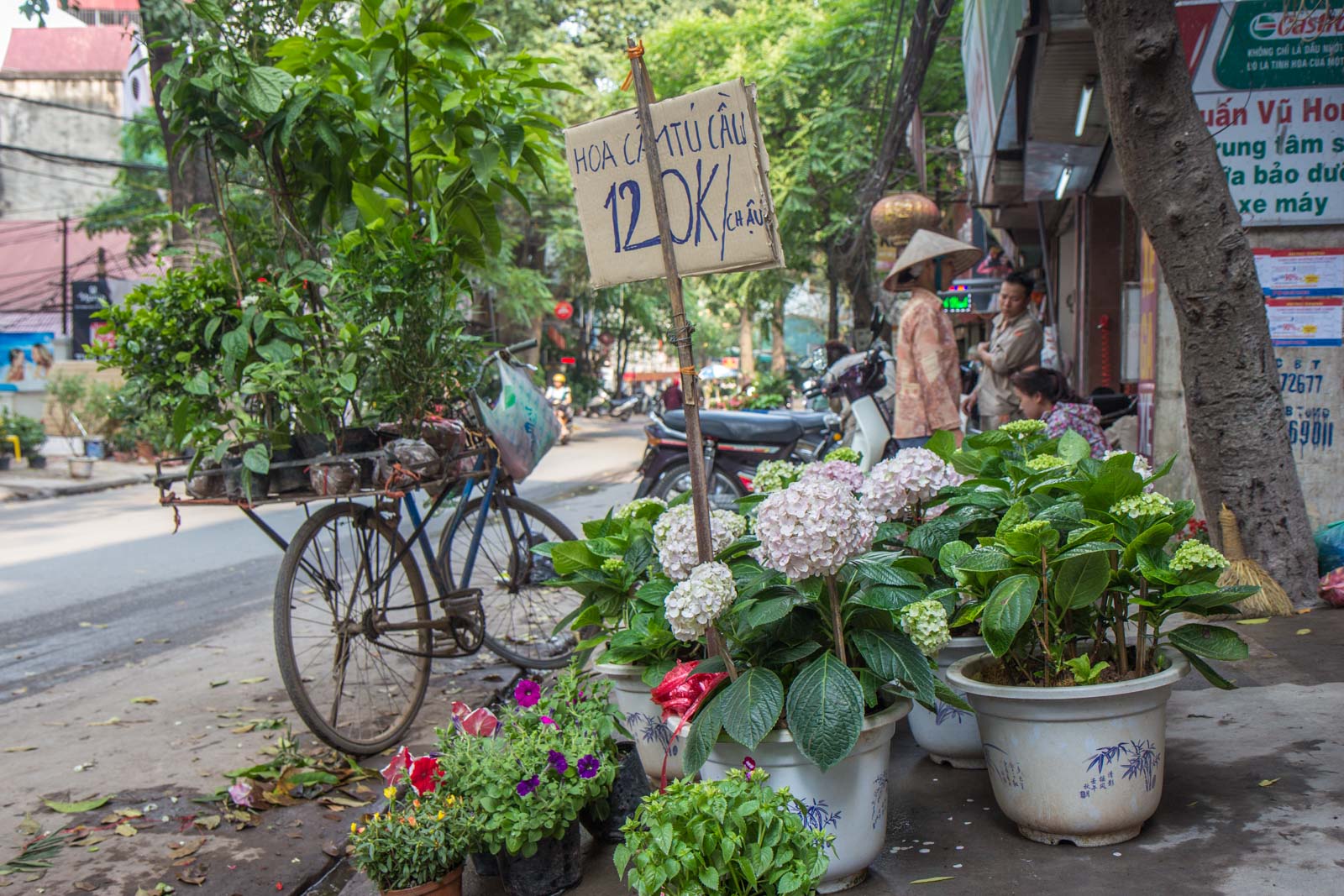 >> Read my story about the prettiest street in Hanoi

Hopefully now you have an idea of some of the best things to see in Hanoi. You can use these suggestions as a bit of a framework.

But, as I said earlier, make sure you leave yourself time to just explore the streets and experience all the vibrancy that this city offers.

Hanoi is well connected to South East Asia by plane and there are lots of cheap flights on good airlines. From other parts of Vietnam, the easiest way will be by train. If that's not possible, there are also lots of bus options into Hanoi. My tip is to use this travel booking site, which will give you all the options and prices and you can make a reservation to guarantee a seat.
Yes! Even though I've listed a lot of suggestions here for things to see in Hanoi, you may prefer to have someone show you around. Or you might like to see the city in a different way. Here are some of my suggestions:

To see the main sights and get off the beaten track a little, I would recommend this day tour.

There is heaps of amazing food in Hanoi so you could also do this food tour. I guarantee you’ll try some things you wouldn’t have otherwise!

Or for something a bit different, there’s a great photography tour along the local rail tracks.

Or you could be a bit more adventurous with this bike tour of nearby countryside and villages.

There are lots of budget hostels in Hanoi but I would recommend Luxury Backpackers which has great beds.
There are also lots of quite similar cheap hotels. A comfortable option is Golden Moon Hotel with breakfast.
For a really trendy hotel, you should try The Chi Boutique Hotel.
And if you want to really splurge, I think the nicest luxury hotel in the city is the Sofitel Legend Metropole.

WANT TO KNOW MORE ABOUT VIETNAM?

To help you plan your trip to Vietnam:

You may also want to consider taking a tour through Vietnam, rather than organising everything on your own. It will be much easier and it’s also a nice way to have company if you are travelling solo.

I am a ‘Wanderer’ with G Adventures and they have great tours in Vietnam.