It’s so easy, when you’re thinking about a trip in Europe, to focus on the cities.

In many ways, it makes sense – it’s where you might fly into, or where you can get with a direct train. Accommodation might seem more convenient and you know there will be lots of things to do, restaurants to eat at, places to drink.

But cities also have their disadvantages. They’re often more crowded – both with residents and with tourists. There’s the traffic, the pollution, the general sense of stress that you’ll always find in an urban centre.

One of the reasons you travel is to relax and, when it comes to Europe, some of the most relaxing destinations are outside of the cities. Surrounded by nature, time slows down a bit. Your perspective changes, priorities shift. For a brief moment, life is a pleasant adventure that you are in control of. 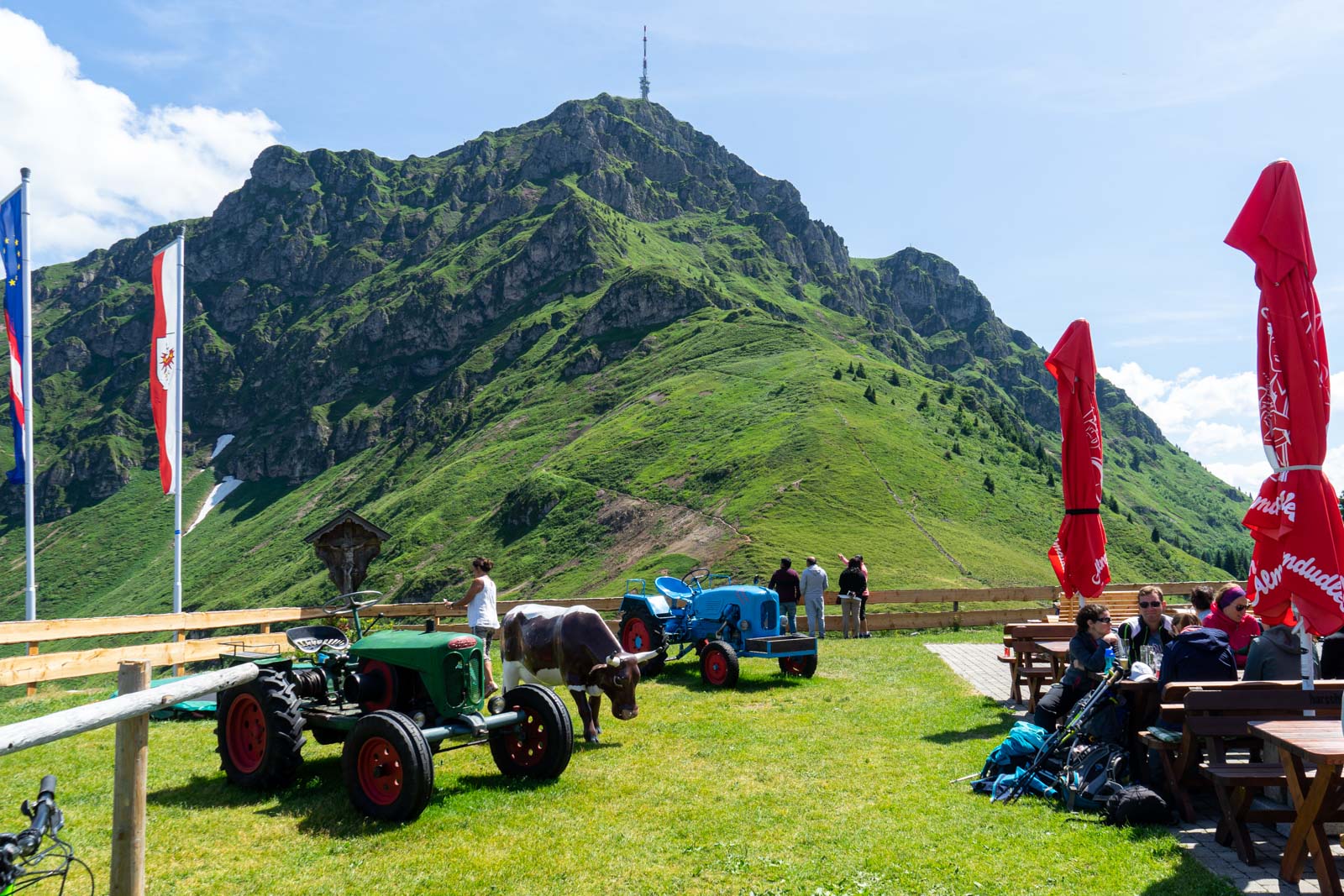 It’s as I’m exploring the St Johann region in Tirol that these thoughts come into focus. Tirol is perhaps best known as one of Austria’s premier ski regions, but it’s the green of summer that has brought me here this time.

Once the snow has melted and the white has been replaced by more vibrant hues, the mountains around St Johann become a different type of playground.

Chairlifts and cable cars take you up and down, or you can hike or bike. Outdoor beer gardens are sun-drenched, lakes unfrozen. In the forests, trails that would normally be closed in winter are open again.

All of it is accessible and flexible. This is where I find my freedom and adventure. Where I see how a region like St Johann offers so much more to the average visitor.

I start my time in St Johann riding up the Harschbichlbahn, the 3.5-kilometre-long cable car system that takes me from the St Johann township up the nearby Kitzbuhel Horn mountain.

It’s more than just mere transportation. I stare out the windows at the views in every direction, snow-capped mountains to the north, a river flowing out to the east, pockets of forest dotted across the landscape. 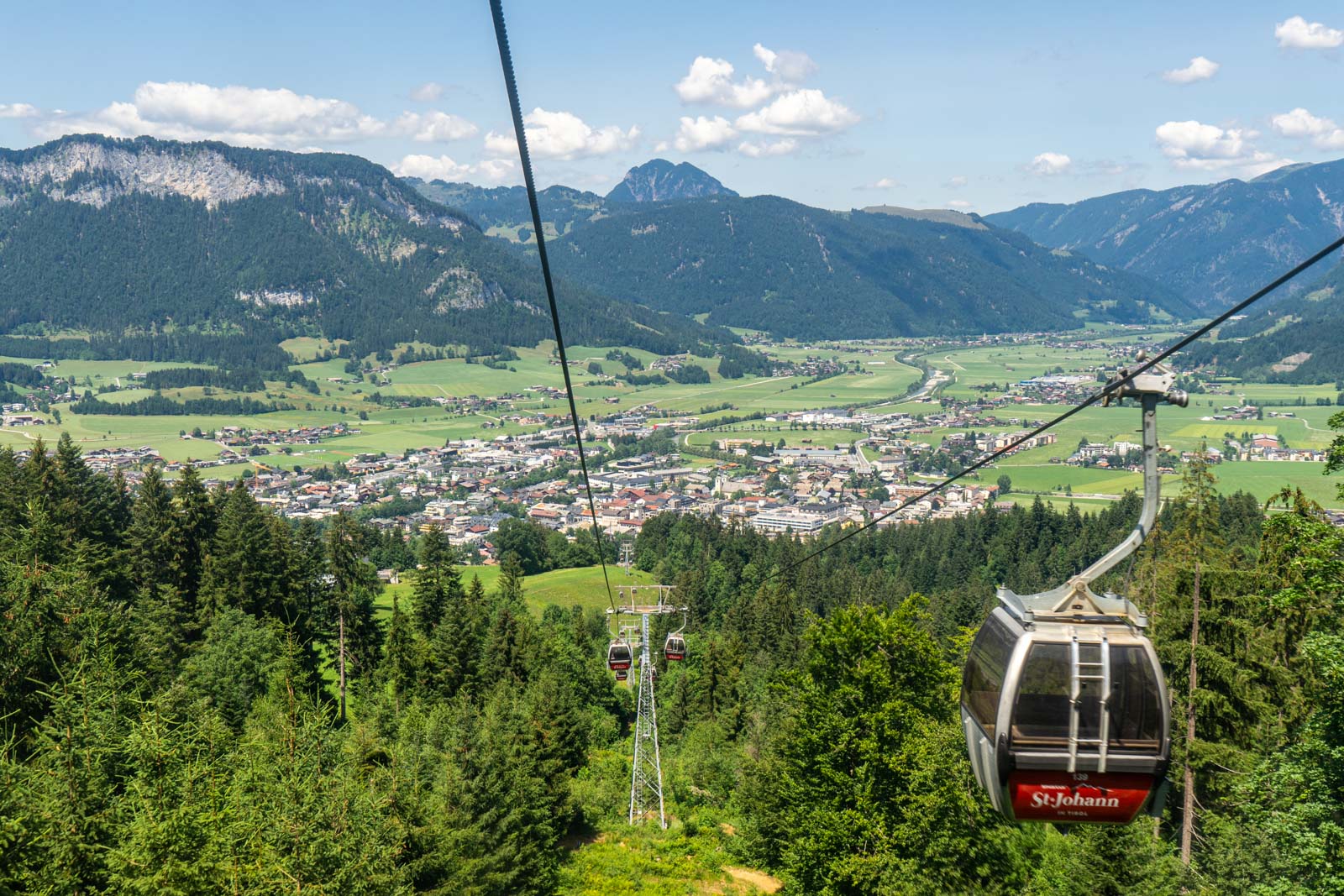 The Harschbichlbahn is taking me over the top of the parts of the mountain that I’ll soon explore as I come back down, but it’s giving me a birds-eye view, an unusual perspective for the average hiker.

I look at the paths that wind their way down, taking the slope at a reasonable angle… And, as a result (intentionally or unintentionally) also extending the trail through the most scenic parts. 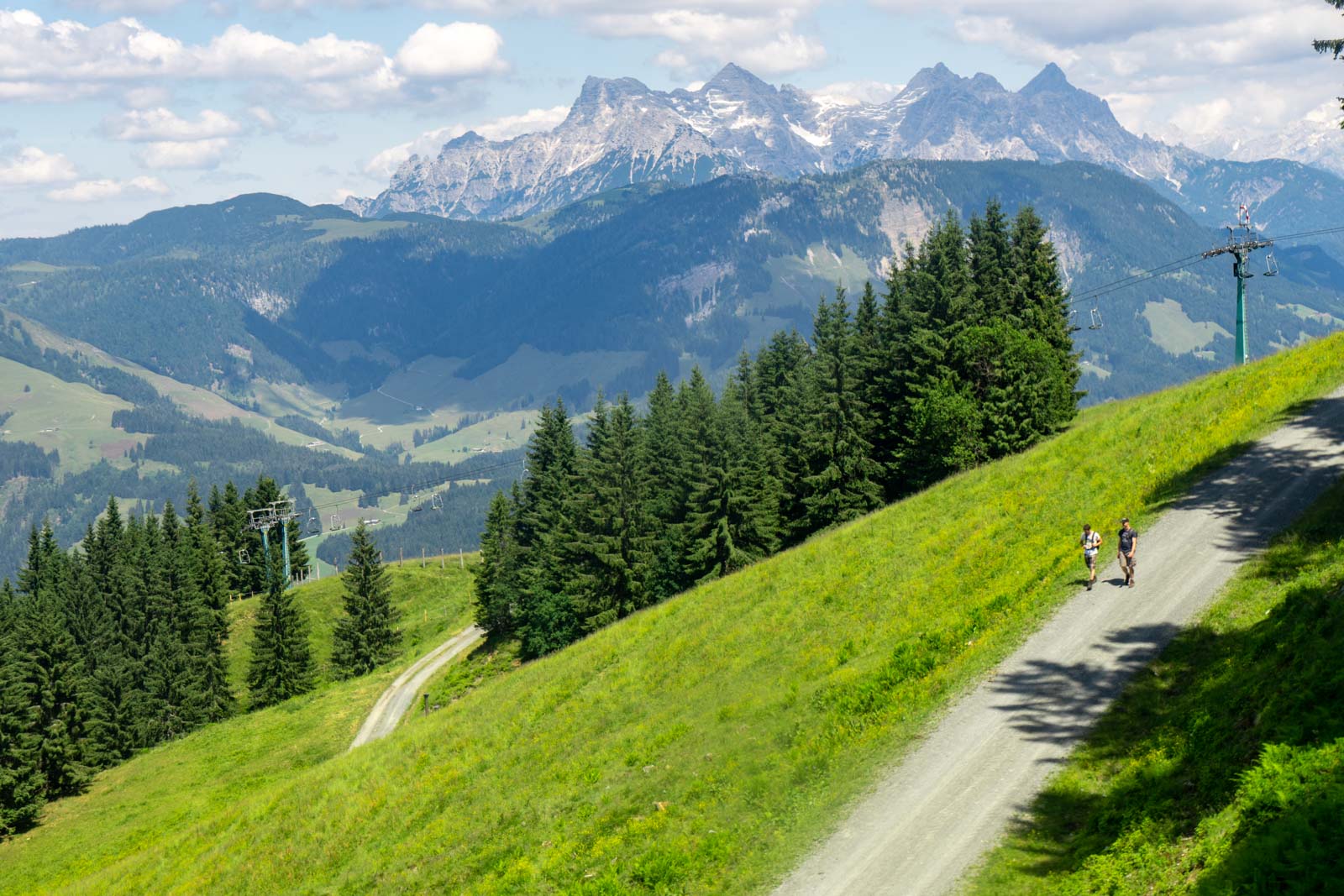 The ride up on the Harschbichbahn is the last point of my time on the mountain where I’ll have no control. All I can do is sit and watch. When I get to the top, I’ll have some choices to make.

The Harschbichlbahn has one stop on the way up. At this midway station, I continue on to the top, to what is known as Harschbichl. There’s a restaurant and a beer garden here for those who think they’ve earned a drink.

From here, I can see the summit of the Kitzbuhel Horn mountain. It’s one of the options you can take from here, climbing the trail to the top for even better views across the region. 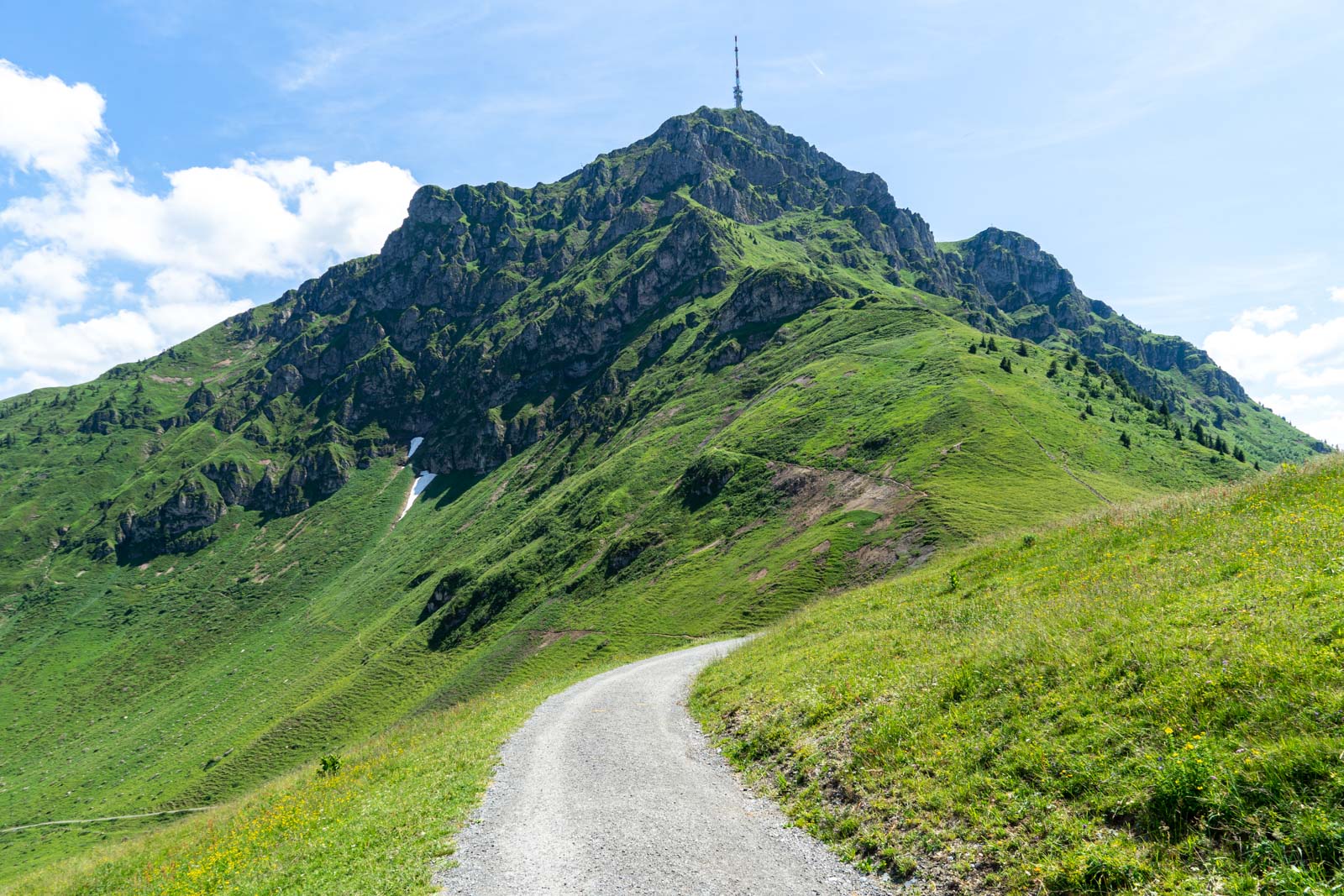 This is also the starting point for the Horn-Gipfel-Höhenweg hiking trail, which takes you up to the summit but then loops around and brings you back a different way. It’s only about 6km long but takes about 3 hours to hike.

I’ve decided to go down from here instead, following the well-worn trail that leads back down to the middle station. I pass other hikers (in both directions) and also see a lot of people cycling. It’s a popular bike path and connects to other trails that go to different towns and villages in the region. 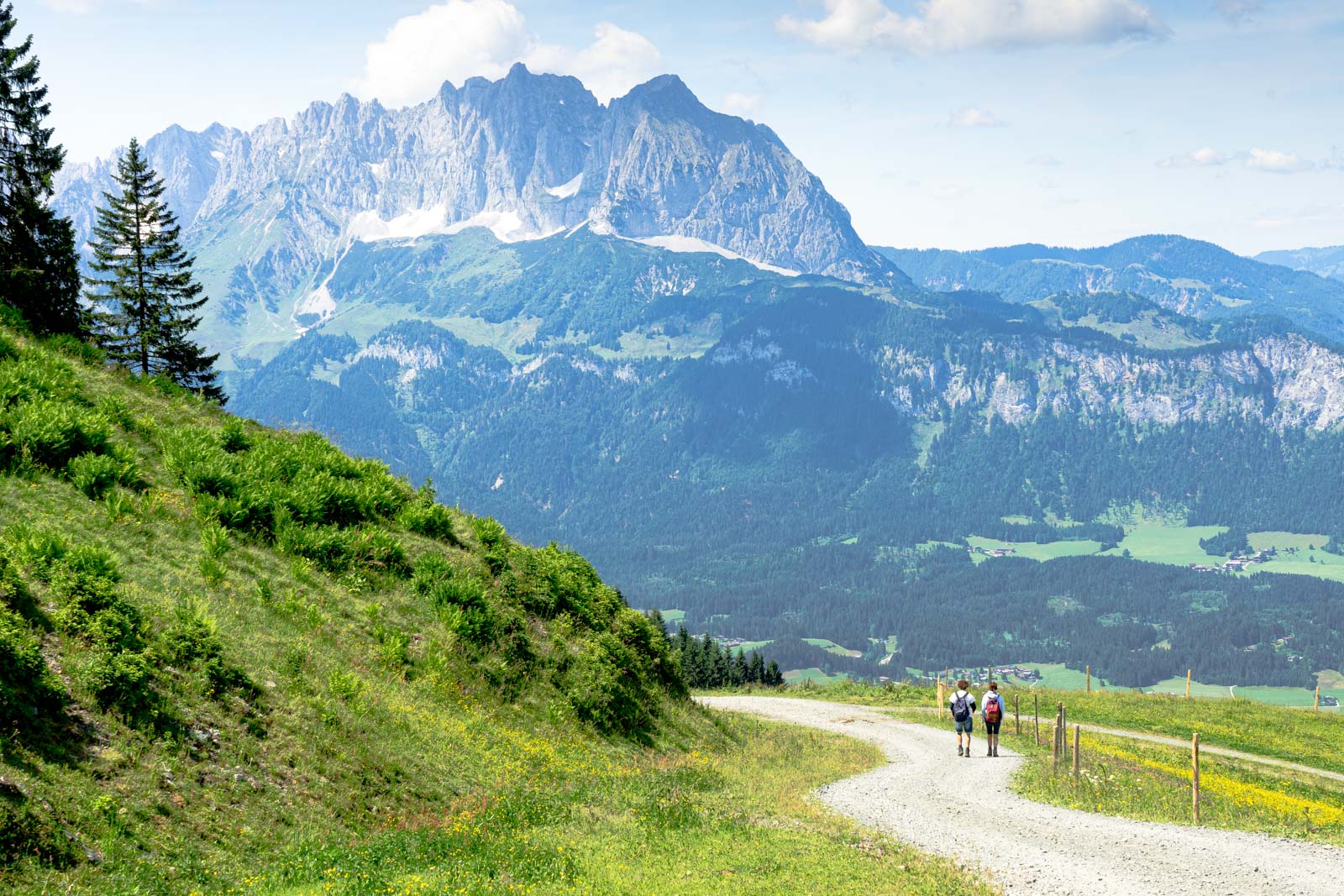 My recommendation would be to get the cable car to the top and then walk down – either directly, or with a detour along the way. I know some people prefer to walk uphill, but I’m not sure this is the mountain for that.

At the middle station of the Harschbichlbahn, you’ll find the Kletterwald Hornpark, which is the main attraction for many people who come up the mountain. It is an adventure centre for people who want to do even more than just hike or cycle.

There are zip lines that go over a small lake, with a stunning backdrop of mountains. None of them are particularly long, and most would be suitable for any age. 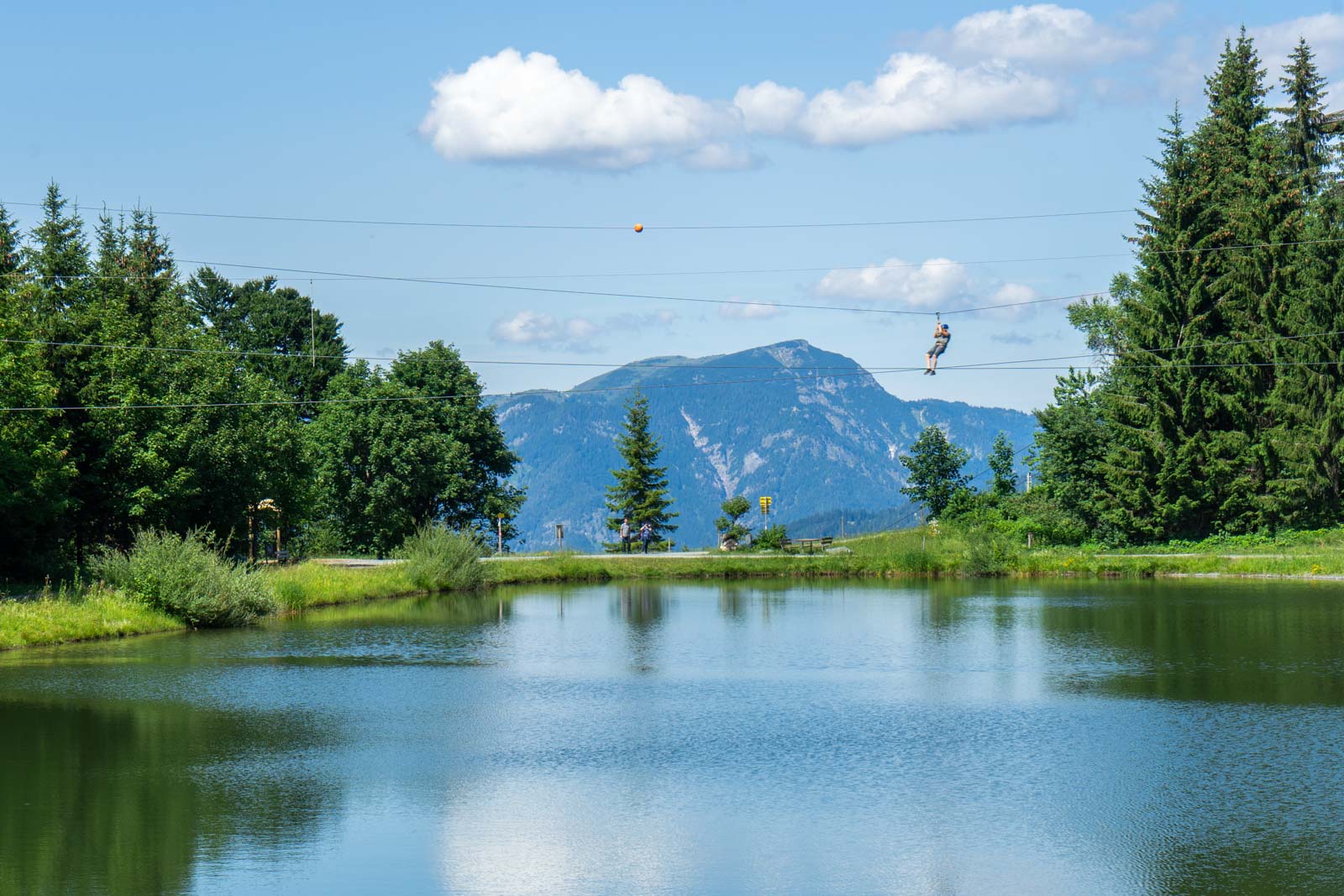 There is also a ropes course that goes through the trees around the lake, which is challenging but perhaps not quite as scary as the zip lines (depending on how bad your fear of heights is, I guess). 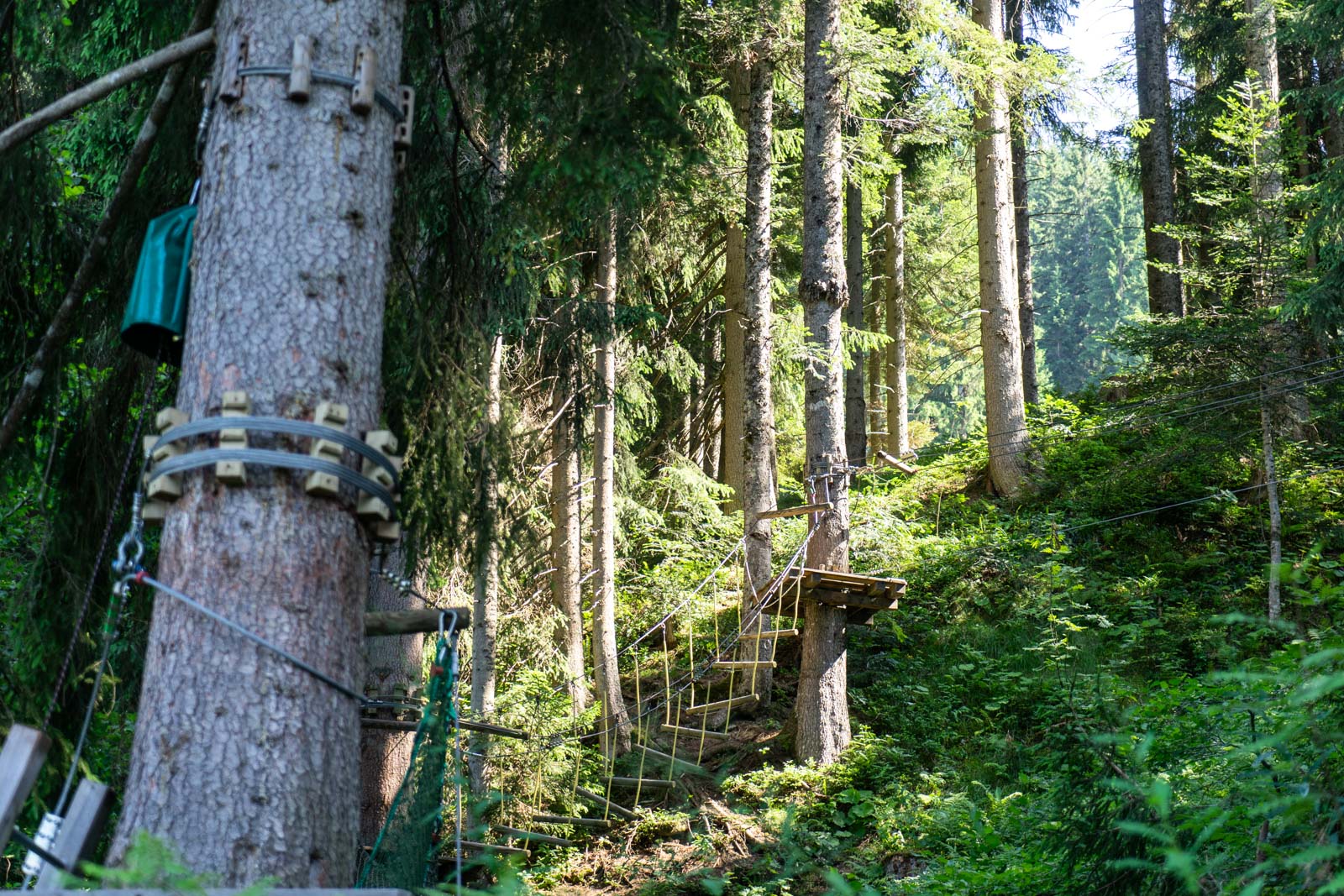 I notice that most of the people on both the ropes course and the zip lines are kids, so there’s no excuse for me not to give it a try. Except that I want to see as much of the region around St Johann as possible, so I’m going to keep on moving (at least, that’s how I justify my trepidation).

There is another adventure I’m going to brave, though. An exhilarating one where I am completely in control.

It’s mountain carting, perhaps the most enjoyable way to get down the hill. I wonder whether I’ve been a sucker for walking all these years, when I could have just been using a mountain cart (not that I’ve ever seen one before, mind you). 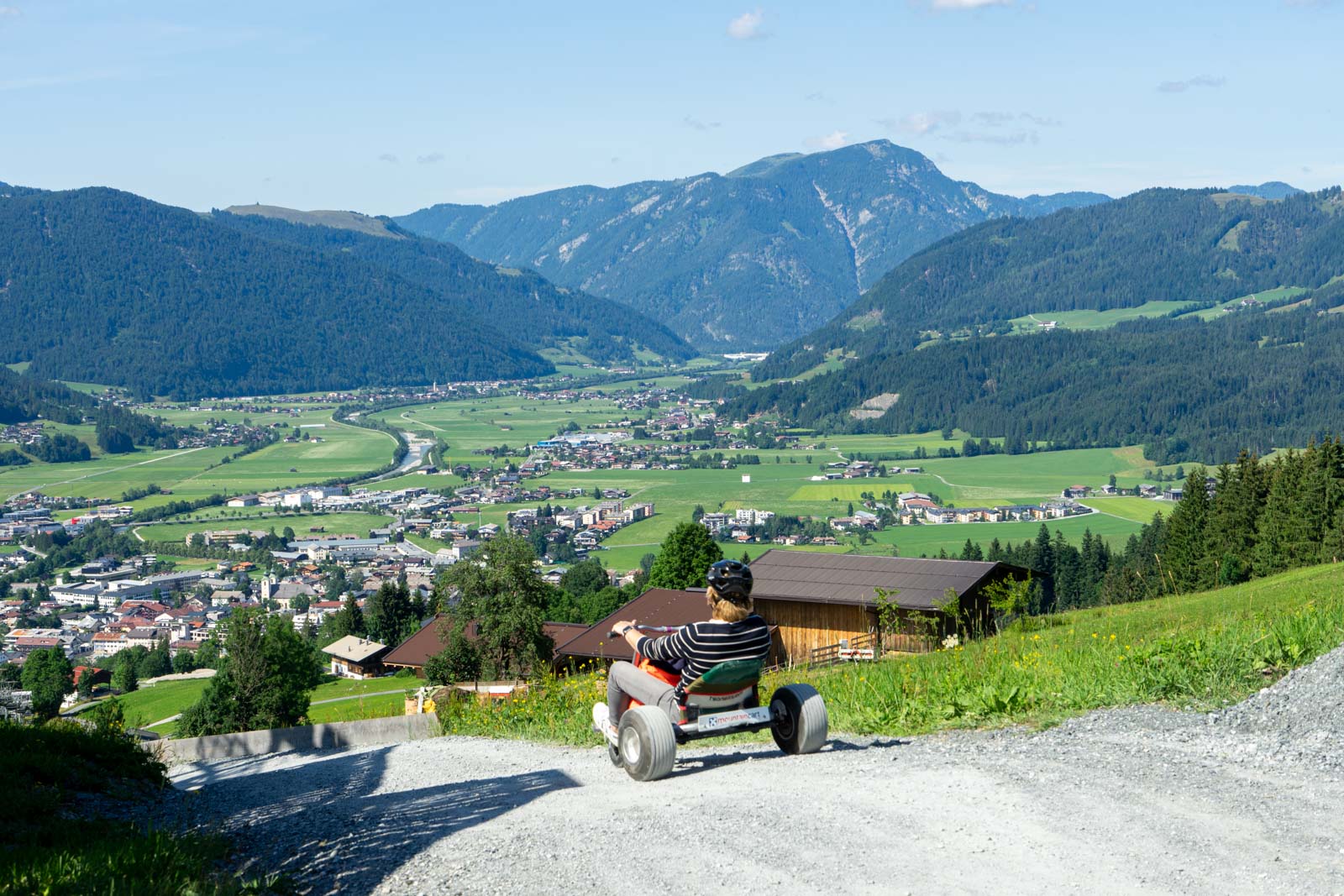 At the midway station at Koasaburg, I climb onto my mountain cart, a tricycle with thick wheels and basic steering handlebars. I use my feet to push myself down the start of the ramp before gravity takes over. And I’m off, careening down the mountain.

It’s amazing how fast it feels like you’re going, even though it’s probably much slower than I think. But with a narrow track and constant turns, I need to concentrate and steer my way along.

There are several ways to get down from Harschbichl Mountain to the Austrian town of St Johann in Tirol. Taking a mountain cart looked like the most fun, so I thought I would try (nervously)! And it was great fun… until I crashed while trying to reposition my GoPro… as you’ll see in this video. #TurnUpTirol #stjohannintirol #feelaustria #LoveTirol …with @visittirol

There are two brakes – one of either side of the handlebars – that I use a little to liberally at first. But as I get comfortable, I let the mountain cart go even faster and by the time I’m approaching the bottom, about 20 minutes later, I’m very comfortable with my driving.

Mountain carting might not be the kind of thing that is top of mind when you’re considering where to go on holidays. But it’s one of the reasons I end up thinking quite a lot about why so many people opt for cities, rather than regions like this.

It’s a fun experience – something a bit out of the ordinary. Mountain carting may not be reason enough to choose somewhere as a destination. But combine it with the cable car up the mountain, the hiking, the beer garden, the zip lines – and you’ve got a pretty good day of holidays (especially for a family or a group of friends).

Is this not a better escape from daily life than the crowds of a big city? 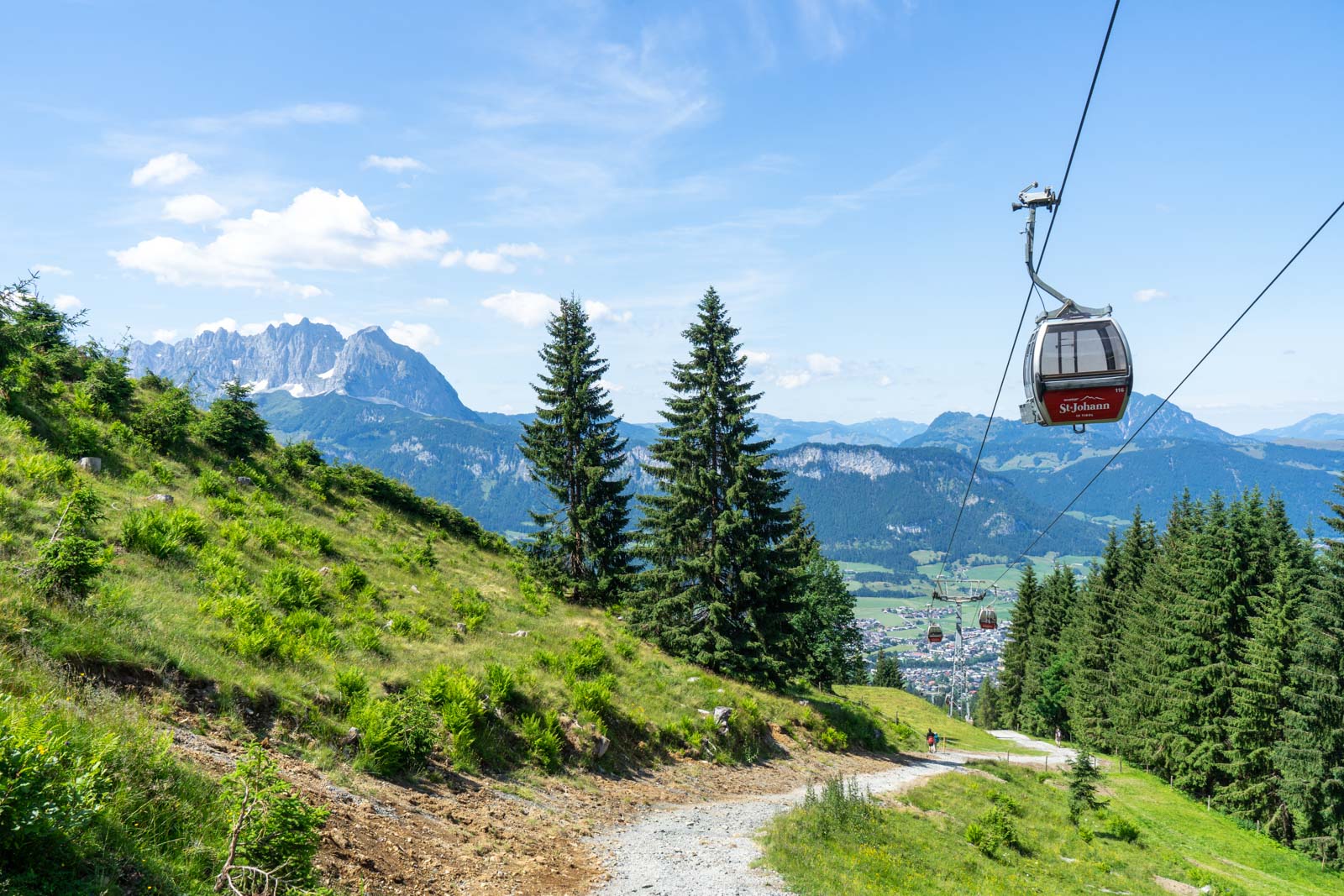 It makes sense to use accommodation in St Johann as your base – and it’s a very pretty place in its own right.

Traditionally, St Johann was a small market town – and it still has that atmosphere. The central square has restaurants and cafes opening onto it and there are regular fairs and events held here. 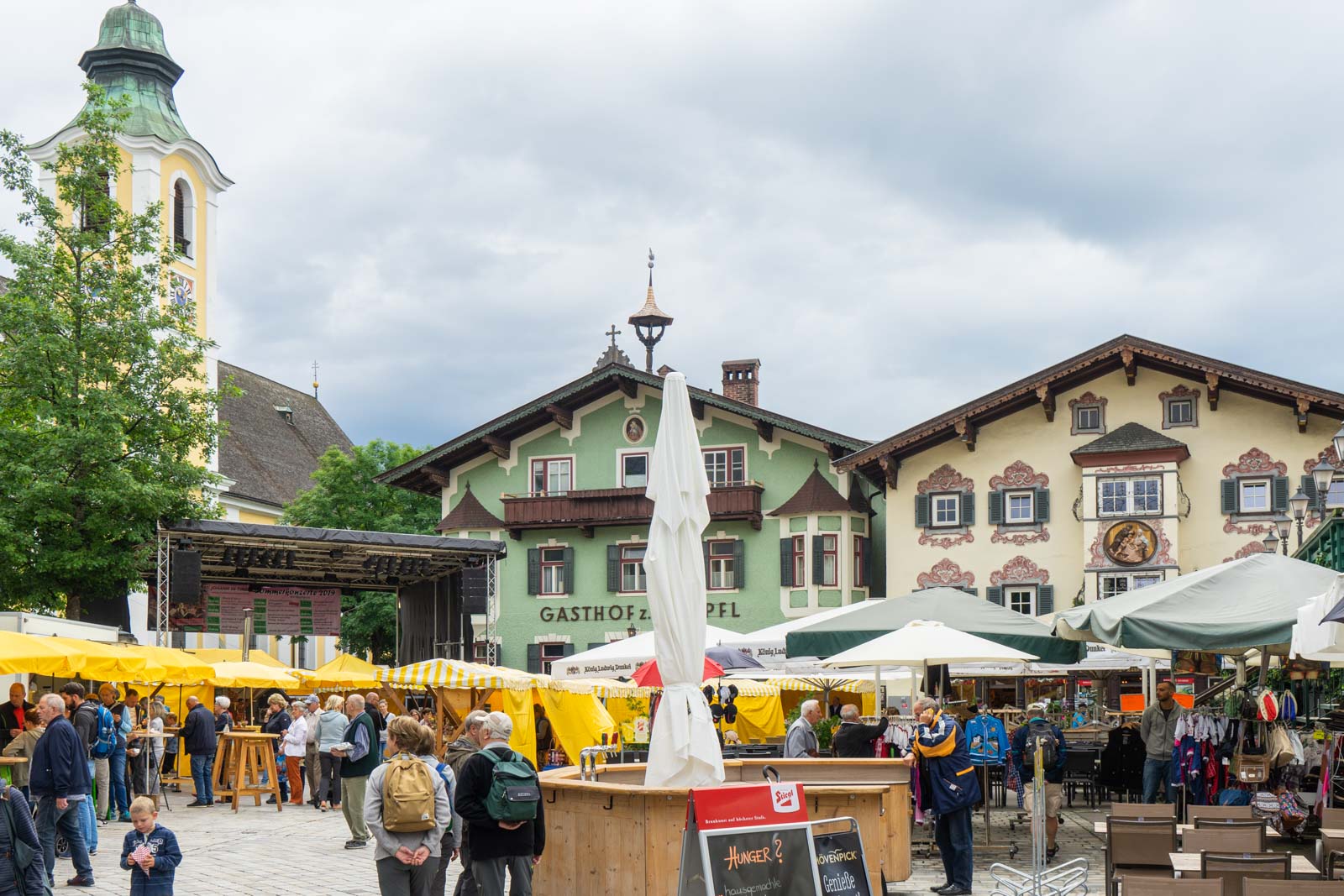 Nearby is the 30-metre-high tower of the Huber Brau brewery, where you can try different beers from this 300-year-old business and enjoy the views at the same time. It’s one of the icons of the town.

The wealth that was generated over the centuries from the trade and the local mining industry can be seen in the buildings, with their colourful painted facades and decorated windows. Although there’s been modernisation here – particularly to cater for the tourism industry – the heritage is clear.

It’s the infrastructure for tourism that makes me realise that a few days here is really no more difficult to organise than a trip to a big city. 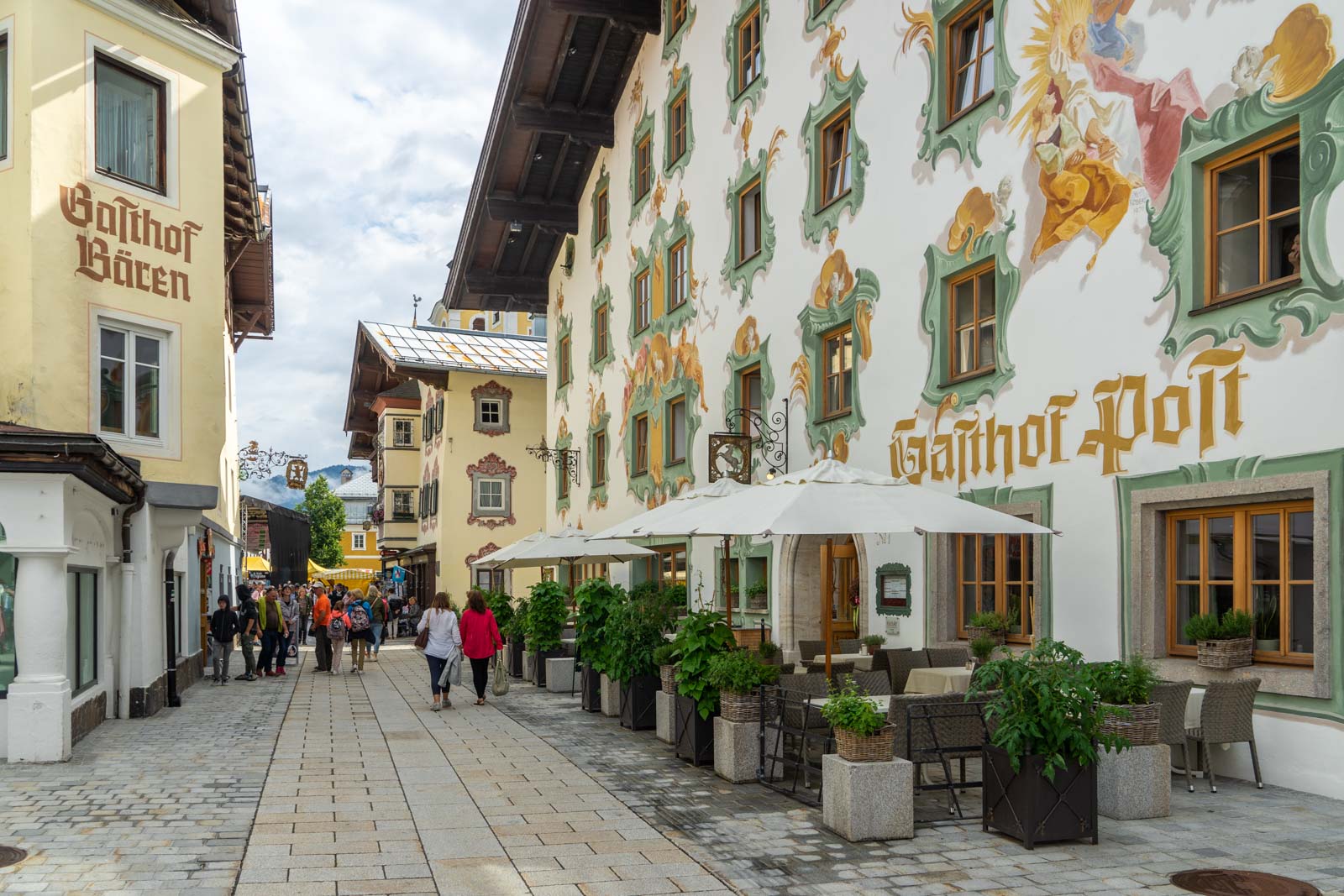 St Johann is very easy to reach, for instance. From the main station of Innsbruck, it is just 75 minutes by direct train, with lots of different options throughout the day.

With a car, it will take about the same time to reach St Johann from Innsbruck, but you’ll get the convenience of having a vehicle to explore some of the other areas around the town that are harder to reach, opening up even more opportunities.

I think one of the best things to do around St Johann is to explore the nature by foot, and there are lots of different tracks you can take to do that. In fact, there are 300 kilometres of hiking trails and cycle paths in total!

I look at some of the options and have trouble deciding which one to do with the spare time I have. The Greissbachklamm to Alemnrunde walk looks particularly interesting, following a river into a gorge, and up through forests.

But I end up choosing to do the Eifersbacher Waterfall hike, which has some of the same elements – but an even more scenic waterfall, I’m promised. It also has the advantage that you can walk to the start of it from St Johann town. 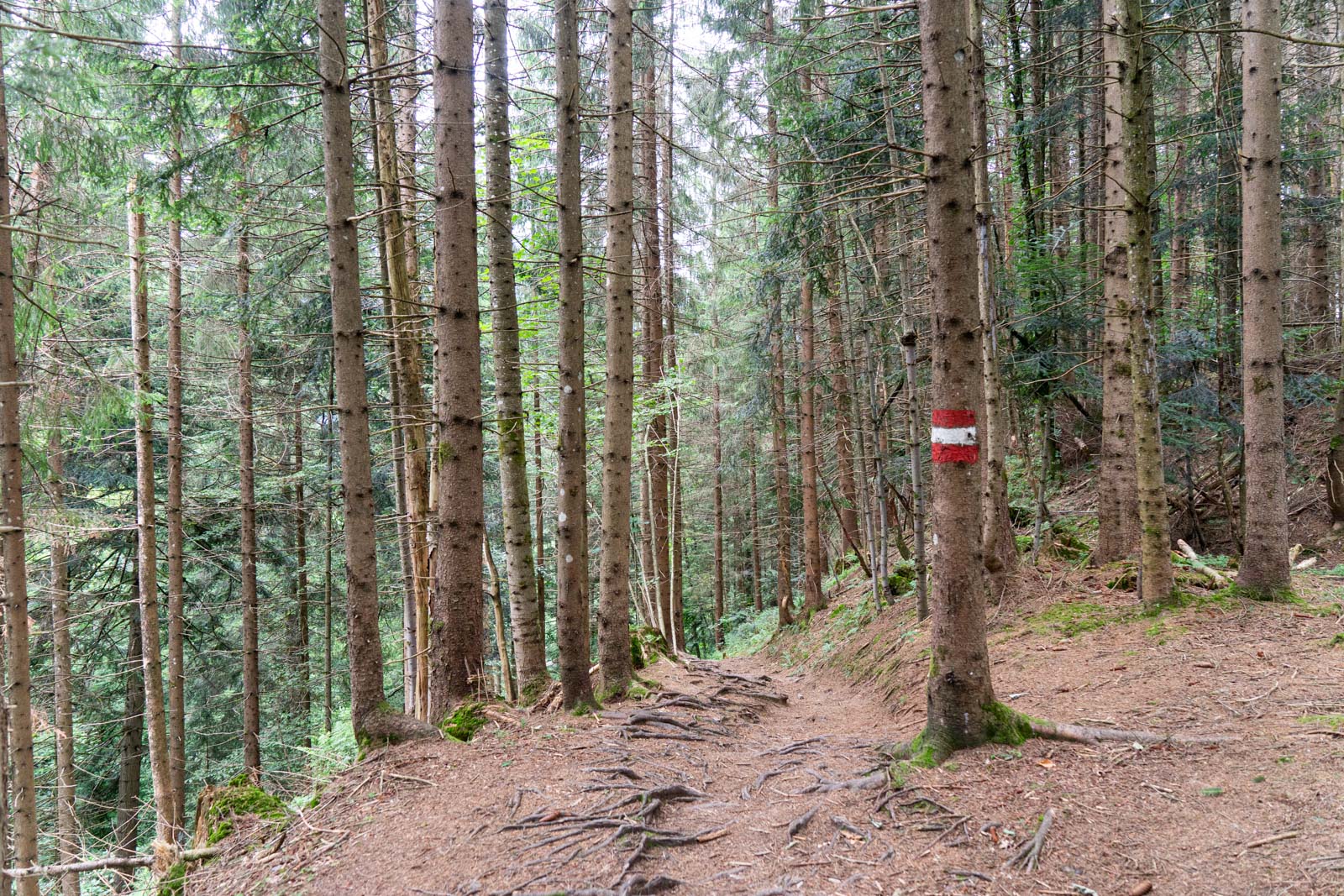 It starts through the meadows and past farm houses, before plunging into the forest. I walk past a small chapel amongst the trees at one point, a sign of the connection between the nature and the community here.

After walking alongside the river, I reach Eifersbacher Waterfall, which has a dramatic 25 metre drop at the top and then cascades down several smaller irregular terraces made from rocks. There are a few bridges that you can use to cross the water and get different viewpoints. 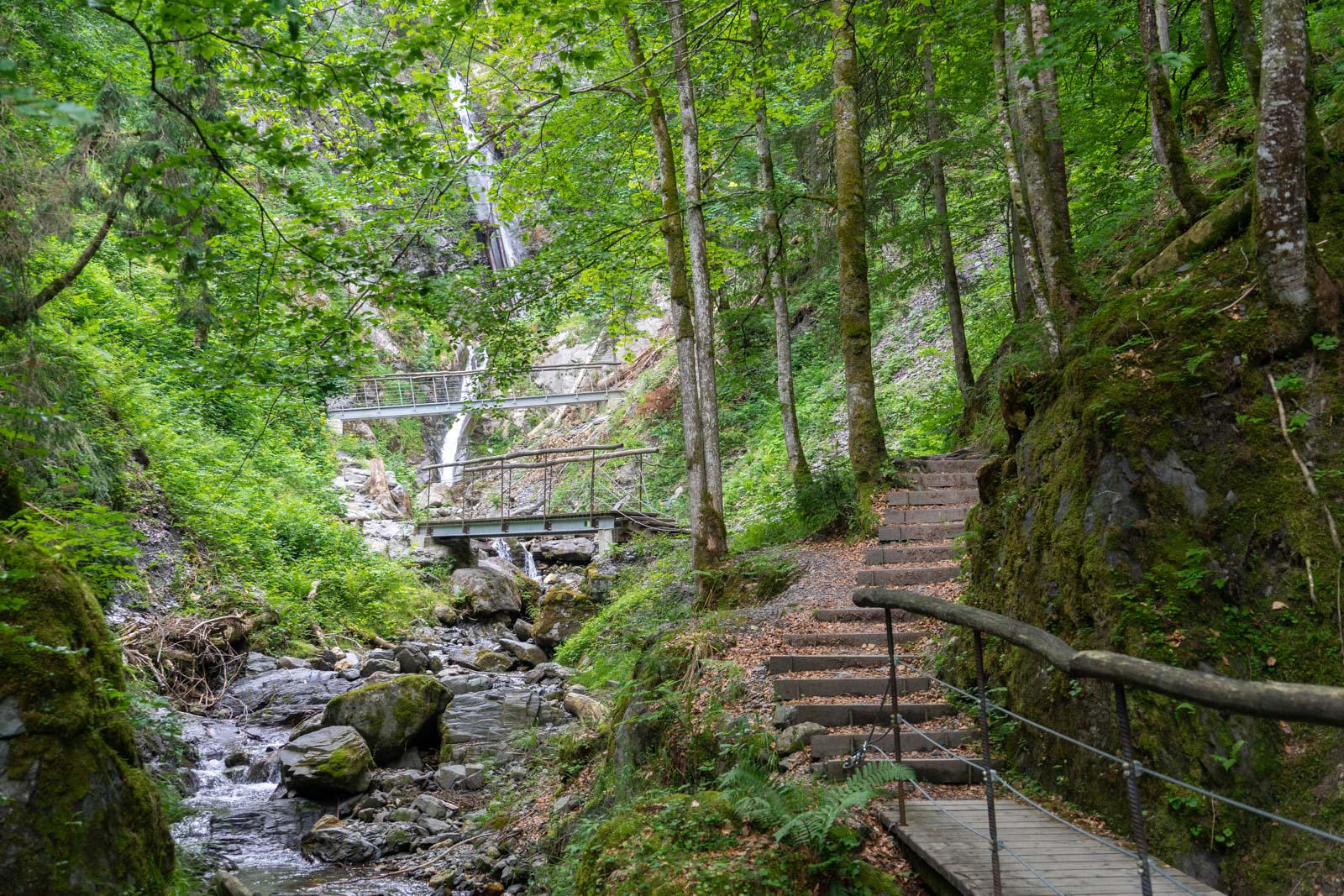 From here, you can climb up a steep path to a forest road that creates a loop, taking you back to where you started. I notice that there are other options to take different tracks, to make your own choices, to turn this hike into whatever you would like it to be. 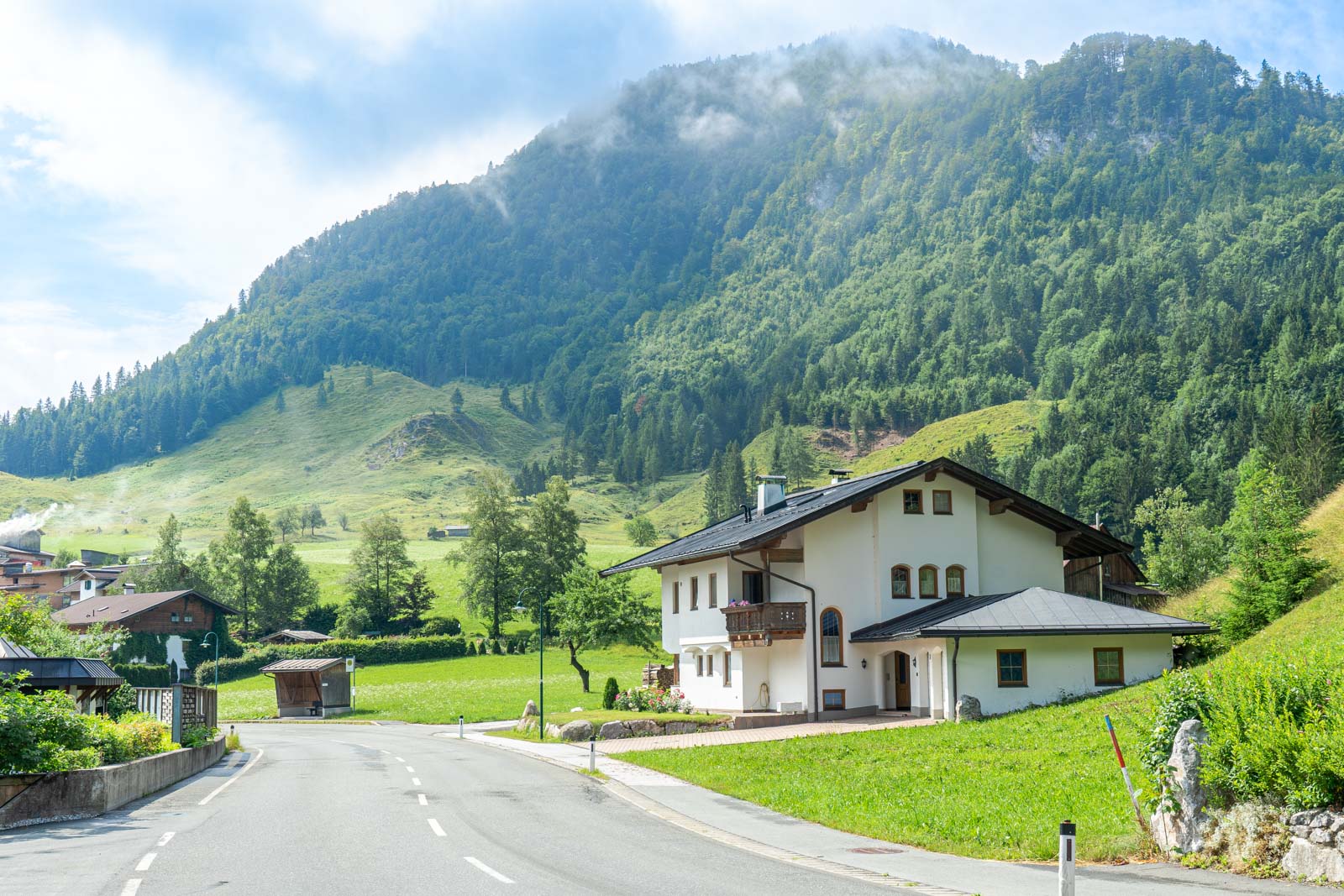 My time in St Johann is relatively short – certainly not nearly as long as you should spend here. A couple of days does not feel like enough when you know how many different paths and trails there are, taking you out to more waterfalls, to different rivers, up the mountains, to the farmsteads and inns.

But even a couple of days is enough to see that an escape like this in nature can be rejuvenating – and Tirol in summer offers the perfect setting for that.

Time Travel Turtle was supported by the Austrian National Tourist Office and Visit Tirol in partnership with Captivate but the opinions, over-written descriptions and bad jokes are his own.