I feel a bit sorry for the Habsburgs. Well, actually, maybe that’s not the best way to put it.

I mean, they had immense wealth and luxurious homes. They had power and respect. I don’t pity them for that.

But it seems they didn’t have happiness. And that is worth feeling sorry for someone. Even if they didn’t think they wanted happiness. Or… especially for that reason. 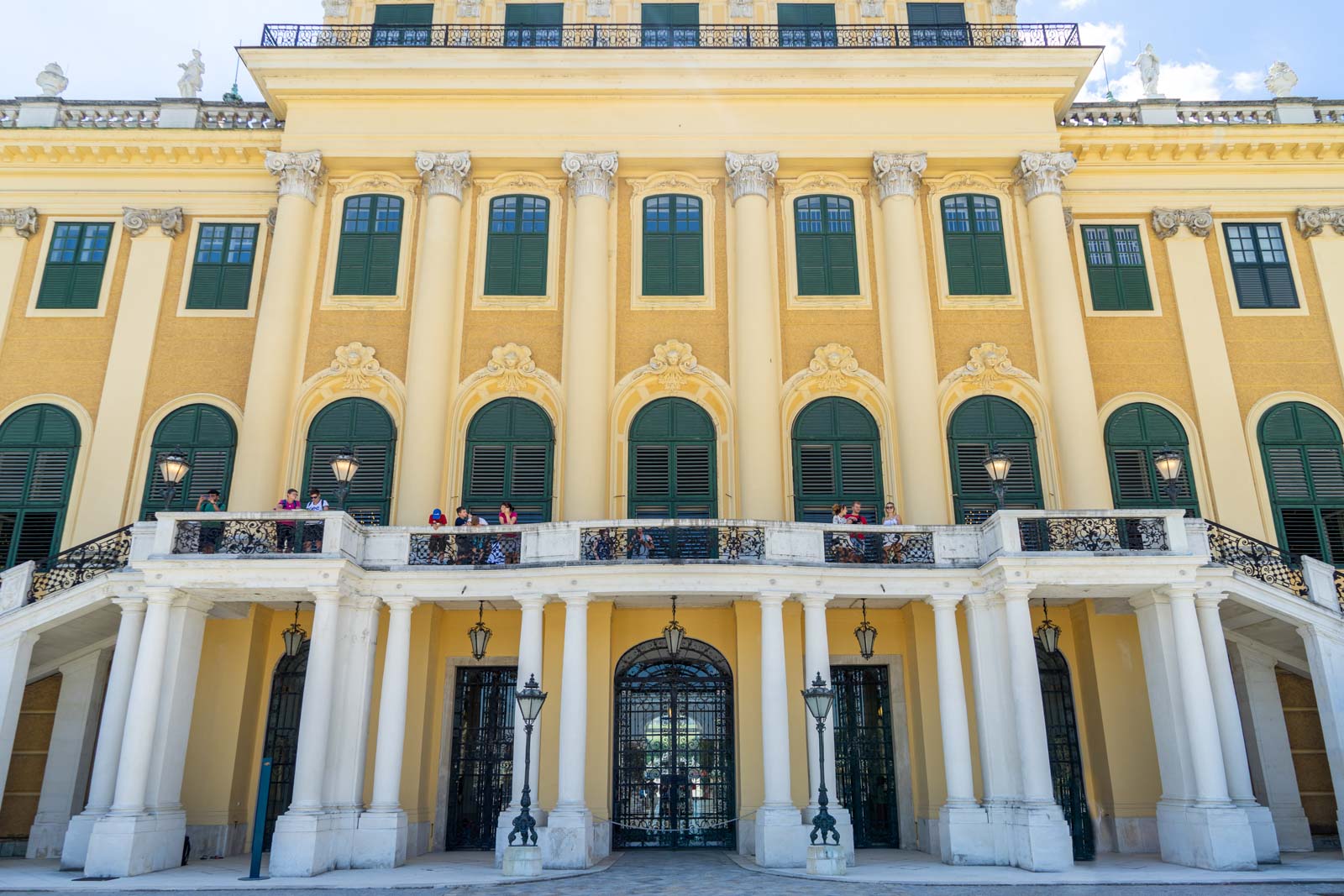 This is what I take away from my visit to the stunning home of the Habsburgs, Schonbrunn Palace in Vienna. (Hofburg Palace may be technically more important, but I think Schonbrunn is much more impressive.)

When I visit, I take the shortest of the tours available to see the interior of the palace. I’ll discuss shortly the different options for how to see the inside of Schonbrunn Palace, but this short tour still covers 22 rooms, so you get a broad perspective of the atmosphere of the residence. 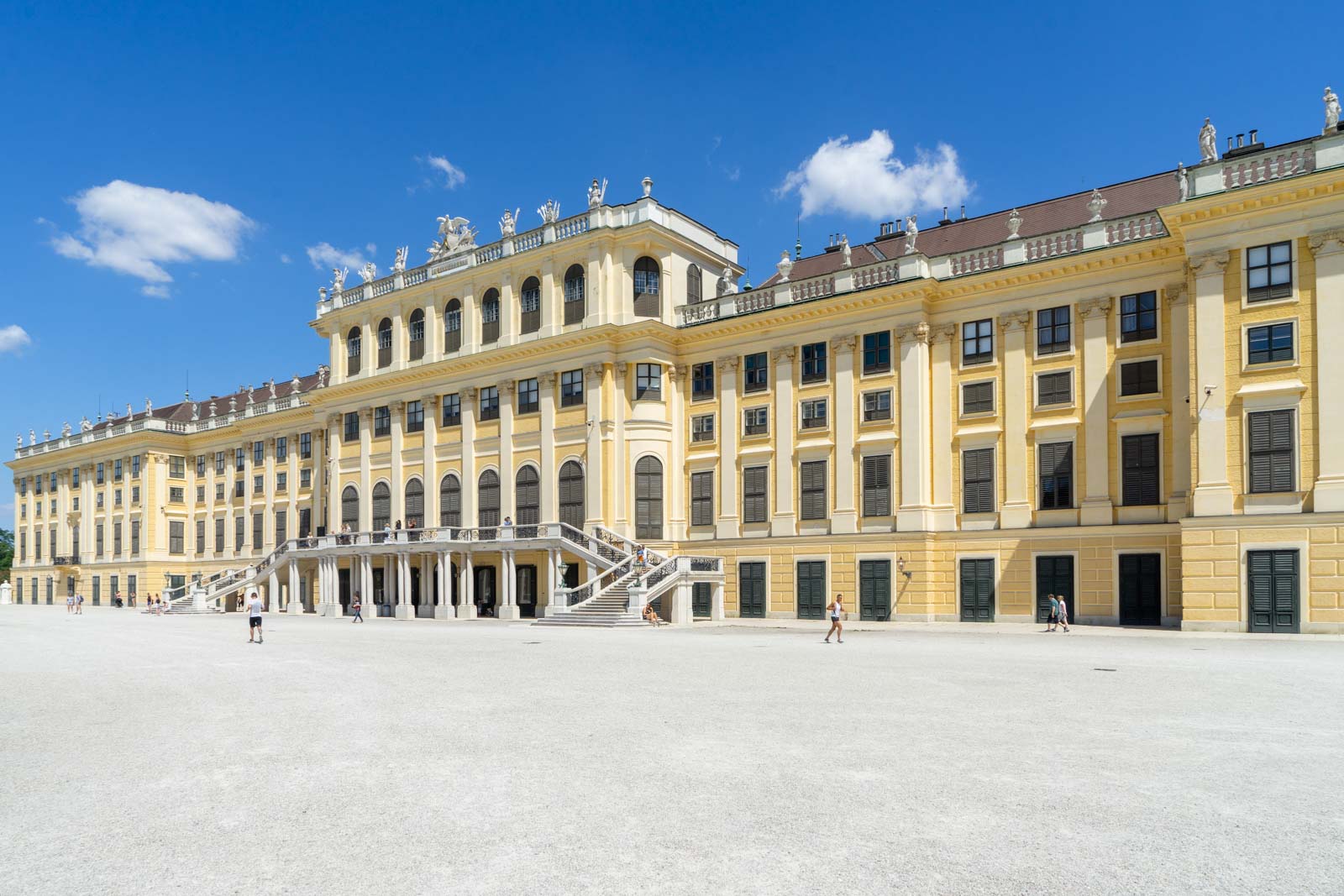 Of course there’s the opulence. Some of the rooms have exquisite decorations, created by the finest artists in the empire. But I’ve been in a lot of European palaces and this one also has some of the plainest rooms I’ve seen, particularly in the residential areas.

These simple decorations are not because the Habsburgs could not afford to splash out with lavish colours and fabrics at Schonbrunn Palace. I’m sure some of the items that are on display are actually very expensive, even if they don’t look it.

And the rooms are not plain out of a respect to the public purse, in a way that I imagine Queen Elizabeth II may do things at Buckingham Palace. 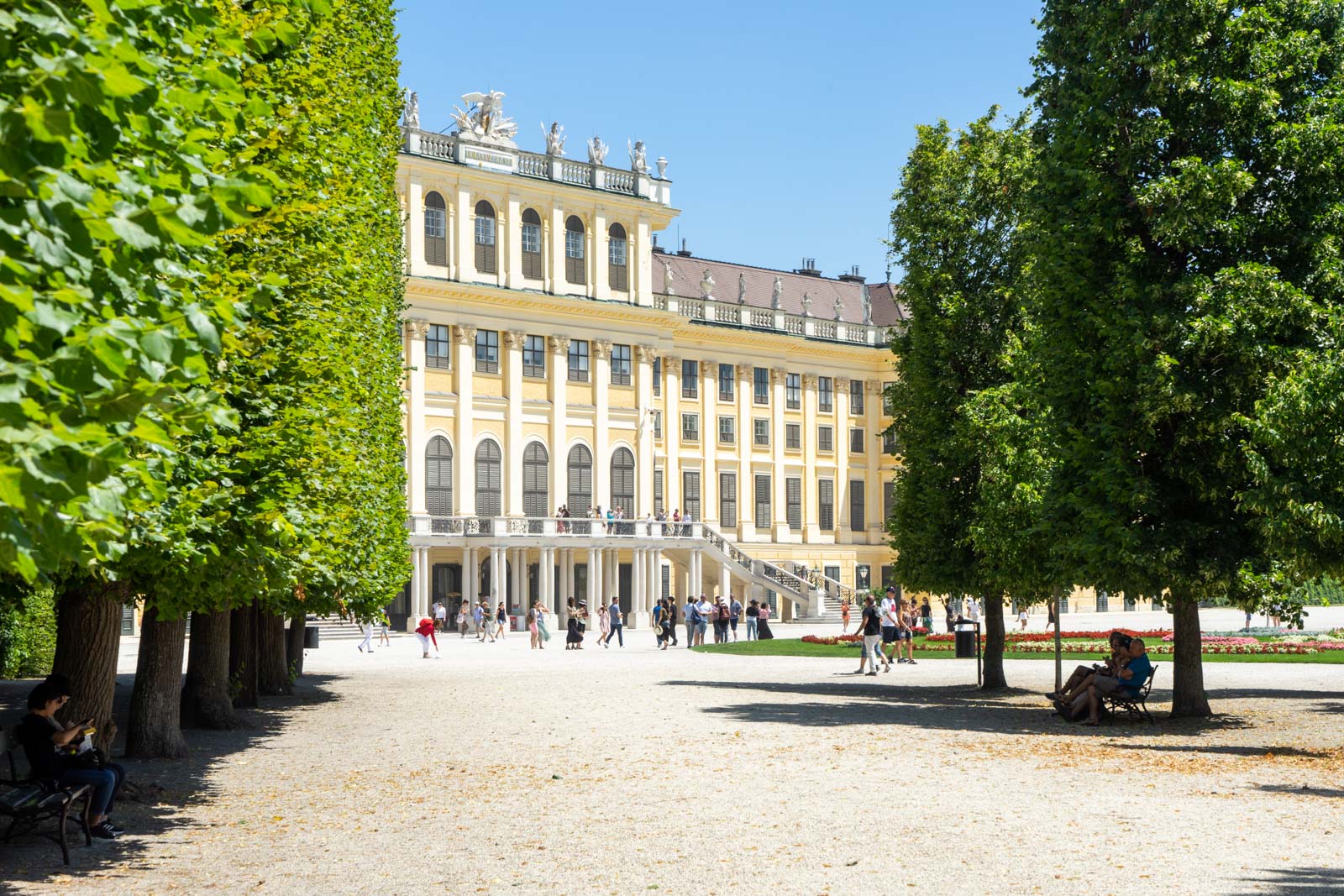 No, the impression I get is that there was a deep-rooted melancholy that filled this palace and that is reflected in the way that it was decorated. For generations, it appears as thought the Habsburgs would head to their holiday house at Schonbrunn and take all their emotional baggage with them.

Because that’s essentially what Schonbrunn was – a summer residence. Originally the Habsburgs used the estate as hunting grounds from the 16th century. It passed through several hands until it became the property of the Eleonora von Gonzaga when her husband, Emperor Ferdinand II, died. She built the first form of a palace here around 1642.

But it wasn’t until the estate was given to Maria Theresa in 1728 by her father, Emperor Charles VI, that Schonbrunn as we know it began to take shape.

The woman who would become one of Austria’s greatest leaders remodelled the palace, while her husband turned the gardens into the magnificent park that stretches out from the main building. 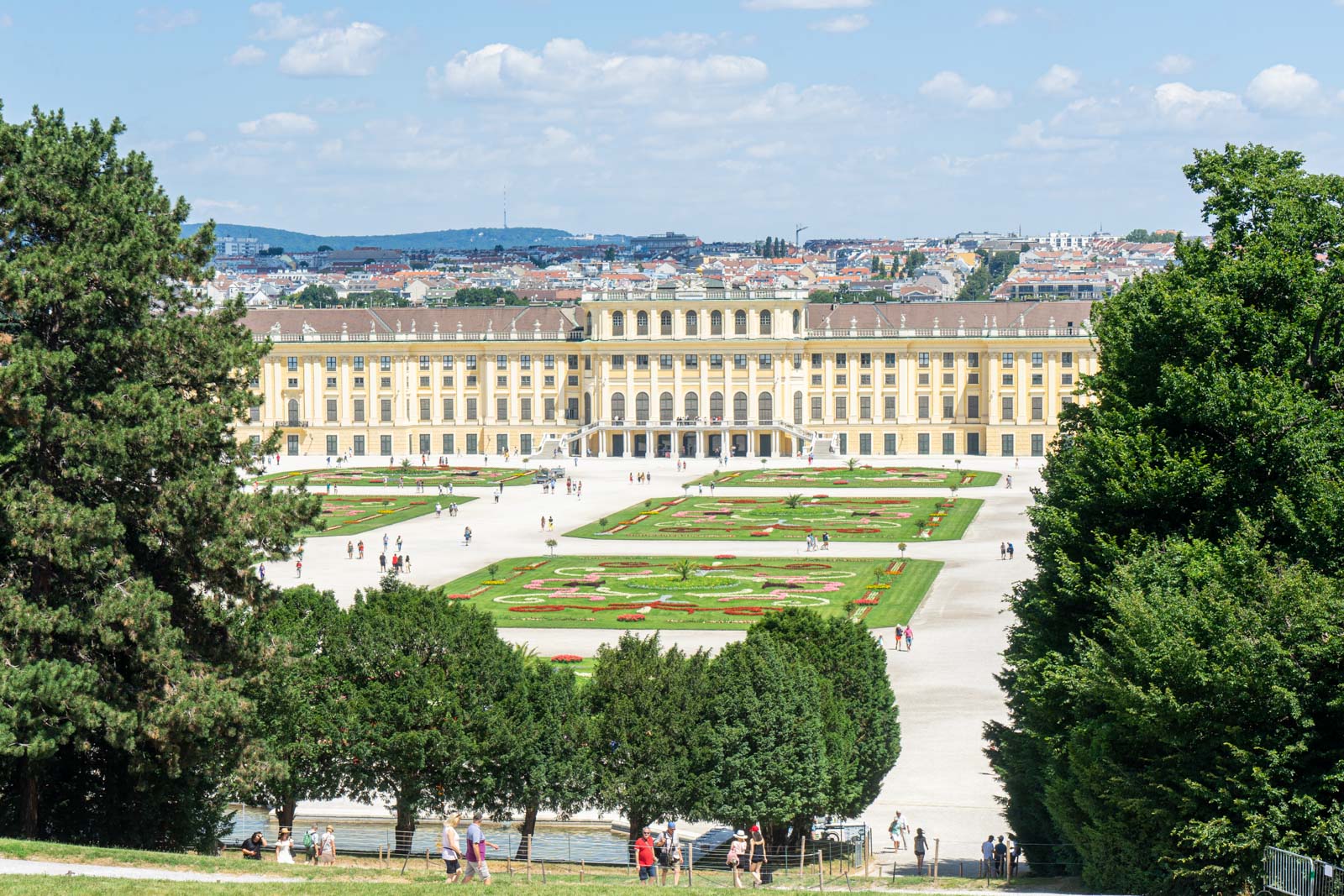 You may notice that all of my photos are from the garden of Schonbrunn. Unfortunately Schonbrunn Palace is one of those silly places that doesn’t allow photography inside, so I can’t show you any of the interiors.

You shouldn’t be disappointed with seeing some different angles of the garden – after all, this landscaped masterpiece is one of the highlights here.

The grounds form an approximate square with each edge about one kilometre long. Leading out from the palace is the Great Parterre, with symmetrical flower beds. It’s the perfect place to stand to get a sense of how scale and intricacy have been blended here. 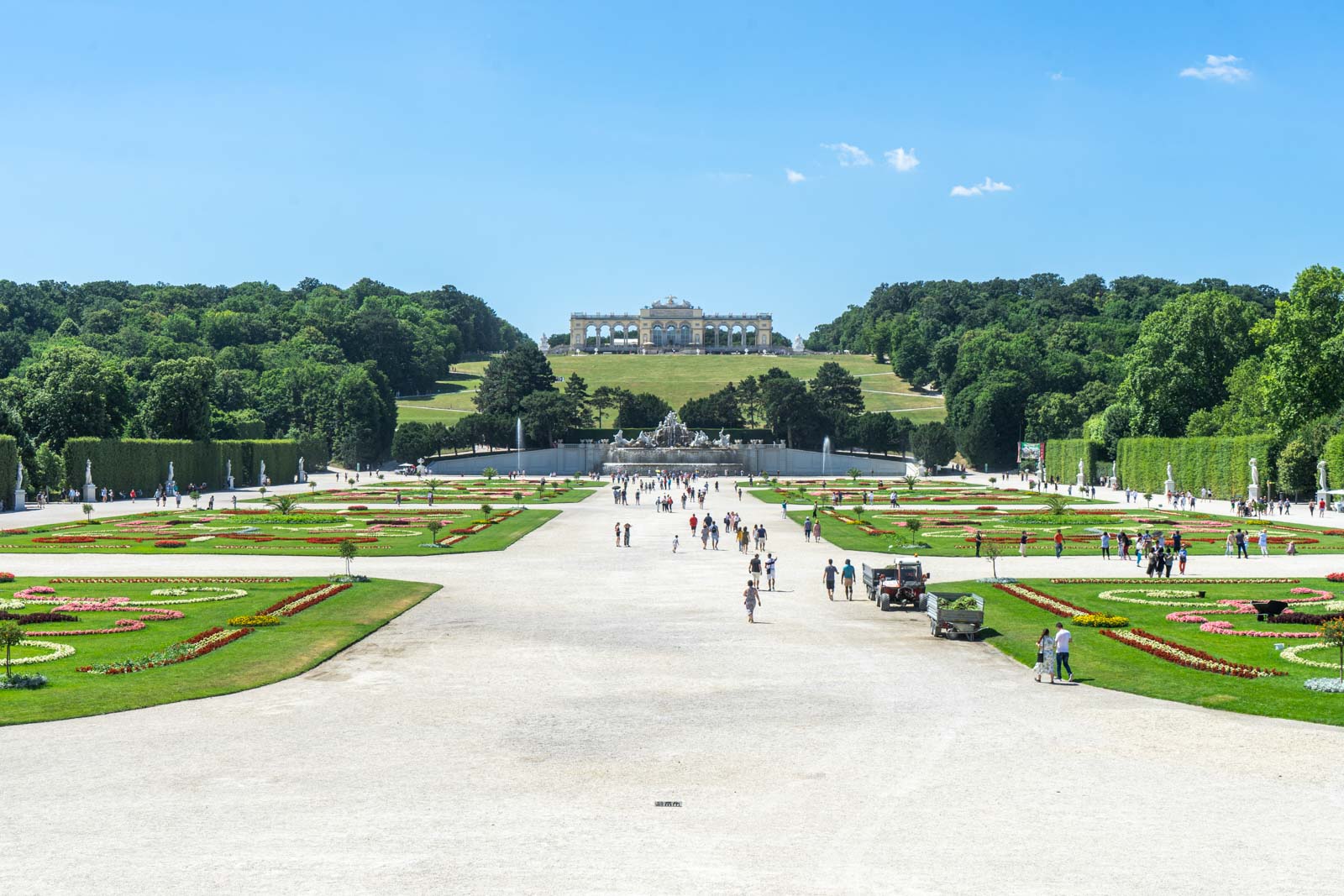 Then there’s the Neptune Fountain at the foot of the hill, before the slope that leads up to the colonnaded Gloriette that gives the best views back down the Great Parterre. 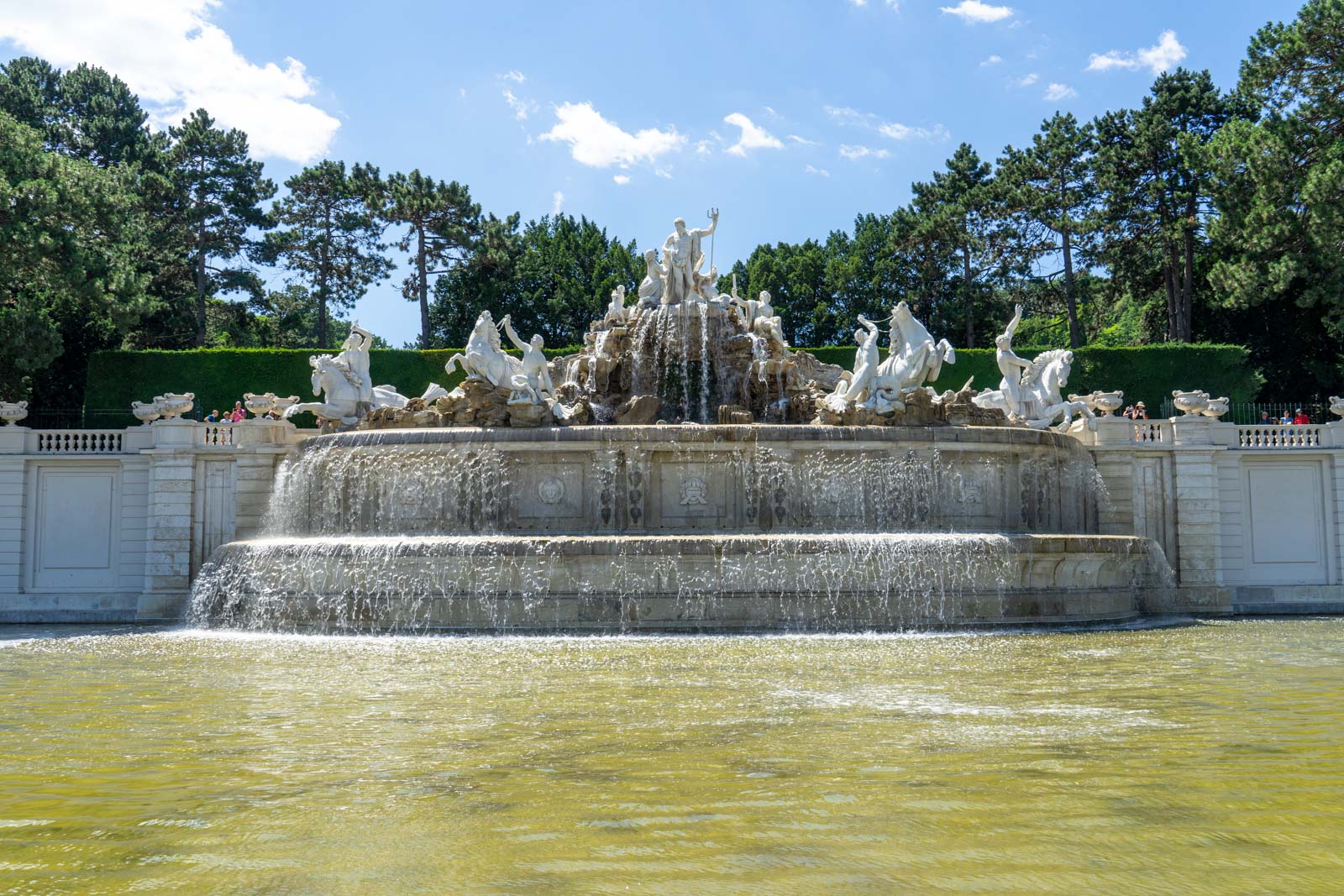 Then, heading out in both directions, are different paths that lead you through other parts of the gardens, to monuments and statues, small houses, and a whole range of different landscapes areas. It actually reminds me a lot of the garden at Drottningholm Palace near Stockholm in Sweden.

It’s easy to spend a few hours walking around, seeing the sights, enjoying the atmosphere. After all, that’s the point. And the gardens have been open to the public since 1779. 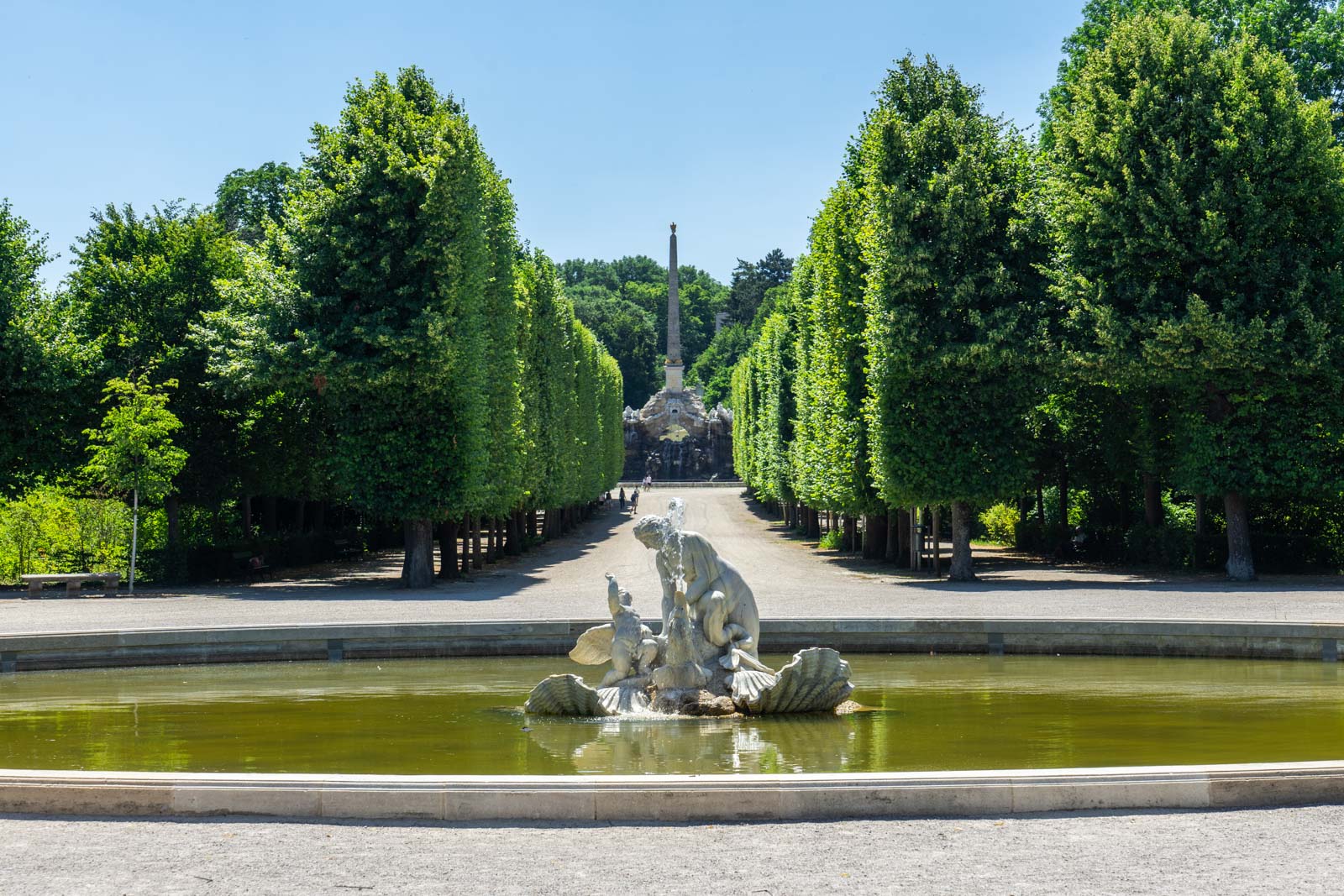 I’m sure there are many Vienna locals who have happy memories of times in the Schonbrunn Gardens. And there will undoubtedly be many more to come.

But inside the walls of the palace, it’s the unhappiness that seems to define the experience. 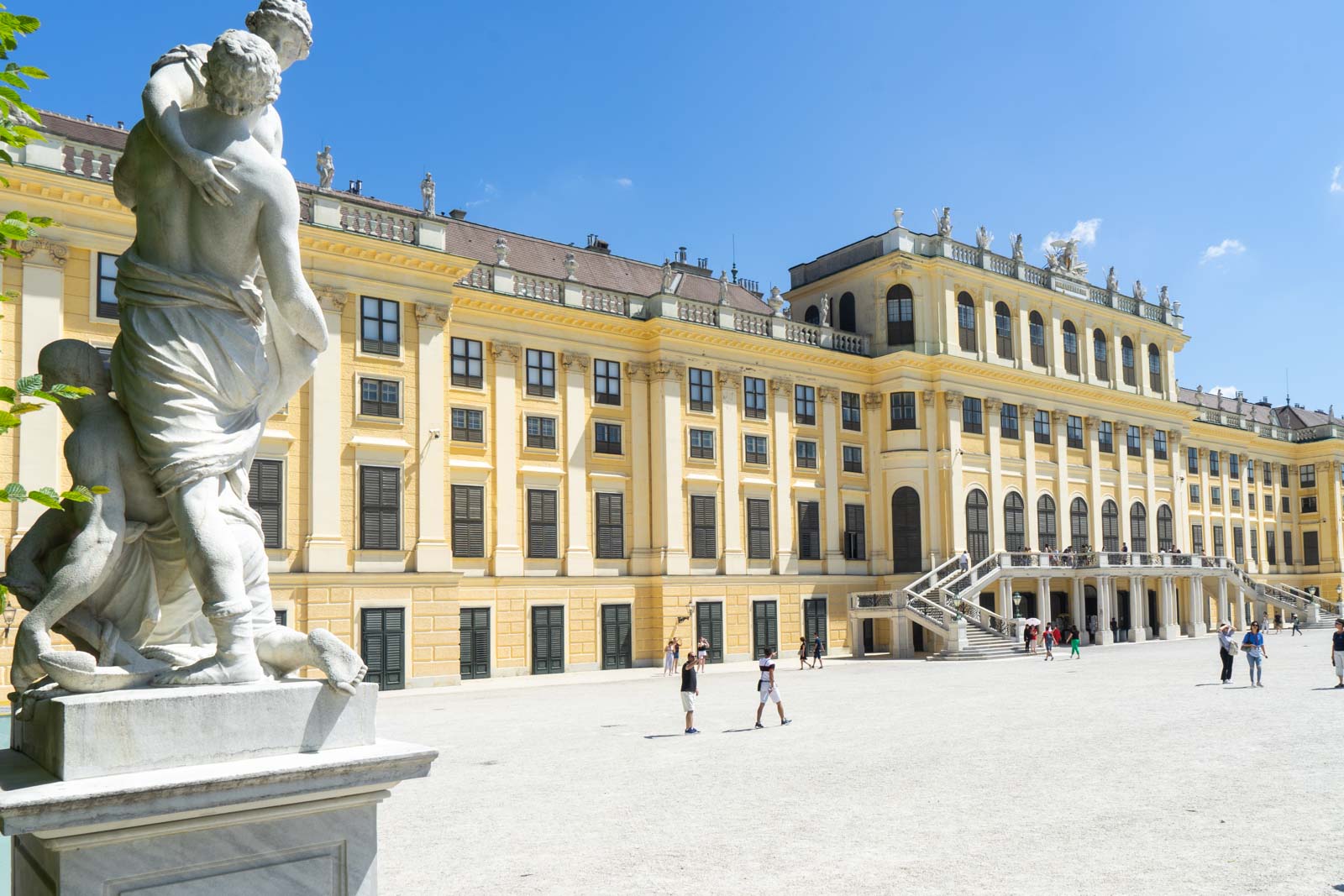 Maria Theresa may have been an impressive leader – an archduchess, a queen, an empress – and a woman who is still revered by Austrians. But her personal life was not one of unbridled joy.

In one of the private rooms, you get a sense of this. There are paintings of her children on the walls and all of them have such dour expressions on the faces.

There may have been love, but there was not much happiness for this family.

Maria Theresa married off her elder children as though they were pawns in dynastic games, worried more about the benefit to the empire than what they wanted. The most famous of them was sent to Frances to be married – her name was Marie Antoinette.

Other than Maria Theresa, the other figure who looms large at Schonbrunn Palace is her great-great-grandson, Emperor Franz Joseph I. He was the longest-reigning ruler of Austria, sitting on the throne until 1916.

But he also brought unhappiness to the palace. He was desperately in love with his wife Sisi, who was famed for her beauty, but it appears to have been unrequited love. She was miserable and spent as much time away as possible, while he devoted himself to his work.

Seeing the bedroom of Franz Joseph is quite a shock. In one corner is a tiny single iron bed where he slept alone and, next to it, a praying-stool. It’s a relatively large room but the furnishings are rather drab. To me it looks like the room of someone who feels that don’t deserve comfort. 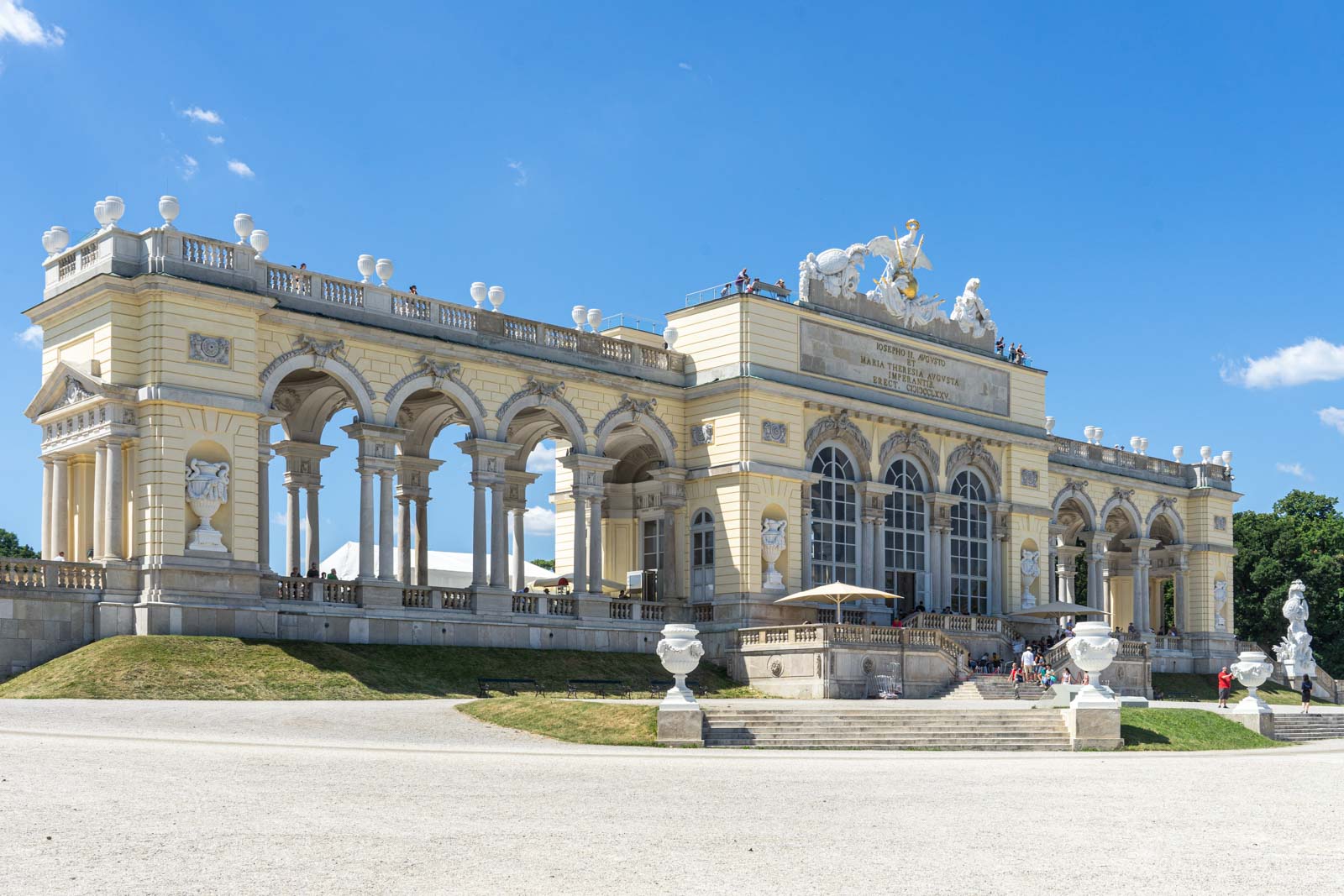 I suppose everyone will have their own impressions of the interior of Schonbrunn Palace, so please just take mine as personal reflections.

Some people will have the dazzling opulence of the Great Gallery as their lasting impression, with its crystal mirrors and white and gold stucco decorations.

Others may be taken by the old-fashioned feel of the Billiard Room, the formality of the Breakfast Cabinet, or the beautiful landscape paintings in the Rosa Rooms. 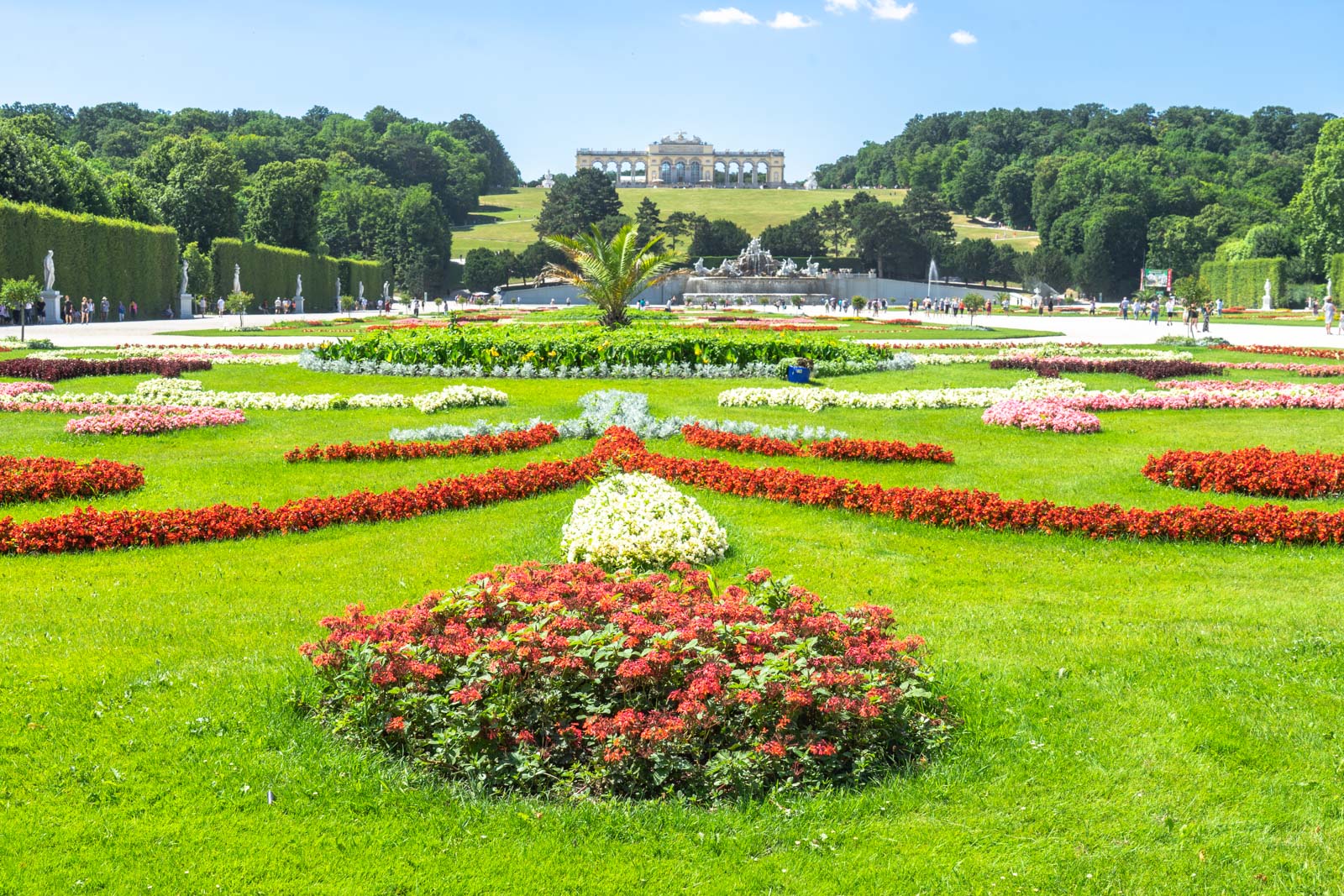 It’s no surprise that with centuries of history contained within these walls, and scores of imperial family members whose stories are associated with the building, that there will be different focuses for each visitor. I suggest coming and finding yours.

There are a few ways you can see Schonbrunn Palace so I would like to give you some tips on the best way to approach a visit. For instance, there are a few different types of tickets but I think there are only three that you should really consider.

The first is the ‘Imperial Tour’. This is the basic access to the interior of Schonbrunn Palace that you will let you see 22 rooms, including all of the most important or famous. It costs €16 for an adult and that includes a free audioguide.

The second is the ‘Grand Tour’ that lets you see 40 rooms, including all the ones accessible on the Imperial Tour. It costs €20 with a free audioguide or €24 as part of a guided tour.

And the third is the ‘Classic Pass’ which gives you the Grand Tour as described above, plus access to four of the key spots in the garden that you need to pay for – the Privy Garden, the Maze, the Orangery Garden, and the Gloriette viewing terrace. It costs €26.50 with a free audioguide for the palace, or €30.50 if you want to be guided through the palace. 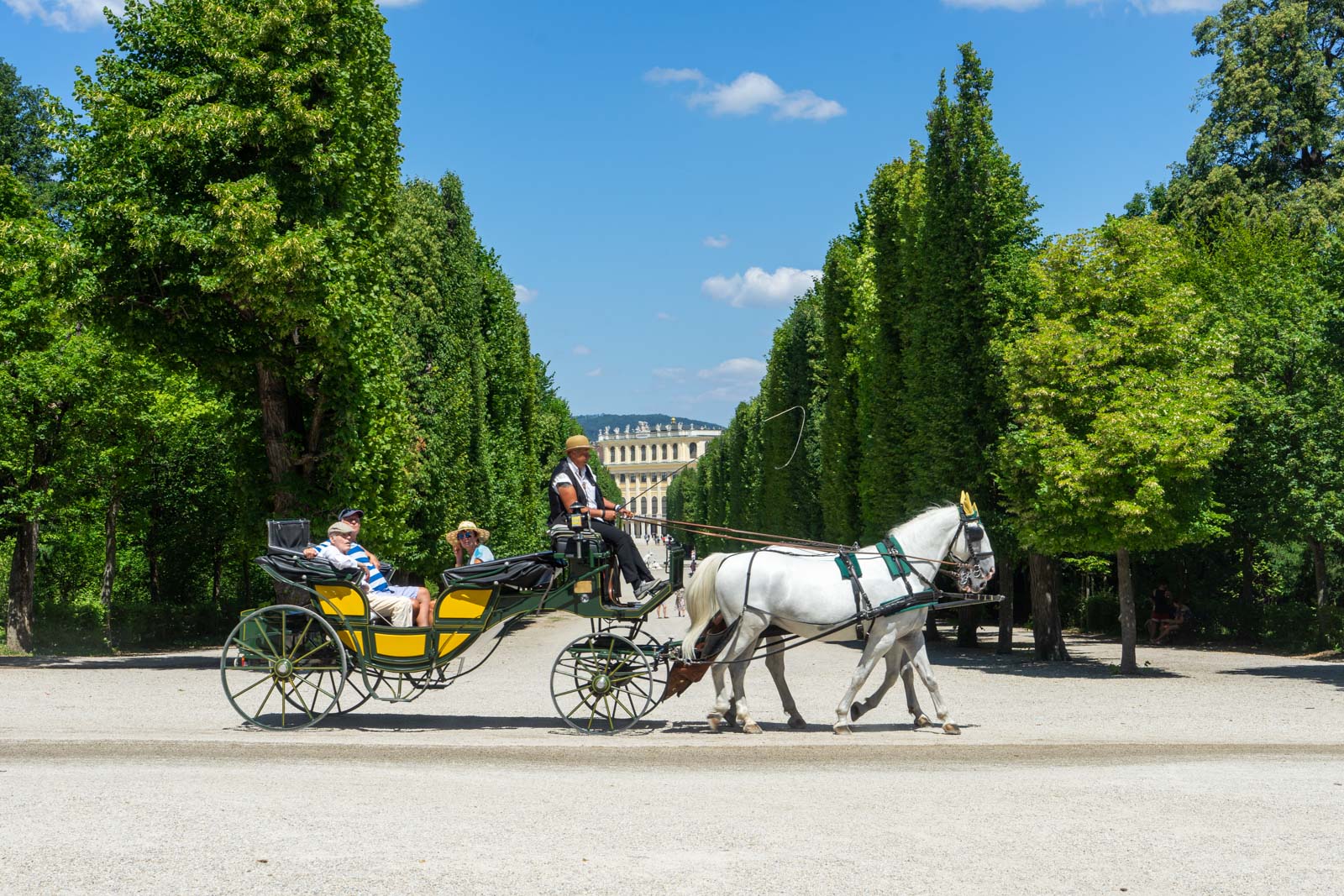 In my opinion, there is a very small difference in price between the three options. So my suggestion would be to just choose the one that you would most like to do, regardless of the cost.

I think the Imperial Tour is probably enough for most people, seeing as it includes a good range of rooms and the audioguide is quite comprehensive. But if you’re a bit more interested than the average person, why not pay €4 more to see a few more rooms.

And the same goes for the Schonbrunn Gardens area. The majority of the garden is free to enter and it’s unlikely you’ll have time to see it all. But if you want to pay just a small amount extra to see the really special bits, then it’s certainly worth getting the Classic Pass. (Or you can just pay the entrance to one of the garden attractions – but the cheapest is €4.50 anyway!) 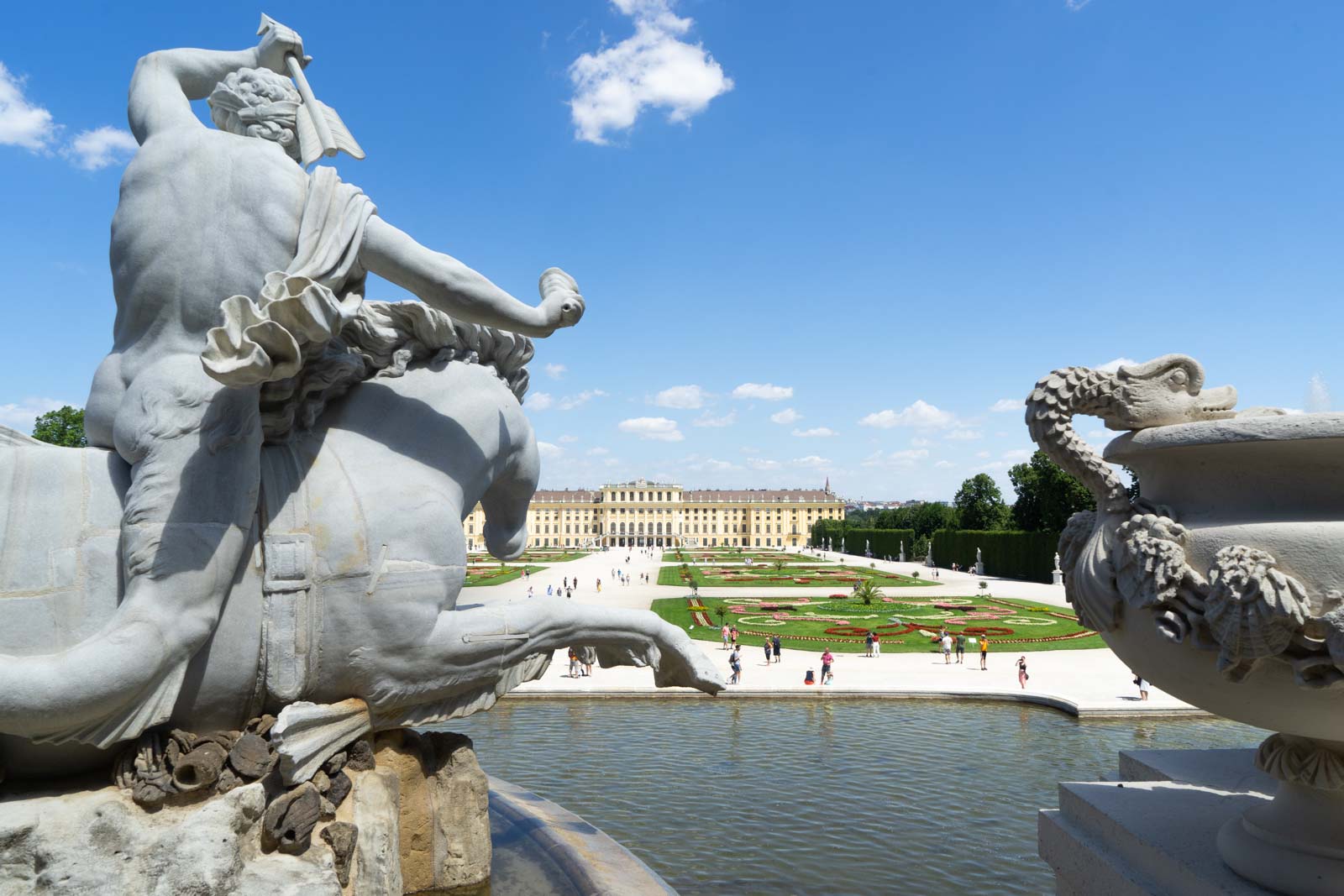 The only other piece of advice I would give is that there can be long waits to get into the palace – especially during peak tourist season. But when you buy your ticket, you’ll be given a time for your entrance and you can go and explore the garden until then. So make sure you buy your ticket straight away before going to the garden, so you know how long you’ll have.

If you’re short of time, there are some good ‘skip-the-line’ tickets you can buy that may well be worth the extra cost so you can make the most of your limited stay in Vienna. I would recommend this tour or any of these ones:

Regardless of how you choose to visit Schonbrunn Palace, I think it’s one of the best things to see in Vienna, so make sure you don’t miss it!