Things to see and do around Pafos, Cyprus

It’s the late afternoon and the temperature has dropped. Driving along the coastline here in the west of Cyprus, I have the window down and the breeze is pleasant.

In the passenger seat on the left, I’m able to stare out at the water and the sun, which are slowly getting closer to each other. There’s nothing but nature between me and the sea. I’m away from sealed roads, in a jeep on dirt tracks.

This is the best way to explore the Akamas Peninsula.

In my last story about Cyprus, I told you all about the World Heritage Site in Pafos and its ancient significance – as the origin of the Cult of Aphrodite, for the Roman trading city that developed, and with the incredible mosaics that have been preserved.

>> Read about the World Heritage Site in Pafos

For people interested in archaeology, Pafos is a terrific place to visit historical sites. Many tourists, though, think of the Cypriot city as primarily a beach destination. Well, it turns out it can be both – and more. 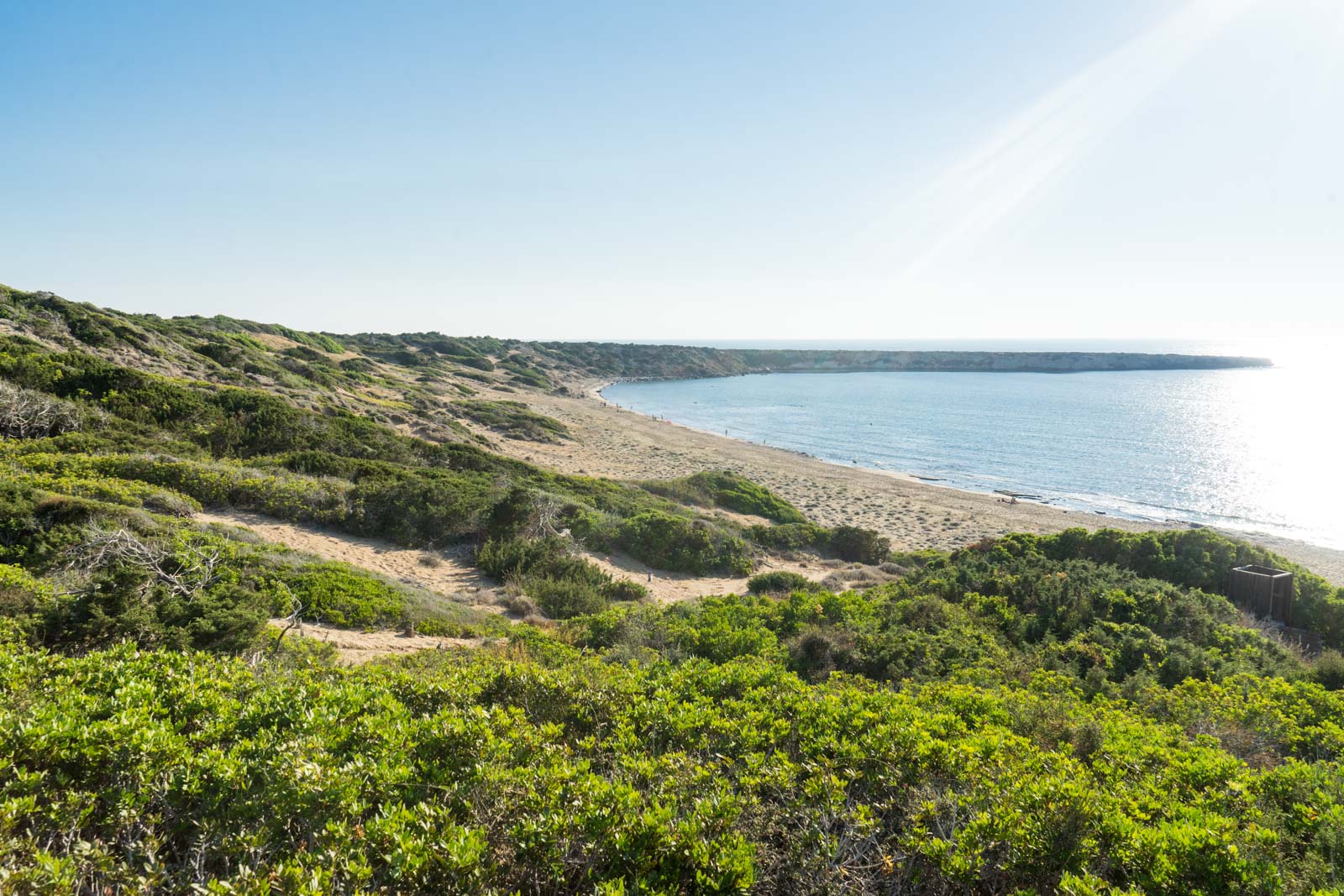 Pafos is also a great place to experience local culture and traverse some stunning landscapes, if you’re willing to venture into the area around the city. That’s how I’ve found myself in the Akamas Peninsula, on the way to a protected beach where turtles lay their eggs.

I’m going to run you through ten things to see and do around Pafos. To help you get an understanding of where they all are, I have put together this map for you.

It is useful (but not necessary) to have a car in Pafos. But if you want to explore the area around the city, you’ll definitely have to have one. I recommend booking with Holiday Auto, which normally finds the best deals. Once you’ve got wheels, you’re ready to discover!

The natural highlight near Pafos is the Akamas Peninsula, the large stretch of untouched land to the north of the city. It’s one of the most important natural preserves in all of Cyprus and it’s right on your doorstep here!

You need to go a bit cross-country to see Akamas properly. You could do some hiking or mountain biking but I think the best (and easiest) way is with one of the jeep tours. You’ll go past dramatic cliffs, across ravines, through, down to beaches, up hills and through forests. 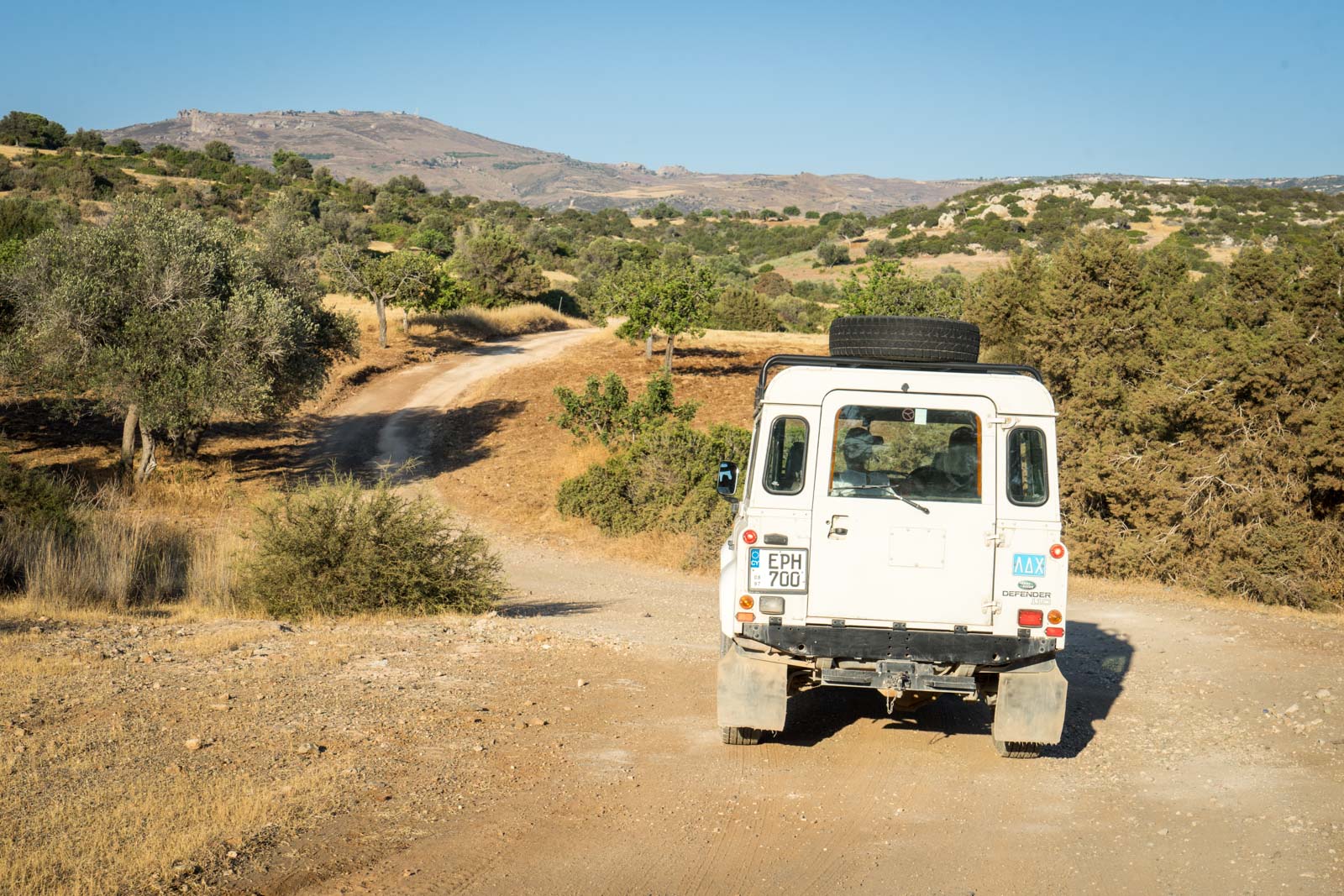 There are places to swim and you’ll also be able to see a project that is protecting the nests where turtles lay their eggs. Once you get further north, you will find yourself in some of the smaller villages which will give you a bit of insight into the traditional way of life here.

At the northern edge of the peninsula, you’ll find the Baths of Aphrodite.

The site is based around a small grotto where water flows out of a cliff. This is said to be the legendary place where Aphrodite would bathe herself and where she met her lover, Adonis. 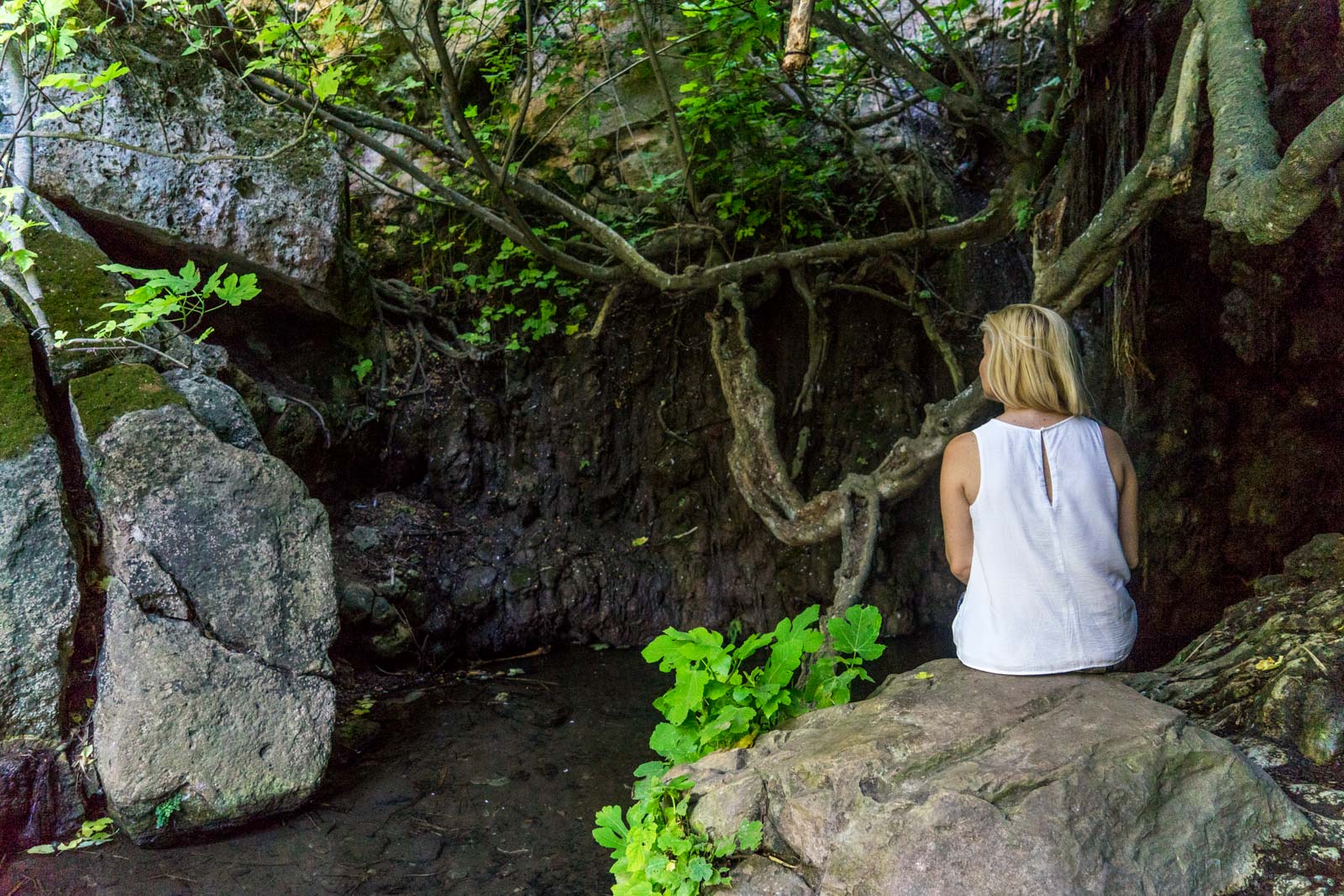 The grotto itself is more a tourist gimmick these days and probably isn’t worth the journey to see it alone. But the idea of the ‘Baths of Aphrodite’ is larger now than it used to be. The area also includes a botanical garden and hiking trails in the hills above the coast.

It’s also all accessible by highway from Pafos so it doesn’t take long to drive here and it’s an easy alternative to the Akamas Peninsula.

All around Cyprus, you’ll notice constant references to Aphrodite. Legend says that the Greek Goddess of Love was born here on Cyprus and so the locals use this story in their marketing as much as possible.

One the places now associated with her is the ‘Birthplace of Aphrodite’, about 25 kilometres east along the coast. The narrative around the site is that it’s where the deity arrived on a seashell after she was created amongst foam in the sea. There’s no direct reason why this should be identified as the place where she arrived, but it is a beautiful spot along the coast with an enormous rock sticking up from the edge of the beach.

For most visitors, it’s just a lovely spot to have a swim or a picnic and enjoy some time on the sand away from the city.

I have covered the main archaeological sites in my previous story about the World Heritage Site in Pafos but there are some smaller ones scattered around the city. One that is quite interesting is at Lemba.

Here you can see the excavations of houses that would have been built at least 4000 years ago. Obviously there’s not too much left these days but the archaeologists have built replicas next to the original locations.

These were built using the methods the ancient people probably would have used, as a test to see exactly how the construction could have been done. Lemba is on the way to the Akamas Peninsula and so it is quite easy to quickly stop and have a look on your way.

You can find another insight into the history of Pafos at this folk art museum just out of the town.

It focuses on the period in the 19th and 20th century when this part of Cyprus was still very traditional. The displays inside the old house show tools used for traditional jobs like agriculture and shoe-making.

There are also household items and examples of art that was being produced on the island, including pottery and lace. The museum is quite small and understated but has a good variety of exhibitions. It is on the way to some other interesting sights and could be worth popping into on your way past.

Of course, Pafos has more than just old culture. For an interesting dive into the modern arts scene, it’s worth stopping into The Place, which is not too far from the Geroskipou Folk Art Museum.

It’s an arts centre that about a dozen small studios where regular artists come in to work. You may see people working on pottery, glass, mosaics or wood carvings. 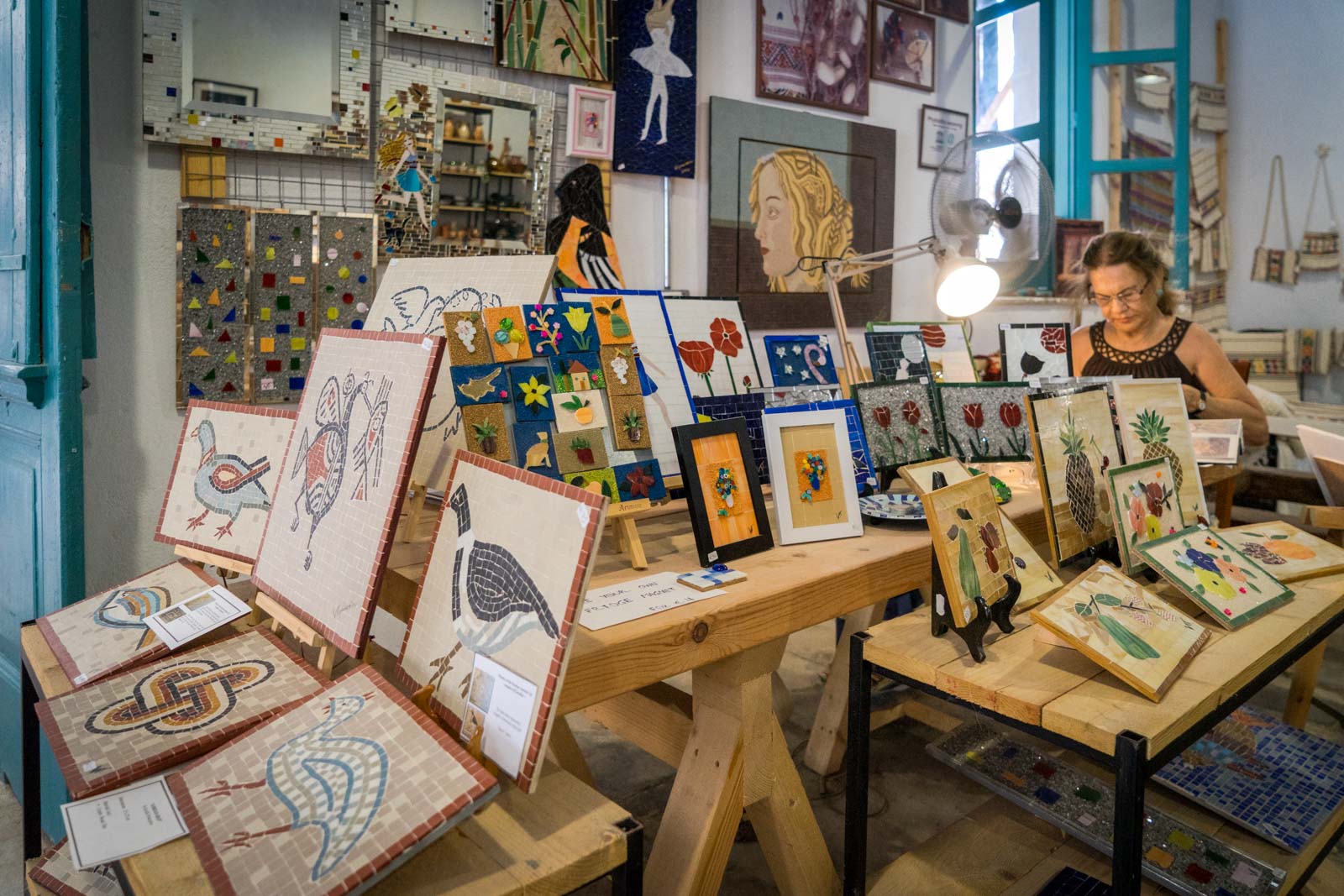 There are handmade pieces for sale and also the opportunity to try some of the crafts for yourself. I found that most of the artists were really chatty and it’s a fun way to meet some locals and learn a bit more about Pafos.

You can discover a lot about a culture from its food. One of the local specialties here is haloumi and you can learn how to make it direct from one of the local producers.

Sofia makes the cheese on the terrace of her house in the hills above Pafos. Residents in the area come directly to her to buy the haloumi because they know it will be fresh and organic. 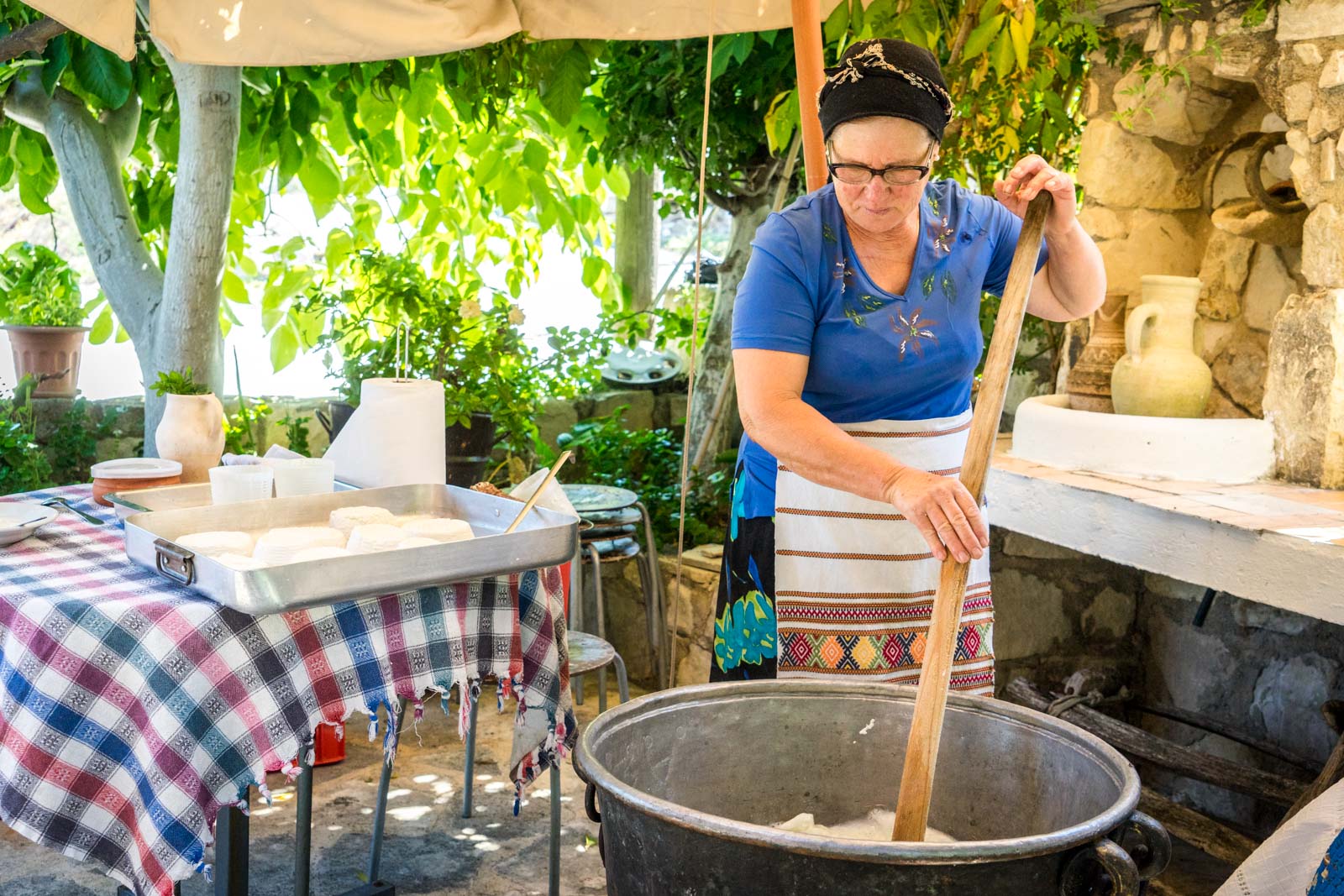 With a constant smile, she shows me how it’s done and then serves up a large plate with a few things to taste. We also make some traditional bread and brew up a coffee the Cypriot way. You really can’t get more local than this.

Another local delicacy is called ‘loukoumi’. It is basically what you may know as ‘Turkish delight’… except you wouldn’t dare call it that here. Loukoumi is soft and sweet, which is no great surprise when you consider it’s just made from water, sugar and starch. 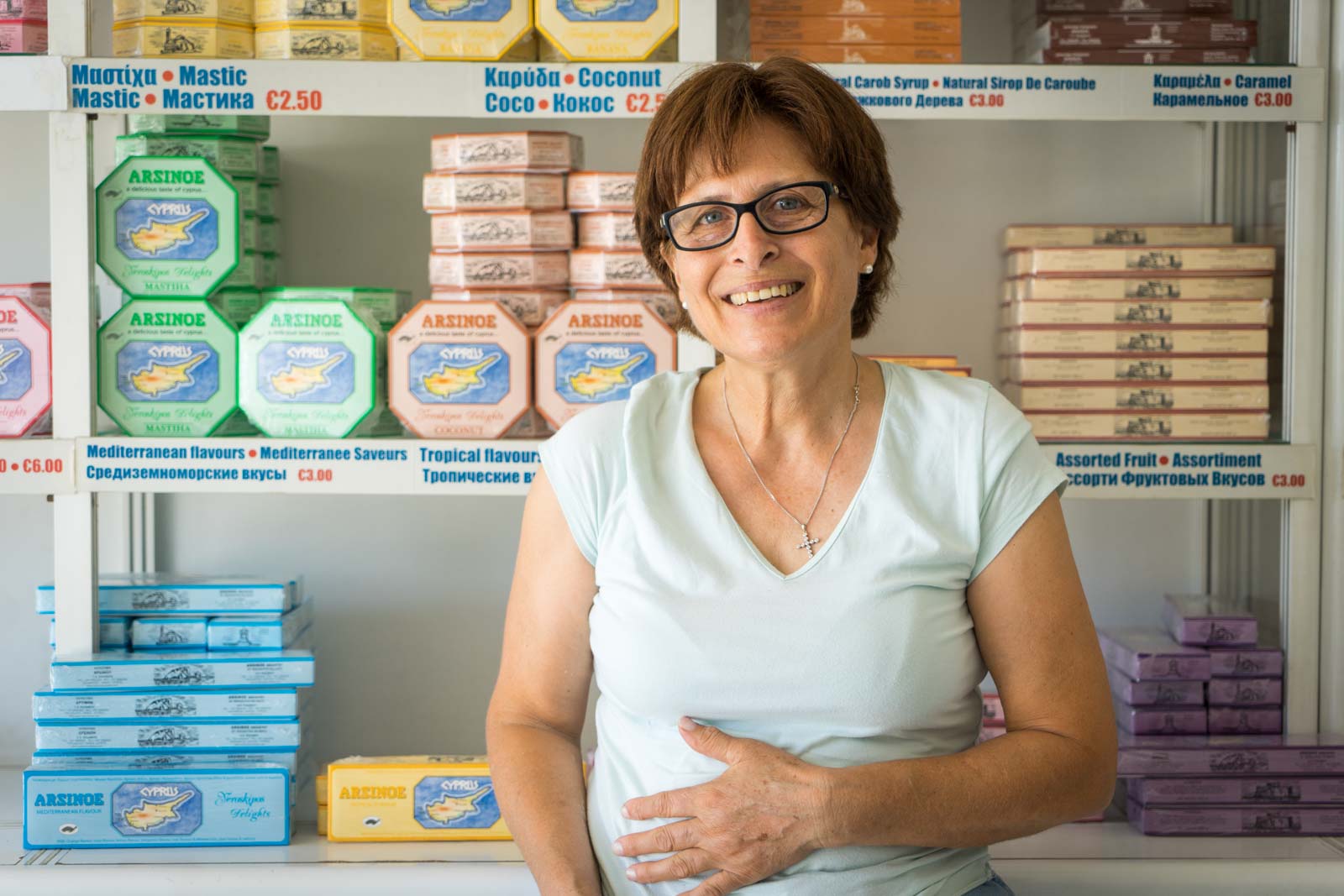 There are a few small sweet factories that you can visit and see the process for yourself. These are family-run businesses where the loukoumi is effectively made in a shed out back and the front is the shop.

There are different flavours on offer so you can try them and then choose you favourite.

When it comes to European wines, you may not think of Cyprus as quickly as you think of countries like France or Italy. However, the wine scene here is actually quite complex and there are some very interesting drops being produced.

Around Pafos, there are quite a few wineries and there are even a couple of wine routes that have been developed to help guide visitors through what is on offer. You’ll find that most of the wines are made from local grape varieties, so I found it quite interesting to try tastes I hadn’t had before. Most of the wineries offer tastings and the cost of a bottle is very reasonable. Make sure you leave some room in your luggage to take a few home with you.

Like any coastal tourist city, there are some great bars that you can hang out at in the evening – and after a busy day of exploring the region, you will have earned it.

The sunsets in Cyprus are quite spectacular so if you can find one with a view west, you’re in for a real treat.

I would recommend heading out to Bar Oniro one evening. Not only is it a very pleasant spot with some lovely coastline, but it has an extra special attraction – a shipwreck. 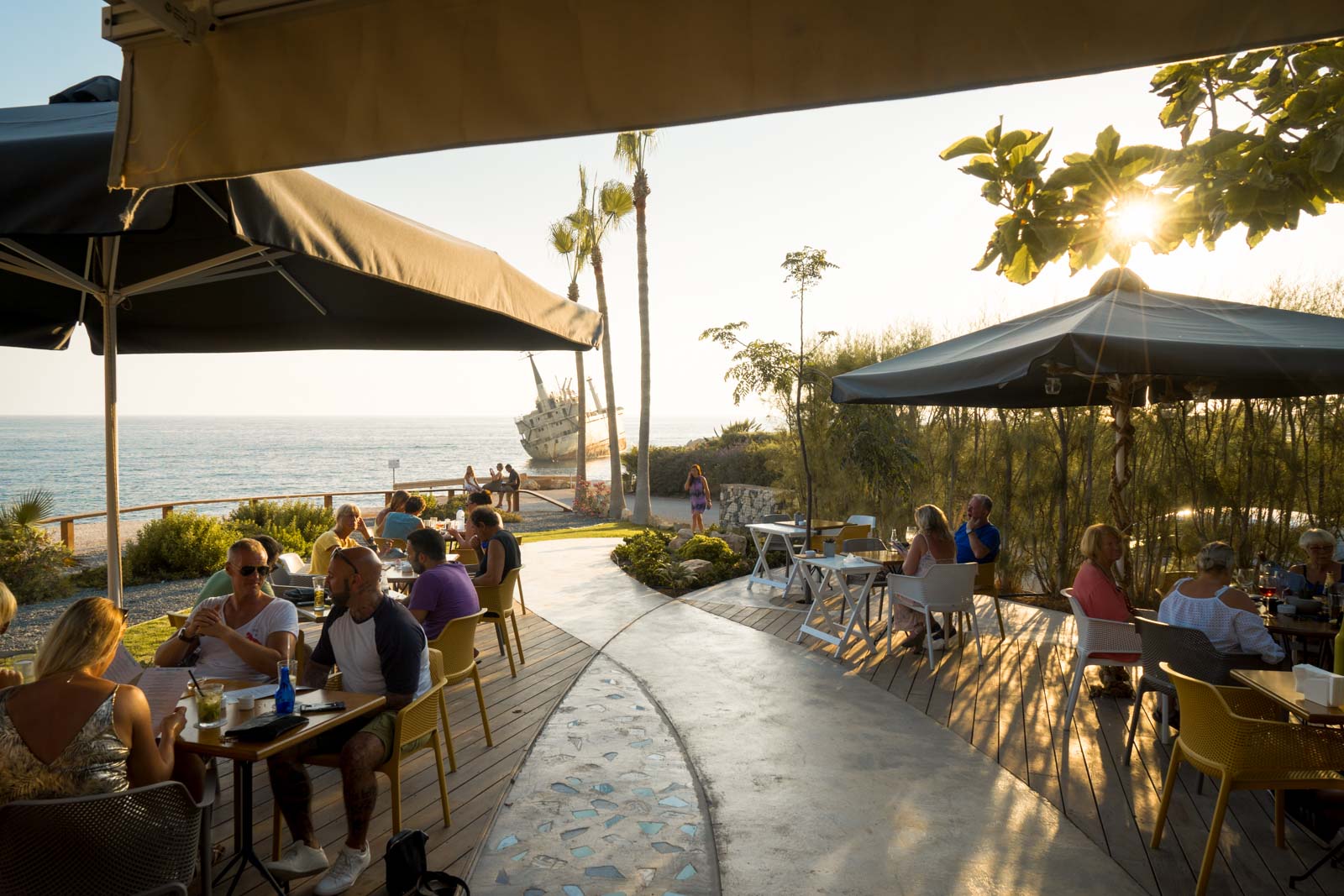 The ship, the Edbro III, ran aground in December 2011. It is still in the same spot and is perfectly silhouetted by the sunset each day.

>> Need to rent a car? Best deals in Cyprus here

Where should you stay in Pafos?

If you’re looking for a budget option, 777 Beach Guesthouse has dorm beds available.
A very reasonably-priced option with good space is Valentino’s Court.
One of the nicest 5 star hotels in a great location is the Annabelle Hotel.
And the nearby Almyra is a beautiful design hotel by the beach.

Time Travel Turtle was supported by the Cyprus Tourism Organisation but the opinions, over-written descriptions and bad jokes are his own.