In bookstores across North Korea, there’s quite a collection of literature for sale. The musings of Kim Il Sung seem to be quite a popular set of books. Kim Jong Il shares some pearls of wisdom in a few volumes as well.

And then there’s everybody’s favourite paperback: “The US Imperialists started the Korean War”. 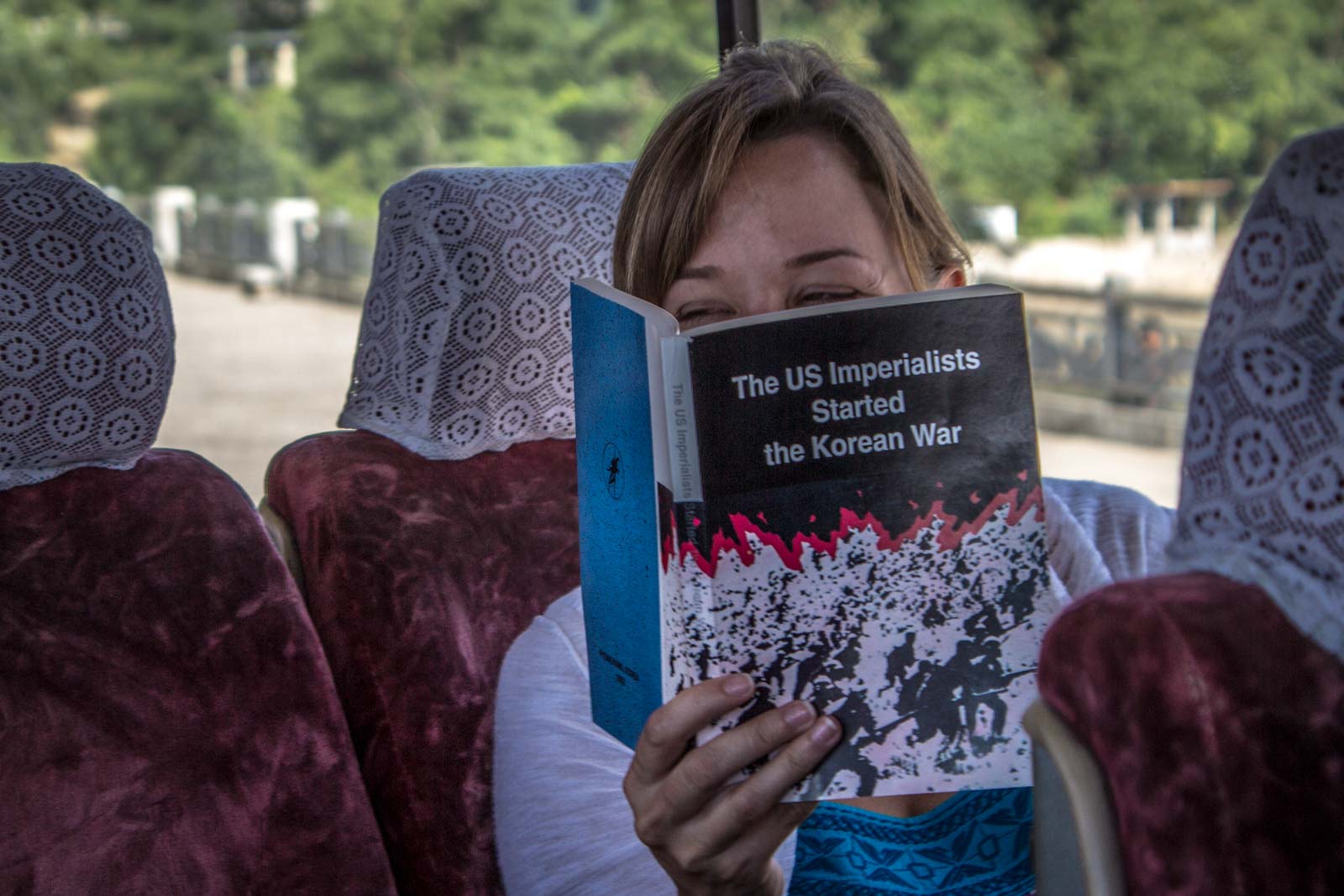 It’s a title that’s about as subtle as it is accurate and pretty much sums up the propaganda that is served up daily to locals and tourists in North Korea.

This isn’t just a whitewash of history – it’s a full white laundry service with some drycleaning thrown in as well.

Again and again during our tour of the country, we’re told how the United States and their South Korean ‘puppet government’ ruthlessly invaded the north in 1950 for a variety of evil reasons – including to get the US out of recession (try and figure that one out?). Of course, for the rest of the world, history tells us that it was in fact Kim Il Sung who invaded the south after getting permission from Josef Stalin.

His army had a successful advance until the US and the UN fought back, pushing the communist troops far back into the northern territory before a counter-attack left both sides pretty much where they began, and with about 2 million people dead.

At the ‘Victorious Fatherland Liberation War Museum’ this is described as a ‘strategic retreat’ by North Korea. The subsequent armistice agreement is presented as a surrender by America and its allies, and we’re proudly told this is the first time the US have flown the white flag in this way. 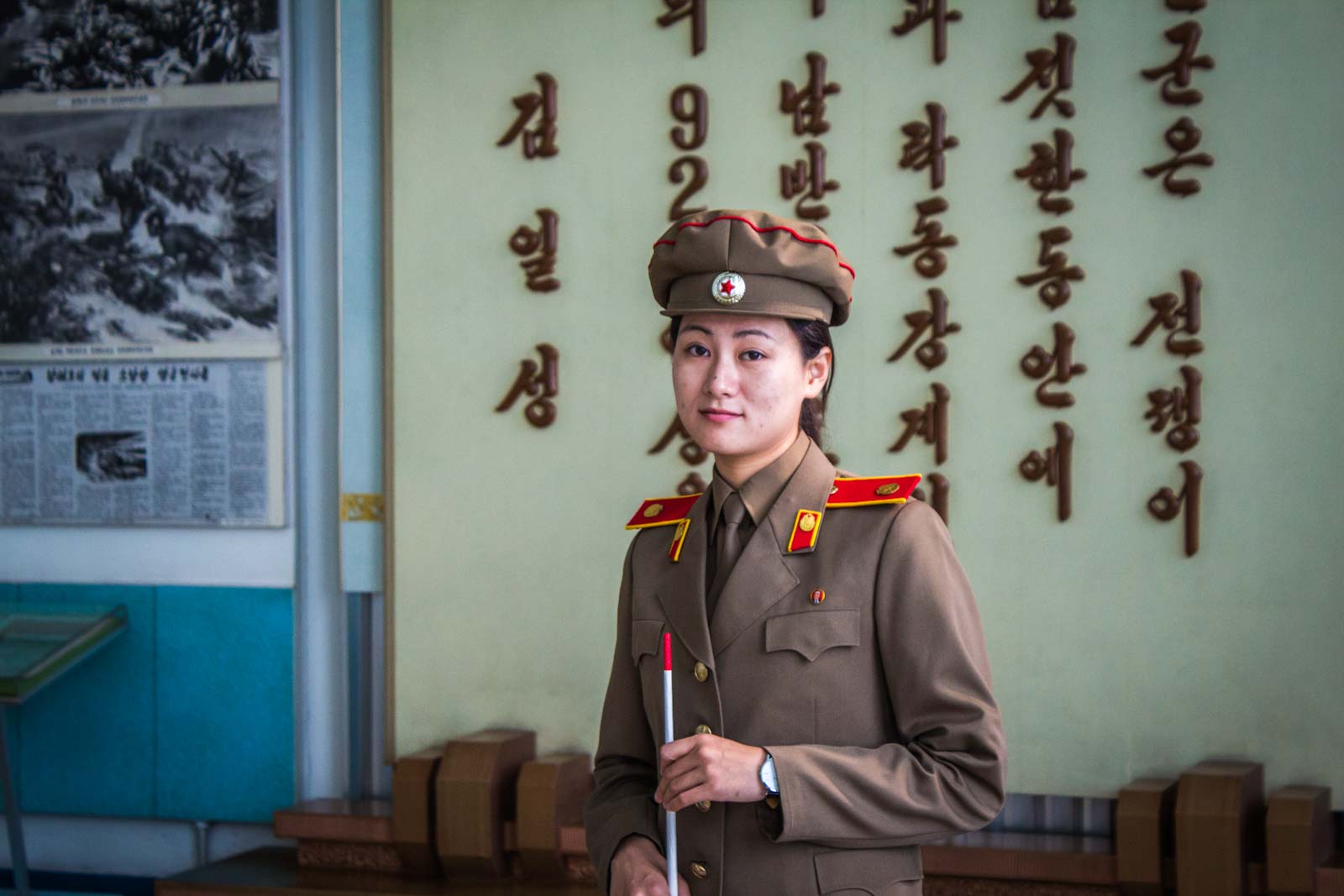 Life as a North Korean

The whole experience of being fed propaganda is quite amusing for foreigners and we’re lucky because we can leave the country and read about the truth.

Think for a moment, though, what it’s like to be a North Korean and only ever hear one version of history, to have these stories blasted by loudspeaker into the fields while you work (something we heard a few times) and to never see a single page of the internet to have a chance to do your own research.

>> Read my story about life in North Korea 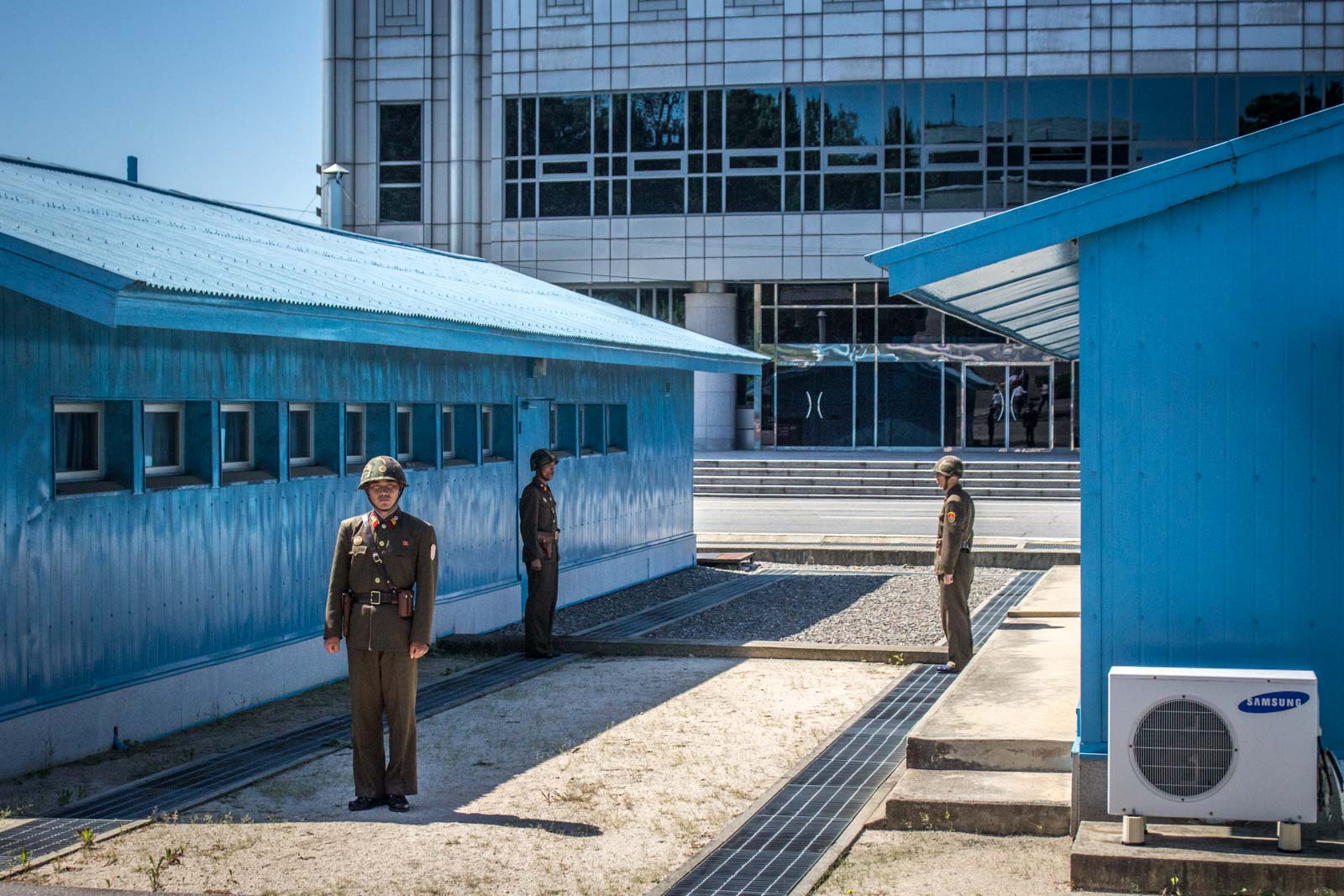 It’s with this brainwashing of the populace that Kim Il Sung and now his son, Kim Jong Il, control their people and raise themselves to the status of deities.

There is no religion in North Korea – it’s the leaders who are worshipped every day, and they cement their position by portraying the US and their allies as ‘bogeymen’ who are trying to destroy the fatherland. Everything from famines and floods have been blamed on the West. 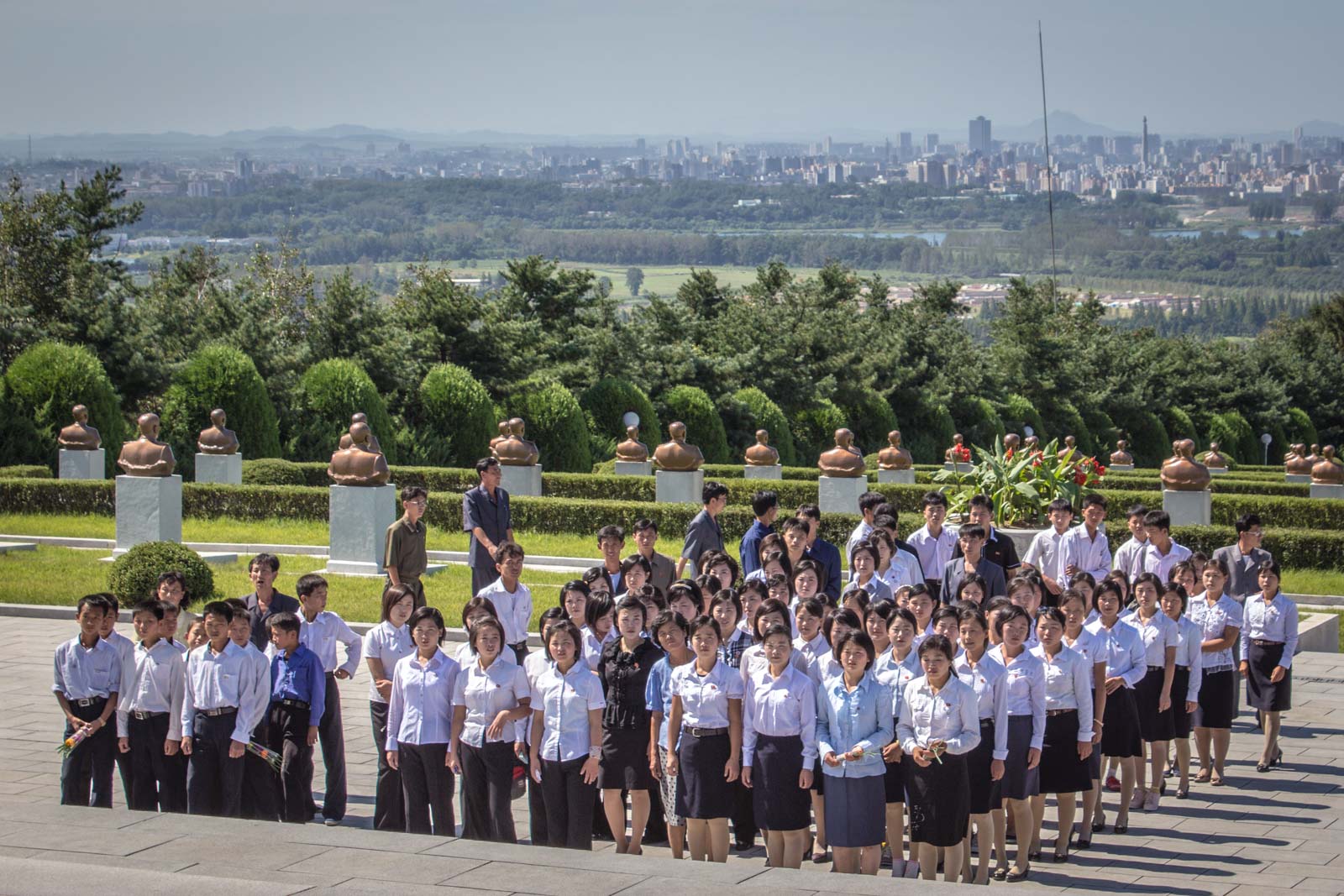 Kim Il Sung died in 1994 but on a visit to North Korea you still get the sense he is controlling the country. He is still technically the President, which in a weird kind of way makes him the longest-serving head of state in the world. (Kim Jong Il is only referred to as ‘Dear Leader’, never as ‘President’.)

Across Pyongyang and through the countryside there are large statues and monuments dedicated to Kim Il Sung. 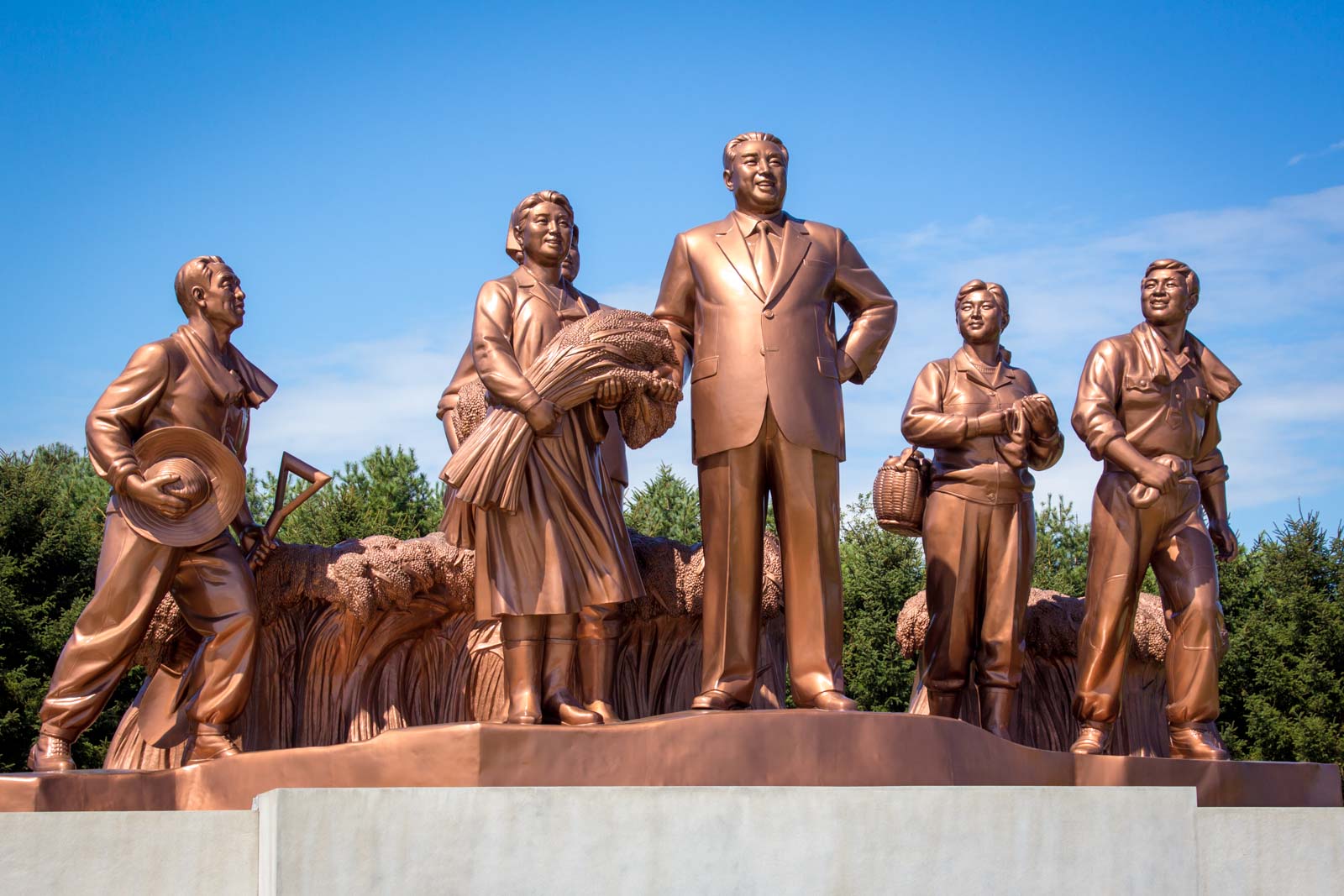 One of the most bizarre experiences we had (and there were many) was a visit to the Memorial Palace in Pyongyang to see the body of Kim Il Sung.

This is a very solemn place for the locals and we were joined by large groups of them, streaming in to pay their respects. Dressed in shirts and ties, we joined them on the hundreds of metres of moving walkways that transported us from the security check to the centre of the monument.

Then, in rows of four, we entered a room the size of a school gymnasium, empty except for large white marble columns on either side and a massive white statue of Kim Il Sung at the far end.

From hidden speakers, dramatic (and presumably inspiring) music blared out as we marched across the deserted room, stopped, bowed to the statue, paused for a moment of quite reflection, tried hard not to giggle, and then followed the direction of a North Korean guard out of the room.

>> My full story about visiting North Korea is here 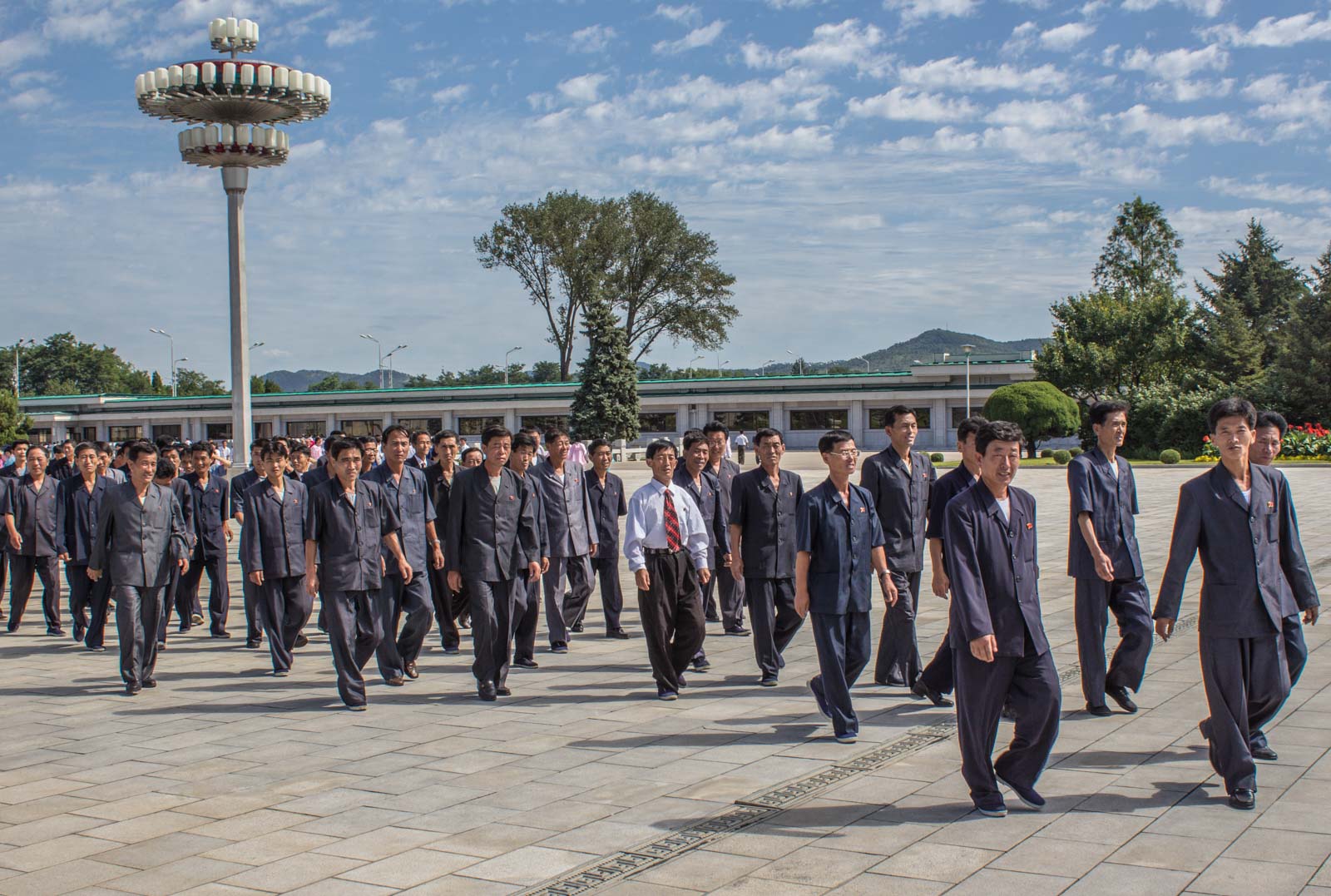 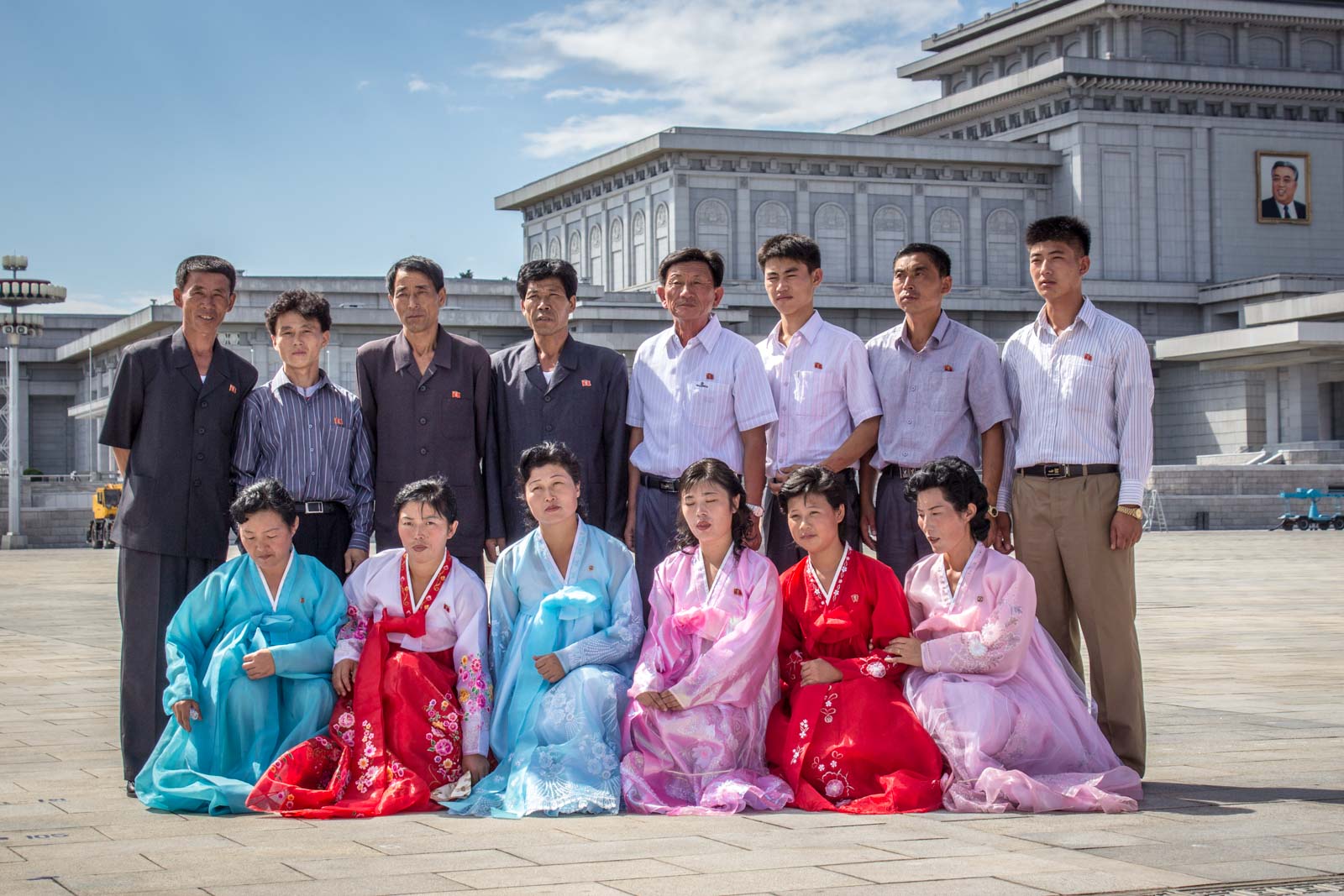 In the next room with a large mosaic on the wall, we listened to a short audioguide that described how Kim Il Sung’s death led to ten days of mourning and the people’s tears fell to the ground and fossilised as crystals.

All the world cried for The Great Leader and sent their condolences (although the guide failed the mention that South Korea sent no message and that actually put back peace talks by quite a few years!).

Finally we went into the room with the body of the President and joined the locals in bowing three times as we walked around the memorial. You do get the feeling in North Korea that there is genuine love for Kim Il Sung. After all, he was the man who saved the people from the Japanese, fought off the US imperialist aggressors and invested a lot in healthcare, education and infrastructure (we just won’t mention the executions, labour camps and poverty).

Now, though, Kim Jong Il may have consolidated his power but you get the feeling he’s still got some work to do to earn the love of the people.

In Pyongyang and at sites across the countryside, there are large posters and mosaics of the Dear Leader looking happy and cheerful in front of important landmarks.

State television shows pictures of him almost everyday visiting a photogenic location (one morning we saw photos of him visiting a kebab shop which, with his trademark sunglasses, made it look more like he was on his way home from a big night). 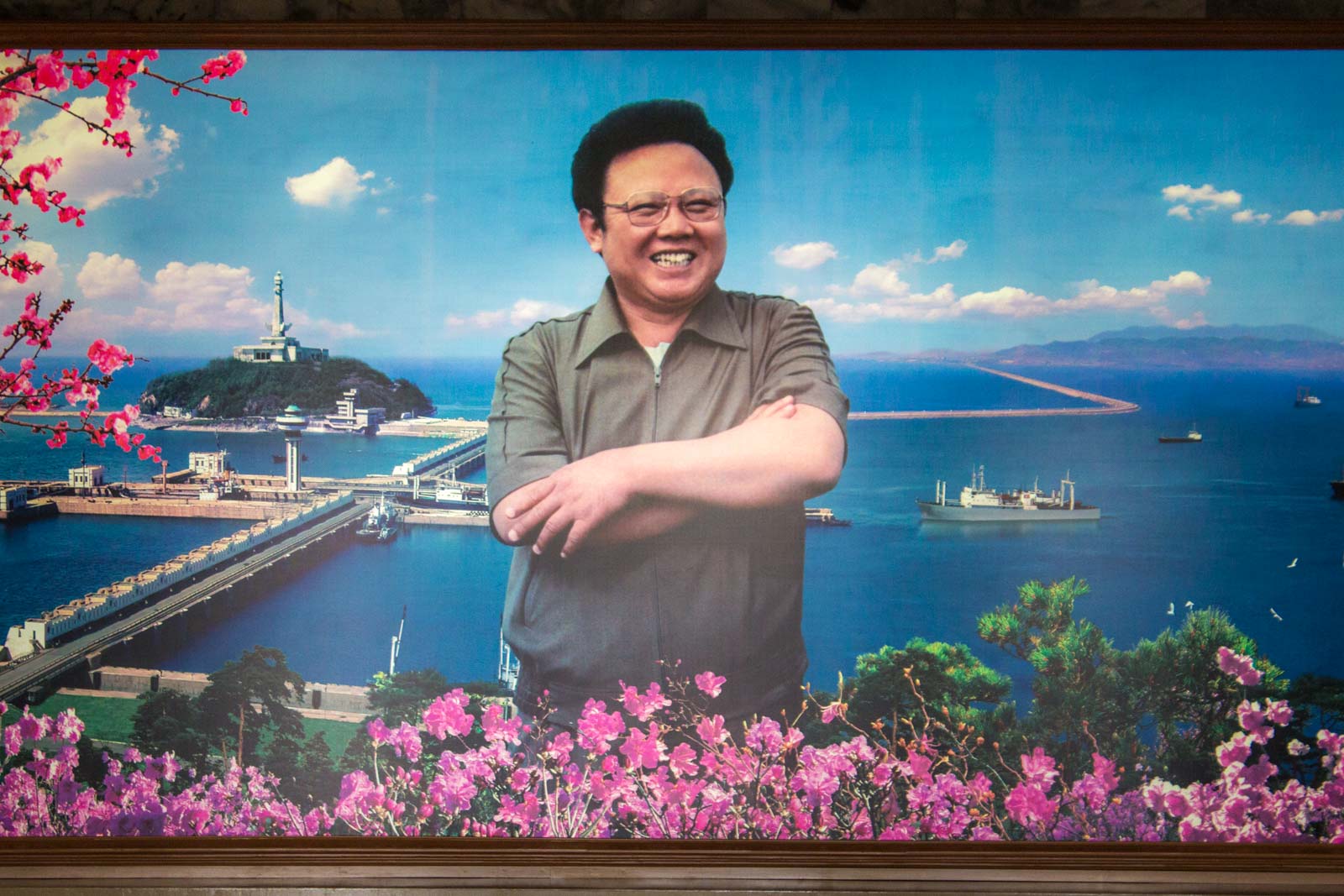 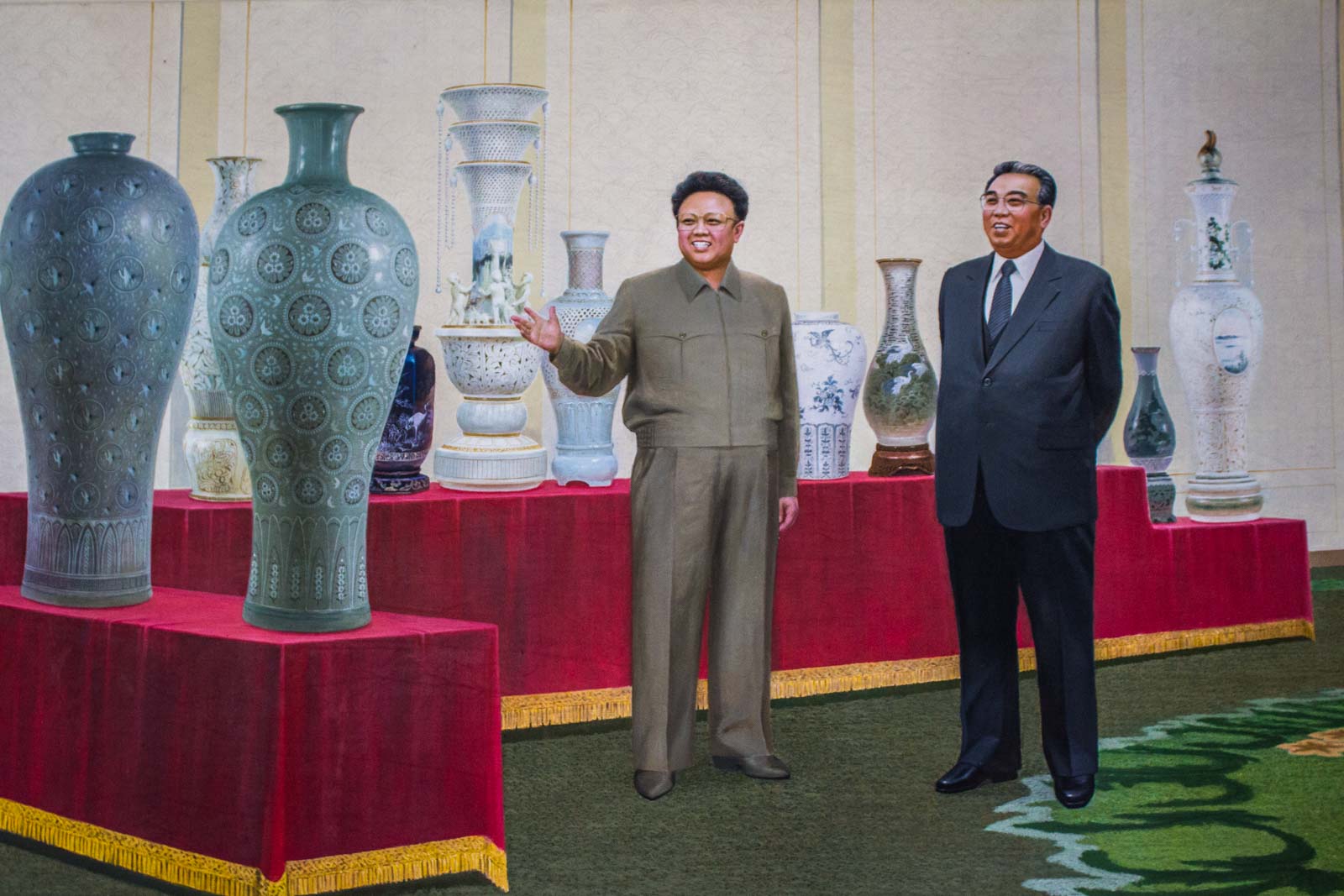 Still, the myth of the Kims remains and the general public don’t question it. For example, they don’t know where Kim Jong Il lives (and they don’t hear the rumours about his rollercoaster, tiger zoo or collection of cars).

They don’t know that he has three sons – only one has been officially introduced to the North Koreans.

On the way to the Mass Games in Pyongyang, someone in our tour asked about the performance’s narrative and was told by our guide “Kim Jong Il personally wrote the whole story himself”. A rather surreal experience was visiting the ‘International Friendship Exhibition’. Essentially this is a huge collection of rooms that house all the presents given to the Kims – apparently more than 200,000 of them in total.

The highlights are the stuffed crocodile standing up holding a tray of cups from Nicaragua and the armoured car from Stalin.

After his father’s death, Kim Jong Il built a separate area just for his gifts. It’s a massive space which tunnels deep into a mountain. The entrance is large and imposing with two guards either side of an over-sized bronze door that’s opened by machinery.

Inside he has gifts from other illustrious leaders like Fidel Castro, Robert Mugabe, Yasser Arafat and Vladimir Putin (you wonder if there’s a club where these guys can go to smoke Cuban cigars and share stories).

In the main room, underneath a huge white statue of Kim Jong Il, you can also see the ashtray Jimmy Carter gave him or the basketball from Madeleine Albright. 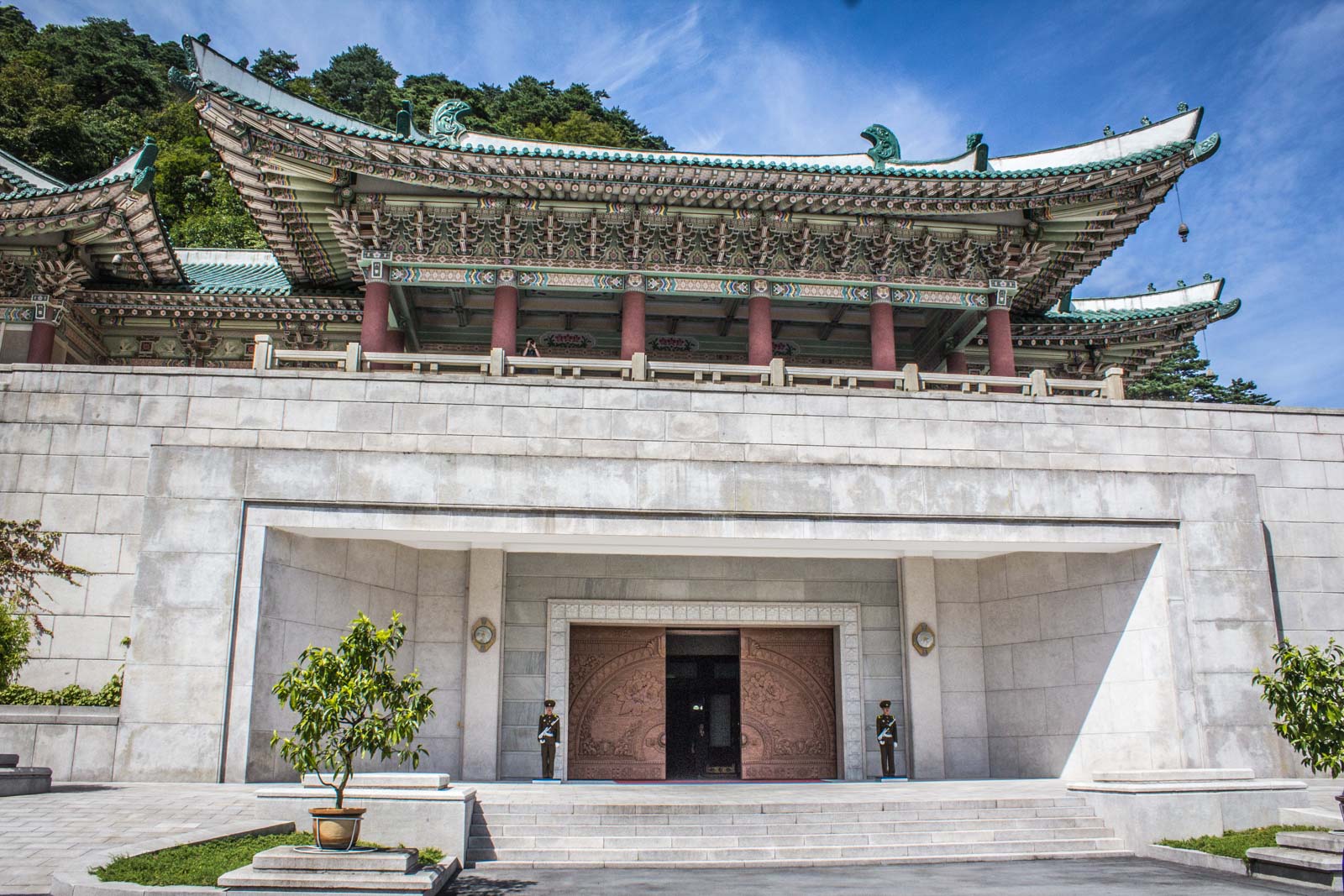 The size, the grandeur and the immodesty of these exhibitions are all part of a concerted campaign across the country to maintain order and control through a shrewdly-coerced sense of respect for the leaders of North Korea. The presentation of the gifts make Kim Jong Il and Kim Il Sung look loved by the international community.

In the same way, education from a young age makes that same international community look like evil aggressors, which the isolationist state needs protection from.

To us, as foreign observers, none of this seemed very subtle. As a North Korean, if you know no other alternative version of history or current affairs, that’s just the way the world is. 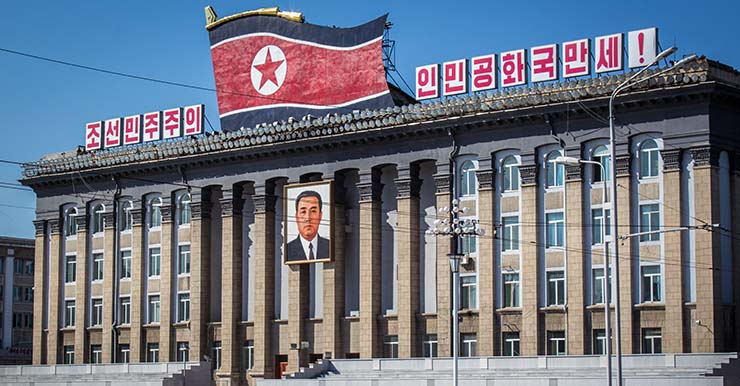