Settling into my room for the next four days, I look at the window – one last glance at Darwin before setting off in the vastness of the middle of Australia.

I’m starting to arrange the things from my bag when the speaker near the ceiling springs to life.

“…being on board a moving train can take some getting used to. Please be aware trains can be subject to sudden movements…”

The safety briefing is short and is soon replaced by some information about what lies ahead. My room lurches slightly and then the landscape starts to move.

The faint sounds of the track beneath me seep up from the floor. I’m excited about the adventure ahead. 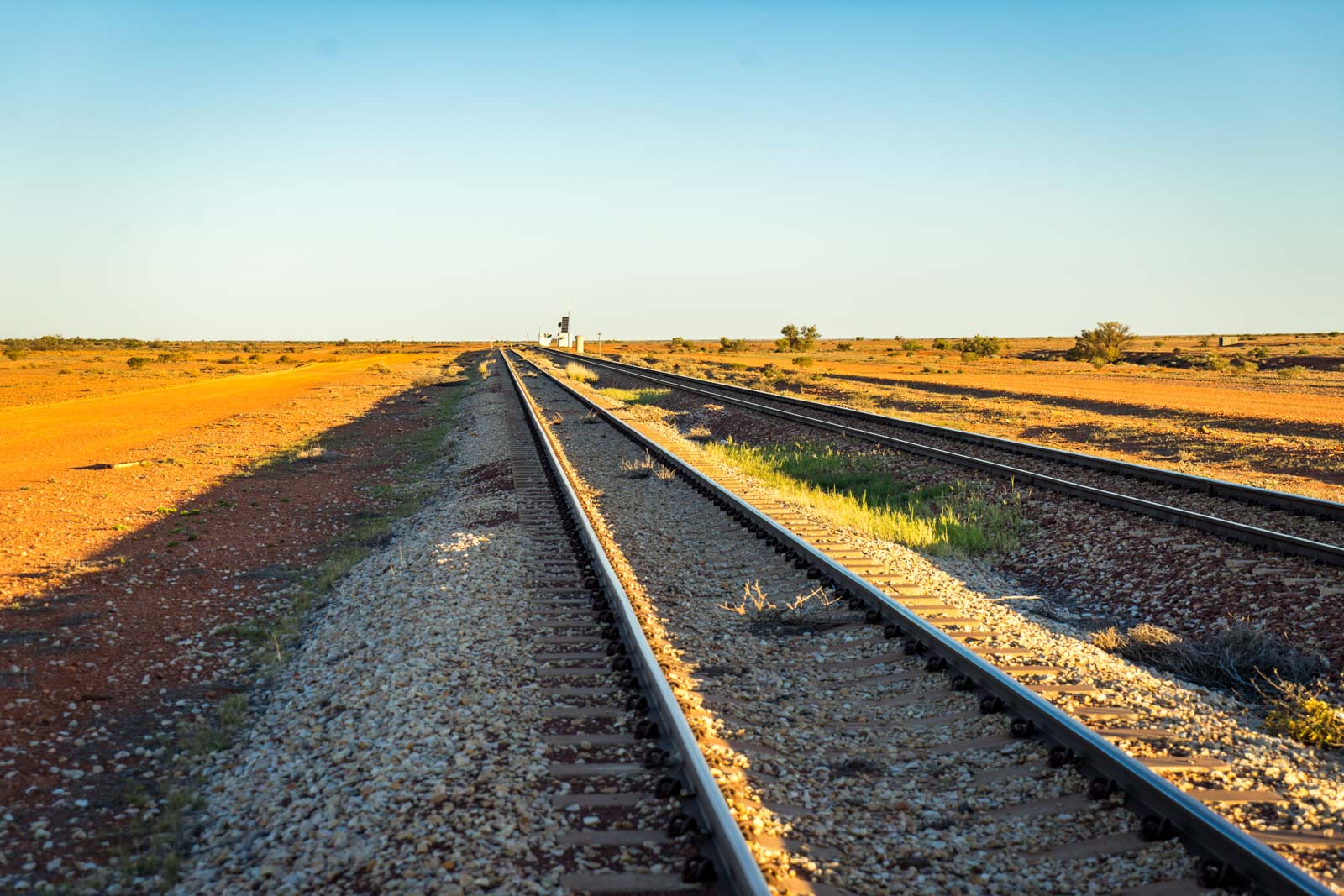 I am on board The Ghan, one of the most iconic trains in the world. It travels between two Australian cities, Darwin and Adelaide, along a 3000 kilometre stretch of track, connecting the top of the country to the bottom.

In between is some of the harshest landscapes on the planet, filled with natural beauty and fascinating culture.

The route roughly follows the trails used in the early pioneering days of the country more than 150 years ago. These explorers took camels with them as they set out into the centre of Australia because the animals were more suitable for the extreme conditions.

These camels were said to be driven by men from Afghanistan (although they could have been from Pakistan), hence the name of the train. 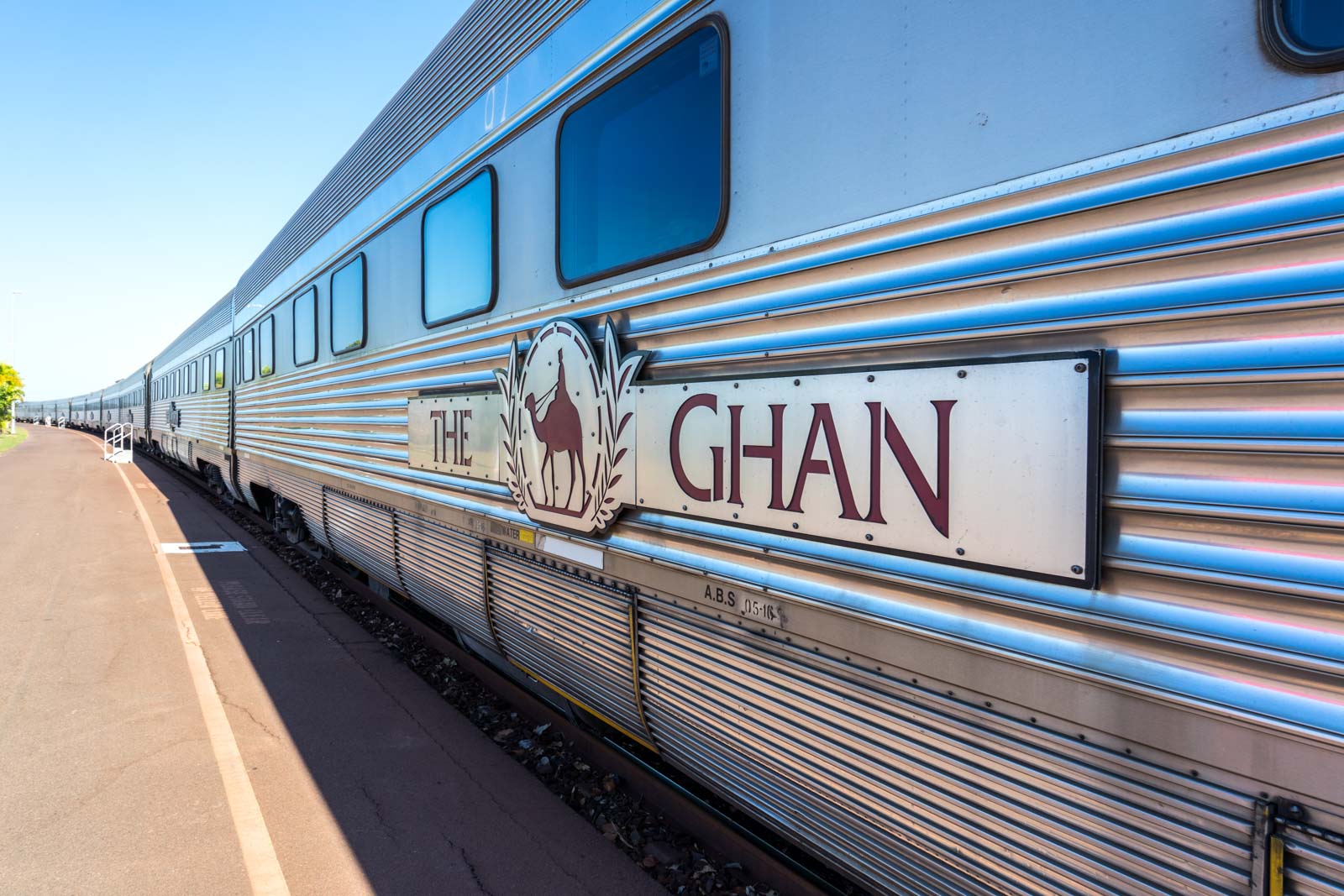 These days things are a bit more luxurious but that doesn’t mean the sense of exploration is gone. Not long after the train leaves Darwin, one of the staff, Kai, arrives in my cabin to talk about activities.

What is The Ghan Expedition?

The trip I’m taking is called ‘The Ghan Expedition’, which is a three night and four day journey (as opposed to the normal trip which is two nights and three days).

The extra day has been added to give passengers more time to do excursions off the train and see as much of Central Australia as possible. 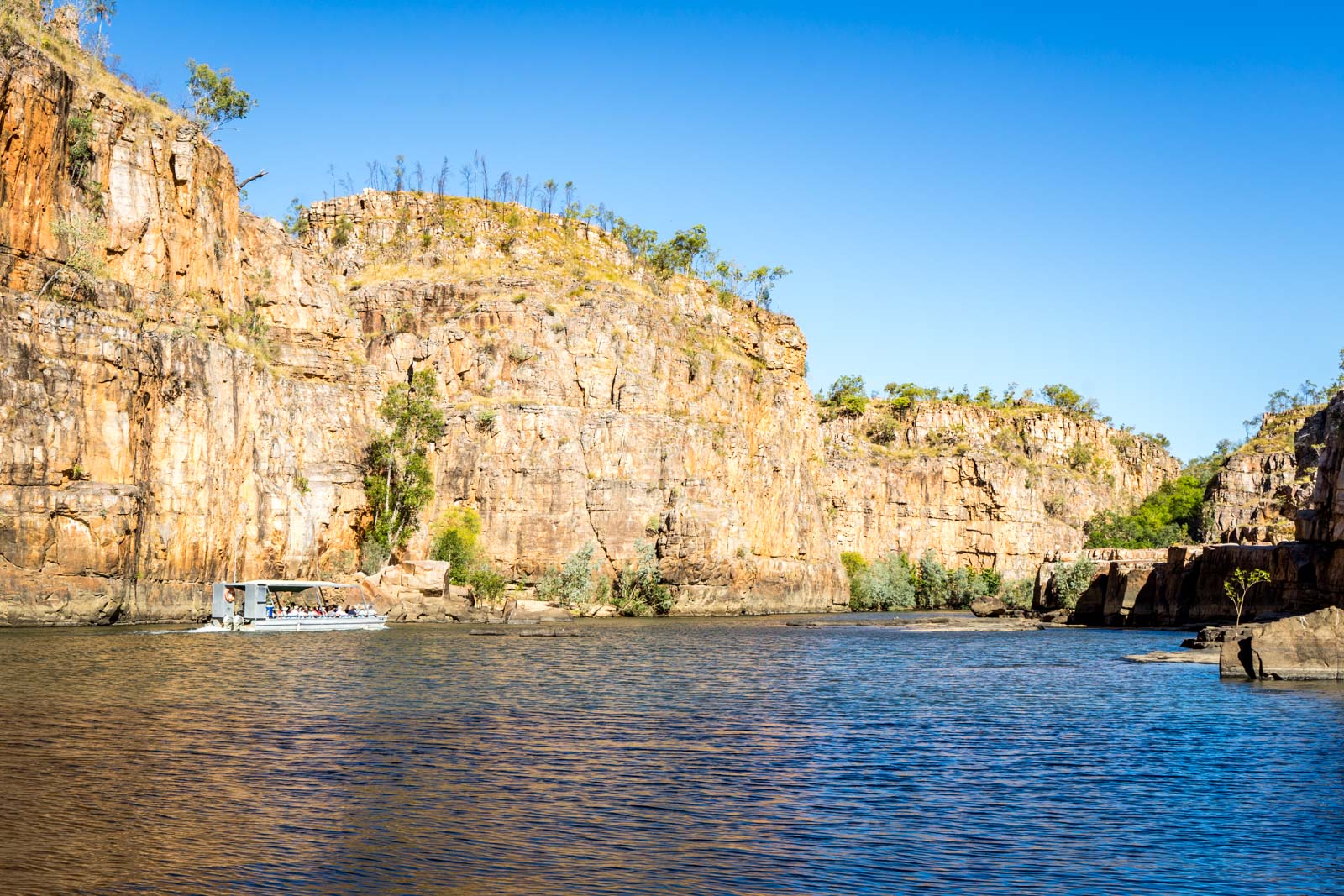 Kai explains one of the options for this afternoon when we reach Katherine.

I choose the cruise of Nitmiluk Gorge, a stunning natural wonder with a strong link to the local indigenous culture.

The cruise is actually in two parts, through different parts of the gorge. In between, we get off the boats and walk across the rocks. 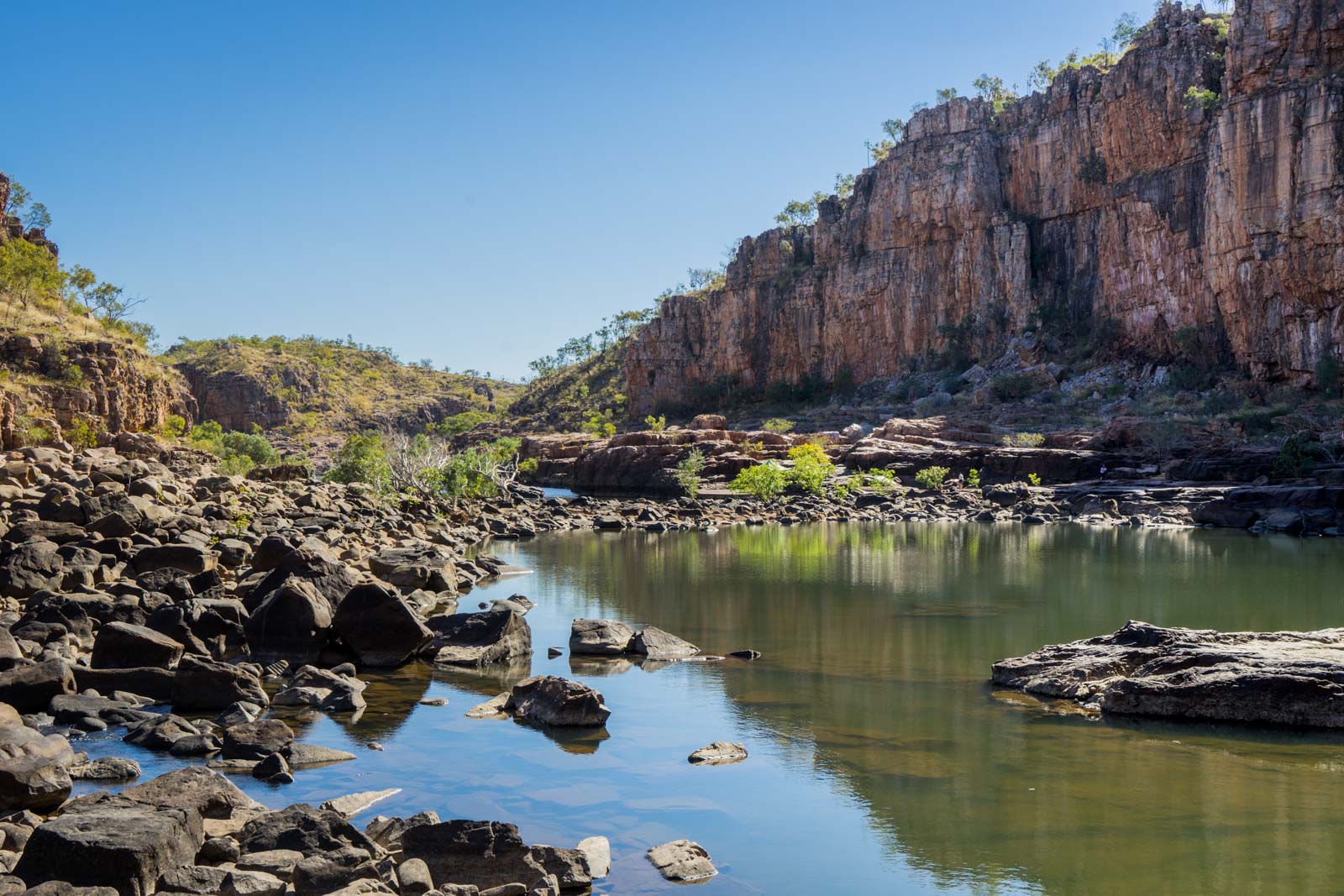 I have written a bit about the excursions that I did during the stops on The Ghan Expedition. There’s plenty to tell about these experiences in remote Central Australia. If you’re interested, feel free to have a look at any of the following:

>> A boat ride on Nitmiluk Gorge

Dining on The Ghan

Back on board after the excursion, it’s time for the first dinner. There are several restaurant carriages spread along the 750 metre length of the train.

I head to mine a little early so I can have a drink in the lounge before the dining time I’ve requested. 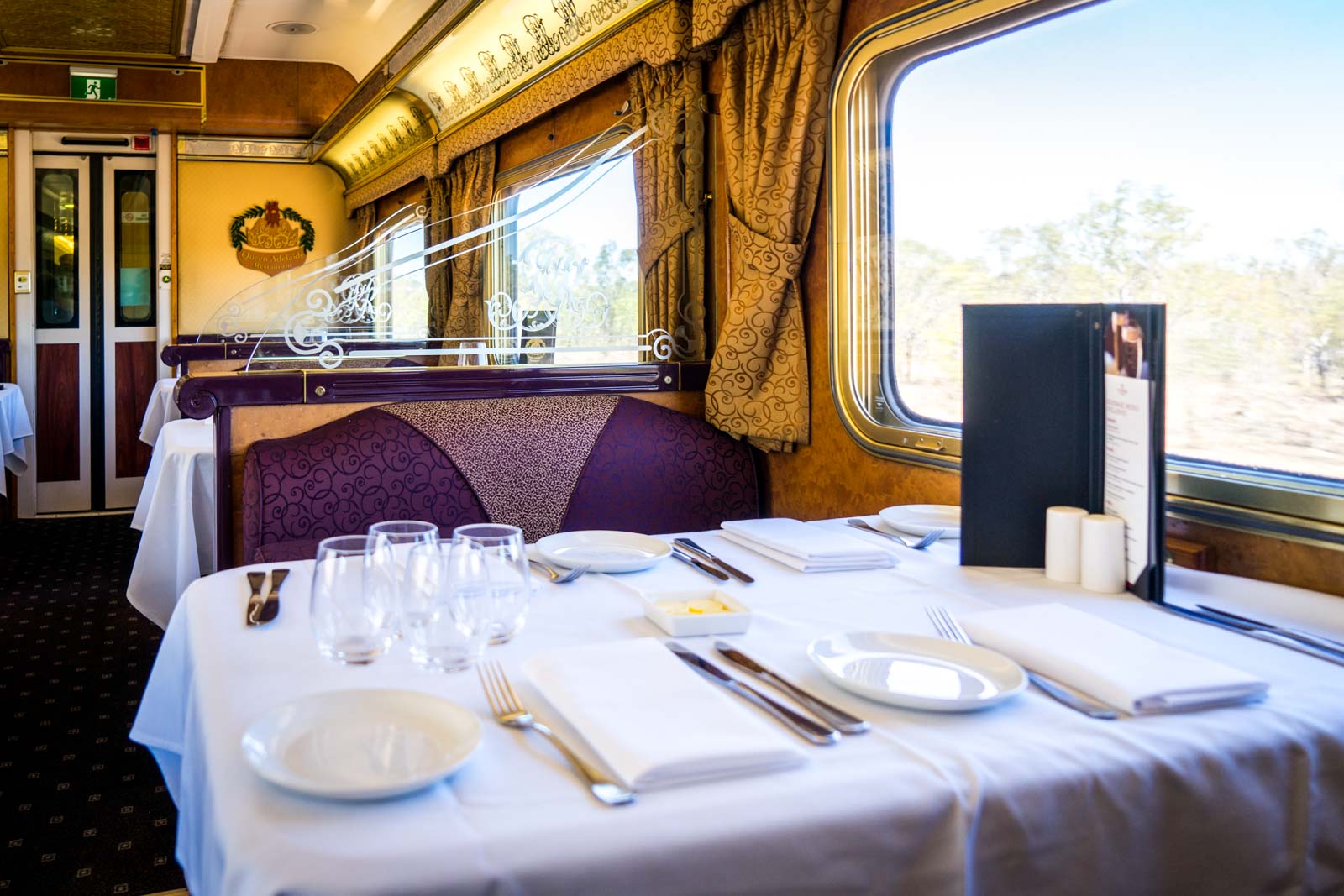 Dinner on The Ghan is a three course affair with several choices for each.

I notice there’s an emphasis on Australian food but it’s only when I later speak to the chef that he tells me the ingredients also reflect the local area we’re passing through. The style is fine dining with some outback flair and the meals are impressive.

I chat to Chris Haywood, who is a chef de partie on this trip. He looks after two kitchens, each of which has two chefs and caters for up to 100 guests per meal. He tells me how it’s more difficult cooking on a train than a normal restaurant, dealing with small storage space, no shops along the way, and other challenges.

“Movement is our biggest enemy on the train,” he says.

“We’re working with hot stoves, boiling water, knives, so it’s about preparing things at certain times when the train is stationary to maintain safe working.” 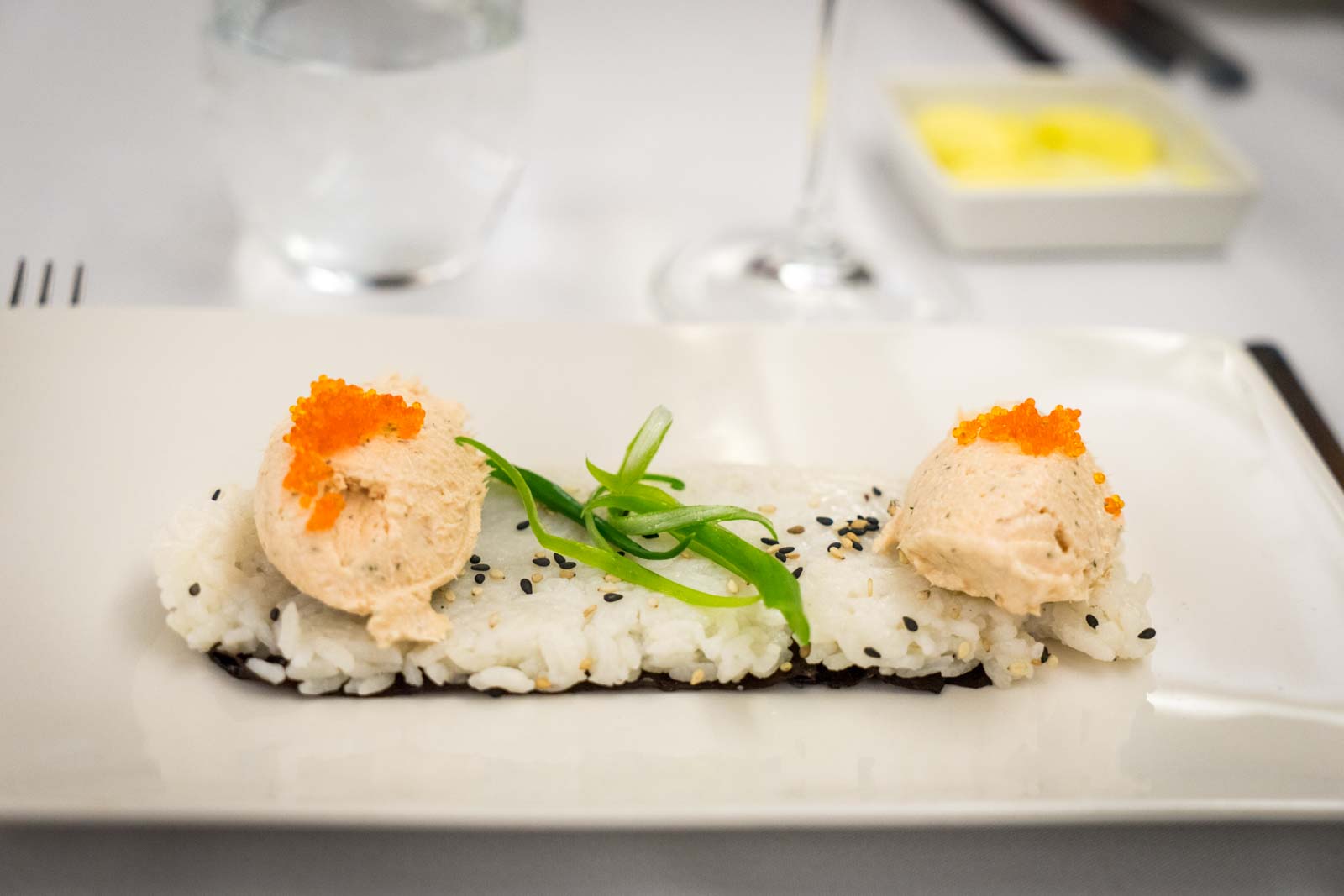 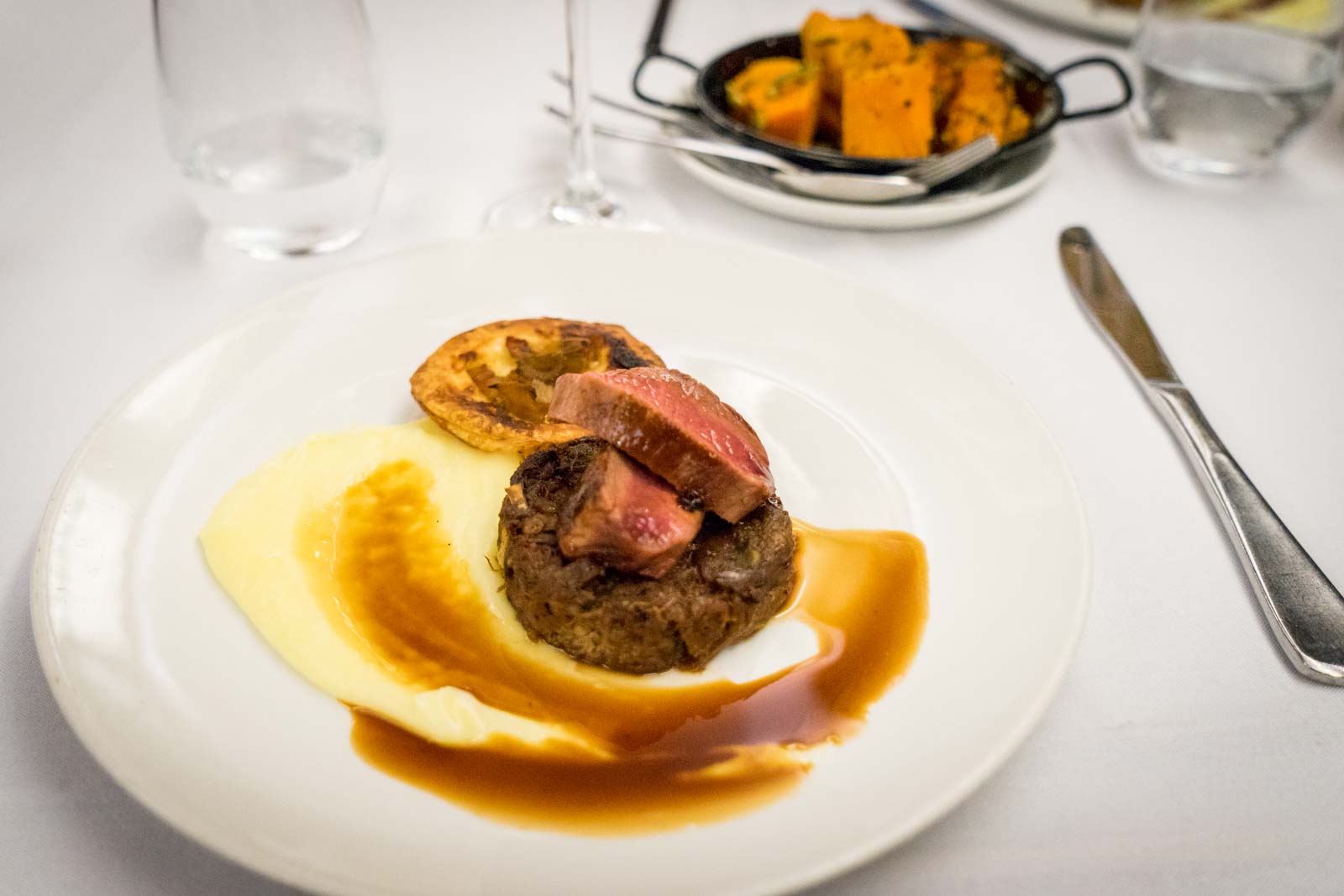 None of this I notice in the restaurant as I enjoy the meal with a glass of wine after a successful first day.

Life on the train

In the morning, when I wake up, we’re almost in Alice Springs. I’m sharing the cabin with my father and there’s not too much space to get ready. What room there is, though, is used efficiently.

Our room in the Gold Class (which makes up the majority of the train) has a small cupboard for storage and its own bathroom with shower.

During the day, there’s a long comfortable lounge to sit on. At night it turns into a bed and another one folds down from the wall, bunk style. 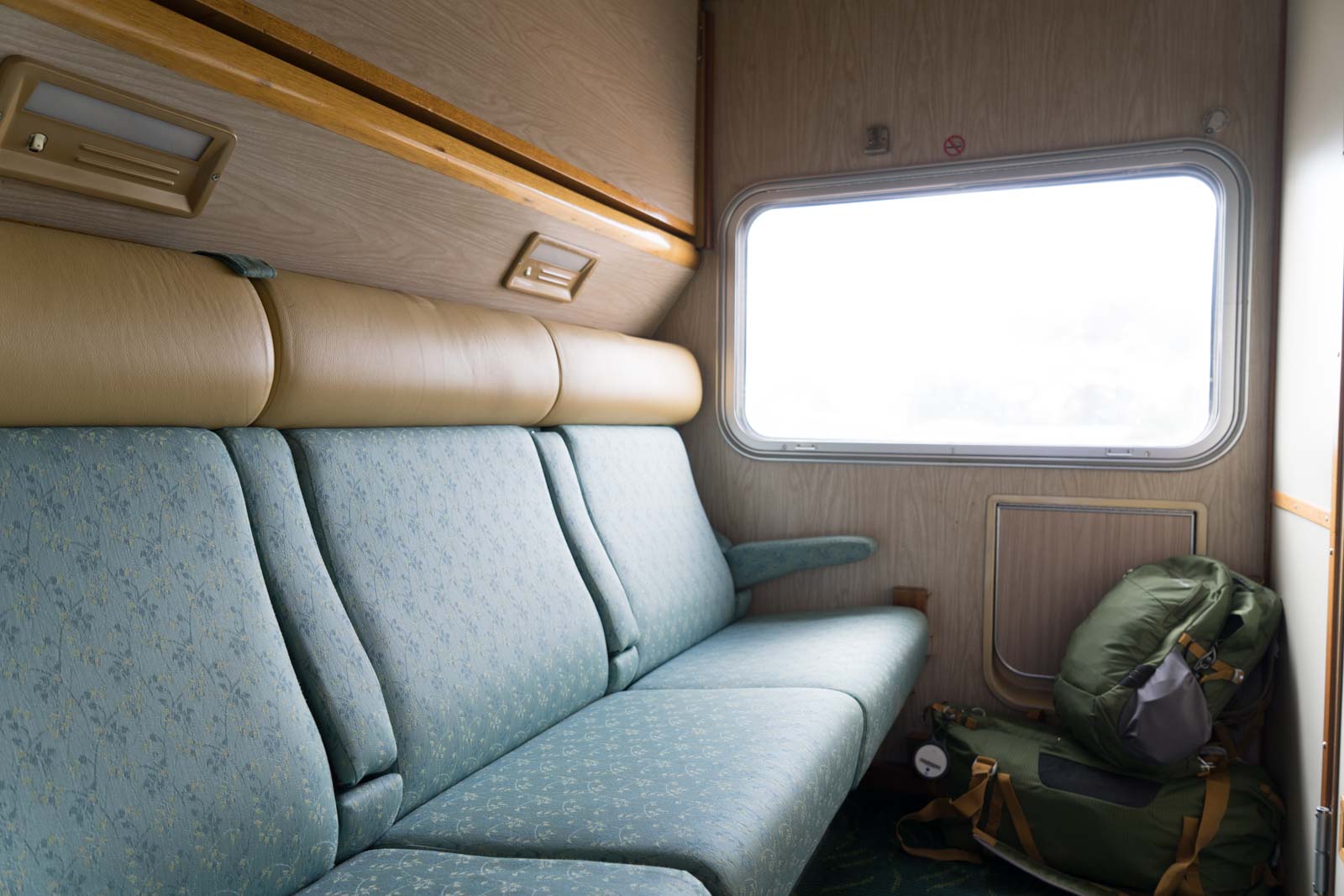 For this journey on The Ghan Expedition, almost all of the excursions are included in the price. There are just a few special ones you can do that are an additional cost.

One of those extra ones today is a scenic flight to Uluru and a tour on the ground around the rock. I’ve been offered to chance to try that myself and I’m pretty excited. Even though I’ve spent most of my life in Australia, I have never been to one of the country’s most iconic sites. I’ve written more about my time there but I can assure you that Uluru is just as magical as you would expect – if not more. Seeing the rock close up gives you angles and perspectives you couldn’t imagine exist.

For most of the train passengers, their day involves discovering Alice Springs or the nearby Simpsons Gap, another beautiful part of the outback. But in the evening, we all come together again.

Tonight there’s a special dinner planned off the train at the Alice Springs Telegraph Station.

Tables are set up in the open air. As the sun sets, some people take a ride on camels, or stand around the fires. A band starts up and night falls.

Under the Milky Way, we all feast on a gourmet barbeque. Before the night ends, there’s a talk about the stars, pointing out the features you can see from here in the Southern Hemisphere. 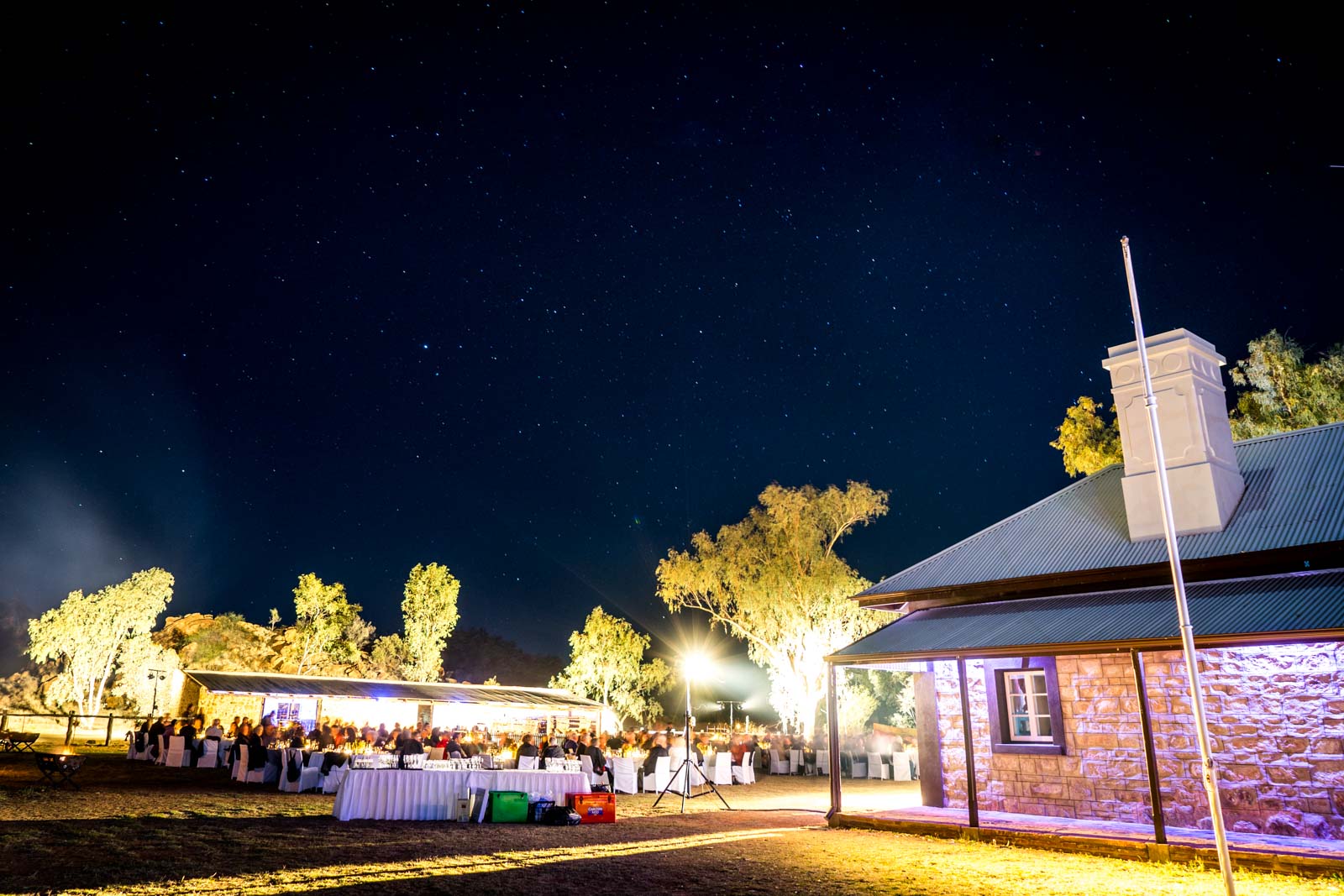 Once again, the train travels overnight while the passengers are asleep. Before going to bed, I stop at the lounge for a glass of wine.

There’s a great selection of Australian wines available and I’m attempting to try as many as possible over the course of the journey. All the food and drinks, including the alcohol in the lounge, is included in the price of the trip.

It’s nice to be able to have what you want, when you want, and not touch your wallet for the entire four days. The next morning we’re almost at Coober Pedy. As I wait for our arrival, I watch the desert roll by outside the window and eat my cooked breakfast.

Coober Pedy is a South Australian mining town that boomed after 1915 when the first opals were found here. This mining history is part of the town’s story but the most interesting aspect is the style of living here.

Many of the residents live underground, digging their homes into hills or beneath the surface. They do it this way to maintain a constant temperature inside, in a place where outside it can get above 40 degrees in summer and to freezing at night in winter. 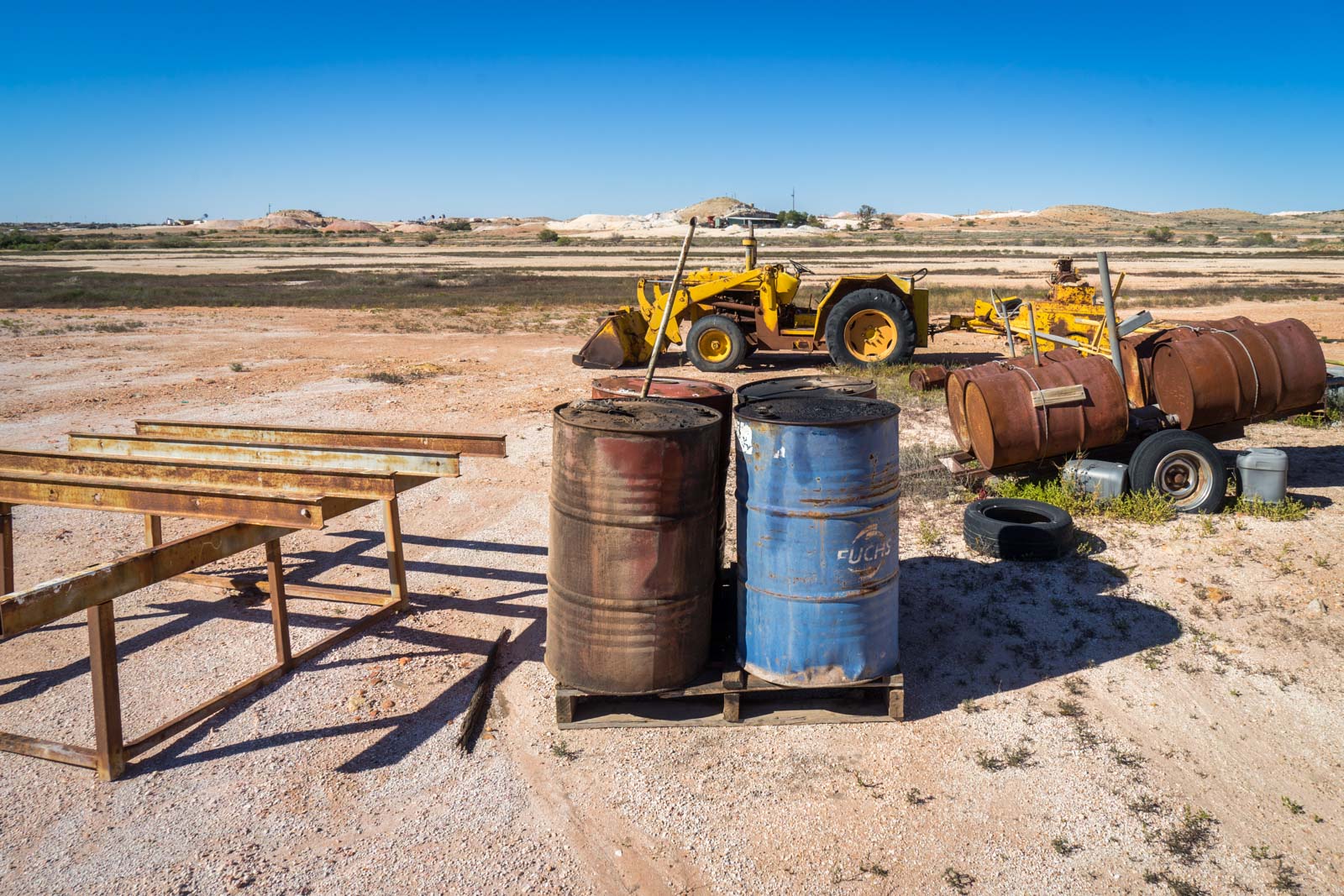 I’ve got some more details in my story about Coober Pedy and I’ve also put together some photos from our side trip to a nearby place called The Breakaways. It’s stunning and is not that well known, so is a real treat.

The train station for Coober Pedy is about 50 kilometres out of the town at a place called Manguri. Although, calling it a ‘station’ is being a bit generous. It’s really just a stretch of red dirt with a second parallel track so other trains can pass by.

When we get back from the excursion, there’s a bonfire going and the staff are serving drinks and snacks. People gather in groups around the tables and chat. New friendships have clearly been made already.

Although people tend to come on The Ghan alone, as couples, or with family members, it’s hard to avoid interacting with other guests. The dining carriage, for instance, has tables of four and you’ll usually be seated with someone else.

The layout of the lounge lets you talk amongst yourself or turn slightly and start a conversation with the people nearby.

And there are plenty of opportunities to mingle on the excursions. 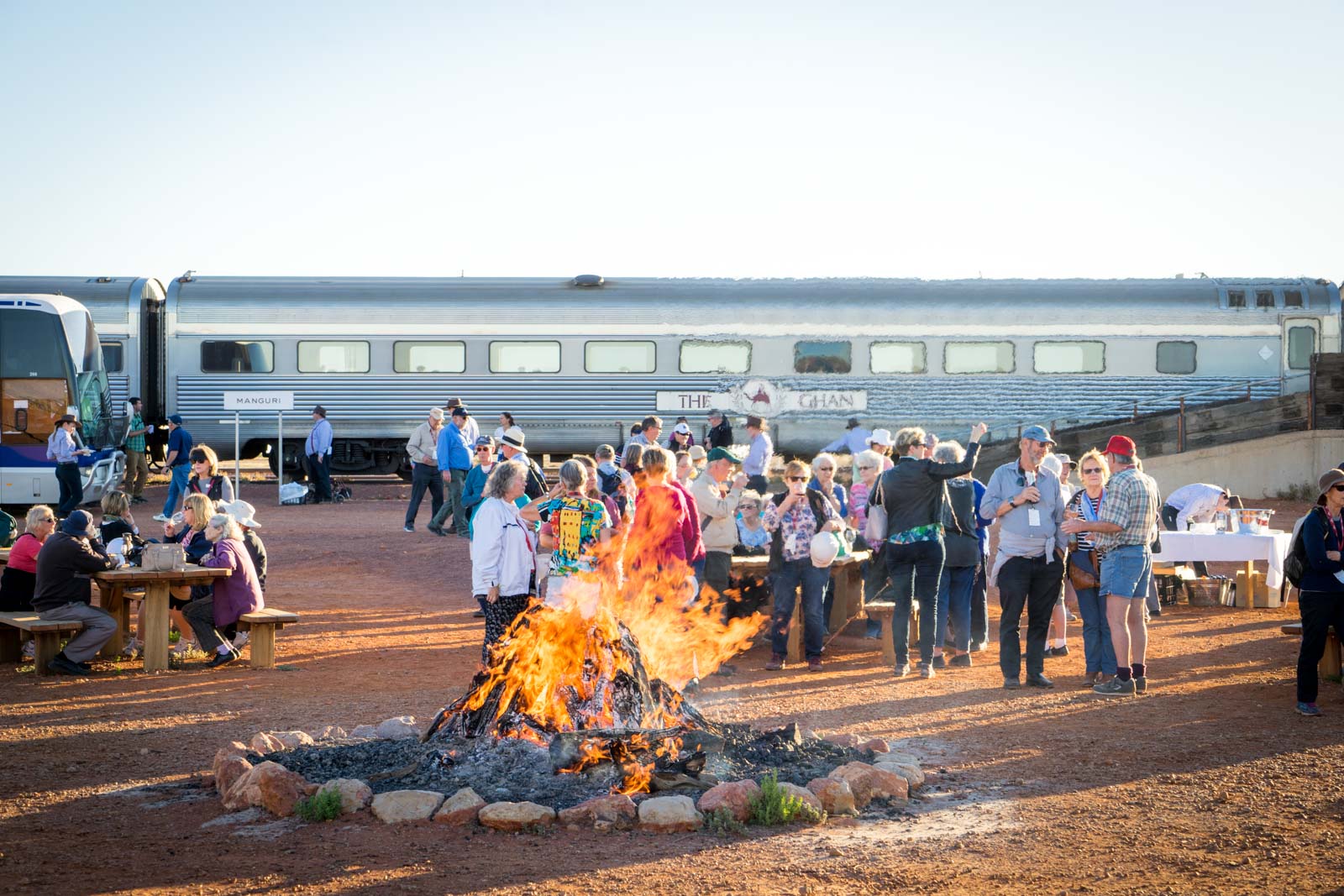 Sonya Lemondine is the restaurant manager on my trip and one of the things she does is put people together for meals when passengers need to share a table. It’s a job she loves but it takes a certain skill.

“You need to have that sense of knowing different personalities,” she tells me when I ask about it.

“I love to have a joke and make people laugh and you need to know the right way of doing that and the right people.”

I’m sure I am one of the youngest people on the train, although I do meet other passengers my age who are travelling with older family members. Doing the journey with my father, for instance, is actually a nice way to spend time together and see some of the country. But most of the guests are in their fifties or above. 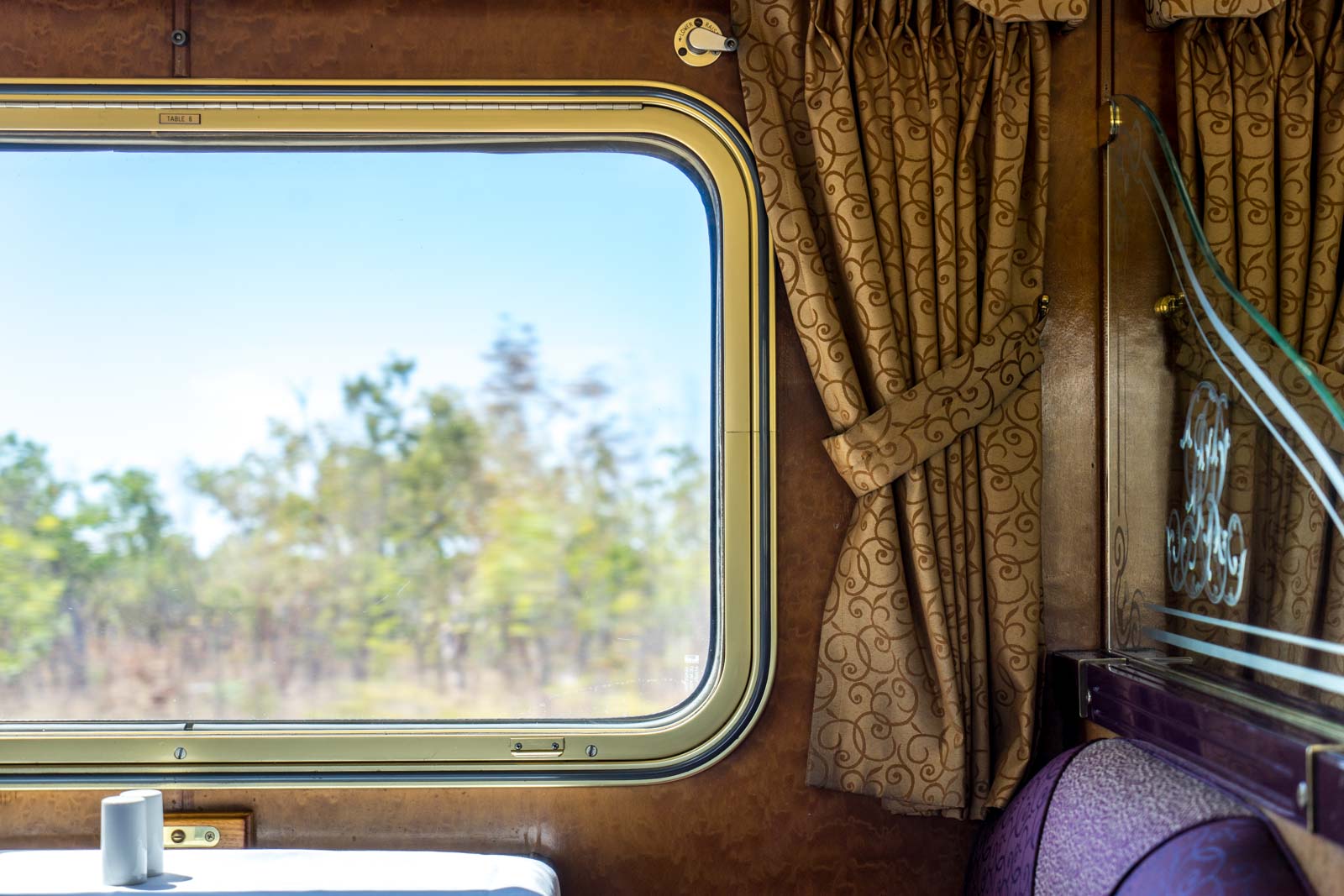 I also tend to think it’s about the image – luxury train travel is the kind of thing only retired people do, isn’t it?

Well, I’m not so sure. I reckon the trip would be incredible if the lounge was full of thirty and forty year-olds, enjoying the wine after a day in the outback.

But what’s most surprising for me is how little time there actually is to just sit around and chat. The evenings are leisurely but the days are busy, filled with excursions and meals.

This isn’t the long days of staring out a window and reading a book I had anticipated. It’s more like a cruise where the nights are for travel and the days for activities. 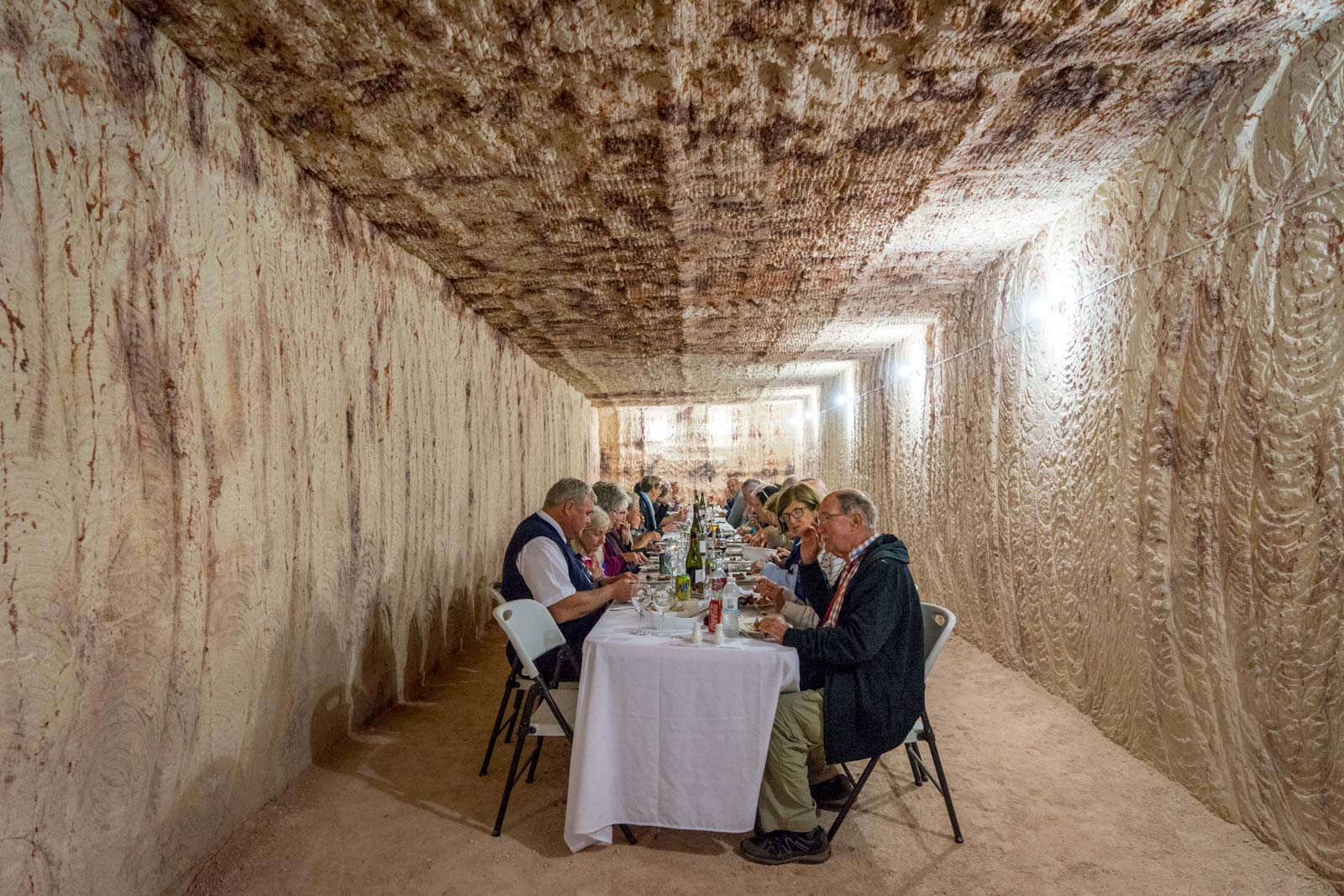 When we arrive in Adelaide and everyone starts to leave the train, it’s warming to see passengers farewelling each other and saying goodbye to the staff.

A bit of a bond has formed over four days on the track. I know the names of all the people who have been working in my section and I wish each of them the best. 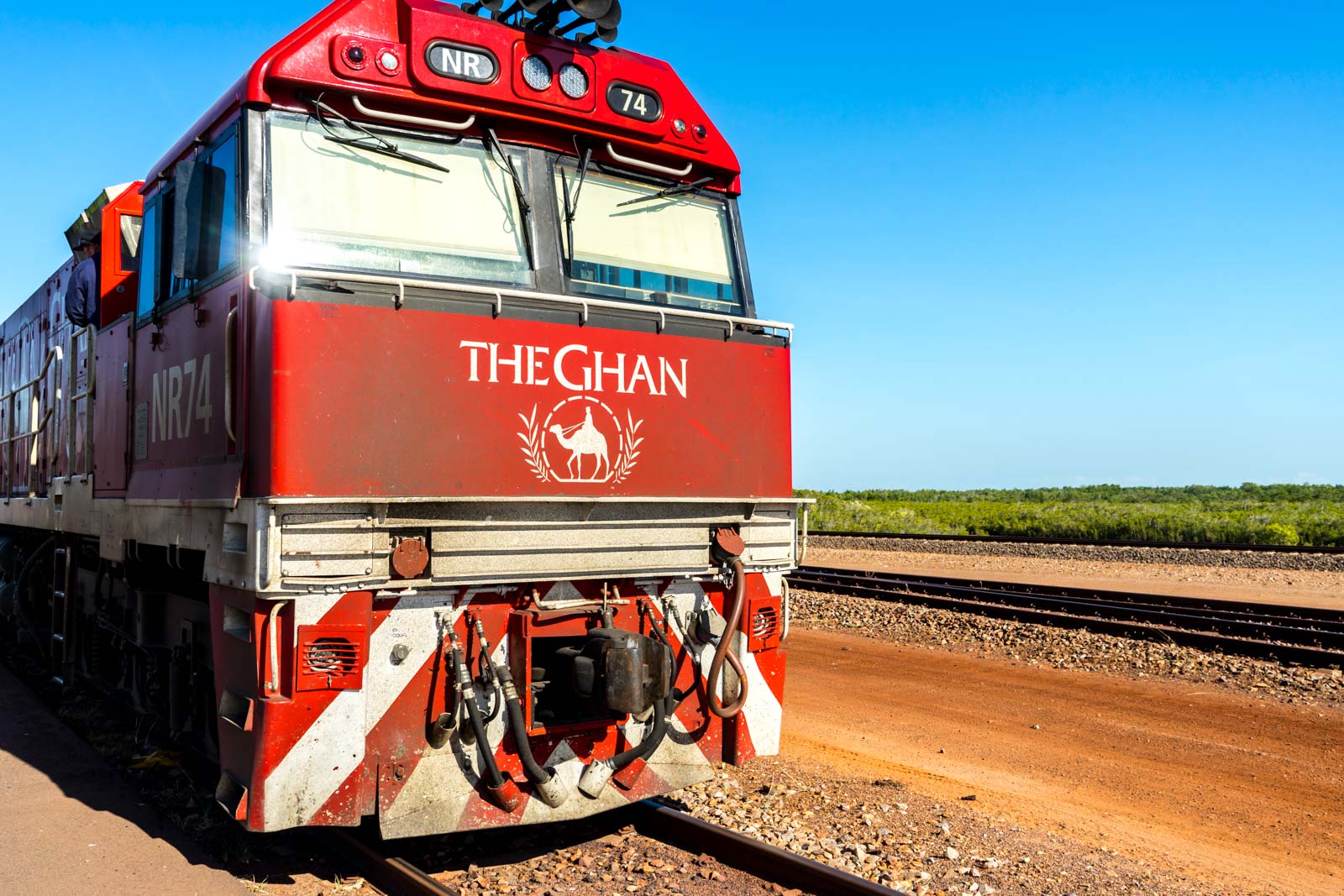 Back in a big city, I notice almost immediately that my jumper smells like bonfire and red dirt is still on my shoes. Little traces of a (luxurious) adventure.

Time Travel Turtle was supported by Great Southern Rail but the opinions, over-written descriptions and bad jokes are his own.