The story of Osaka Bay, Japan

For much of modern history, the real Gateway to Japan has been found at Osaka Bay.

It all basically started with the geography of trade. Go back as early as 2000 years ago and the bay was conveniently on the way along one of the busiest maritime trading routes of East Asia. Coupled with that, it offered access to a whole network of rivers that could be used to transport goods further inland. So, it made sense for this to be where foreign trading vessels from other Asian countries would arrive.

This set off a chain reaction which brings us right up to today and still influences how you, as a tourist, can enjoy the spoils. But let’s look at it step-by-step. 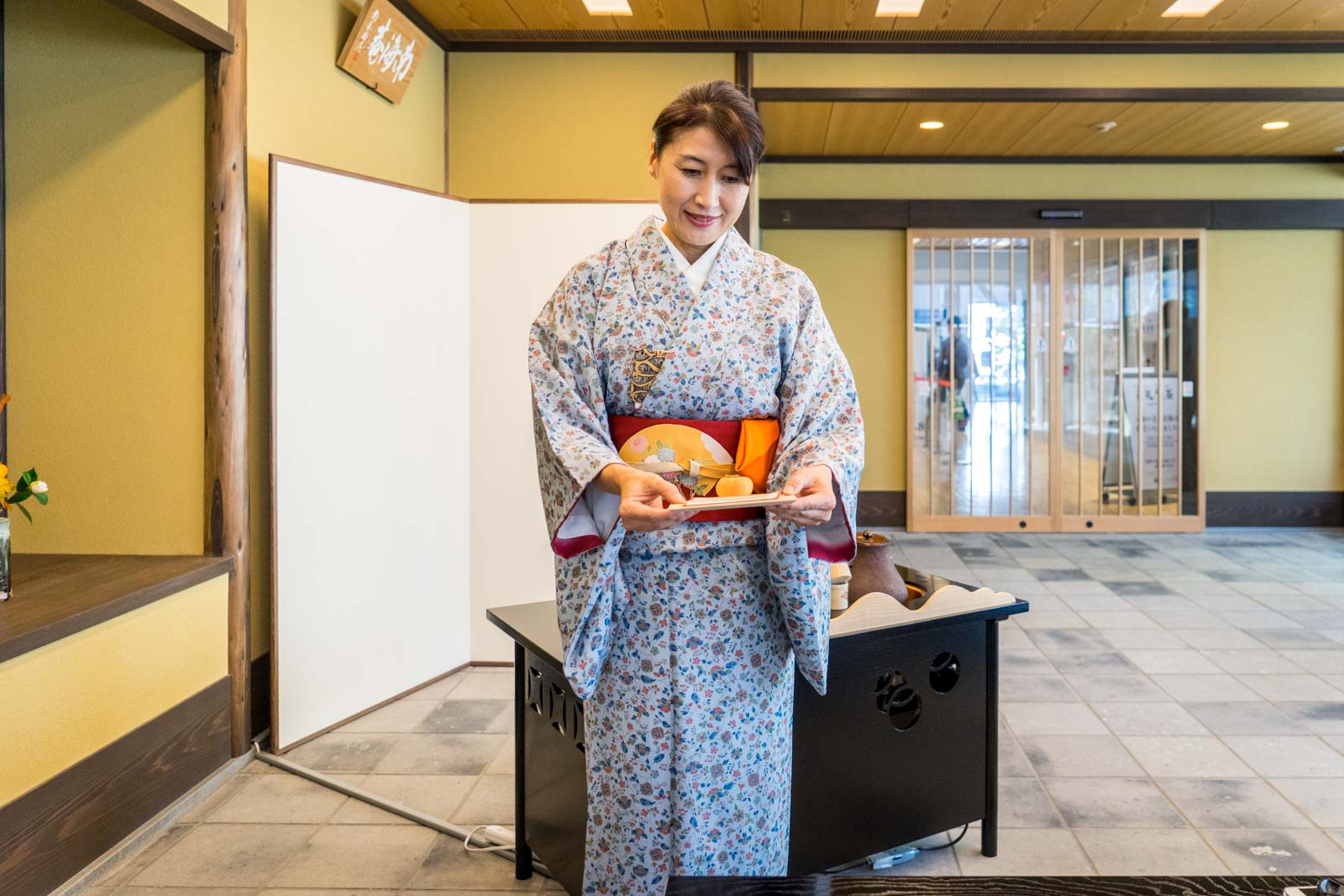 With growing economic power, came growing political power. The historical capitals of Japan were established in the region surrounding Osaka Bay and the ports began to receive not just foreign goods, but also foreign dignitaries.

You can see evidence of this from as early as the 5th century AD. If, back then, you were to come ashore near Sakai, you would be confronted with enormous burial mounds shaped like keyholes, rising up from the ground like hills, stripped of trees or vegetation, surrounded by moats. 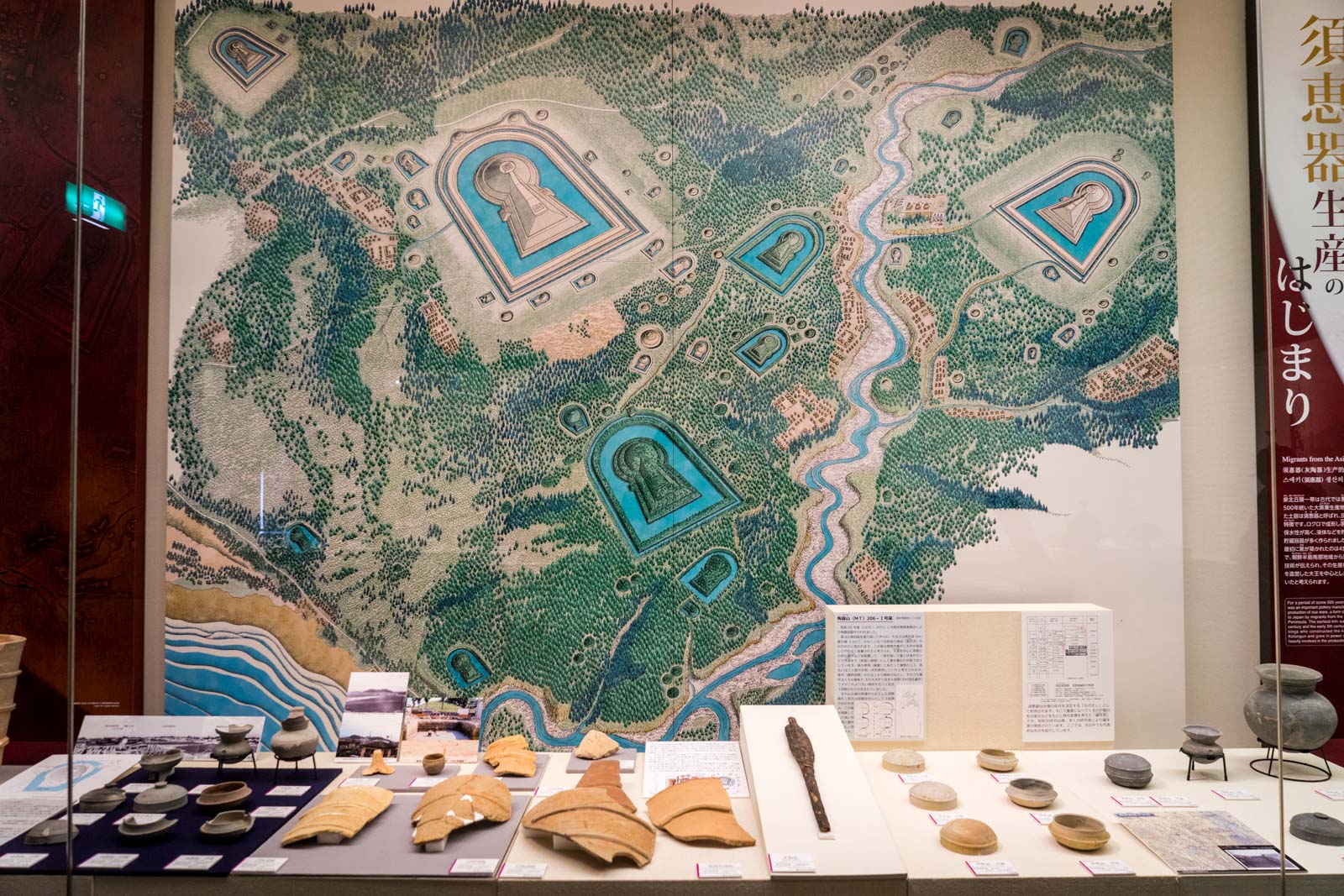 These were the eternal tombs of the Japanese Emperors and nobility of the time. The tombs were intentionally built close to the coast, in part, so that any foreigners who came to visit the country would be immediately struck by their grandeur.

These days, you can still see quite a few of these burial mounds – or kofun, as they are known. The most impressive one is the Nintoku-tenno-ryo Kofun, which is 500 metres long. 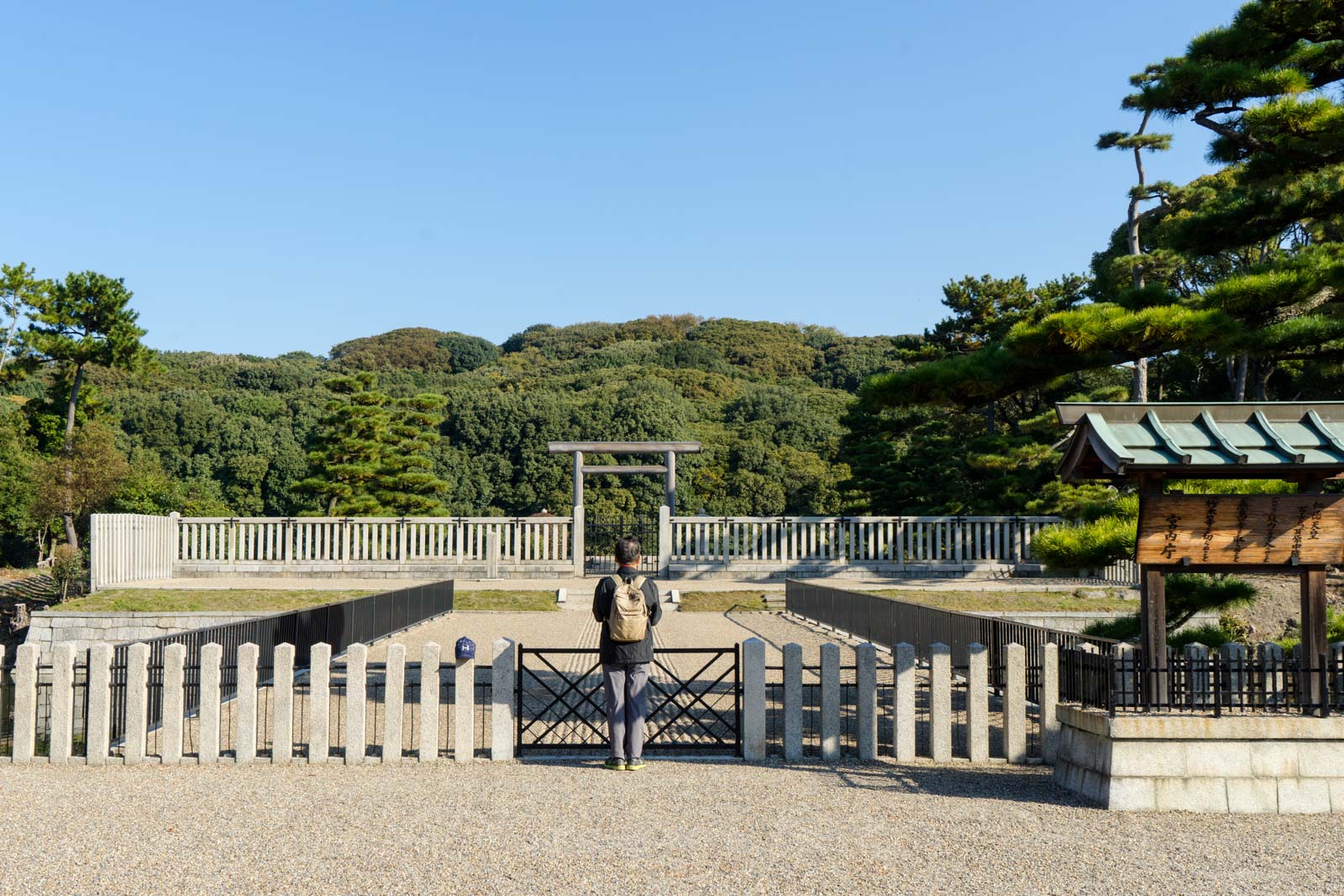 It was also during this period that foreign visitors first brought Buddhism to Japan. Osaka Bay was the gateway for the country’s first non-indigenous religion. Buddhism spread quickly but the first temple was built where it arrived – in Osaka.

The site still exists today, long after it was founded in 593 AD. Although the buildings at Shitennoji Temple have changed since then, it has been in continuous use. The temples and shrines that are there now are still worth visiting and there is a wonderful collection of history contained within them. 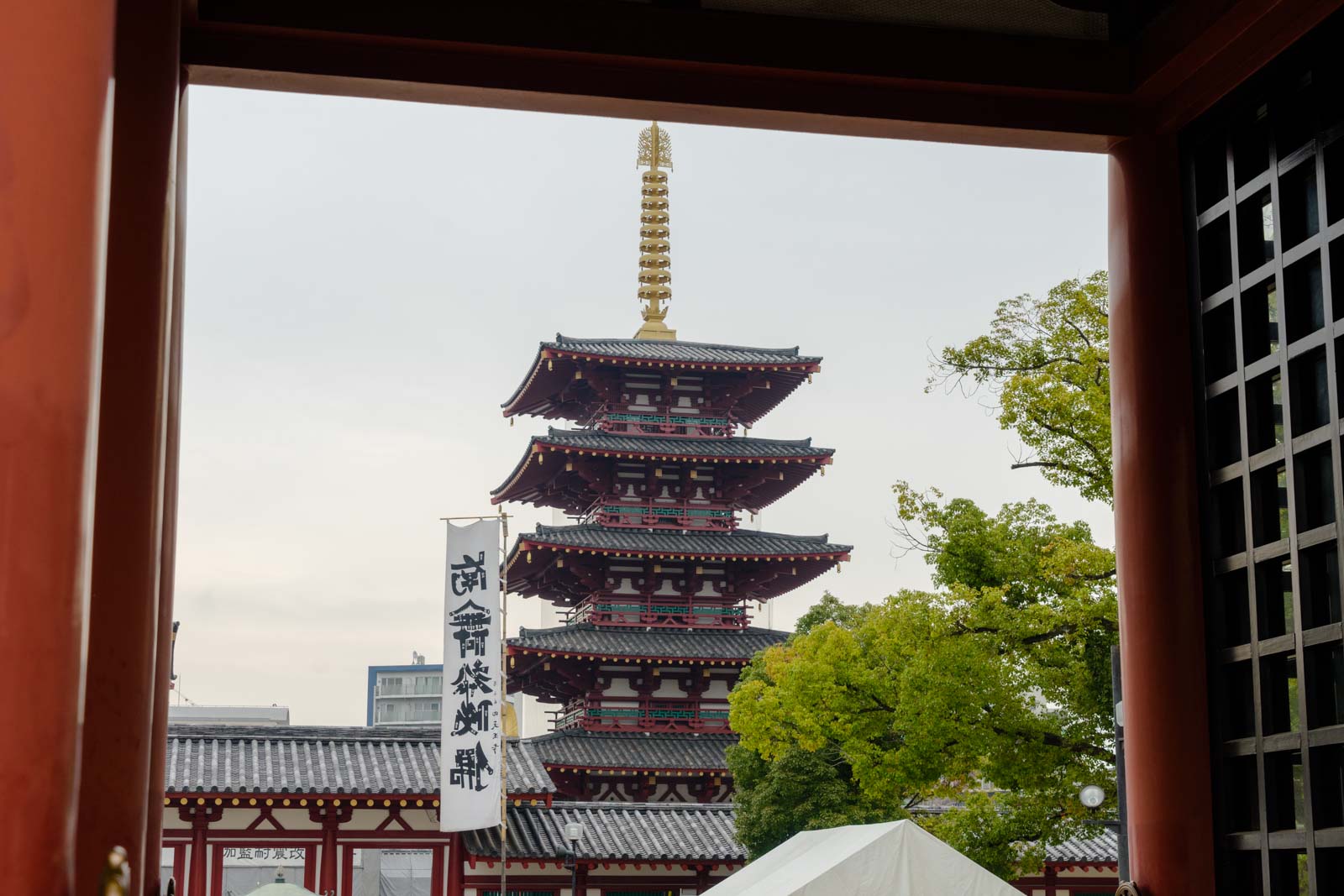 With economic, political and religious strength, the cities around Osaka Bay prospered over the following centuries. Traders from across Asia brought new skills and new products, creating industries that Japan had never seen before.

In Sakai, for instance, craftsmen became famous for making steel samurai swords. Rather than have just one person make an entire sword, though, each of the stages was done by a different craftsman. 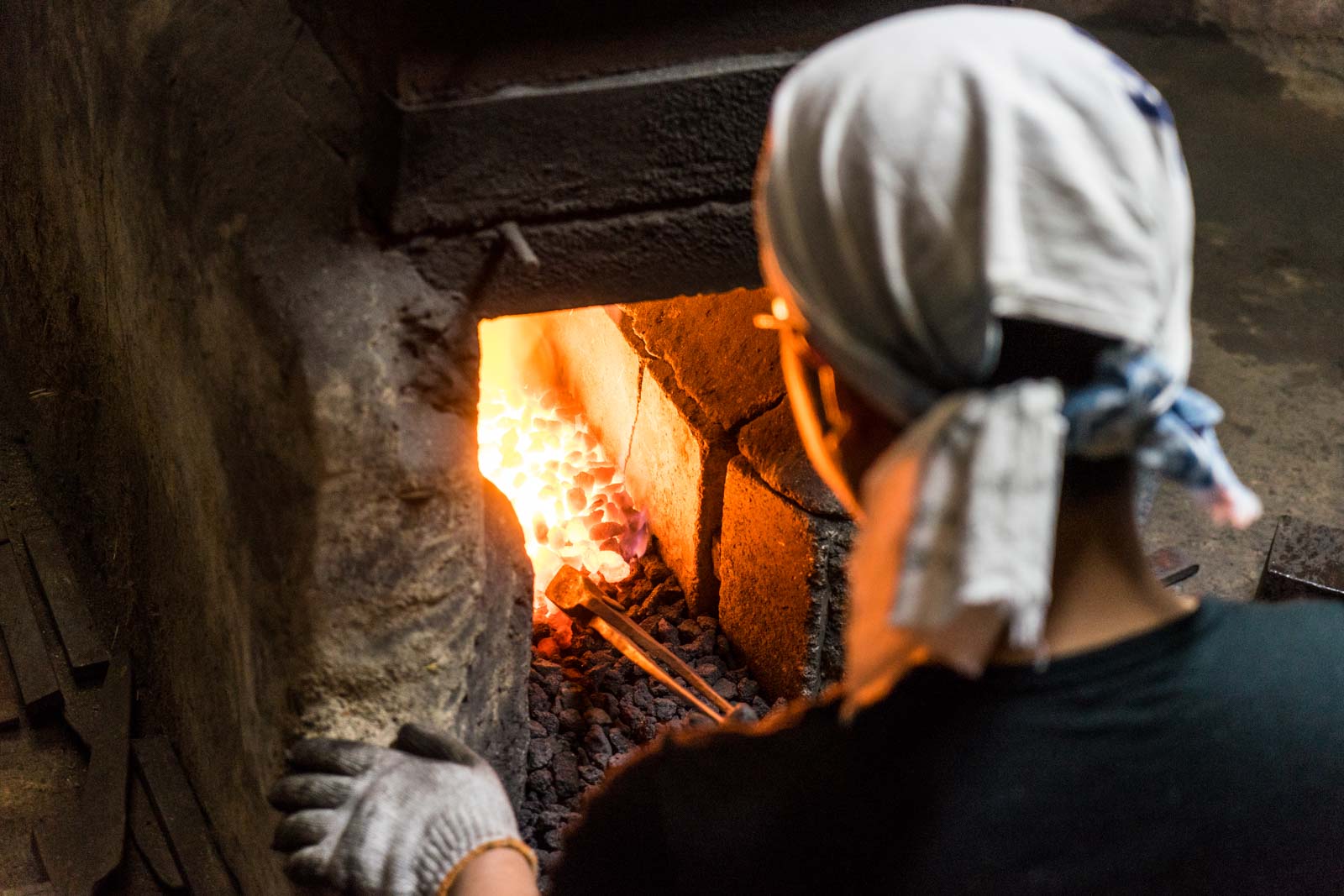 At some point, the industry evolved from swords into knives but the same principle remained. One person will forge the shape of the knife in their small factory, it will get transported to the next business where the knife is sharpened, and then it will be taken to the final craftsman where the handle will be attached. 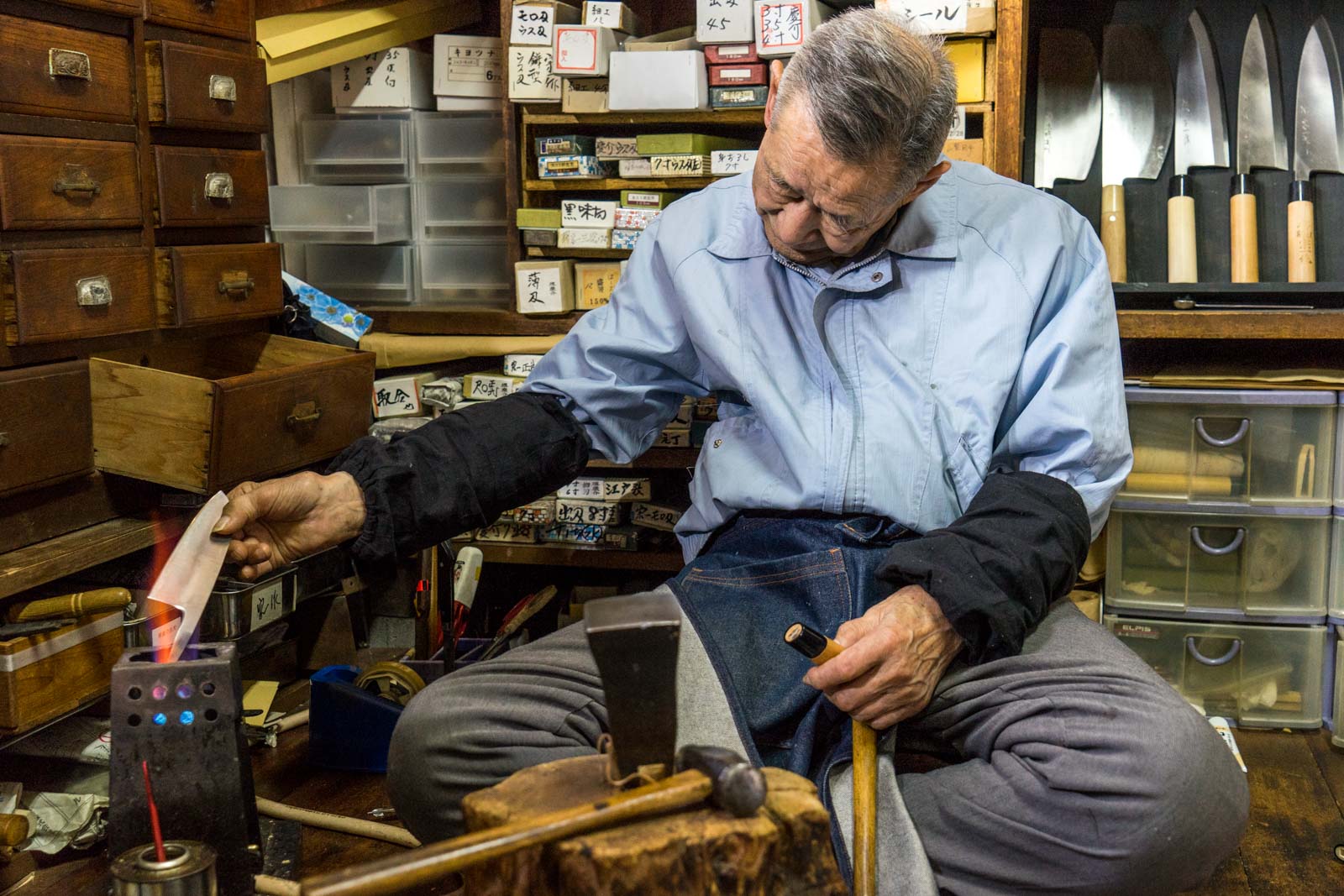 Sakai has become internationally famous for its knives and today you can visit some of the small factories (often not much bigger than the shopfront) and see the work being done. It’s extremely impressive work that had its origin in the international trading history of Osaka Bay.

Over the years, a lot of industry has decided to make Osaka Bay its home, with workshops and warehouses appearing all along the coastline, linked to other parts of the country. Especially when the world entered the peak of maritime trade and exploration from the 16th century onwards, the ports around the bay became critical for European and local merchants – the economic gateway to Japan. 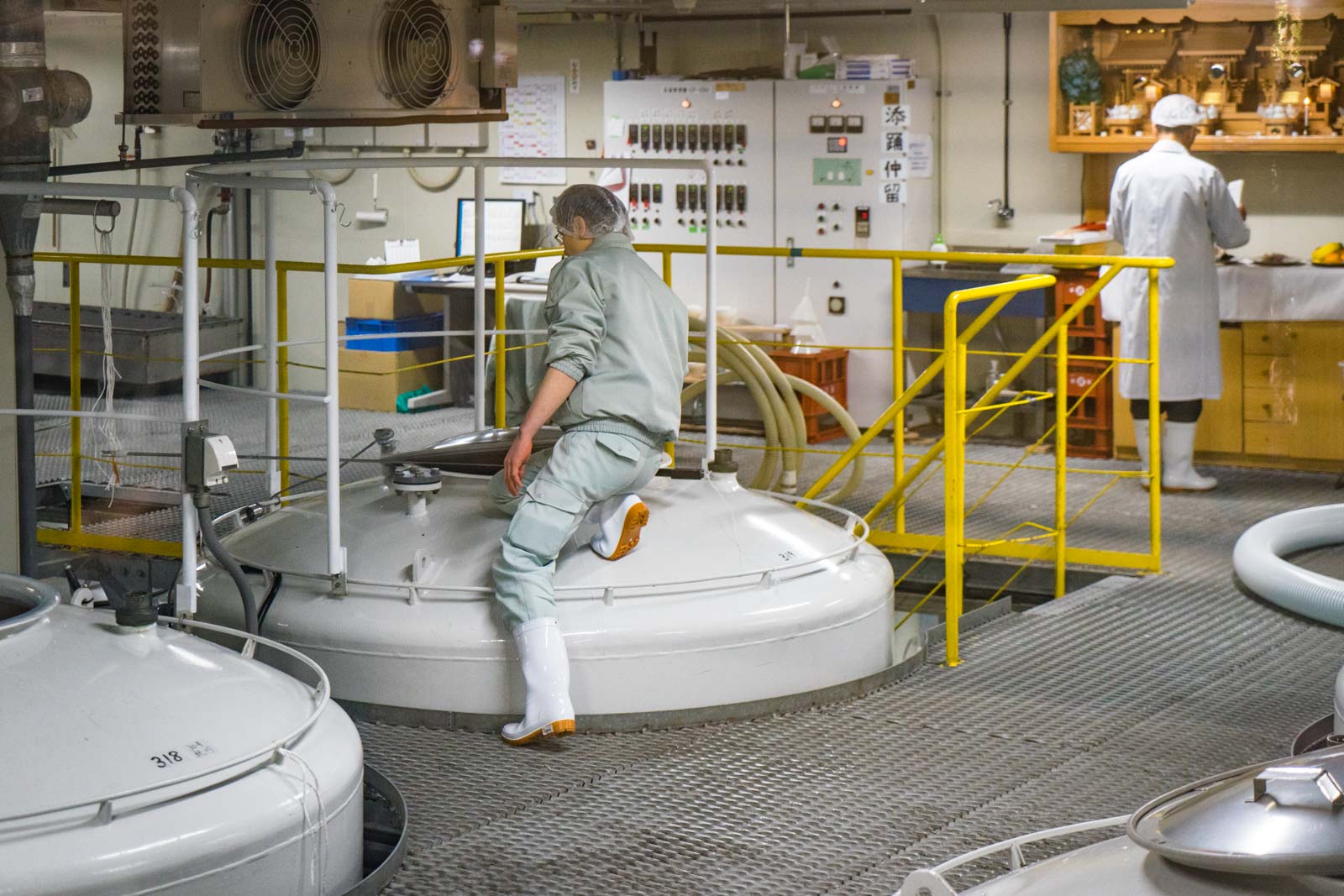 Take, for instance, the sake factories in Kobe. Sake – the Japanese rice wine – was already being made in the Kobe region because of the good quality of rice and water that the land offers. But what could have been a series of boutique breweries turned into a major sake production area because of the excellent transportation links offered by the port.

There are now quite a few large breweries still in operation that you can visit. If you’re interested, one of the most interesting ones is the Fukuju company, which provides the sake for the Nobel Prize banquet dinners. 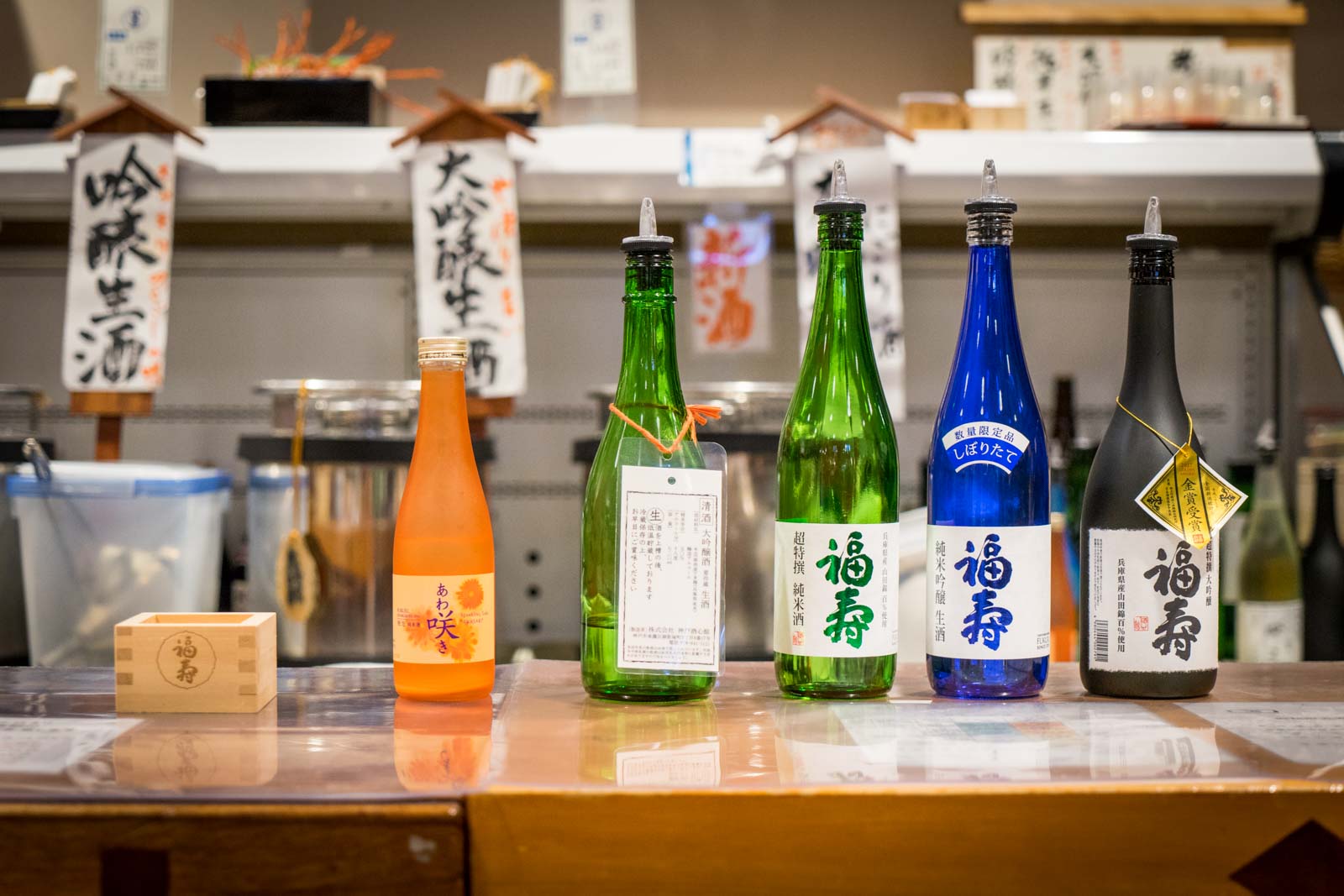 When we consider the state of things today, the sake factories are a good example that Osaka Bay and its ports are not just the stories of history. But international trade has changed dramatically, the political centre has shifted away from this region, and local industries are not as important as they once were. So… what about today?

Is Osaka Bay still the Gateway to Japan?

Well, there’s no doubt that when the capital was moved to Tokyo, a new gateway was created. However, I don’t think it has diminished the influence of Osaka Bay. In some ways, the focus on Tokyo has actually allowed the cities around the bay to evolve into vibrant cultural centres where tradition is as important as innovation. 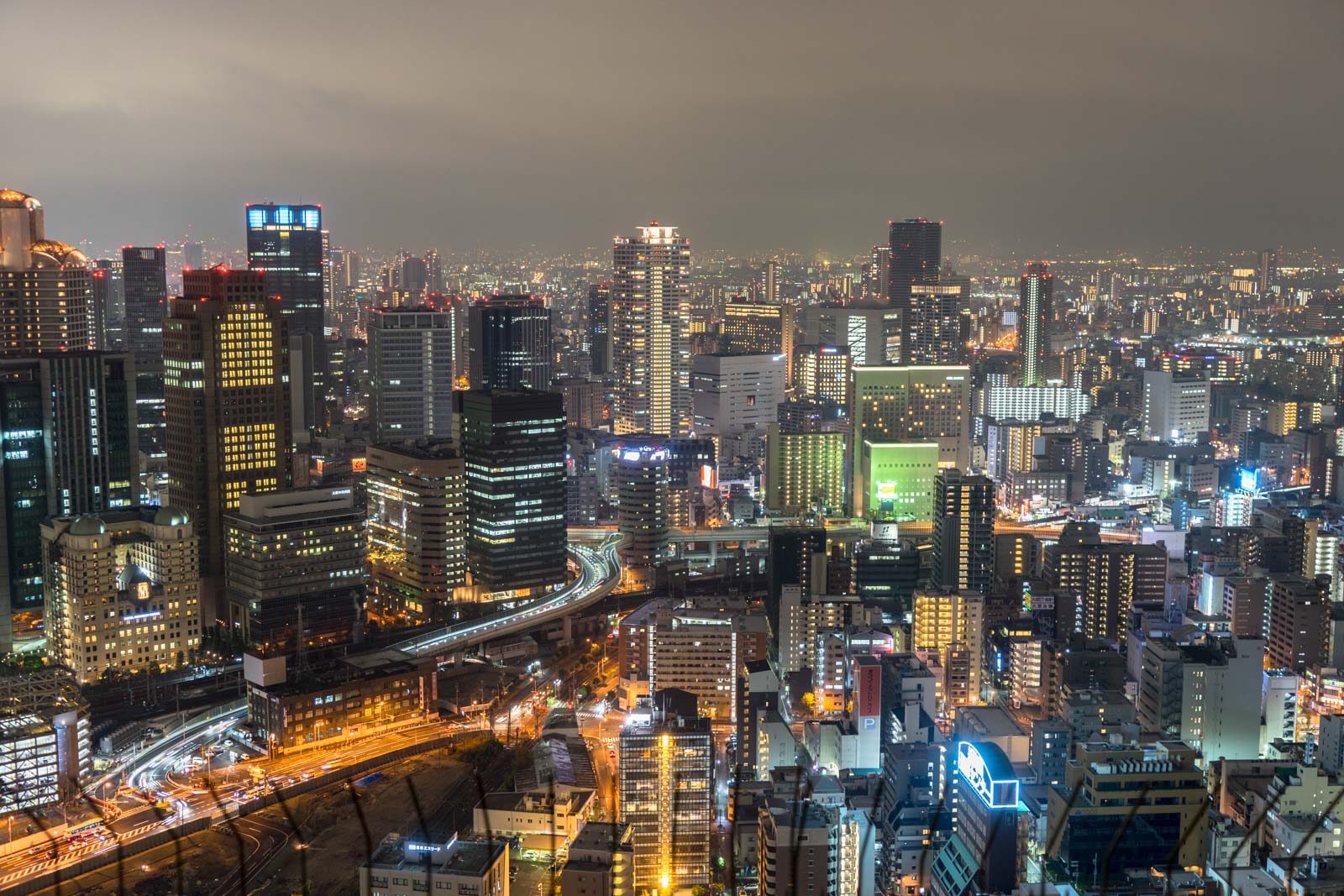 Each of the three port cities around the bay that I’ve mentioned – Sakai, Osaka and Kobe – offers a fascinating blend of history, industry, and modern life. And, more than most cities in Japan, you can sense the influence that has come from generations of international visitors. Especially in the food! 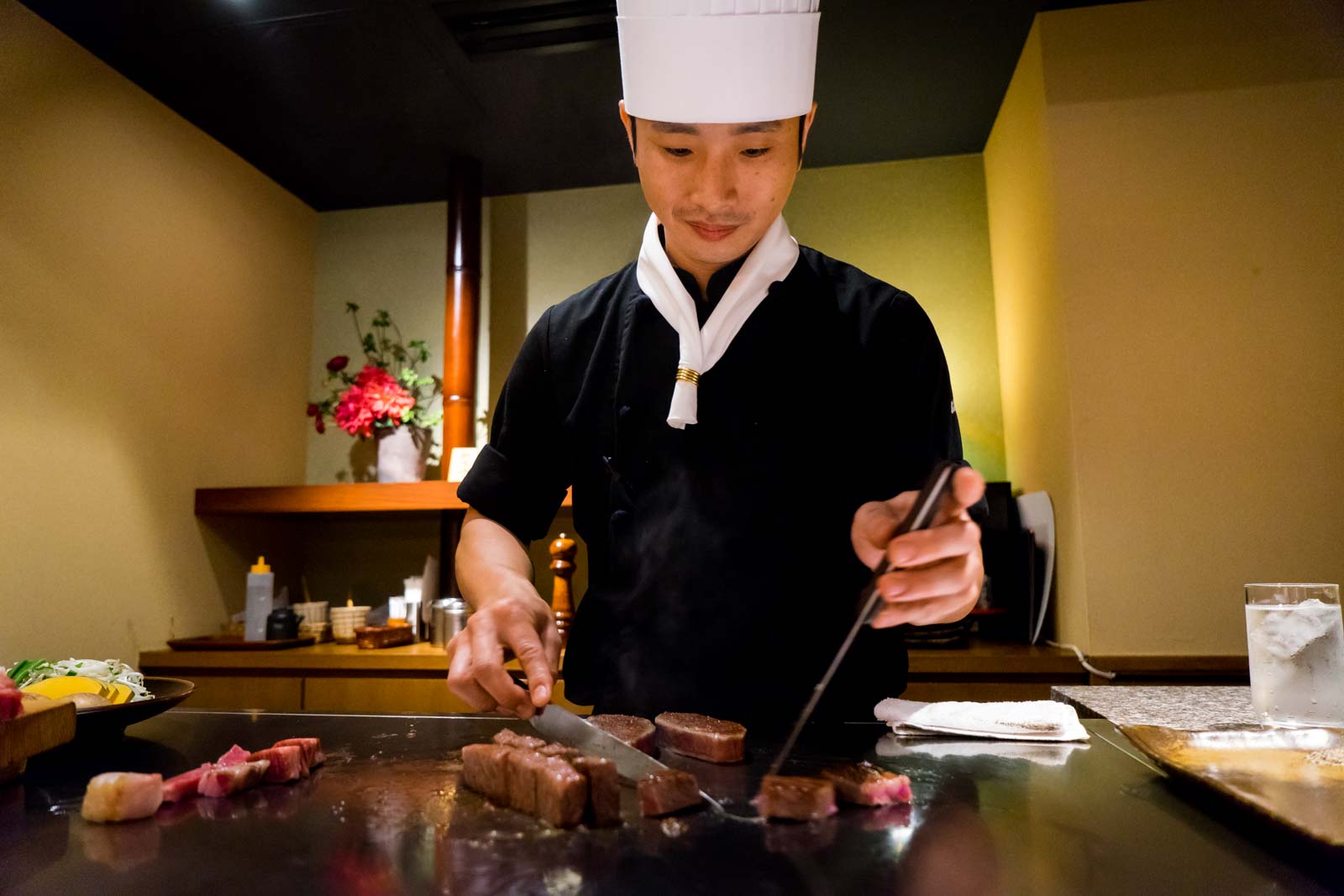 Perhaps a new gateway is developing here. One that replaces trade and diplomacy… with tourism.

Just 30 kilometres from the centre of Sakai is the country’s busiest airport outside of Tokyo, Kansai International (KIX), with more than 25 million passengers every year. Constructed on a specially-built island in Osaka Bay, the airport is getting more flights every year, including a new one from Sydney this month. Some international visitors are using it just as a hub to get on domestic flights to other parts of the country, but others are arriving here, rather than Tokyo, because some of the most popular tourist destinations are all within easy reach – places like Kyoto, Nara and Koyasan.

And, of course, tourism has also become an important part of this region because of attractions like Universal Studios Japan. The theme park has a dedicated area to Harry Potter, which is extremely popular. And there’s a new section this year all about Minions, which is a lot of fun. Everything is pointing towards an increase in tourism for cities like Osaka, Kobe and Sakai – and I can see why. The more time I spend exploring, the more I discover, and the more I realise that the average traveller doesn’t even know that half these things exist.

Now that I’ve told you a bit more about Osaka Bay and the area around it, I’ll be writing a story with a whole bunch of practical information about how you can spend your time here. That’s coming up next week!

Time Travel Turtle was supported by Kansai Area Tourism but the opinions, over-written descriptions and bad jokes are his own.