There are a few moments in history when you could argue that modern Australia began.

Of course, people had lived on the continent for tens of thousands of years before the Australia we know had even been imagined, and I don’t want to take away from that. But this story is about the Australia created by Europeans.

You could consider 22 August 1770 as an important date. It was the day that Captain James Cook, a British explorer, landed on the east coast of Australia and ‘discovered’ it.

You might also look at 26 January 1788. It was the day that the First Fleet, full of British settlers, arrived in Sydney Harbour and the flag was planted in the soil. This date is still used for the annual Australia Day celebrations.

Perhaps another date would be 1 January 1901 when Australia became an official country, with the federation of the individual states.

Or perhaps there’s a lesser known date of which we should also take note – 9 May 1901. This was the day that the new country of Australia’s first parliament was opened. It took place in Melbourne in a place known as the Royal Exhibition Building. It’s this building that I want to tell you about today. 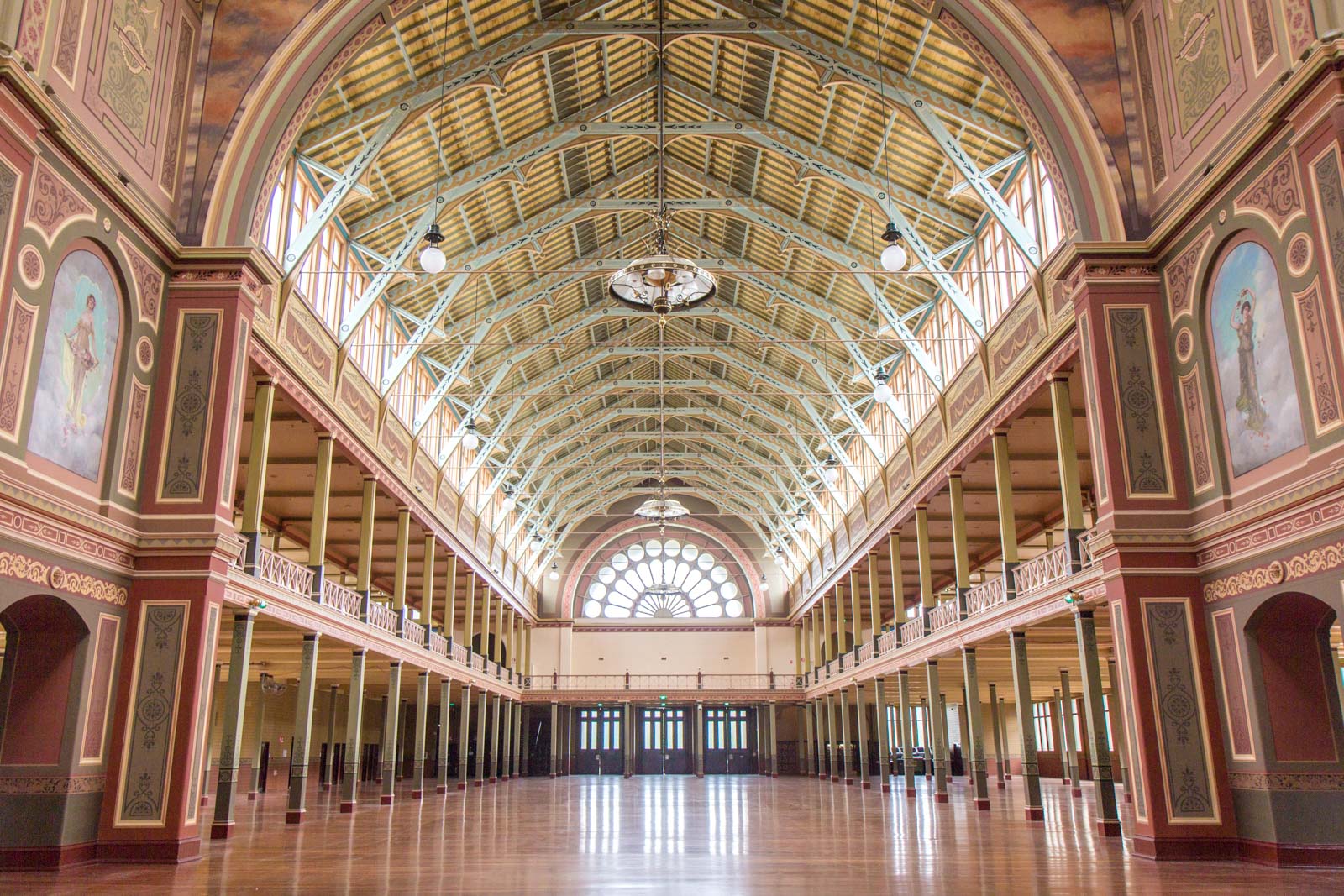 The reason I highlight this event is because a country, I feel, is defined in many ways by its government. Not the particular people in the government or the leader of the time, but the structure which allows for the democratic (or not) process by which the people create their nation. So was Australia really a true country until the population had elected its representatives? 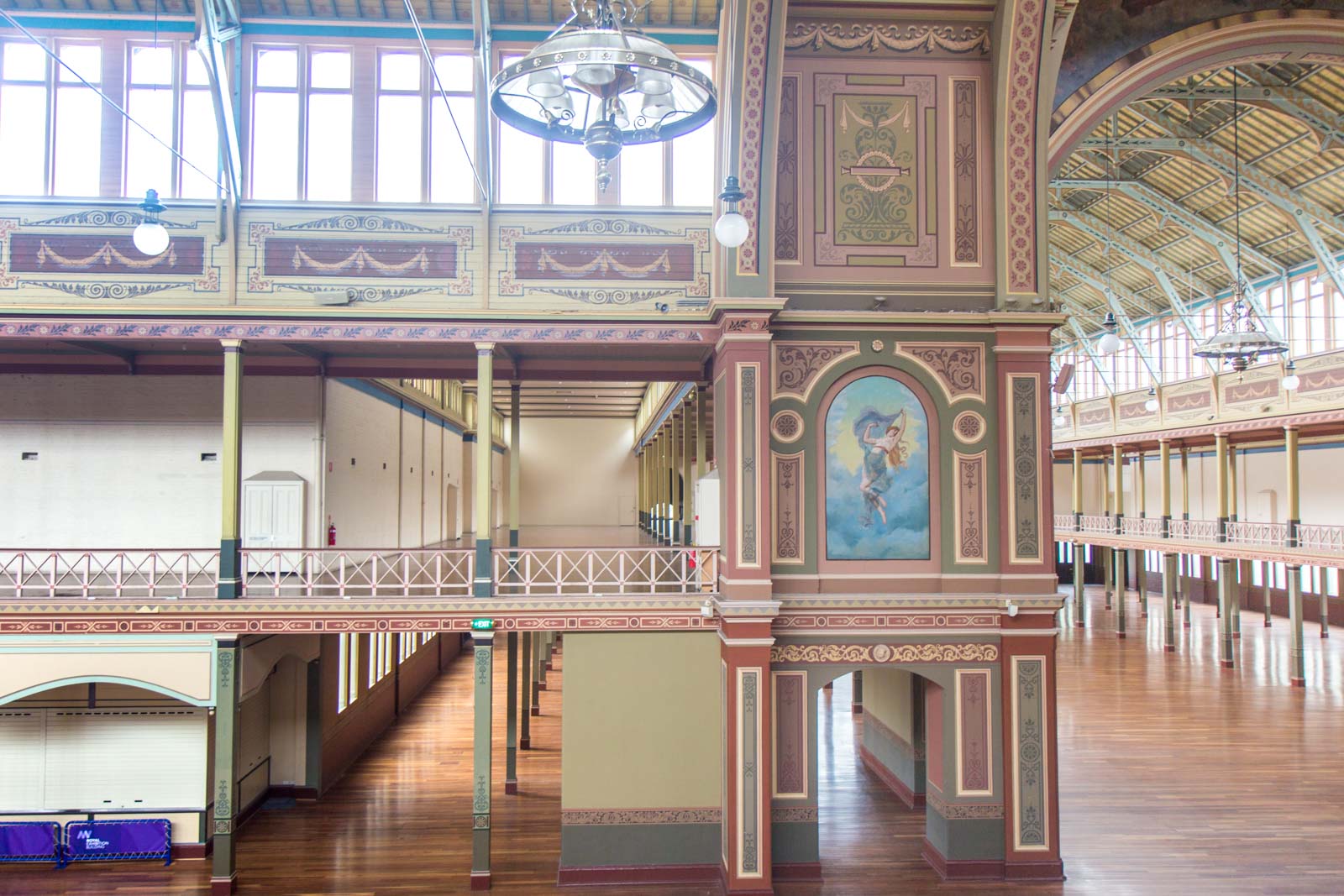 While you ponder that thought, let me tell you why the first parliament was in Melbourne. The Australian Constitution specified that the country’s new capital had to be in New South Wales but at least 100 miles from Sydney – so a new city had to be created. Canberra wasn’t ready for the parliament until 1927, so it used the Victorian Parliament building until then. 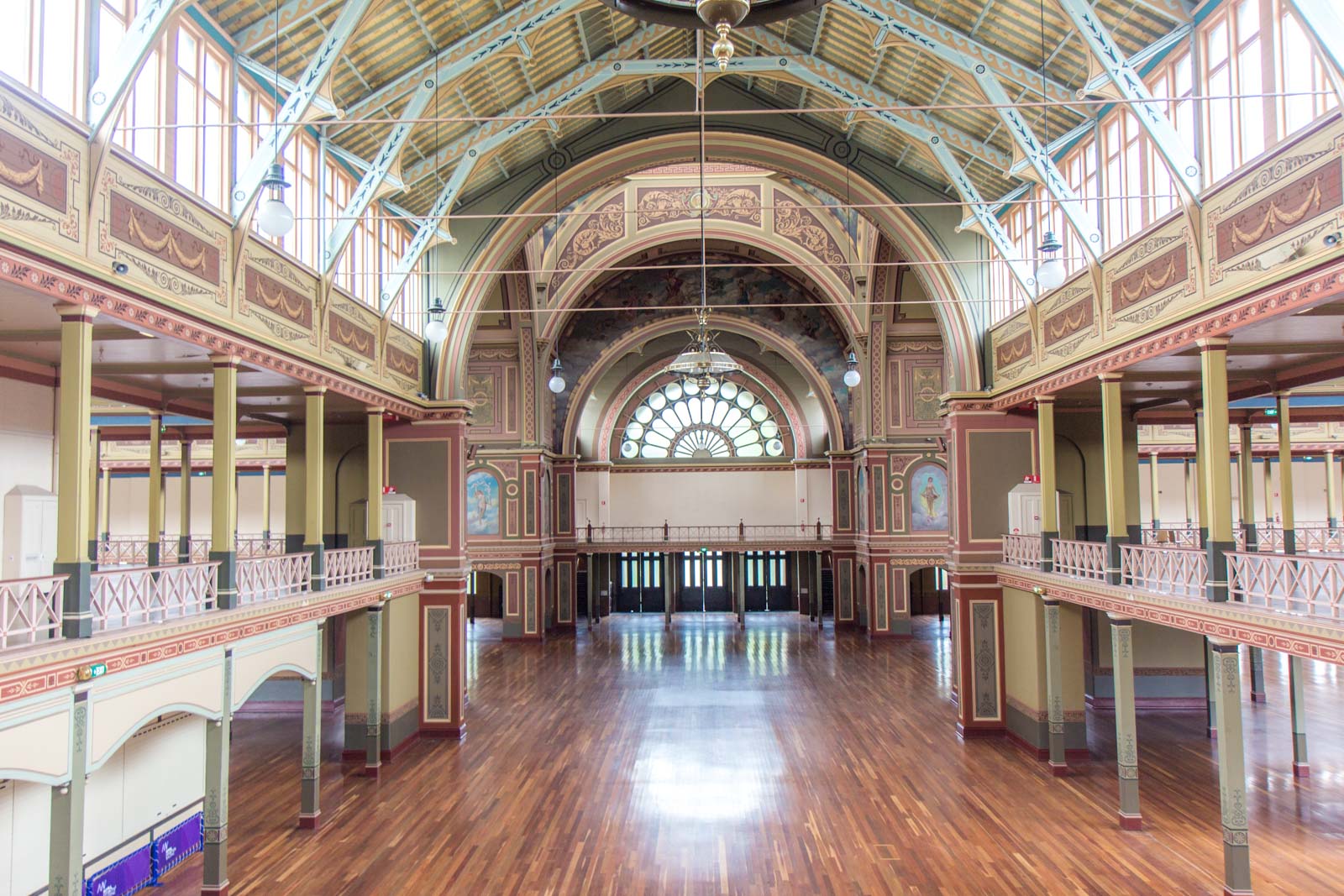 But, hang on. Didn’t I just say the first parliament was in the Royal Exhibition Building? Yes, it was, but this was simply for the ceremonial opening event. The Duke of Cornwall (later to become King George V) did the official honours in front of about 14,000 people who crammed into the building for the special moment. 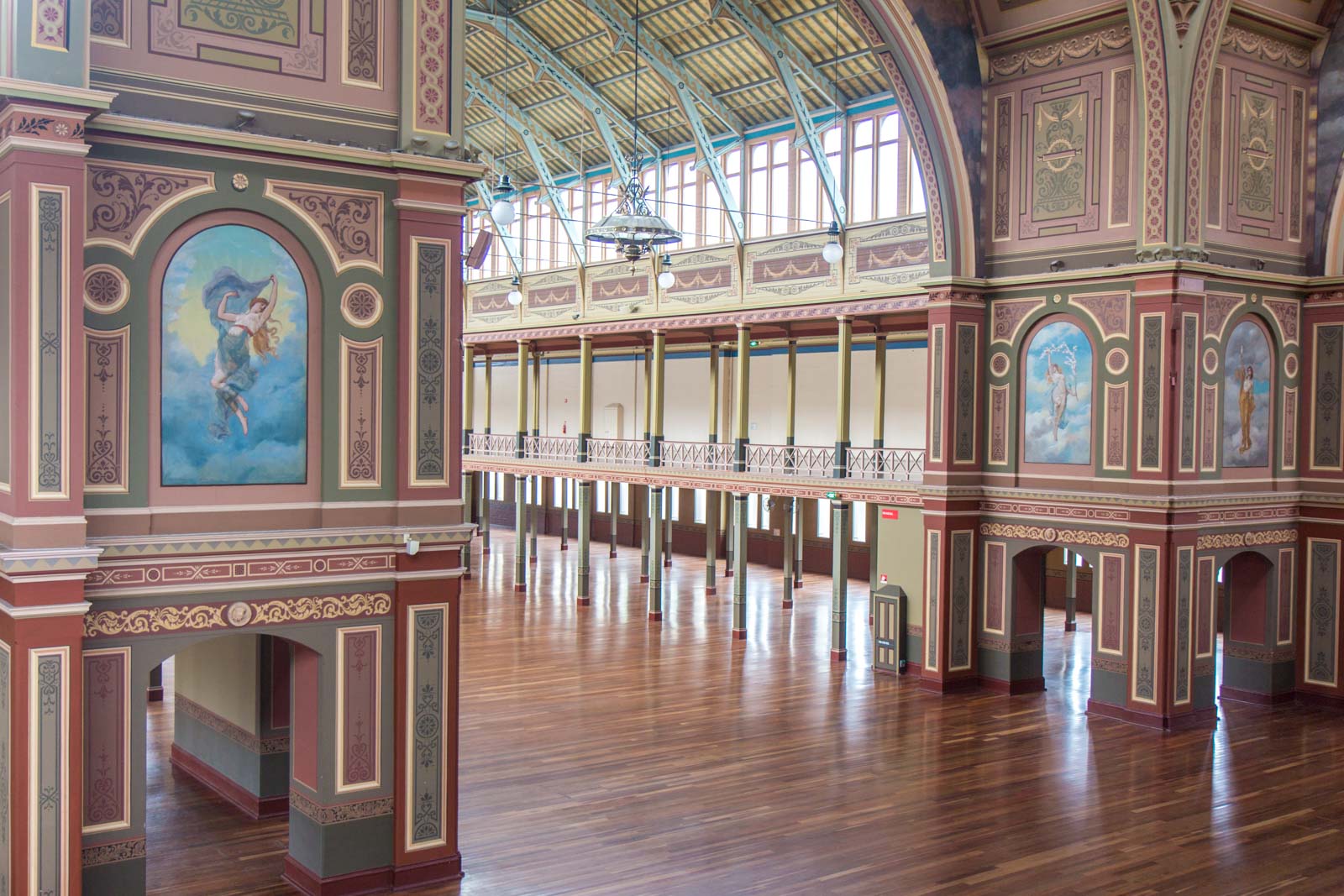 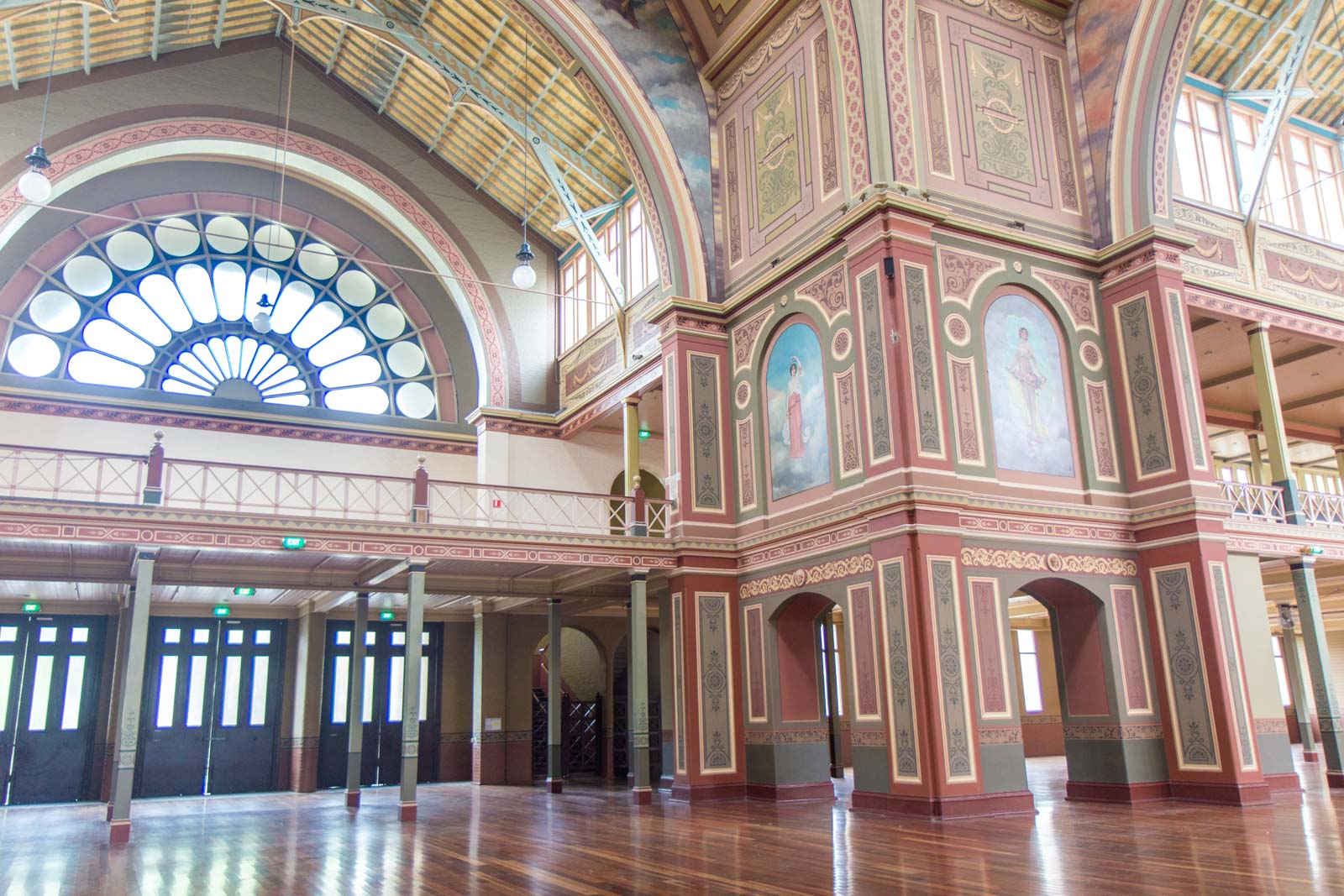 By this time, Melbourne had become a rich city. Gold had been found in quite a few parts of the Victorian colony and the wealth was flowing back into the capital. Another exhibition, The Centennial International Exhibition, was held in the building in 1888 to celebrate 100 years since the First Fleet arrived in Australia. It attracted even more visitors this time – 2 million people came – but it made a financial loss because so much had been spent to flaunt the riches of Victoria. 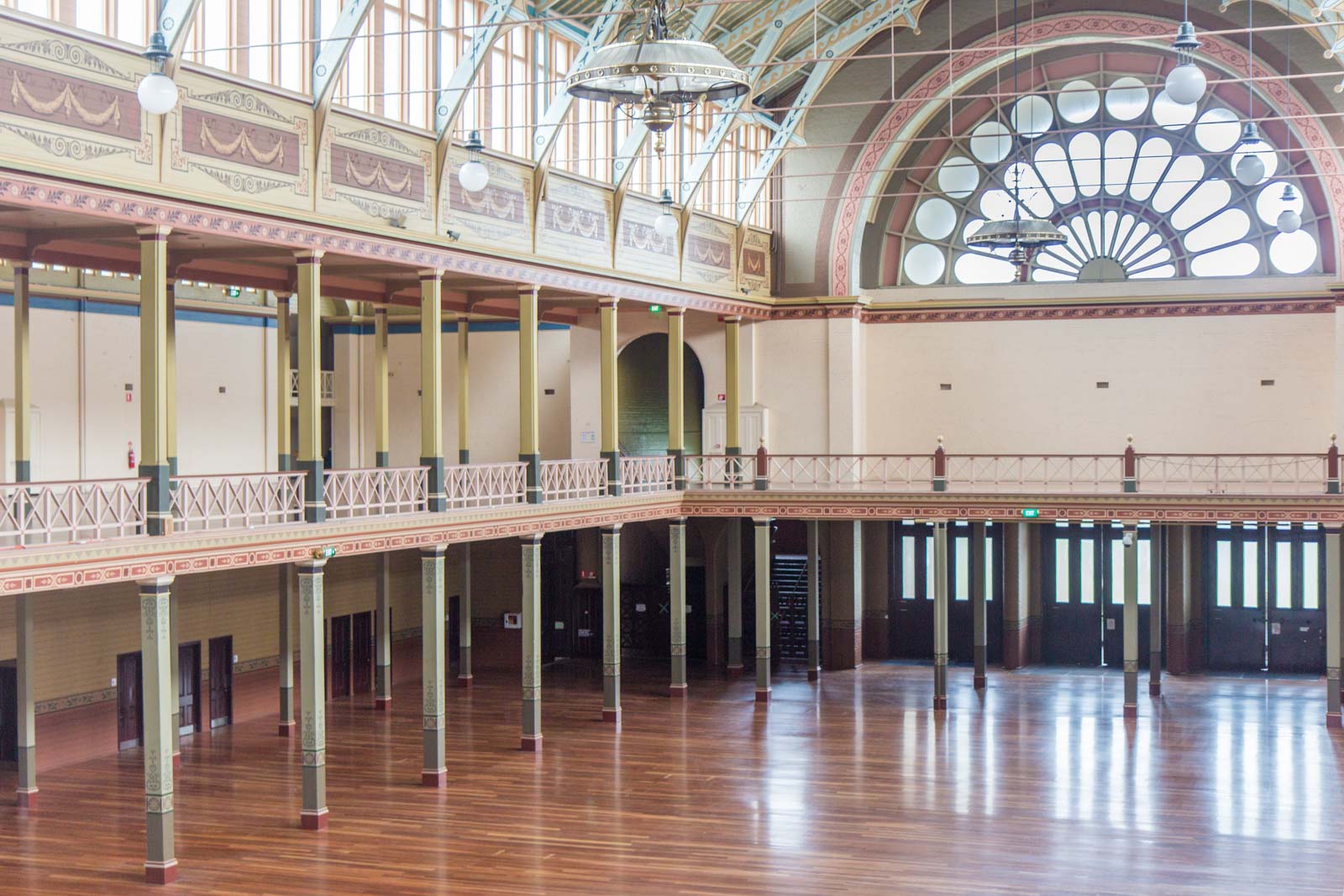 Even after the first parliament was opened here, the building was used for large public events. In fact, what makes the site so special, is that it is still used for its original purpose. There are regular fairs and exhibitions here – motor shows, flower festivals, fashion shows, art fairs, and so on. Almost every weekend it’s used for something. 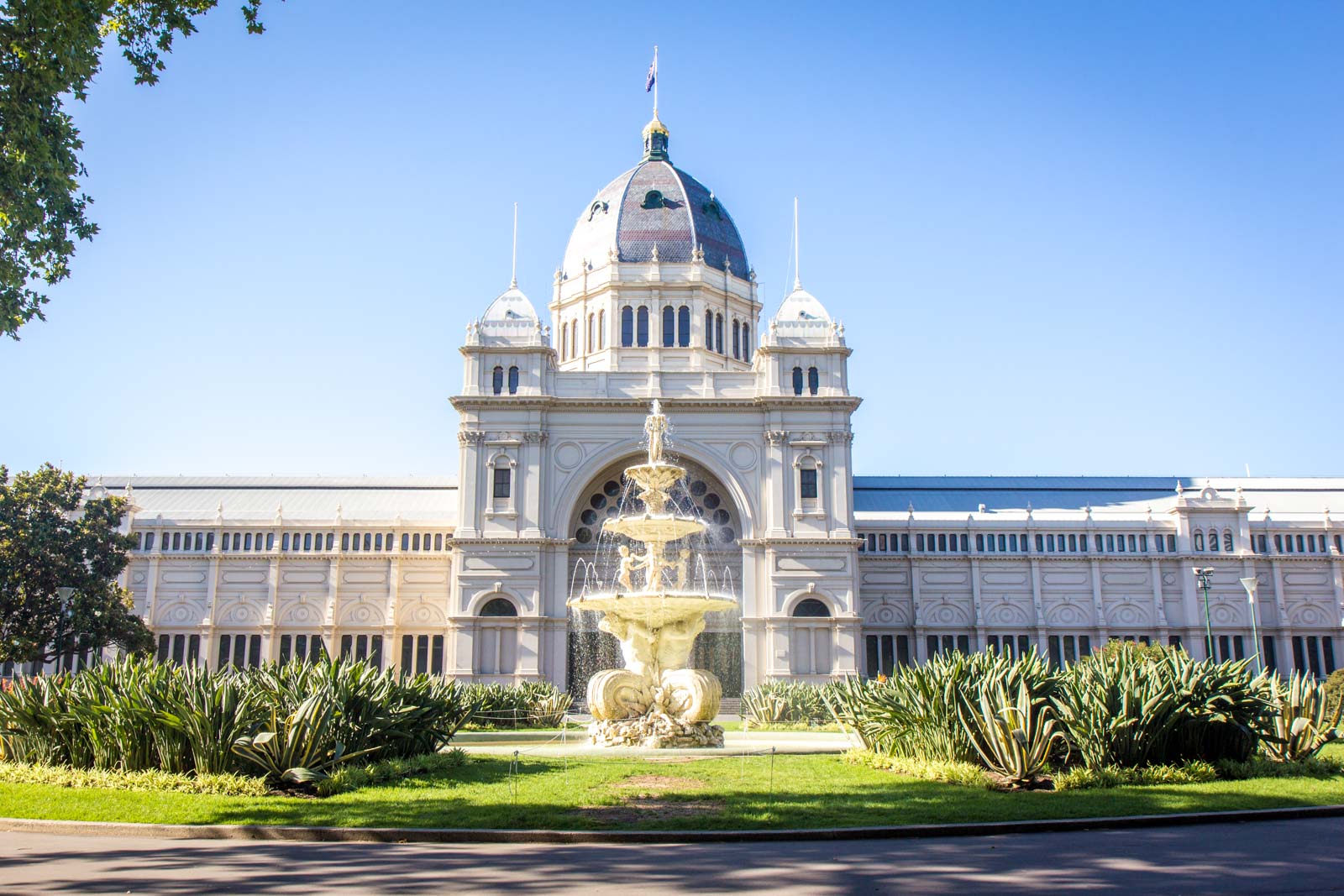 During the week, though, it’s often empty. That’s how it is when I go in. It’s a large empty space and my footsteps on the wooden floor echo slightly. But, empty of people and stalls, you can appreciate its beauty. And it really is a stunning structure. 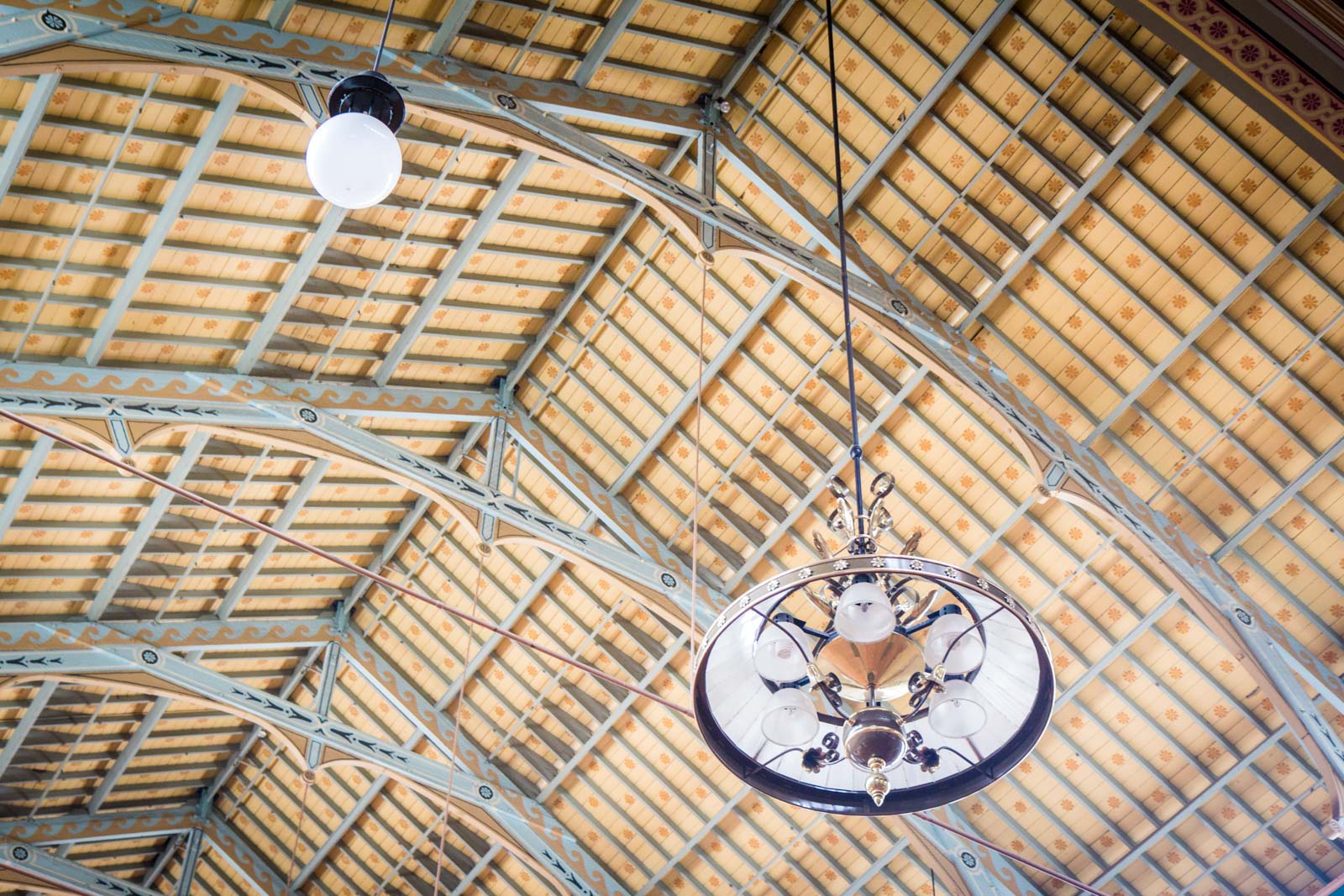 The Royal Exhibition Building is about 150 metres long and has high ceilings. Windows all around the upper level let in plenty of light and so the space is bright. Which is fortunate, because it makes it easy to see all the decoration. Over the years, there have been quite a few colour and design schemes of the interior but the current one is a restoration of how it looked in 1901 for parliament’s opening. The pastel yellows and blues give it a welcoming but official feel. In the centre, paintings on the walls and around the dome represent the virtues of a new Australia. 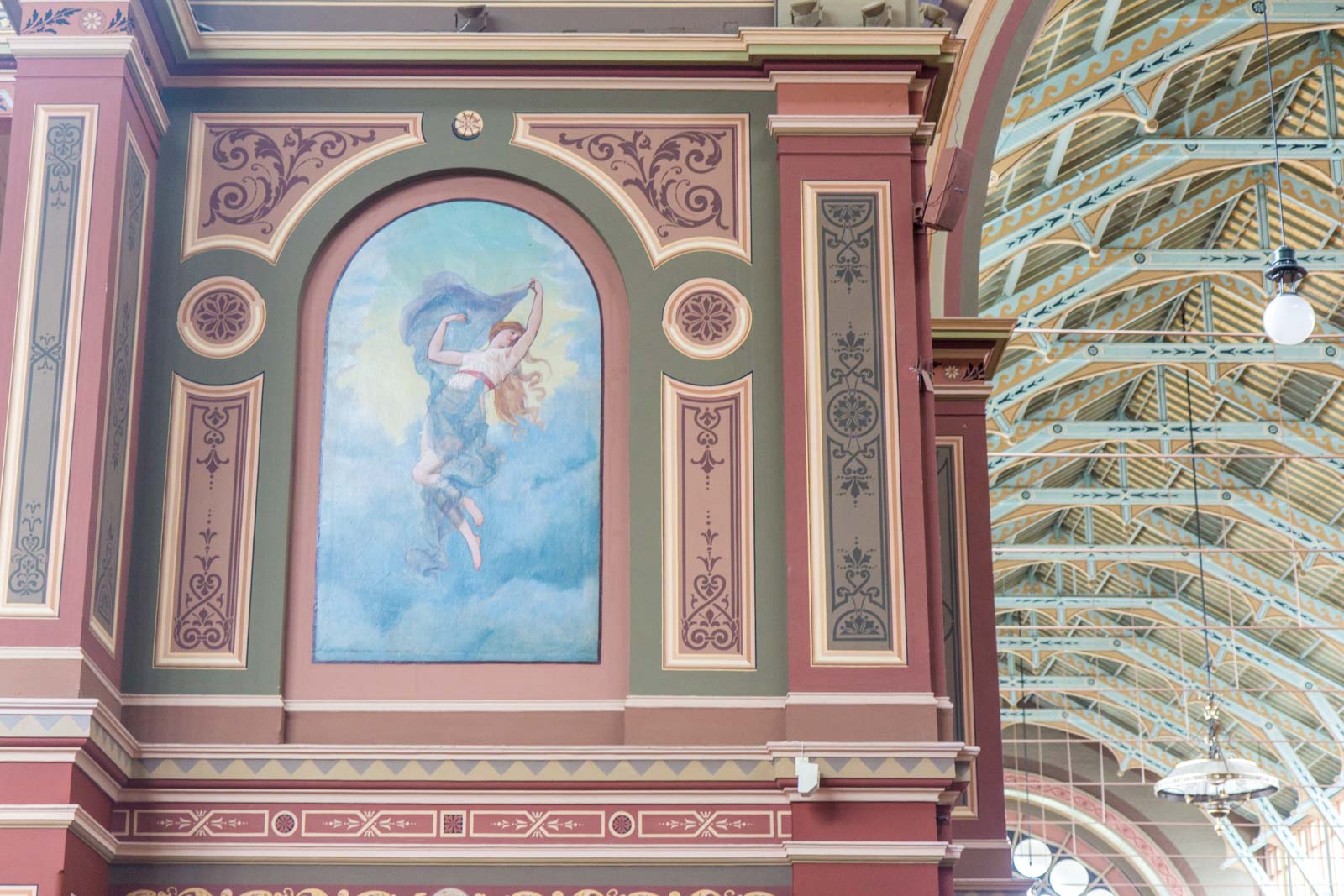 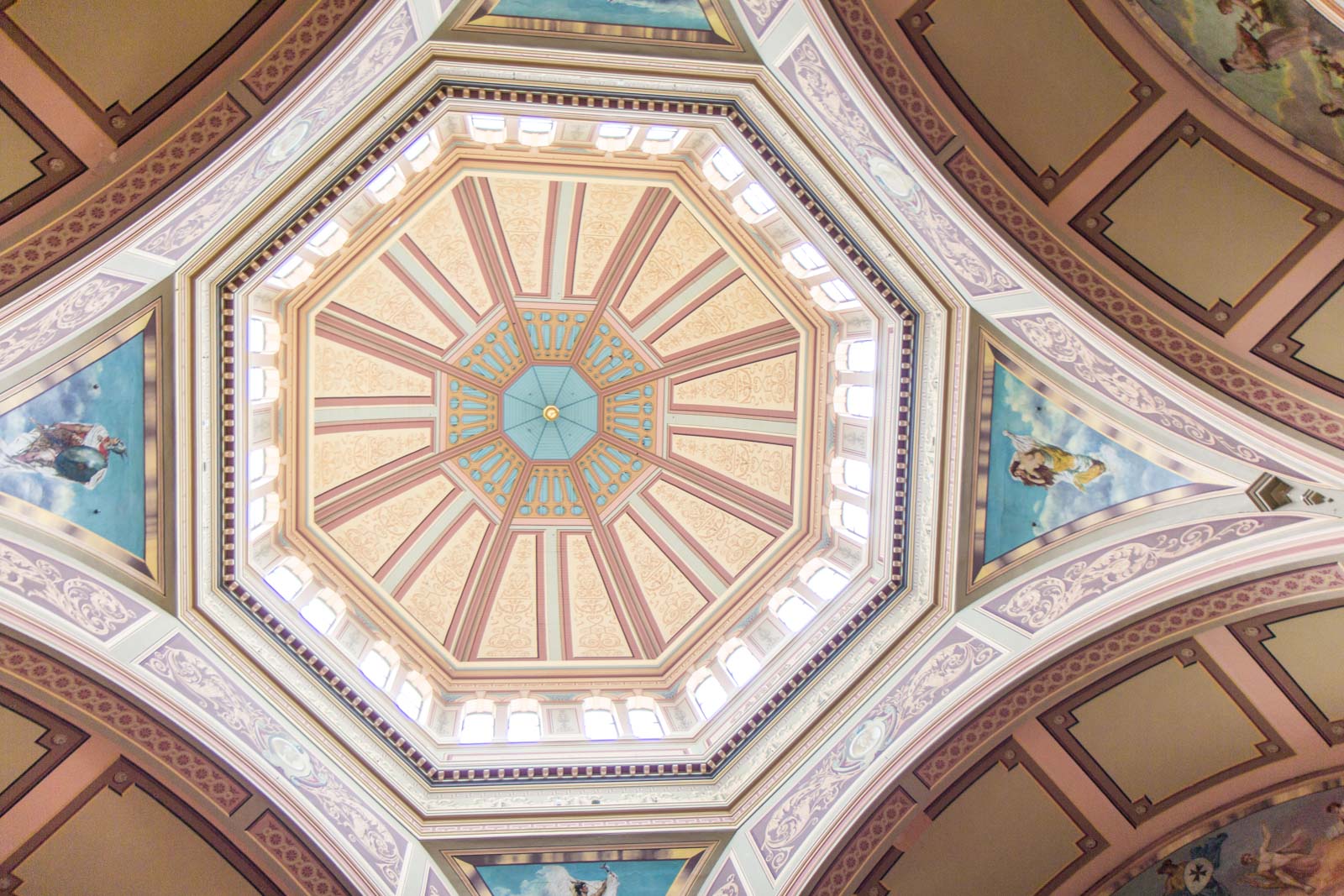 When there is no exhibition going on, the building isn’t open to the public except by guided tour. But, don’t worry, because it’s easy to go on a tour and it’s the best way to see it anyway. The site is managed by the Melbourne Museum, which is right next door. Most days there’s a tour at 2pm and it costs $10 for an adult. You can buy tickets at the museum. However, these details can change if there are events on, so it’s best to check the website. I’ve included the link below.

>> Details here on how you can visit the Royal Exhibition Building

Time Travel Turtle was supported by Tourism Victoria but the opinions, over-written descriptions and bad jokes are his own.