Inside the churches of the Italian city of Ravenna, the artworks that cover the spaces radiate colour. This is not accidental.

These religious buildings were being built around the 5th and 6th centuries and painting would normally have been the way to decorate a wall back then. There are certainly plenty of ancient frescoes around Italy for us to know what that looked like.

But the problem with painting is that it eventually fades. It needs to be restored or it loses its colours and its sharpness, becoming nothing more than a shadow of an image on a wall.

The people who were turning Ravenna into a magnificent Roman city didn’t want their religious art to fade, though. They wanted the vibrancy to be eternal. And so they turned to mosaics. 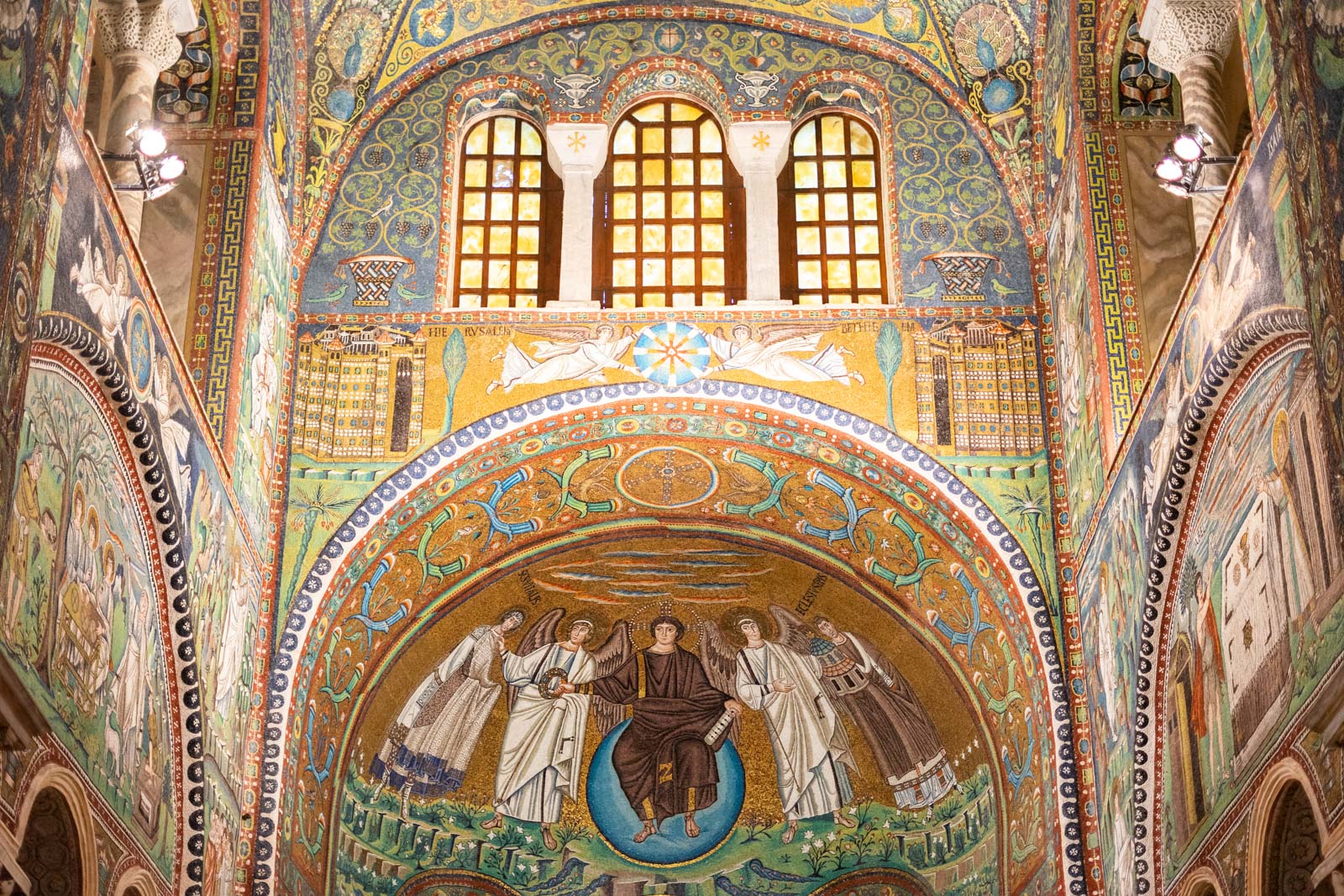 These mosaics were created using pieces of coloured glass. The way the glass was coloured means it won’t fade, so when the small pieces were stuck together on a wall or a ceiling, they created a scene that would stay that way for centuries.

I stand inside the Basilica of St Vitale, probably the most famous of Ravenna’s churches, and look up. The mosaics beam from every direction. They are over the whole apsis and altar area, on the triumphal arch, the vault, the dome, anywhere I look. 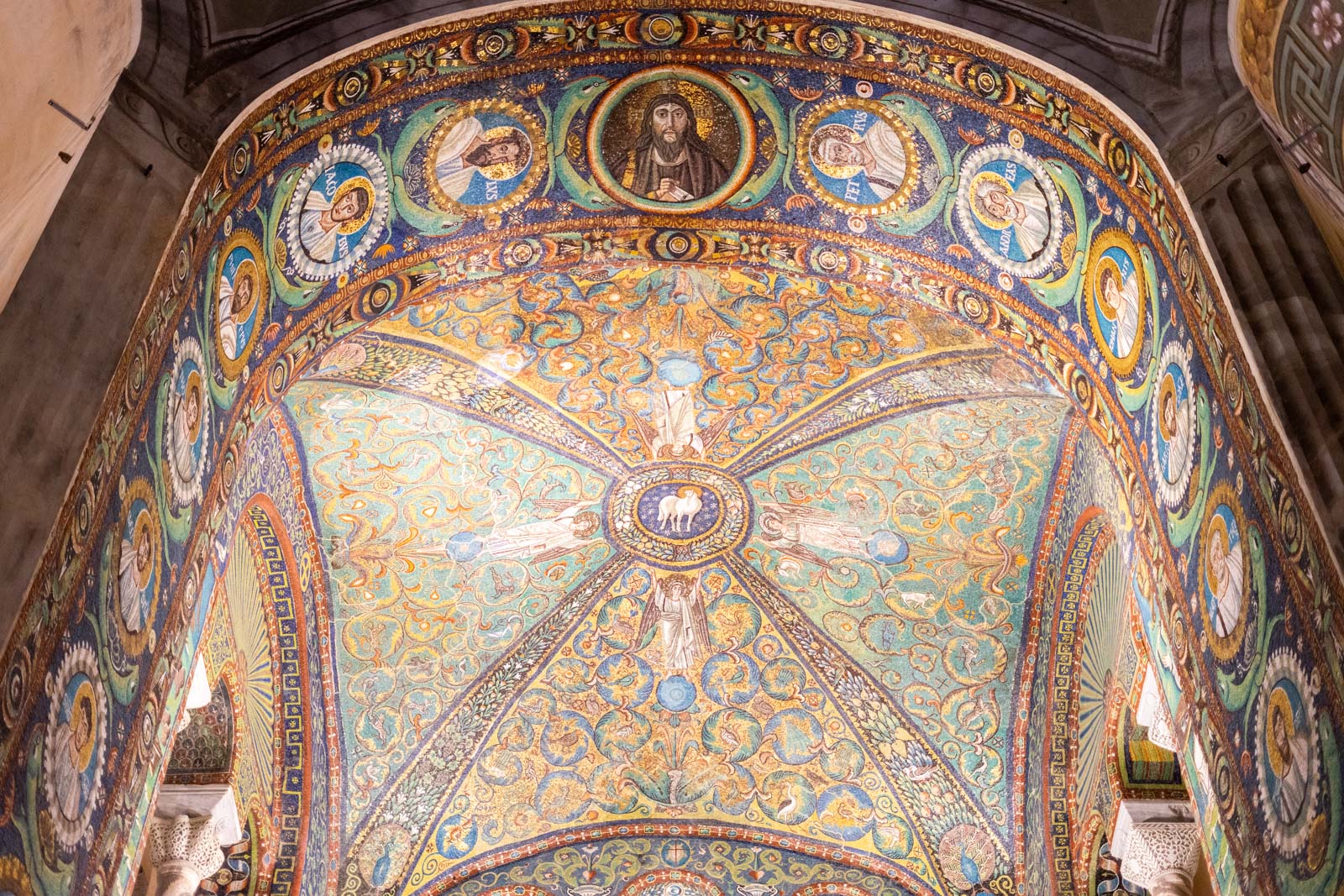 They are not just dramatic in their colour spectrum, they also have amazing detail in the design. The faces of the apostles are so sharp and realistic, it’s hard to imagine they were created by an artist using tiny pieces of glass.

The patterns are bold and give the interior a sense of life, of consciousness, as if it is a shimmering facsimile of the heavens or a magical projection under the canopy of a forest. How you will feel here will be different for every person, but I find it hard to imagine that you won’t be moved in some way. And, of course, that is the point.

These mosaics in Ravenna, most created about 1500 years ago, were meant to inspire but also to educate.

They were artistic representations of the people and events that the religious leaders were talking about in their sermons. A priest could point to a scene from the life of Abraham as he explained the story to the congregation. But, like most of the religious history at this period of time (perhaps always?), it was intertwined with politics. You’ll also find mosaics of political leaders and the events related to them and their empires.

In the Basilica of St Vitale, for example, you’ll find a mosaics of Emperor Justinian I and his wife Theodora as the rulers of Ravenna, even though they never actually visited the city. There are quite a few artworks like this throughout the city. 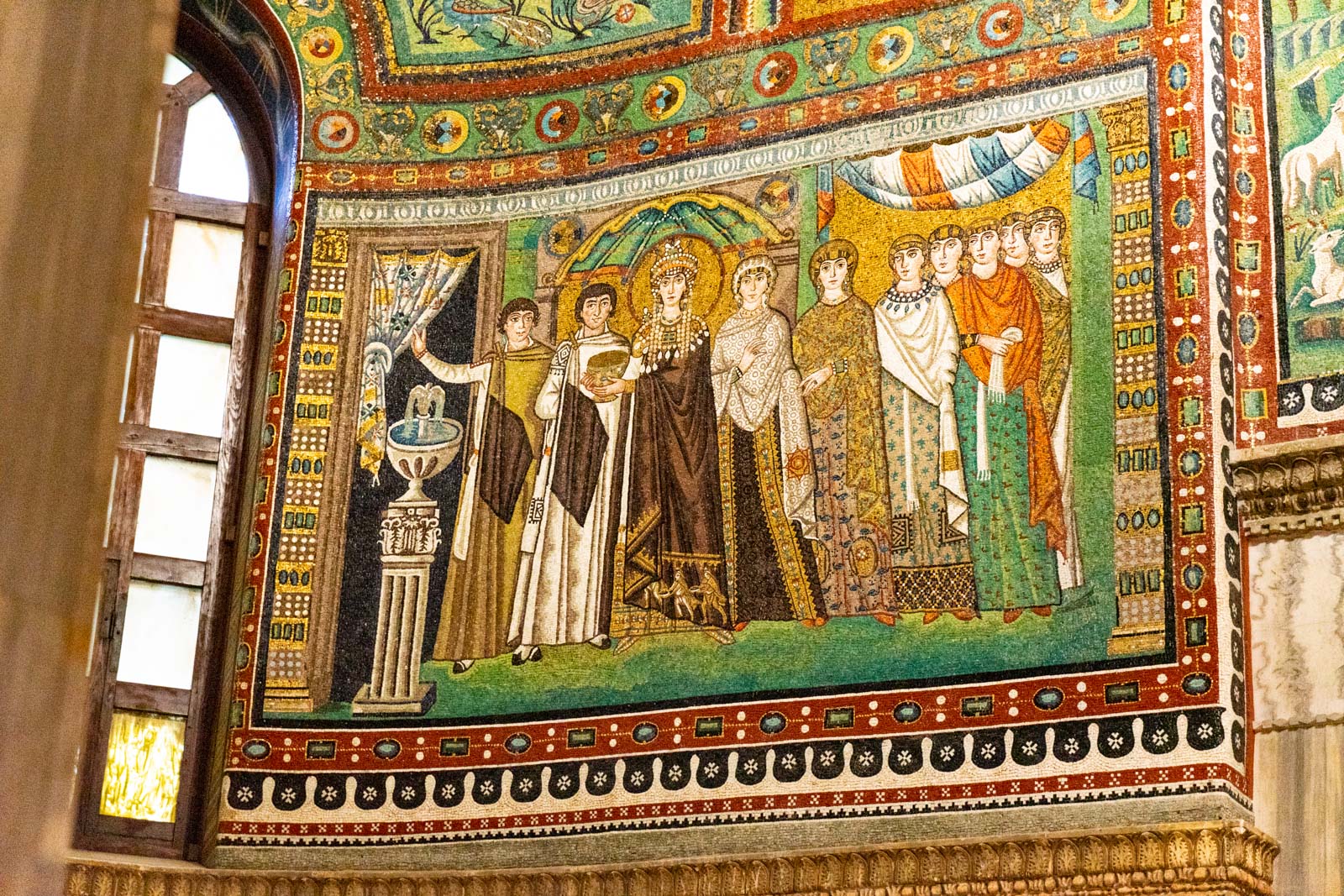 One of the reasons that you find faith, fact, and fiction mixed together like this is because Ravenna was once an extremely important city. It was the seat of the Roman Empire in the 5th century and the of Byzantine Italy until the 8th century.

This meant that there was a desire to make the city and its monuments magnificent, but also to leave a legacy of particular individuals here, immortalised in artwork that will never fade.

It also means you get an incredible blend of styles because of the different ruling empires and the city’s position as a trading centre. As you look through the different churches, you’ll see a blend of Graeco-Roman design, Christian iconography, and oriental and Western styles. The mosaics are the largest and best preserved Byzantine mosaics outside of Istanbul, and some of the most important artworks from this period of history in Europe. The styles of design and architecture were incredible influential on other religious buildings across Italy and other parts of the continent for centuries.

Visiting the mosaics of Ravenna

When you’re visiting Ravenna, you’ll probably want to see some of the mosaics. Ravenna is a charming little city and has quite a few things to do – but it’s the artworks that are the highlight (and certainly worth the time if you’re already in the Emilia-Romagna region).

If you’re wondering where to start with visiting the mosaics of Ravenna, UNESCO has already done some of the work for you. They have listed eight different locations as part of a World Heritage Site, and these represent the best of the Ravenna mosaics. 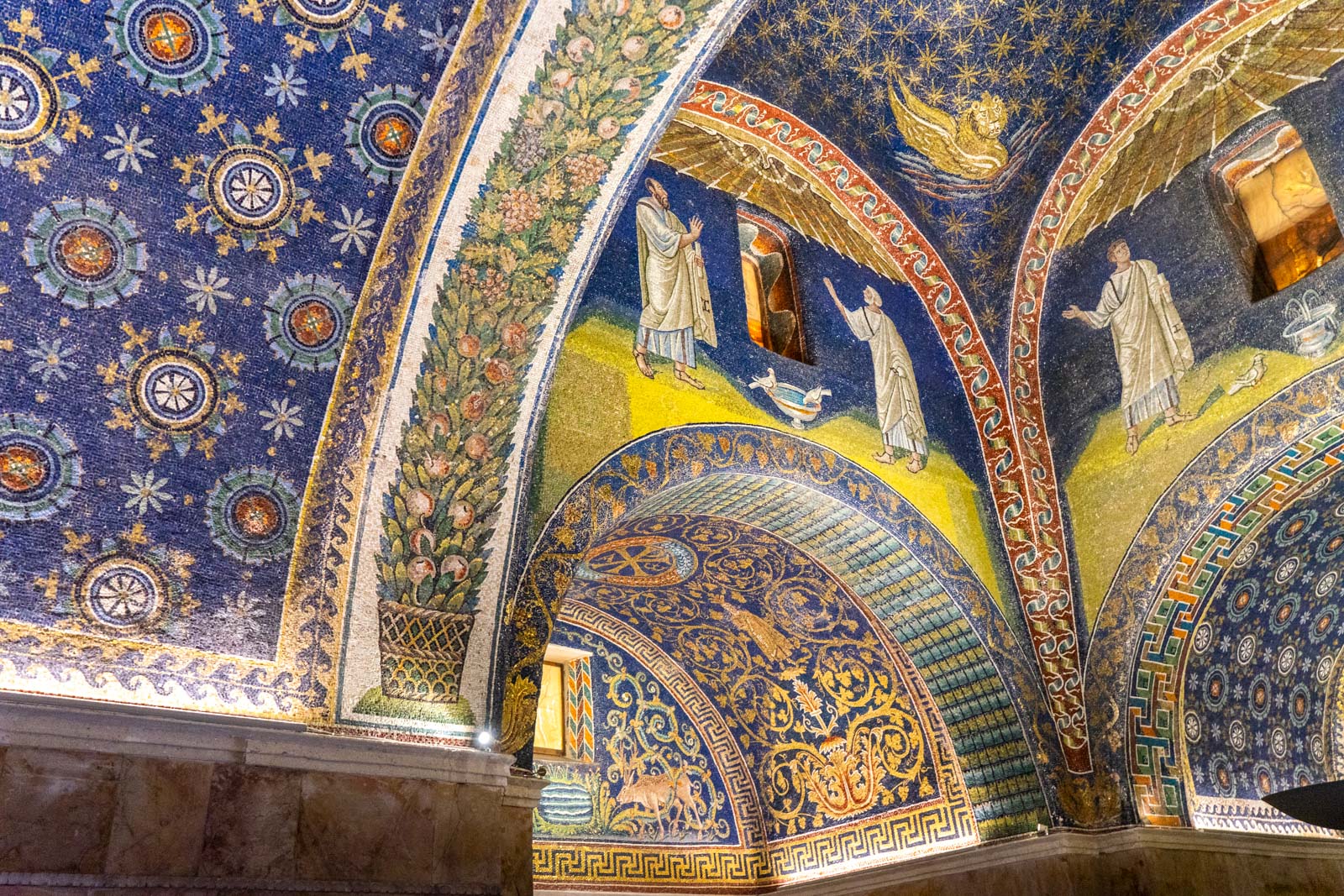 I have marked on a map here where each of them are. You’ll see that seven of them are in the city centre and are very easy to access. The other one is slightly out of town but is worth the effort, as I’ll explain in a moment.

While there are some consistent styles across the eight locations in Ravenna’s World Heritage Site, each of the locations has its own special attributes. It’s not just that there is a variety in the actual artworks, you’ll also realise that each building is trying to achieve something different. 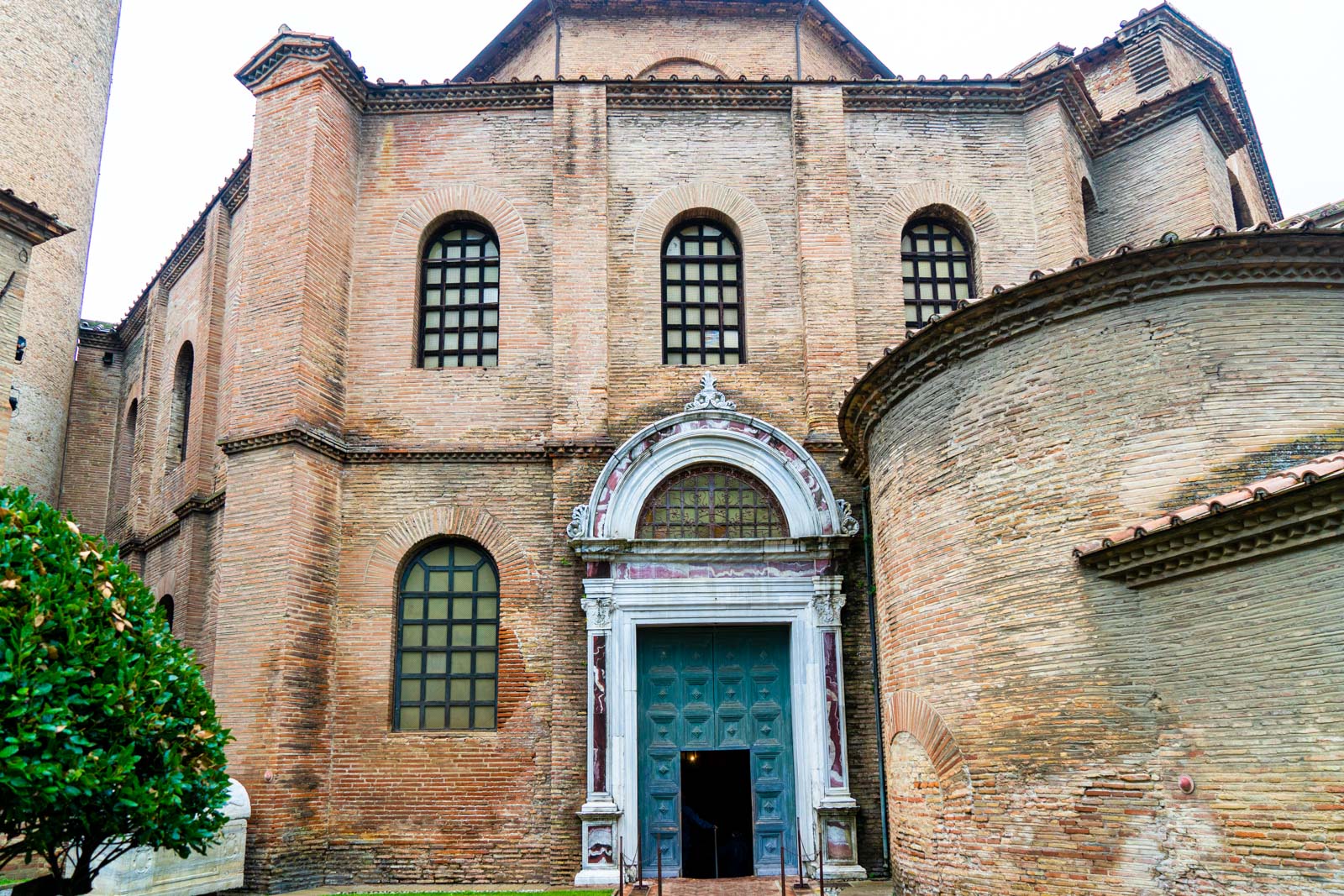 The Basilica of St Vitale, for instance, is trying to awe a congregation with the sheer volume of exquisite mosaics, while the Mausoleum of Galla Placidia is about honouring a single person.

At the Basilica of St Apollinare in Classe, the enormous church is imposing for its architecture alone, but the main mosaic here acts as a colourful backdrop for the altar, drawing in the focus. 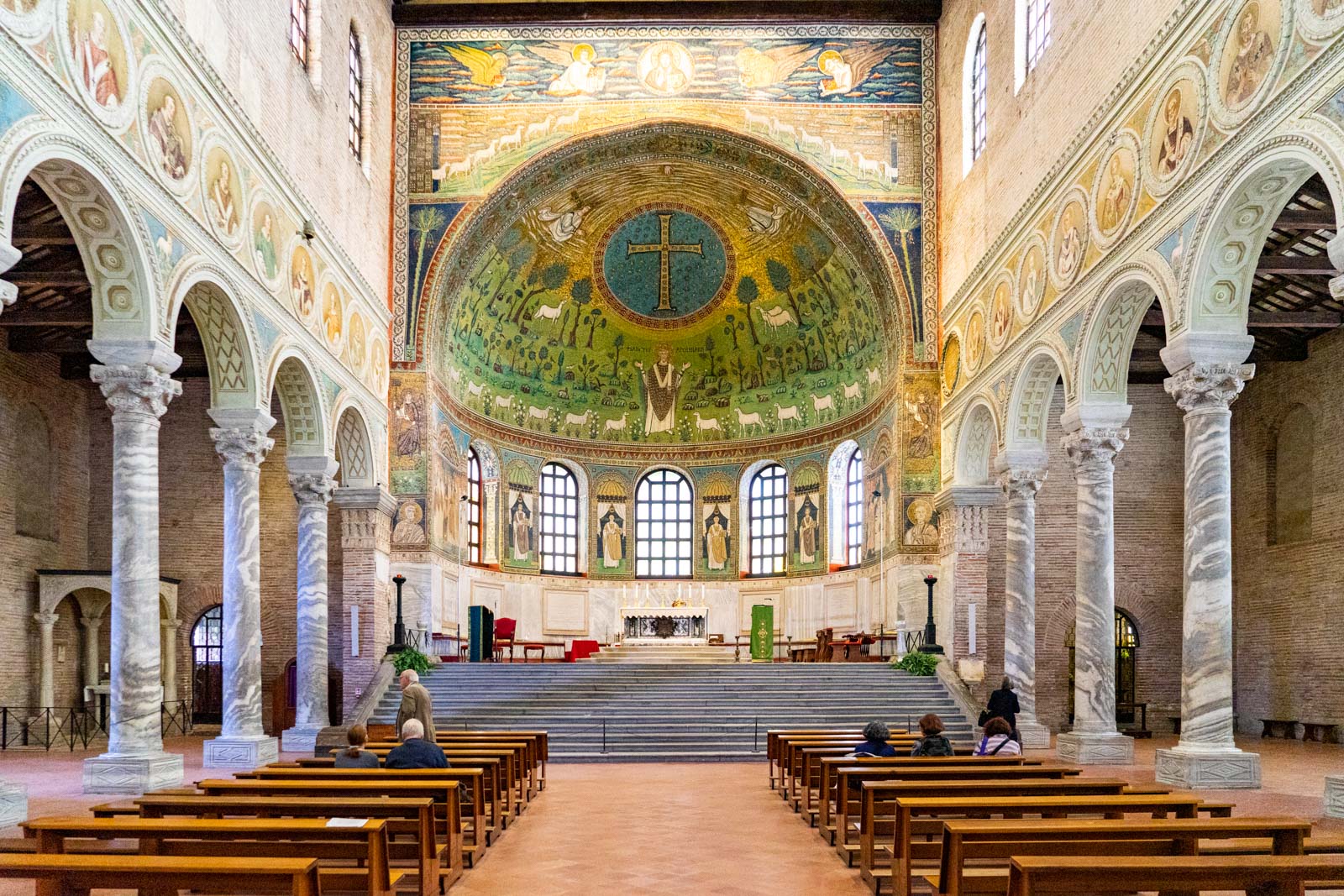 Here, just briefly, is what you should expect at each of the eight locations that show the best of Ravenna’s mosaic art.

I’ve already told you quite a lot of about the mosaics in the Basilica of St Vitale, which was consecrated in 548 AD is probably the most impressive of the sites. But it’s also worth mentioning that the architecture is very interesting, with the centre shaped like an octagon and rising up through different levels. 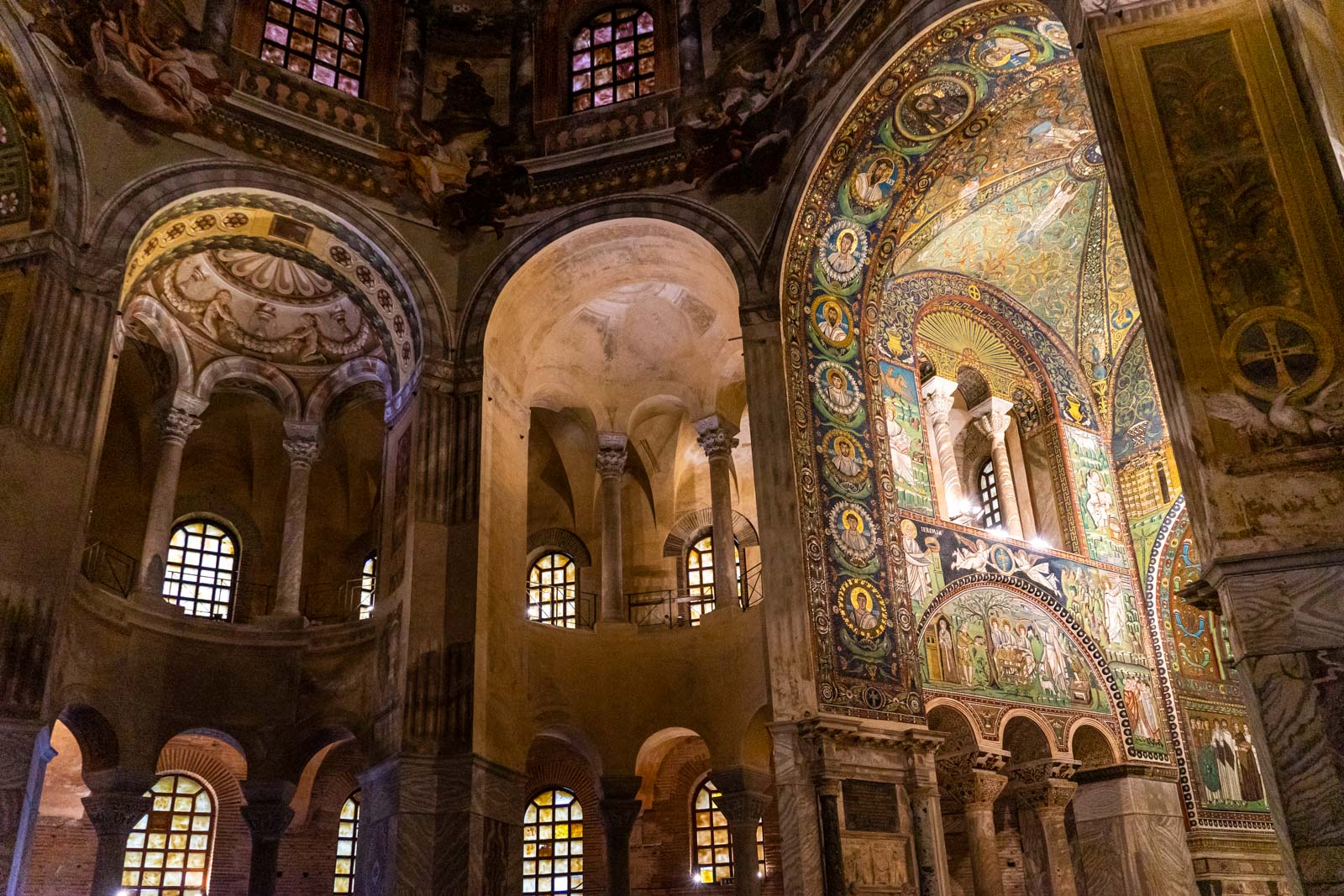 When you look at the artwork, take note of all the gold that is blended in with the colourful mosaics. It gives the whole church a sense that it’s glowing, even though it doesn’t have too many windows to let in the sun.

Behind the Basilica of St Vitale, you’ll find the Mausoleum of Galla Placidia. It’s a small unassuming building from around 450 AD, but inside is one of the best examples of mosaic work.

The upper walls are covered in mosaics, with themes from different traditions representing scenes about the victory of eternal life over death. 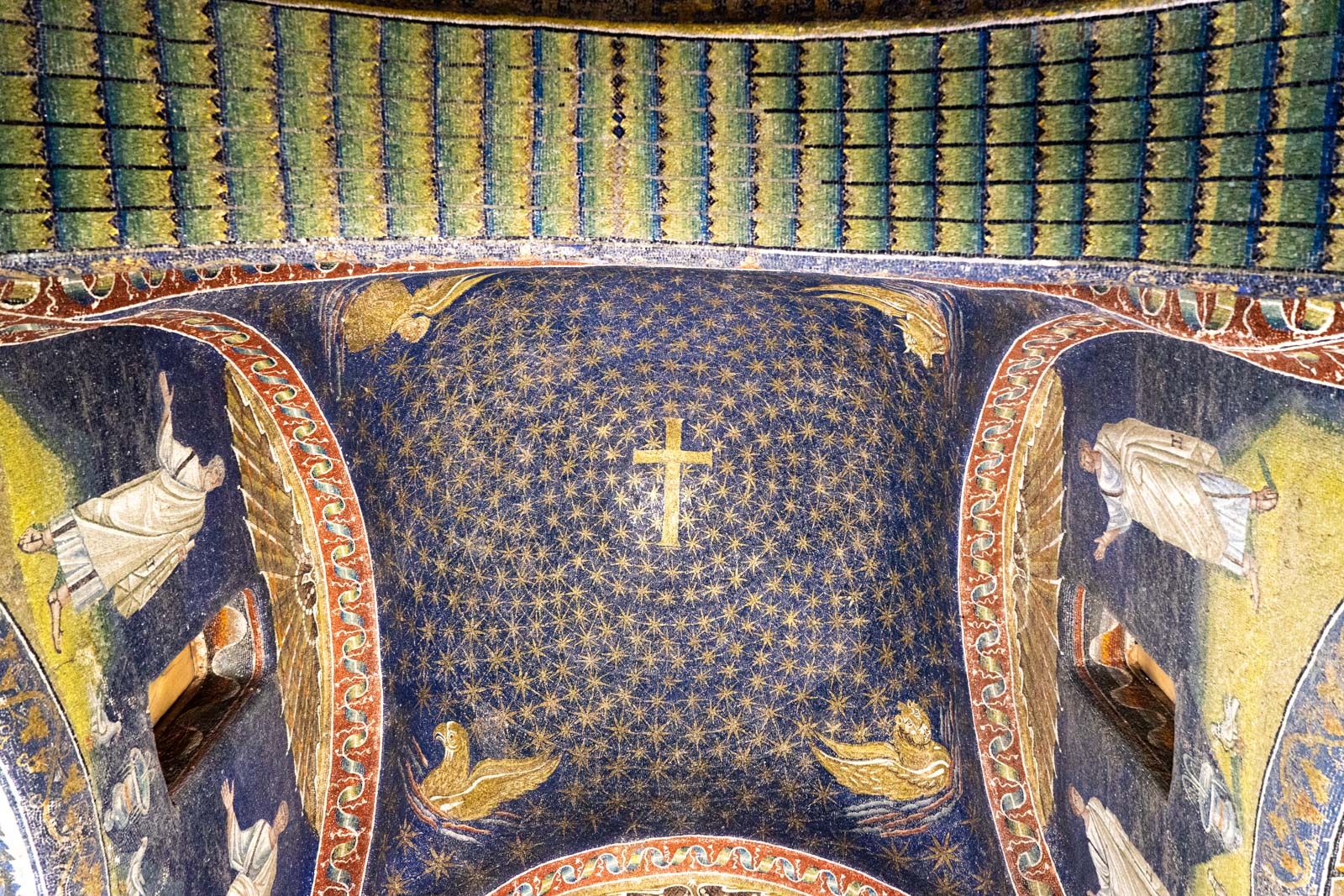 The most famous part of the ceiling that is decorated with golden stars on a blue background. It’s said that the famous American songwriter Cole Porter visited the mausoleum and it inspired him to compose his hit ‘Night and Day’.

The Neonian Bapistry is one of the oldest of the monuments in Ravenna, built at the start of the 4th century, with the interior artworks done later in the century.

It’s a relatively small building but the mosaics on the higher level are quite spectacular. The most striking one is at the centre of the dome, with a large medallion surrounding a scene of the Baptism of Christ. Images of the twelve apostles surround the image.

The mosaics in the Archiepiscopal Chapel are a good example of how the religious art of this time was often not neutral and was used to advance a particular ideology.

The images here aim to glorify Jesus from an anti-Arian perspective, to counteract a philosophy at the time that was going against the traditional idea of the Holy Trinity. In other words, they show Christ as a warrior and have all of his supported in very dominant positions.

The Basilica of St Apollinare Nuovo was built at the beginning of the 6th century but has the name ‘nuovo’ (new, in English) because it was renamed in honour of Saint Apollinaris later on. From the outside, it has interesting architecture with the marble porch and the 10th-century bell tower.

Inside, the most important mosaics are the 26 different scenes showing the story of Christ. They’re not just beautifully made, but they are probably the oldest mosaic work of the New Testament in the world.

A lot of the decoration that would once have been inside the Arian Baptistry, like stucco artworks, haven’t survived but the mosaics in the cupola more than make up for it. The highlight is the scene of the Baptism of Christ, where you can see his naked body immersed in the water.

Again, the iconography here is intentionally designed to promote the Arian theory of Christianity, and you can see that in the large throne decorated in gems and topped by a cross.

The mausoleum was built by Theodoric, the king of the Ostrogoths and Visigoths, as his burial place. It is a distinctive building made of white stone that has two levels with a dome on the top.

Although it’s included in the World Heritage Site, it actually doesn’t have any mosaics so seems like the odd one out. It has been included on the list mainly because of its significance as the only remaining tomb of a barbarian king from this period.

Basilica of St Apollinare in Classe

You’ll find the Basilica of St Apollinare in Classe about eight kilometres from the centre of Ravenna, but it’s definitely worth travelling out to see it. I think this is the second-most spectacular location on the list (after the Basilica of St Vitale).

The large space feels very light, with the high windows letting in a lot of sun. It brings a joyous atmosphere to the beautiful polychrome apse mosaics, that project a natural scene with plants and animals. 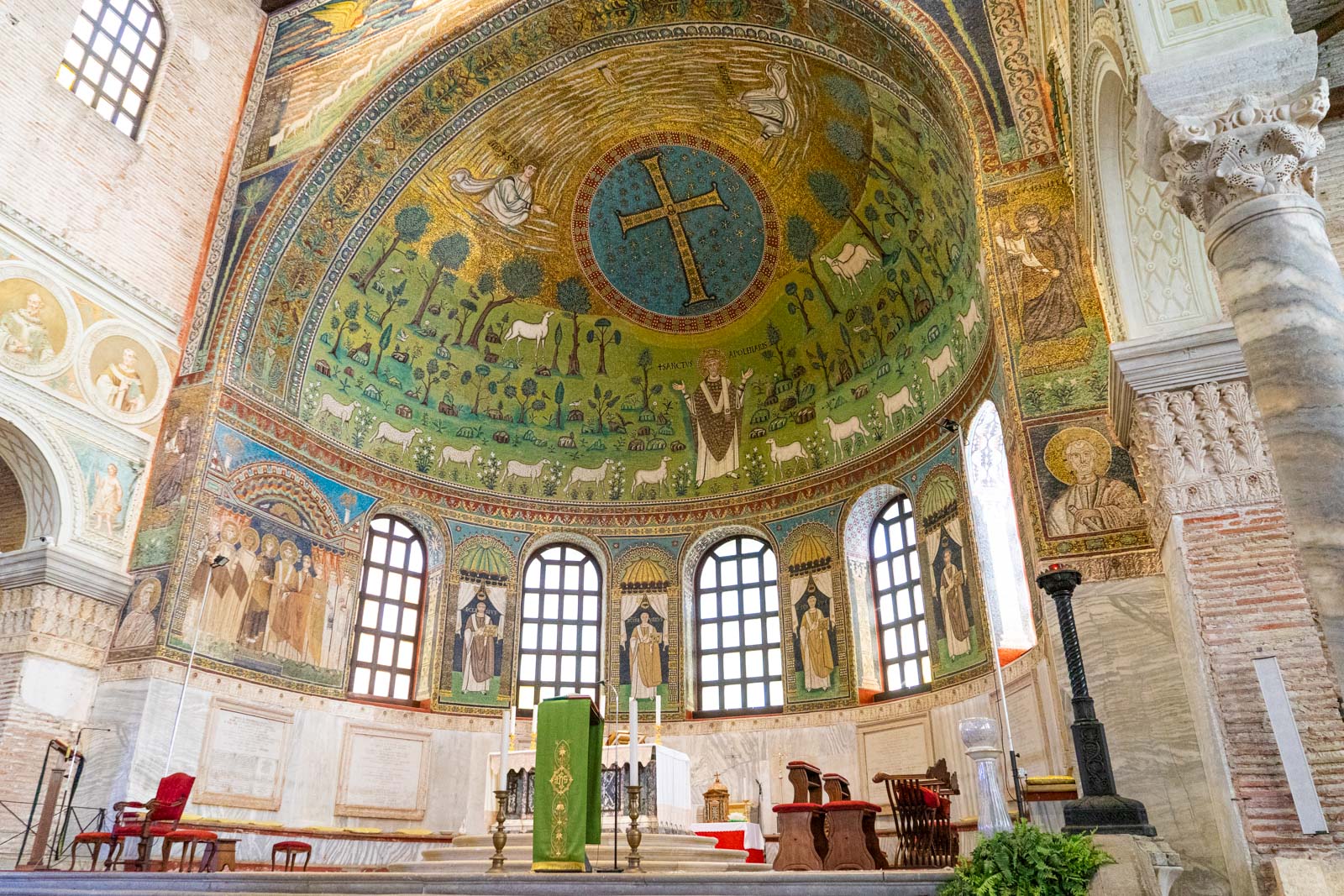 Above the green valley, is the enclosed disc with a starry sky and cross inside. Over it is the hand of God protruding from the clouds. It’s a dramatic scene and a masterpiece of Byzantine art.

How much does it cost to visit the Ravenna mosaics?

When it comes to buying tickets to see the Ravenna mosaics, there are a few things you need to know.

Firstly, you can buy a combined ticket to see five of the locations in the centre of Ravenna. For €9.50 for full price (and €8.50 for concession) you will get access to:

For the other locations, you can buy individual entrance tickets. The costs are:

You can also buy a combined ticket for the Mausoleum of Theoderic, Basilica of St Apollinare in Classe, and the Ravenna National Museum for €10, which is good value if you want to visit all three places.

While you’re in Ravenna, I would also recommend visiting the studio of Luca Barberini, a local artist who take a modern approach to mosaic art. He creates some pretty amazing works and it’s interesting to see how the tradition has evolved.

>> Read my story about modern mosaics

Time Travel Turtle was a guest of Emilia Romagna Tourism but the opinions, over-written descriptions and bad jokes are his own. 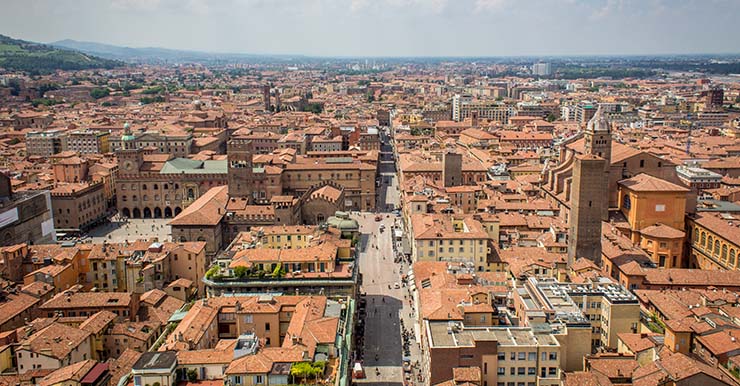 WANT TO KNOW MORE ABOUT EMILIA-ROMAGNA?

To help you plan your trip to Emilia-Romagna:

You may also want to consider taking a tour in Italy, rather than organising everything on your own. It’s also a nice way to have company if you are travelling solo.

I am a ‘Wanderer’ with G Adventures and they have great tours of Italy.