This fascinating Antwerp museum about the history of printing is also on the World Heritage List. A visit to the Plantin-Moretus Museum tells a universal story, still relevant today.

In the era of modern media, content is everywhere. So much, it’s sometimes hard to find something meaningful.

The internet and social networks can sometimes feel like they’re full of white noise.

There’s no barrier to entry. Anyone can be a publisher these days. With a few clicks, you can create a social profile, set up a blog, or submit an article to an established website.

It’s cheap, if not free. Words and images have been devalued in their basic form.

This is not necessarily a bad thing. It allows people like me to create this blog for you; it lets ordinary people in extraordinary situations share their stories with the world; it democratises the flow of information.

But go back a few decades and this wasn’t the case. There was a cost to publishing and so, for economic reasons, the quality of content was assessed before it made it to the page or the screen.

So just imagine what the situation was like 440 years ago. This was the year that Christophe Plantin established his printing company in the Belgian city of Antwerp.

Today, the headquarters are a historic site, the Plantin-Moretus Museum, home to the world’s oldest printing presses, also known as the Plantin Press.

Before the 16th century, there was no glut of content. It wasn’t just the cost of producing it that was an obstacle, it was the practicality of it.

The only way to create books, for example, was to write out each one by hand. Weeks of work and you reach just the one person who owns it. So different to today when, with a minute on the computer, you can reach millions.

This is way the developments at the Plantin-Moretus Workshops changed the world. Using type from Paris, the company created printing presses that could make multiple copies of the same book at speeds never seen before.

It looks basic by today’s standards but it revolutionised the written word back then. Suddenly books became cheaper and much more available.

When you visit the Platin Museum in Antwerp, there are a few different elements to explore.

The first is the building itself, which is architecturally significant. Inside, you’ll also find the living quarters of the family – grand rooms filled with collectables and less lavish areas for the staff.

It’s worth taking note of a small room on one side of the house which looks like a quaint old bookstore. In fact, it is, and the company sold books from here directly to people on the street.

A highlight is stepping into the Great Library. This was designed like a private humanist library of the 17th century with busts, globes and paintings decorating the areas not taken up with books.

Although the collection of books here has been expanded since the library was created, it’s still an authentic representation.

Of course, the main attraction of the museum is the printing press workshop and associated exhibits. Christophe Plantin turned his company into the largest typographical business in Europe in the 16th century. (When he died, Jan Moretus took it over and continued the excellent work.)

Let me give you some figures to show what that means.

During his 34 years as a printer and publisher, Plantin produced 1887 major publications (not including things like leaflets and posters, of which there were another 600 or so).

That means his company printed an average of 55 publications each year. So, each week he was basically producing a new book – and each of them had a run of about 1000 copies.

If a book was particularly popular, he would do about 2500 copies. The most popular of all was a Hebrew Bible in 1566 that was printed 7800 times.

These are the things you learn as you walk through the museum, spread out over two levels and across annexes in the workshops and home of this fascinating family.

I would highly recommend getting the audioguide for your visit, to make sure you appreciate the significance of each room. It’s well put together and informative.

And when you get to the room full of printing presses, perhaps with a staff member doing a demonstration for a school group, stop for a moment and think about what was once created here.

Content that mattered, that took time to write and took time to publish. It was not gone in a flash, it was treasured. And still is.

Where is the Plantin-Moretus Museum?

The Plantin-Moretus Museum is in the centre of Antwerp. The address is Vrijdagmarkt 22 2000 Antwerp, Belgium.

How do you get to the Plantin-Moretus Museum?

When is the Plantin-Moretus Museum open?

The museum is also closed on the following holidays: 1 January, 1 May, Ascension Day, 1 November, 25 December.

How much does it cost to visit the Plantin-Moretus Museum?

A standard ticket costs €8. A concession ticket is €6.
Admission is free for visitors under 12 years of age.

The museum is free for everyone on the last Wednesday of the month.

If you’re looking for more information, you can find it on the museum’s official website.

There are lots of other things to see in Antwerp, other than just the Plantin-Moretus Museum. I would recommend staying for a couple of days and seeing some other Antwerp museums and sights.

Here are a few tours that will show you some of the other heritage parts of Antwerp.

Also, if you need a recommendation for accommodation, I’ve got some options here:

THE BEST ACCOMMODATION IN ANTWERP

Antwerp is a popular city for tourists, so there is a good range of accommodation available

For a backpacker option, I would recommend the Kabas Hostel, with a large and friendly common area.

If you’re looking for a budget hotel, Beaux ARTS is in a cool hipster area and has nice comfortable rooms.

A cool hotel with a rock and roll theme is the Rock Lobster City Lodge.

And for an absolutely spectacular luxury experience, you can’t go past the Gulde Schoen The Suite Hotel! 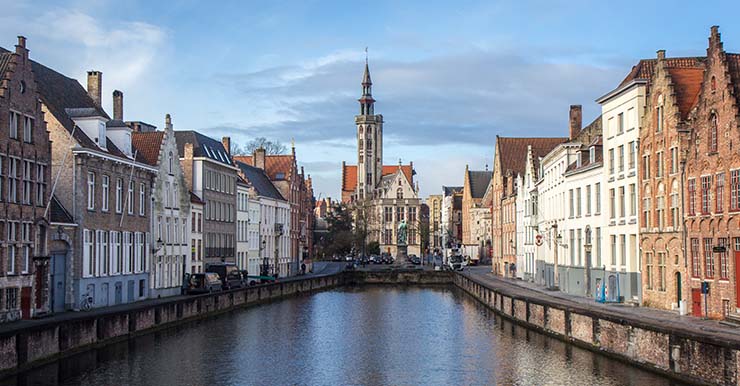