The Mayan ruins of Palenque, Mexico

The great temples and pyramids at Palenque has stood for more than 1000 years, but it was only recently that their biggest secret was revealed.

This Ancient Mayan city was probably not one of the biggest of the civilisation, but it was one of the most architecturally impressive. The enormous structures constructed at Palenque – most around the 7th century AD – are absolute treasures and have attracted many archaeologists over the years.

But most of these archaeologists explored the Palenque ruins and did their research without realising that the most important thing at the site was right under their nose. 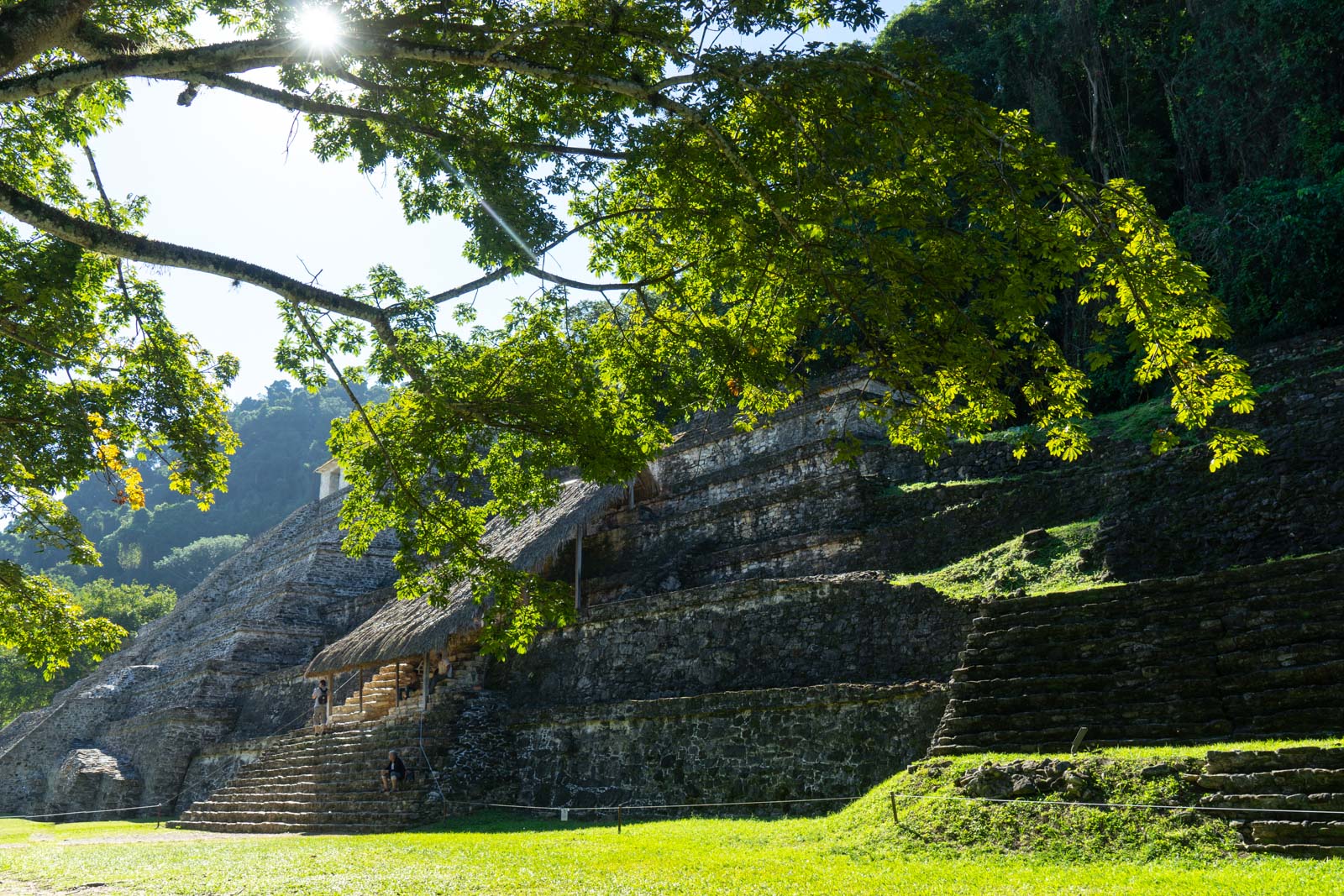 It wasn’t until 1948 that the Mexican archaeologist Alberto Ruz Lhuillier decided to investigate something a bit strange – that there were small holes in a flagstone in the floor of Palenque’s largest temple, the Temple of Inscriptions.

Ruz Lhuillier guessed that this stone might have been put on top of a tunnel or a chamber to seal it off. So he lifted it off and began to explore.

Underneath he found a steep staircase leading down into the heart of the temple. But it was so full of debris that it took four years to clear away all the dirt and rocks that were blocking the staircase. 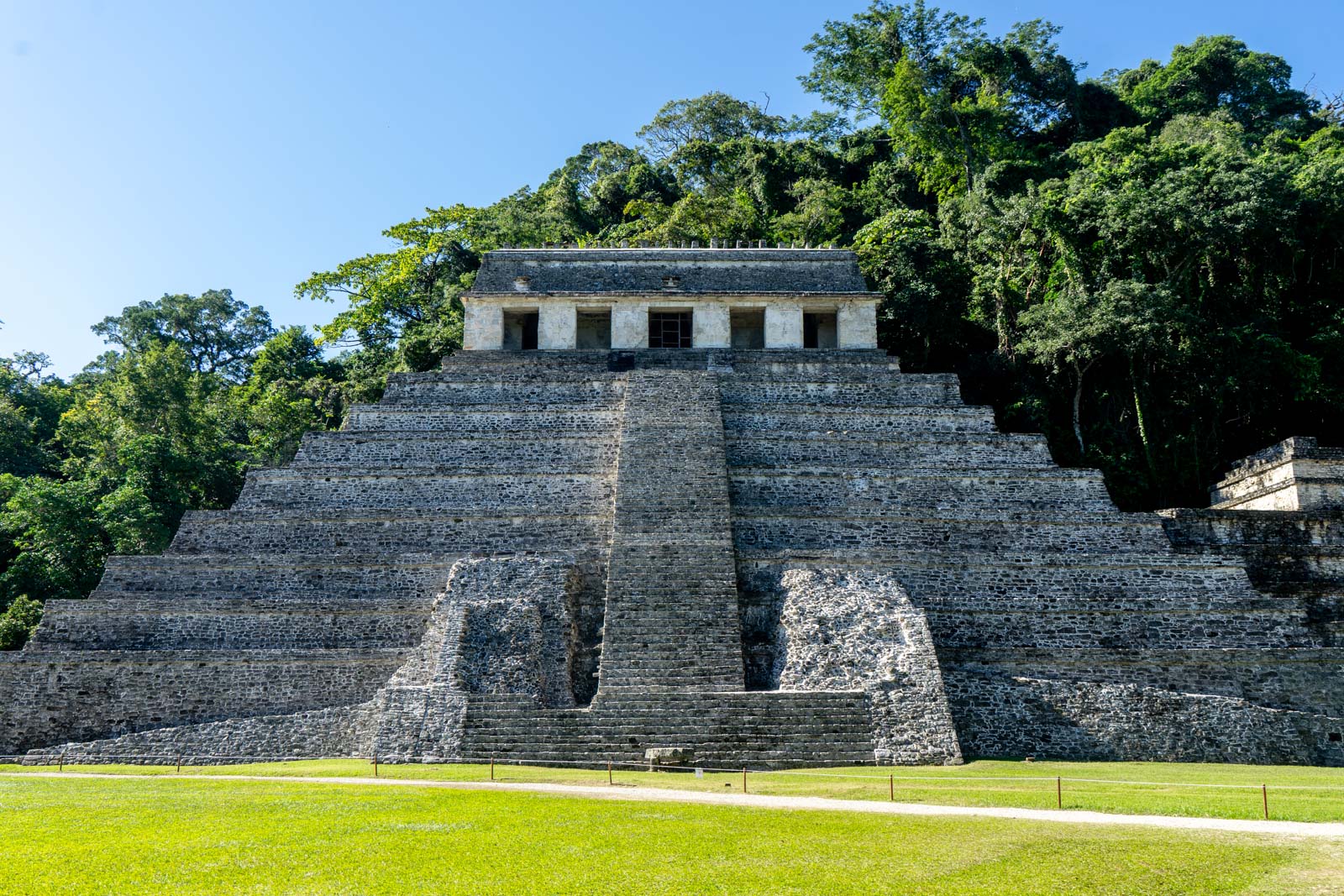 But it was worth it. Because eventually, after clearing away the stairs and going 25 metres down, he found the entrance to a tomb.

At the entrance were the bodies of six people – but, knowing enough about Mayan history, he was able to assume that these were human sacrifices to accompany the occupant of the tomb into the afterlife.

So, through a huge triangular stone door, he found the centre of the tomb. Here was a sarcophagus with an enormous lid carved from a single piece of limestone. What a sight it must have been, with the lid about 3.6 metres long and 2.2 metres wide, covered with intricate carvings of hieroglyphics along the side and the image of a man being reborn as a god on the top.

At the nearby Palenque Museum, there is a reconstruction of this tomb and it’s quite spectacular to see. As well as the lid of the sarcophagus, you can see the artwork on the walls of this grand tomb. What Alberto Ruz Lhuillier had found in this tomb, that had been closed off for about 1300 years, was the resting place of the greatest ruler of Palenque, a man called Pakal.

The story of Pakal

Palenque, here in the jungle of southern Mexico, was one of the greatest Mayan cities to have ever existed. And a large part of that was because of Pakal, the man found in this tomb.

He became the ruler of Palenque when he was 12 years old and stayed in charge until he died at the age of 80. (Although, it is worth noting here that there’s a bit of controversy about his age because some scientists say testing of his body indicated he may only have been about 40.) However, the majority of archaeologists think he probably did rule until he was 80. During this time, he consolidated power with the nobility and the military, with him at the head.

He was able to create a powerful city-state that could hold off potential attacks and embark on ambitious construction projects. The next two rulers to come after him, direct descendants of Pakal, were able to continue this. The reason we know so much about this is from the building where his tomb was discovered – the Temple of Inscriptions. As the name suggests, the walls at the top are covered in inscriptions that tell a detailed history of Palenque, especially about the rulers and their families.

The Tomb of the Red Queen

Although archaeologists haven’t been able to identify with certainty the woman found in a tomb in the building next to the Temple of Inscriptions.

As a tourist, you can’t go into Pakal’s tomb. But you can go into this other one, known as the Tomb of the Red Queen. It’s eerie to go inside, to think about the ceremony that would have happened here more than a millennium ago, the two human sacrifices placed here, and the body of the queen inside the tomb, dressed in a jade mask and jewellery, and then covered with a poisonous red powder.

The Tomb of the Red Queen is a special part of visiting the Palenque ruins but there is lots to see here and it takes a few hours to go around and get a decent overview of the site. I’m here as part of the Mayan Discovery tour with G Adventures, that goes through Mexico, Guatemala and Belize. We are visiting some of the best Mayan sites in the region and Palenque is certainly a highlight.

>> Read my review of the tour

As part of the G Adventures experience, we have a local guide who is showing us around and explaining the details of Palenque. It’s fascinating to hear the stories of rulers like Pakal, the way mathematics is used in the architectural designs, and how the walls were once covered in stucco and painted. It must have been such a grand city during the reign of Pakal – with colourful walls and artwork covering these enormous temples and pyramids.

Standing in the central courtyard of a building known as The Palace, which would have been used for political functions and entertainment, you can get some sense of how things would have been at the peak of Palenque’s power. 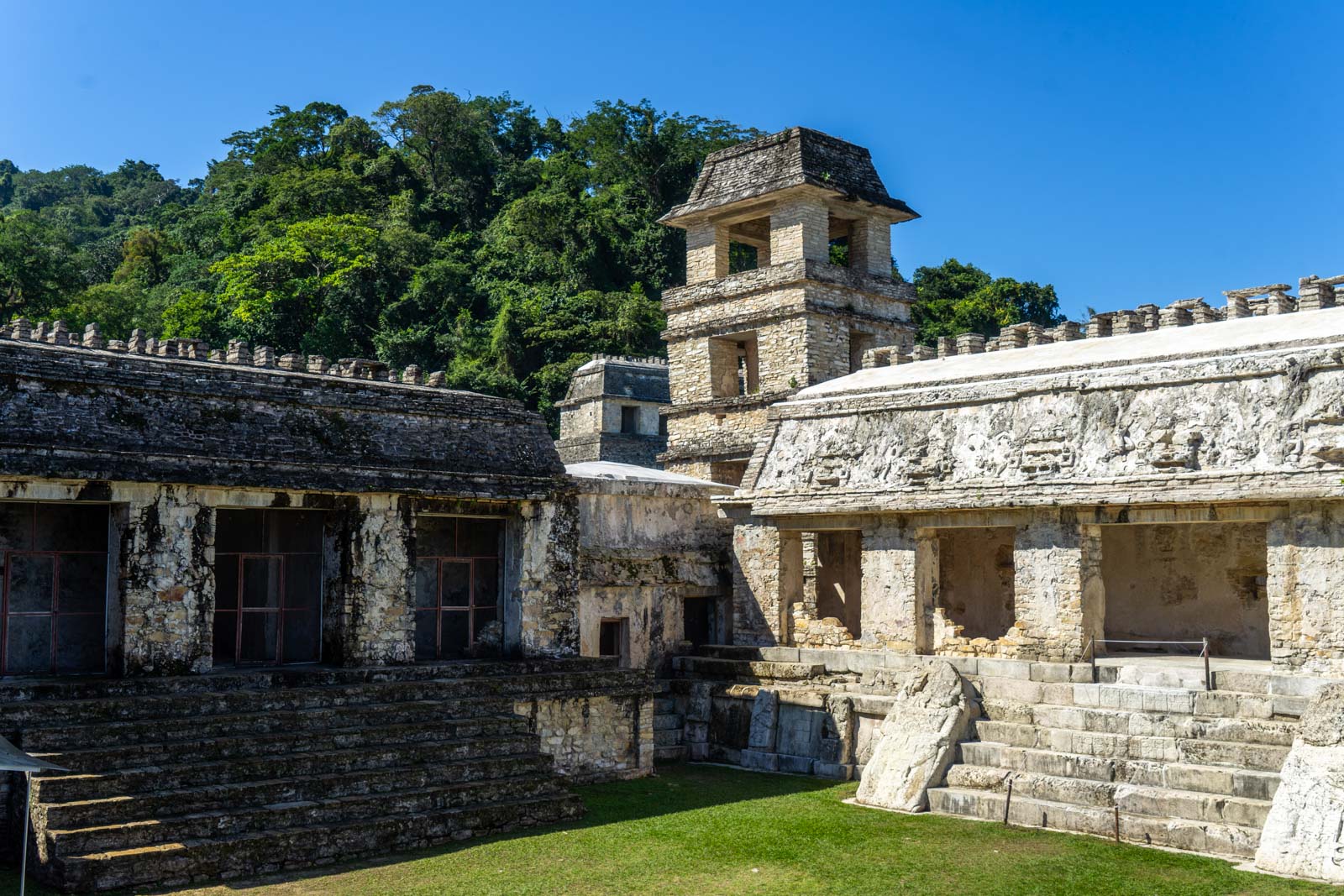 There are sculptures and bas reliefs here, along with terraces and the remains of baths and saunas. Different sections of The Palace reveal different views and it’s a large and impressive part of the site. Up the hill from The Palace, at an elevated area of the Palenque ruins, there is another collection of important buildings called the Temple of the Cross group. 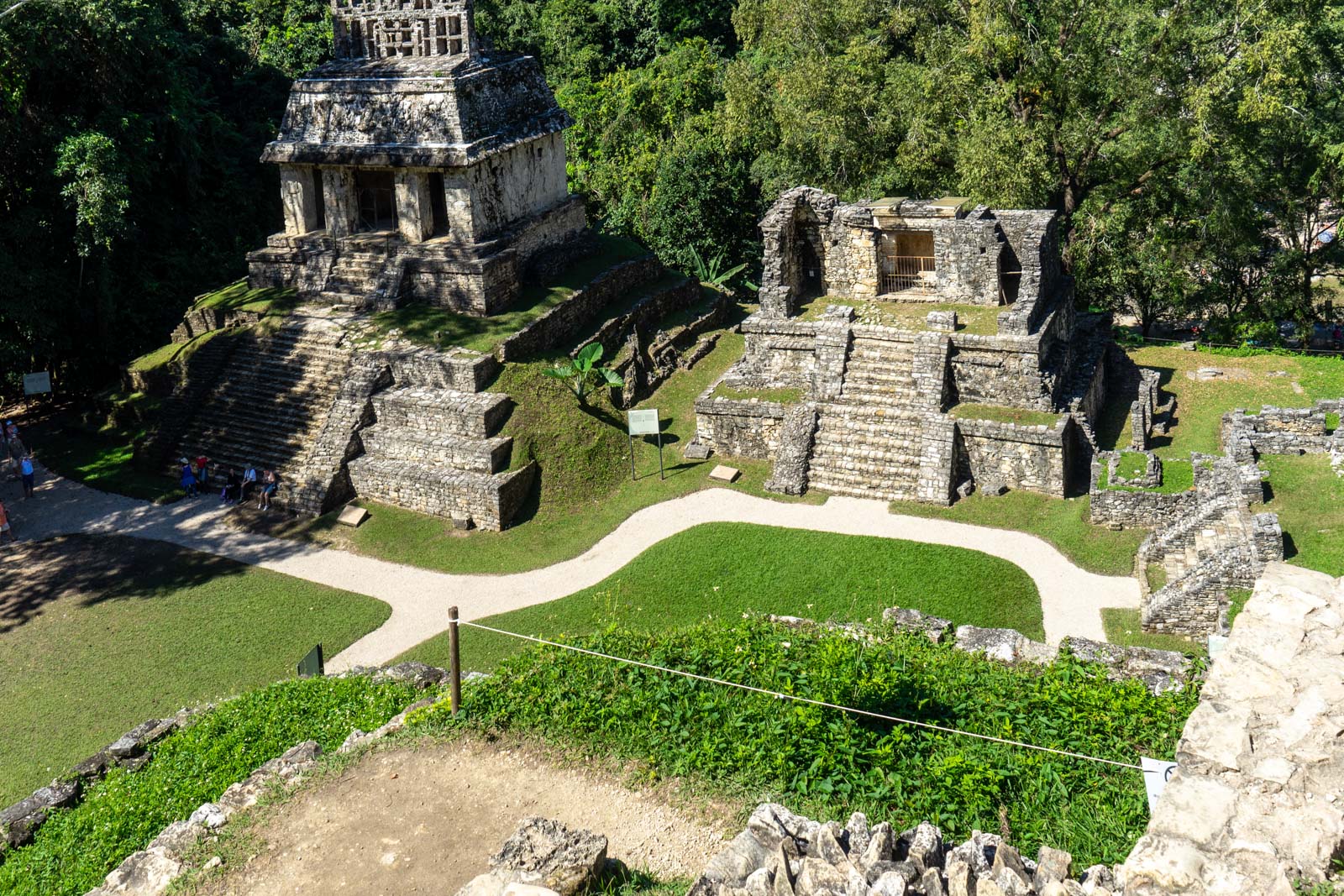 You get up here by walking up a path through the jungle, to a clearing with buildings on each side. The temples are different sizes but it’s clear which is the most important – the large towering Temple of the Cross. 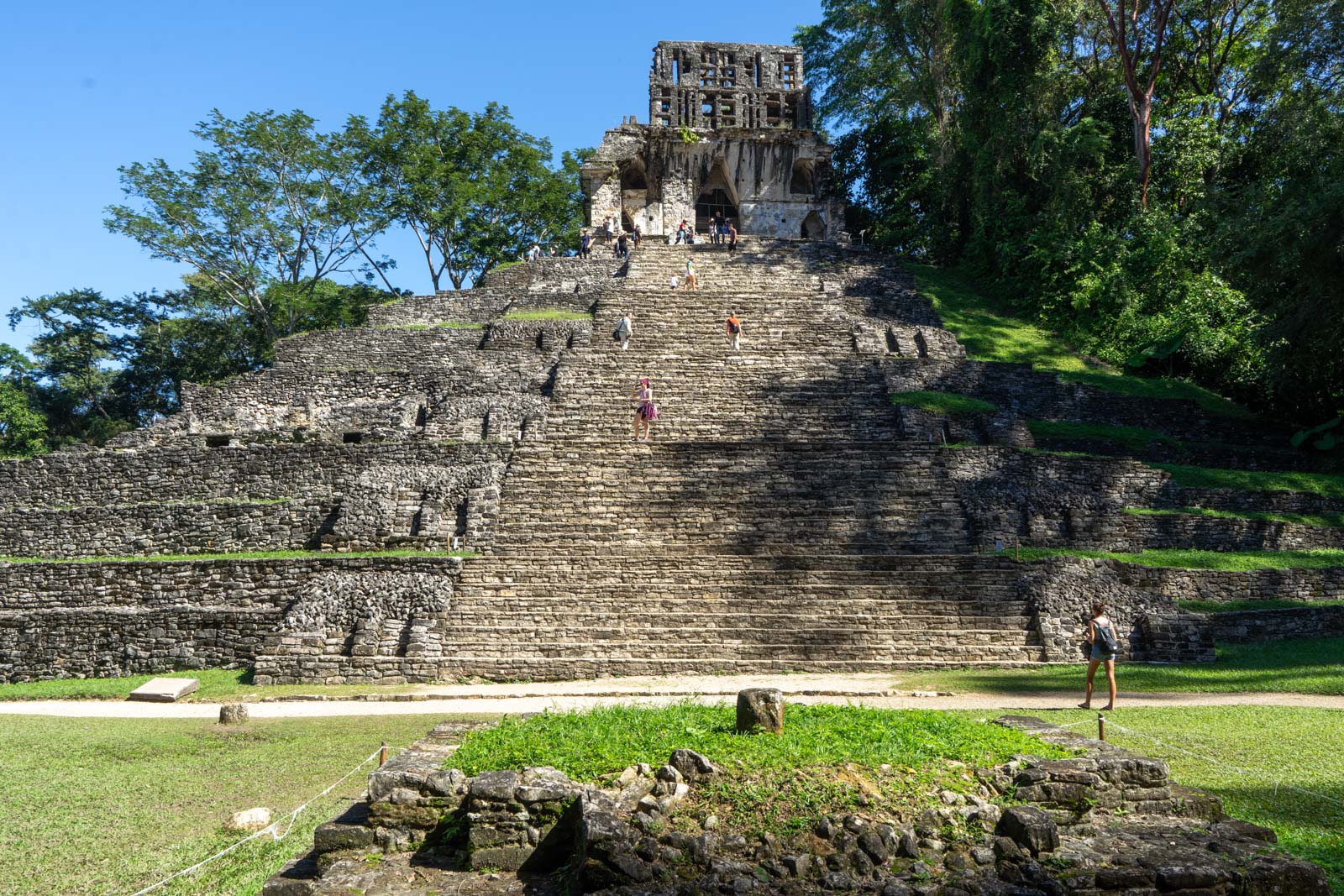 This complex was built by the son of Pakal, Kan-Bahlum, and is his attempt to put his stamp on Palenque and leave his own legacy of construction. Inscriptions at the top of the Temple of the Cross tell his story as ruler.

And then there’s the broader city, stretching out into the jungle for kilometres.

The administrative centre of Ancient Palenque is well-maintained these days, with most of the important buildings restored and the area around them cleared for visitors. But you don’t have to step too far to get into wilder landscapes. 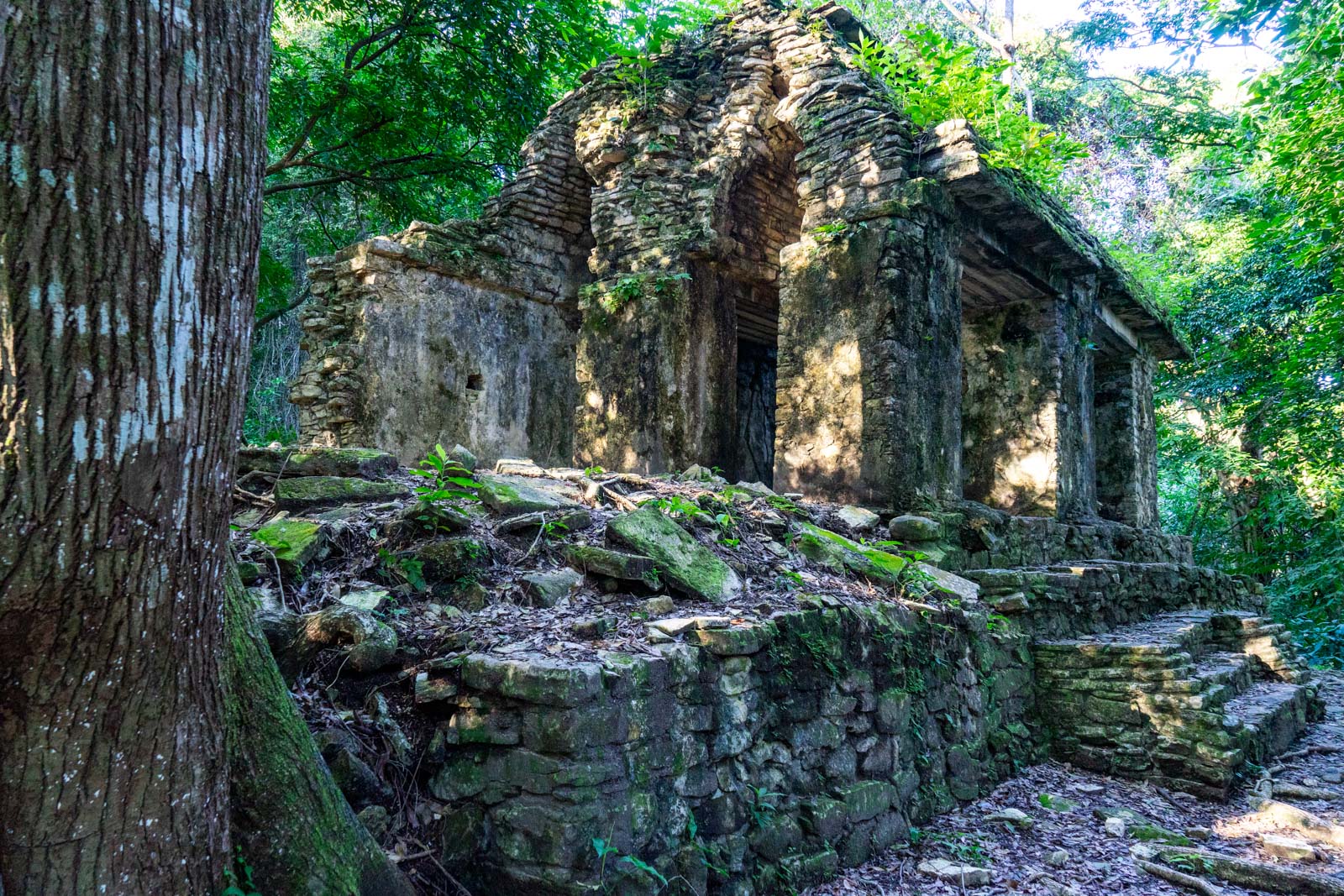 Trekking through the jungle, you can start to get a sense of how the city would have spread out from the centre – and how much work would be needed to do more restoration.

There are mounds which indicate old buildings but they are covered in dirt and plants. The thick jungle has taken over here and you have to use your imagination to picture what it would have been like when people were living here. 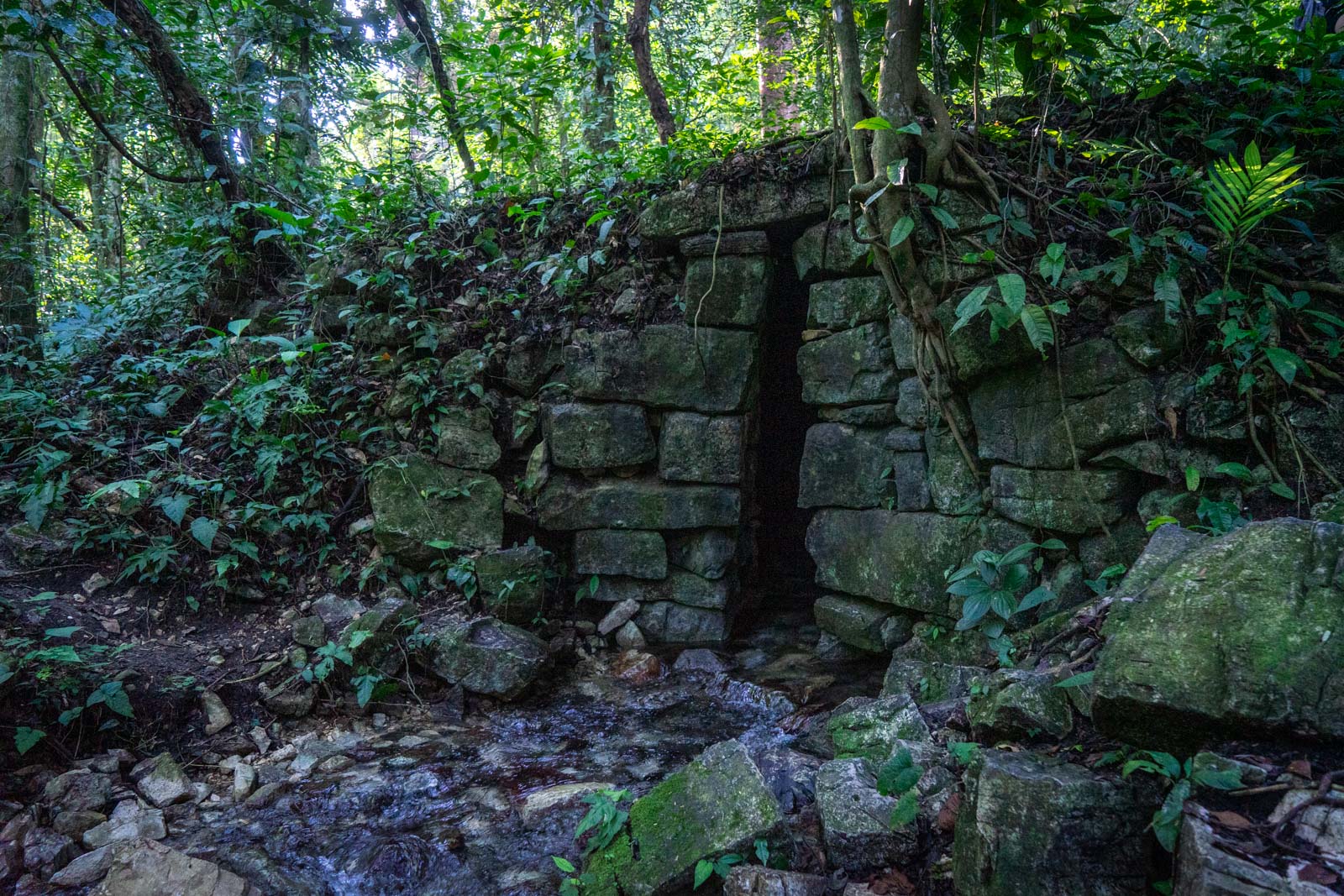 Still, it’s a fun adventure to combine with a visit to the main site. Walking through the thick foliage, coming across an old temple on a hill, or seeing the doorway to a house that now has a protruding tree – it makes you feel like a real explorer for an hour or two.

Sure, we’re not discovering the tomb of the city’s greatest ruler. But who’s to say there aren’t more amazing discoveries to be made in the Mayan ruins here at Palenque!

I travelled on this tour with the support of G Adventures in my position as a G Wanderer. All the opinions expressed are my own – I truly believe G Adventures is one of the best tour companies that you can use for a trip to Mexico and Central America. 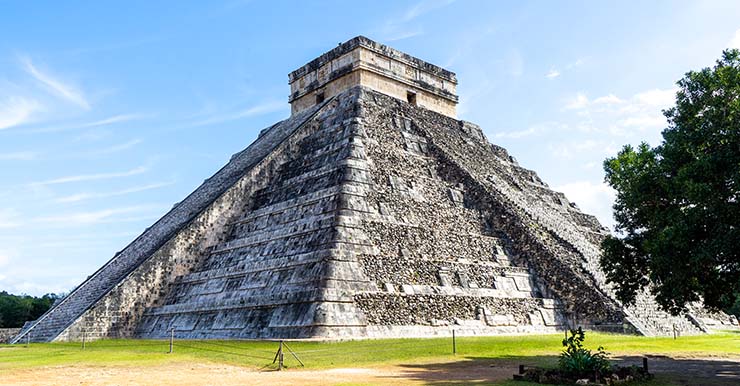