If you like the beautiful tiles and street art in Lisbon, consider heading down into the Lisbon Metro to see the art that fills each station.

JUMP DOWN: My tips on the best stations to see Lisbon’s Metro art

We often make an effort, as travellers, to seek out art galleries. We pay an entrance fee, spend our time, walk around, and look at the art.

Some pieces are more engaging to you or me than others. Sometimes a piece can be technically good but say nothing to an individual. Other times it can feel like a simple work has looked deep into your soul.

But I wonder if we appreciate art more if we’ve made that effort to go to a gallery and seek it out. Does art that you just pass by have the same effect?

In particular, I am wondering at the moment whether the people of Lisbon take the time to stop and appreciate the incredible art that they are offered every day on their metro system.

Head down into the metro in Lisbon – the city’s underground transport system – and you are effectively in an art gallery, whether you planned to be or not.

There are more than 50 stations in the network and each of them, in its own way, has been decorated.

Some of the Lisbon Metro stations have images on the platform walls, others have colourful staircases. A few of them even have enormous installations that fill every part of the station with light and colour.

The history of the art in the Lisbon Metro

It all started when the first stations of the Lisbon Metro were opened in 1959. Back then they were decorated with tiles designed by a famous Portuguese artist called Maria Keil. (She would continue doing metro station art until 1982).

It was not just about creating nice public art for commuters – it was also an homage to Portugal’s tradition since the 16th century of decorating the interior of churches and palaces with colourful tiles. (This tradition expanded in the 19th century to the facades of public and private buildings.)

Over the years, as new stations have been added to an expanding network, the style of art has changed. But so has the approach towards the art from the decision-makers at the Lisbon Metro.

In 1988, when the second generation of stations was opened, different artists were chosen for different stations. And this time those artists created particular themes – often based around the location of the stop.

Then, through the 1990s, even more emphasis was placed on the art that was being created in new stations.

It had become such an important part of the character of the public transport system that it was part of the architectural design, not just something put on the walls afterwards.

As stations were built in developing areas further from the centre, there was more space to create large and more innovative canvases.

If you come to Lisbon, there’s a good chance you’ll use the metro at some point. It’s an efficient way to get to some of the spots a bit further out from the walkable centre (and a good way to get into town from the airport).

Don’t treat it like you may treat your public transport at home – a frustrating but necessary experience to get to a destination. Think of it as a journey through an art gallery.

As you travel along, look out the window at each station to see the different works. Many of them are obvious from within the carriage. For others, it might be worth getting out specially to have a look.

In fact, it’s not such a silly idea to do your own tour of the art in the metro stations of Lisbon.

As long as you’re not travelling at a strange time of day, you’ll find that a train will come along every few minutes. Which means you can jump off at a station, have a brief look around, get on the next train to the next station, and do the same again. The whole way along!

There are four lines of the Lisbon Metro. To experience the station art, I would suggest the Red Line is the best. My next favourite is the Blue Line, followed by the Yellow Line and finally the Green Line.

Here are my thoughts on each of the Lisbon Metro lines and the best stations on them to see the metro art.

As I mentioned, the Red Line is definitely my favourite. It has the fewest stations of the four lines but it is the most modern.

That means that the art projects on the metro were in full steam by the time the stations were built and they were clearly part of the planning.

My next favourite is the Blue Line. What’s so great about this line is that each station has a clearly-identifiable theme.

There’s a huge range of styles across the stations. Each one tells its own story about the area of Lisbon where it’s located or the topic that’s been chosen as the foundation for the artworks.

It’s the longest of the lines so there’s a lot to see.

The Yellow Line is also a really enjoyable one to explore and also has a good variety.

In general, it doesn’t have the large impressive installations that some of the more modern sections of the other lines have. But what I really like is the quality of the individual artworks in the stations.

There are more than just patterns and you can appreciate the detail.

As I mentioned earlier, the Green Line is my least favourite collection of art in the Lisbon Metro. It has some of the oldest stations here and they generally have a more traditional approach, with pretty but subtle patterns made out of tiles.

If you are interested in seeing some of these older works, I would suggest stopping at Anjos and Intendente. Because I didn’t spend a lot of time taking photos on this line, I want to show you the two stations on the Green Line that I think are particularly worth seeing.

Lisbon has some amazing art galleries and they shouldn’t be ignored. But don’t forget this enormous one underground.

If you have any favourite stations, please let me know in the comments below!

THE BEST ACCOMMODATION IN LISBON

I would recommend choosing accommodation in a neighbourhood like Baixa, Bairro Alto, or Alfama, where you’ll be close to all the action.

If you’re looking for a budget option, the Lost Inn Lisbon is right in the heart of the city.

For cheap private accommodation, there are some lovely guesthouses like City Lofts Lisbon.

If you’re interested in something with a bit more style, I would recommend the Lx Boutique Hotel.

And for some real luxury, have a look at the incredible Memmo Príncipe Real. 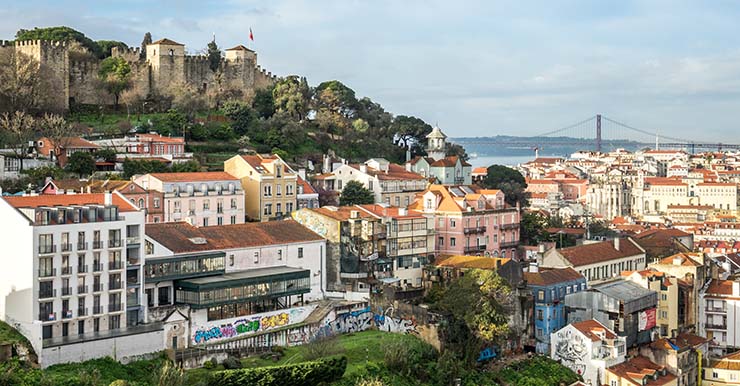 WANT TO KNOW MORE ABOUT LISBON?

To help you plan your trip to Lisbon:

You may also want to consider taking a Portugal tour that includes Lisbon, rather than organising everything on your own. It’s also a nice way to have company if you are travelling solo.

I am a ‘Wanderer’ with G Adventures and they have great tours in Portugal.