Who would go to the Lamborghini Academy?

I’m not sure exactly what I expected but it wasn’t this.

When you think about the kind of people who might go to an exclusive (and not cheap) Lamborghini driving academy in Italy, you think young playboys and middle-aged men going through middle-aged crises. You don’t think of a 66-year-old woman who has trouble reaching the pedals.

That seems to be the thing about fast cars, though. They favour no gender, age or nationality.

There were only five drivers at the Lamborghini Academy other than myself and fellow blogger Ted Rydmark – and with those five people, four different continents were represented.

Why would they come here to the Imola Racecourse for this, though?

Why would they fly across oceans, spend thousands of dollars to spend a day behind the wheel and on the track?

Well, to find out, I asked them. These are the people of Lamborghini: 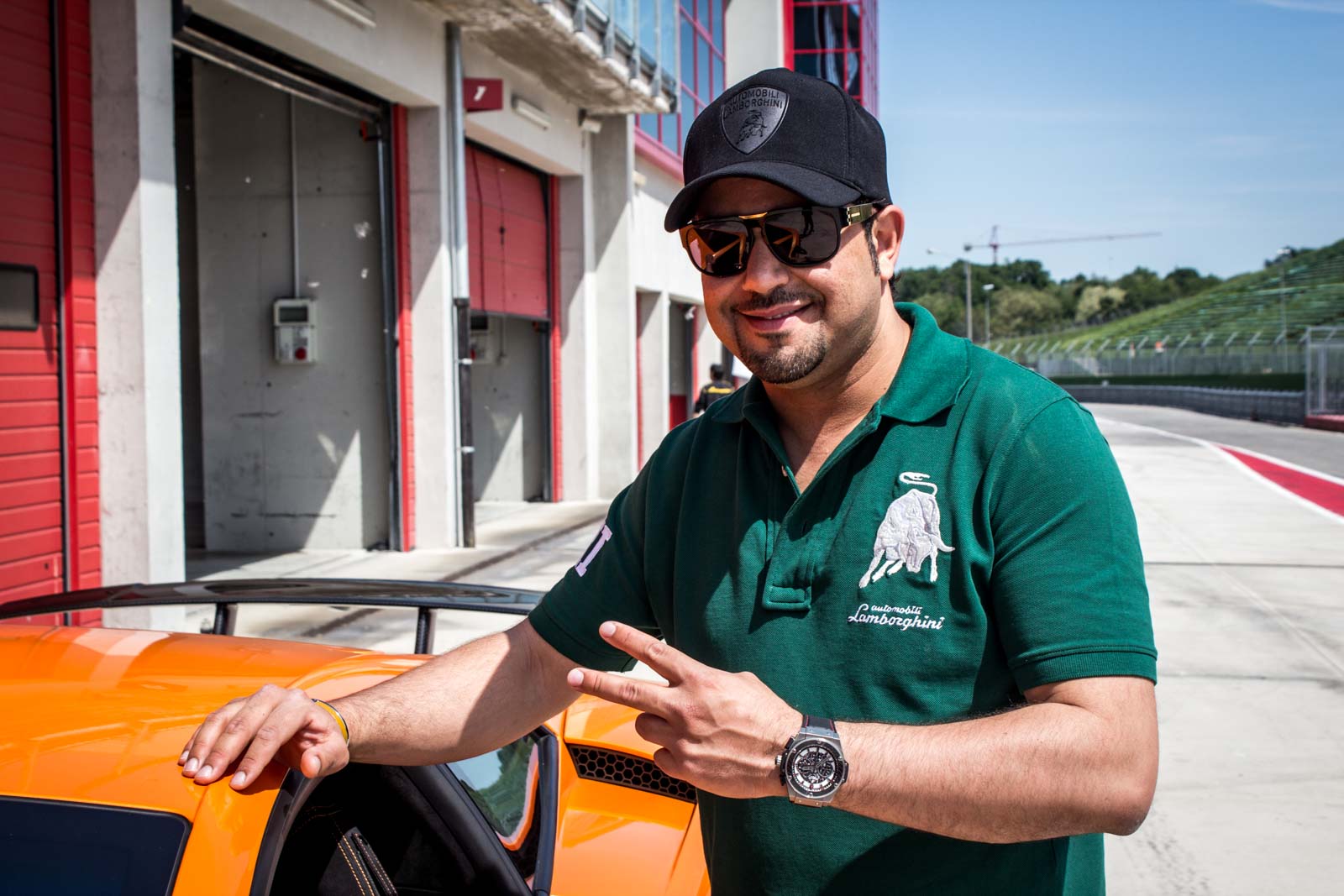 Sahbi is a softly-spoken Tunisian but beneath his bonnet is a love of fast cars. He’s enjoyed his BMW M6 but is soon to become the owner of the first Lamborghini Avendator in Tunisia.

“They have some Gallardos but the Aventador, not yet. I think maybe I will be the first in Tunisia,” he tells me modestly, but clearly with a sense of excitement.

Sahbi has ordered a black one but is still waiting for it to be made in the factory here in Emilia Romagna. He’s come to the driving academy to try out the new car before he gets his hands on his own one.

Life as a tuna farm operator, which is what Sahbi does back home, might be slow but Sahbi is anything but relaxed on the Imola course.

“I learnt how to drive on the chicane, and how to brake,” he says. “But it’s very crazy to drive fast. I love it to drive very, very fast.” 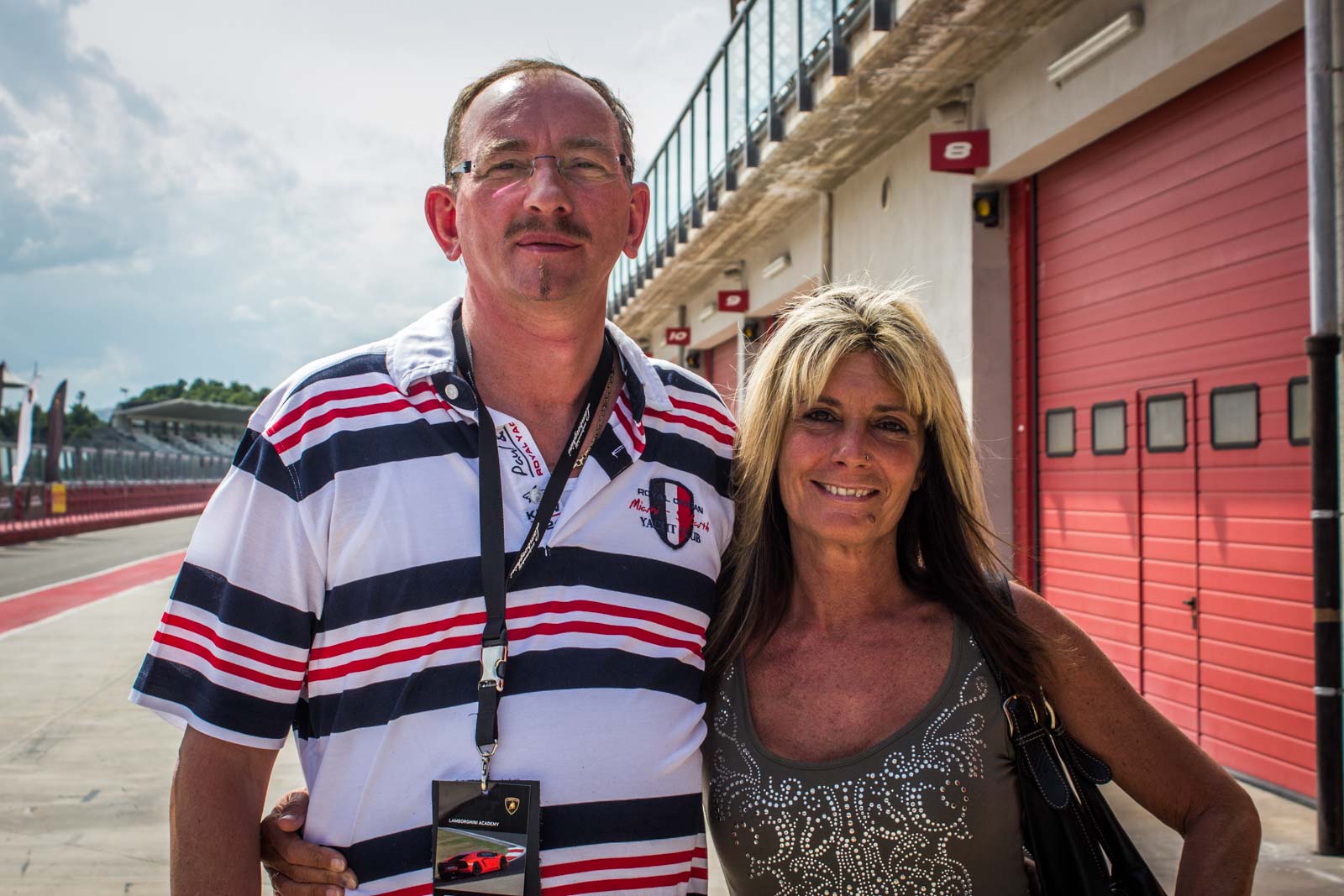 Michael Wittich is also a man who loves his sports cars. “I like all toys with big engines,” he laughs. “Big boys, big toys!”

At home in Germany he drives a Porsche (what fun on those autobahns!) but his wife, Jutta, gave him the Lamborghini Academy course as a present. Together, the two of them seem to spend almost as much time laughing as concentrating on the cars.

In some ways they’re like children in a candy store, unable to believe they’re actually here.

Out on the track, though, Michael is all business and he’s found it streets ahead of his usual driving experiences.

“A Porsche is for everyday, it’s almost a regular sporty car,” he explains. “But a Lamborghini is an exotic car.” And then he laughs. 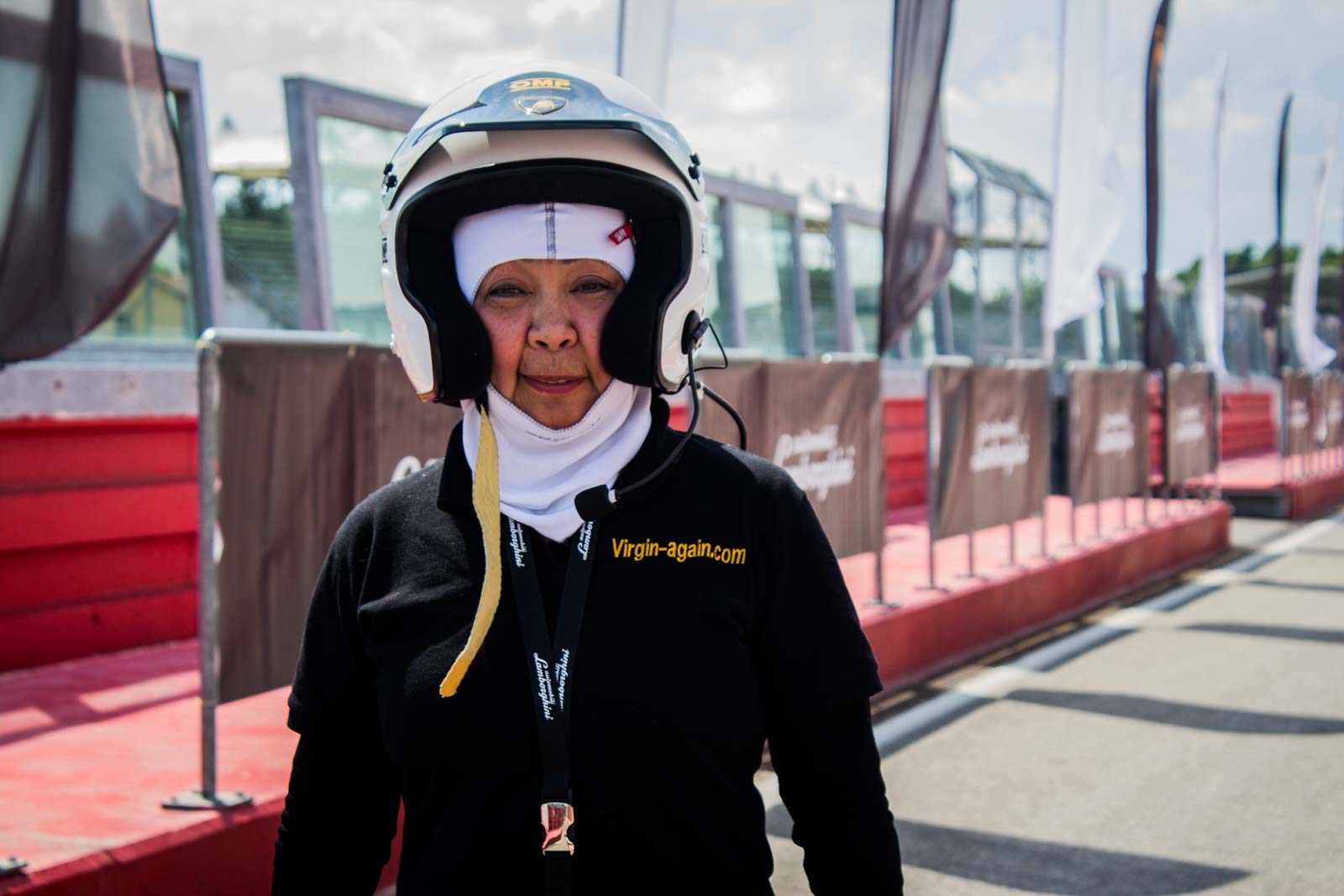 Before we even get to Imola, Meliza has mentioned a few times that she needs a pillow for the seat. She’s not the tallest of women and it seems the Lamborghinis aren’t designed for her size.

Not that it bothers her too much – she already owns one and is now considering a second.

At 66 years old, she’s not the typical Lamborghini driver, and that attracts a bit of attention (from police and other commuters) on the highways of California, where she lives.

“I love speed,” she tells me. “And who would think that a senior citizen could drive that fast!”

Meliza owns a business selling vitamin pills, which appears to be very successful. For her, part of the joy of driving these cars is the fact that she can – something that seemed impossible during her poor childhood in the Phillipines.

“When you dream and you achieve your dream it’s a different status in life,” she says. “Because you wanted this and you got it on your own without any help from anyone.” 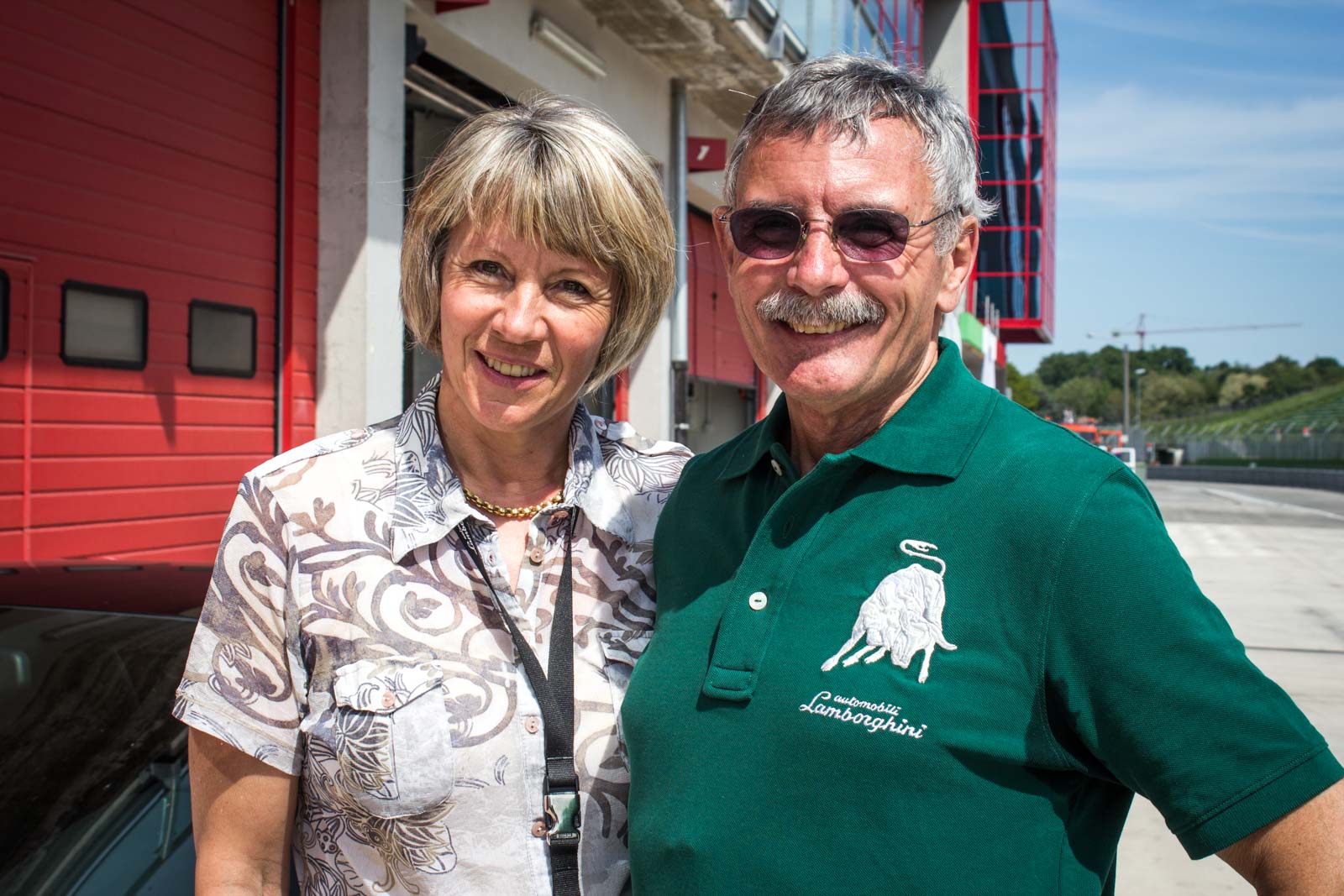 For Peter and Gret, this is nothing new. The two of them are huge car enthusiasts and take the opportunity whenever they can to drive different cars on the world’s best racetracks.

“We like to drive fast cars,” Gret says. “Every time you go to a race track you can learn new things. We have a lot of experience on the tracks.”

At home in Switzerland, Peter has a Lamborghini Murcielago and Gret has an Aston Martin. Sometimes they take their own cars to the racetracks, sometimes just one or sometimes they drive new ones, like today (although Peter’s the only one who signed up for this particular course).

“It’s just a hobby, just for fun,” Gret explains. “Coming here is for the better handling of the car.” 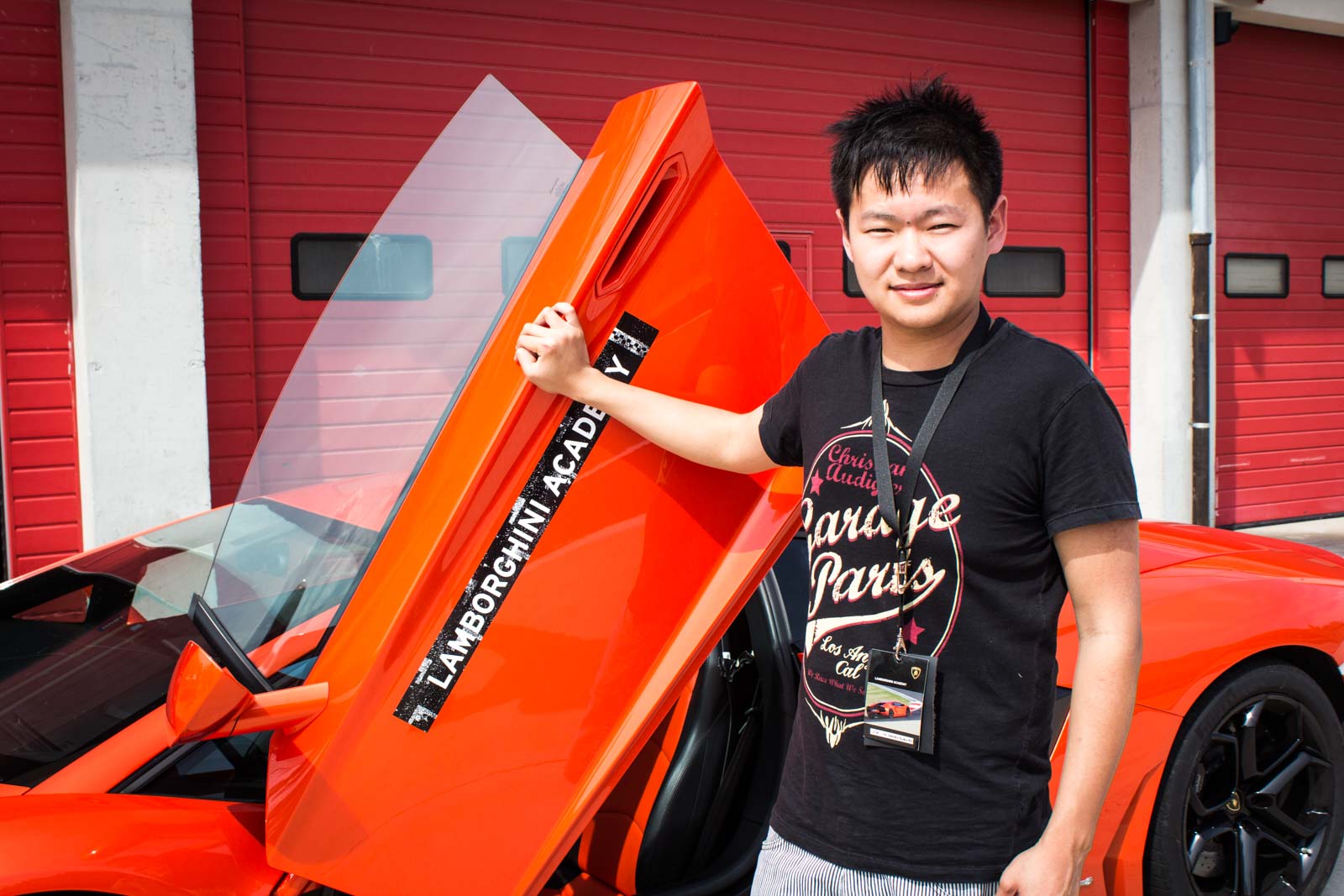 At 24 years old, Ye is the youngest of our group at Italy’s Imola Racecourse, but he’s not intimidated by the others. His visit to the Lamborghini Academy is part of a bigger month-long trip around Europe that’s focussing on motorsports.

His passion for cars can be traced back to when he was a young boy in Shanghai.

“I think it was from childhood and the mini cars,” he tells me. “I think every boy likes cars I just got a little far, a little bit bigger.”

Whether it’s his age, his skills or something indefinable, Ye is one of the fastest drivers on the track. In one of his last laps, he gets up to a speed of more than 220 km/h.

“That’s cool,” he says to me afterwards (more nonchalantly than I would expect). “But you really have to focus on the way you brake.”

Ain’t that the truth!

>> More info here about the Lamborghini Academy
For a good budget option, I would suggest the Dopa Hostel near the city centre.
For an affordable hotel, All' Ombra del Portico has good rooms just out of the town centre.
If you're looking for a trendy design hotel, I would suggest Boutique Hotel Calzavecchio.
And to splurge, the Savoia Hotel Regency is probably the best in Bologna.

Time Travel Turtle was a guest of Lamborghini and the Emilia Romagna tourism board but the opinions, over-written descriptions and bad jokes are his own.