The enormous pink penis catches the light as I approach it.

There’s no glint of shame as it exposes itself to the crowd. It’s the centre of attention, with throngs of Japanese people pushing to get closer to the engorged phallus.

In a country normally so obsessed with decorum, it’s an odd sight. 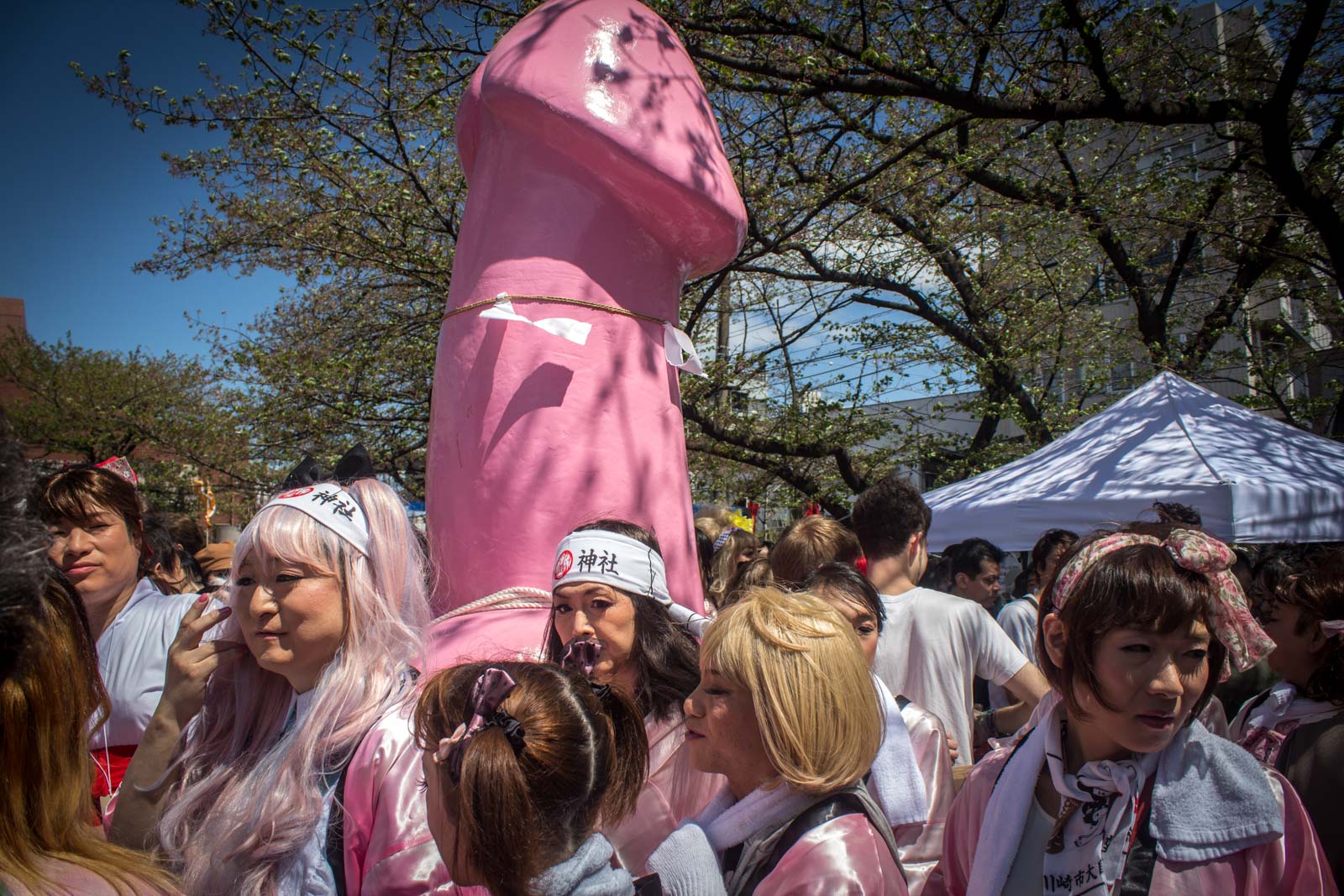 Well, it would be an odd sight anywhere else in this country, but this is the annual Japanese penis festival – the celebration of manhood that happens under the guise of a religious ceremony at a Shinto shrine.

That’s right, blessed be the cocks here in the city of Kawasaki, about half an hour south of Tokyo. 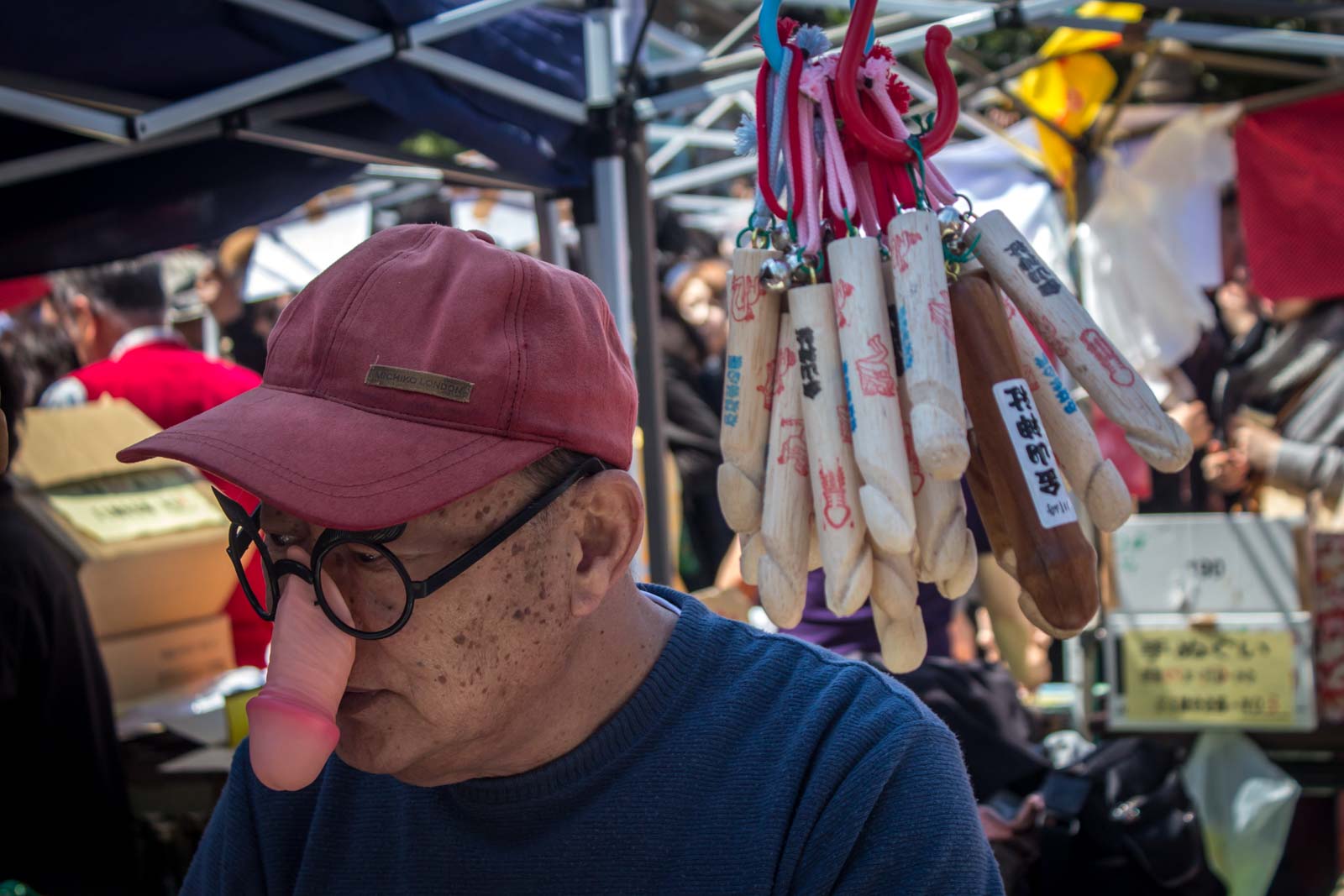 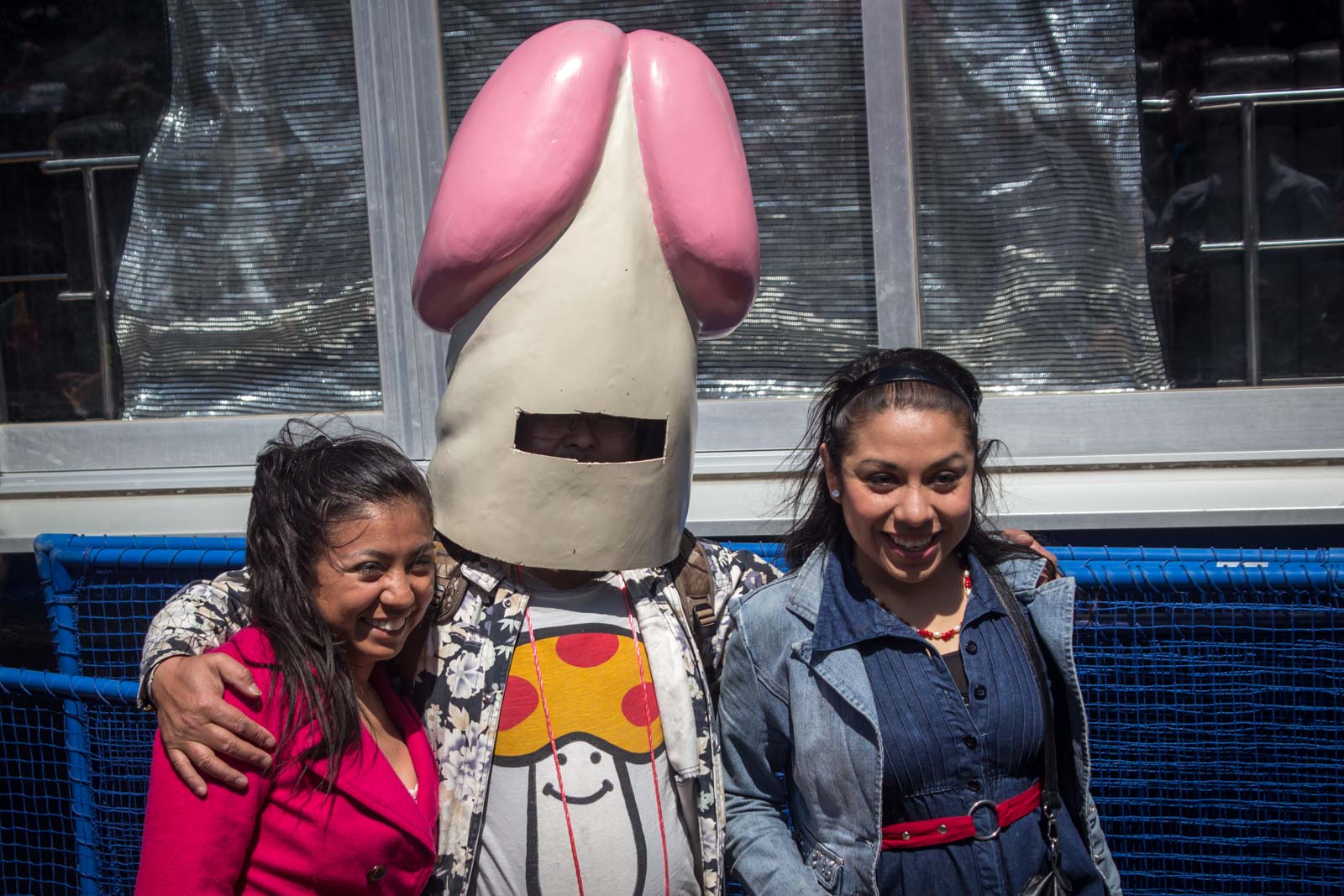 Before I get to the thrust of the Japanese penis festival in Kawasaki (see what I did there?), let’s take a step back for a second. We should pay tribute to the origins of this annual event which is officially called Kanamara Matsuri.

The shrine has been the place for people with penises in their prayers for more than four centuries.

In the 1600s, this area was full of prostitutes and they would come here to ask for protection from sexually-transmitted diseases.

Over time, people started coming to pray for fertility, long marriages, healthy births… and then (somehow) the penis symbology got twisted (sounds painful) to also represent a successful business and a prosperous life (try telling that to Tiger Woods!). 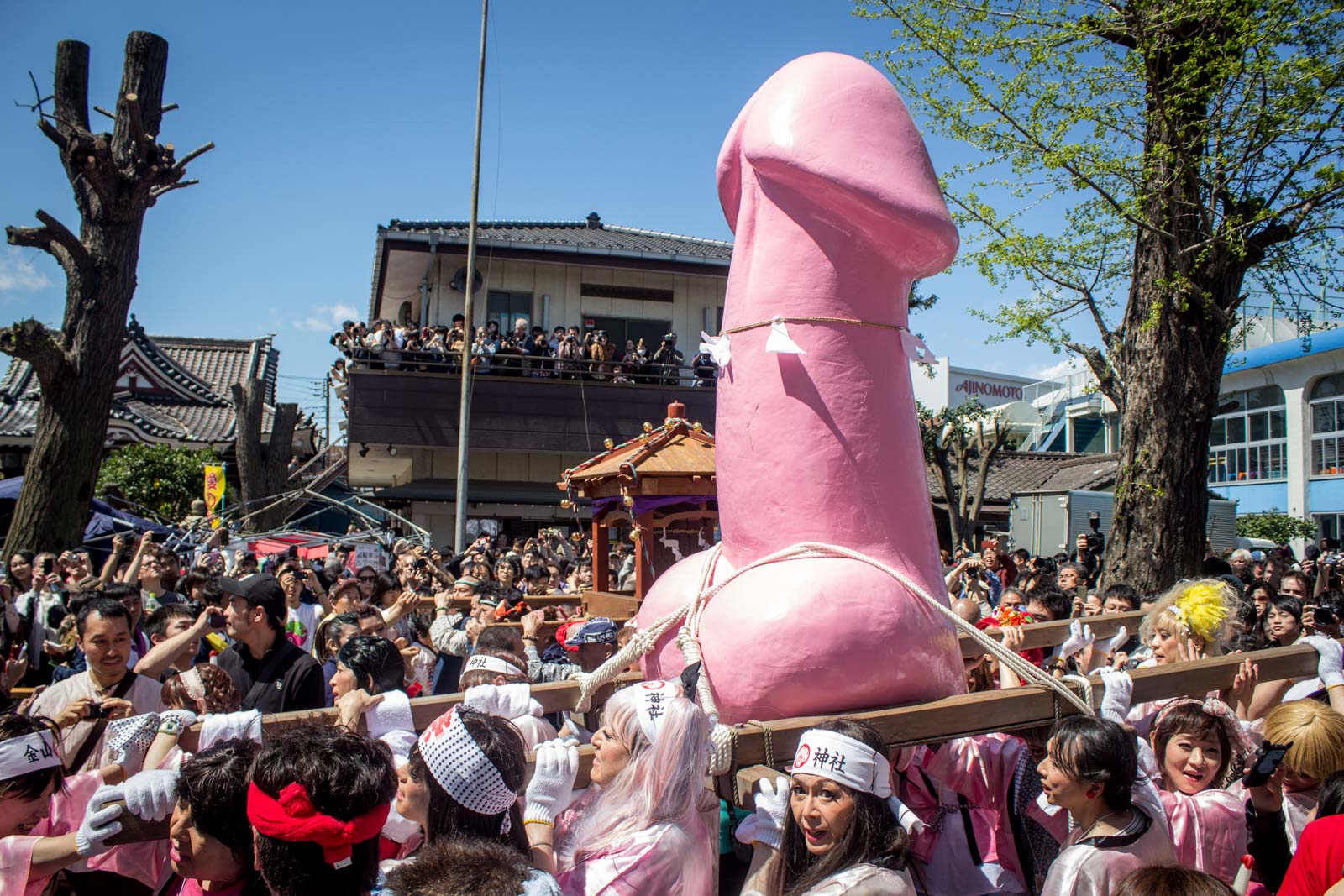 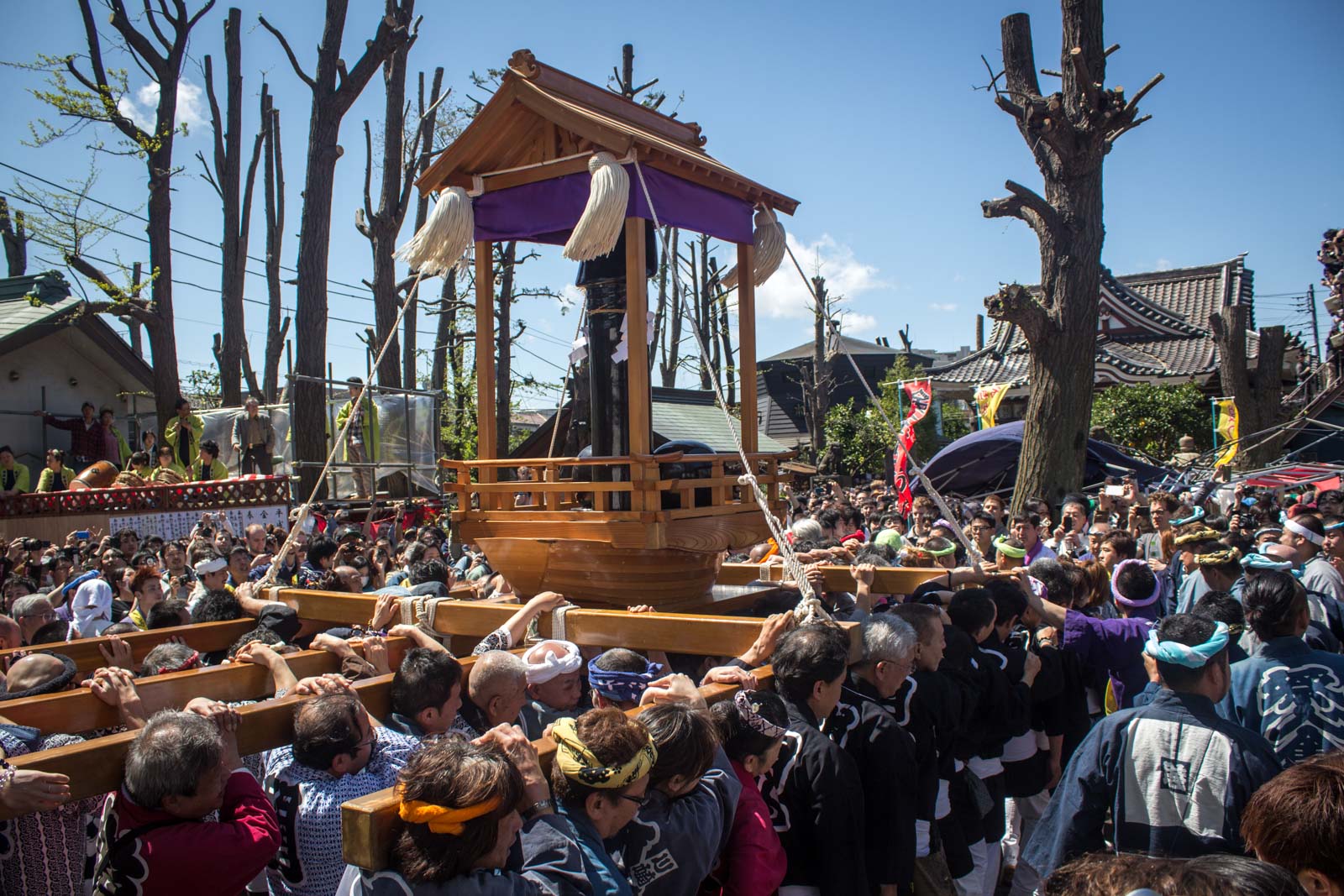 Now, back to this enormous pink phallus.

It’s actually one of three that are the centrepieces of the festival and it’s not even the most important. That honour goes to the slightly smaller (but still quite well-endowed) black iron penis which is housed in a small wooden temple on sticks.

As the legend goes, back in ye olde days, a sharp-toothed demon hid inside the vagina of a young woman and castrated her husband on their wedding night.

The iron penis was forged by a blacksmith to break the demon’s teeth and kill it! (Don’t think about this story for too long… in fact, let’s just move on.) 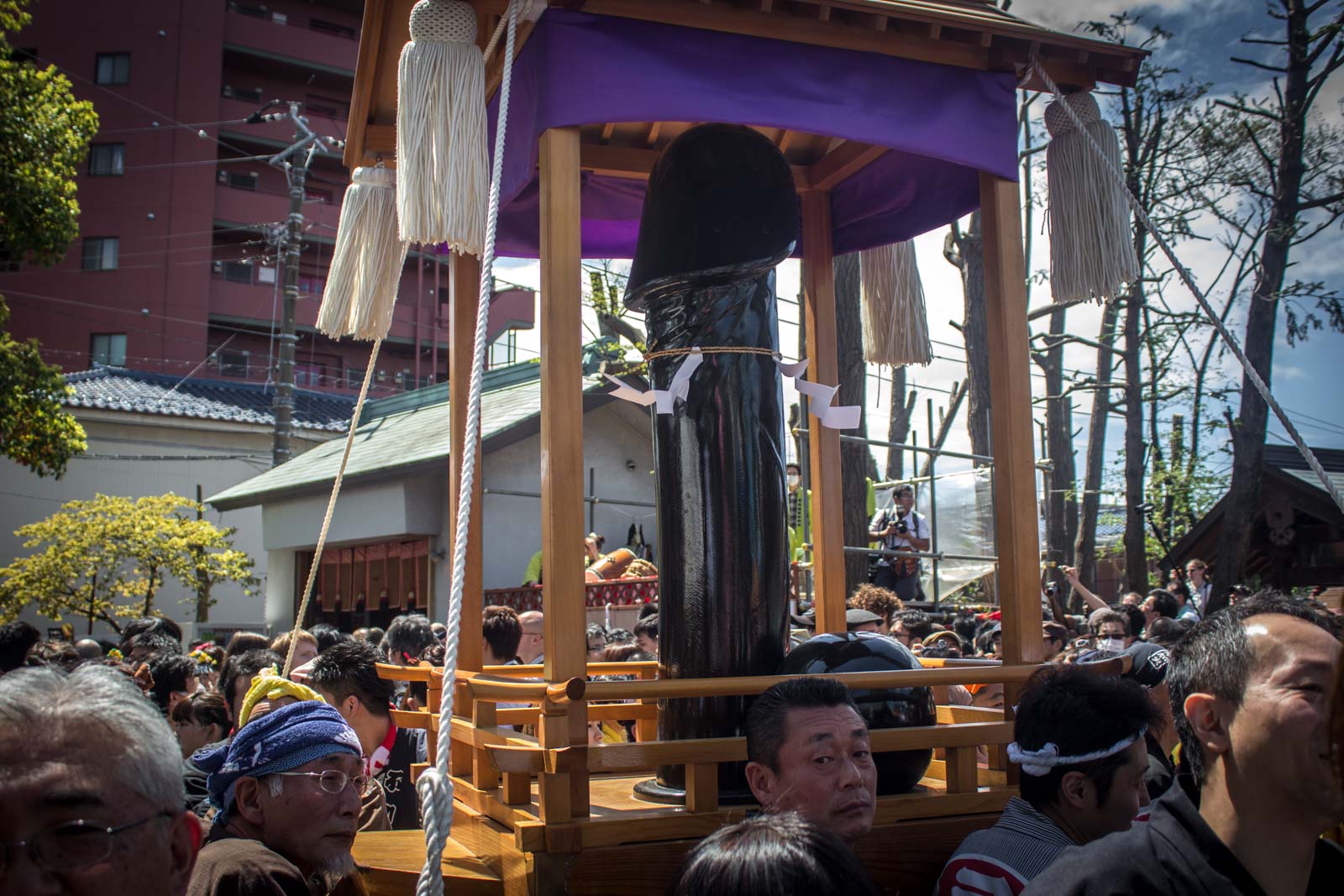 So, back to today, and the official part of the Kanamara Matsuri Festival each year in Kawasaki is the parade through the nearby streets where the three huge altars with the erect idols are carried by groups of worshippers.

The footpaths are full of people who crowd around these mobile temples as the bearers chant and sing and shout and sway from side to side.

There’s nothing particularly serene about this and it looks more like a Mardi Gras than a spiritual pilgrimage. 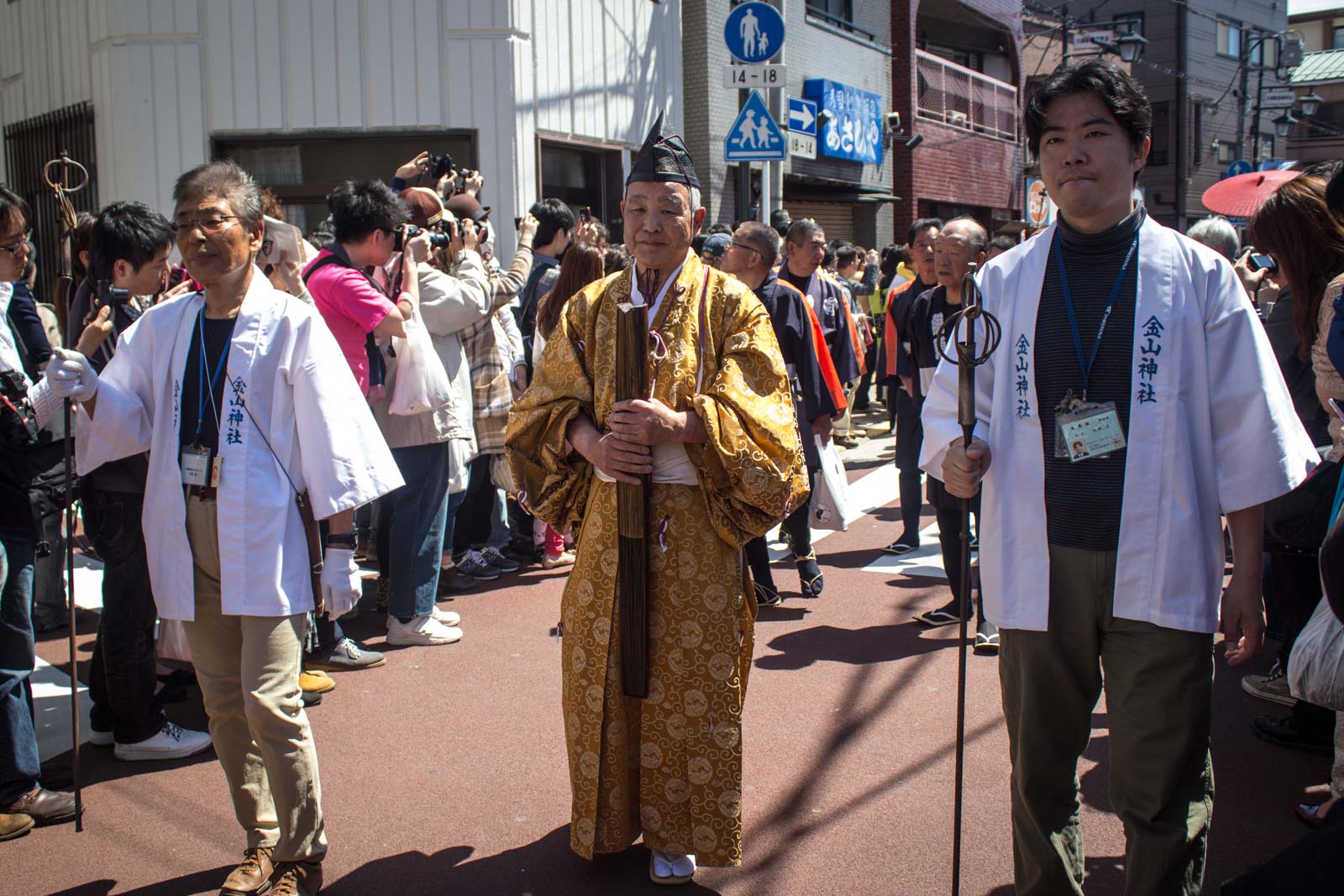 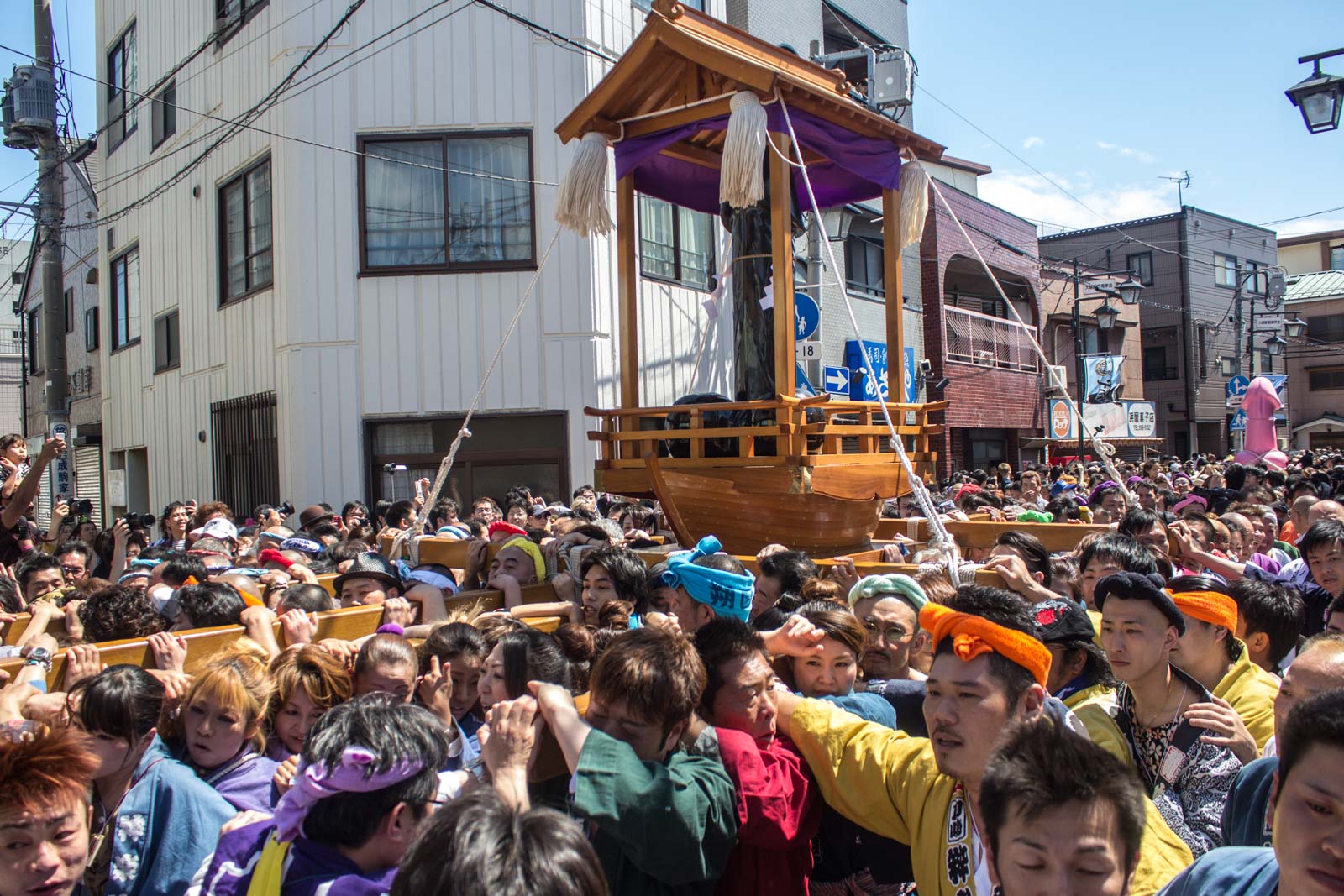 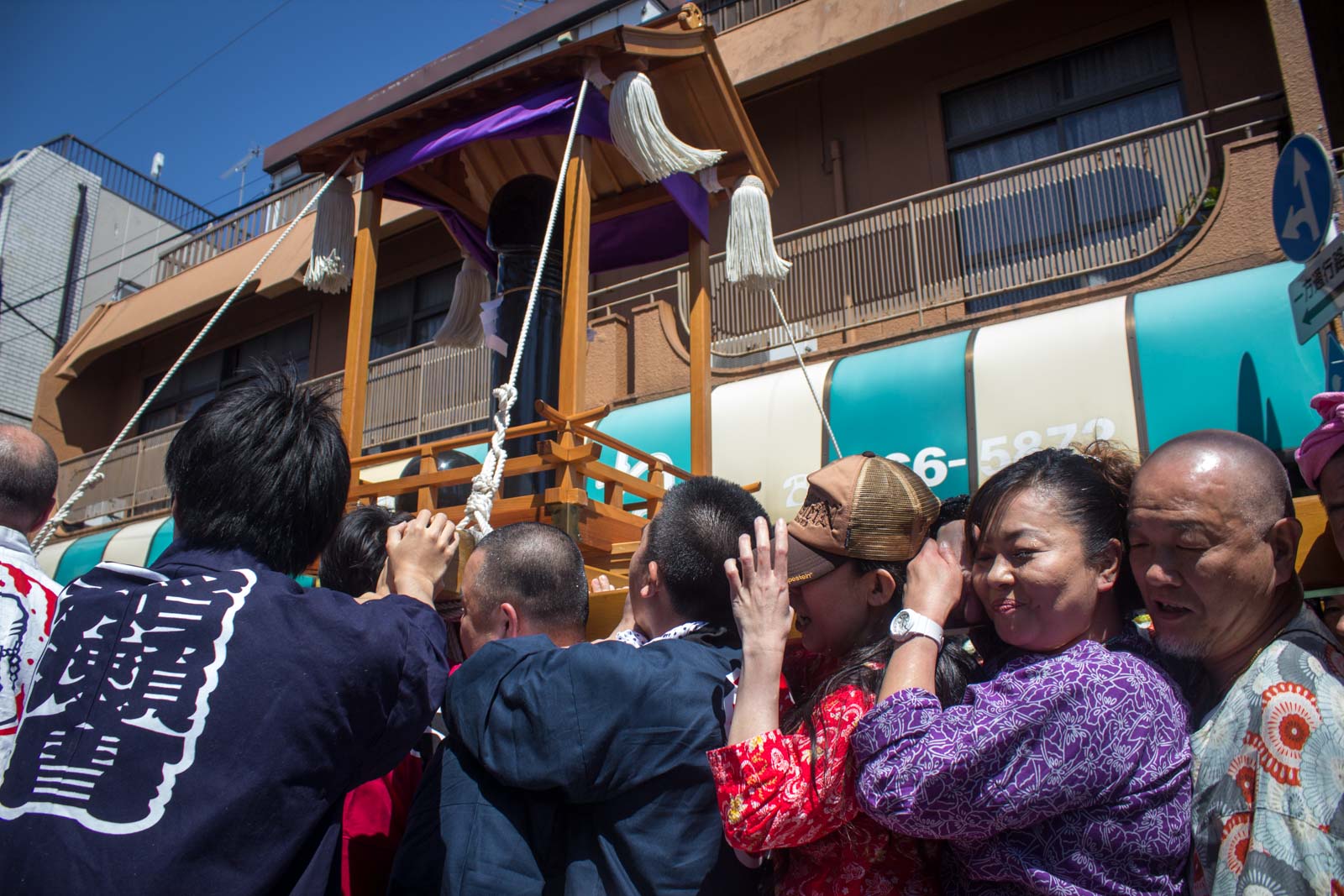 In fact, that’s the mood of the whole day. Nothing is taken too seriously.

Whatever the origins of this festival, it is now one big party… just one where religion and cocks are mixed together (the Catholics don’t have a monopoly on that!).

The traditional carving of the radishes into phallic shapes happens in one corner and in another are large wooden wangs that you can ride like a horse. 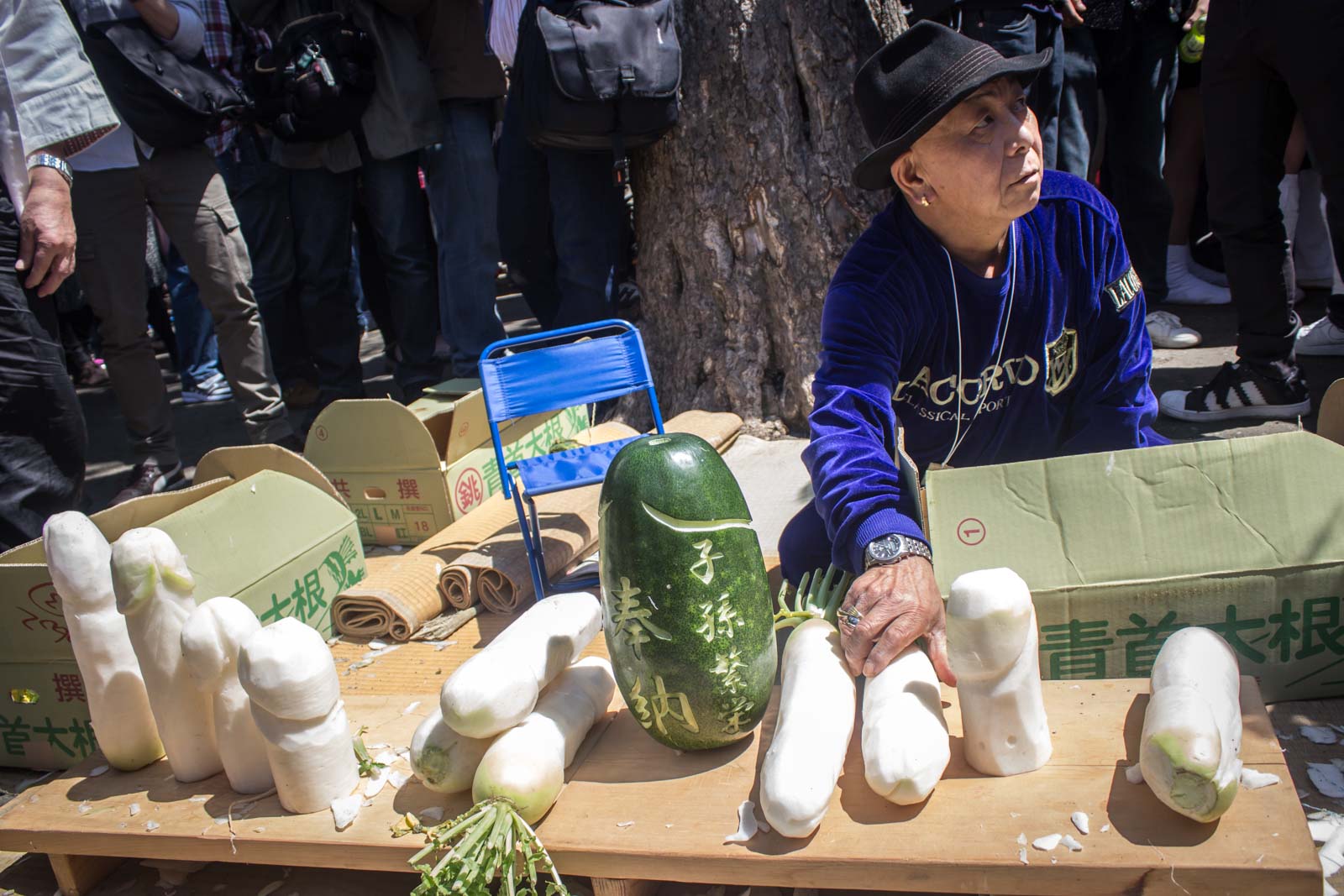 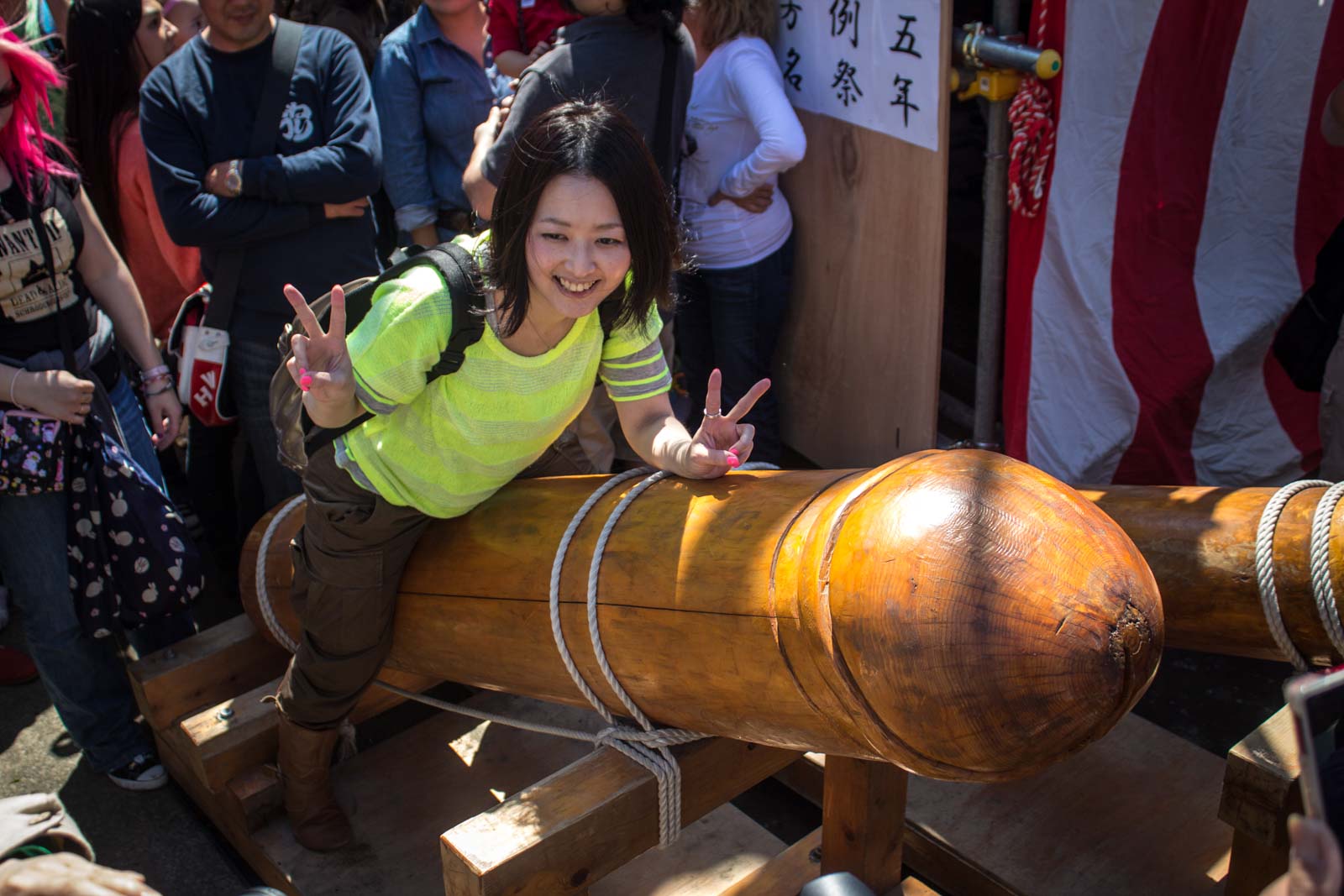 It’s all good fun and the penis festival staff (honestly, no pun intended) try to make it a fun event by encouraging the crowd to get involved.

Because of the reputation Kanamara Matsuri has gathered over the years and the proximity to Tokyo, it’s extremely popular with ex-pats as well and foreigners make up a large part of the crowd. 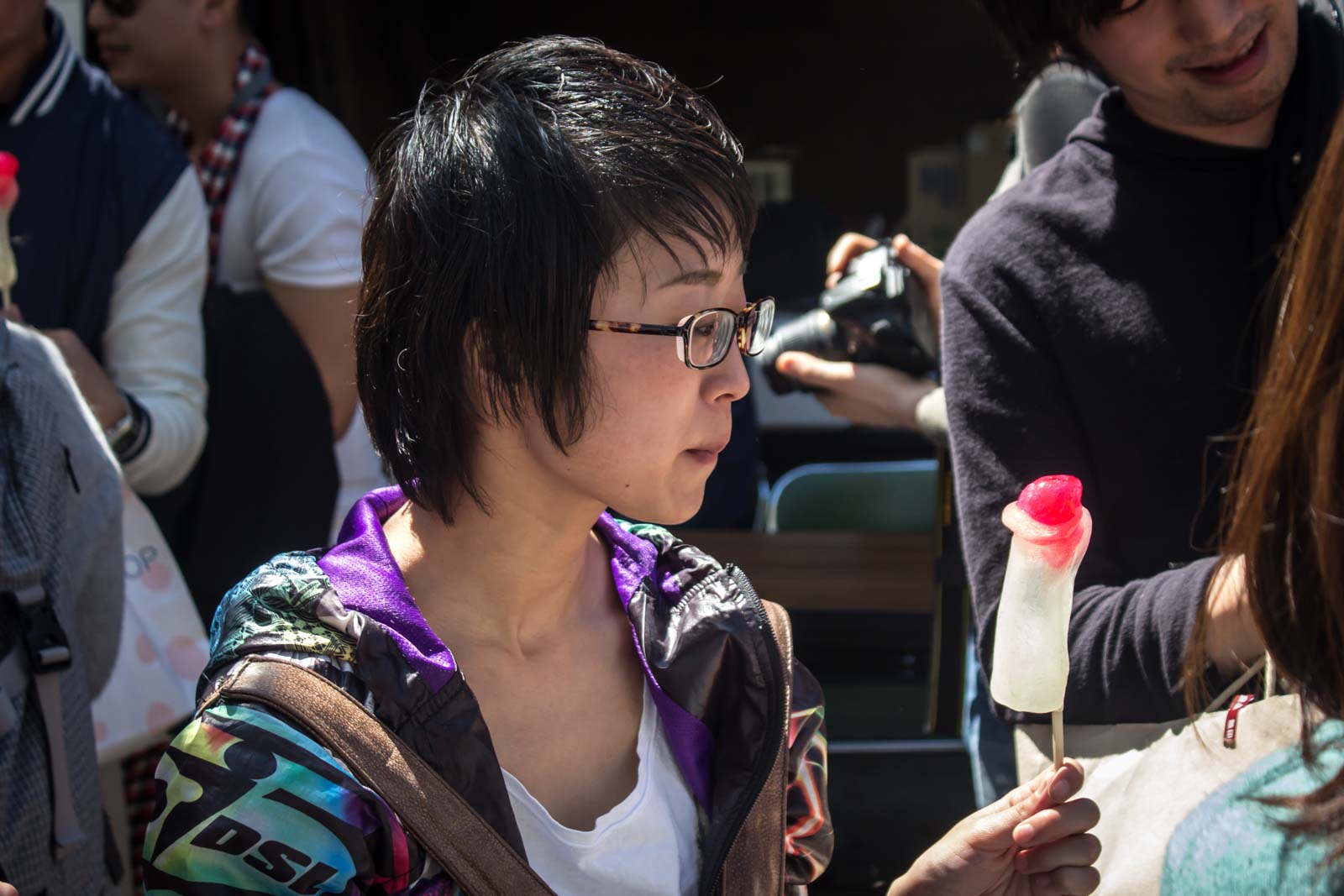 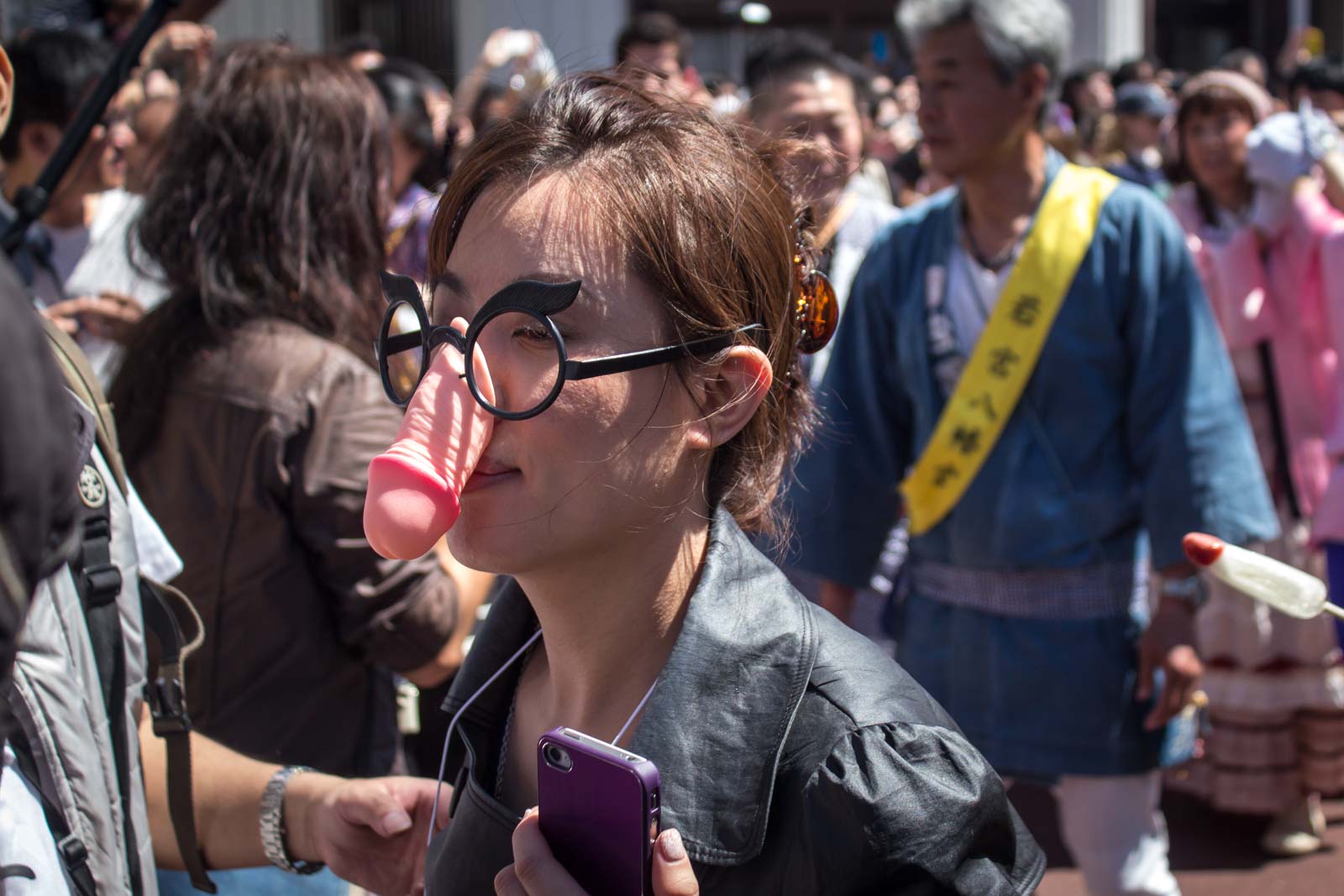 There’s hardly room to move and you often have to push your way through all the people. But, in honour of the origins, the festival raises money for HIV research so at least it’s a good cause.

For one day these penises get to shine. But, hey, it’s tradition, right?