They’ve got the right idea, these monkeys.

It is so cold outside – below freezing – and I’ve lost feeling in my toes. I’ve got on three layers of clothes – two of them wool – and the warmest woolen hat I have. Yet still I can feel the icy air cutting at me.

Oh, how I wish I was in that steaming onsen with its natural hot waters. 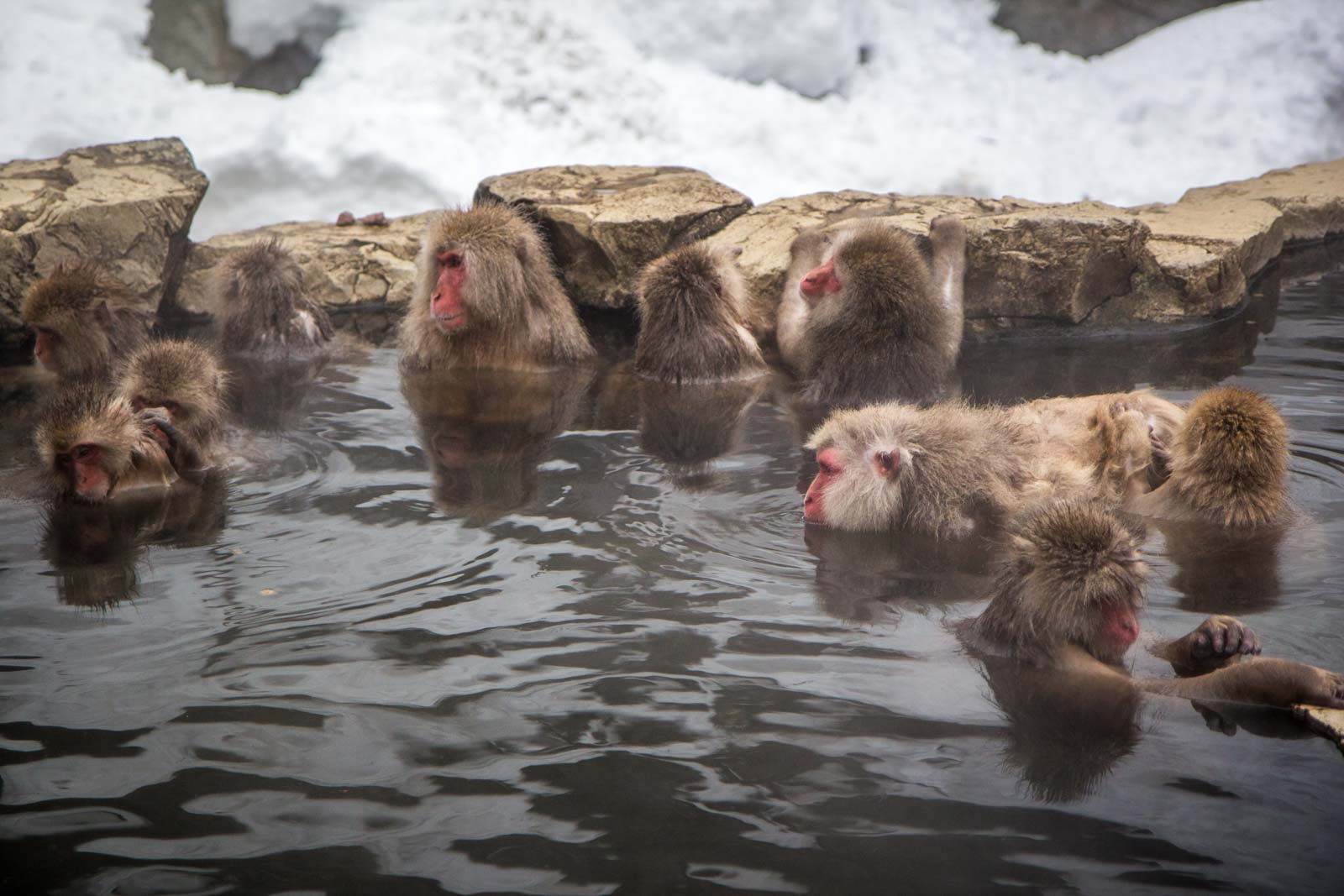 I guess we’re quite alike, the monkeys and me.

It’s strange to think that animals would have the same reaction to the cold as humans. Normally you think of native animals that have adapted to their surroundings and act like… well, animals.

Sure, penguins in Antarctica might huddle together but they’re not building igloos. 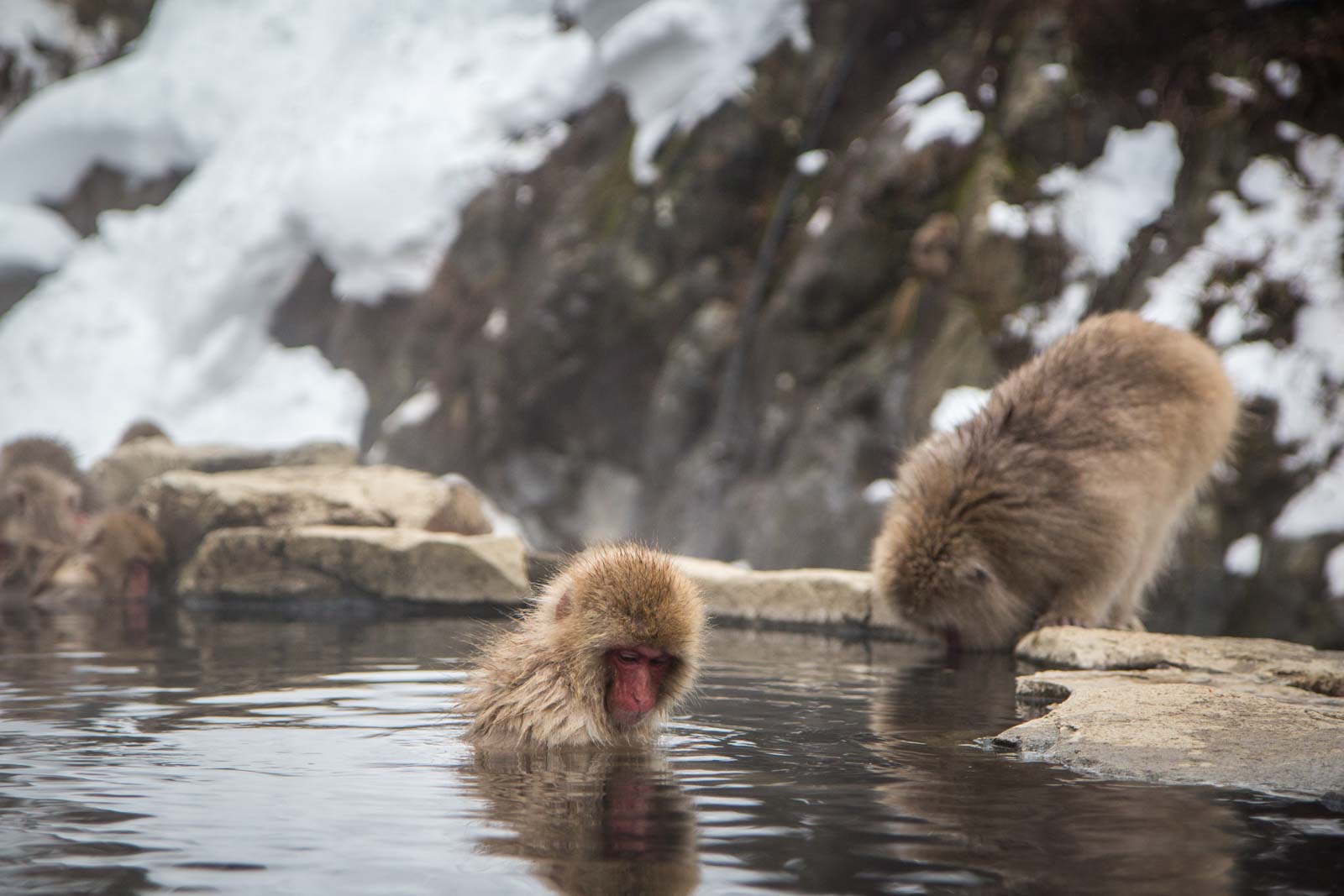 That’s why it’s such a strange sight to see these Japanese macaques (or snow monkeys, as they’re also called) doing exactly what the Japanese people do in the winter – soaking in a natural hot spring up in the mountains.

And you can understand why it brings plenty of visitors here to the Jigokudani Monkey Park near Nagano each year. 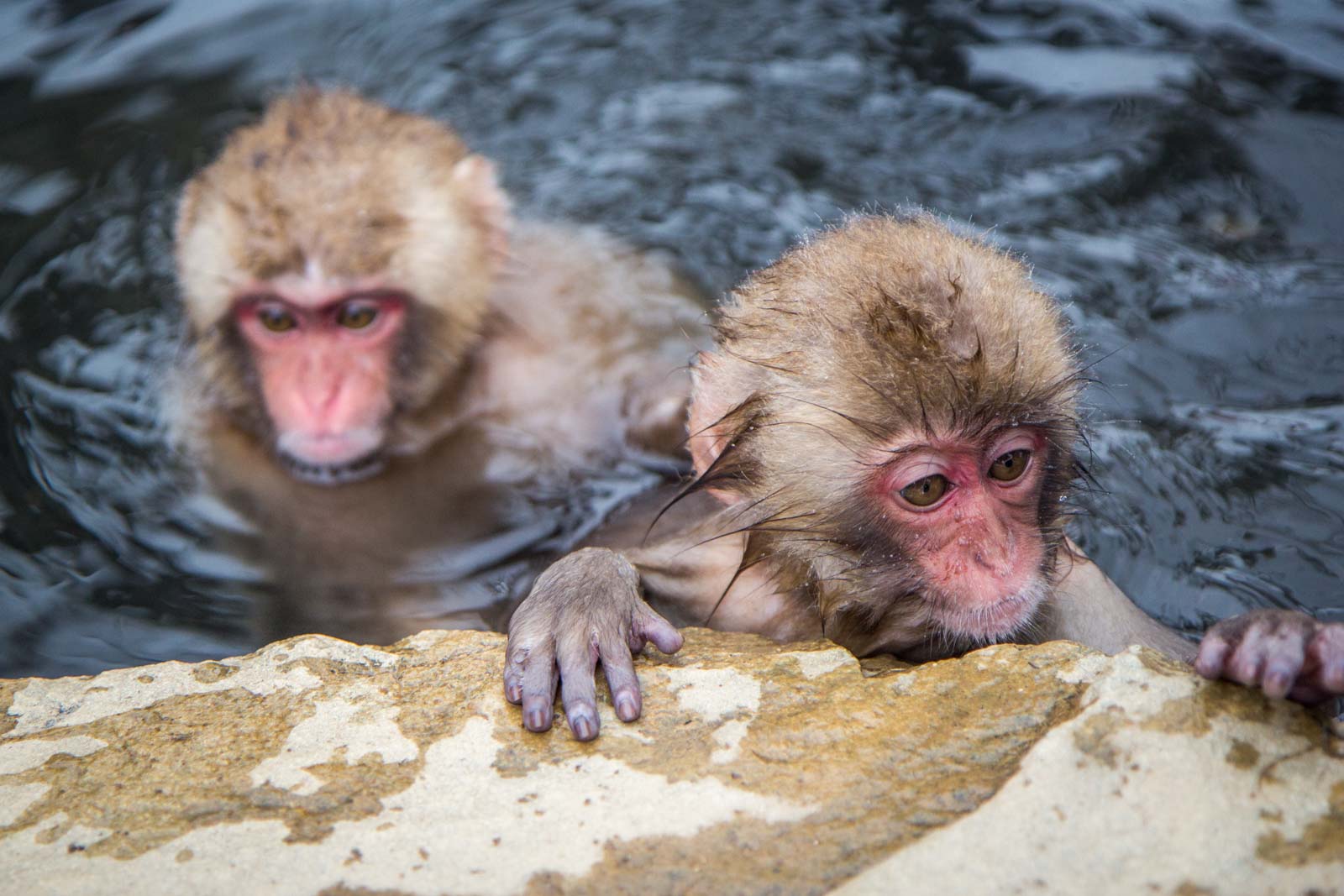 There’s definitely something very cute about the whole scene. But I find it a little bit unnerving too, I have to admit.

It’s got a touch of ‘Planet of the Apes’ about it. It’s almost as though these cute little snow monkeys are becoming more like us humans by using the onsen – maybe at a rate we don’t understand.

They show no shame or humility about that either. 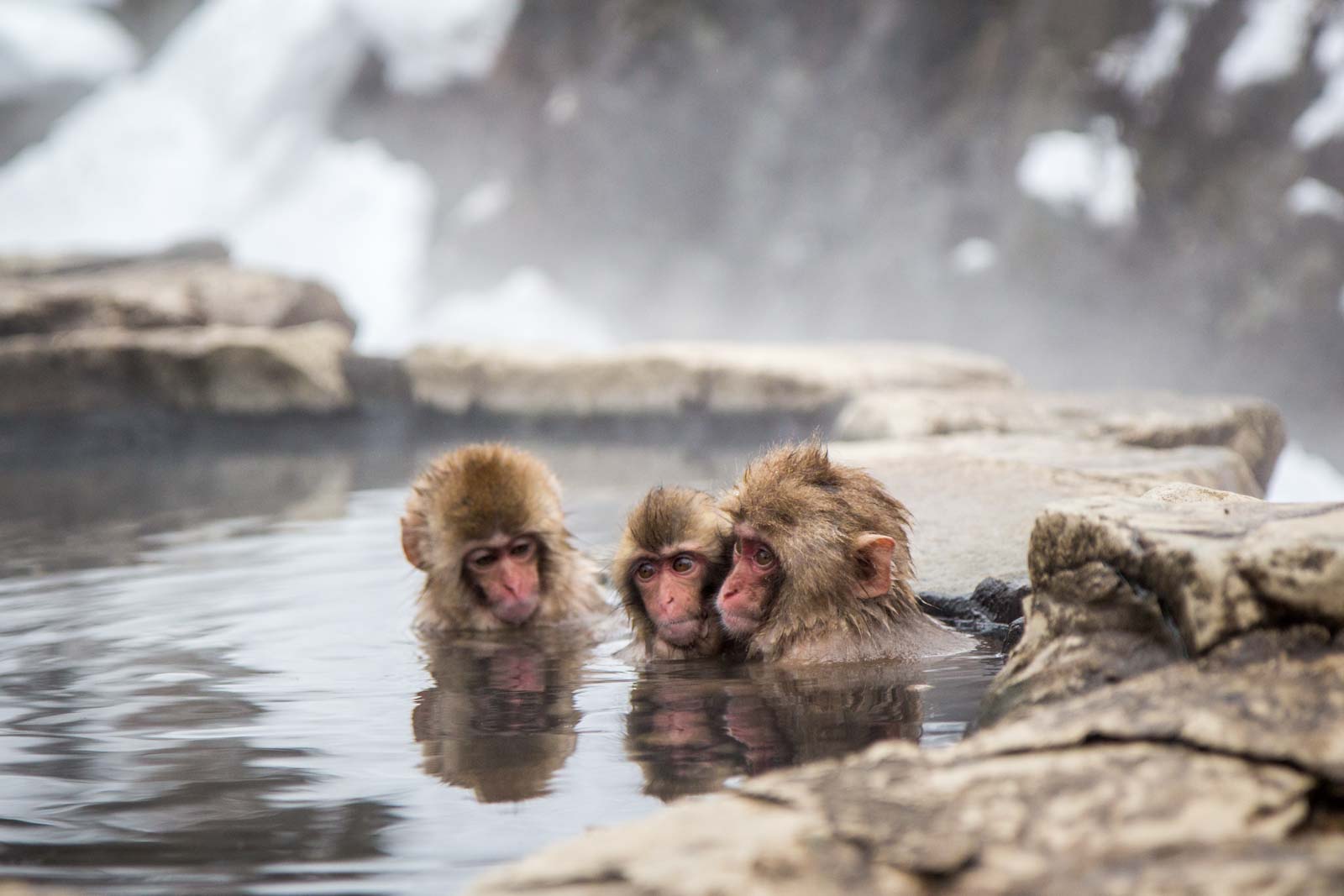 As I watch them, the macaques just stare casually back at me and relax even more into the hot water, giving a look that makes me wonder if they know something I don’t. Perhaps about a monkey revolution that will start at any moment. 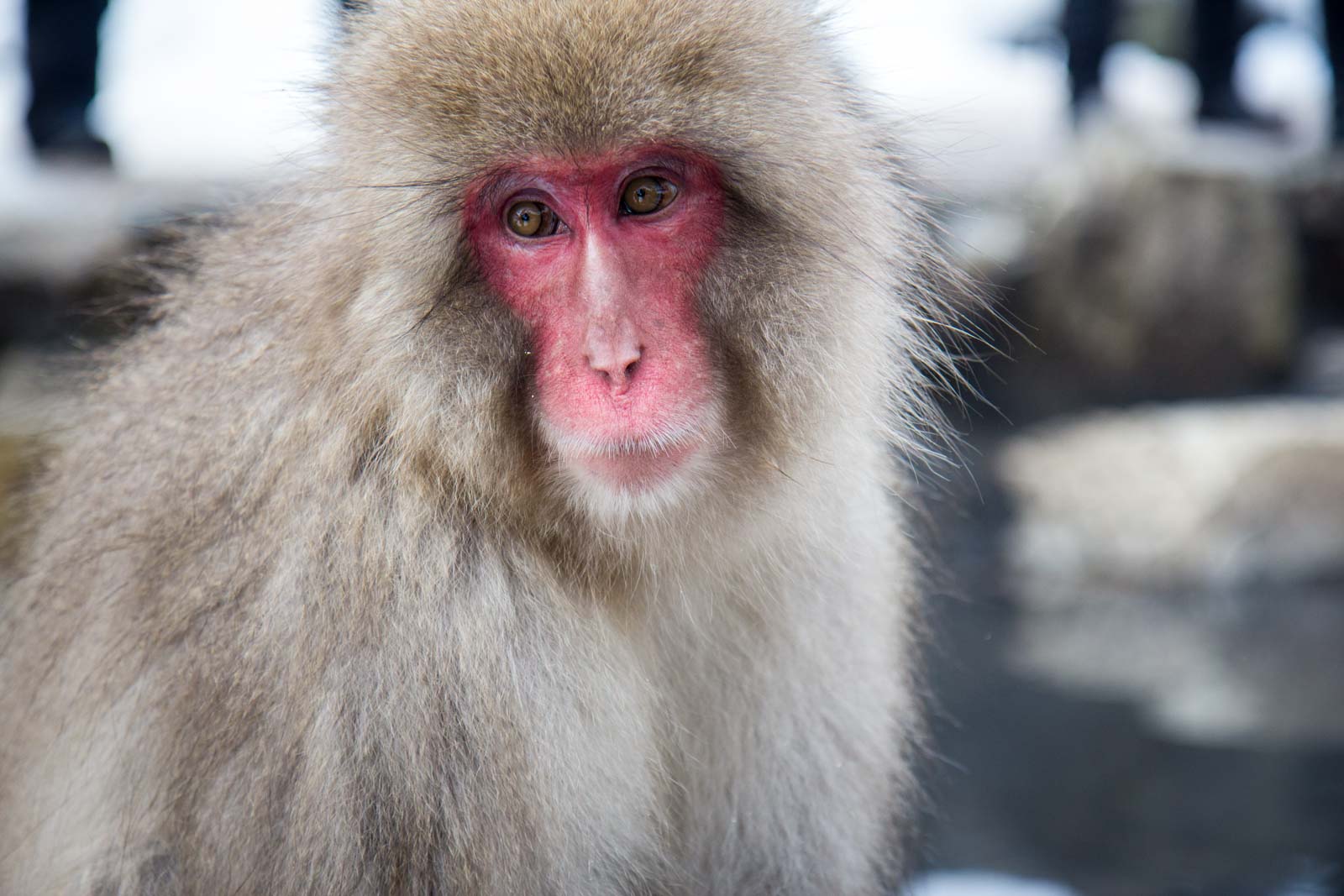 There’s no snow coming down right now at Jigokudani Monkey Park but the landscape in every direction is white from the latest fall.

There’s a fast flowing river running through a ravine and the onsen is perched about ten metres above it, on somewhat of a cliff. The slope continues up even further and monkeys are running all over it. 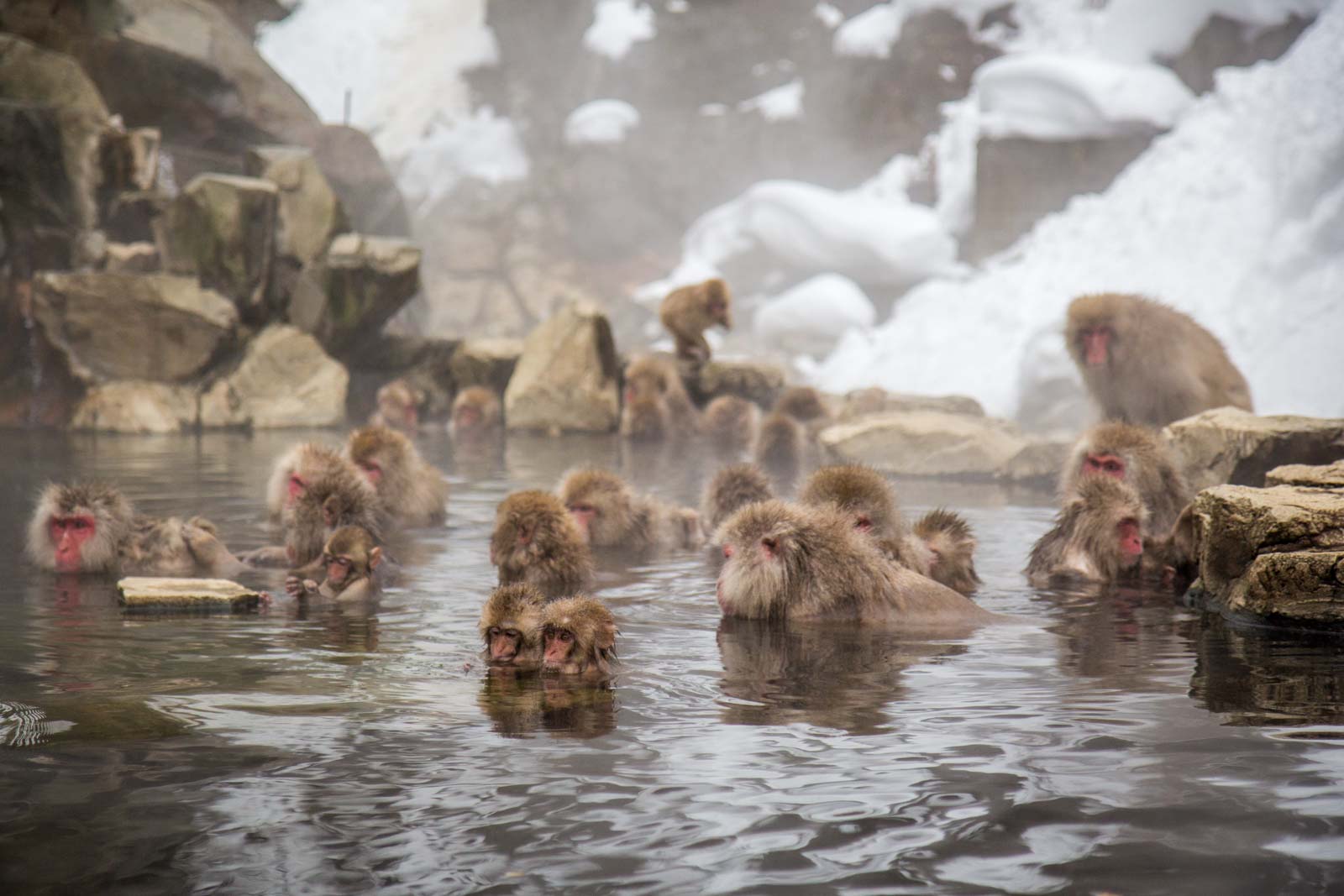 The water in the hot spring is about 42 degrees Celsius – perfect for keeping warm in these icy conditions. But the monkeys can easily survive without it and seem to use the onsen more for comfort.

Some of them will sit in the pool, while others will spend most of the day running around the mountain, climbing in the forest or hanging on the river bank.

At night they all head for the trees and sleep on branches in the forest. The next morning, after waking up at dawn, they forage for breakfast and then make their way back to the hot spring area. 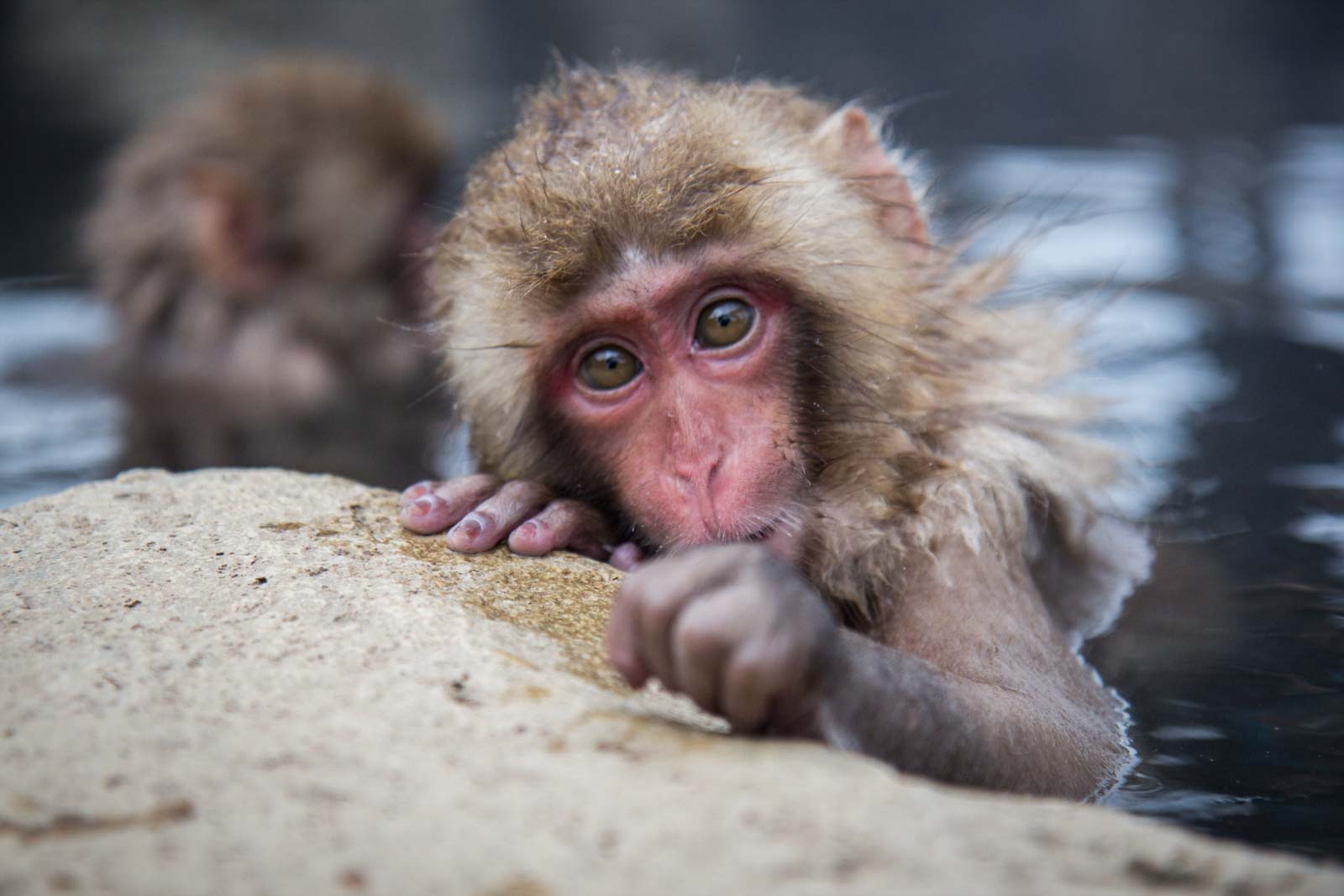 The snow monkeys have a routine during these cold winter months and I imagine they’ve got used to each day involving humans. There is a decent sized crowd of visitors at the onsen for the hour that I’m here but it’s never so large that it’s annoying.

Perhaps the numbers are controlled somewhat by the two kilometre walk along the icy forest path that is the only way to access the site. 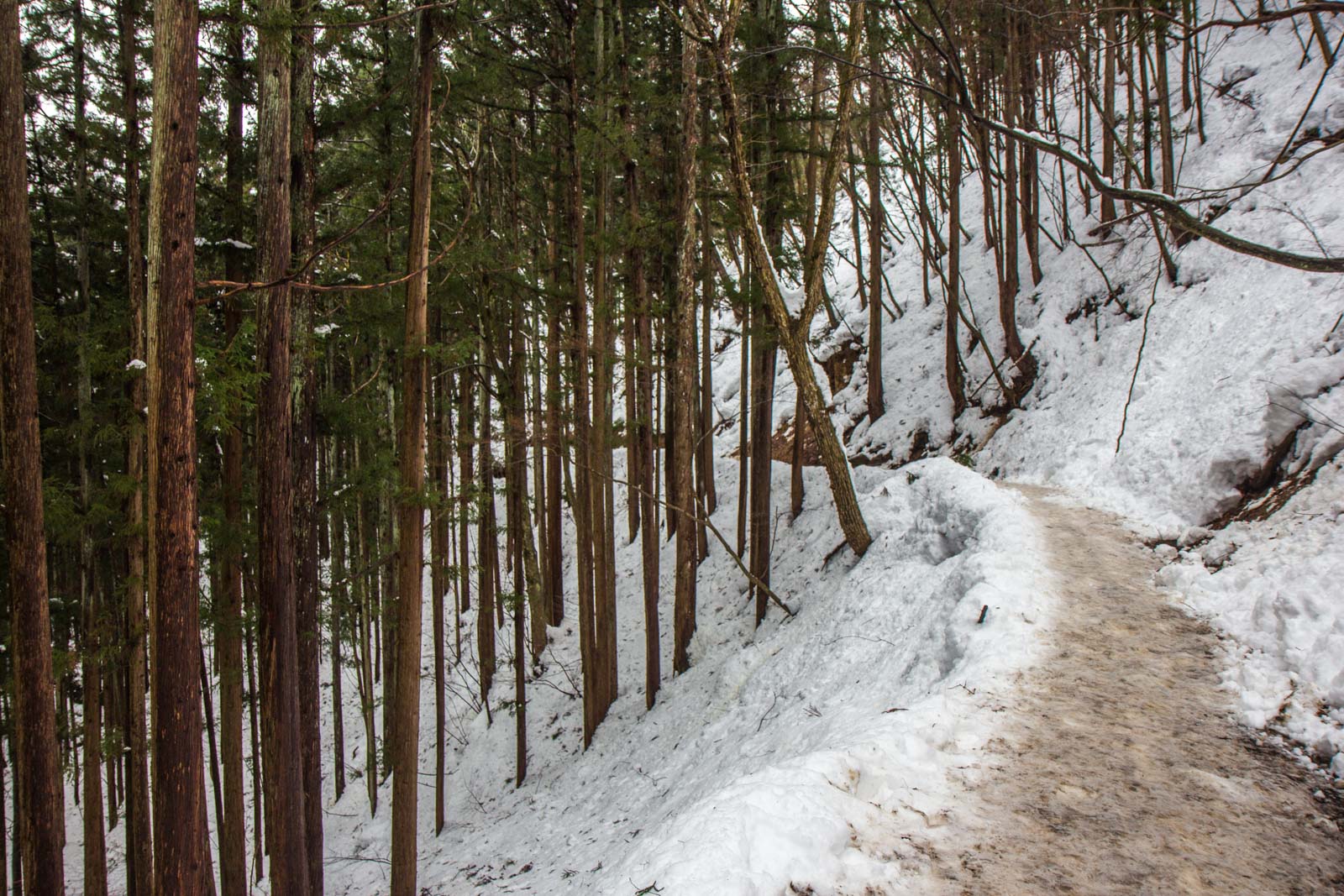 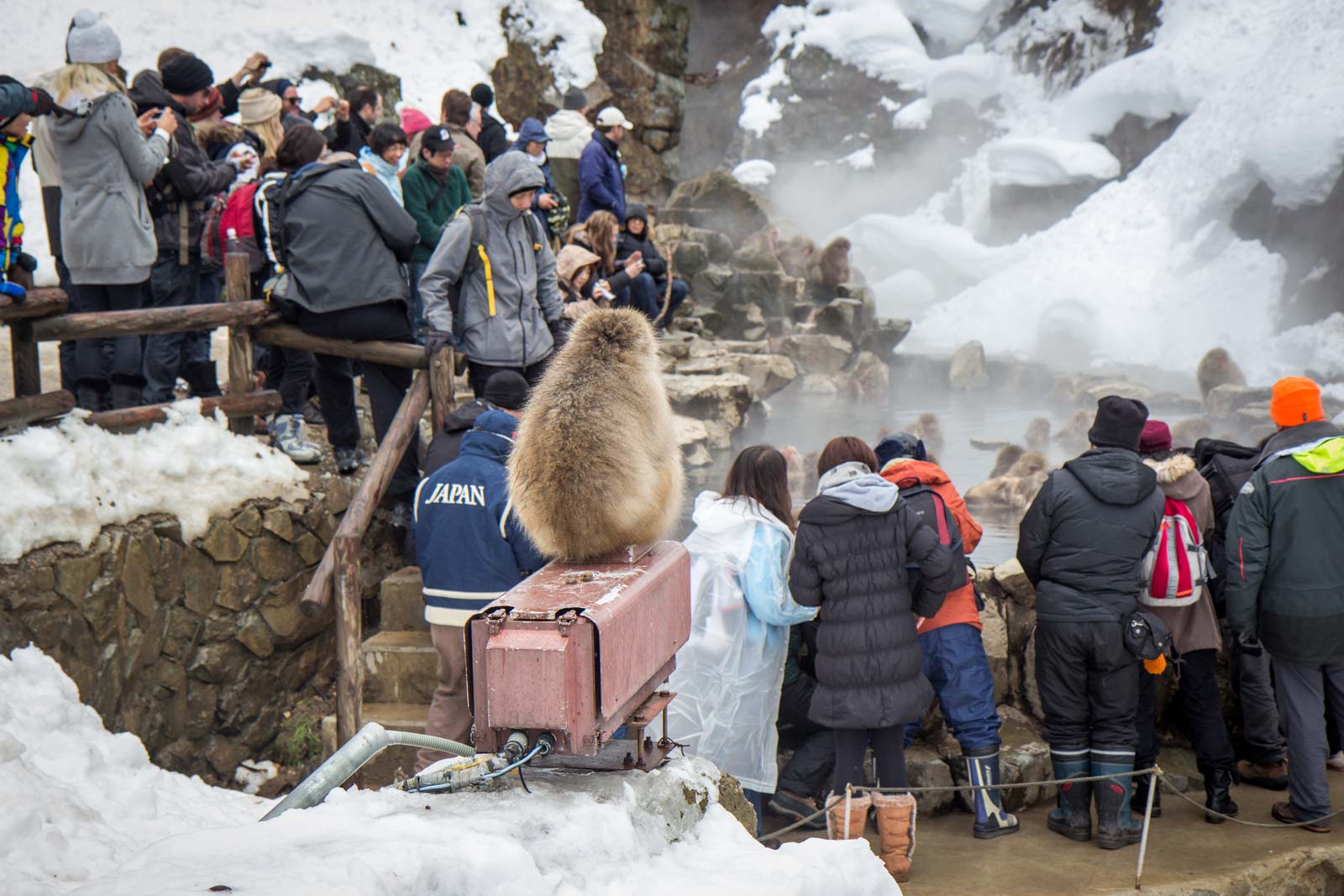 You wouldn’t want there to be too many more tourists here, though. The onsen is actually much smaller than I imagined – about the size of an average backyard pool – and you can only stand around half of it.

It means there are limited spaces to get a clear view or photograph of the snow monkeys. But, if you have one of the front row spaces, you will be face to face with these cute (potentially revolution-scheming) animals.

They will come right to the edge and then pretend to ignore you, they’ll jump over you from behind when they’re coming back to the pool from a hillside excursion, and they’ll even – as happened to me – roll right over your feet while they’re fighting each other. 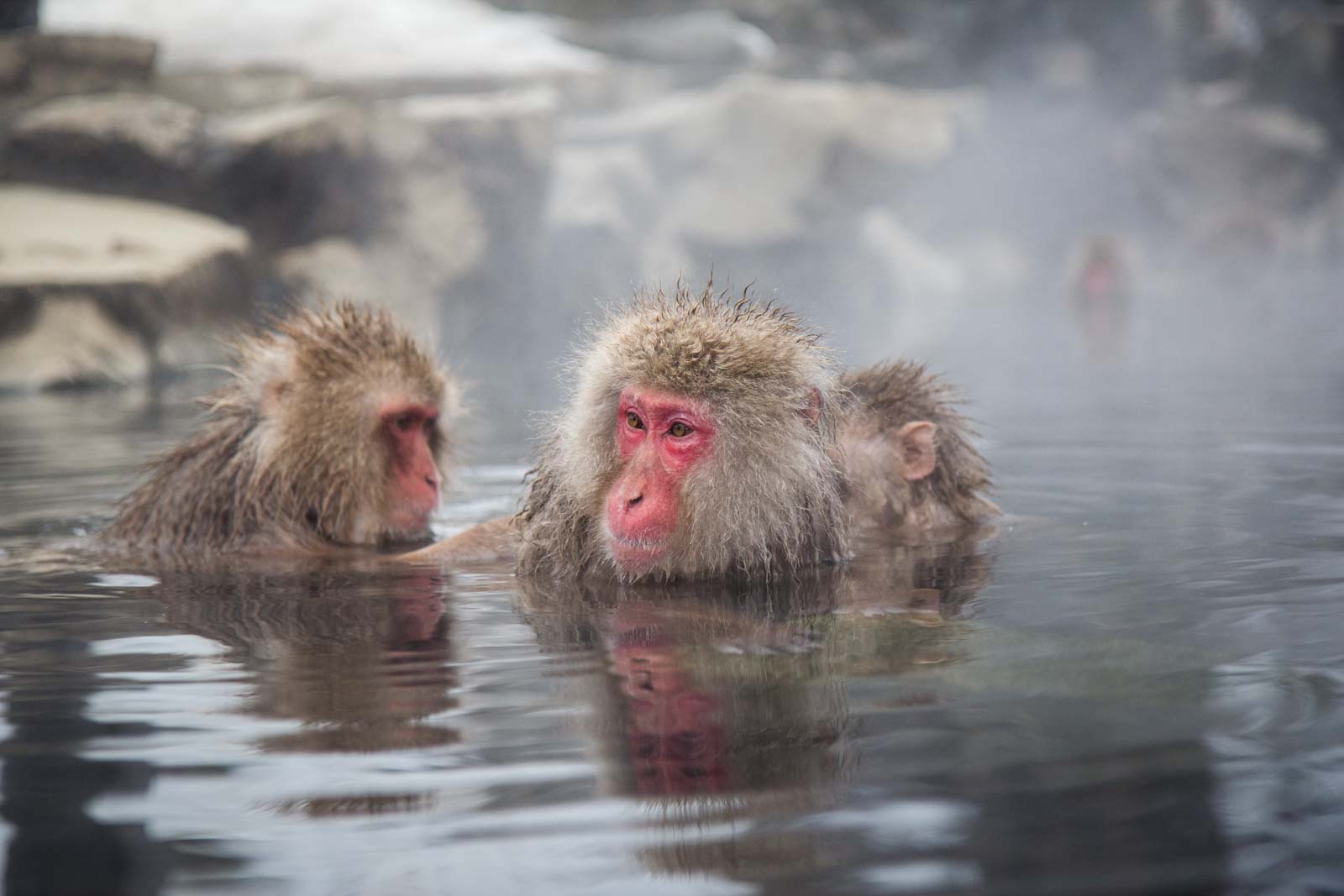 And they know how to pose, these monkeys.

From the tiny babies with their big innocent eyes to the alpha males who close their eyes and throw their head back in ecstasy, the faces of the macaques are so expressive.

I am taking far too many photos because there’s a constantly changing performance on stage in front of me.

Although, of course, the animals are probably not doing this for our benefit. They seem so disinterested in us, we might as well be rocks. 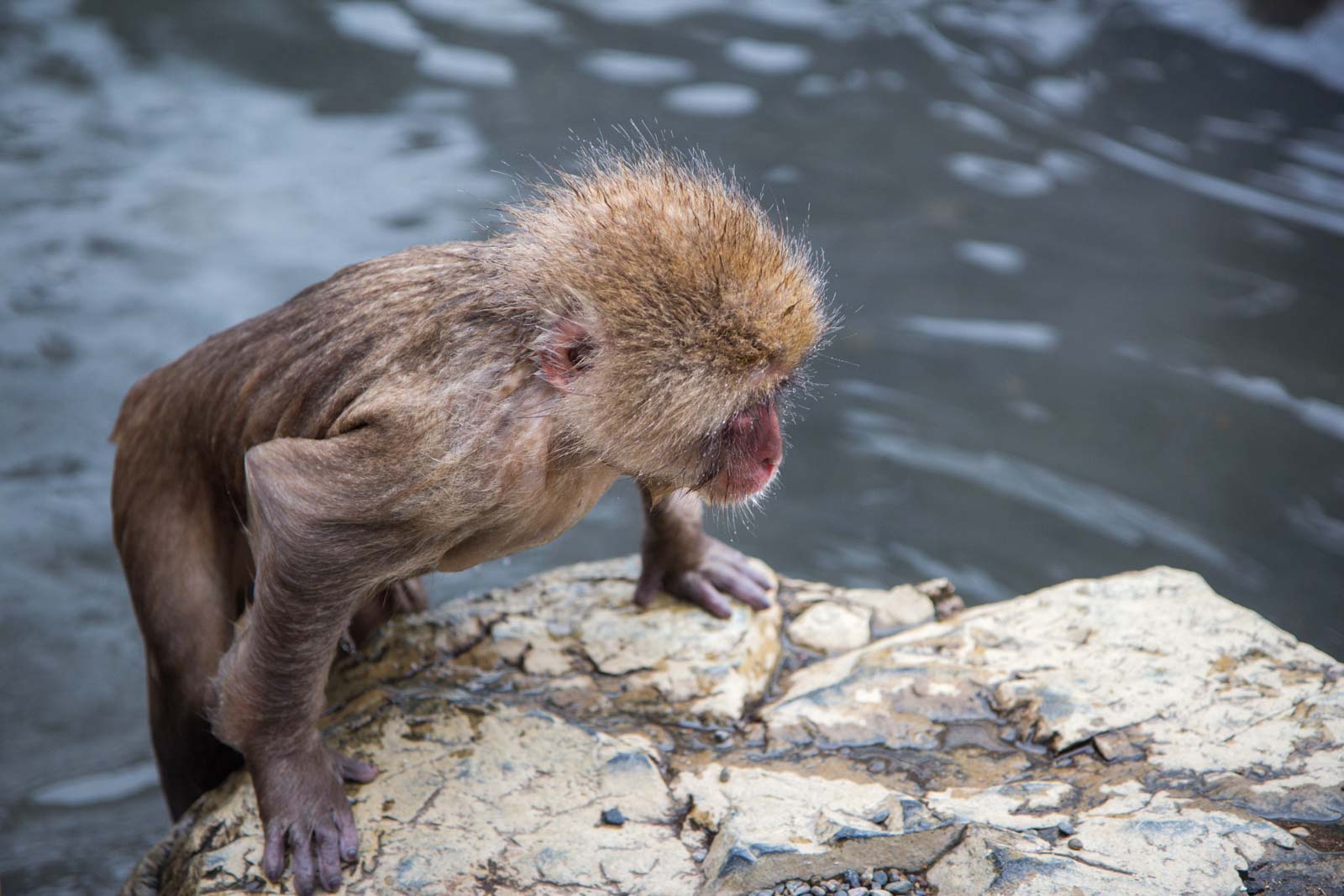 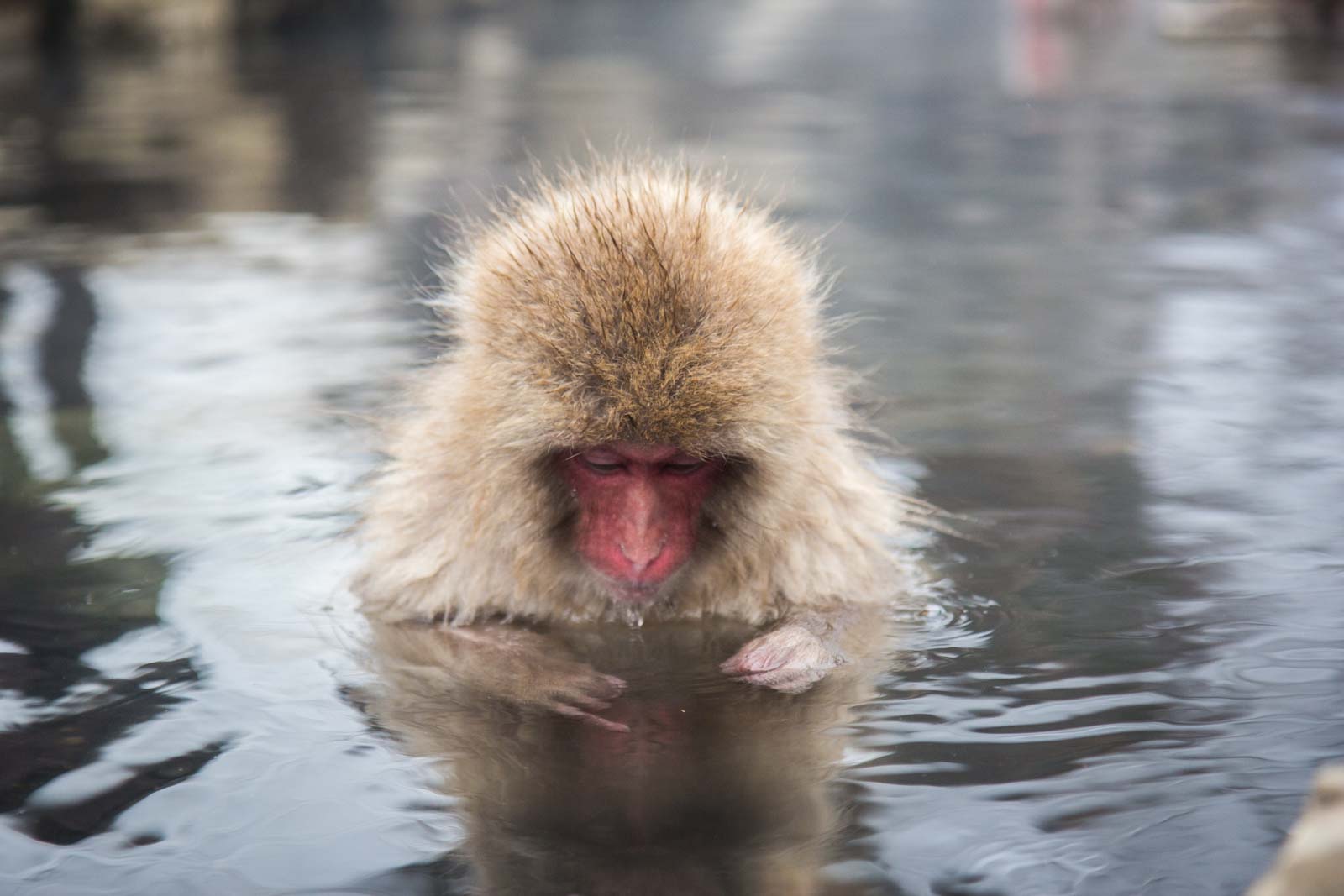 I could stay here and watch them for hours but I fear my toes may soon fall off from the crowd.

It’s with some reluctance that I eventually head back towards the forest path and away from the onsen. As I stamp my feet and clench my fists to get the blood pumping, I think about the evening ahead. There’s a good chance it’s going to include an onsen. 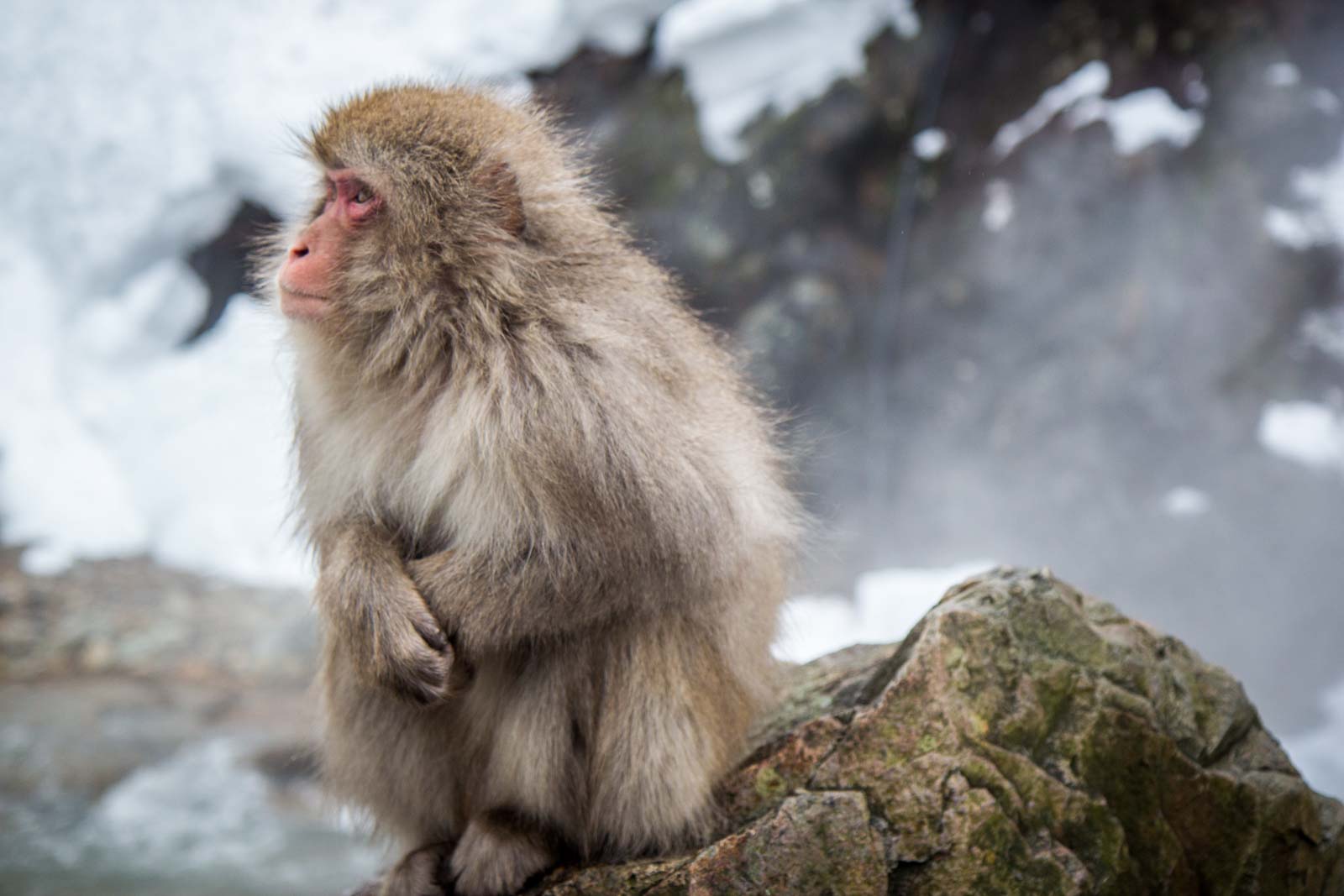 I guess we’re quite alike, the monkeys and me. And I still find that a bit unnerving.

Time Travel Turtle was a guest of the Japan National Tourism Organisation but the opinions, over-written descriptions and bad jokes are his own.