Things to see in Conwy, Wales

Along the waterfront of Conwy, there’s a building that proudly proclaims to be the smallest house in Great Britain. It certainly looks little… but how can you be so sure it’s the smallest? 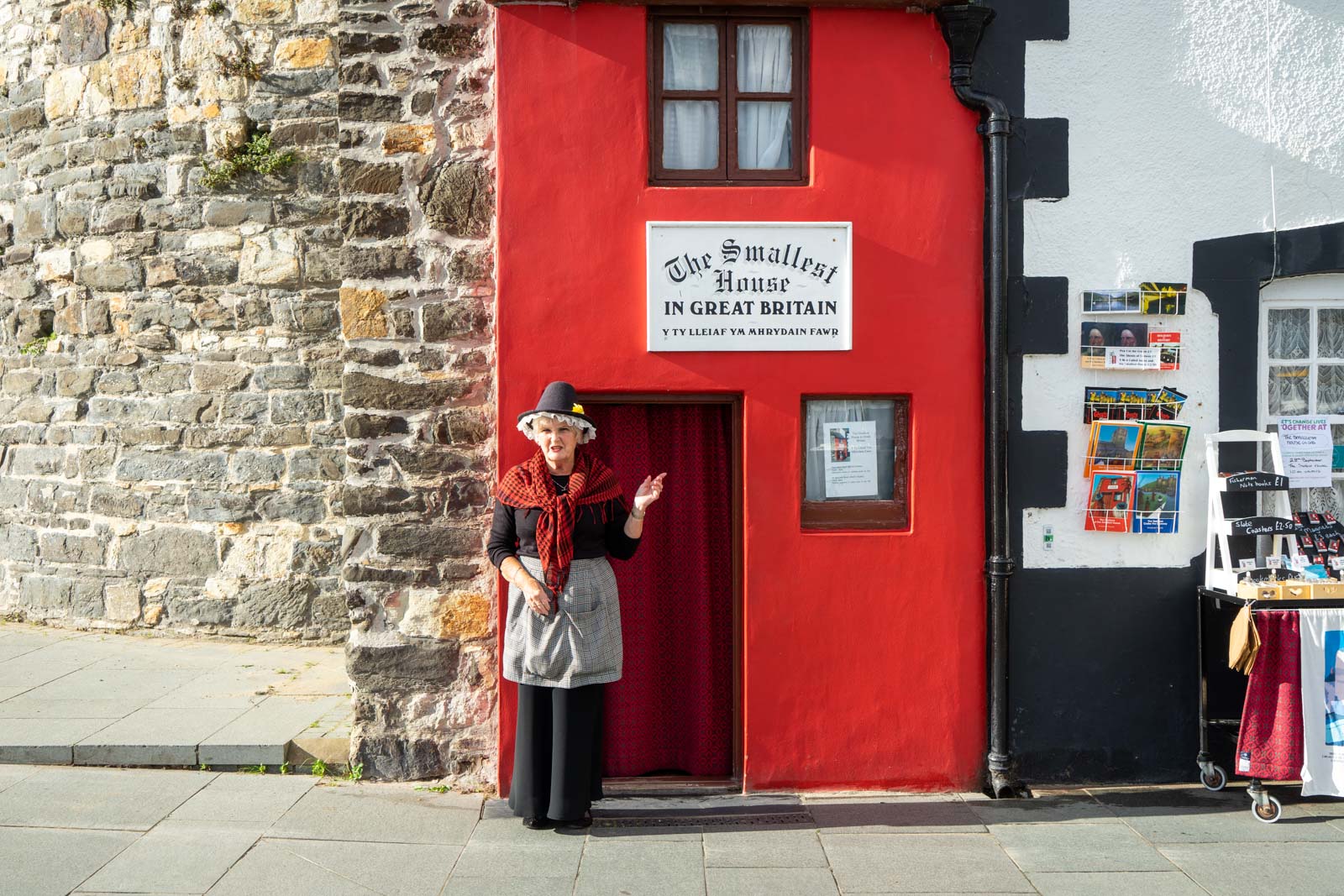 Well, because apparently one of the previous owners made it his mission to travel around Britain and measure any other houses that said they might be smaller. When he was satisfied he was right, the title became “official”.

The smallest house in Britain is 1.8 metres wide and 3.1 metres tall and you can pop in and have a quick look (it doesn’t take long) for £1. But it’s not the main attraction here in Conway. From the entrance of the house, you need only look 300 metres to the south to see the most important part of the city – Conwy Castle, rising up from the bank of the river.

In fact, everything in Conwy is just minutes away from each other – at least, as far as the historic centre is concerned.

Before I go to the castle, I take a walk around the town walls, which were built as part of the castle complex and finished in about 1286. They are one of the finest examples of medieval walls of this kind in Britain and it’s quite incredible that you can still walk almost the entire length of them. 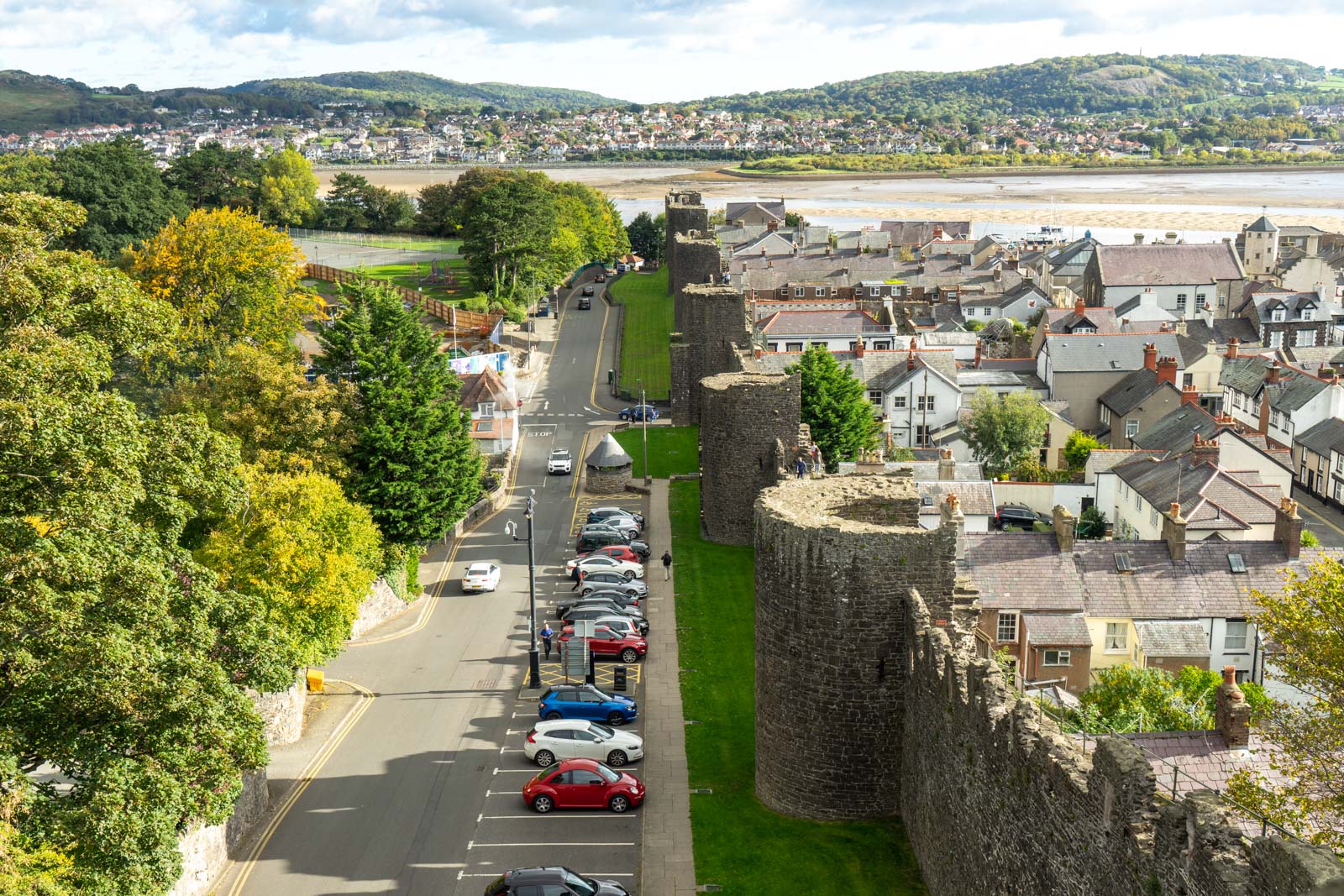 The Conwy town walls are about 1.2 kilometres long and have 21 defensive towers along the stretch. On average, the wall is about 9 metres high and the towers are about 15 metres high. You can imagine, standing atop them, what a strong defensive position you would have.

Within the walls, you’ll find the historic centre of Conwy. Almost all that was here in the 13th century when the walls were built no longer remains. But there’s still plenty to see in the compact town. 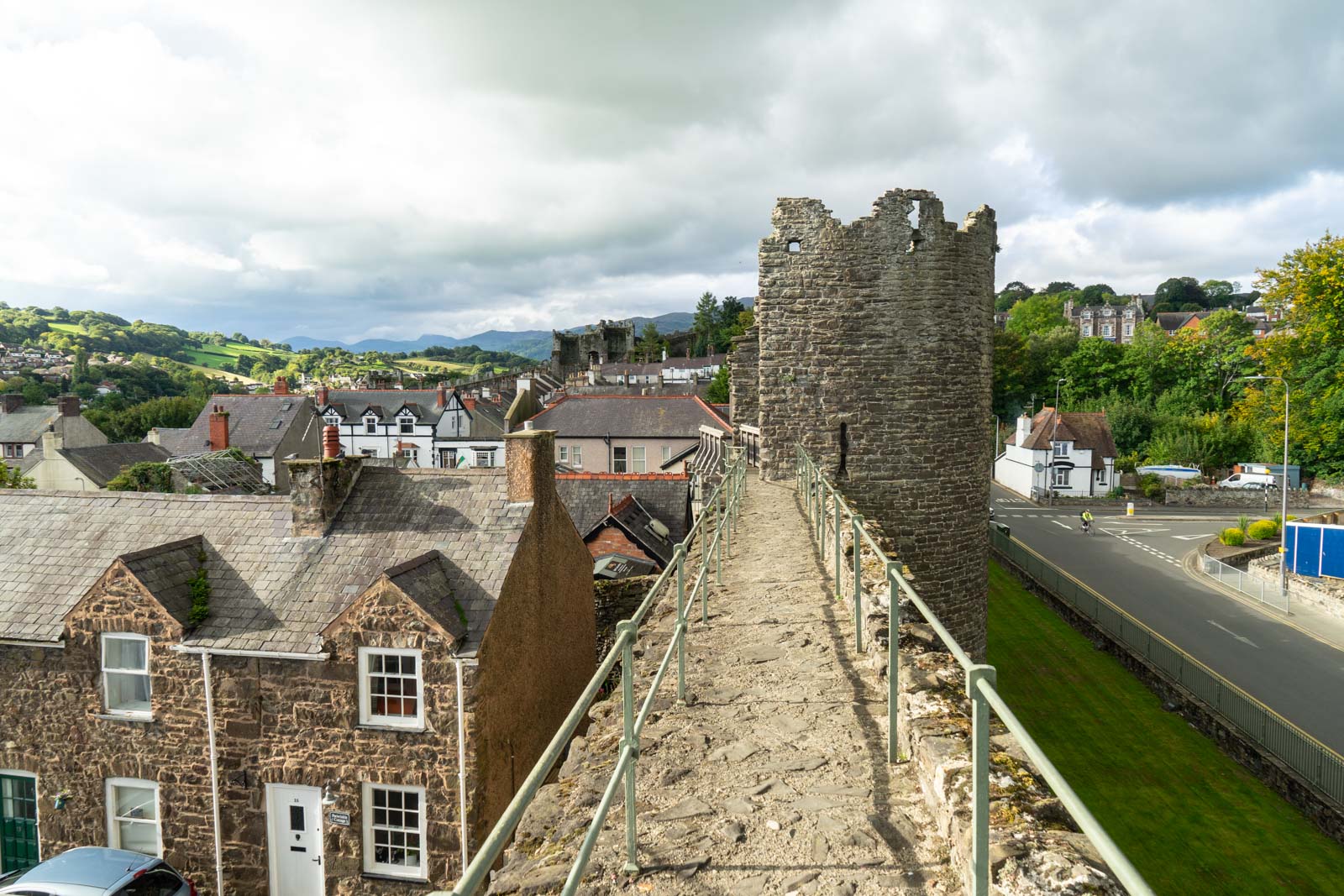 There’s Conwy Quay, which is still used by fishermen to unload their catches. One of the main products here is mussels and there are a few stores selling them fresh. The quay is also a good spot to have a rest, with some fish and chips or a drink from the Liverpool Arms. 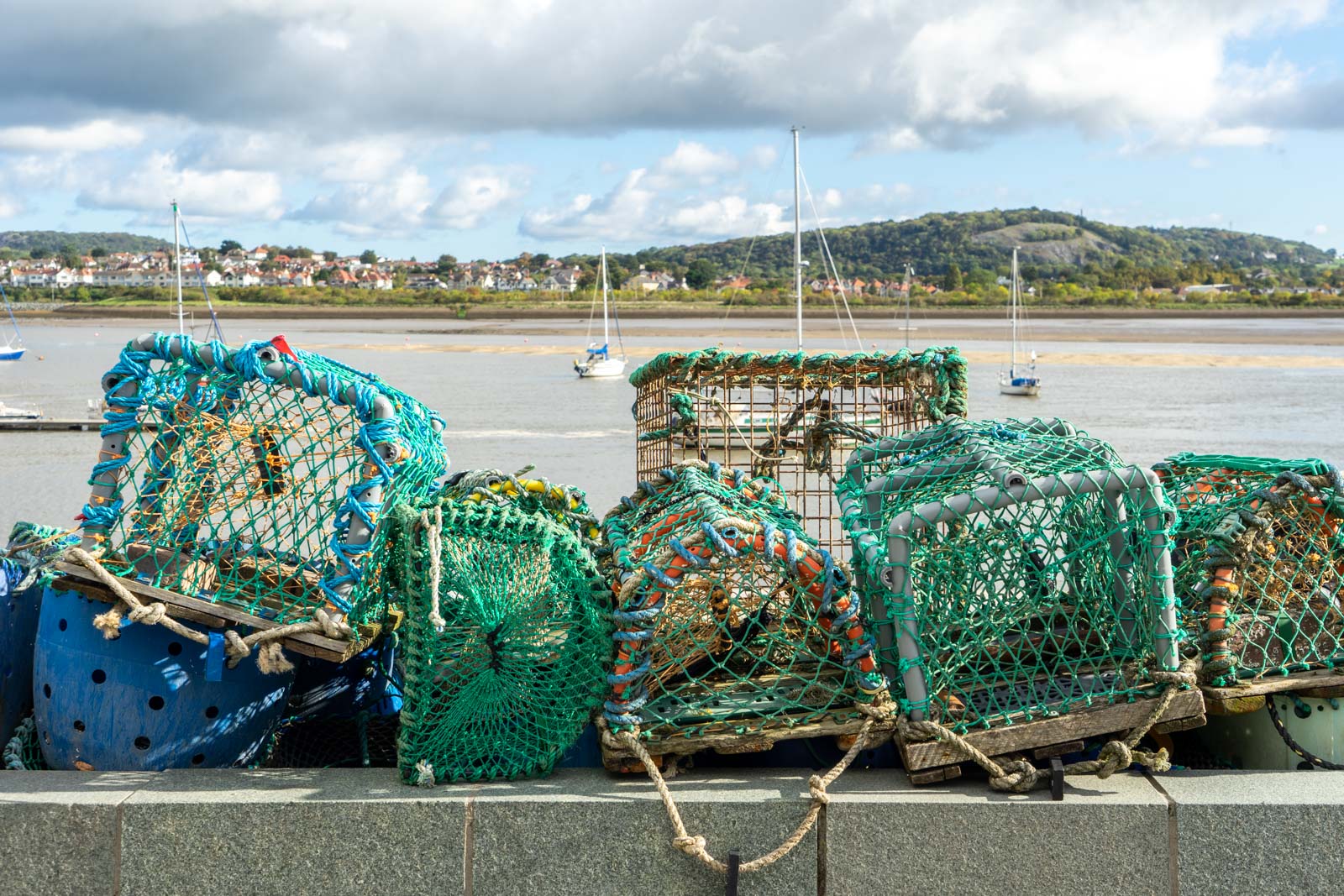 Not far from Conwy Quay is Aberconwy House, a merchant’s house from the 14th century that has been restored to the period design. You can go inside and see the uneven walls and floors for yourself.

Further up the High Street is the impressive Plas Mawr. This townhouse is from the 16th century and is an excellent example of how the wealthy residents of Conwy lived during the Elizabethan period. 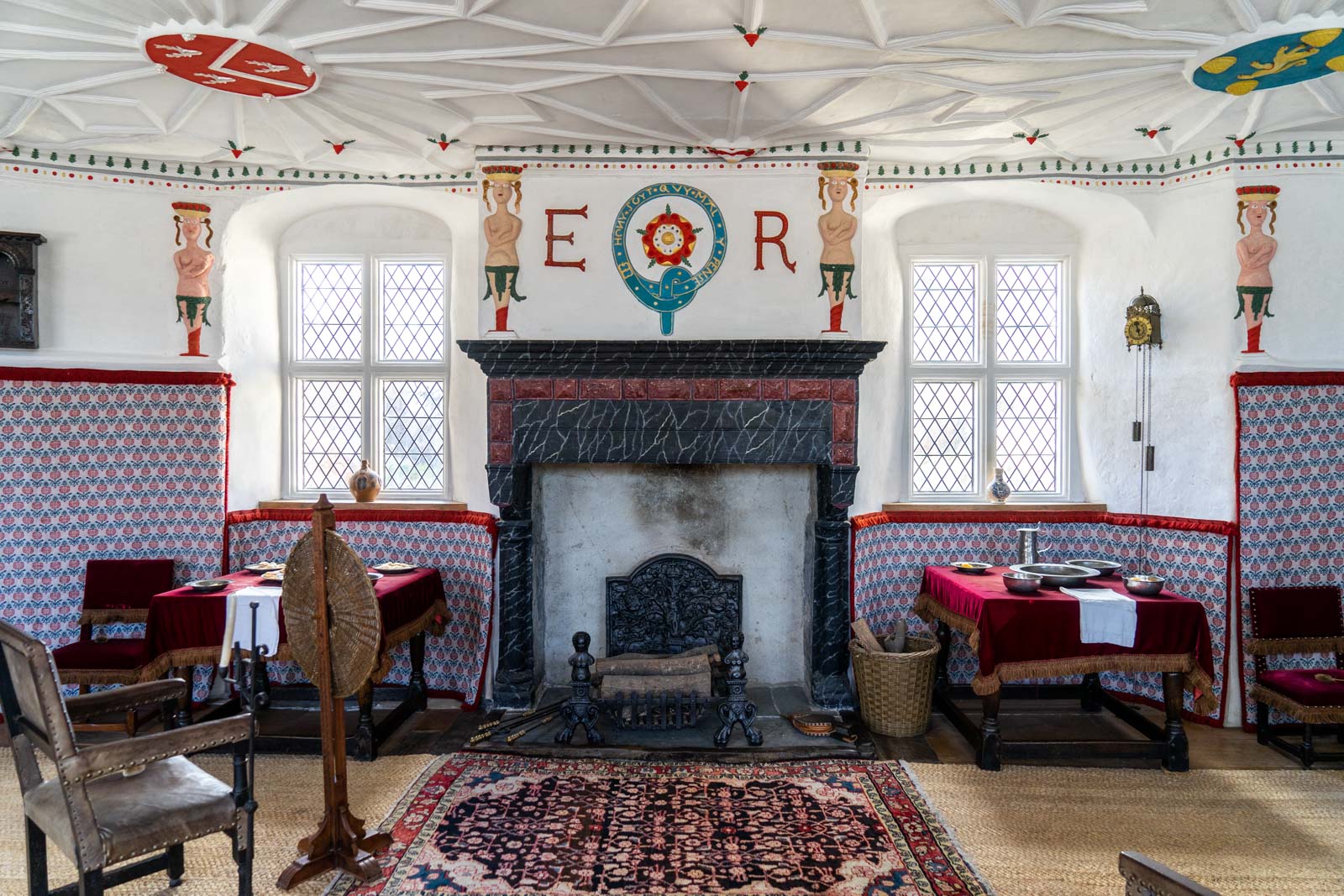 There are quite a few rooms for you to walk through and explore – and it’s worth climbing to the top for views across the town.

And don’t miss St Mary’s Church in the centre of historic Conwy. It’s actually surrounded by buildings these days so you’ll need to go down one of the alleys to find it. 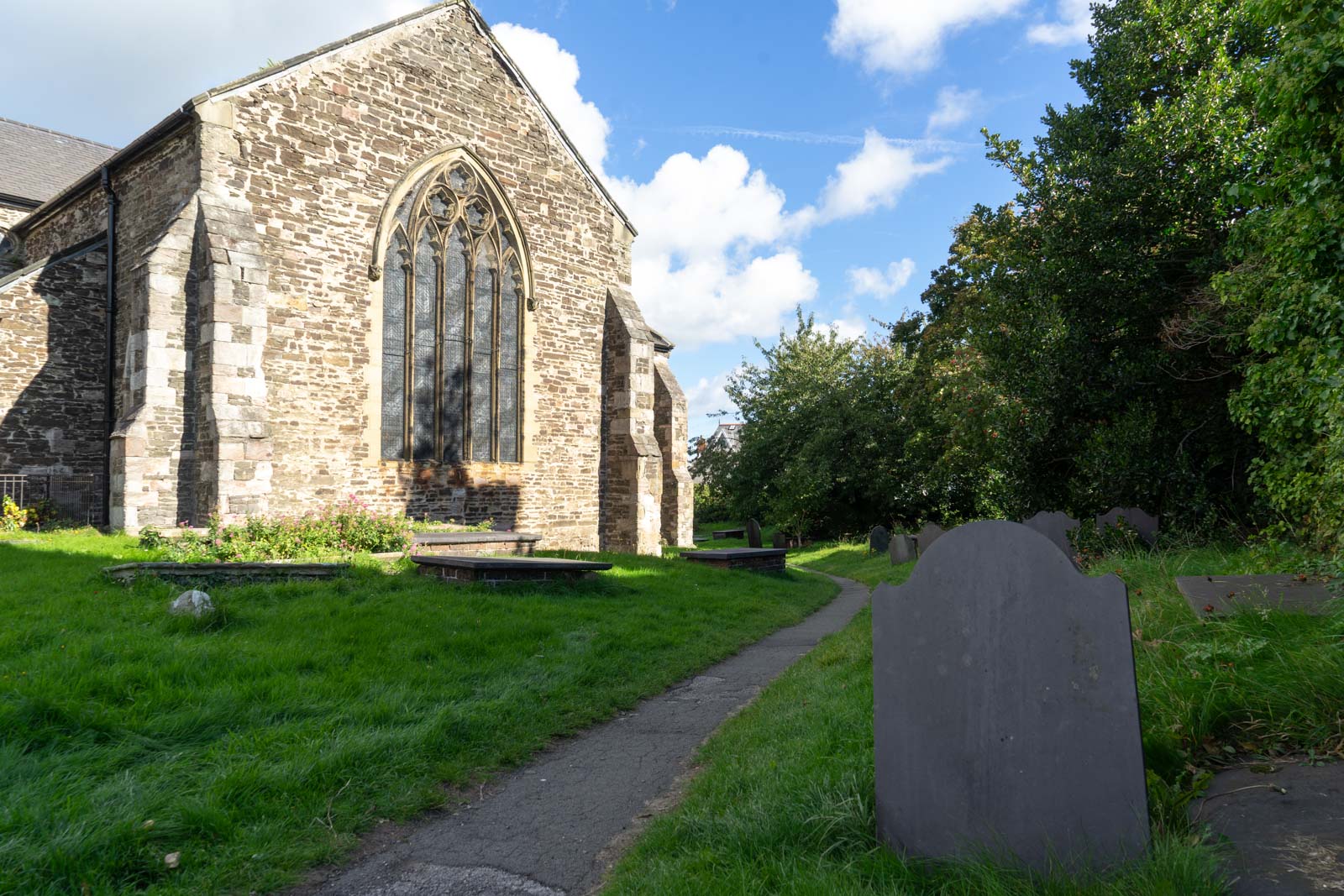 St Mary’s Church began as a Cistercian Abbey in the 12th century and was the original burial place of the Welsh prince, Llywelyn the Great.

But, of course, the true star of Conwy is the castle – the reason that the town exists at all.

Conwy Castle was built by Edward I between 1283 and 1289 during the English king’s conquest of Wales. He chose this spot partly because of its strategic position at the mouth of a river on the north coast. But it was also a symbolic demonstration of power because the site had religious significance to the Welsh.

It’s a magnificent castle and experts consider it to be one of the best medieval fortifications in Britain. 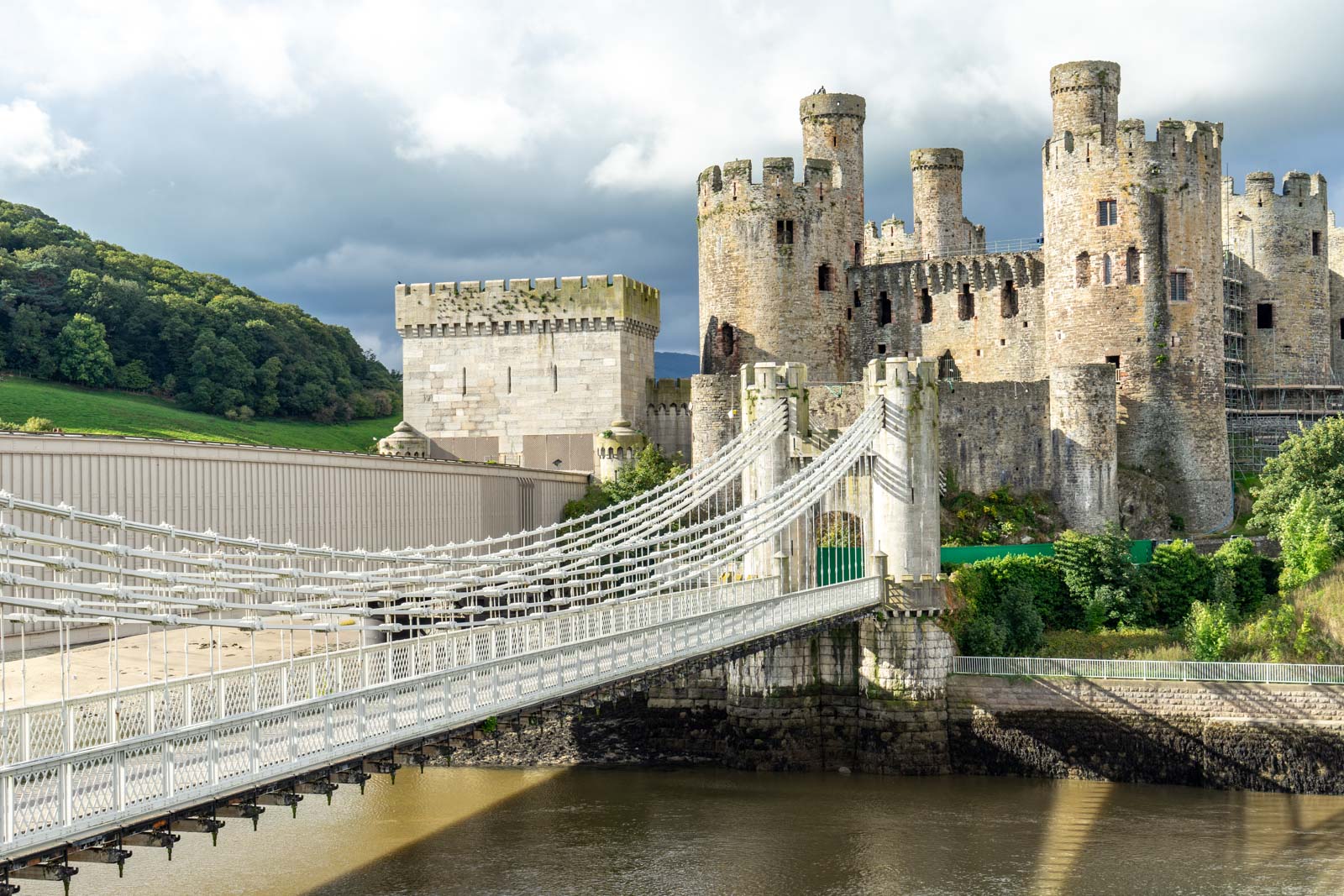 From the outside, you can see that the castle sits on a rocky outcrop, giving it even more height and grandeur. There are two fortified gateways and eight massive towers. While you might say the castle is in ‘ruins’ because most of the rooms don’t have roofs or proper flooring, you certainly still feel like you are walking through a grand royal fortification and you can get a sense of where everything would once have been. 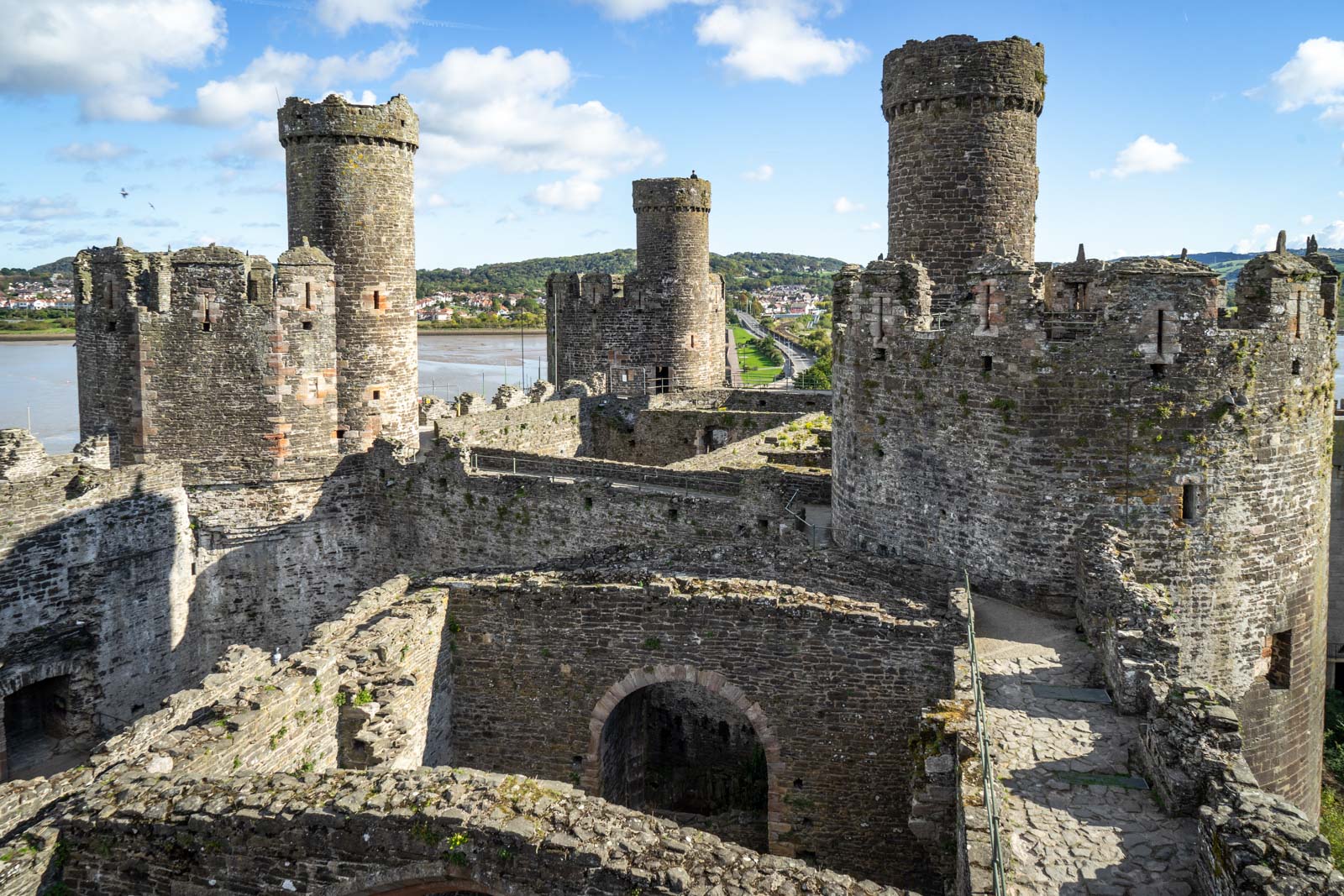 There’s actually quite a bit to explore within Conwy Castle and you can go down into the lower floor and up the towers for spectacular views across the town, the river, and over to the mountains.

Over the centuries, the castle was used by other English and Welsh rulers and played important roles in the wars that raged during the ebb and flow of power in this part of Britain. But it fell into ruin in the 17th century. 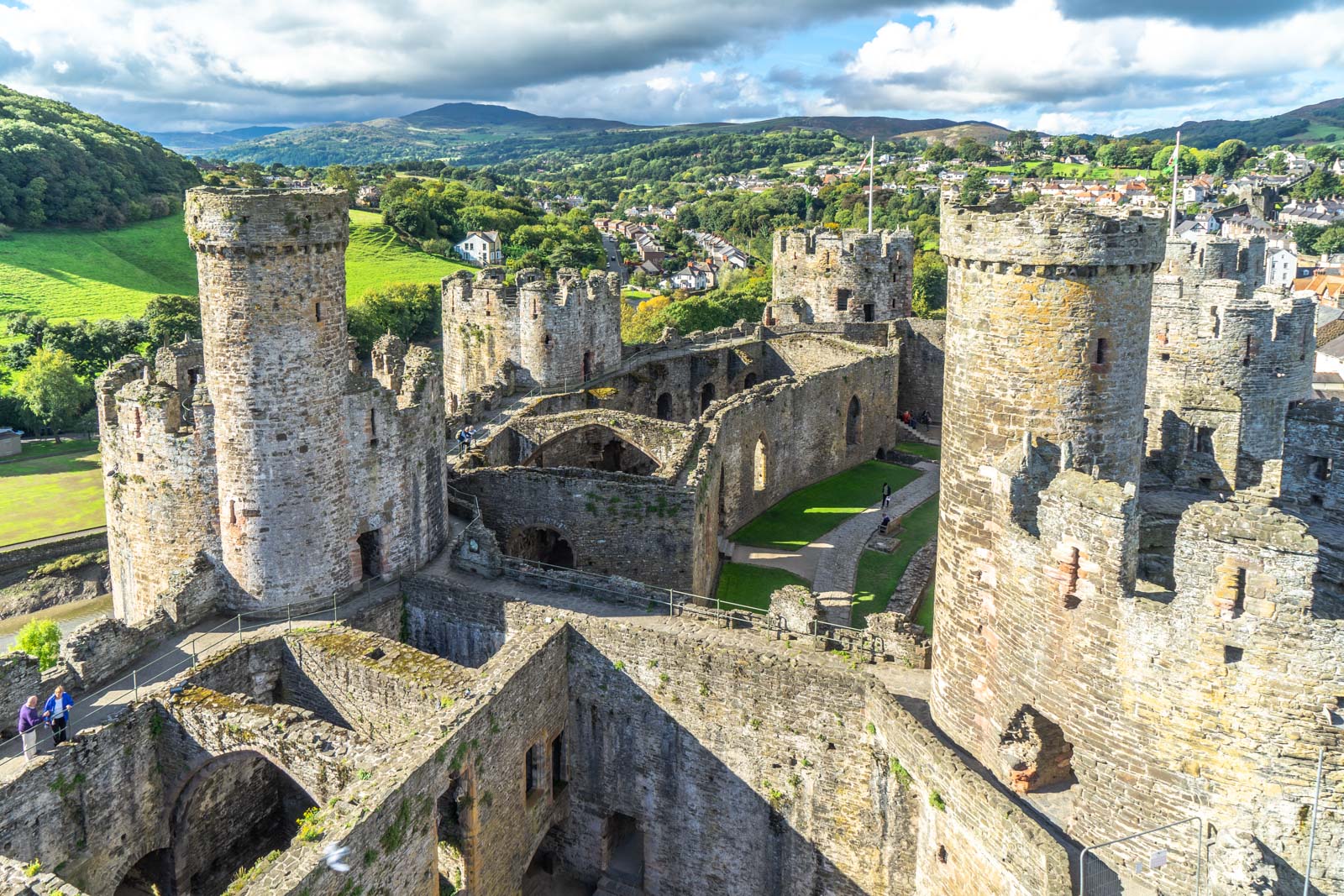 For the next couple of centuries, the Conwy Castle mainly attracted only the attention of artists, who wanted to paint the dramatic ruins. But it was restored in the late 1800s and is now part of a UNESCO World Heritage Site.

The Castles of King Edward

Conwy Castle is one of four castles in Wales that make up a World Heritage Site that’s officially called “Castles and Town Walls of King Edward in Gwynedd”.

King Edward I was the King of England from 1272 to 1307 and he is actually considered to be quite an influential reformer.

Historians who think he left a positive legacy point to the way he reformed the law, set up an effective system for taxation, and gave legitimacy to parliament.

But those who criticise him often use the examples of his brutality towards the Welsh and the Scottish. And it was this brutal approach to the Welsh that led to the castles that we now admire. After successfully getting Wales under his control, King Edward needed to colonise the land and maintain his power. The main role of the castles was to provide military security in key locations.

These four castles that have been designated as the World Heritage Site are not just the best preserved, they are also among the most strategic. Each of them is located by the water so that, even in the event of an attack or siege by land, they can be restocked with supplies and soldiers from the water.

Caernarfon Castle is an impressive structure from a military standpoint. It’s a large hulking fortification with unusual polygonal towers and has a unique appearance. It’s also great for photography because it is surrounded by water on two sides, although it gets dry during low tide. 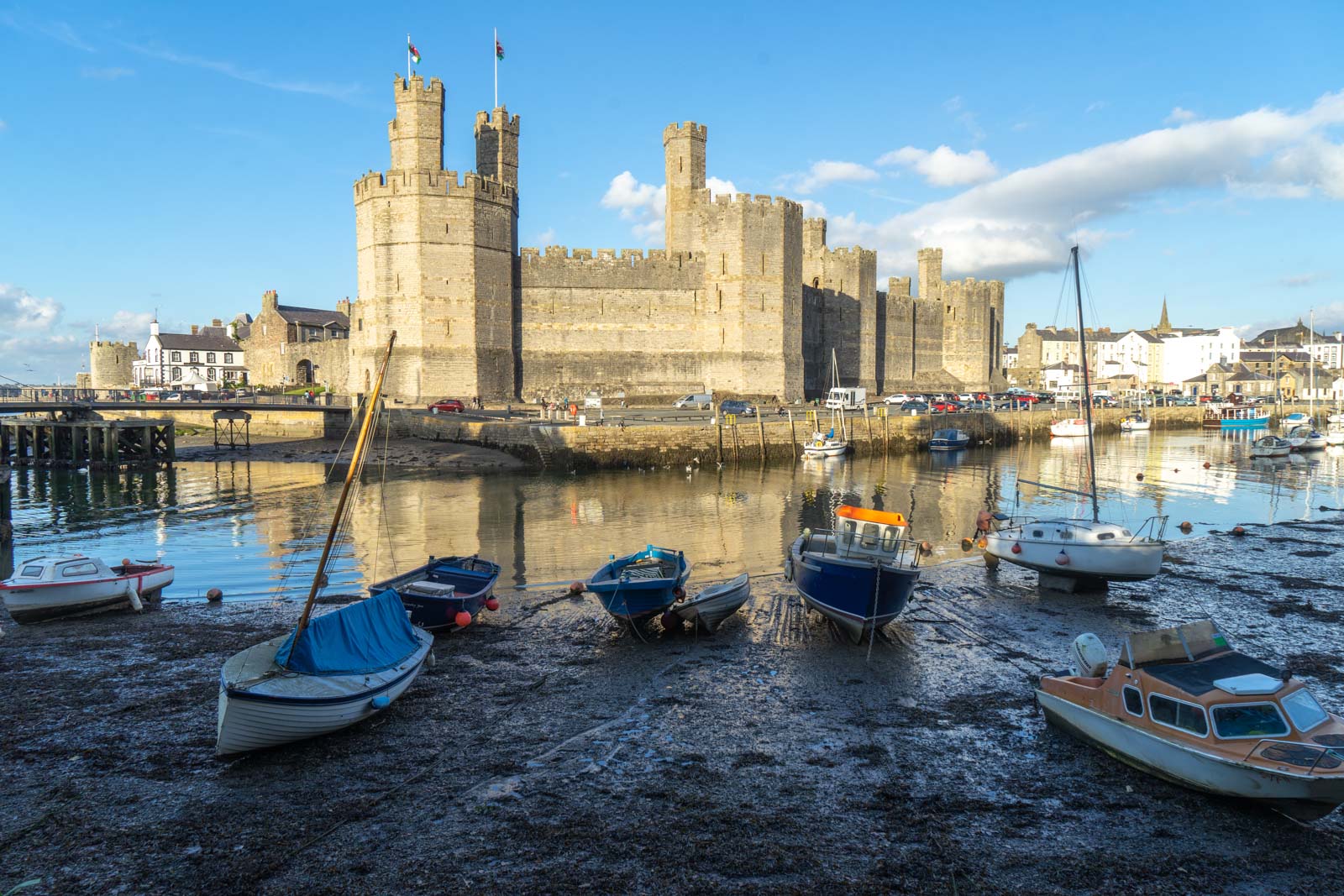 Caernarfon Castle has had important roles in British history. It’s where King Edward I’s son was born in 1284, becoming the first English Prince of Wales. And it’s where the investiture of Prince Charles as the current Prince of Wales took place in 1969.

When comparing the four castles, there is no dispute that Beaumaris Castle is the one that is the most visually-pleasing. It has classic proportions and perfect symmetry, making it the best technical example of these medieval complexes. 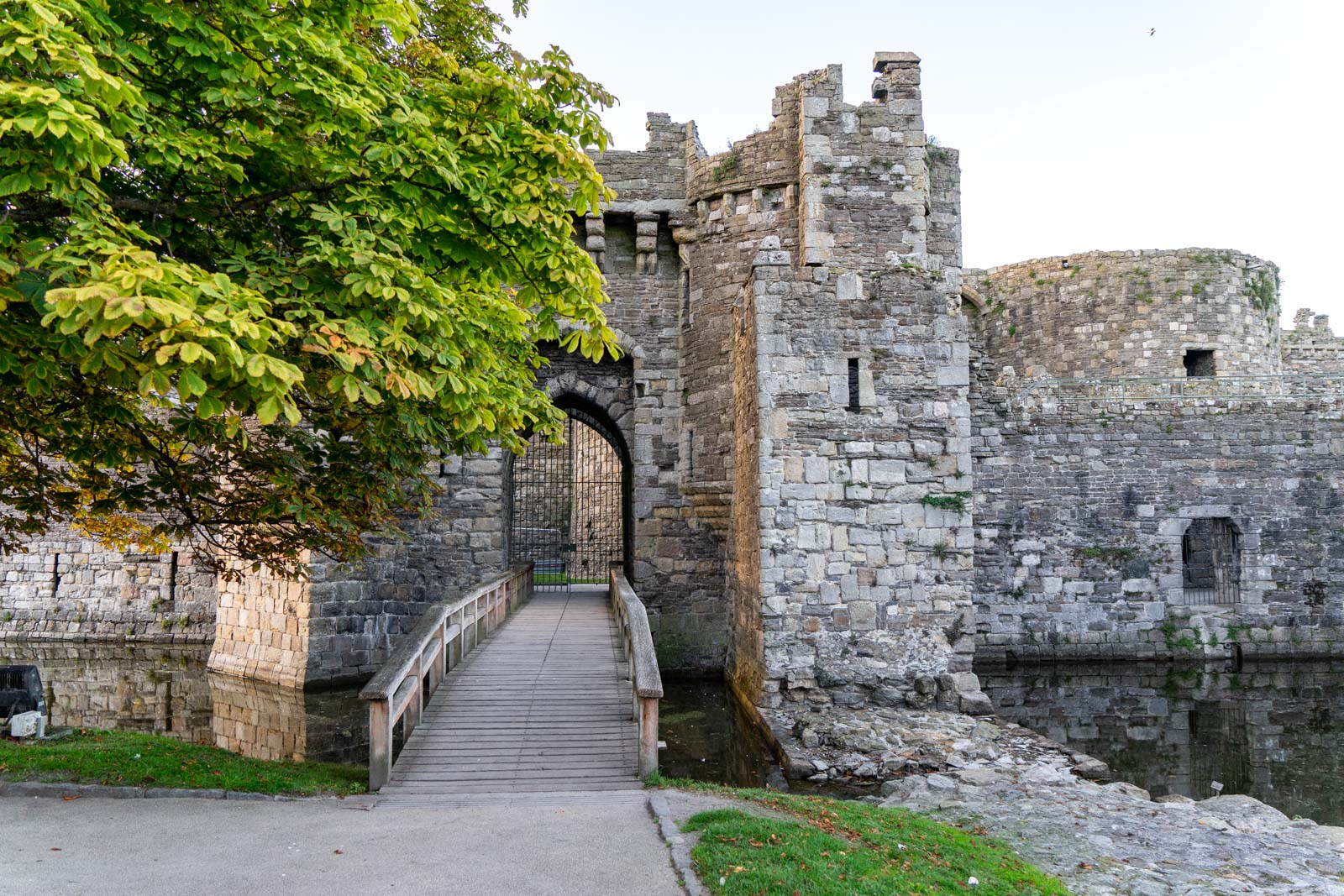 Even from the outside, you can see the Beaumaris Castle has an ingenious ‘wall within a wall’ design that gives it extra protection. With its location on the coast of Anglesey, at the eastern end of the Menai Strait, it was also strategically important.

And, finally, there’s Harlech Castle. It was one of the cheapest of Edward’s castles and was built quite quickly between 1283 and 1295 – but it’s still one of the most impressive!

It has two rings of walls and towers, with an immensely strong east gatehouse. It was impregnable from almost every angle and has a 61 metre long stairway from the castle to the bottom of the cliff, which could be used to bring in supplies from the sea. (The reason it looks like the castle is inland now is because the sea has receded over the past 700 years.)

If you were to pay for admission to each of the castles, it would end up being quite expensive. I would recommend having a look at the ‘Explorer Pass’ details, which you can buy at any of the castles and will give you access to a lot of sites.

Time Travel Turtle was a guest of Visit Wales but the opinions, over-written descriptions and bad jokes are his own. 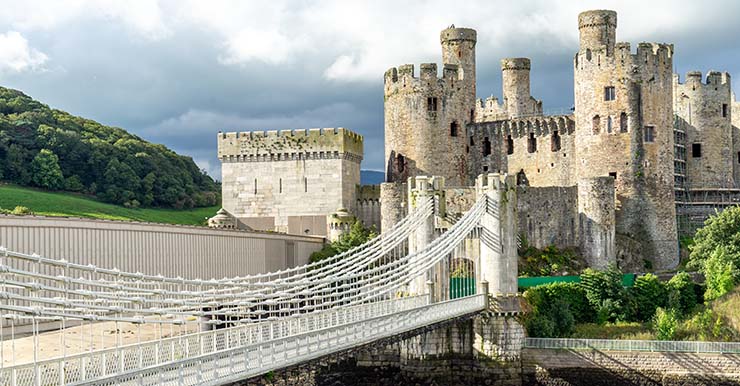 WANT TO KNOW MORE ABOUT WALES?

To help you plan your trip to Wales:

I am a ‘Wanderer’ with G Adventures and they have great tours in the UK.