A man, big smile on his face, cuts a bit off the end of the sausage and leans over his stall to hand it to me. He gestures encouragingly for me to grab it and taste it – so, of course, I do just that.

It’s tasty but I don’t quite recognise the flavour at first. The man can see the look of confusion on my face and, as it turns out, he speaks English. 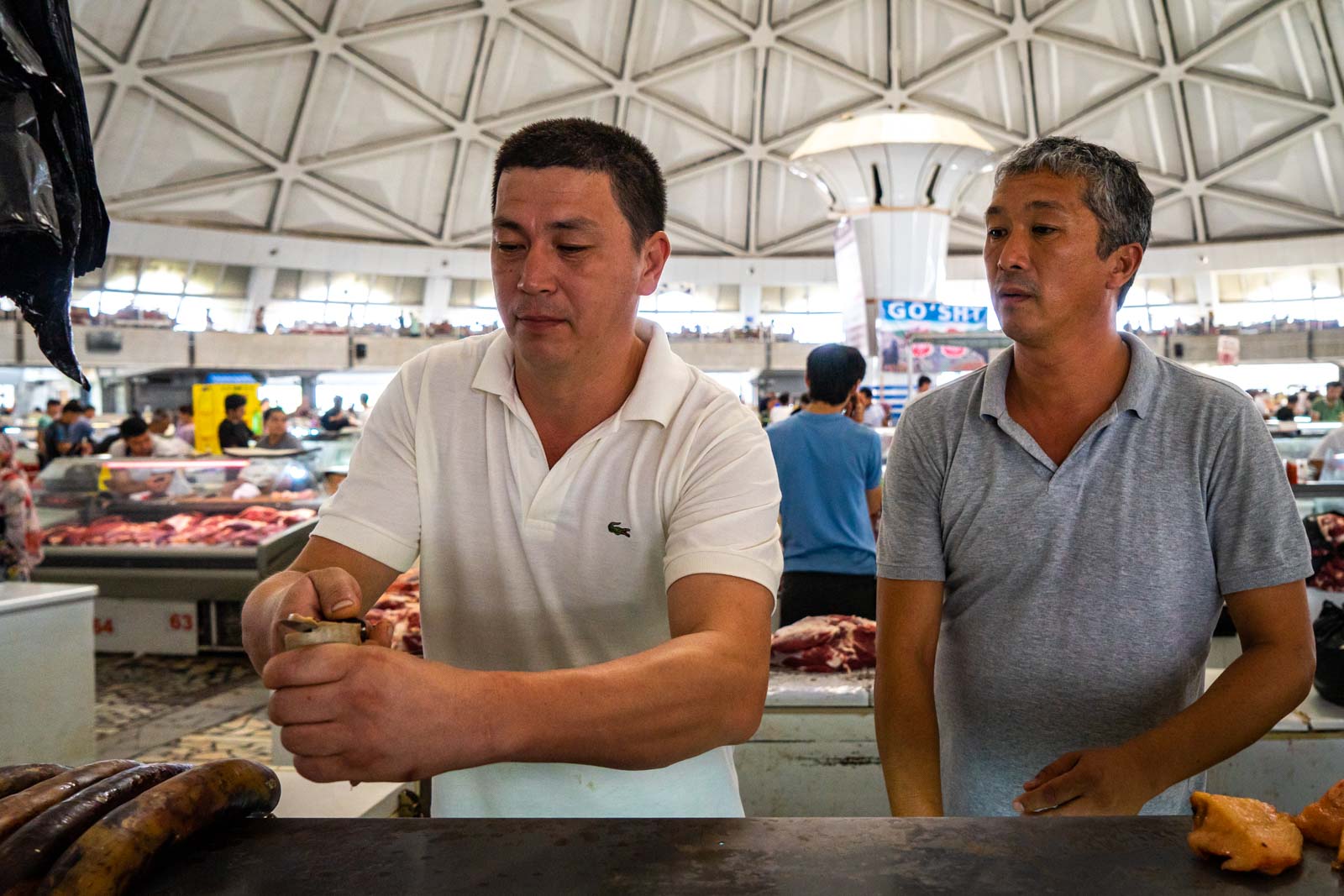 To be honest, it is quite good but I’m not tempted when he suggests I buy the whole sausage. It’s probably a bit too much – so I smile, thank him, and continue to wander. 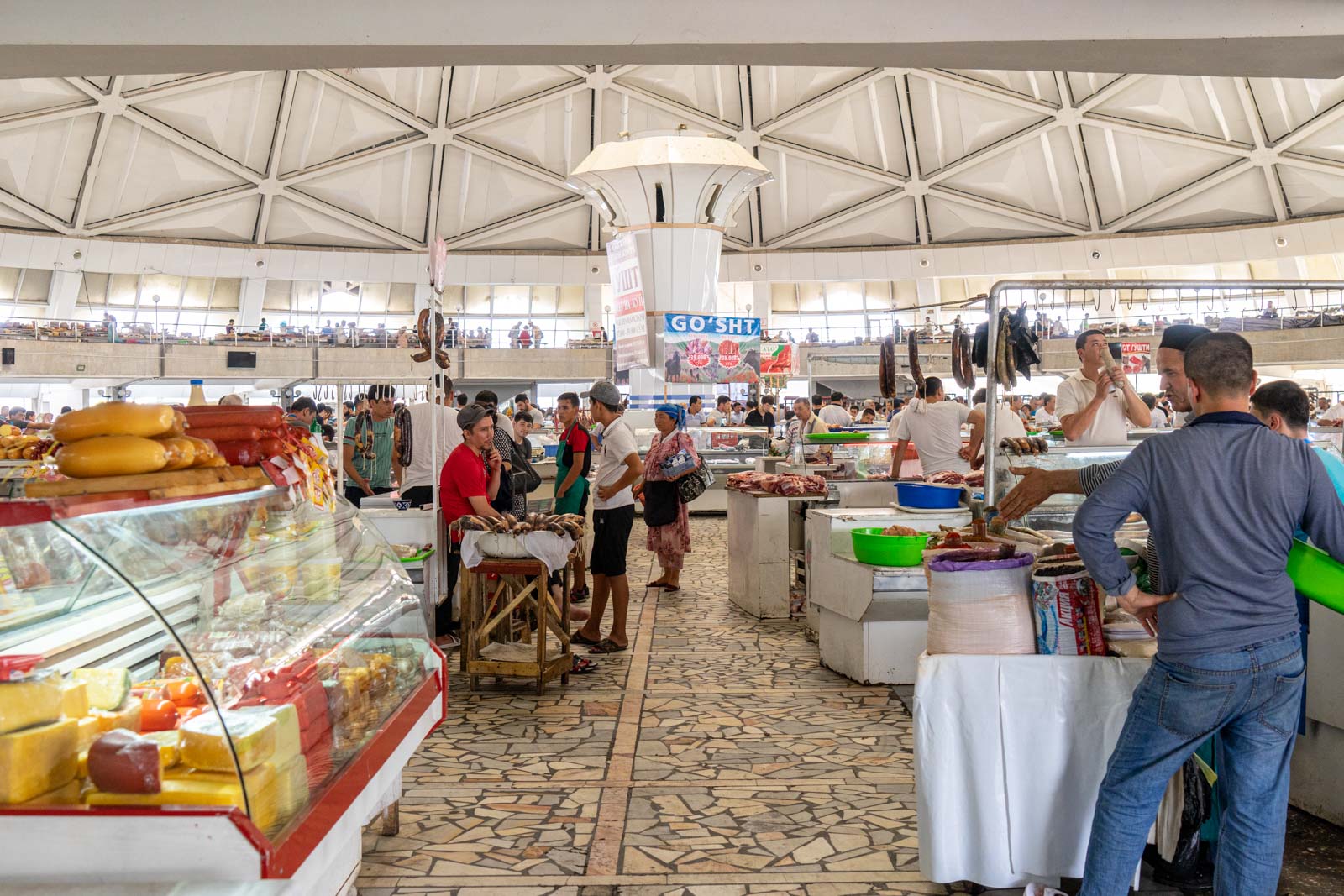 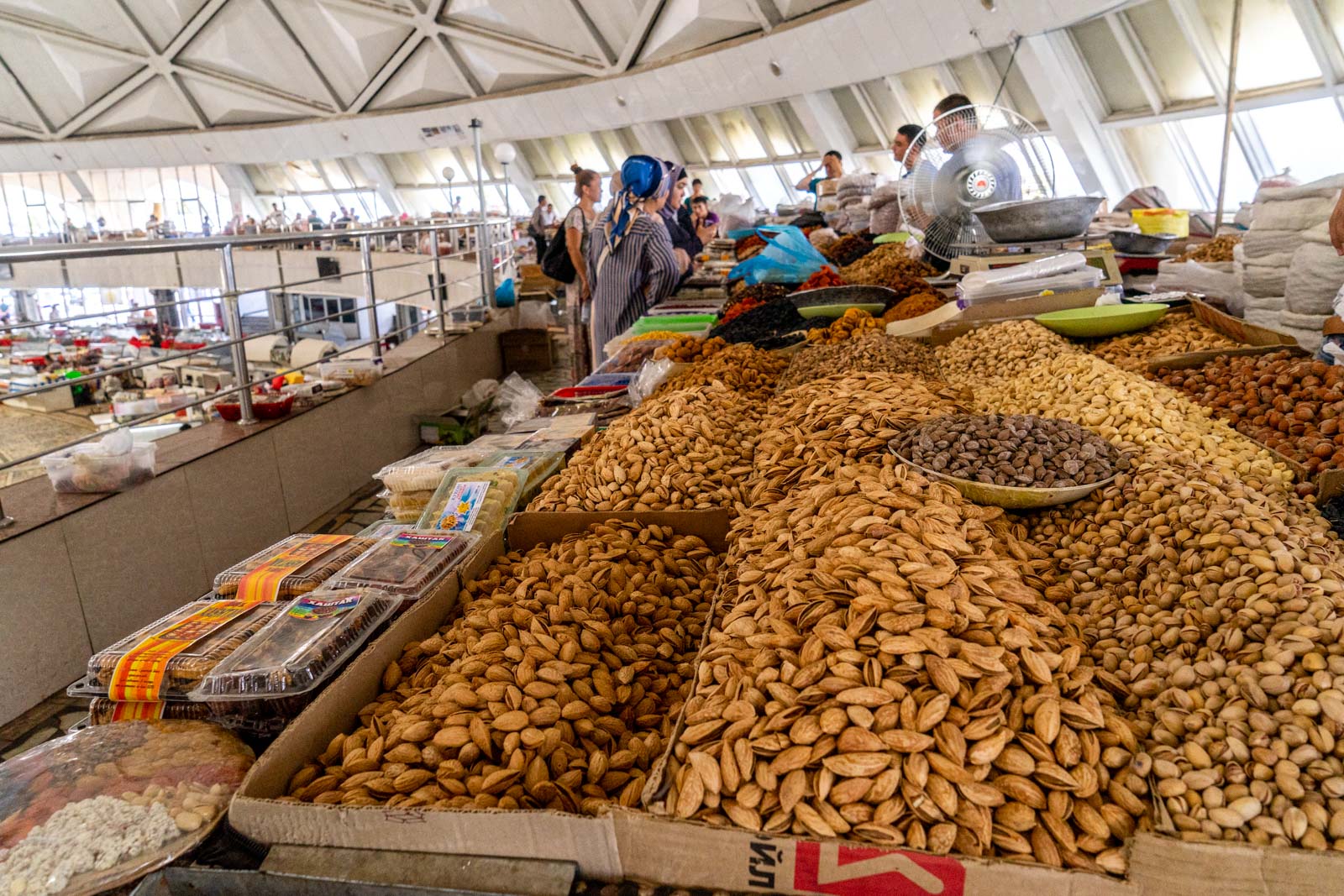 A lot of the shopkeepers still think a foreigner is a bit of a novelty and want to show some hospitality. I assume they also think we might be an easy sale, especially when it’s something peculiarly traditional like horse meat they’re trying to sell.

As I explore Chorsu Bazaar, this is one of the things that makes the experience more enjoyable. 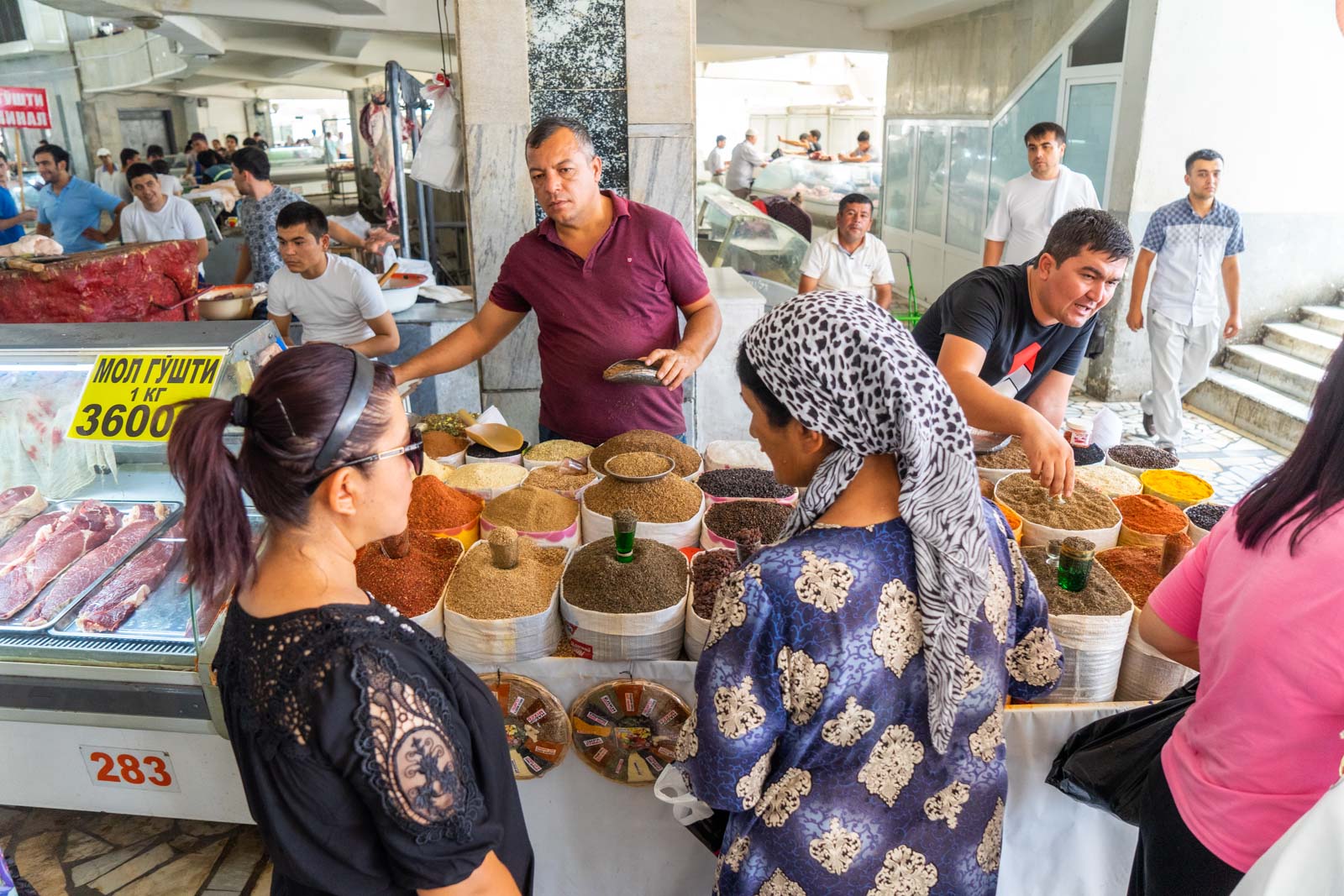 I always feel a bit strange in markets, walking around and taking photos with very little interest in buying anything, even though that’s the reason the place exists. But here, there seems to be an understanding – maybe even a bit of local pride – that tourists want to see this side of life. 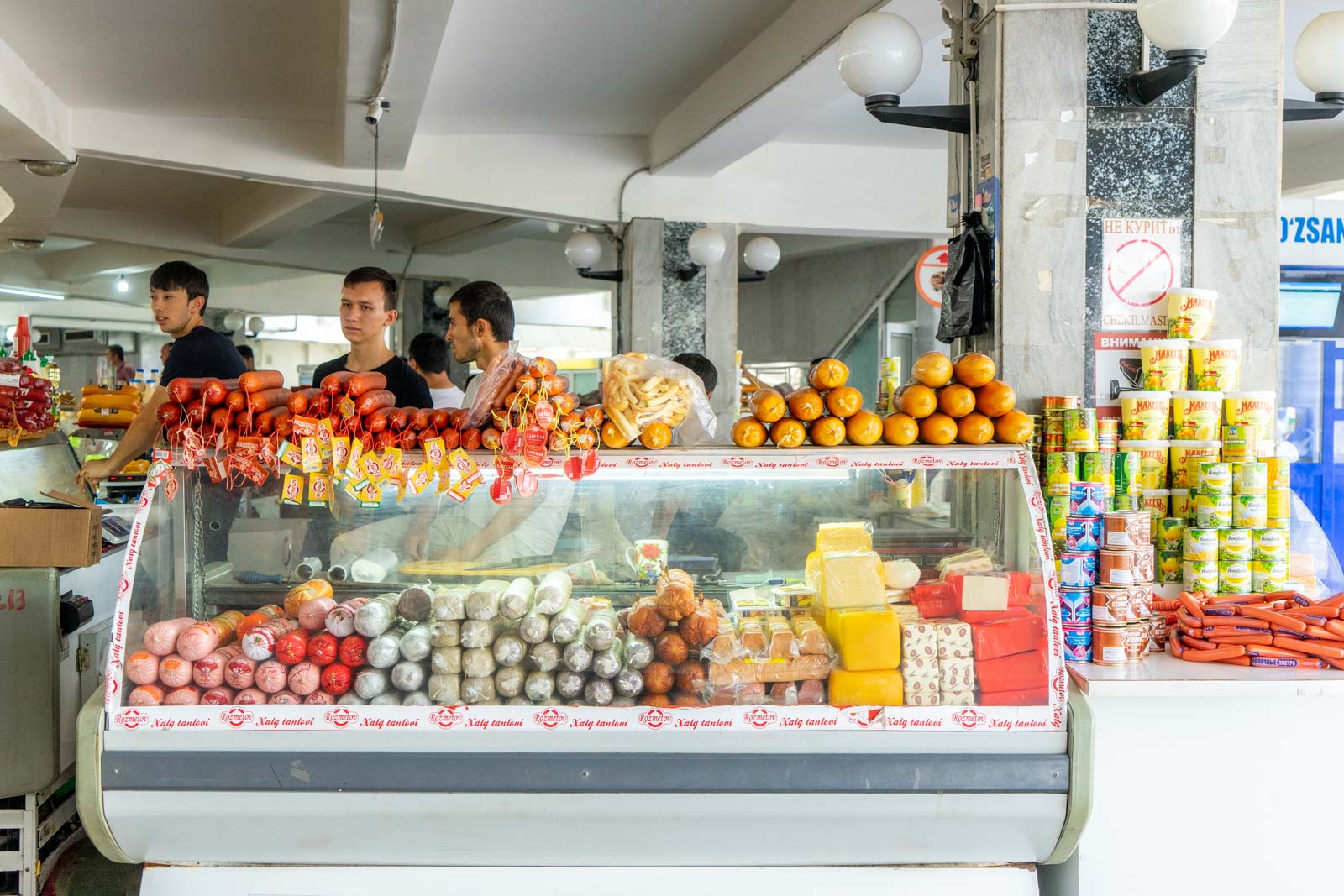 Chorsu Bazaar is, in a few different ways, a great way to see a local side of Tashkent – and Uzbekistan – more generally. 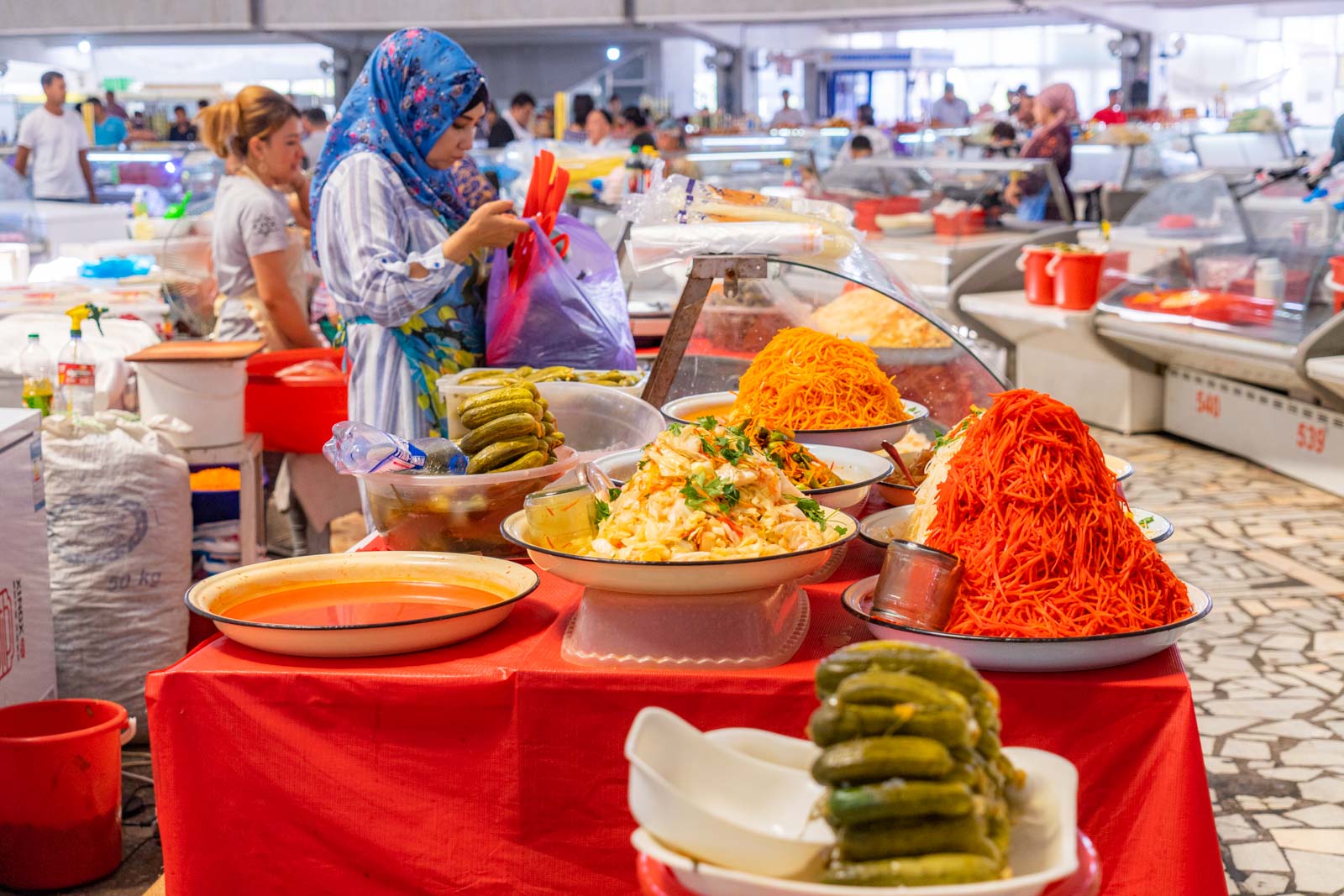 You see it in the things that are for sale. The enormous tables with the trays of dates, other dried fruit, nuts, and candy are emblematic of this part of Central Asia. Whenever you go to someone’s house or a formal gathering there will be plates on offer with these selections. 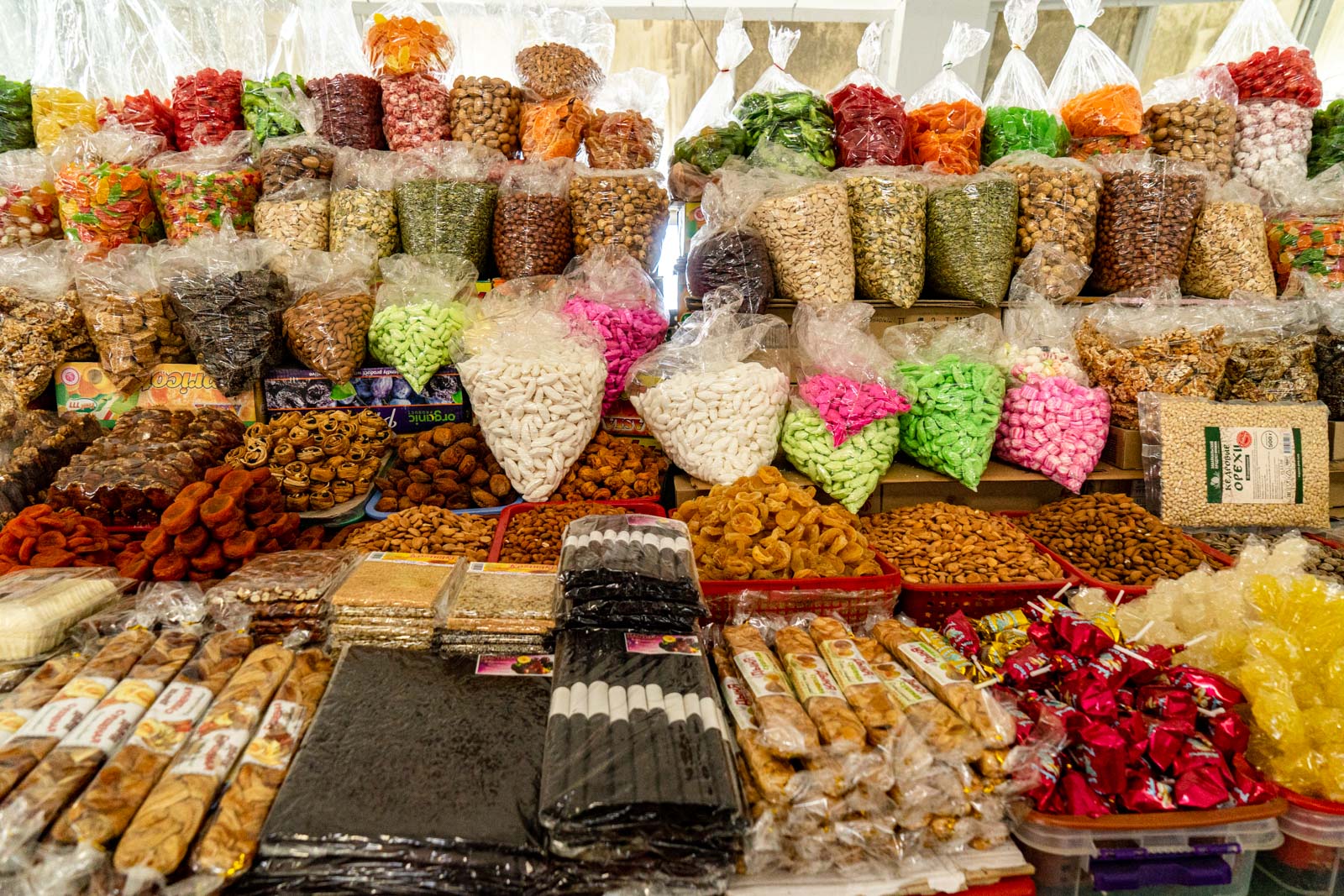 You see it in the people who have come here for their shopping, their fashion just noticeably different enough to my own. Men wearing taqiyahs, women with headscarves, bright folk dresses, farming coats, for instance. 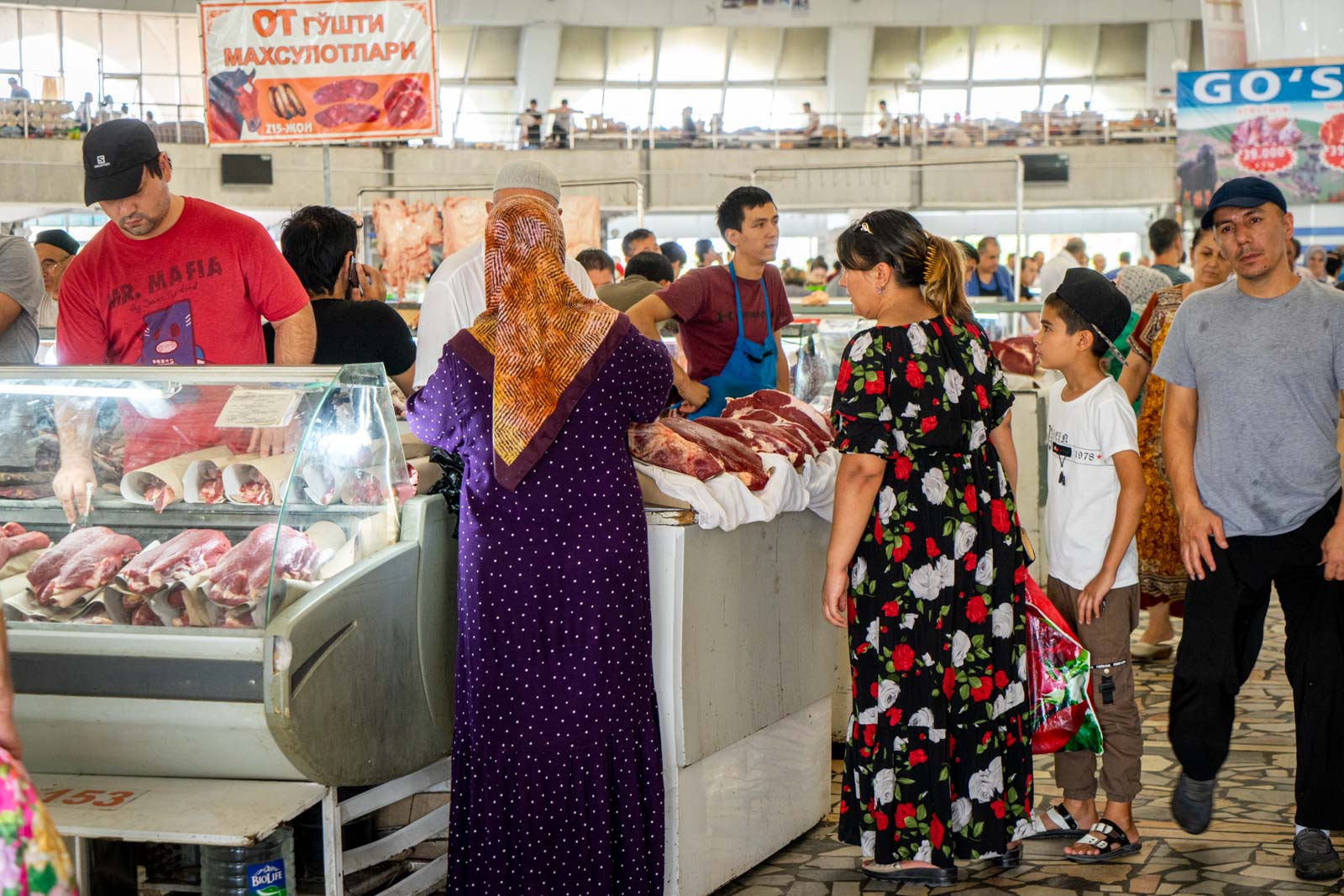 And you see it in the architecture. In the middle of Chorsu Bazaar is the central dome, the most recognisable symbol of the market. The outside, decorated with blue tiles, reflects the sunshine and the traditional style of Uzbekistan. 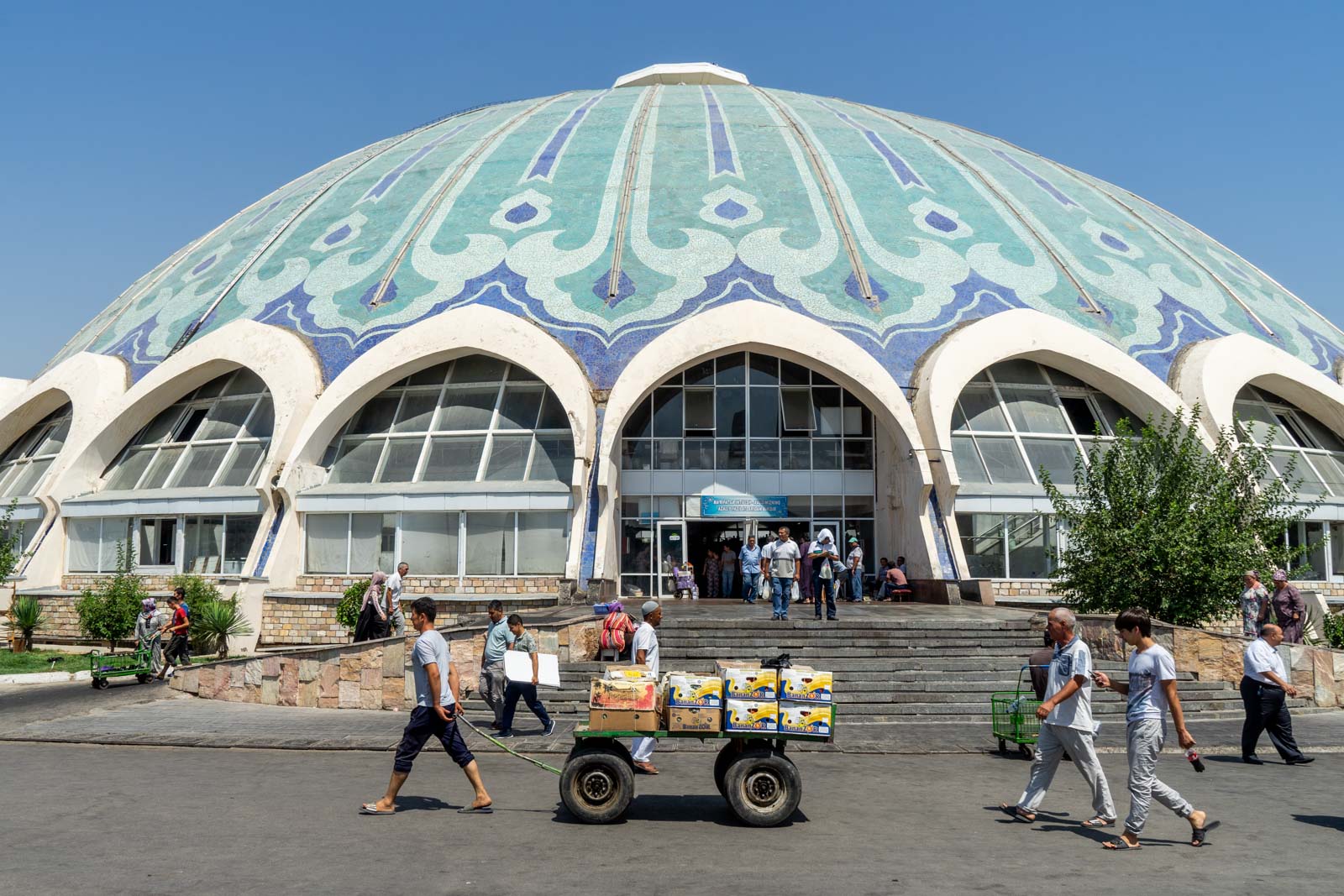 Inside, the stalls are arranged in concentric circles on the ground floor, with a terrace around the edge on the second level with more tables.

Most noticeable inside the dome is the ceiling that, with a webbed pattern leading towards a central skylight, creates an incredible visual effect. 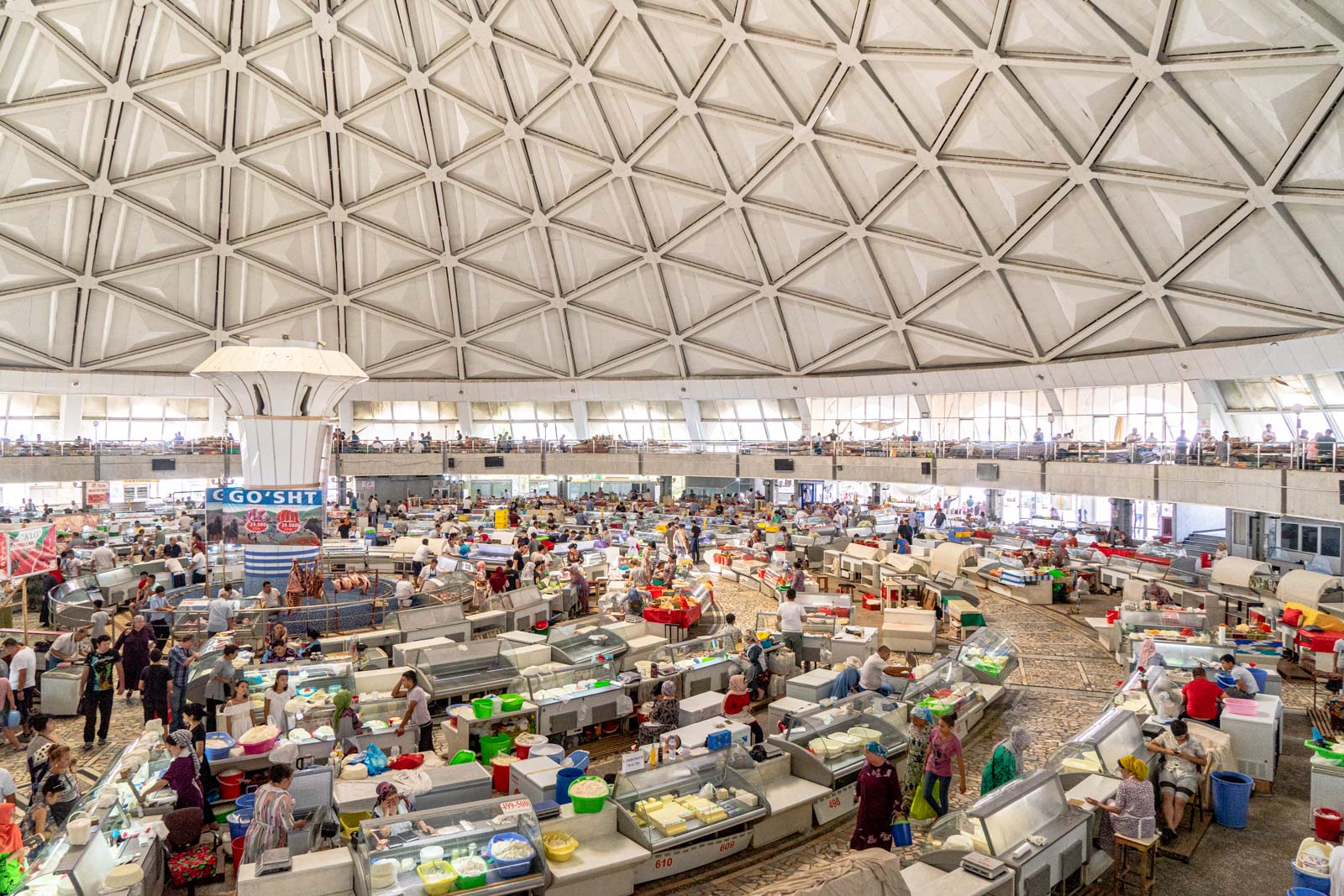 Although Chorsu Bazaar’s dome catches your attention first, the market actually spreads out from here in a few different directions. 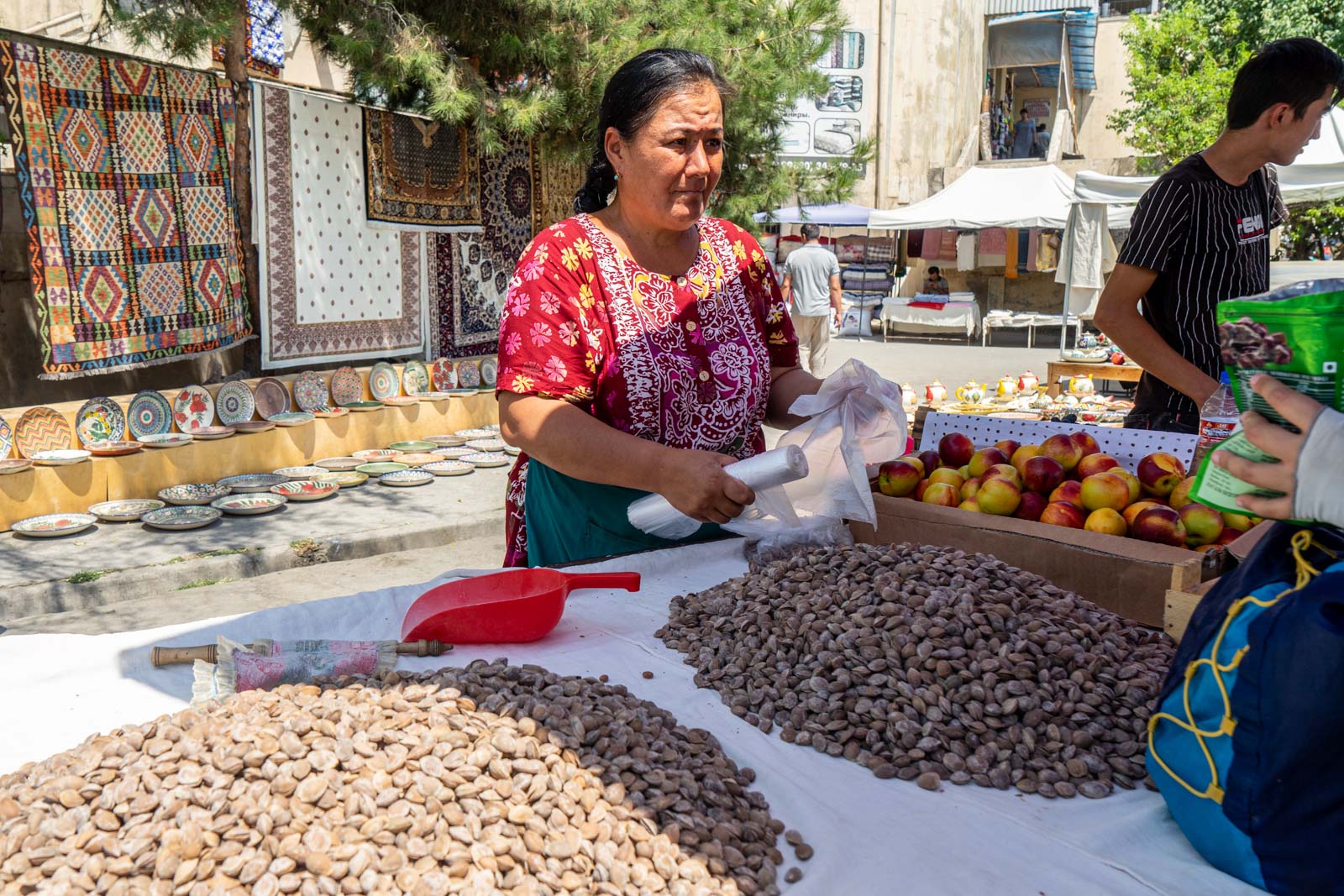 You’ll find some areas that are undercover, with benches full of fresh fruit that you can smell as you walk past.

There are alleys that are open to the elements, with plates or hats or anything else you might need. 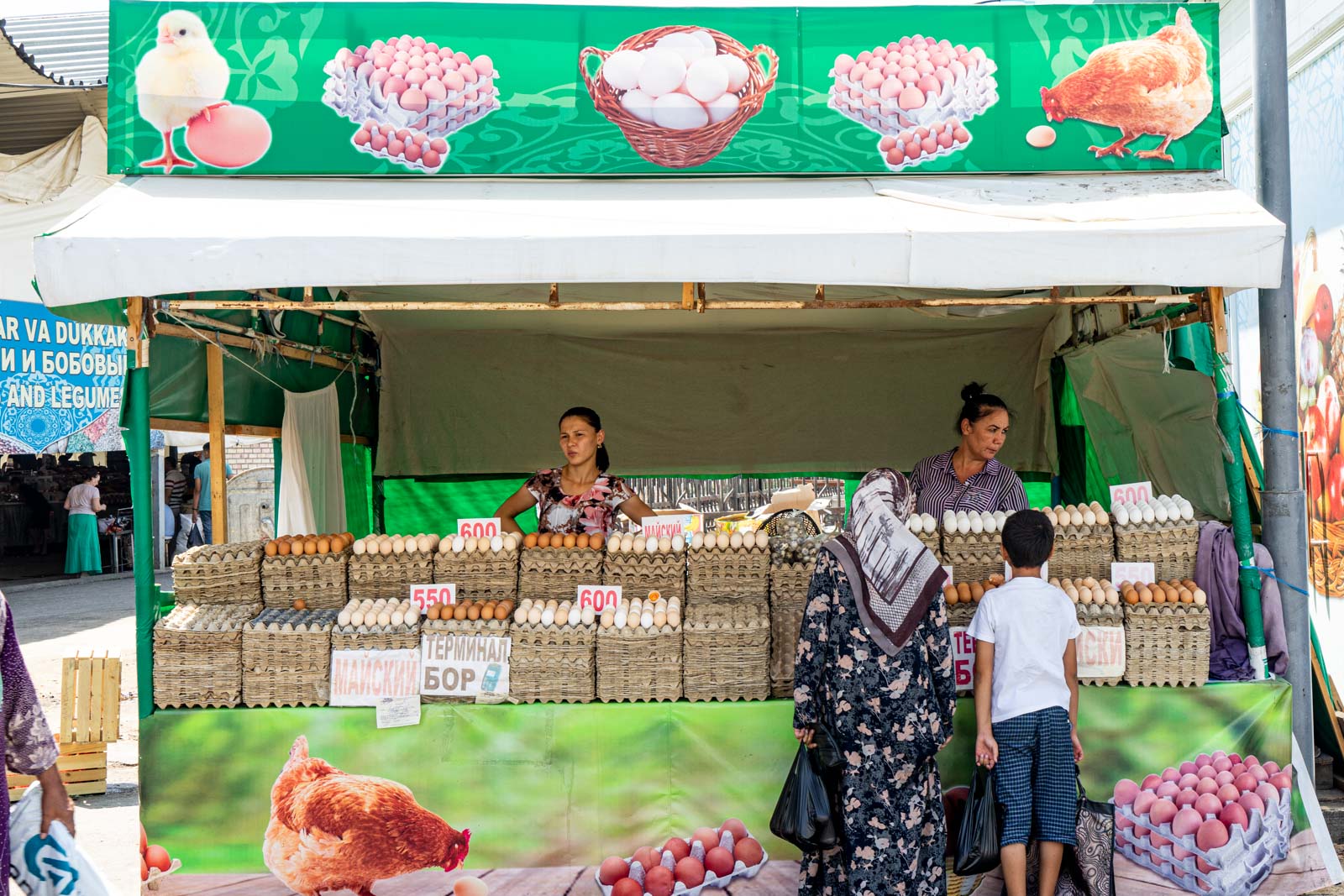 And then there are the makeshift stalls that seem to have just been plonked down in an open space, here you can buy produce that has probably come direct from a farm that morning. 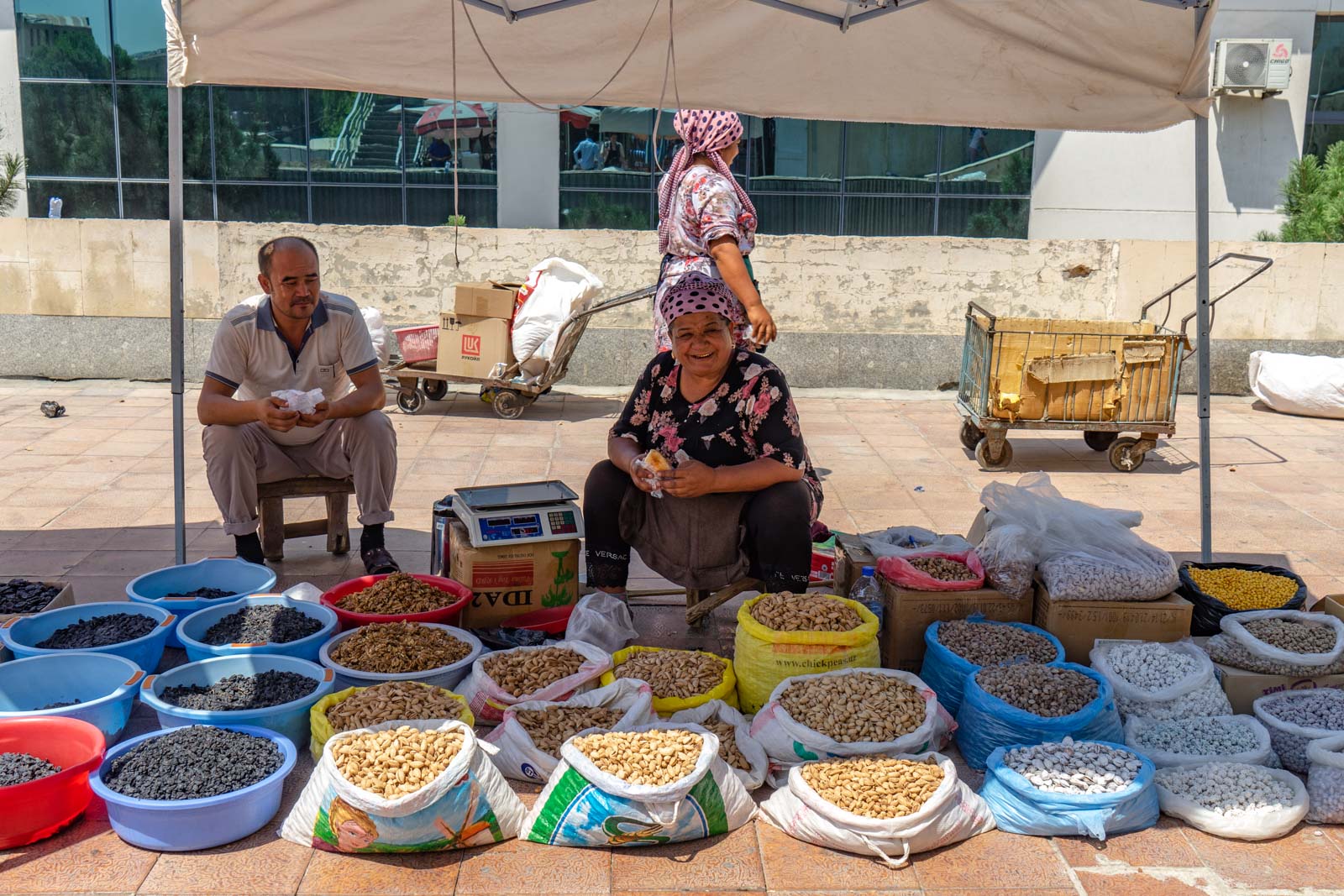 Walk around outside and you’ll see the plastic wares presumably made for cents in a Chinese factory, and Uzbek items that couldn’t have come from anywhere else but here. You’ll see traditional clothes woven with care, and cheap western-style shirts that you know won’t last a season. 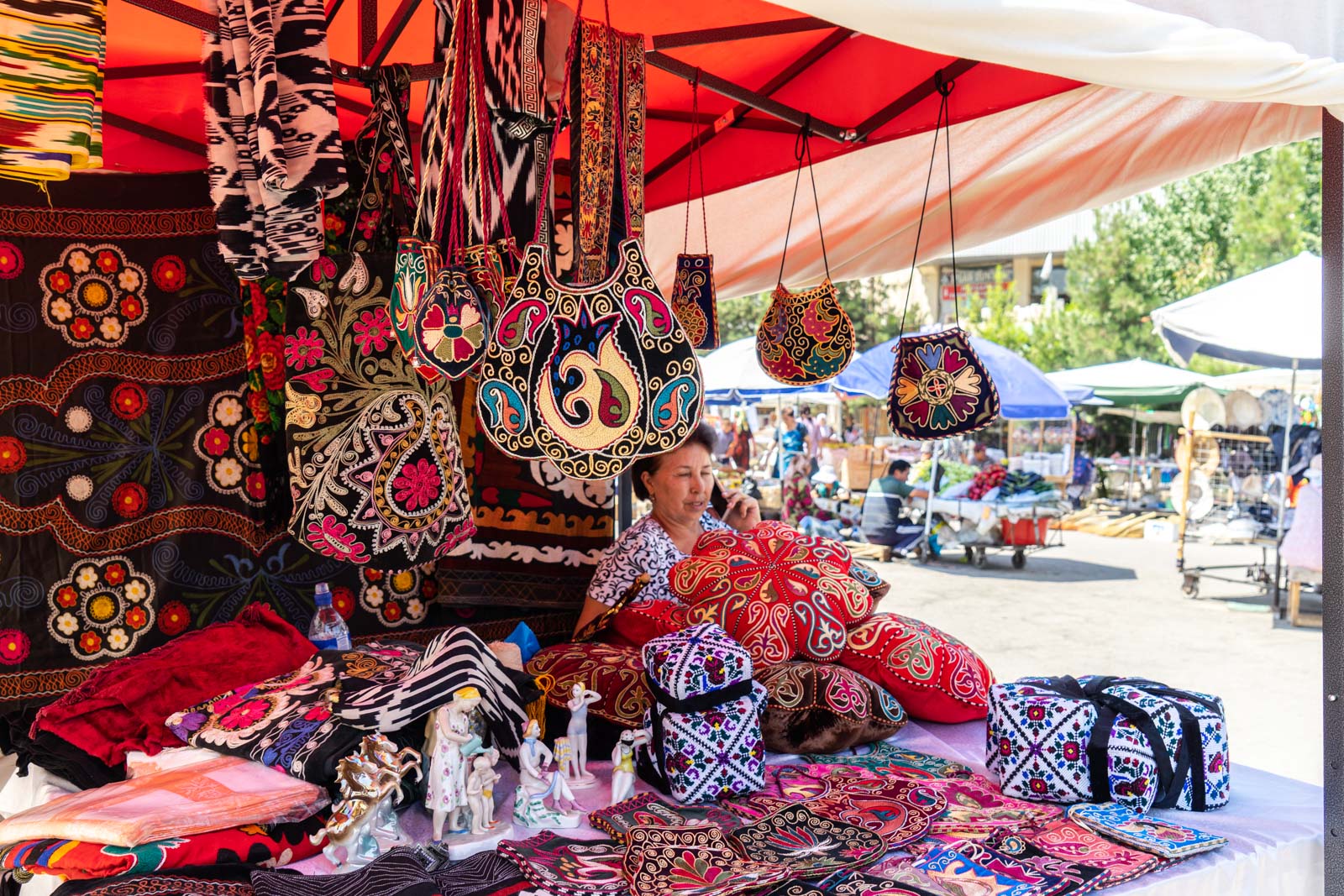 Tashkent may not have too much physical legacy of the Silk Road these days, with most of the old town around Chorsu Bazaar destroyed during the 1966 earthquake, and replaced by the Soviet ideal of a perfect city. 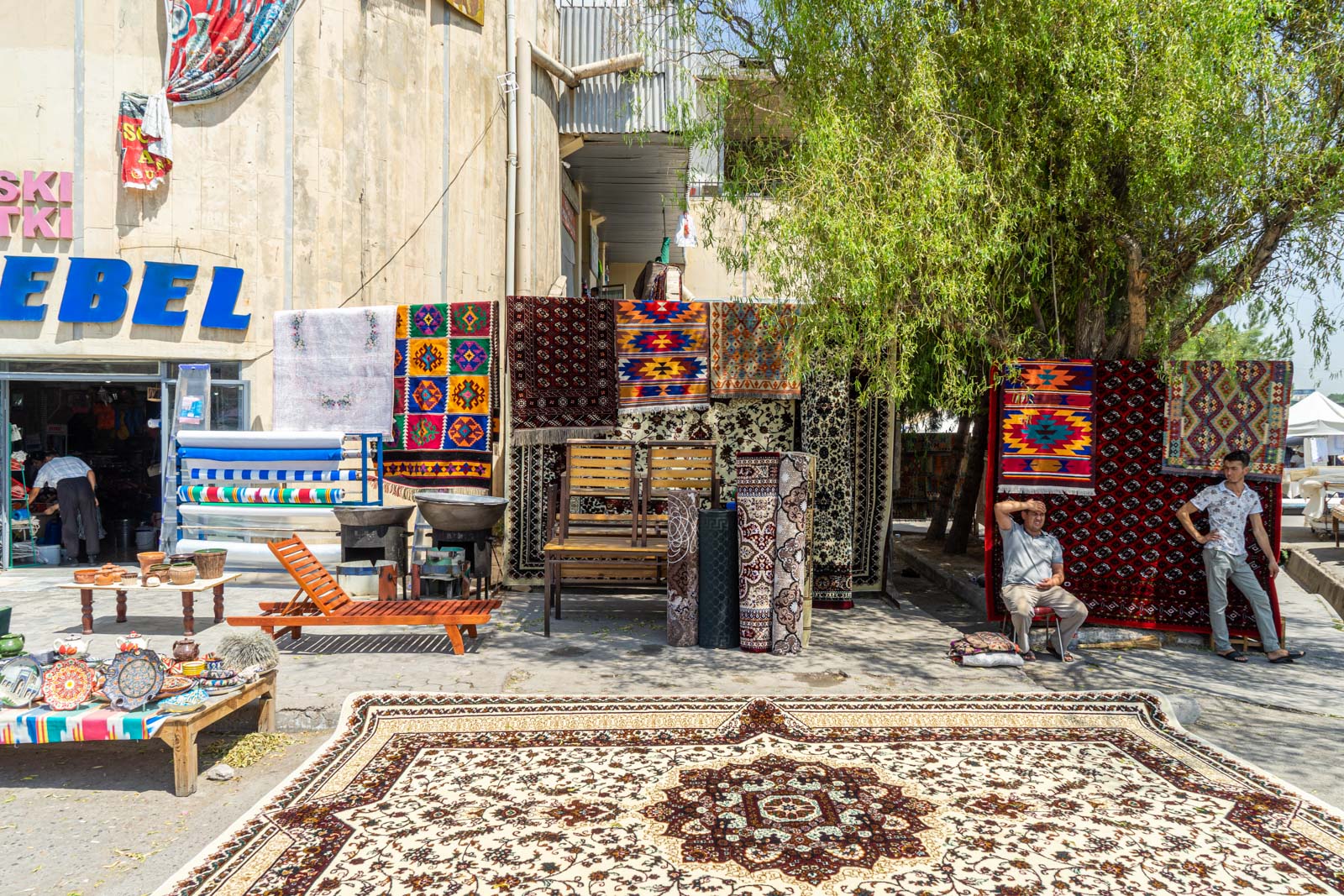 But when you come here you are reminded that this has been the land of traders for centuries. It’s no surprise to see this mix of traditional local wares with the imported stock from around Asia. That’s how it’s always been.

And this, ultimately, is why I love visiting bazaars in Central Asia so much. They are as modern as they need to be, they are as local as they should be, but the legacy of this region’s history is entwined within all of it.

This publication is made possible by the support of the American People through the United States Agency for International Development (USAID) Competitiveness, Trade, and Jobs Activity in Central Asia. The contents of this publication are the sole responsibility of Time Travel Turtle and do not necessarily reflect the views of USAID or the United States Government. 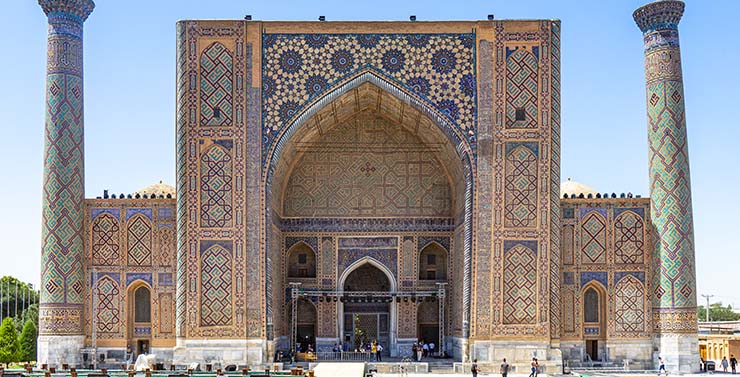 WANT TO KNOW MORE ABOUT UZBEKISTAN?

To help you plan your trip to Uzbekistan:

You may also want to consider taking a tour of Uzbekistan, rather than organising everything on your own. It’s also a nice way to have company if you are travelling solo.

I am a ‘Wanderer’ with G Adventures and they have great tours in Uzbekistan.