You know you’re going somewhere away from the crowds when your accommodation for the night sends you directions that say “go to the traffic light, and we’re in front of tabasqueña store”.

It doesn’t register with me until I get there. Go to THE traffic light. This is the kind of town where that won’t cause any confusion. There’s only one.

The town is called Xpujil and it’s in the east of Mexico, just north of the border with Guatemala. Getting here was just the first step in my journey towards Calakmul in the Campeche region, an ancient Mayan city hidden in the jungle. 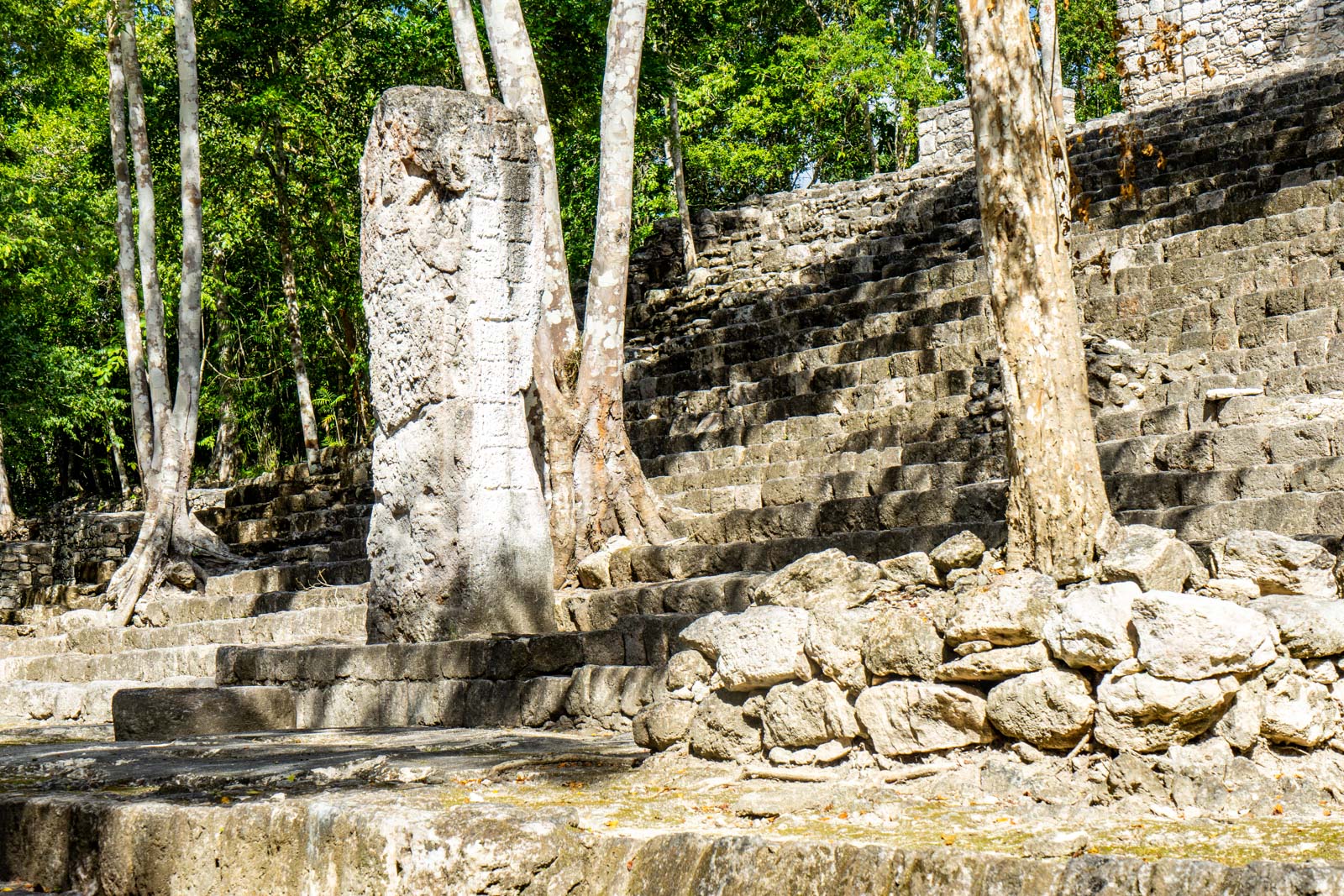 It’s not simple to get to Calakmul, which is why it’s not on the itineraries of most tourists, who prefer to go to sites like Chichen Itza, Uxmal, or Palenque. But, as I’m about to find out, it is certainly worth the effort!

The jade mask of Calakmul

In some ways, my journey to Calakmul started the previous day in the city of Campeche, when I visited the small archaeological museum there.

The historic city of Campeche is a fortified colonial town filled with heritage from the Spanish era. It’s not somewhere you would normally associate with the Mayan Empire.

>> Read my story about Campeche

But I thought I would pop into the museum anyway because I was walking past. Although it is well-presented, I didn’t think there was much here of note unless you have a particularly keen interest in the topic. That was, until I got to the final room. 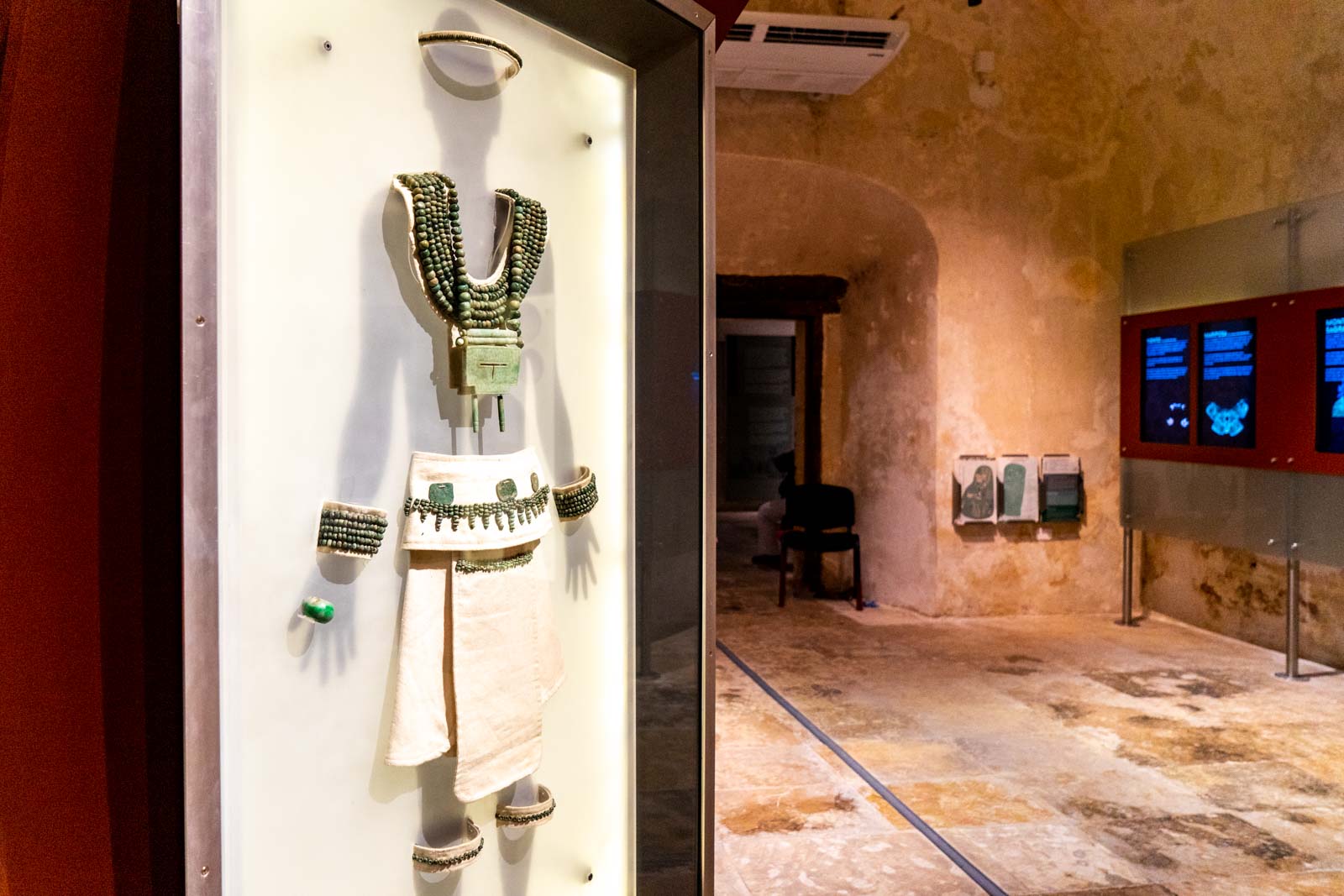 Here was a true treasure trove. And in the middle of it all, an extraordinary jade mask that would have been placed over the faces of a dead Mayan ruler.

This mask was found in a tomb at Calakmul and it is one of the most beautiful and significant artefacts of the entire Ancient Mayan world. It is so important that it has spent most of the time since it was discovered in 1984 touring the world at international exhibitions in London, Paris, New York, and so on.

And now it’s sitting here in a small museum in Campeche and I stand alone in the room admiring it. The mask certainly got me excited for Calakmul.

Xpujil may be the closest town, but it’s still a two hour drive from Xpujil to Calakmul. I arrange a lift through my hotel, sharing a car with a bunch of other travellers.

I had tried to organise some kind of tour in advance – either going to Calakmul from Campeche or meeting in Xpujil – but I couldn’t find anything that would take me because they had nobody else booked in. As it turns out, it’s better just to arrive in Xpujil and you’ll be offered multiple options to choose from. The locals know why you’re here and they’re all happy to help (for a pretty reasonable price too).

After we turn off the main road, it’s still about an hour’s drive. The jungle of the Calakmul Biosphere Reserve surrounds us. We stop a few times to look at birds and other animals along the way.

The forests here are just as important as the ruins (for different reasons) and they are also protected by UNESCO, making Calakmul one of the few World Heritage Sites that is listed as both cultural and natural.

When we arrive, there are no other tourists here. There are seven of us who have been in the car. As far as we can tell, we are the only one here. As we explore and start to split up, it feels even more empty.

It’s tempting to describe the Calakmul ruins as a ‘lost city’ and I certainly do at times. But that’s more for dramatic effect. Of course it hasn’t been lost… it just hasn’t been found by the average tourist. 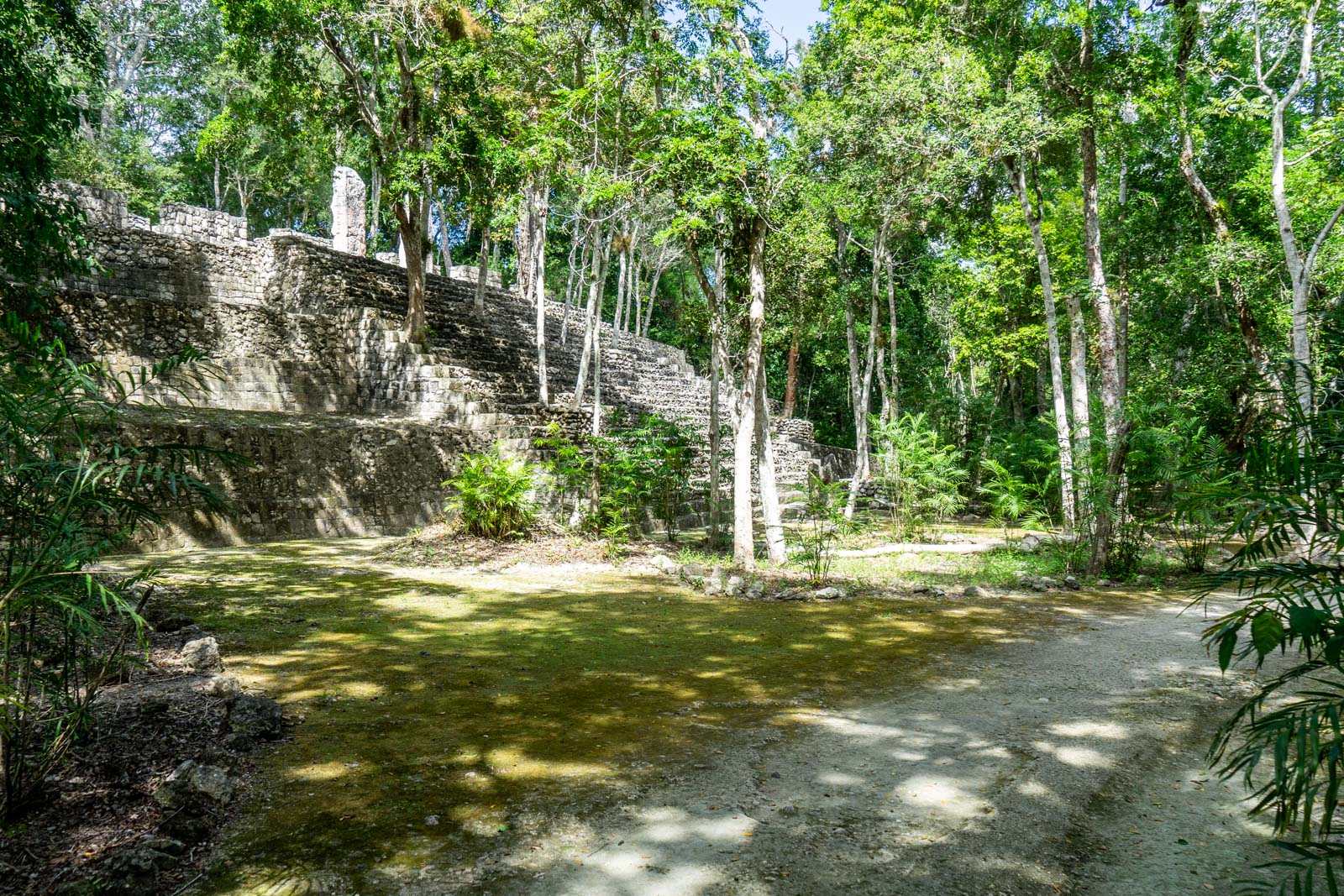 But go back 2000 years and it was far from empty here at Calakmul. This was one of the greatest Mayan cities that ever existed. Probably not quite as large as Tikal, which I have previously written about, but similar in size and status, with about 50,000 residents at its peak.

>> Read my story about Tikal

In fact, Calakmul and Tikal are quite close to each other. They are less than 100 kilometres apart, as the crow flies. But with Tikal in Guatemala and Calakmul in Mexico, and no road directly connecting the two, it would actually take a couple of days to drive between them. 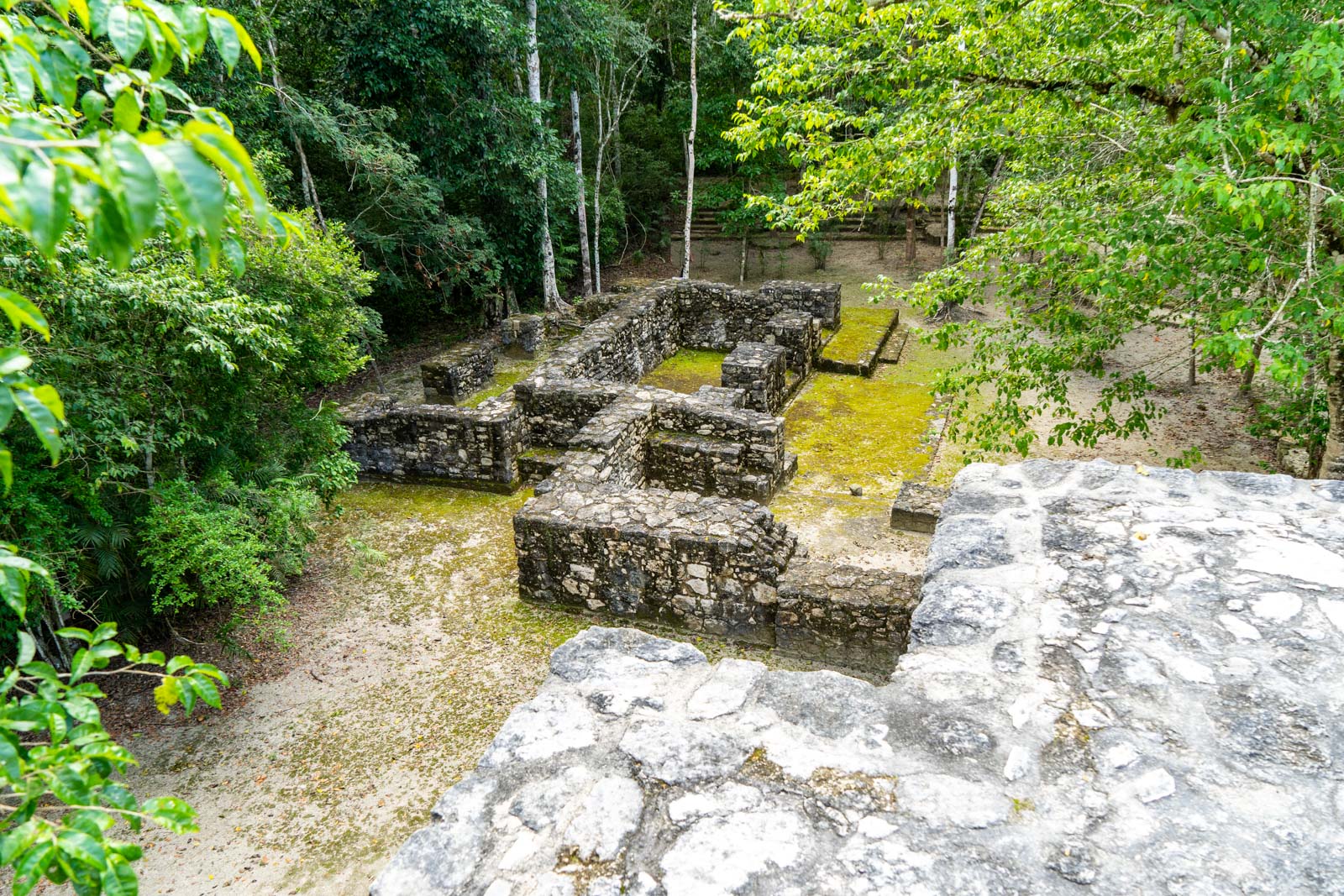 For the centuries that they both existed contemporaneously, though, these two great cities were connected by trade and conflict, their relationship oscillating between friend and foe, depending on the mood of the leaders.

You can see some of the similarities between Tikal and Calakmul at the most famous of the structures – the enormous temples that soar up to the sky.

Now they rise up through the jungle like ancient skyscrapers, beacons of a civilisation that was once so majestic. 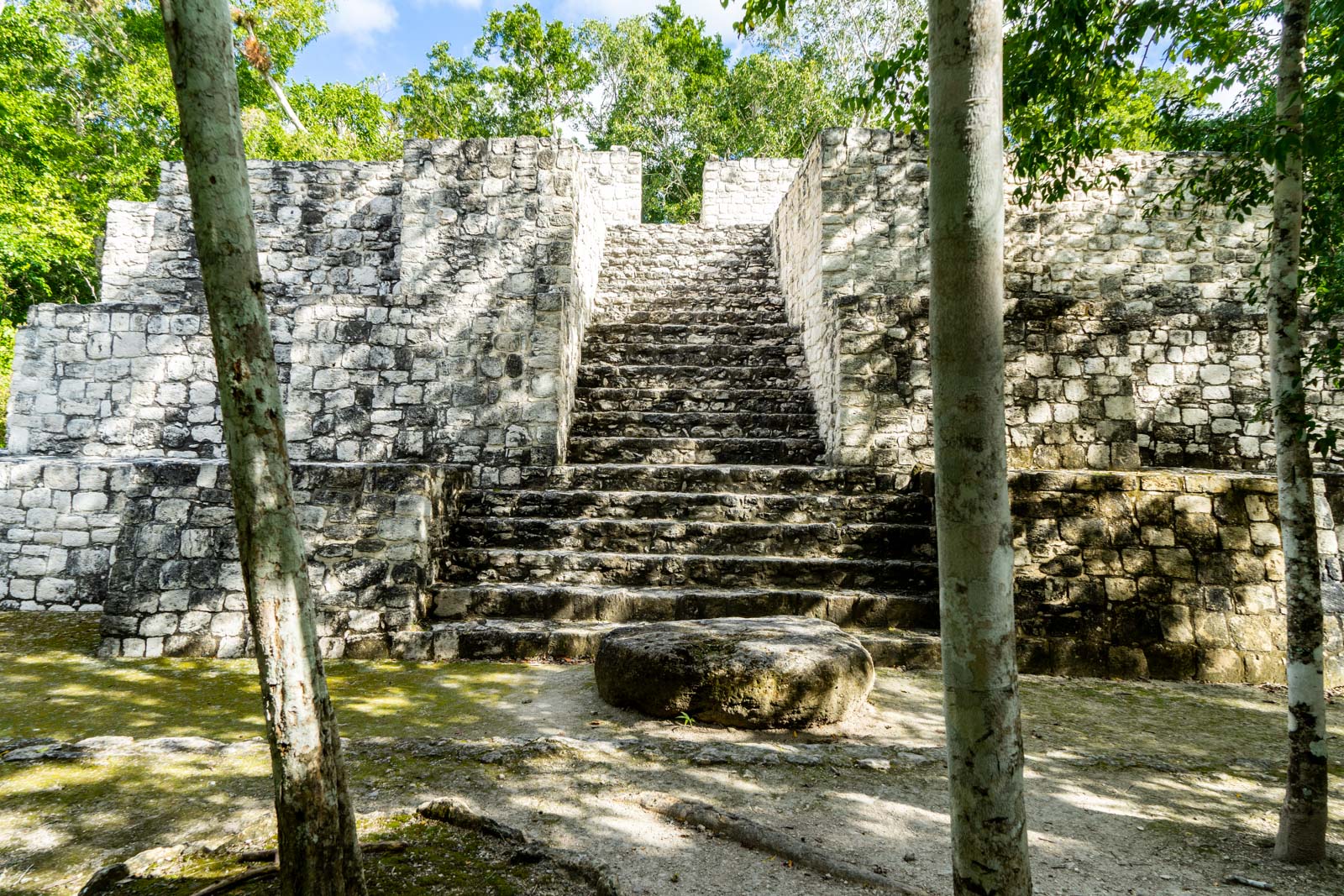 The most impressive of the temples is breathtaking! Rather dully named ‘Structure 2’, it is one of the tallest Mayan buildings in the world, standing at almost 50 metres high.

But it’s not just tall – it’s also wide. When you look at it face on from the ground, it seems to fill the space, enormous and hulking. What a sight it must have been for those who lived here. 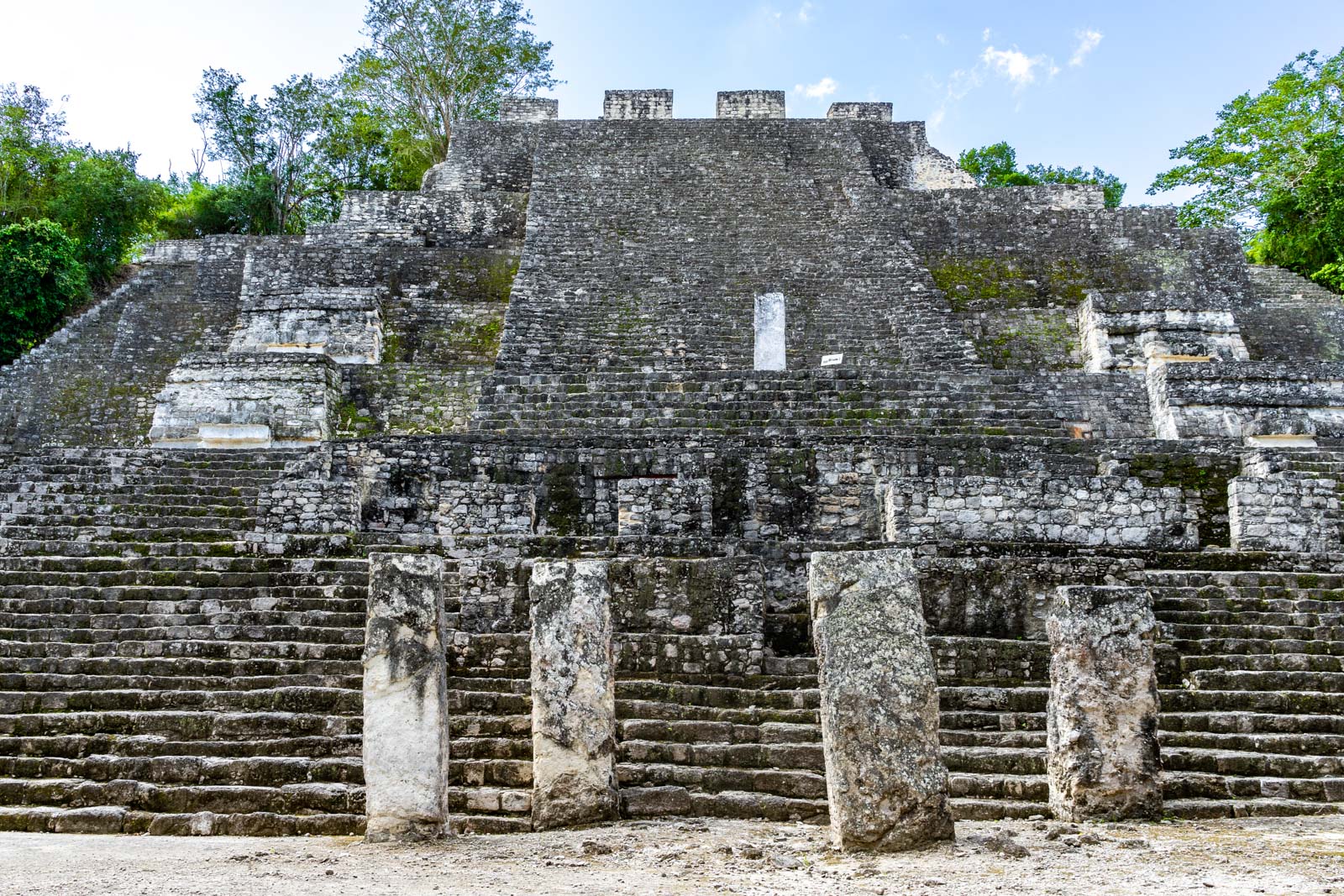 And what a sight it is still for me today. With nobody else here except for the two other travellers I’m with, there’s a sense of wonder and discovery that comes with arriving at this point.

The other temple that dominates the Calakmul ruins is called ‘Structure 1’. Technically it is a few metres shorter than Structure 2 but because it sits on top of an elevated platform, the summit is slightly higher. 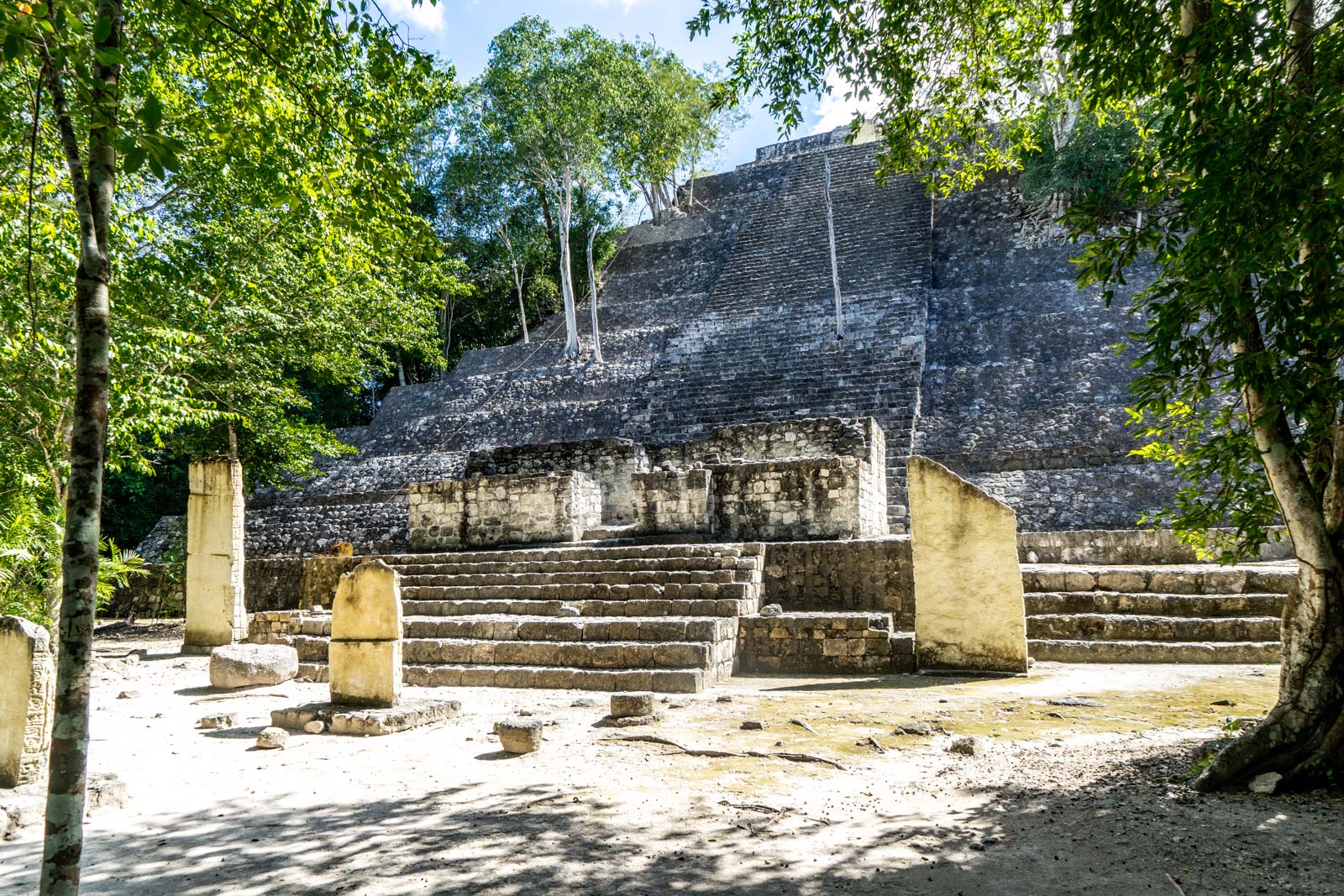 I climb up to the top to see the view. Up here, far far above the tree line, I feel like I am at the top of the world.

The Ancient Maya must have felt this way literally. This would have been the highest that the people of Calakmul would ever get in their lives and, as far as they knew, the world did not go too much further than they could see.

Back down on the ground, the sound of howler monkeys rings out. There are a lot of them in the jungle here and quote often one will start making noise nearby and startle me.

At one point I’m standing on one of the main plazas and the sound of the howls is so loud. There is just me and two other people here – three of us in an enormous plaza that would seem empty except that the howls of the monkey fill it completely.

As we explore the different sections of Calakmul, it’s clear that the three hours the driver gave us until we needed to get back to the car will only just be enough. And, even then, it’s a bit rushed.

The enormous Structure 1 and Structure 2 are the most impressive buildings in isolation, but what is so incredible about Calakmul is how much else there is here. Large sections of the ancient city have been so well restored that you can get a real sense of the scale of this metropolis. 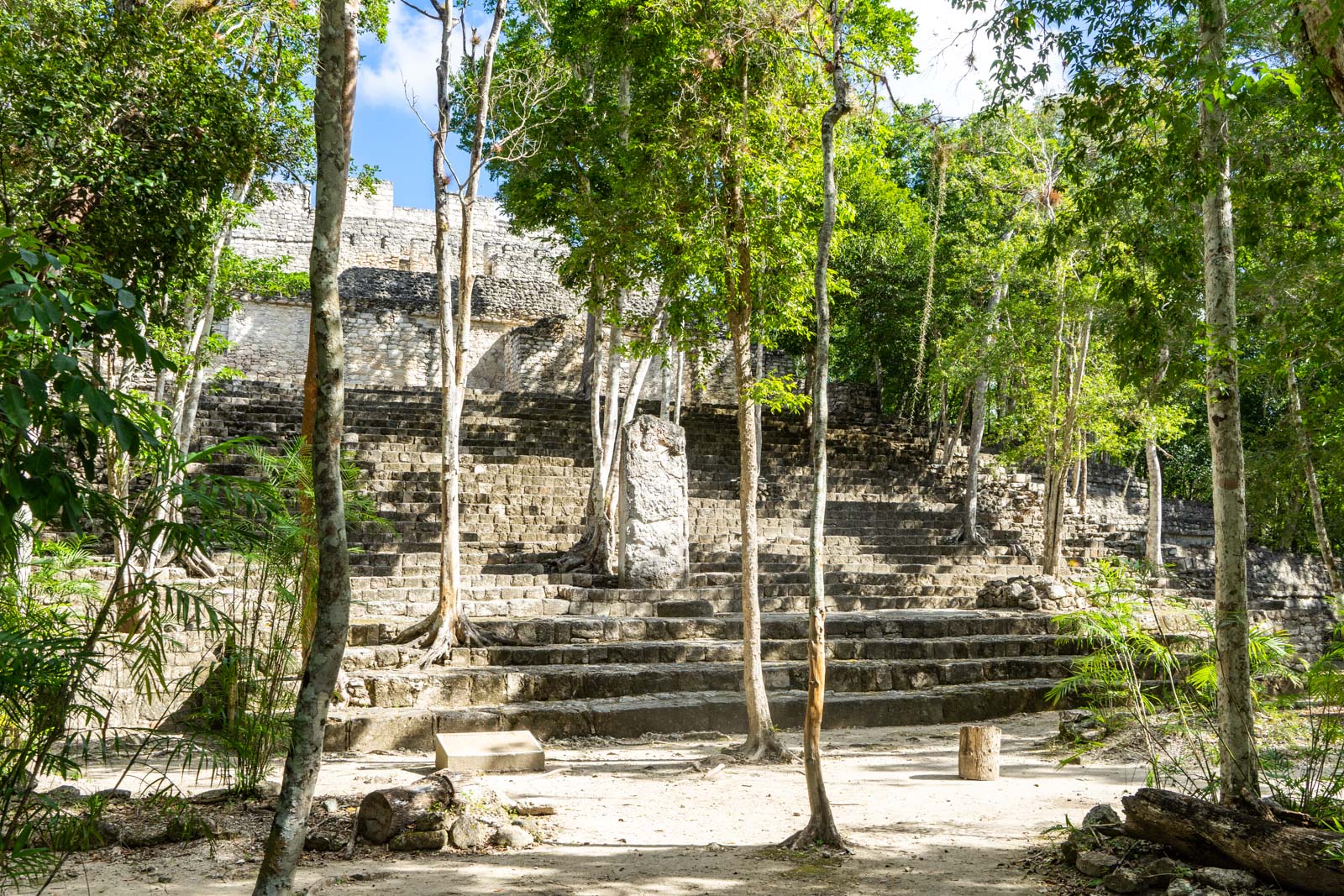 Aside from the Gran Plaza and its temples and pyramids, there’s also the Gran Acropolis, a wonderful collection of residential buildings with a central ball court and and other ceremonial areas.

As you go through it and come out the other end, you walk through roofless houses and see how the rooms fitted together and these Ancient Mayan families (presumably wealthy ones) lived. 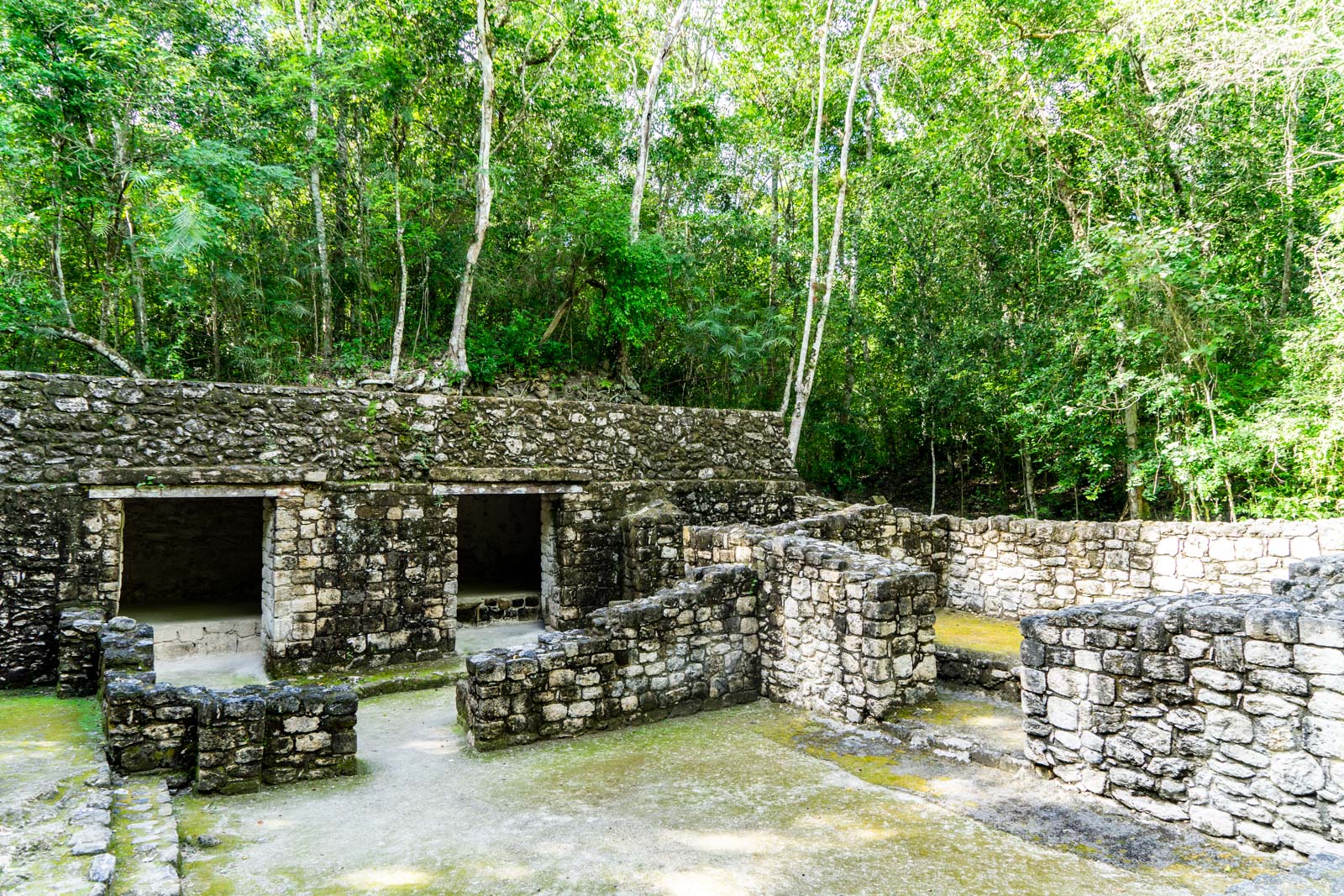 In a few of these old houses, the walls have been restored by archaeologists, but they have left the trees growing from the middle of a room, or in the spaces between walls that might once have been storage.

It’s fitting because from about 900 AD or so, the jungle became the main residents here at Calakmul when the city-state collapsed like so many others in the region, presumably because of climate change and the other natural reasons that forced the population north.

Certainly, archaeologists have done a lot of restoration work here and I am so impressed with the site – I think there is probably more to see here than some of the busier sites.

But there is also still so much jungle. Although, that’s one of the things I like about it. Not only can you easily imagine what Calakmul was like at its zenith, you can also get a sense of what it’s been like for the past millennium. It is so untouched by visitors, with just a handful coming every day. It does take time to get here and it’s normally a big detour for people who do a fairly standard trip through this part of Mexico, even if they’re then going into Belize or Guatemala.

That’s part of the adventure, though, isn’t it? It’s one of my favourite Mayan sites that I see on this trip. Not just because the site is so impressive from a historical point of view – although it obviously is. But because I know I am one of the small number of people who have seen it for myself in more than a thousand years.