Best things to do in southern Belize

Just beyond the tourist hotspots, there’s a beautiful and culturally-rich side of Belize to be discovered. Let me share with you some of the best things you can see here.

Belize is not your typical Central American country. Whatever you think you know about the region, it’s best to forget it before you arrive.

One of the most obvious differences, evident as soon as you arrive, is that Belize is an English-speaking country. As a former British colony (and still with the Queen as its head of state), it is the only country in Central America that doesn’t use Spanish as the official language.

It takes me a little longer to realise another difference – that culturally Belize is much more Caribbean than Latino.

It’s the only mainland country to have its entire coast on the Caribbean Sea and that’s reflected in the way of life as well as the geography. 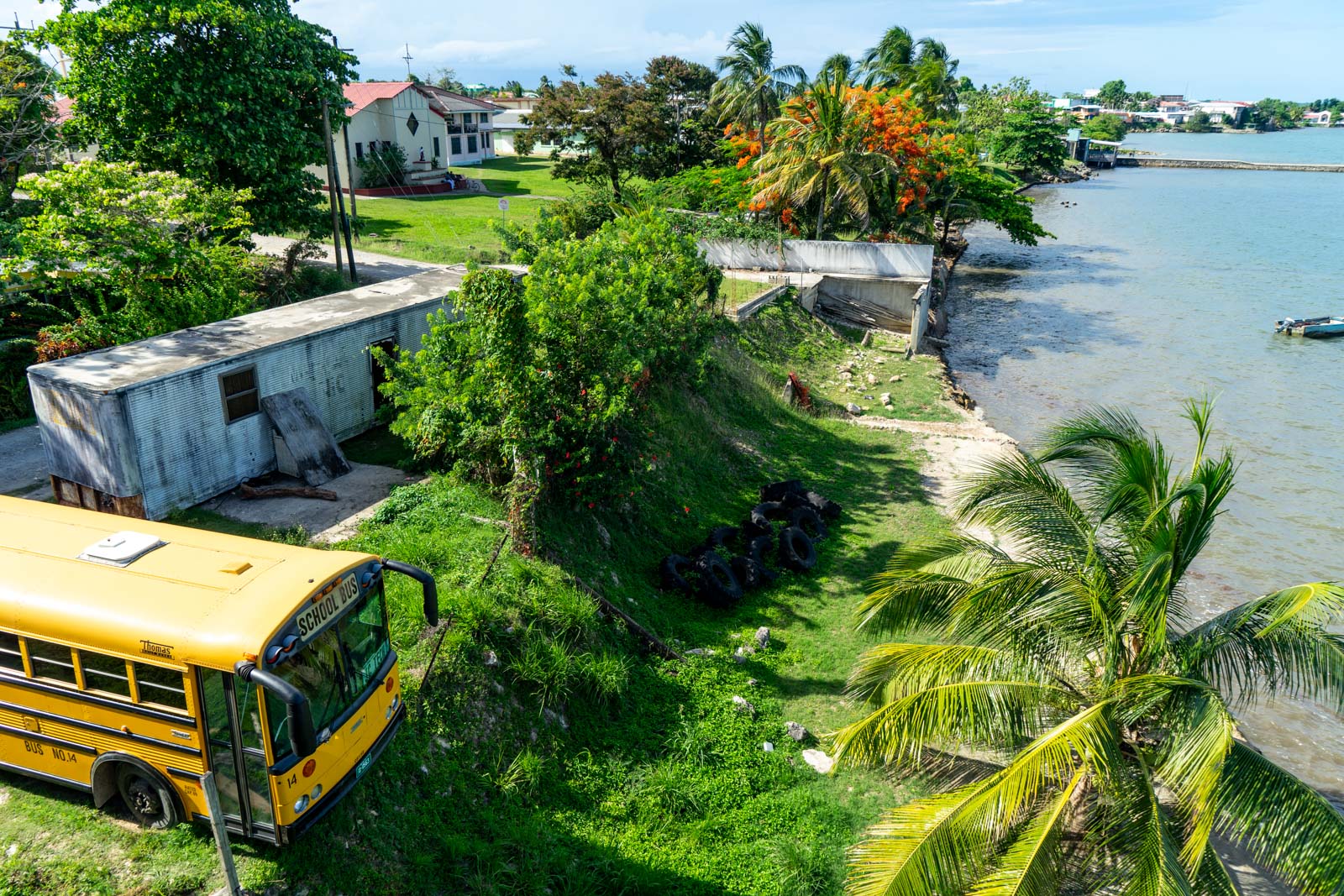 Belize is also a much safer country than most of Central America. Unlike many of its neighbours, it does not have a high crime rate and it is relatively stable politically.

It also has a tiny population – less than 400,000 people (compared to 17 million in neighbouring Guatemala or 9 million in nearby Honduras).

All of this creates an environment that is very comfortable for tourists (especially English-speaking ones like me, who manages to mangle Spanish every time I try to use it).

So it’s no surprise to discover that Belize is quite a popular place for people to take holidays – especially visitors from the US, with direct flights to Miami or Dallas just a couple of hours. 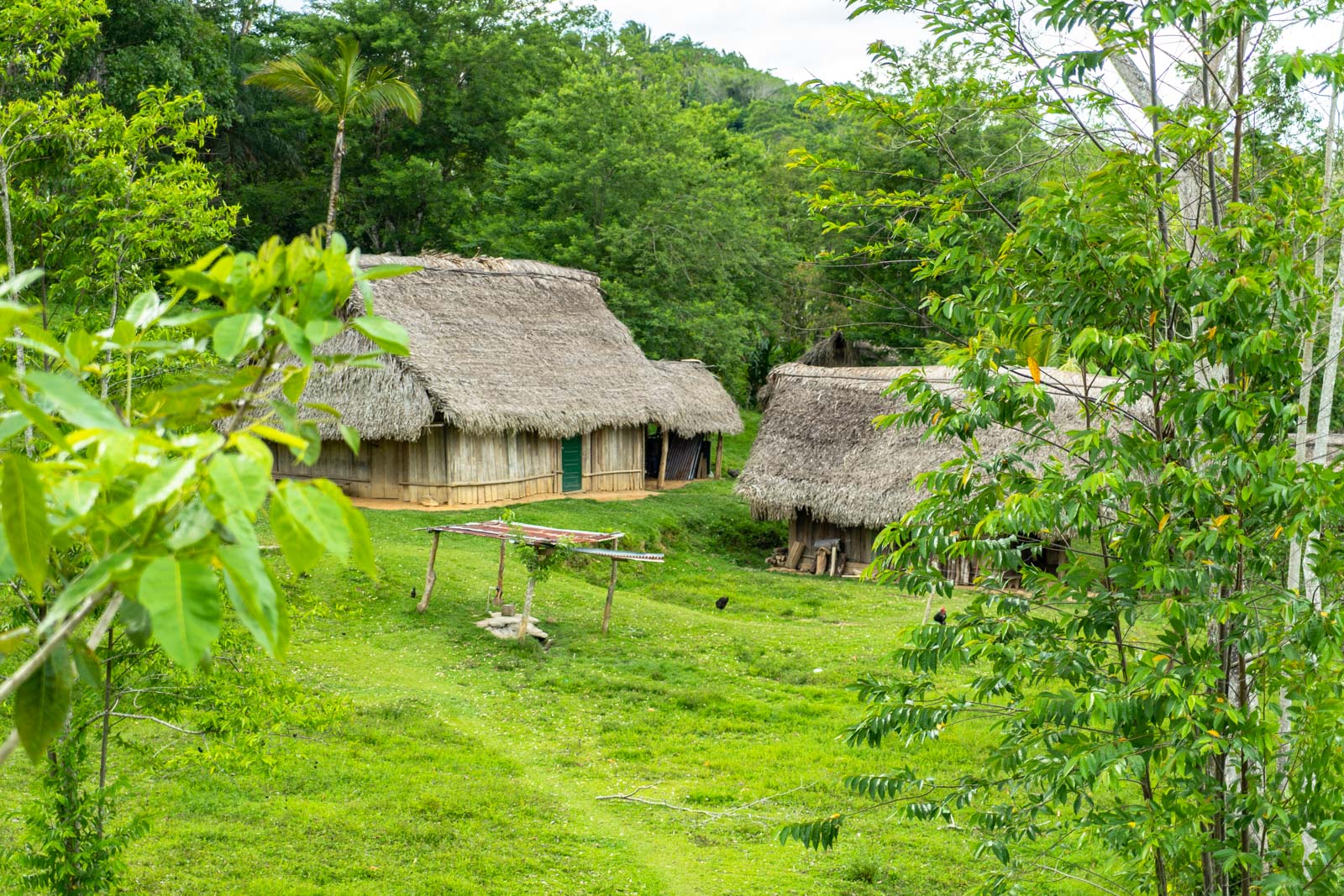 But, here’s the thing. Most international visitors go to the same places to do what they think are the best things in Belize.

They head to the most popular tourism town – San Pedro – for nightlife.

They stay on one of the islands – Caye Caulker – for beaches.

And, if they’re feeling a bit adventurous, they might go about 100 kilometres inland from Belize City to the jungle around San Ignacio.

How much do you know about Belize 🇧🇿? I didn’t know much before I arrived… but already I’ve discovered how special it is. An English-speaking country in Central America, with a Caribbean way of life. Belize is also a country of adventure! It’s famous for its reef and beaches – but there are incredible jungle and other sites inland to explore too. I’m loving it so far and look forward to sharing more with you over the next week!

However, I have headed to the south of Belize, where less tourists go. But, as I discover, there is so much here that they are missing out on.

What to see in the south of Belize

On my first day in Punta Gorda, a local tells me that, “to see all of Belize, you only need to see Toledo.” 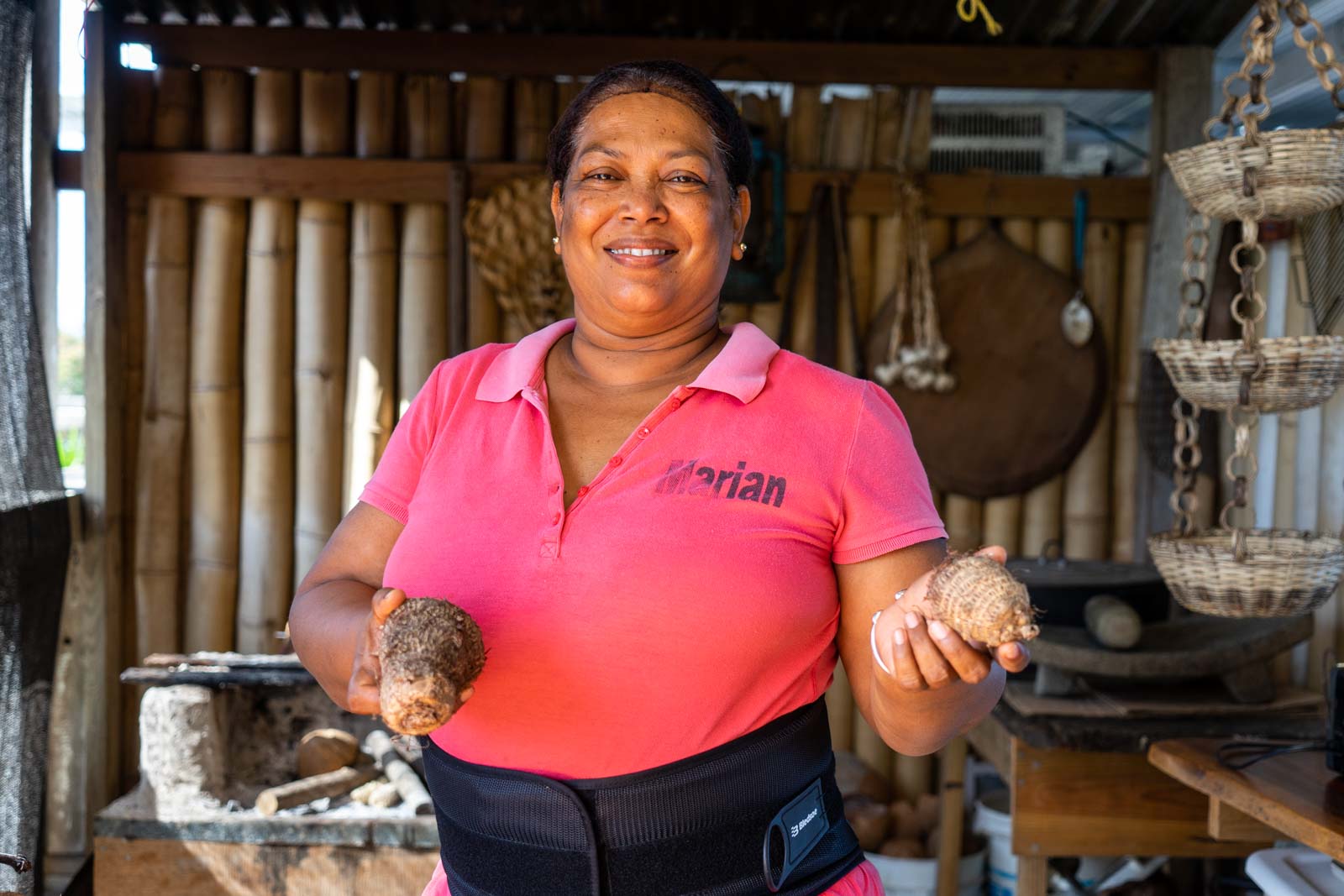 The reason this local has told me I can see everything here is because it does actually have a bit of all the things that make Belize so special.

It has a melting pot of cultures – Maya, East Indian, Creole, Garifuna and Mestizo.

It has the beautiful coastline with easy access to diving spots. And, inland, it has a rich mixture of local culture, Maya ruins, jungle adventure and nature experiences. 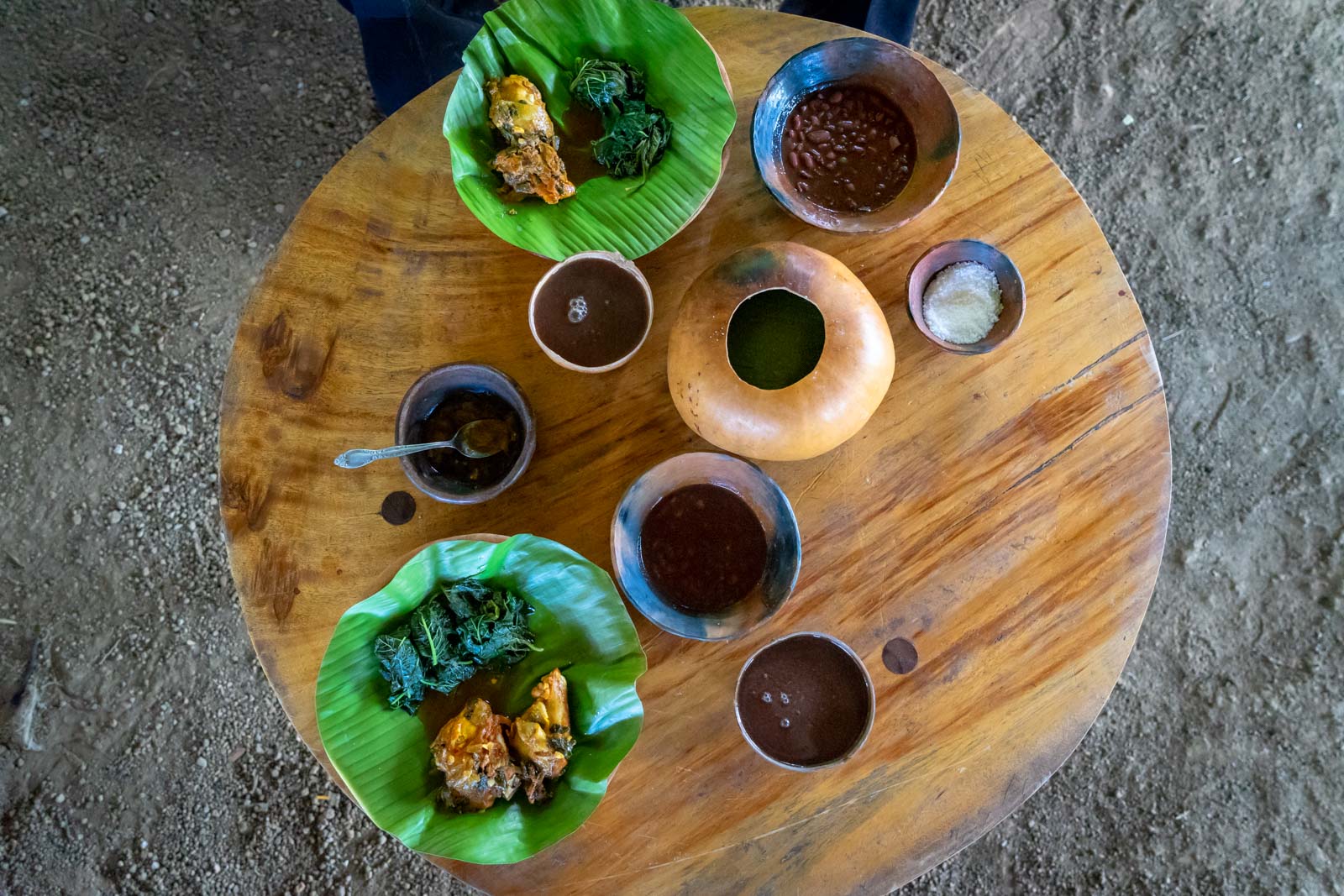 So, to put together this list of the best things to do in Belize that are off the beaten path, I’m going to focus on the district of Toledo, with things that are easily accessible from Punta Gorda. And I’m also going to cover the neighbouring district just to the north, Stann Creek.

The Lubaantun Maya site is probably the best ancient Maya city in the the south of Belize.

After a short walk through the jungle, you’ll find yourself amongst the ruins of large pyramids and other grand public structures. This is where ceremonies – and even human sacrifices – would once have taken place. 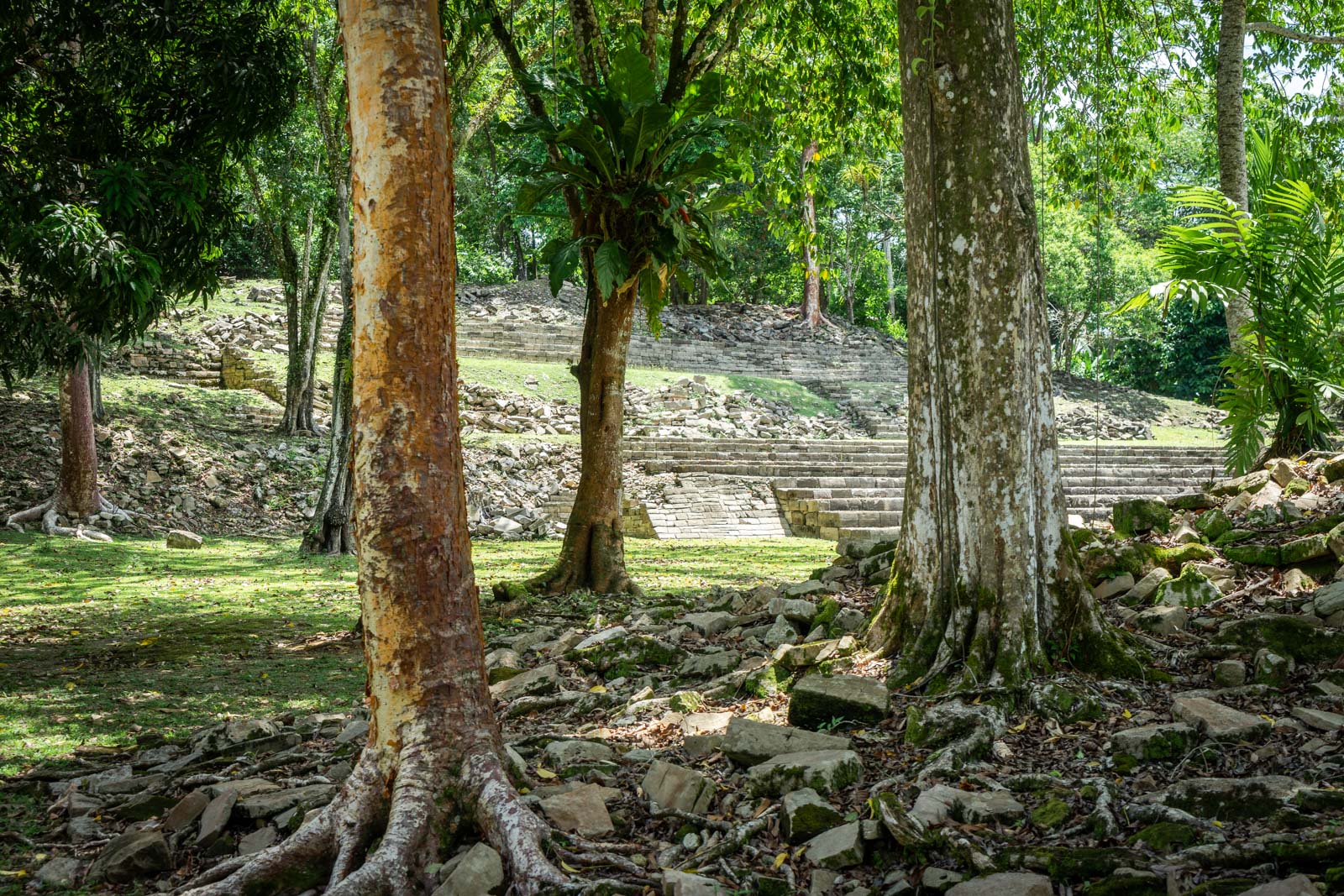 Another of the interesting parts of Lubaantun are the courts that were used for a traditional Maya ball game when the city was inhabited in the 8th and 9th centuries AD.

This wasn’t sport, though. The loser of the game would be put to death and so the courts were only used for matches to resolve disputes or other important issues.

Lubaantun is also well-known as the location where the most famous of the crystal skulls was said to have been discovered. However, modern research shows that it’s actually unlikely this story is true.

>> More info on a tour to the ruins here

Not too far from the Lubaantun site is Tiger Cave. It’s an enormous natural cave that goes for about 11 kilometres, although it’s only the first section that most people will visit.

It was once used by the Maya for important religious events and you can still see some artefacts and the stage that would have been used.

However, these days, most people visit for the natural beauty. The first cavern is 150 metres high, with sunlight shining in from different angles. 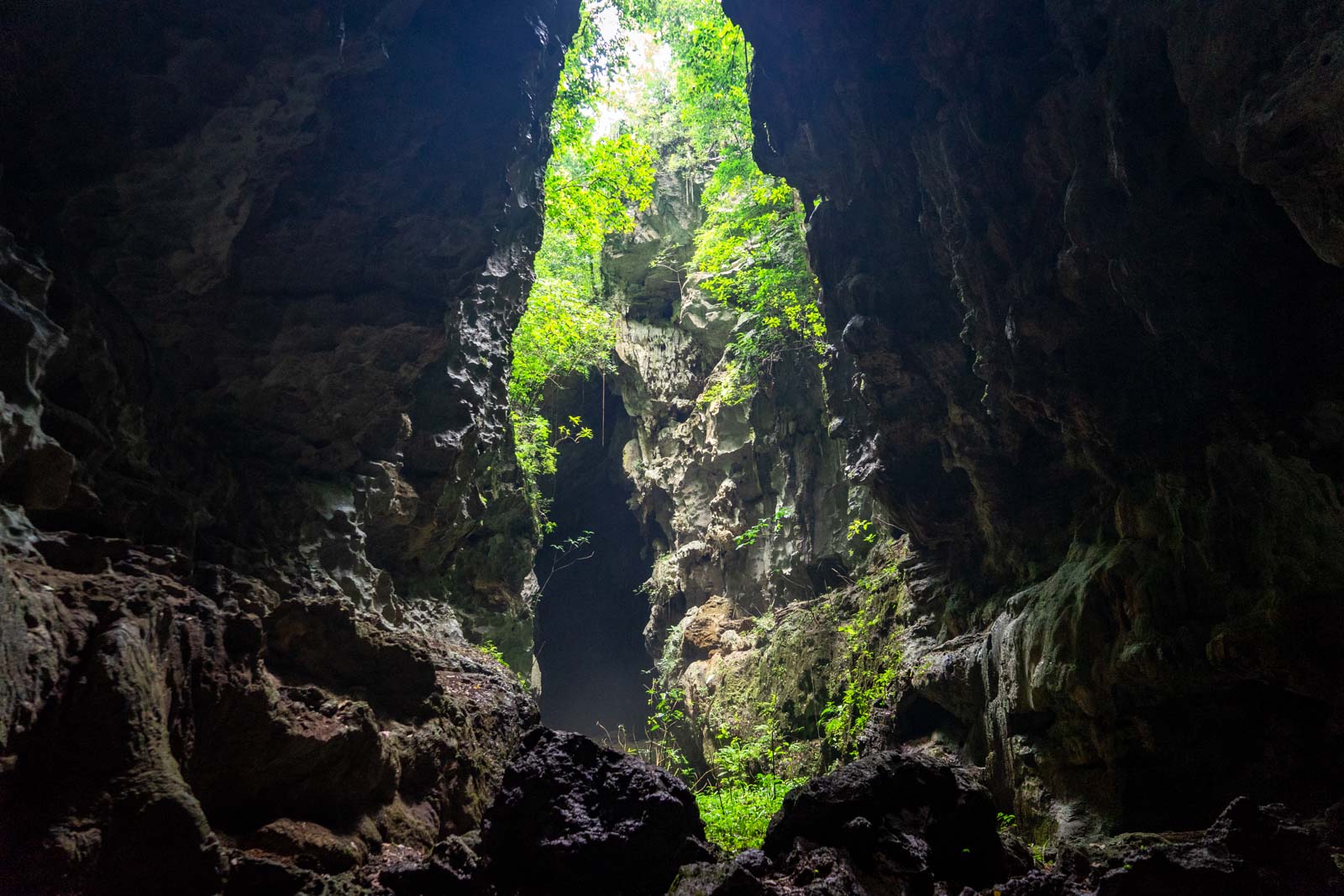 Tiger Cave is only visited by tourists a few times a month so it’s likely that you’ll have to whole place to yourself if you go (although you’ll need to go with a local guide).

It’s quite a spectacular experience to explore the enormous space, with its spiritual history, without any crowds.

>> You can organise a cave tour here

Between two of the traditional Maya communities in Toledo, you’ll find Rio Blanco National Park. It’s a conservation project that is run by the Maya communities as a way to protect the land and encourage ecotourism.

There is a nature trail you can walk along to see the local plants and animals. A bridge takes you across the river for great views. 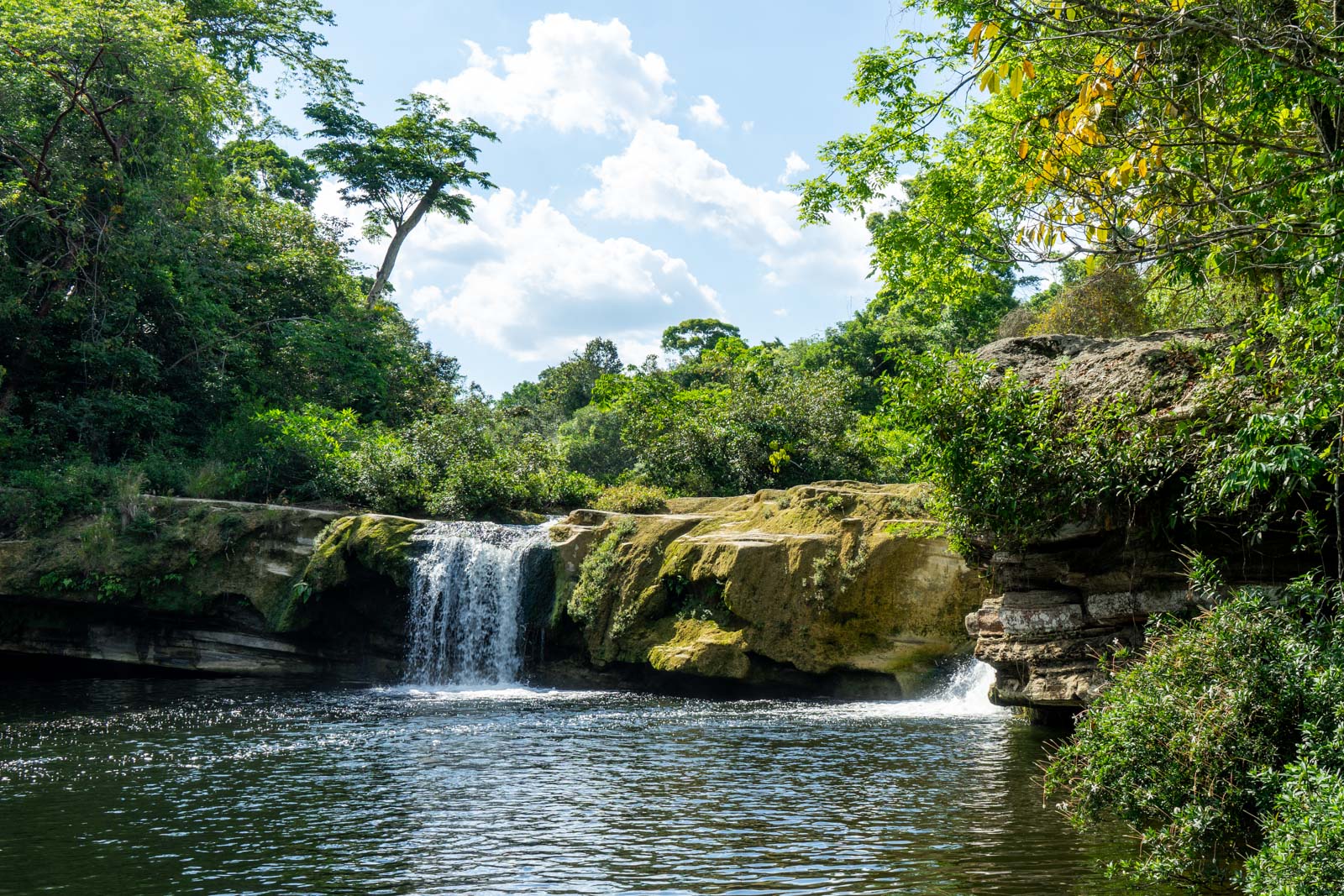 But the most popular part of Rio Blanco National Park is the large waterfall and swimming hole beneath it. There are rocks to jump off and it’s a fantastic place on a hot day (which is most days in Belize).

With so many ruins in this part of the world, it’s easy to think of the Maya as an ancient civilisation but, unlike the Aztecs or the Incas, the culture has continued and evolved until today.

There are lots of Maya communities near Punta Gorda that you’ll see as you drive around Toledo. To learn more, you can visit the Living Maya Experience, where you’ll be able to see the traditional way of life. 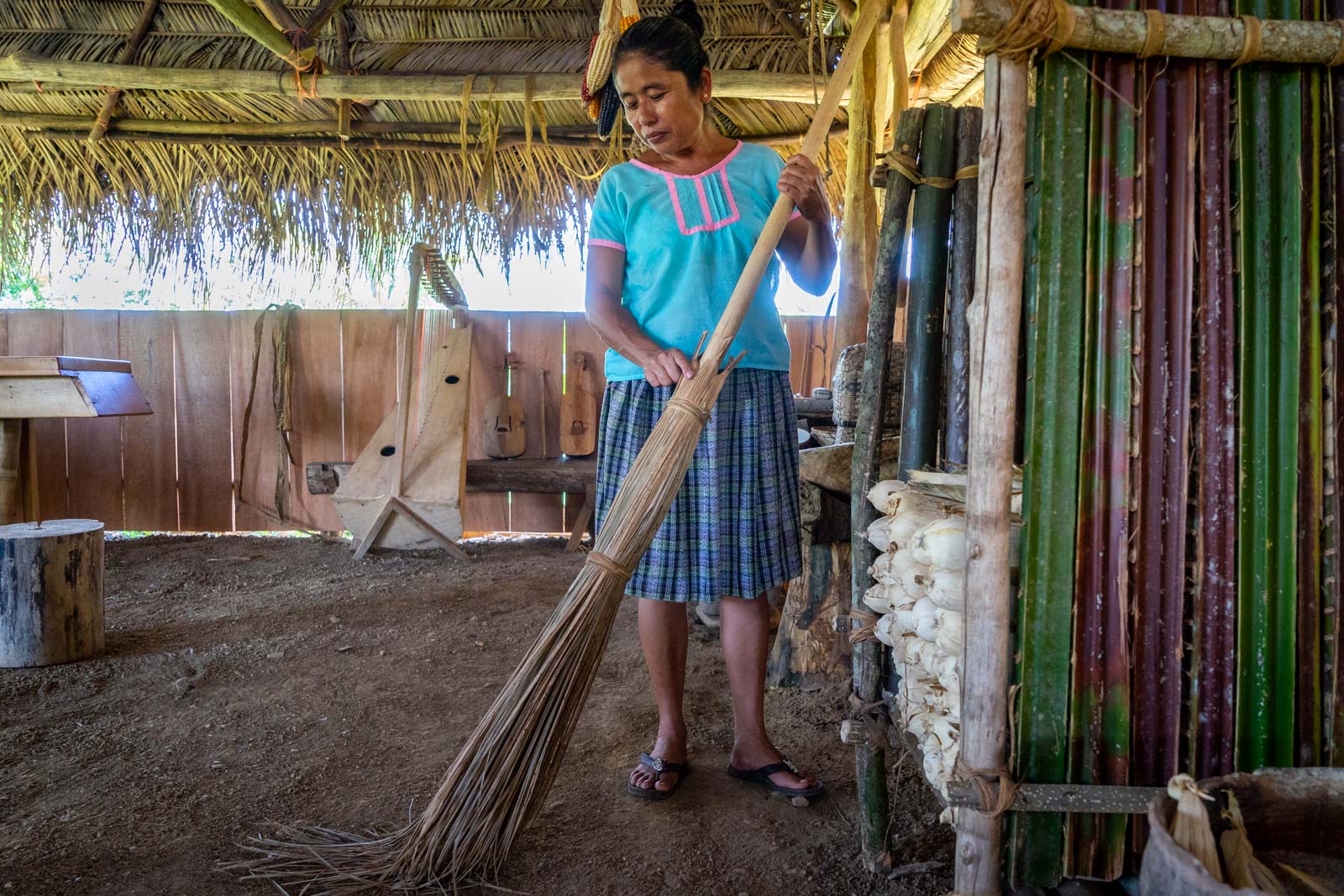 You’ll also get a delicious Maya meal served on palm leaves that you will eat with your hands, as it has always been done here.

One of the most important – and traditional – agricultural products in southern Belize is cacao, which is used to make chocolate.

A lot of the cacao plantations are not owned by large corporations but by local Maya communities, where each member of a village will have their own allotment. While some will sell what they grow to wholesalers, many people keep it and make their own chocolate. 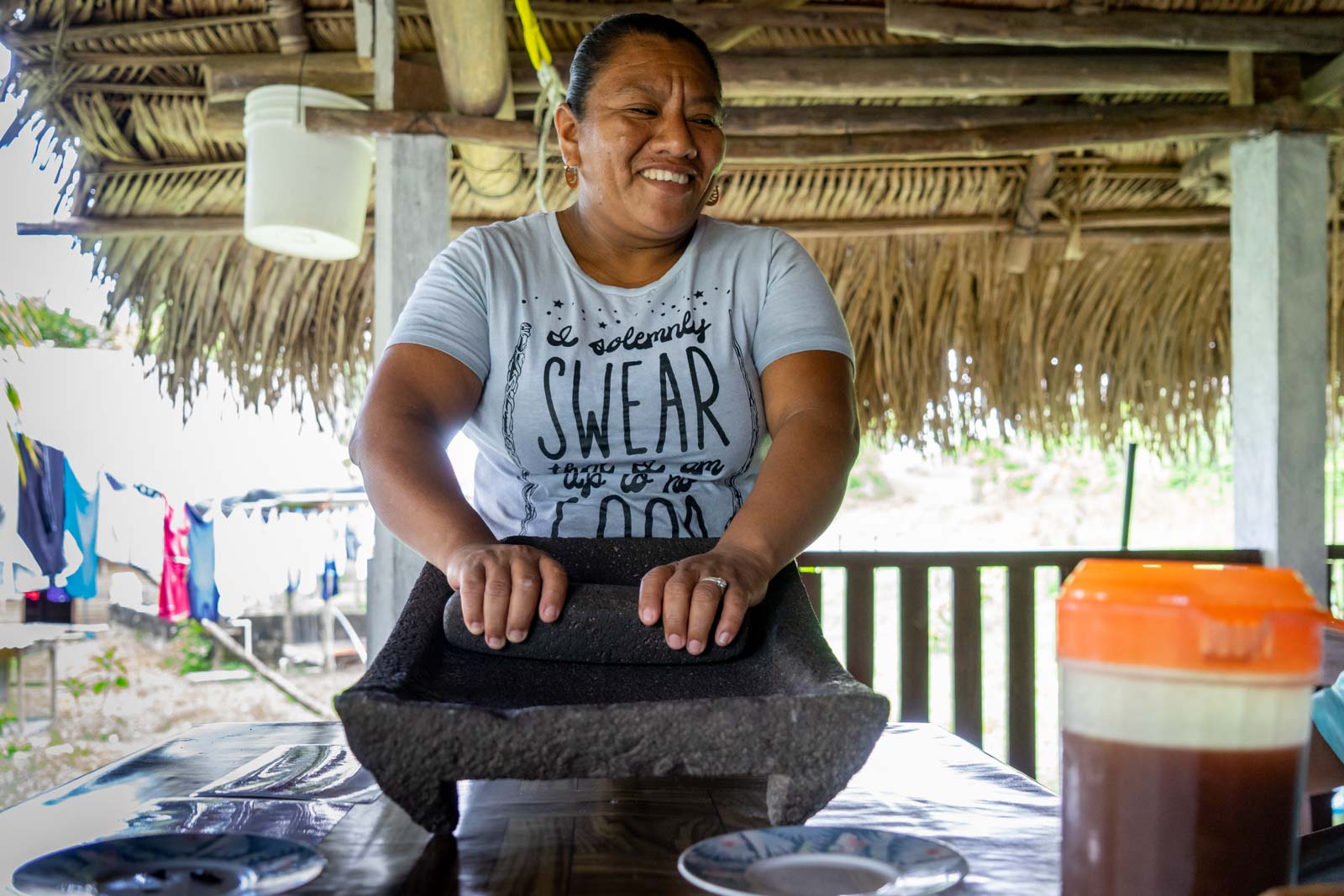 There are a few of these small local farms around Punta Gorda that offer a chance to see how the chocolate is made, try it for yourself, and taste some different products.

With so many cultures living around Punta Gorda, there is a terrific range of food. One particular cuisine I recommend you try is East Indian.

The East Indian people were brought from India to work on plantations in the Americas by European colonialists. The culture that has evolved since then is a mix of their Asian heritage and Caribbean influences.

It means the food has some elements of traditional Indian cuisine but uses the ingredients and spices that are easily-accessible in Belize. 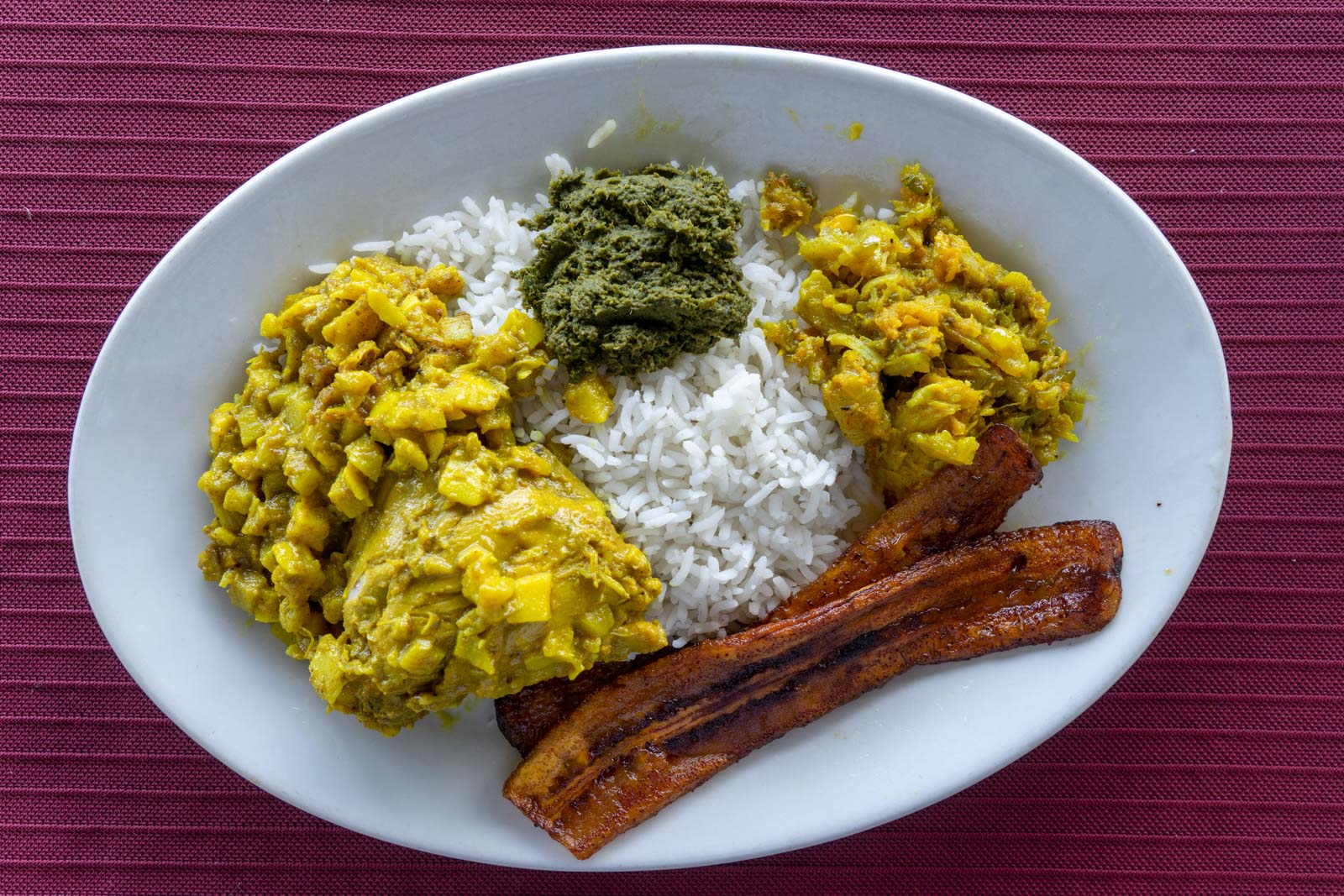 I would recommend you have a meal at Marian’s Bayview, which is a family-run restaurant with the best East Indian food in Punta Gorda.

Nearby is Asha’s Culture Kitchen, which has a more modern twist on the cuisine at a relaxed waterside setting.

Further out, near some of the sights, is another great option called Coleman’s Cafe.

Hang out in Hopkins

Although I find the culture and the inland nature of Belize to be incredible, it would be silly not to also spend some time on the coast. The beaches are so beautiful and have the feel of the Caribbean to them.

The small town of Hopkins is a perfect place to relax and enjoy the beaches. The white sand and warm water is inviting during the day and then the friendly community opens its arms in the evenings. 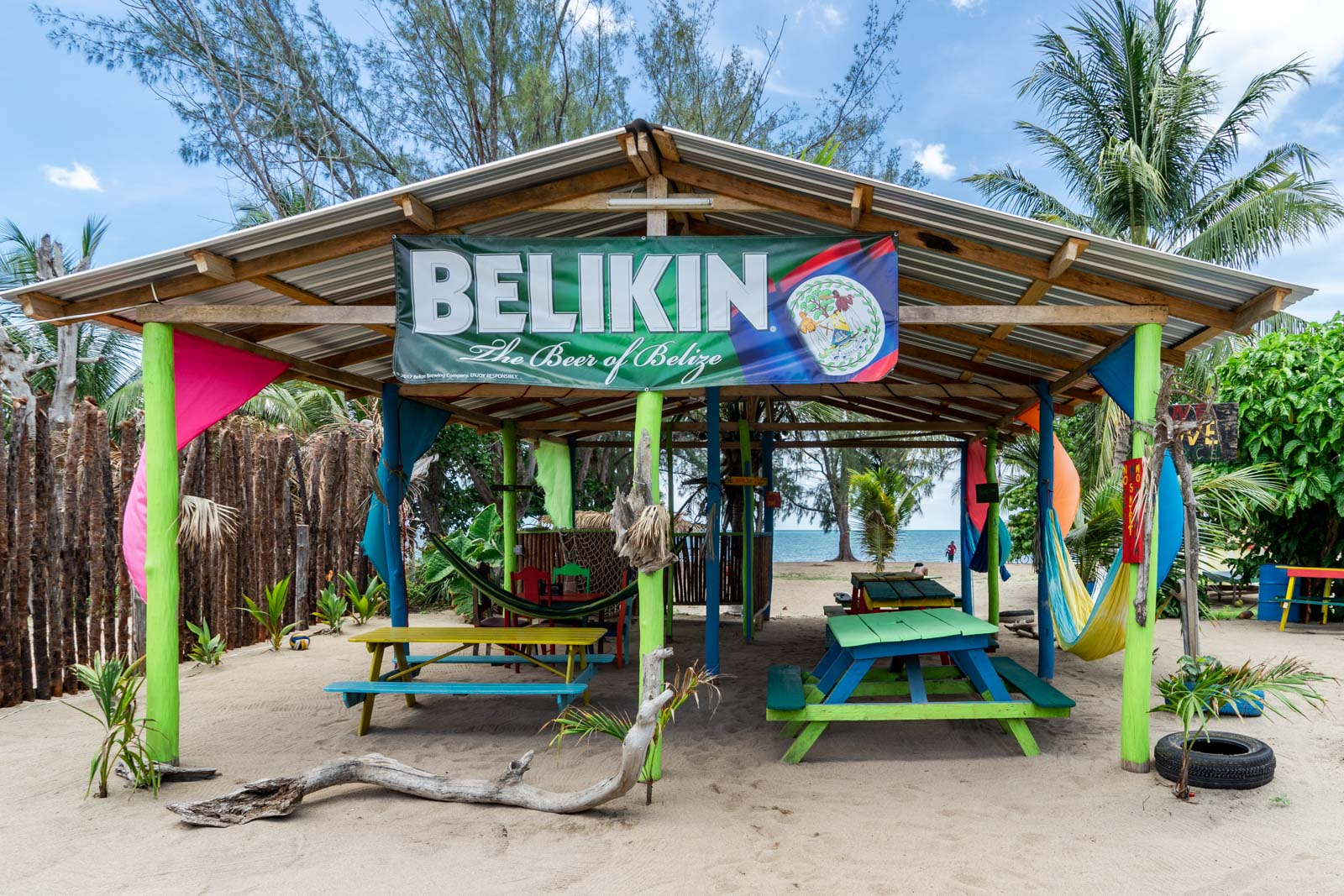 For a meal and a drink in Hopkins, I would suggest Ella’s Cool Spot and Loggerheads Bar and Grill. There are quite a few venues that do live music and I would recommend Queen Bean to hear some Garifuna performances.

The Garifuna people have an interesting history in Belize. They are direct descendants of a group of African slaves who escaped after the ships they were in crashed near St Vincent in 1635.

Even today, centuries later, they have a strong and vibrant culture. The way that is probably demonstrated the most is through the Garifuna music – and the drumming, in particular. 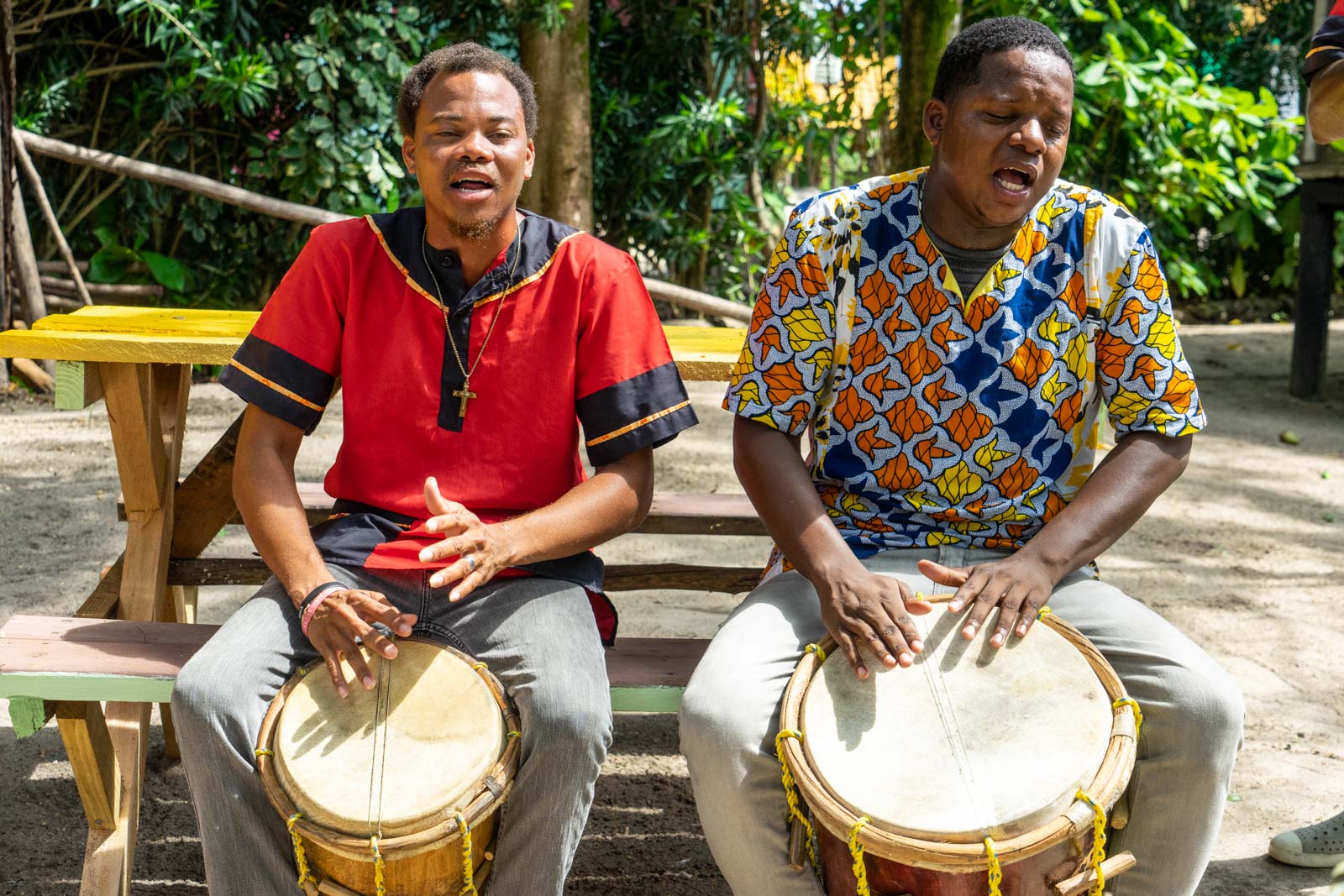 In Hopkins, there is a drumming school called the Lebeha Drumming Centre run by some of the local Garifuna guys. They happily welcome visitors to come and hear some of their music and learn how to do the drumming yourself.

Snorkelling or diving from Placencia

My final suggestion is actually the most touristy on this list. The beautiful beach town of Placencia has become more popular in recent years with people who are looking for a relaxed setting with enough restaurants and nightlife to be amused.

So, it has become the main hub in the south of Belize for snorkelling and diving trips to the incredible Belize Barrier Reef. 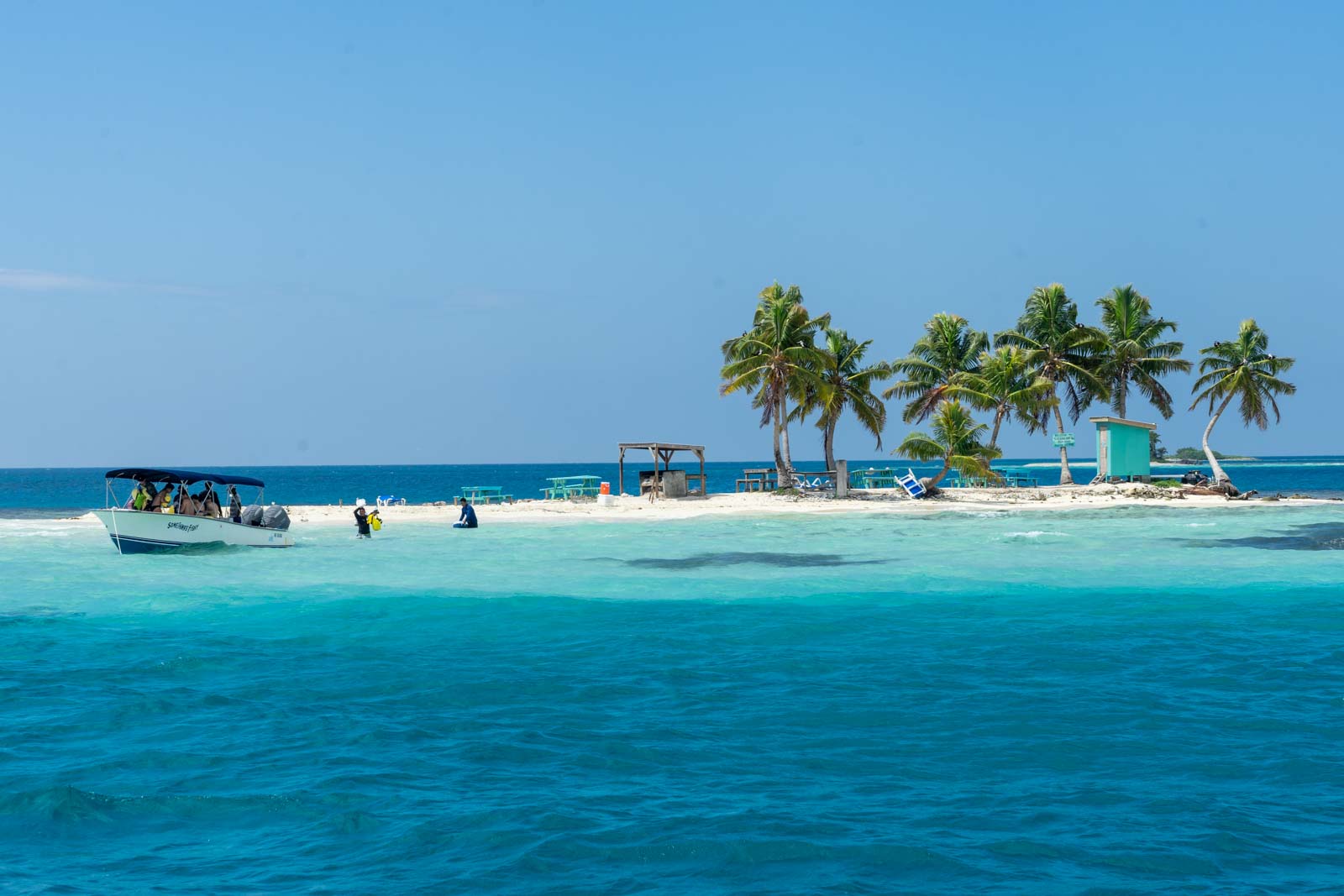 You really can’t come to Belize and not visit the reef – it is undoubtedly the highlight of the country and one of the world’s natural treasures. But doing it from Placencia will be much more casual than from Caye Caulker or San Pedro.

I would highly recommend you do your trip with Splash Dive Centre. If you are interested in spending a few days doing a diving course, even better.

Placencia is a wonderful place to base yourself while you do your lessons and trips out to the nearby cayes. 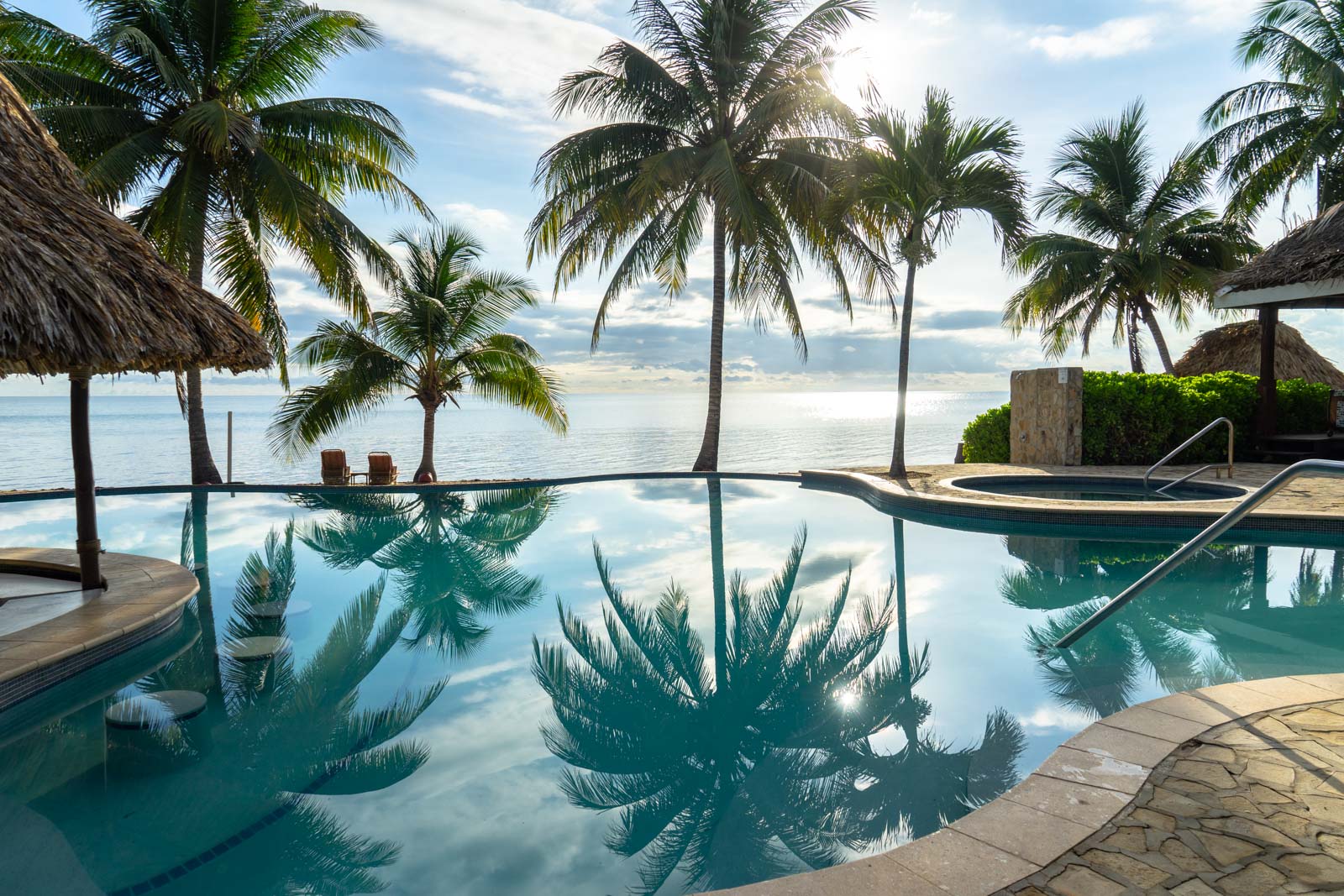 There aren’t too many places in Central America where you can still feel like you’re having an adventurous holiday, but do it in the safety of comfort of a stable English-speaking country. But Belize offers all of that and more.

The flight connections to Belize can be a bit tricky if you’re coming from anywhere other than the US. There are no direct (or even convenient) flights from Europe at the moment, for instance.

I imagine that will change as the country grow in popularity but, for now, that actually brings another benefit. It means you won’t have the hordes of European summer holidayers to compete with on your trip.

Belize still has a lot of discover and you can be one of the first you know to do it.

Time Travel Turtle was supported by Travel Belize but the opinions, over-written descriptions and bad jokes are his own.