Driving along the desert highway out of Amman, the dry hot sands of Jordan stretch out in every direction.

Most people head south from Amman towards hotspots like Petra and Wadi Rum. Going in the opposite direction, I’m seeing road signs for places like Iraq, Syria and Saudi Arabia.

Of course, we all know the political instability that defines these countries these days. But, in terms of the broader history of the region, there have been much more important periods of time here. 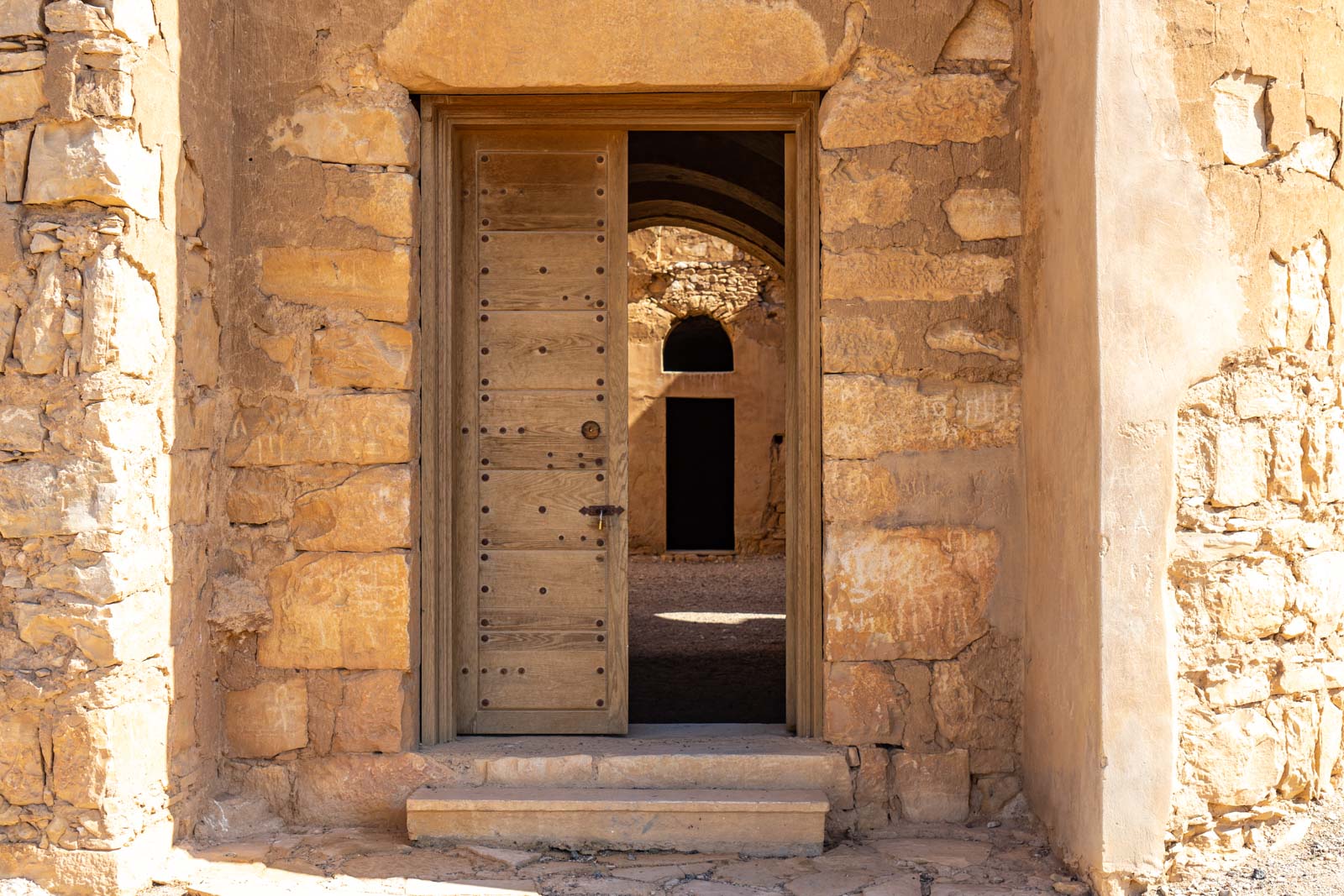 One of these times was a period of about 100 years in the 7th and 8th centuries called the Umayyad Caliphate.

(A ‘caliphate’ is the name given to an Islamic state, with its ruler called a ‘caliph’. Think of it being pretty much the same as an ’empire’ being ruled by an ’emperor’.)

We all know of the Roman Empire, but the Umayyad Caliphate is hardly a household name. Which is a bit strange, because it was enormous!

In about the year 750 AD, it stretched from Central Asia, through the Arabian Peninsula and North Africa, all the way into Spain and Portugal. That makes it the sixth-largest empire in history by size. 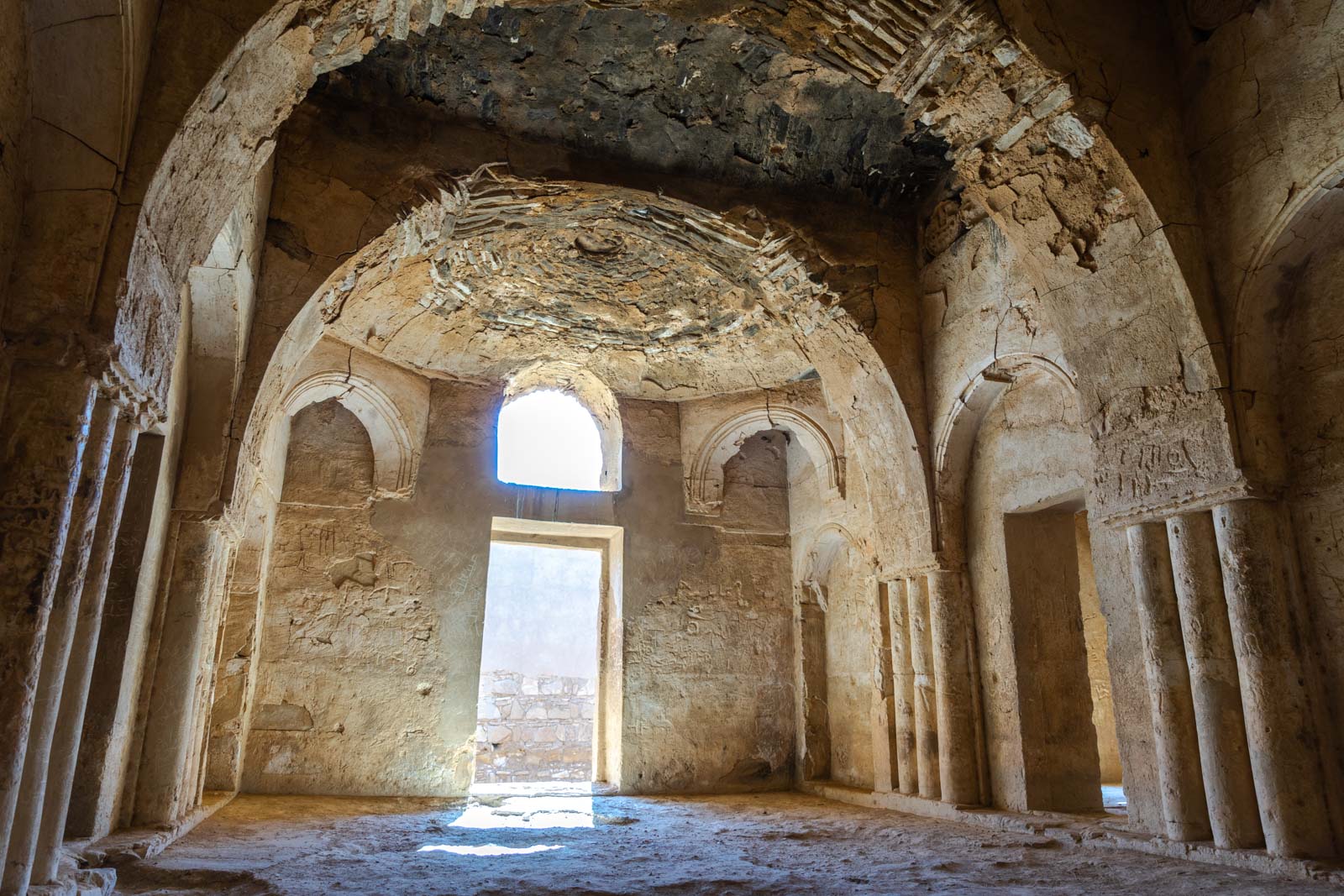 At its peak, there were 33 million people who were part of the Umayyad Caliphate. That was about 15 per cent of the entire world’s population at the time – another very impressive fact.

But I actually don’t want to go into too much more detail now about the Umayyad Caliphate except to say that the reason I’m on this near-empty highway in Jordan is to find some incredible archaeological sites that have survived from this period.

The capital of the Umayyad Caliphate was in Damascus, not far from this part of northern Jordan that I’m now in. Across the deserts here are the remains of what are usually called ‘castles’. 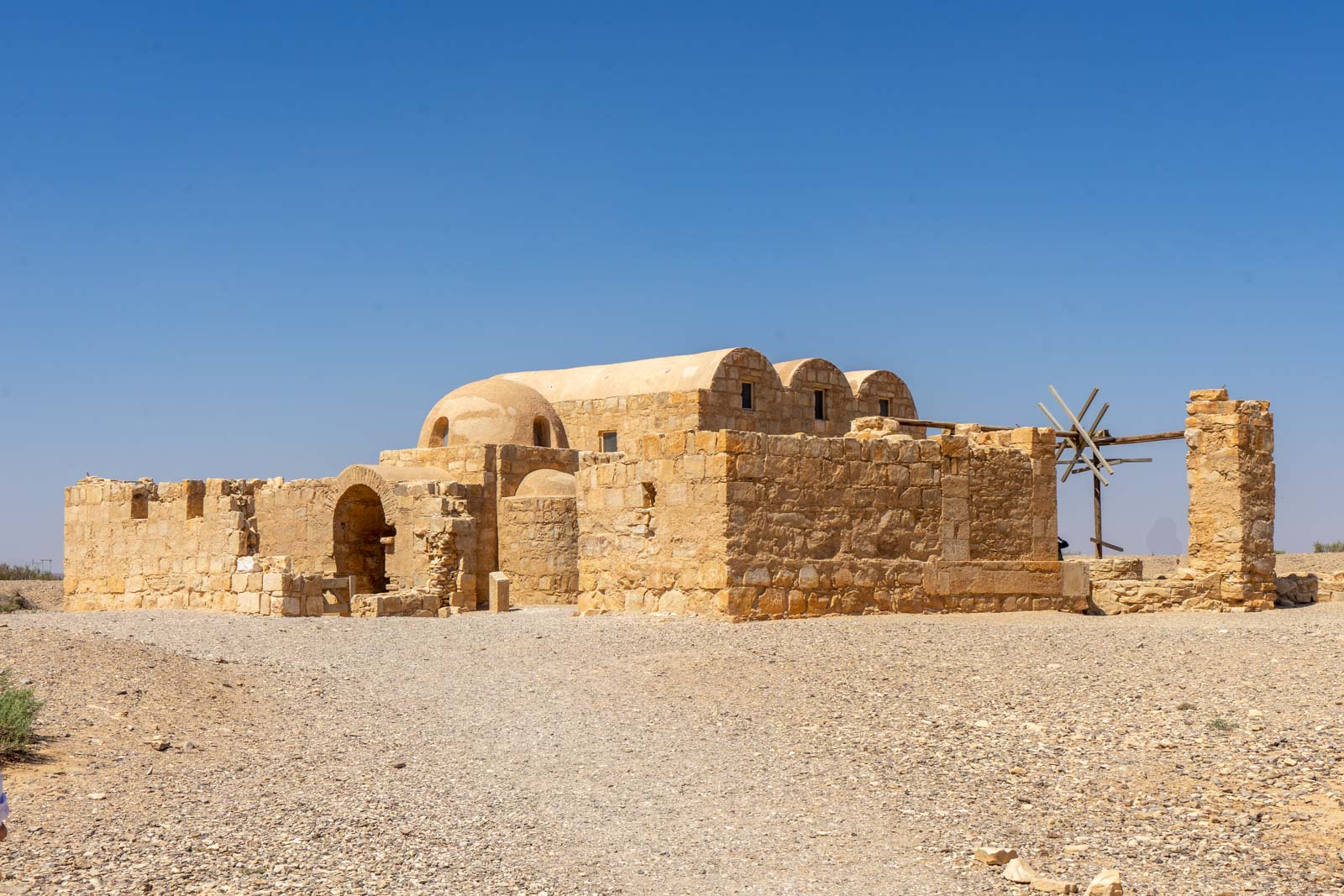 You can see why they get called that – they do look a bit like castles. But it’s not a perfect way to describe them because they weren’t necessarily fortifications.

These desert castles of Jordan had different purposes. They were inns for traders to stop at for a rest, they were country estates for wealthy friends of the caliph, they were agricultural bases, or they were military bases. 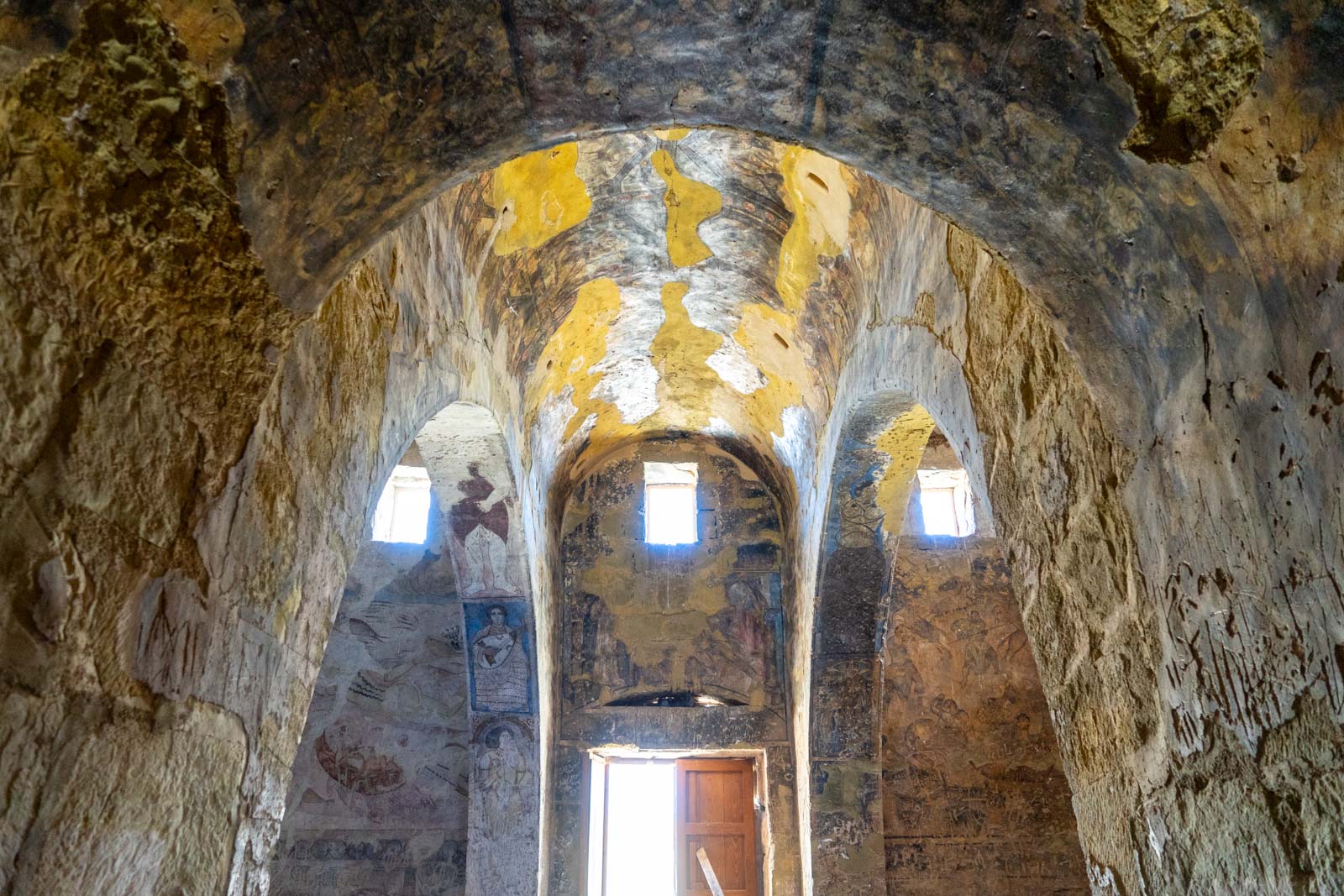 Who knows how many there once were. What is impressive is that there are still quite a few left today, more than 1200 years after they were built. While there are some in neighbouring countries, the majority of the remaining Umayyad desert castles are here in Jordan.

Driving along the highway, one of the castles appears on the horizon and becomes clearer as I get closer. It’s surrounded by a whole lot of nothing… just arid desert with the occasional shrubs. It makes this stone edifice look even more striking.

This is Qasr Al-Kharanah, one of Jordan’s best desert castles to visit from Amman. 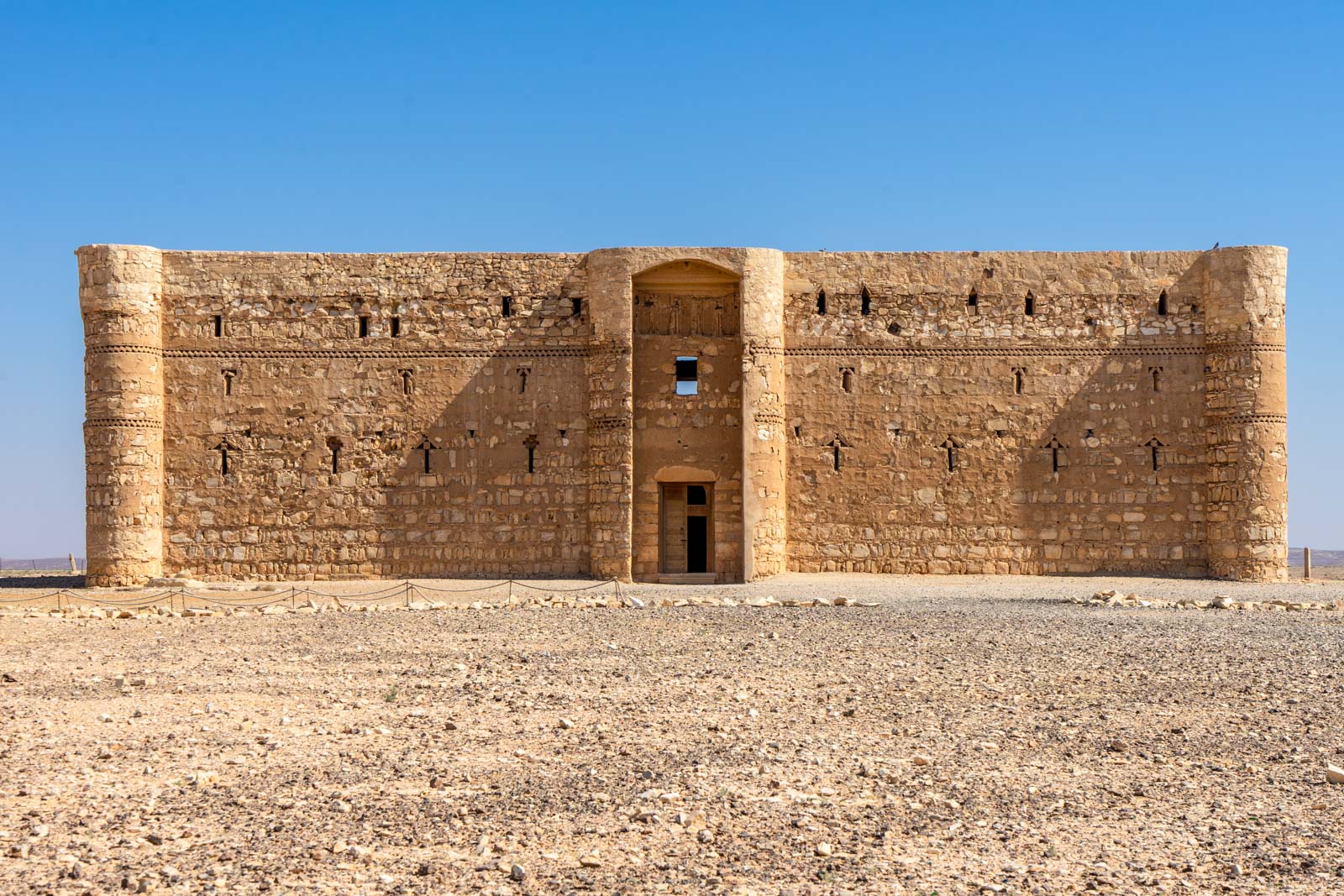 There’s nobody else here when I arrive and I make my way inside, through the doors of a large entranceway, into a central courtyard with no roof that has rooms on four sides and two levels.

Qasr Al-Kharanah is quite large and it takes a while to climb the stairs, look in the rooms, and climb through small connecting doors. 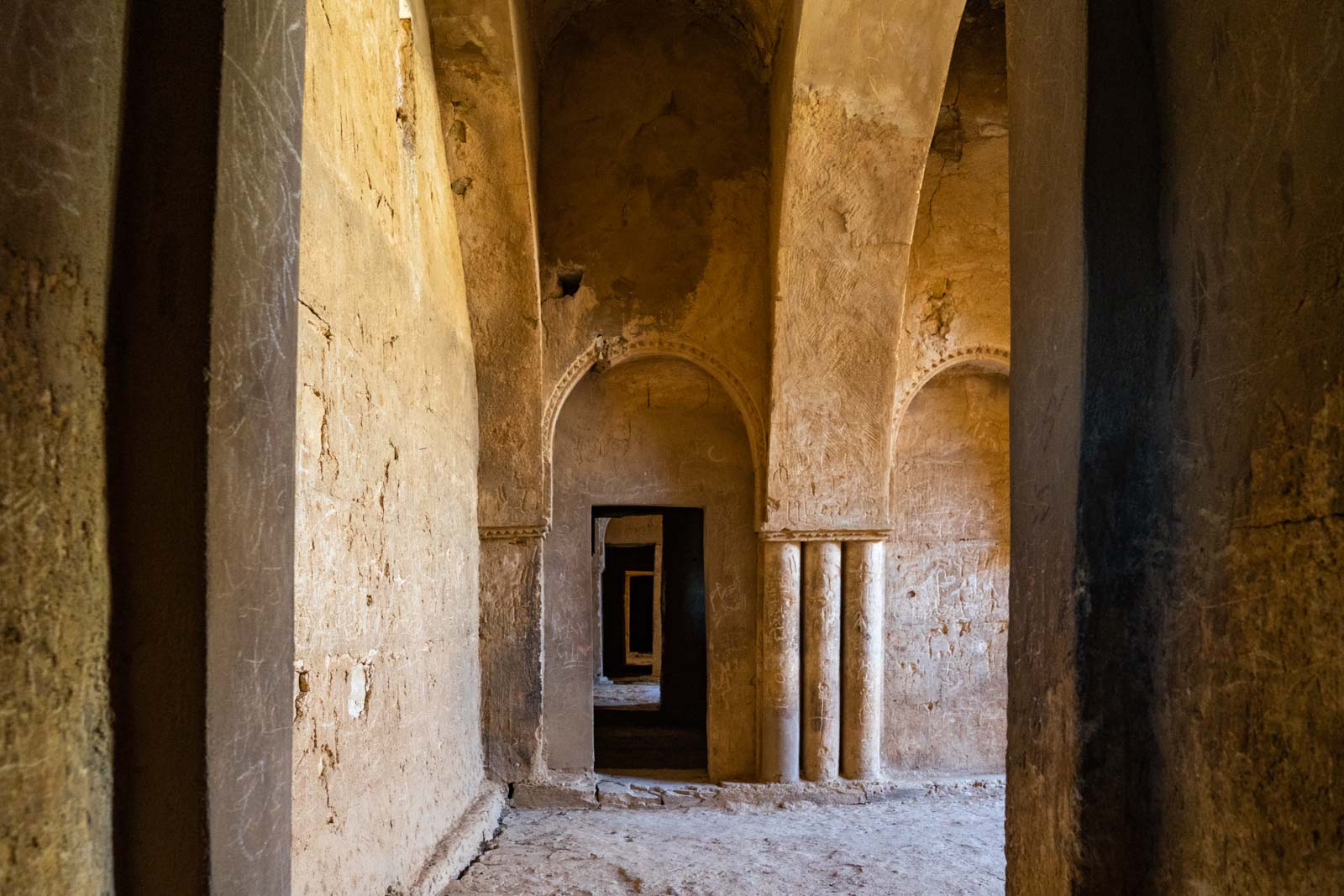 A few times I startle birds and they quickly and loudly fly off, startling me in return.

It’s solidly built and so perhaps it should be no surprise that it has survived for so long. I’m not sure if it had ever been attacked, but a sign at the entrance says the best guess is that it was once an inn – so hardly a prominent target for anything other than weary travellers. 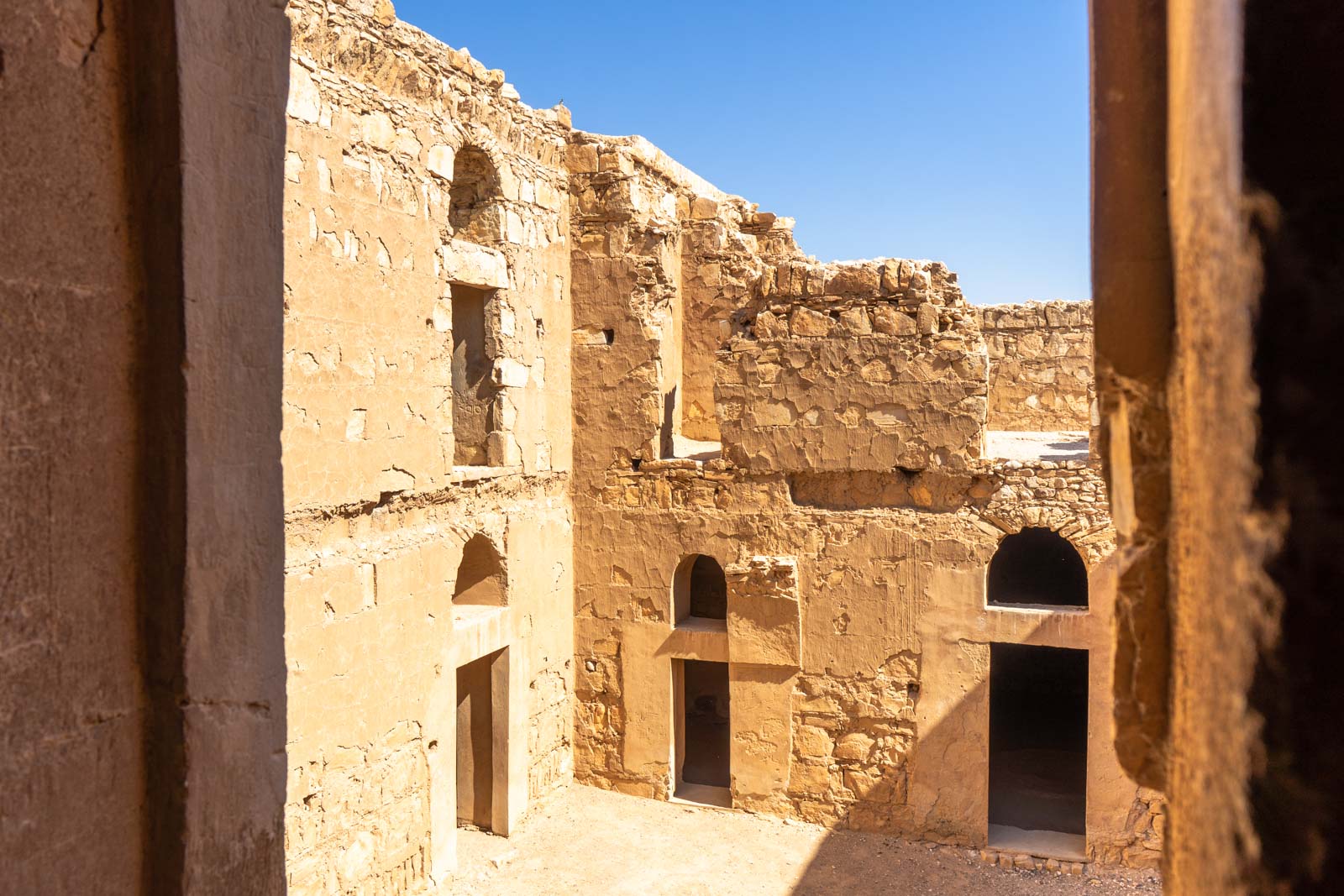 I took a couple of 360 photos to try to capture the scale of the site.

This one shows you the view from the central courtyard of the castle.

And this one shows you what it looks like inside one of the rooms on the upper level.

Back in the car, it’s time to head to the next of Jordan’s desert castles.

Driving further out, the road signs are counting down the kilometres until the borders with Iraq and Saudi Arabia.

It’s not too much longer, though, until I arrive at the next desert castle, Qasr Amra. 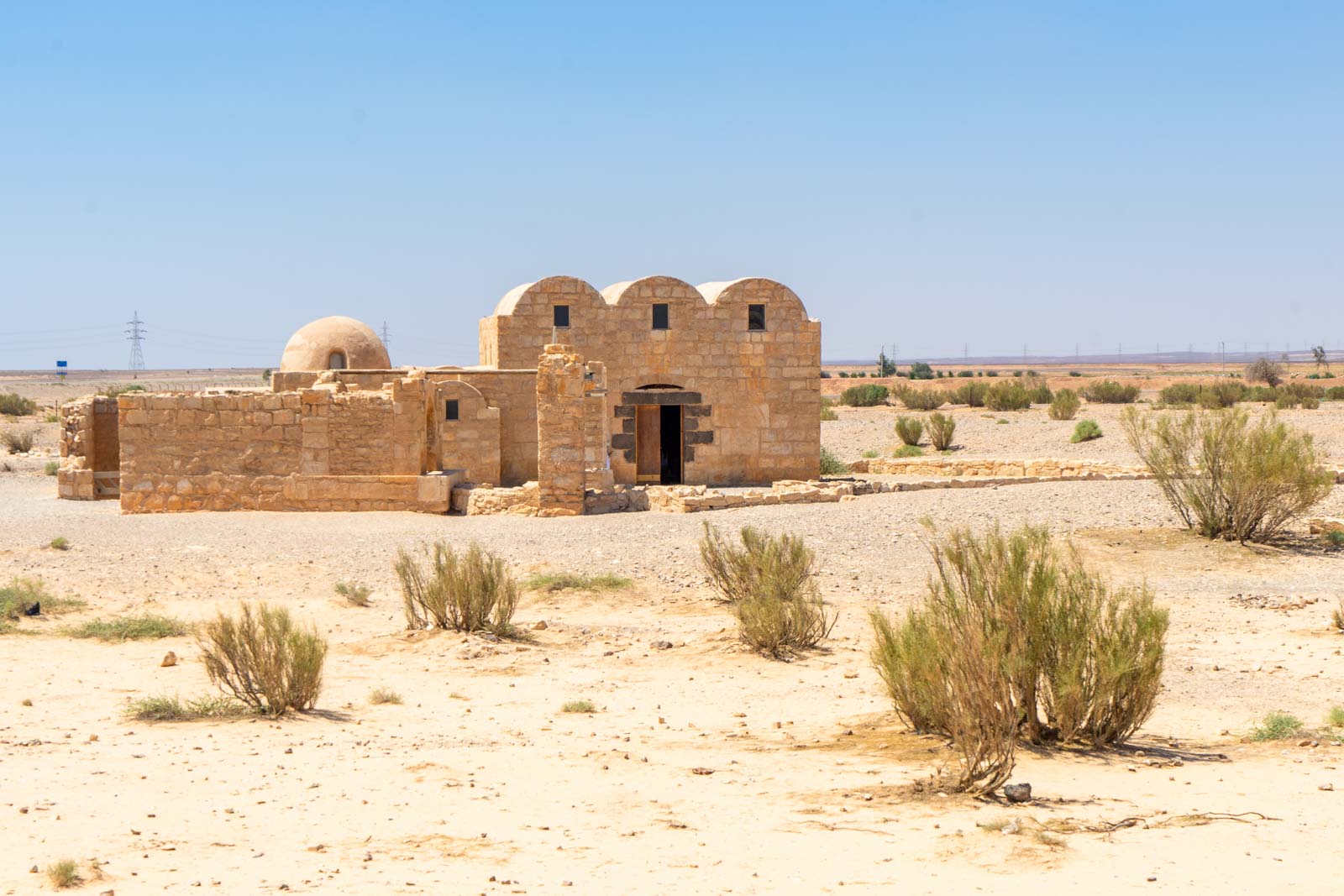 It’s a small structure – certainly nothing like the imposing Qasr Al-Kharanah. In fact, I think you would possibly even miss Qasr Amra if you weren’t looking out for the signs.

But don’t let the size deceive you. In some ways, it is the best of Jordan’s desert castles. It is, after all, the only one that has been listed by UNESCO as a World Heritage Site!

It’s not the structure that makes it worthy of being included on the World Heritage List. It’s not the size, its construction methods, its purpose. It’s what is inside. After arriving, a local guide has followed me down to ‘unlock’ the building. He starts to talk and I realise I am now trapped in a tour.

Seeing as I had already paid an entrance of 3 dinar, perhaps the door was already going to be unlocked. At first I’m a bit cranky I’ve fallen for the trick (because I know he’s going to ask for more money at the end), but as he starts to point to different wall paintings and tell the stories behind them, I’m glad he’s here. It’s these paintings that are the most important part of Qasr Amra and the reason it has been recognised by UNESCO. They are one of the most important examples of early Islamic art – and they are out here in this small building in the middle of the empty Jordan desert! 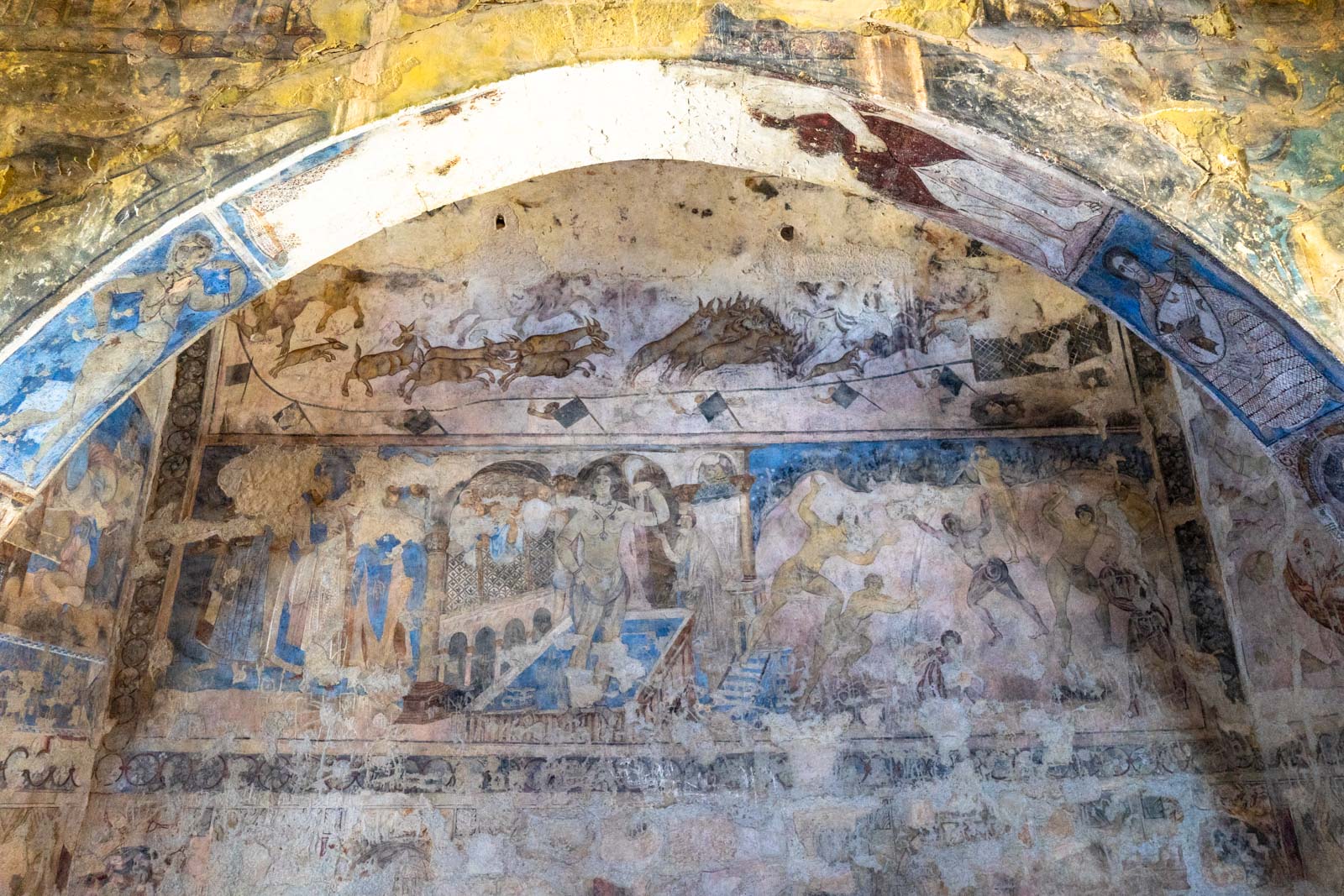 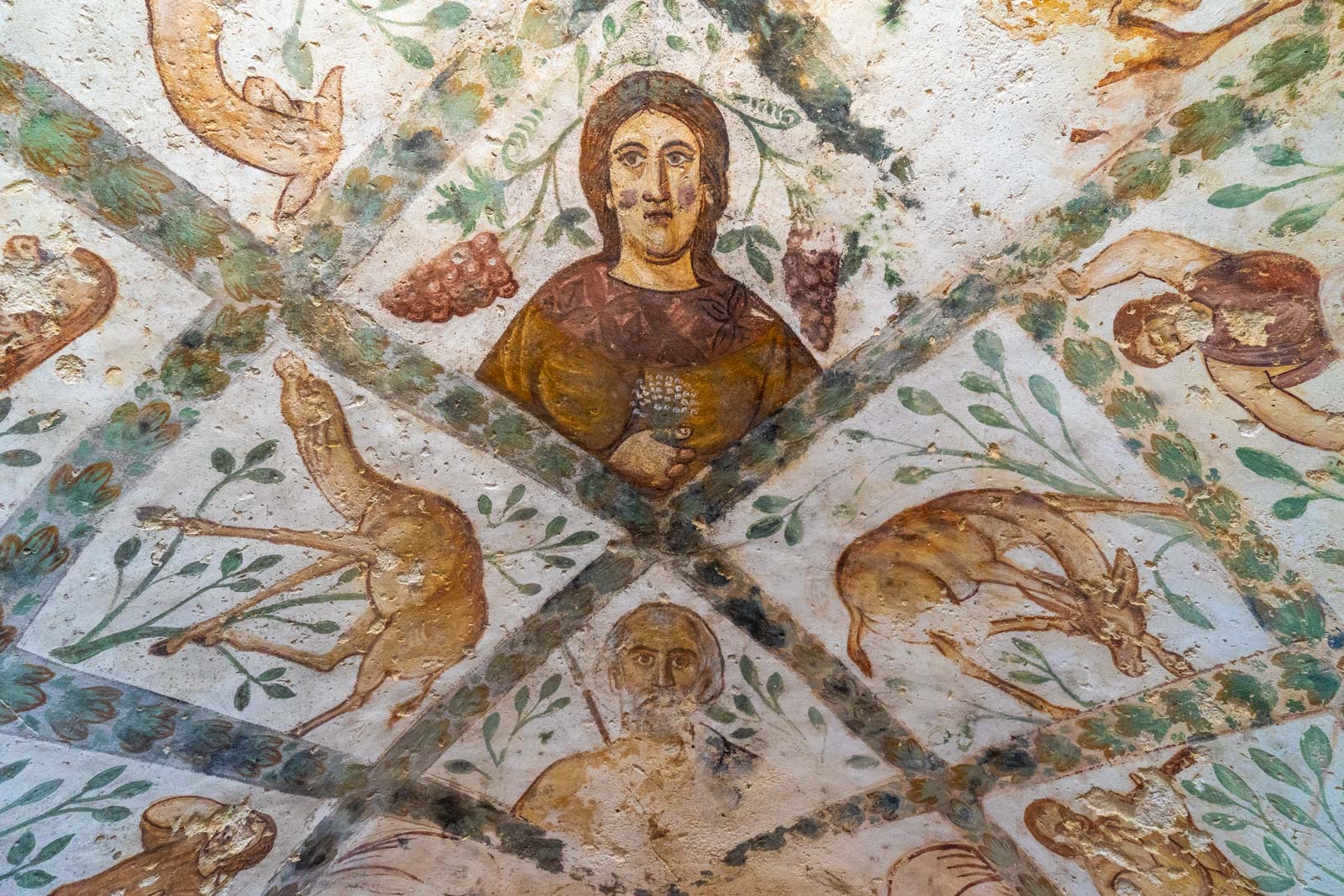 There are beautifully detailed paintings of kings, there are large hunting scenes, and there’s an incredible depiction of life from birth to death.

These paintings are old and there has obviously been some restoration work done. But there is something quite powerful in the way they show their age. Oddly, it makes them feel timeless to me. They may be from a particular era but they transcend that because they have such impact still today. 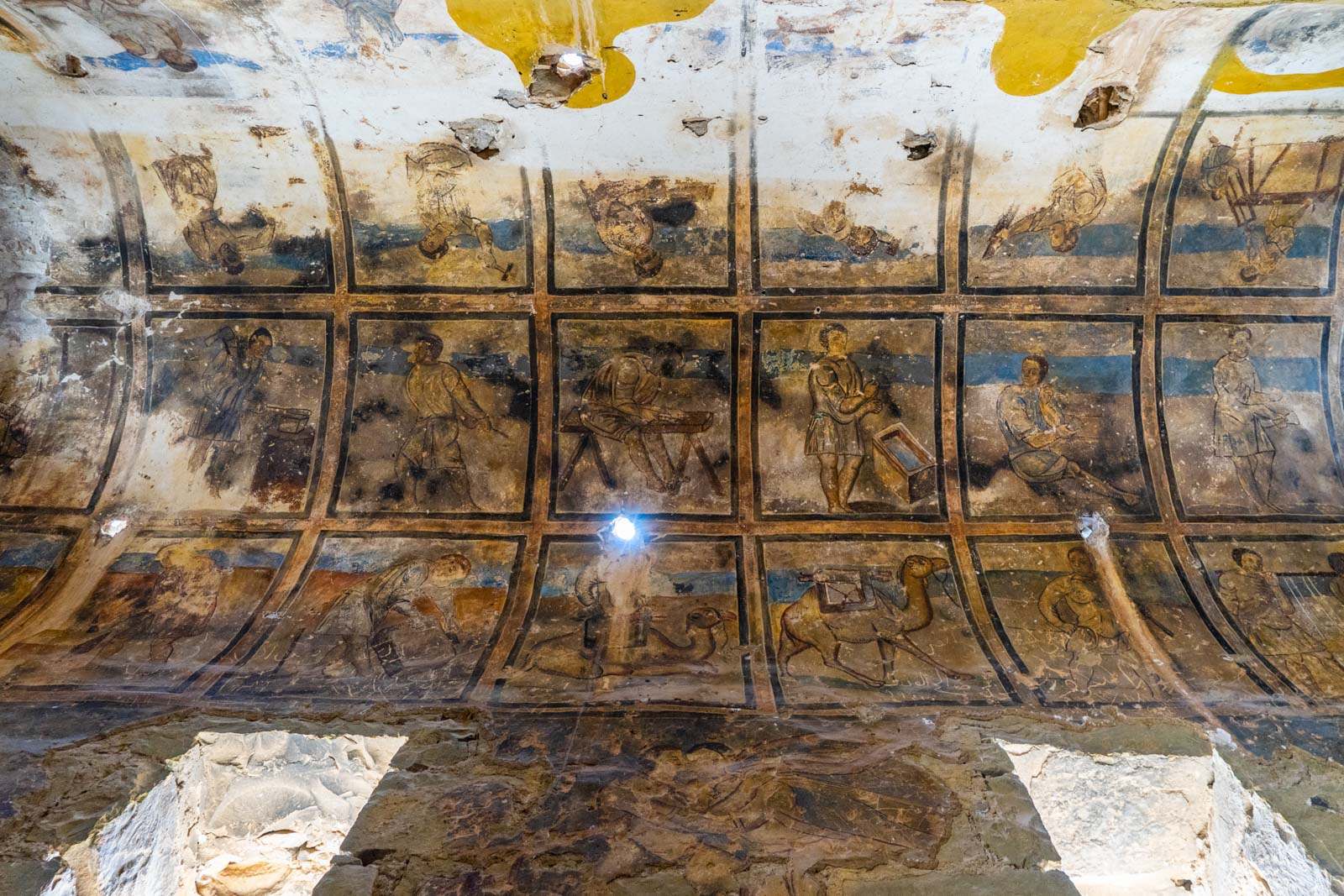 I’m sure part of the reason I feel this way is because of the setting.

When you go to an art gallery in Italy and see an ancient masterpiece, there is something rather sanitised about the experience. But here, in the cool stone castle surrounded by desert, with very few other tourists, there’s a degree of adventure. 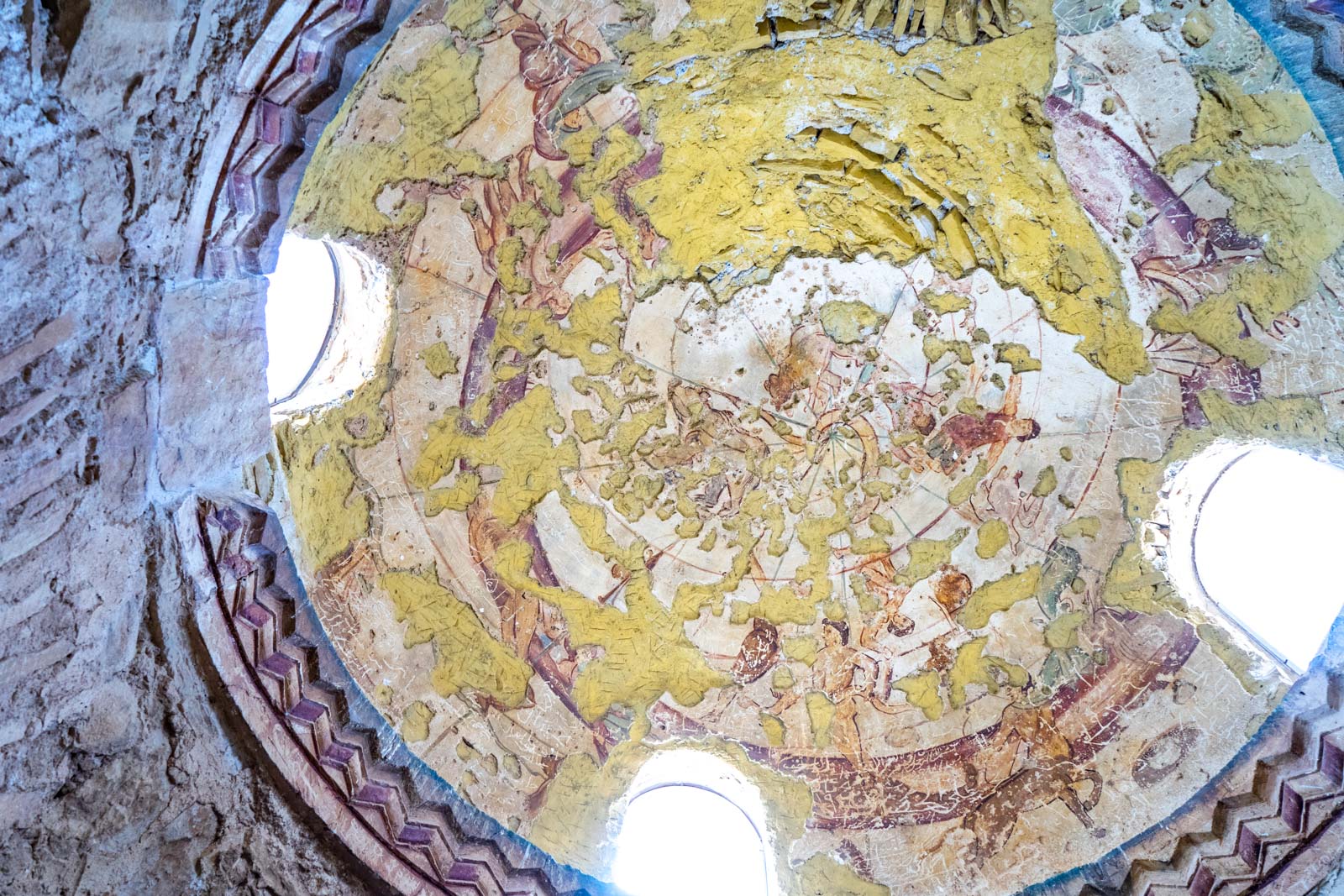 When the inevitable request comes for a few dinar in exchange for the tour, I happily hand them over without question, too full of awe to remember that I had originally thought this was a trick.

Other desert castles in Jordan

I think Qasr Al-Kharanah is the most physically impressive of Jordan’s desert castles and Qasr Amra is the most significant. If you are just looking for a half-day trip to see the castles, I would recommend these two.

There are a few other desert castles you can see if you have time. I have marked them on a map here.

As you can see, there’s a fair amount of driving involved if you want to get to all of the desert castles of Jordan. Just be thankful they’re all within driving distance, though. That makes them very close, compared to the size of the caliphate from which they come. 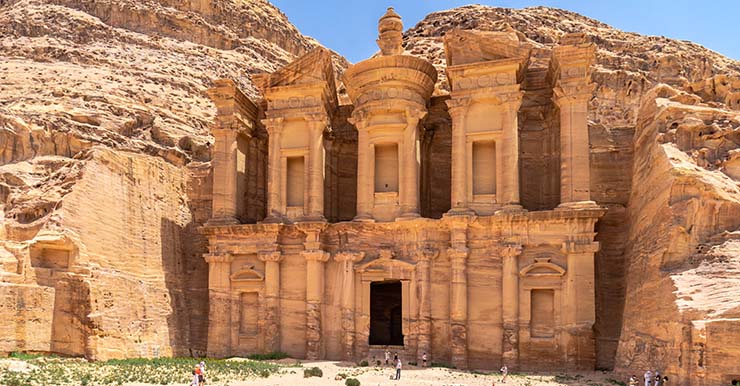 WANT TO KNOW MORE ABOUT JORDAN?

To help you plan your trip to Jordan:

I would recommend taking a tour of Jordan, rather than organising everything on your own. It’s also a nice way to have company if you are travelling solo.

I am a ‘Wanderer’ with G Adventures and they have great tours of Jordan.