The Summer Palace at Bang Pa-In makes a great day trip from Bangkok. But behind the beautiful buildings and gardens, there’s a tale of tragedy.

It would be nice to have a Thai summer palace you could head to when the days got hot, wouldn’t it?

You know, you could jump on a royal barge, float down the river to your tranquil holiday home and then spend the days walking around the compound, reading by the lake and entertaining guests from across the country. 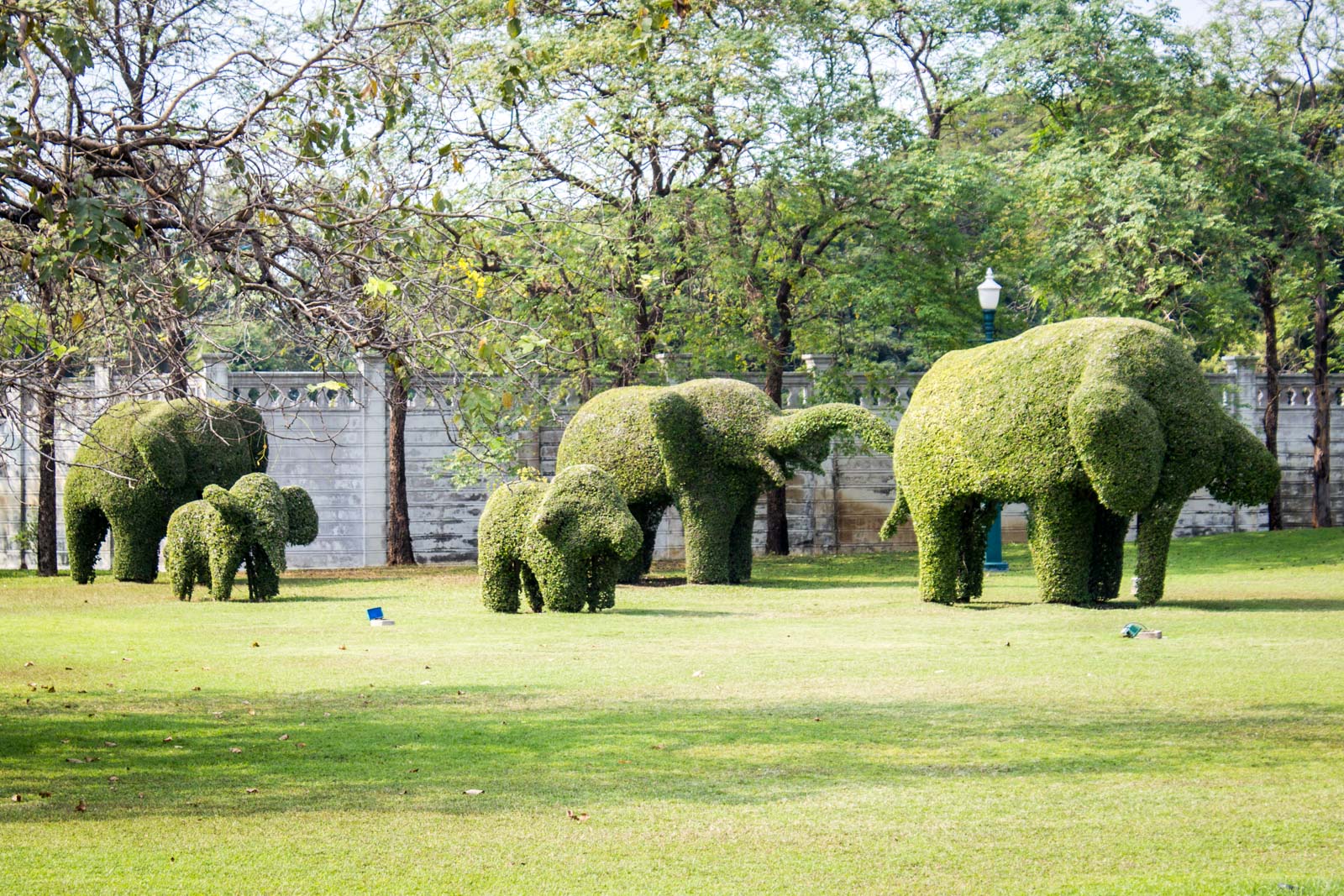 Well, it does sound nice. Unless you’re Queen Sunanda Kumariratana and Princess Karnabhirn Bejraratana who died on their way there!

The year was 1880 and on the way to the Summer Palace at Bang Pa-in their raft capsized. Back then it was punishable by death to touch a member of the royal family so everyone was scared to help them.

As it turned out, a member of staff actually instructed everybody to not touch them… and so the queen and the princess sunk to the bottom of the river in front of all those pairs of terrified eyes and helpless limbs. 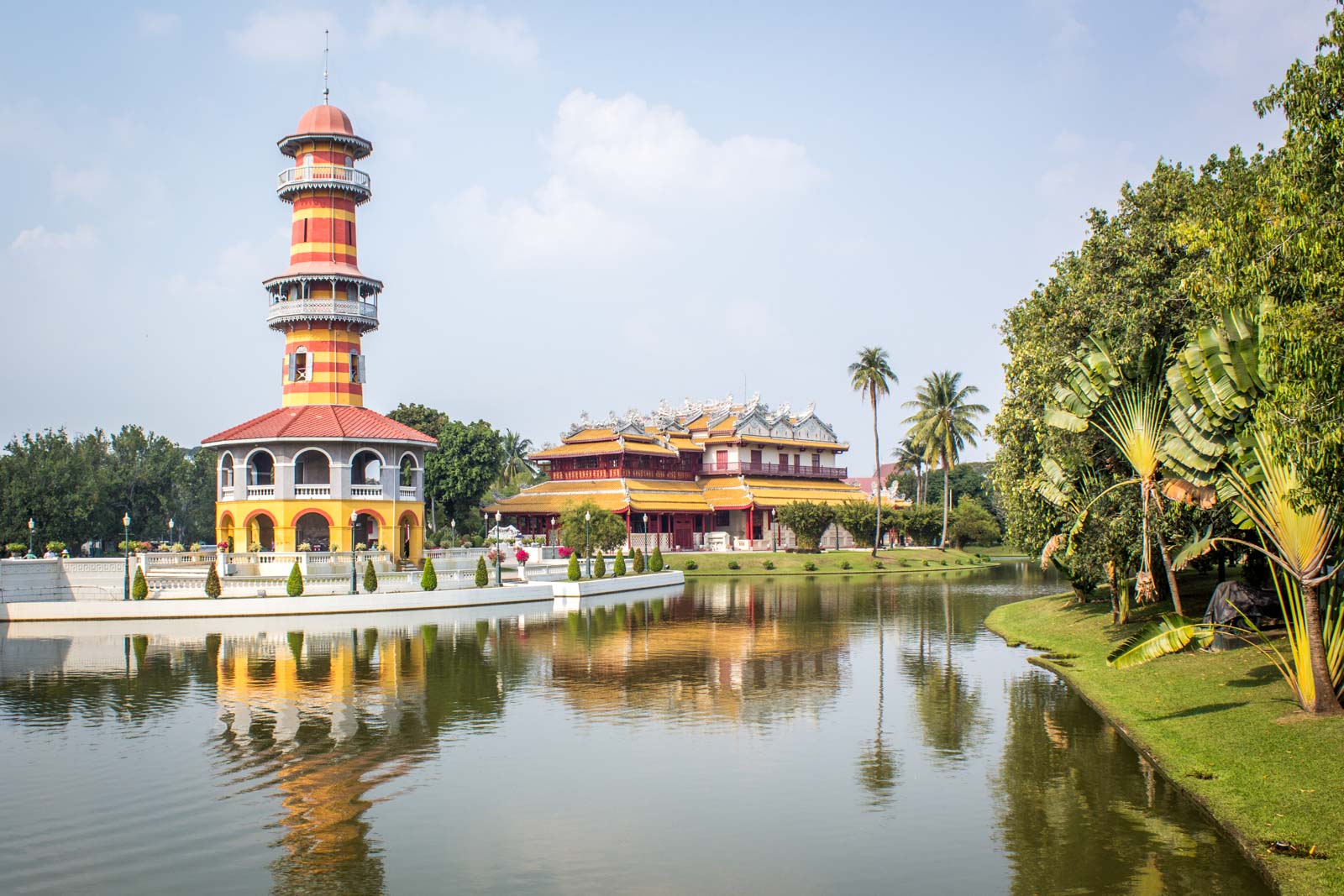 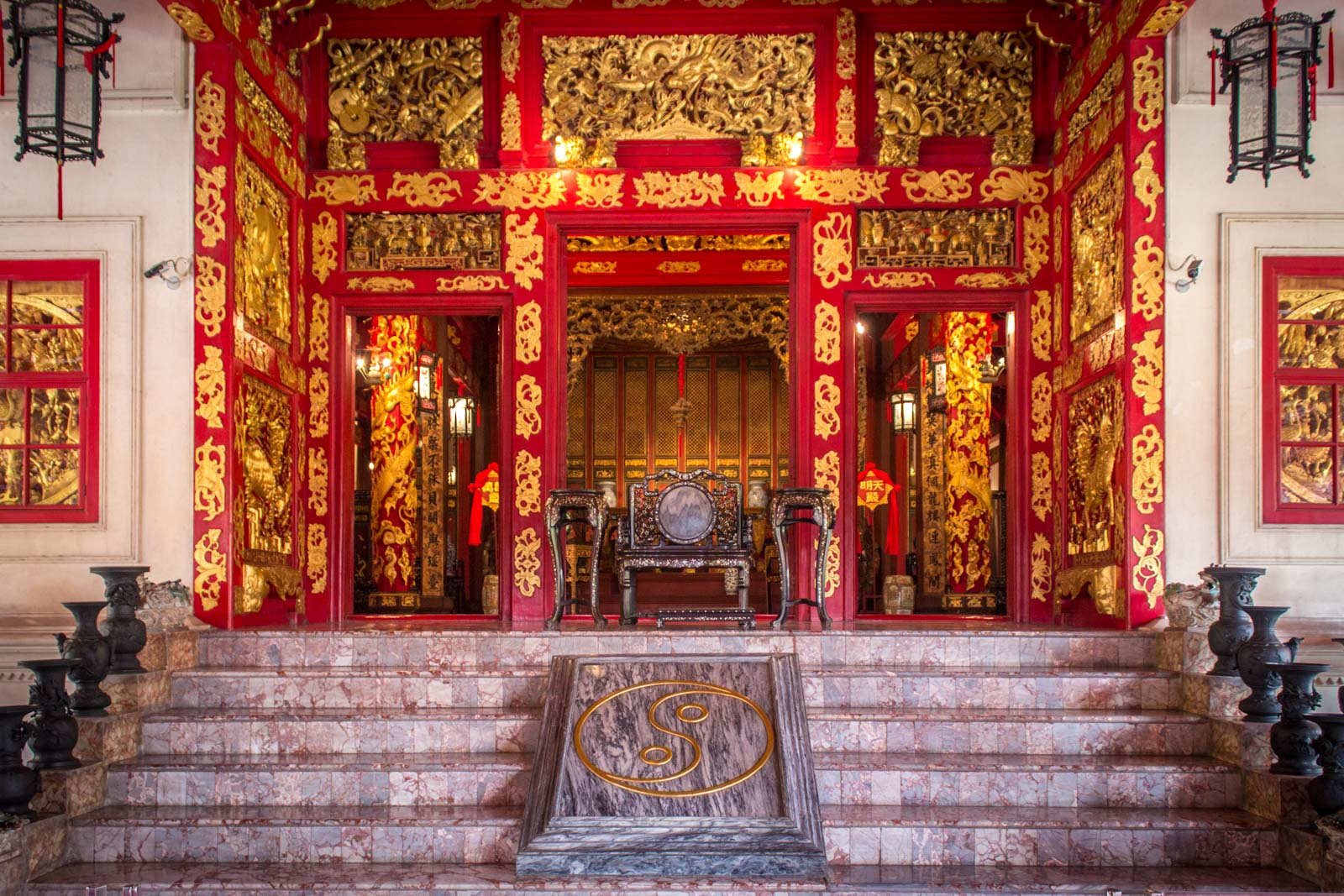 The staff member got jail time, courtesy of King Chulalongkorn, and his wife and daughter got memorials at the Bang Pa-in Summer Palace. They’re tucked away in a garden on one side, but are worth a look. 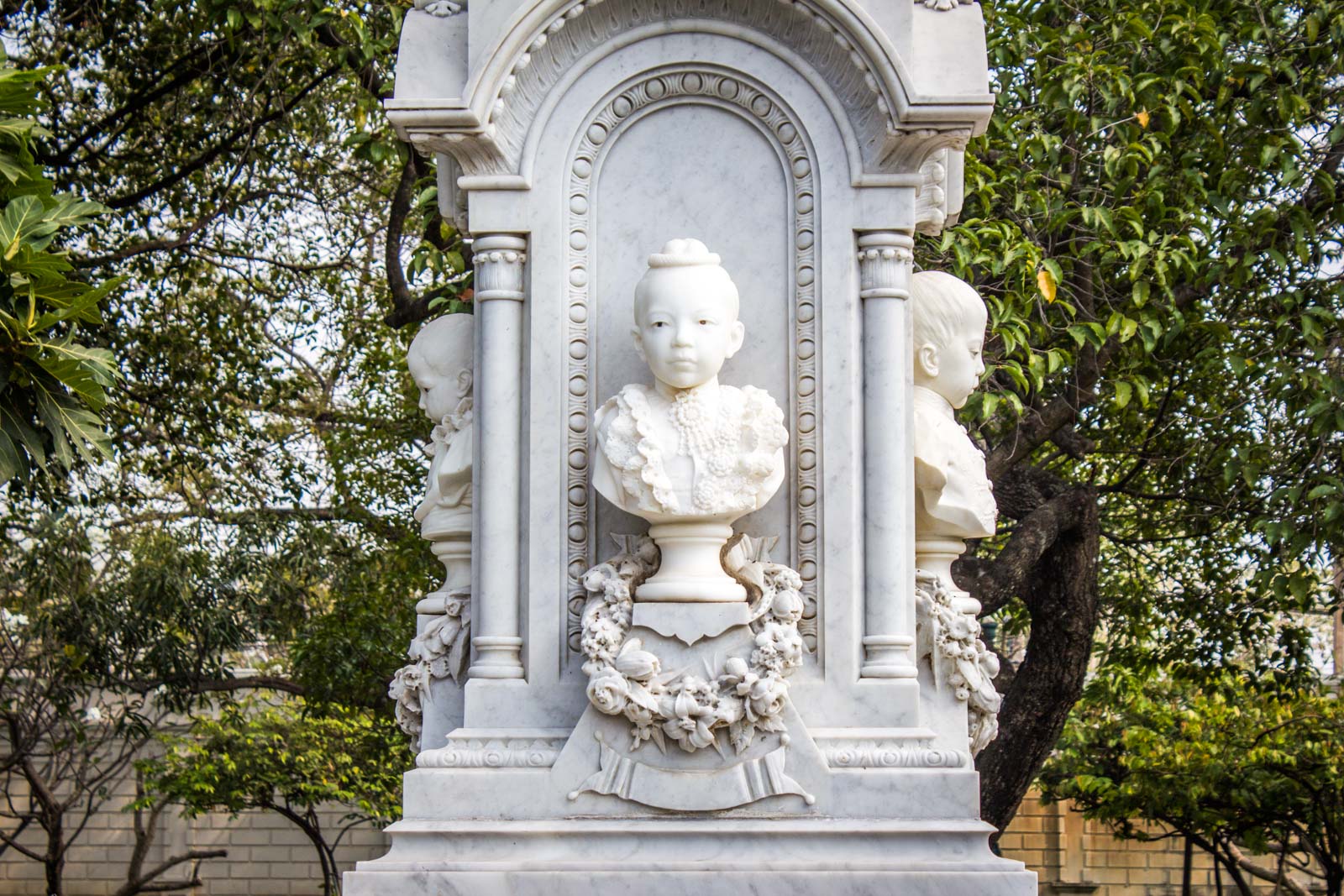 The whole palace is, in fact, worth a visit. It’s about two hours north of Bangkok and just 20 minutes south of Ayutthaya. It spreads out over a huge area that is filled mainly with grassy lawns and massive water features. Little canals run through most of the compound, connecting to the river alongside it. 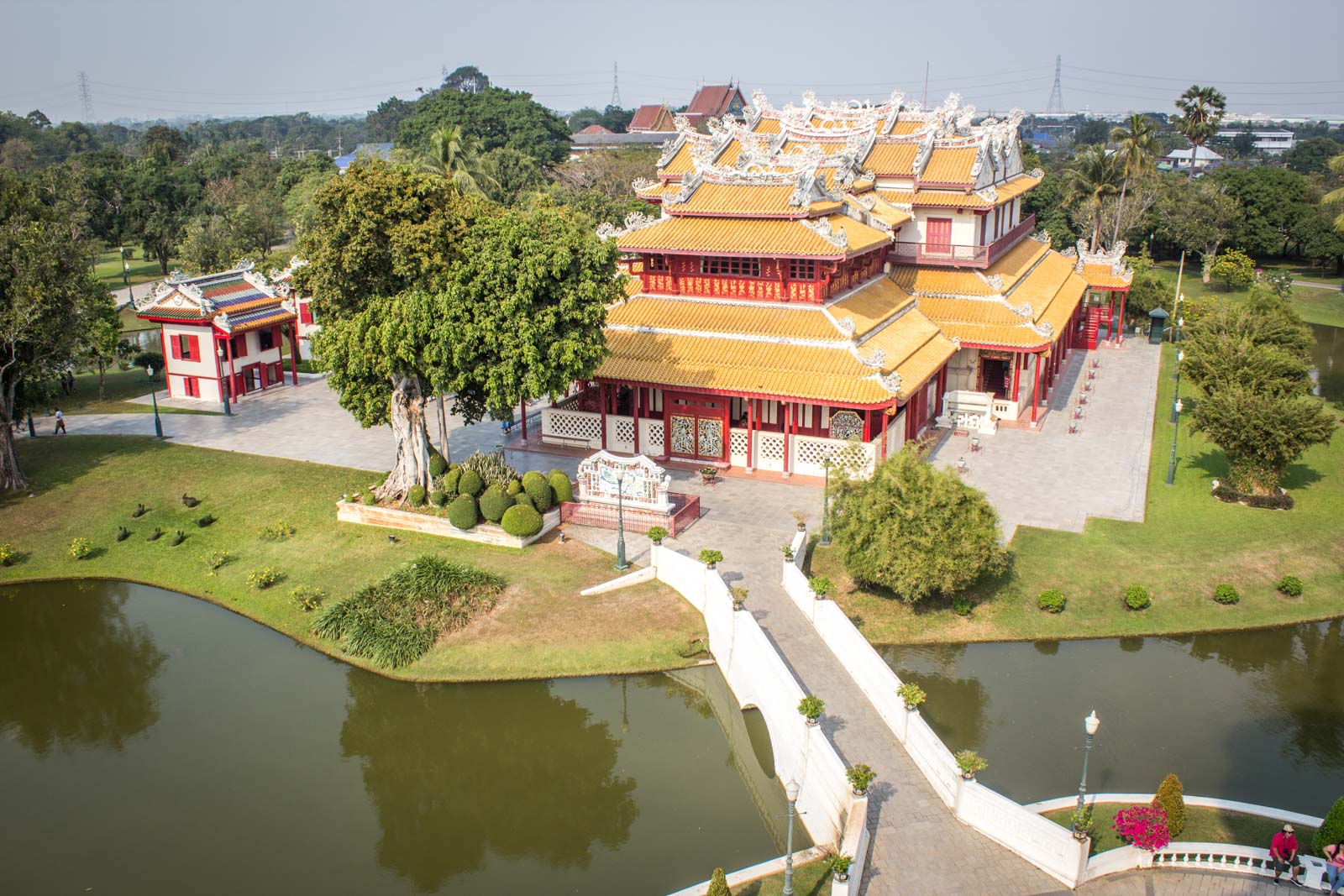 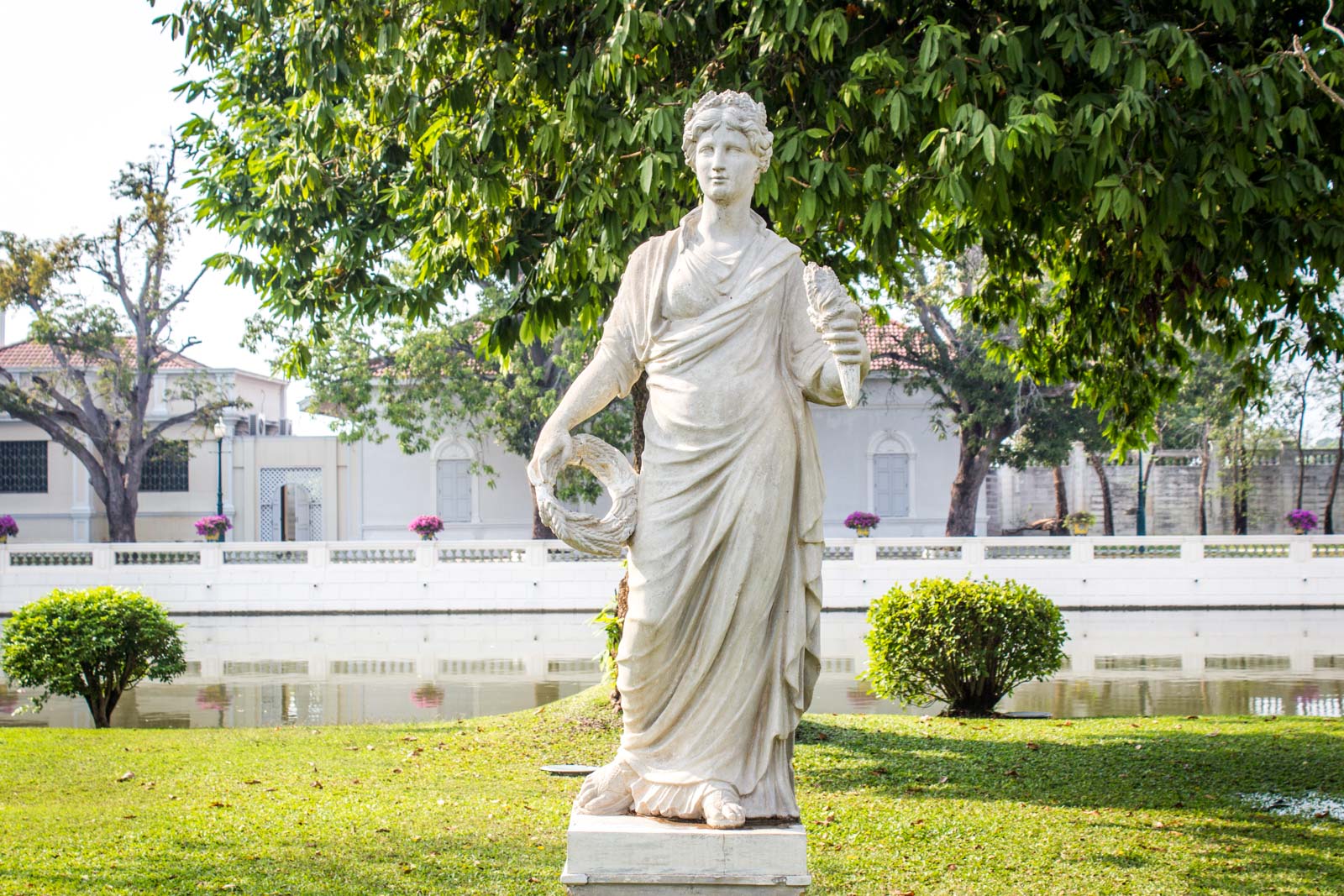 The buildings throughout the palace are interesting for their diversity. There’s a Chinese-style royal palace, a colourfully-painted lookout tower, and the traditional but simple Thai style of architecture for the smaller residences.

But what’s really noticeable are the European influences. Those cherubs did not grow up in Thailand! 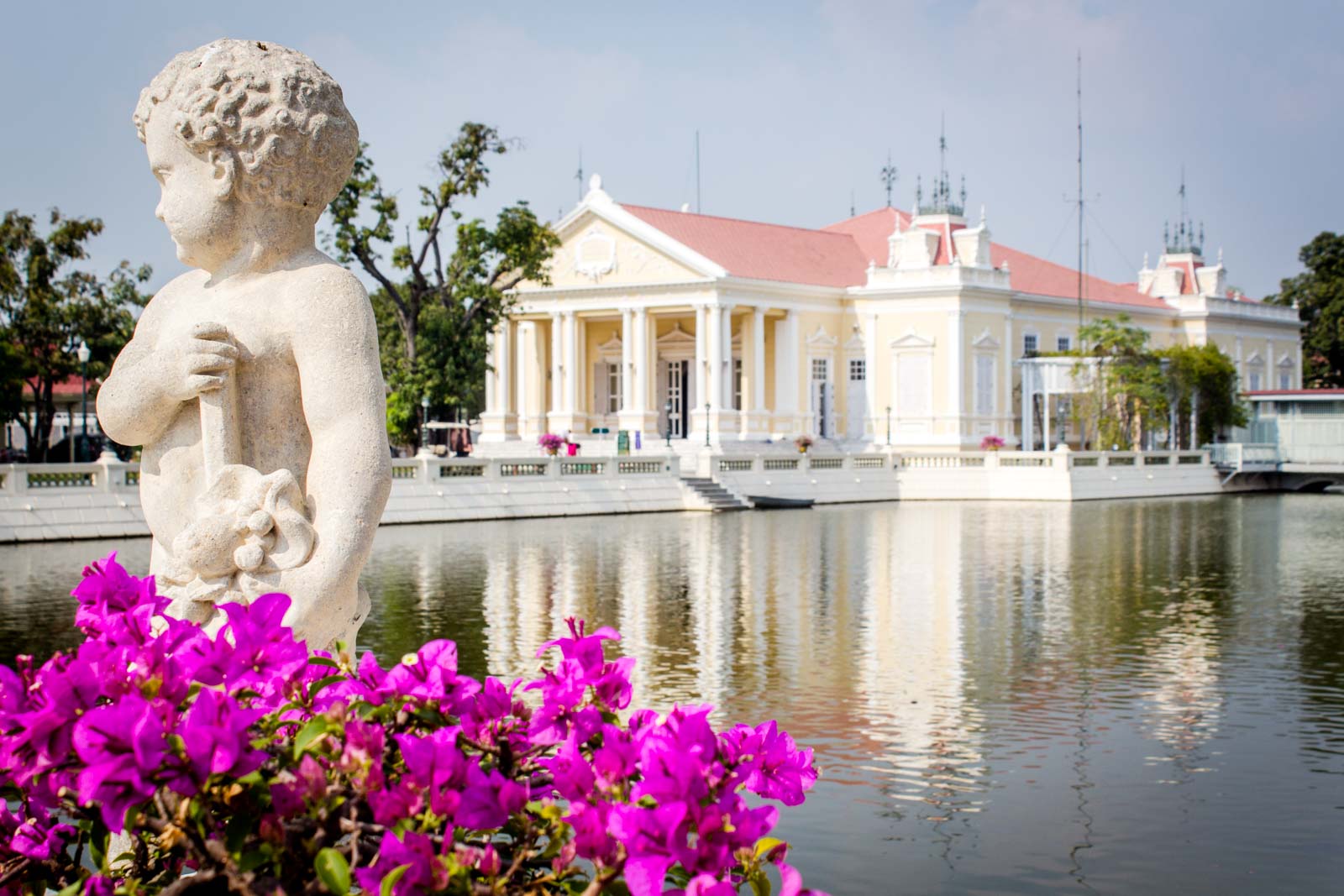 Bang Pa-in Palace was renovated in the late nineteenth century by the then King Chulalongkorn (Rama V). He was clearly inspired by some of the architecture and styles of the great palaces in countries like England and France.

As the complex was restored, they were incorporated into some parts. It explains the statues that look like they belong in Versailles and the buildings which could have a game of croquet taking place on the lawn in front of them. 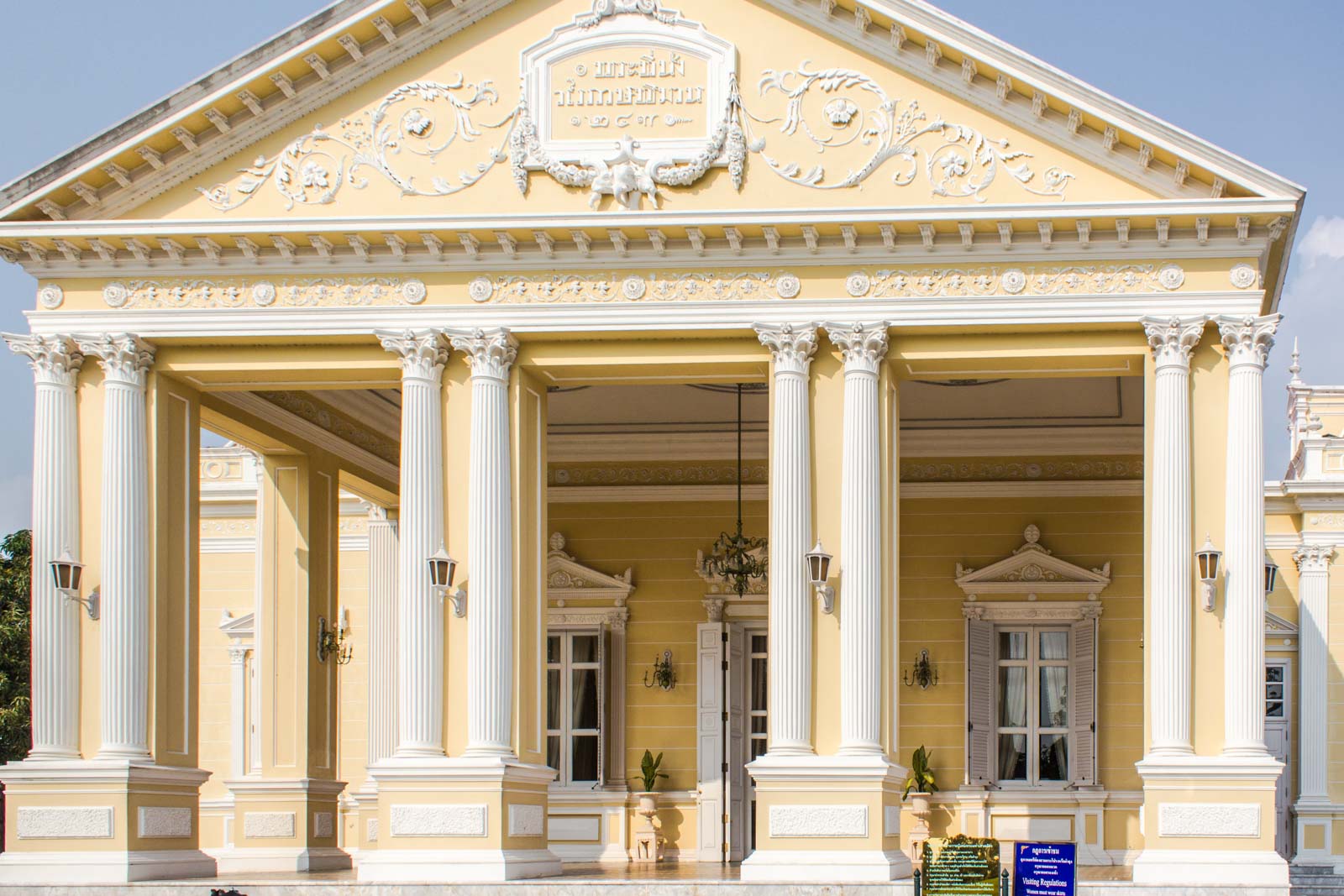 These days the palace is very rarely used by the royal family – only for occasional banquets or special occasions. It has been left for the tourists (and there aren’t that many) to enjoy as their own little wonderland. It is still immaculately maintained and is fitting as any royal residence. 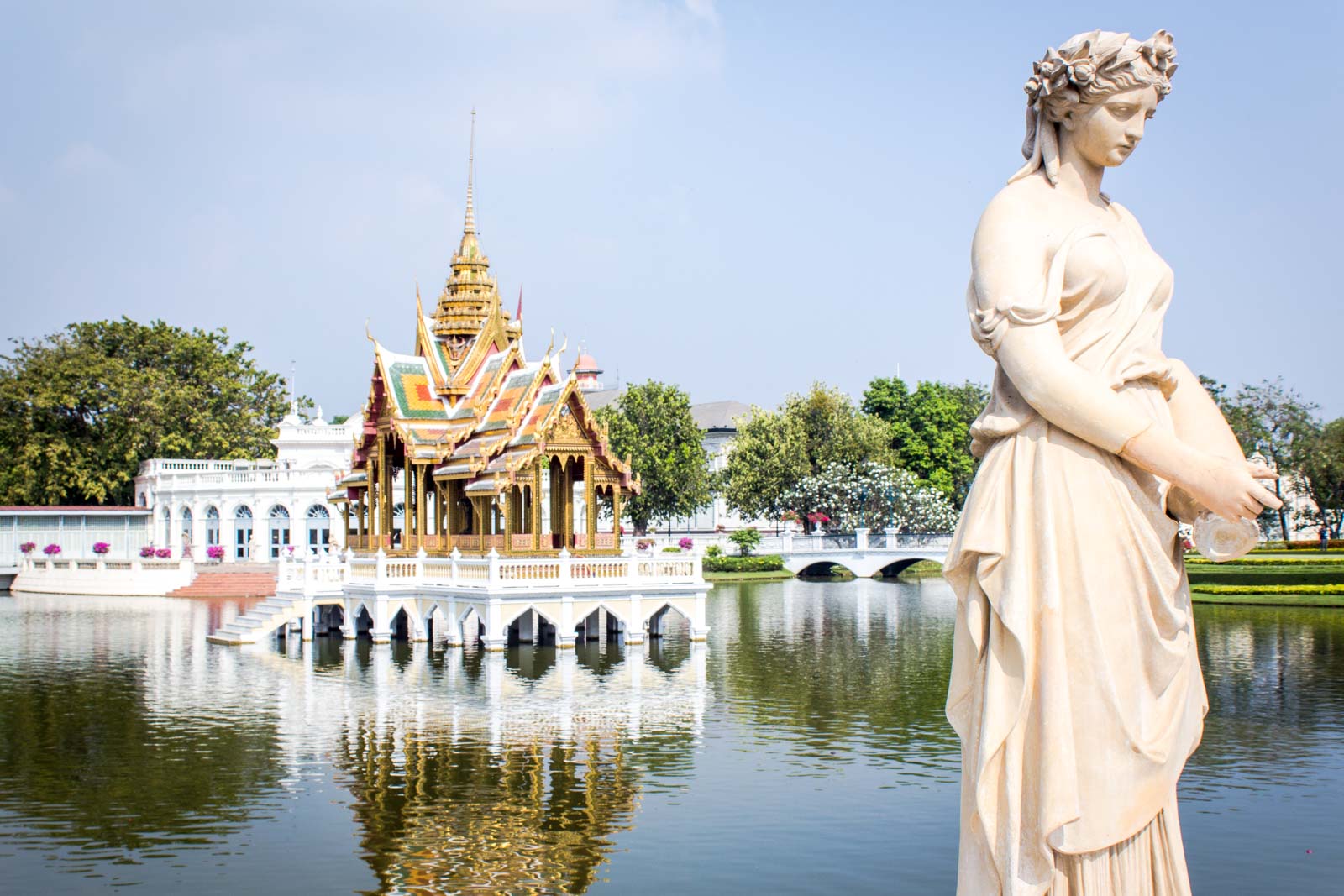 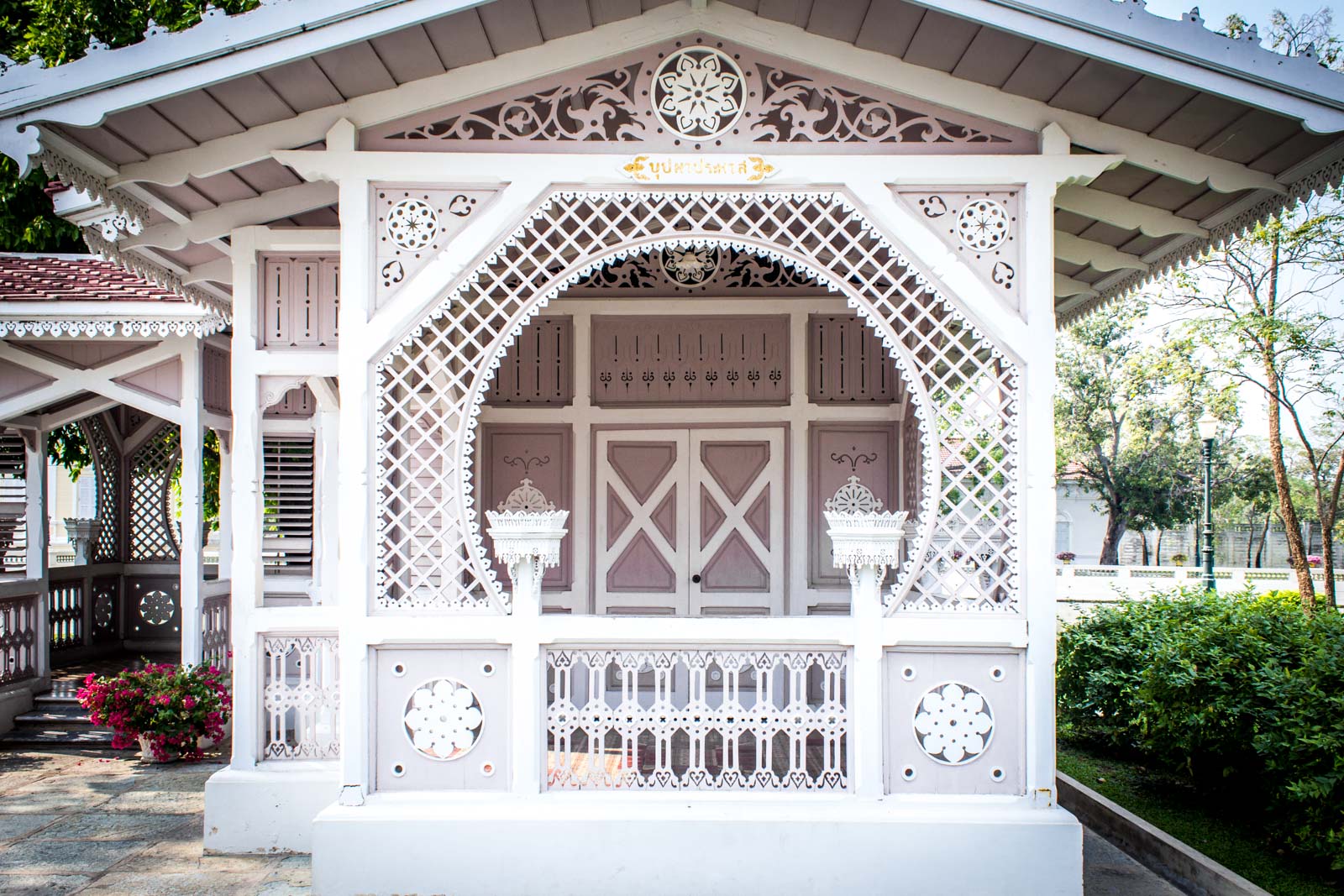 To visit it feels like stepping inside a capsule, insulated from the madness of the countryside around it. Bang Pa-in is a tiny town in comparison to much of Thailand but there’s still the manic pace and the sensory overload. Inside the walls of the summer palace, all that dissolves and you’re left in tranquility.

If you would like to visit Bang Pa-In with a guide, most of the tours from Bangkok are combined with a trip to Ayutthaya. I would recommend these ones:

If you would like to travel independently to Bang Pa-In, then I hope you find this information helpful.

Bang Pa-In Palace is about 60 kilometres due north of Bangkok. The official address is Tambon Ban Len, Amphoe Bang Pa-in
Chang Wat Phra Nakhon Si Ayutthaya 13160 Thailand. You can see it on a map here.
The easiest way to get to Bang Pa-In from Bangkok is by train. There are regular departures from the main train station in Bangkok and the trip takes about 90 minutes. It costs ฿12 (US$0.40) for third class and ฿54 (US$1.70) for first class. To see the timetable, you can check the State Railway of Thailand.
Bang Pa-In Palace is open every day from 08:00 - 16:00.
For foreigners, a ticket costs ฿100 (US$3.20). The entrance is ฿30 (US$0.95) for Thai nationals.