It was the crocodiles that really worried me, going in.

This abandoned water park of edge of the Vietnamese city of Hue intrigued me as soon as I heard about it. The process of finding it was a challenge I was ready for, the idea of exploring it was fascinating, the potential of an illicit entrance was exciting.

But the stories I had read about there being live crocodiles inside? Well, that could go horribly wrong, couldn’t it? 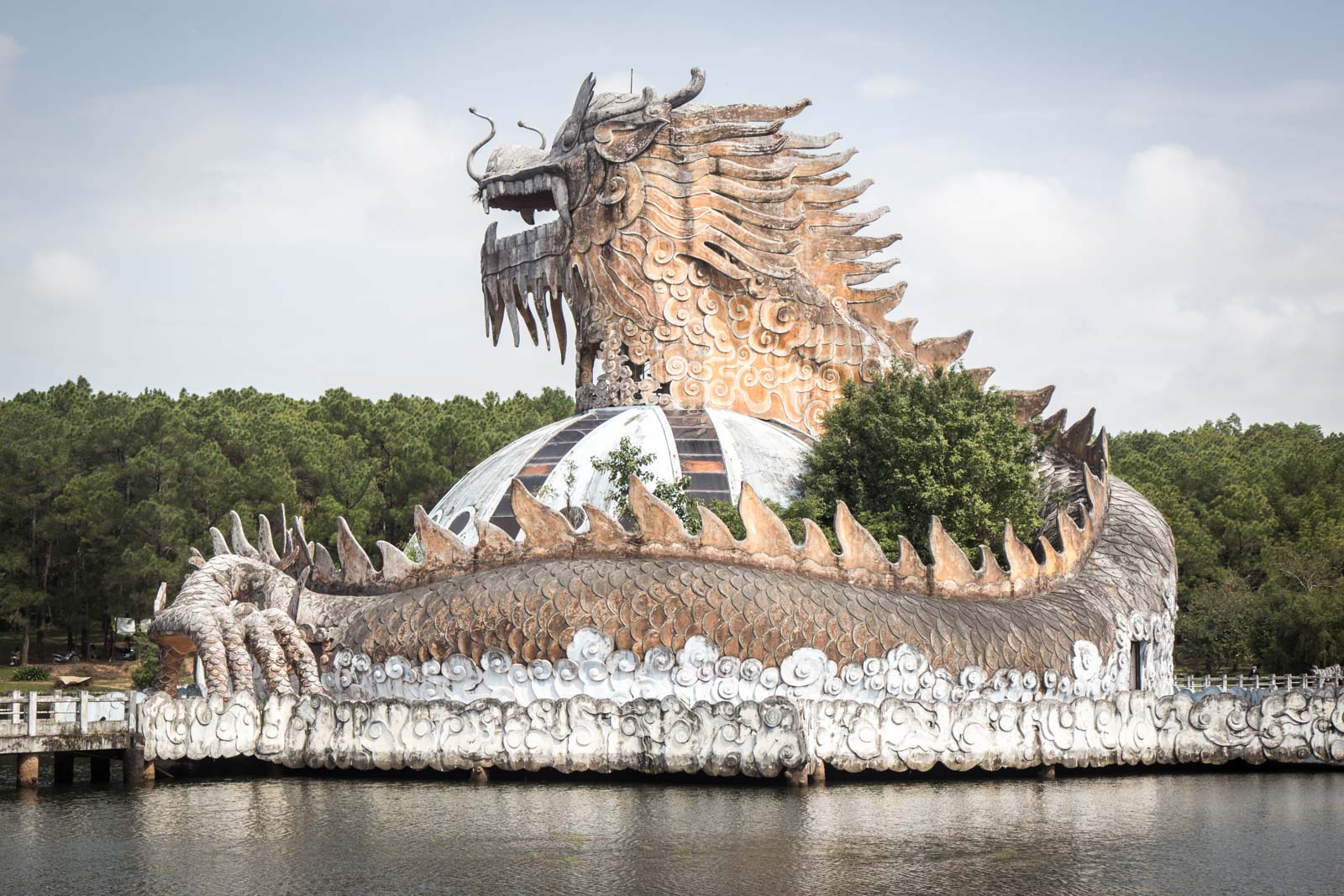 You may remember I story I wrote about the time I broke into an abandoned theme park in Nara in Japan.

I imagined this experience might be the same – from all accounts, there were plenty of similarities. So I prepared myself for a bit of casual break and enter and set off early one morning in search of Ho Thuy Tien. 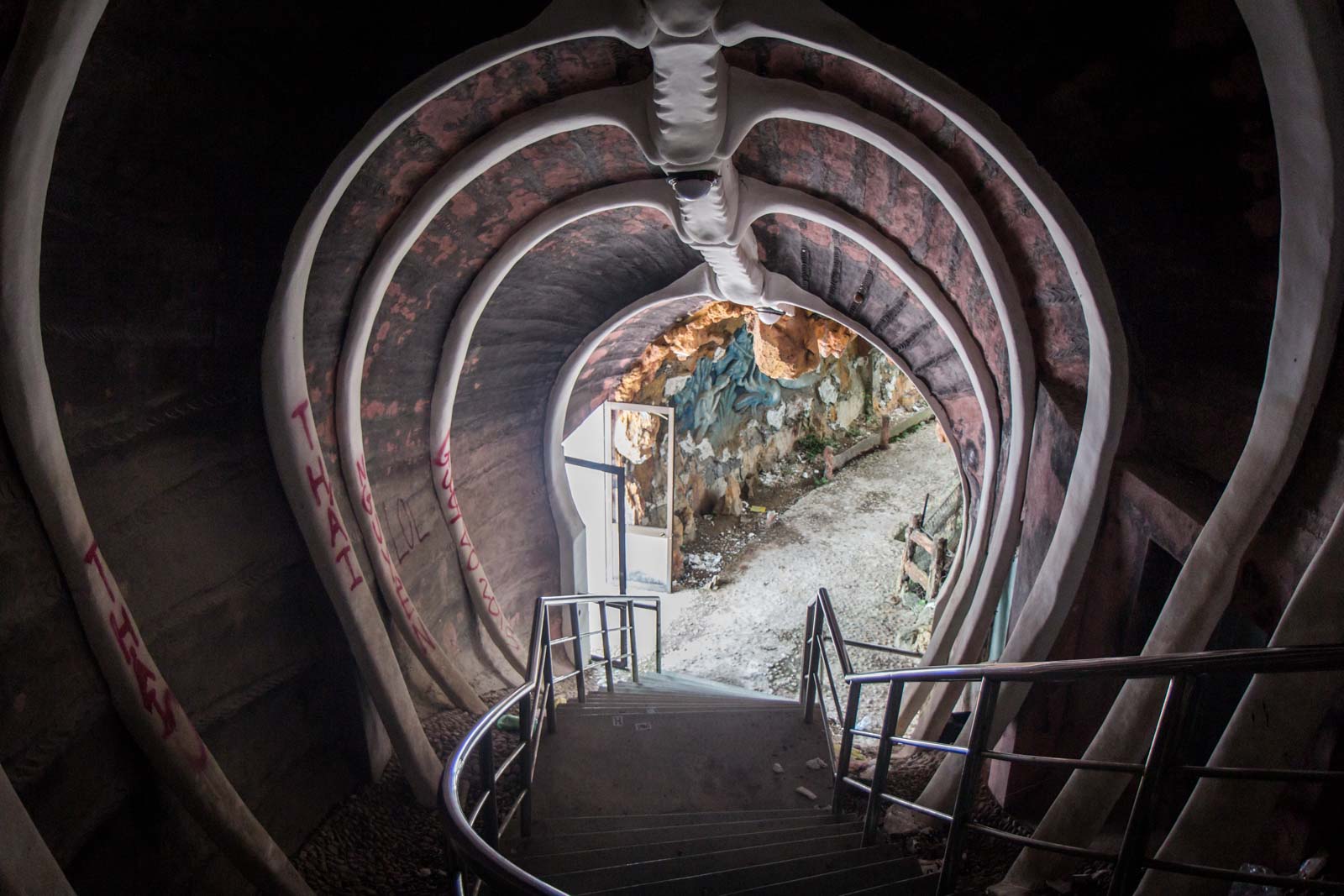 From what I had read, Ho Thuy Tien opened in 2004 and cost about three million US dollars to build. It closed not too long afterwards and everything that had been built on the site had just been left as it was. Abandoned.

The idea had been to create a family water park with amusement rides, slides, pools, shows and an aquarium. I’m not sure why that didn’t work out as planned. 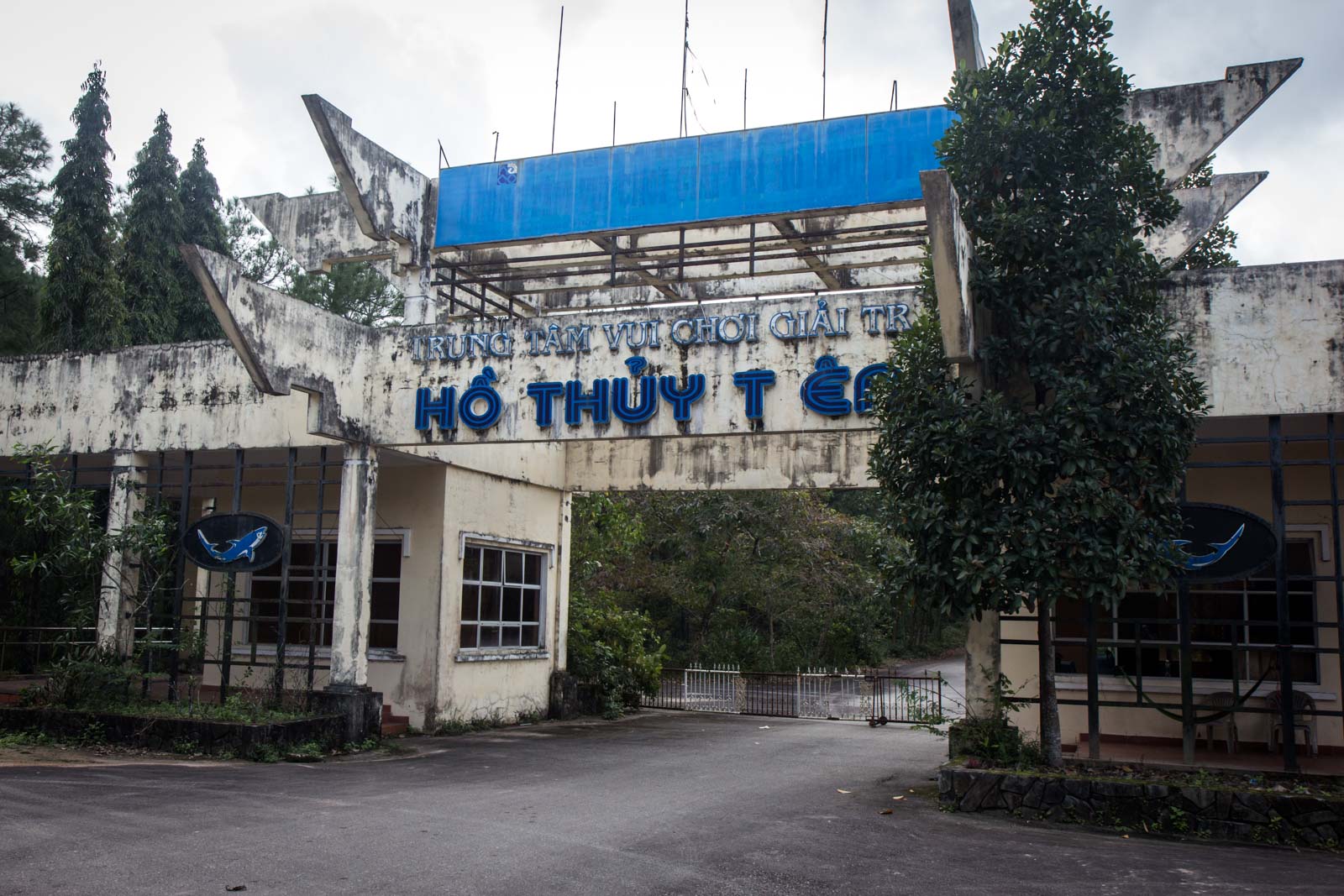 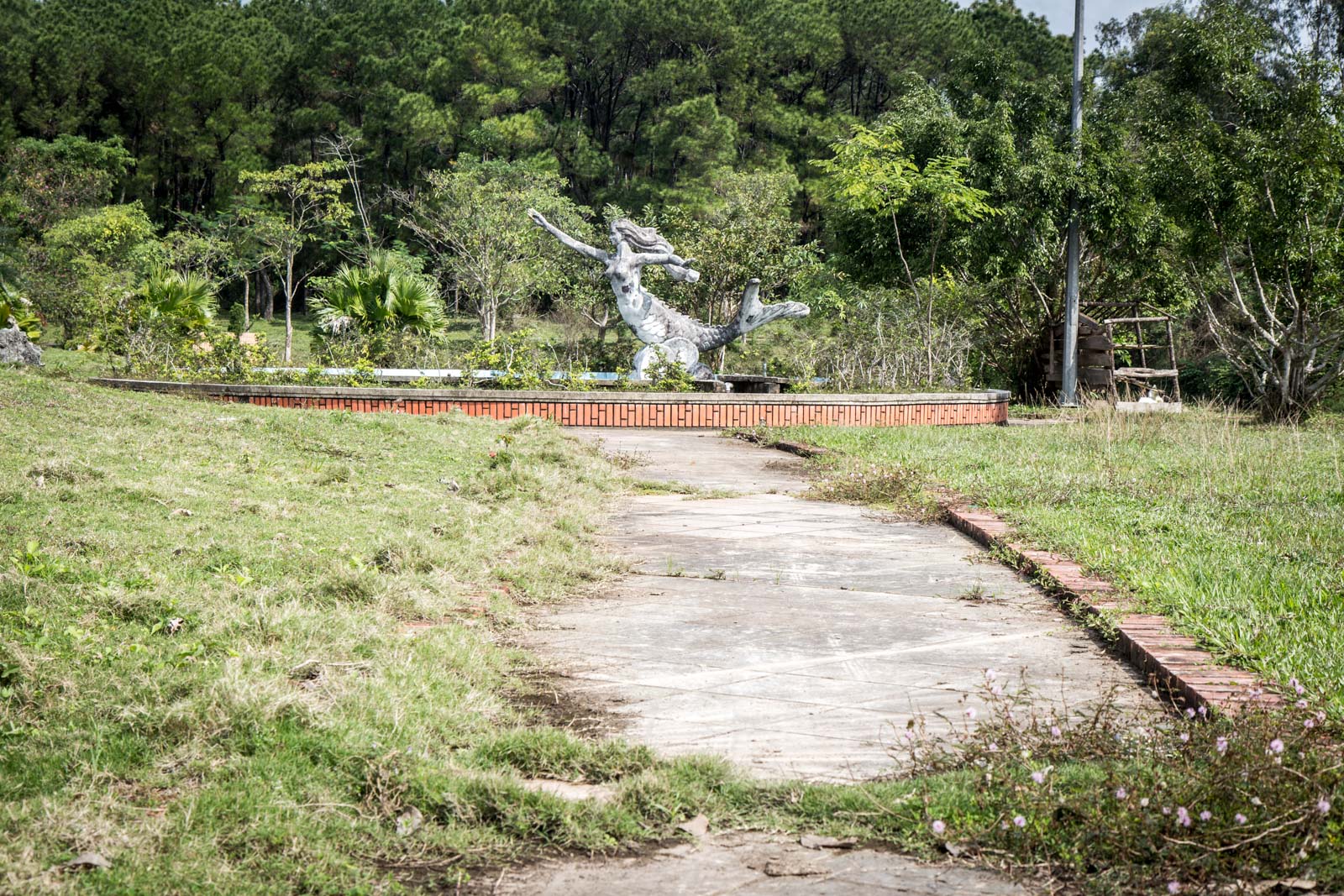 Now, I need to clear a few things up at this point. This abandoned water park has had a little bit of fame in the blogosphere recently, which is how I heard about it. The stories make it sound so intriguing.

Let me quote from a Huffington Post article, which says, “Because the abandoned waterpark is so cryptic, backpackers pass directions around on scrunched-up napkins, drop pins on Google Maps and show each other photos to get to the right place”.

This is the kind of thing that excited me. But when I put the name into Google Maps, it came up straight away. Not so much mystery. Certainly no need for scrunched-up napkins, which I feel may be a case of artistic licence more than a fact. 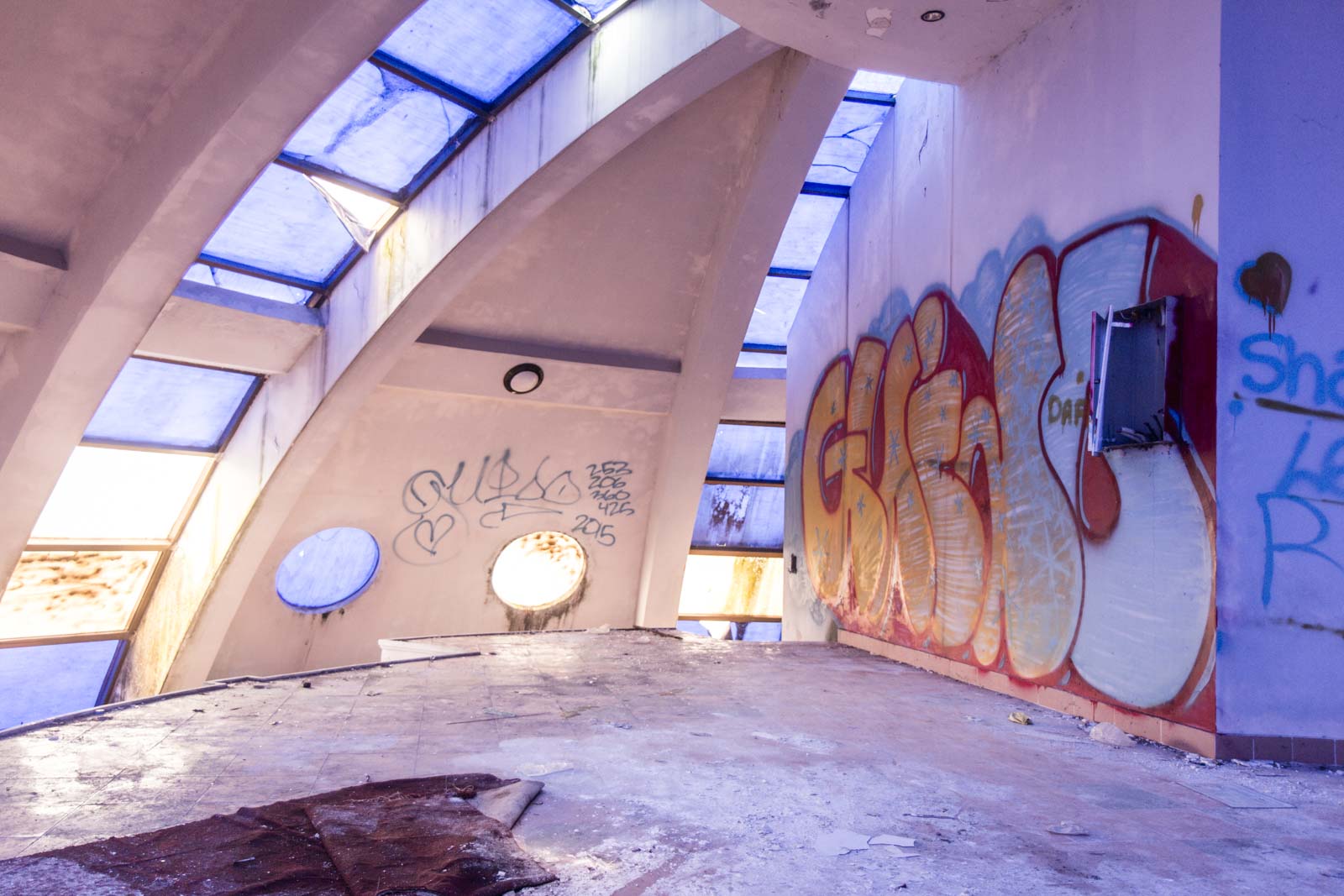 It turned out to be about eight kilometres from the tourist area of central Hue and I decided to walk there to get a bit of exercise. When I got to the entrance – which is clearly signposted – there was a man sitting there who smiled at me as I walked in.

My memories of scaling up fences and climbing through barbed wire at Nara Dreamland seemed quite a contrast.

Inside, I walked for a little while until I came to the main section with an enormous dragon in a lake. Here I found quite a few (as in, a couple of dozen) young Vietnamese people hanging around the lake’s edge. There was even a little makeshift stall selling drinks and a photoshoot for a wedding going on. 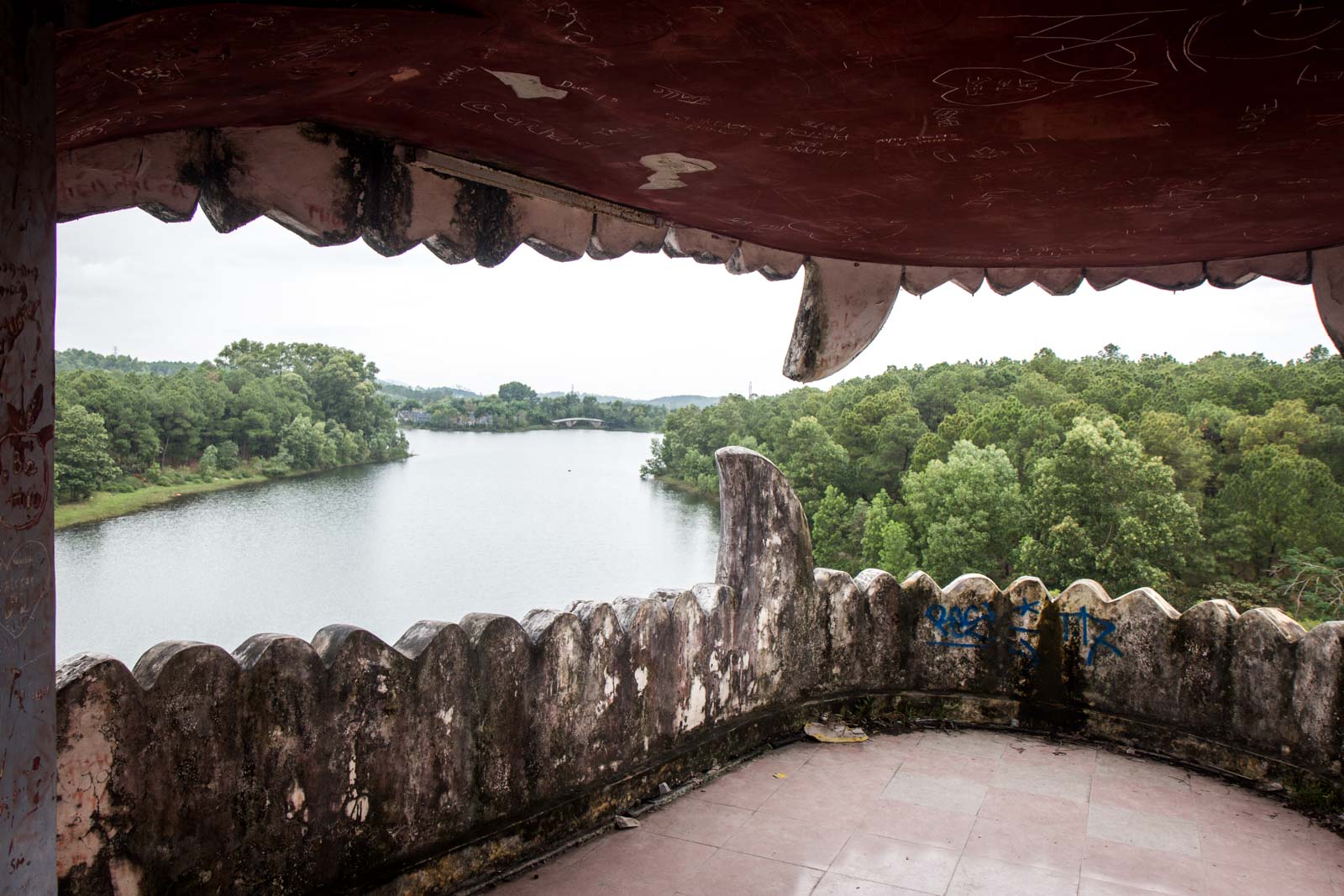 This was not quite the thrilling urbex experience I had pictured.

Perhaps my expectations had been coloured slightly by my previous explorations. Perhaps other blog articles had made it sound more adventurous than it actually is. Or perhaps recent notoriety has led to an increase in visitors.

Now, having said all of that, I was still not disappointed. Ho Thuy Tien is cool. Really cool. It is still an abandoned water park, with plenty of things to see in a semi-decaying state. And so I got stuck right into explorer mode. 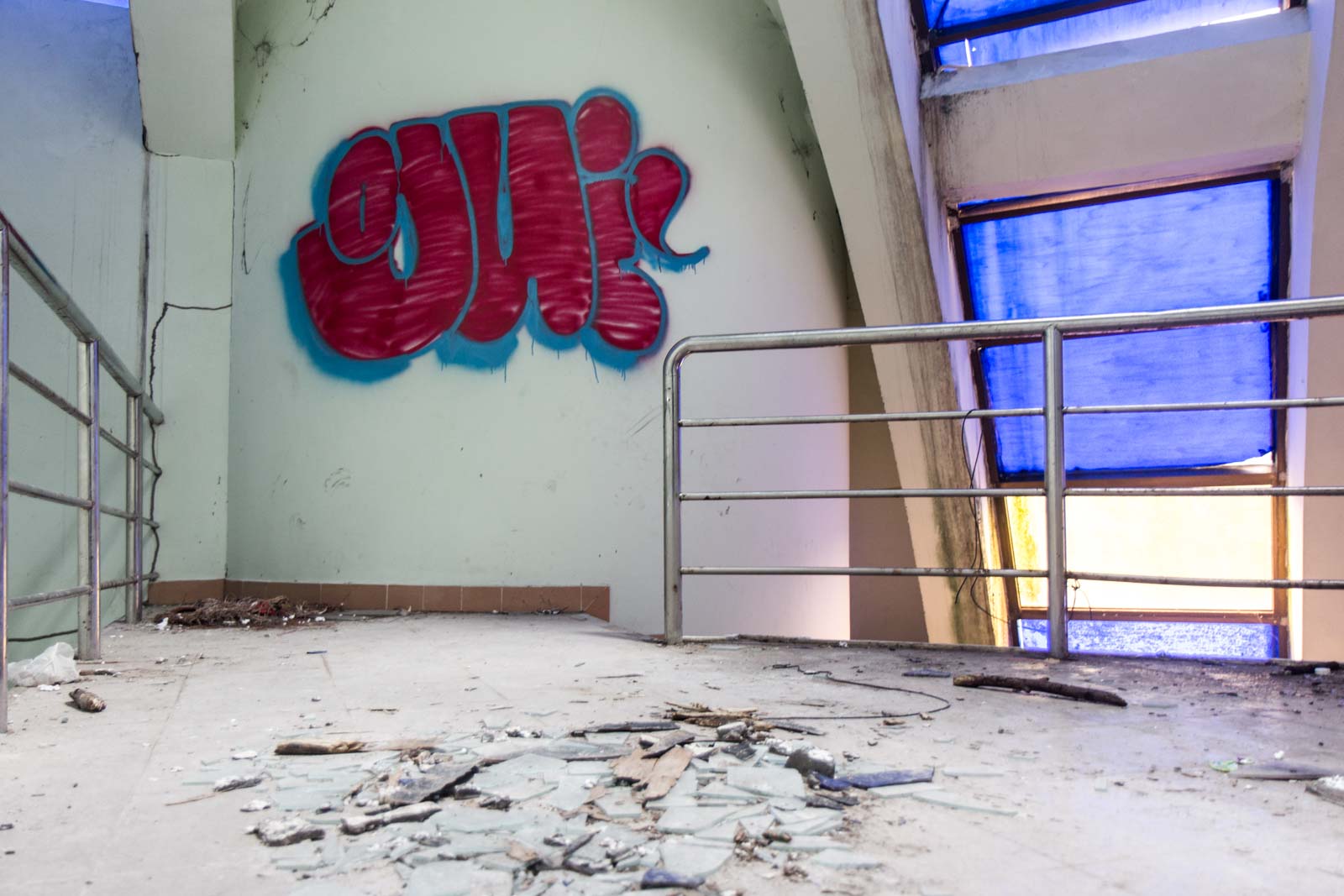 The main attraction is the aforementioned dragon, which rises out of the large lake the park is based around. You can go inside it and this is the highlight.

Empty rooms still have artefacts from the time of operation – I see a laminated menu of the ground, for instance.

You can climb right to the top into the jaws of the dragon and look out over the park; there’s an entrance passage with fake sharks and stingrays on the wall; and the tanks from the aquarium are still there, filled with water. 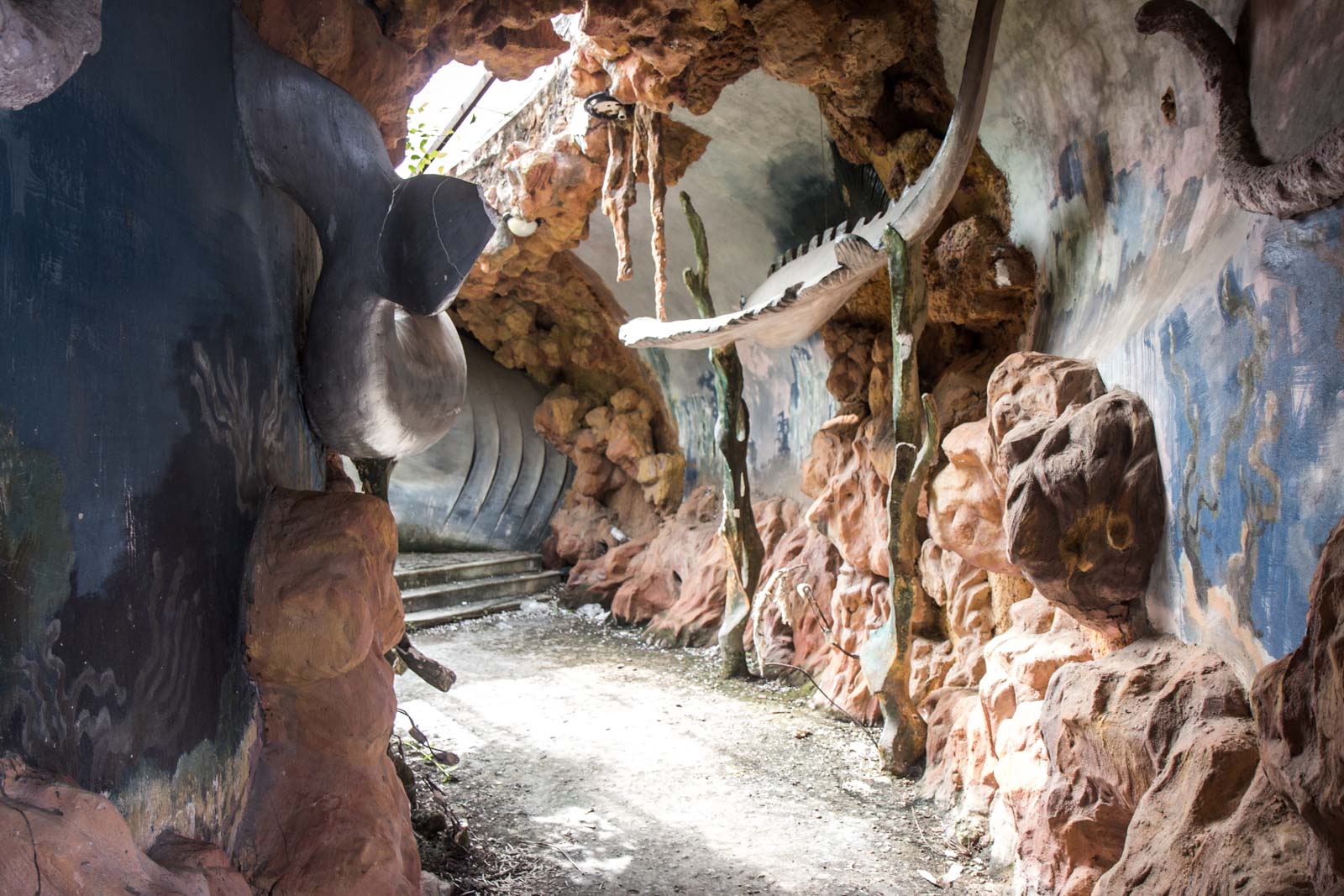 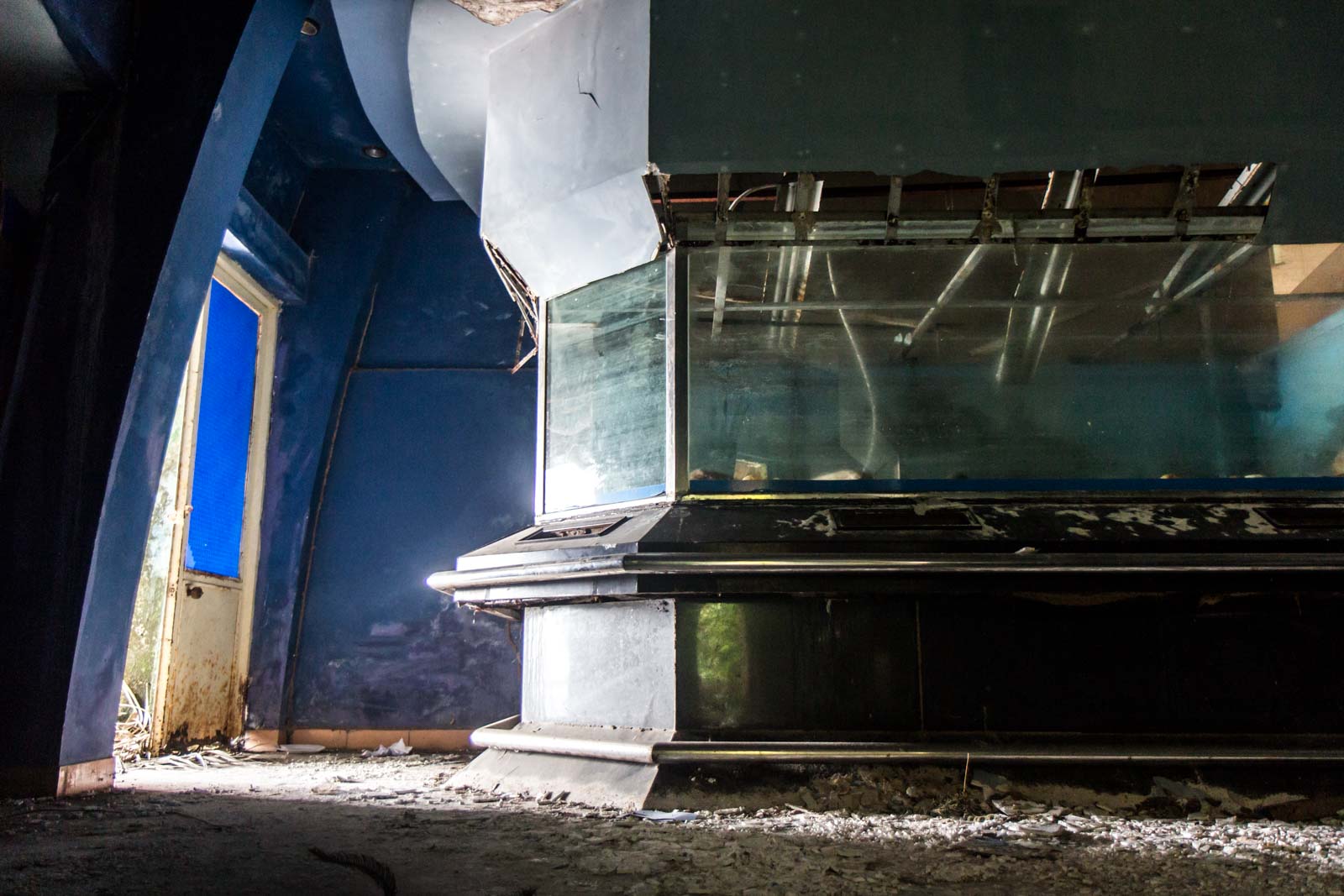 This is where the live crocodiles were supposed to be but apparently, after being confined with little food for years, they have now been rescued and moved to somewhere more humane.

It was a bit of a relief but, still, I refused to go too close to the lake’s edge the whole time… just in case. 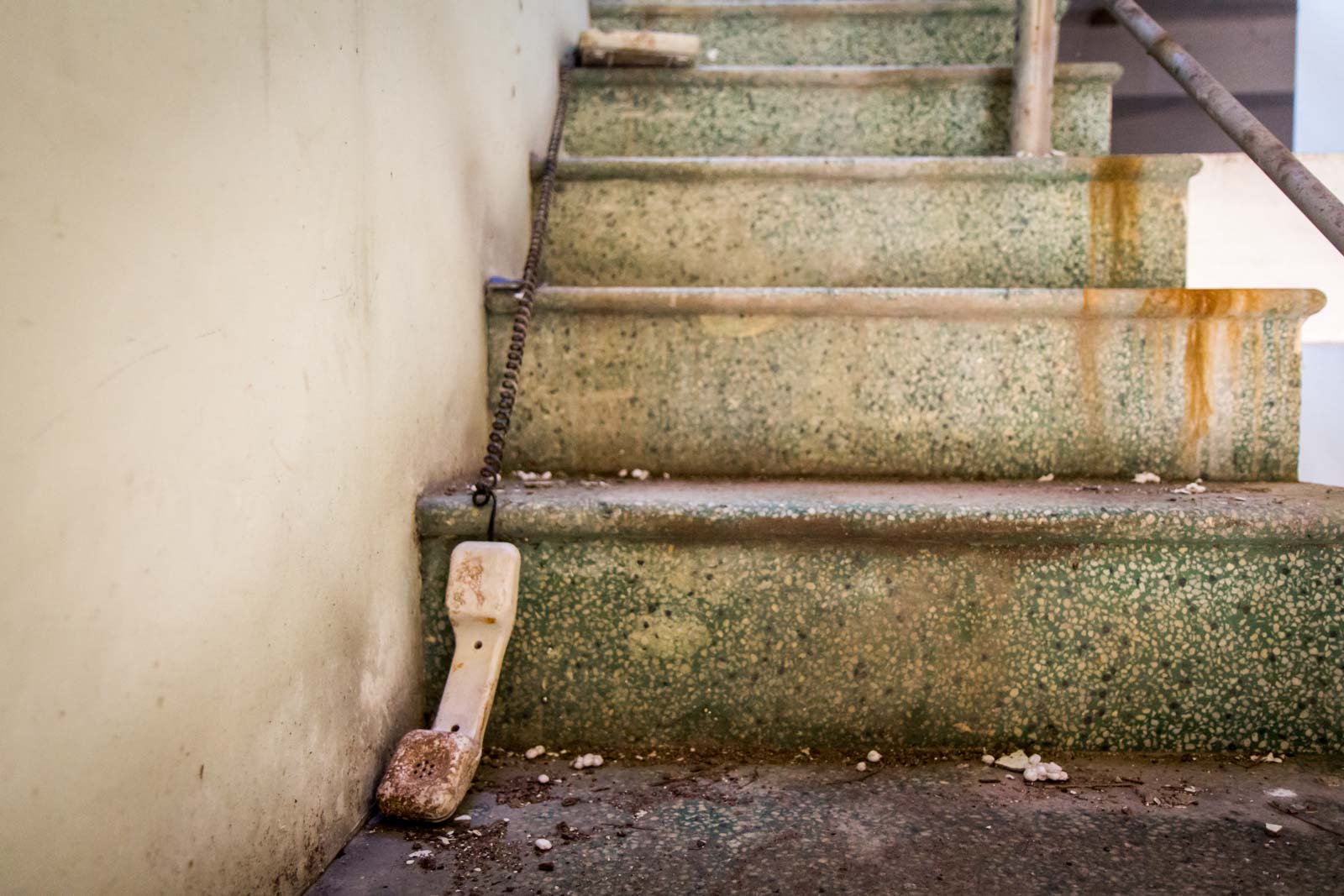 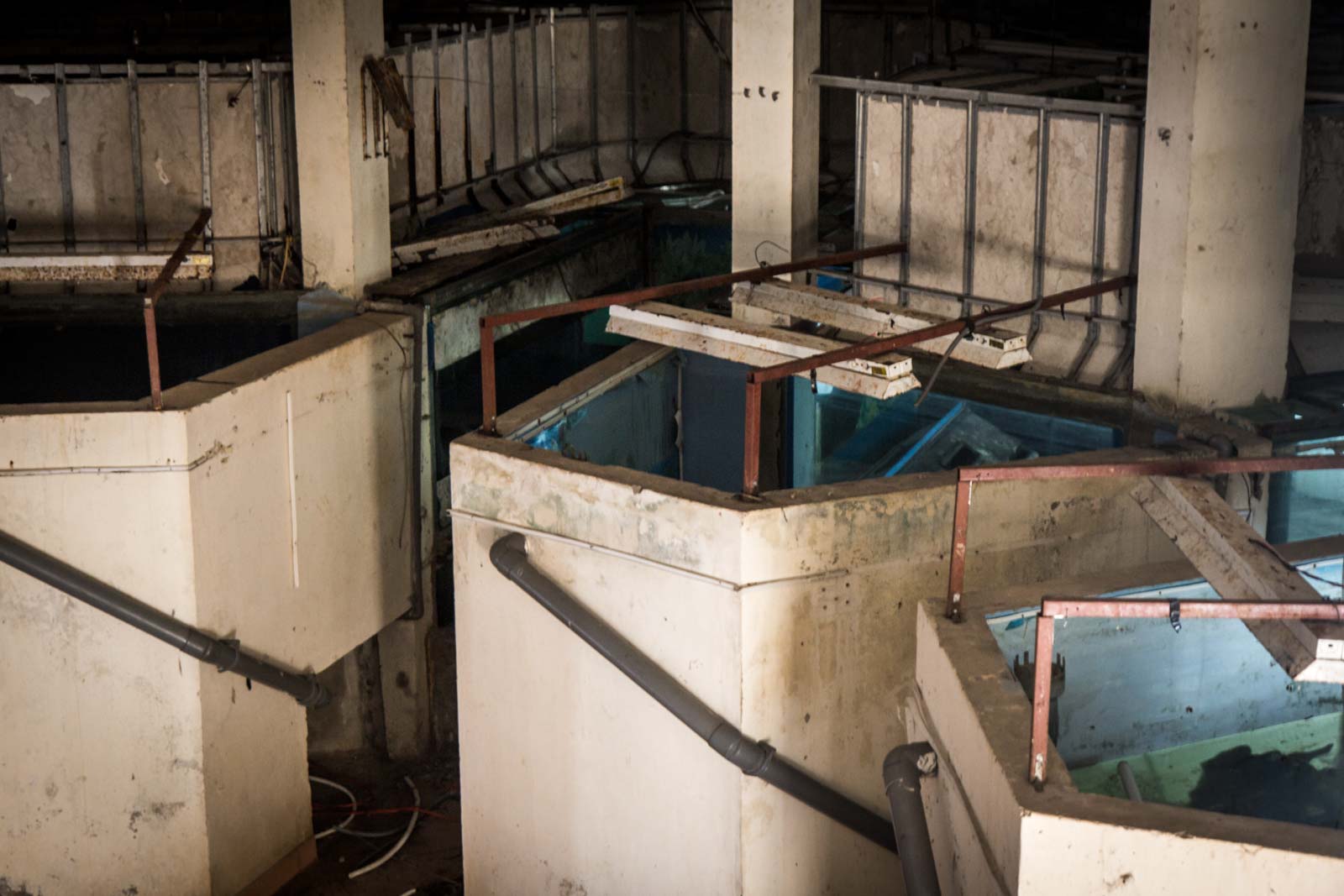 After spending about an hour taking a proper look at all the rooms, I started to walk through the rest of the park to see what I could find.

At first I noticed the deserted houses, derelict now, that had been built for guest accommodation. 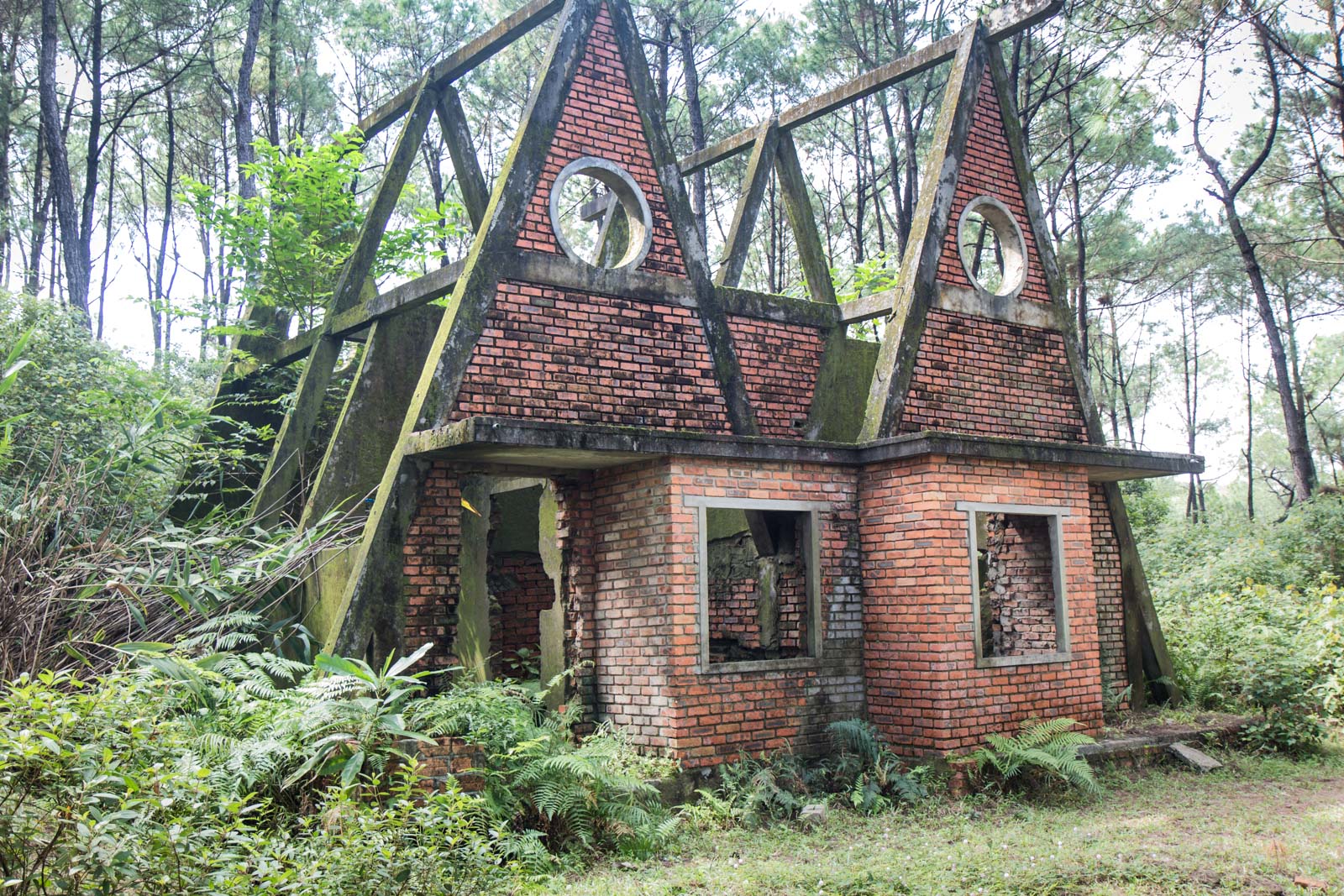 I found a small building that was where a flight simulator ride had once operated. I was amazed to see that it was still there, with a little room to the side that still had the computers that ran it.

And I found the amphitheatre with hundreds of seats where shows must have taken place. This was one of those post apocalyptic atmospheres, everything left just as it was, almost as though everyone had suddenly just run out of a performance as a disaster struck. It was eerie. 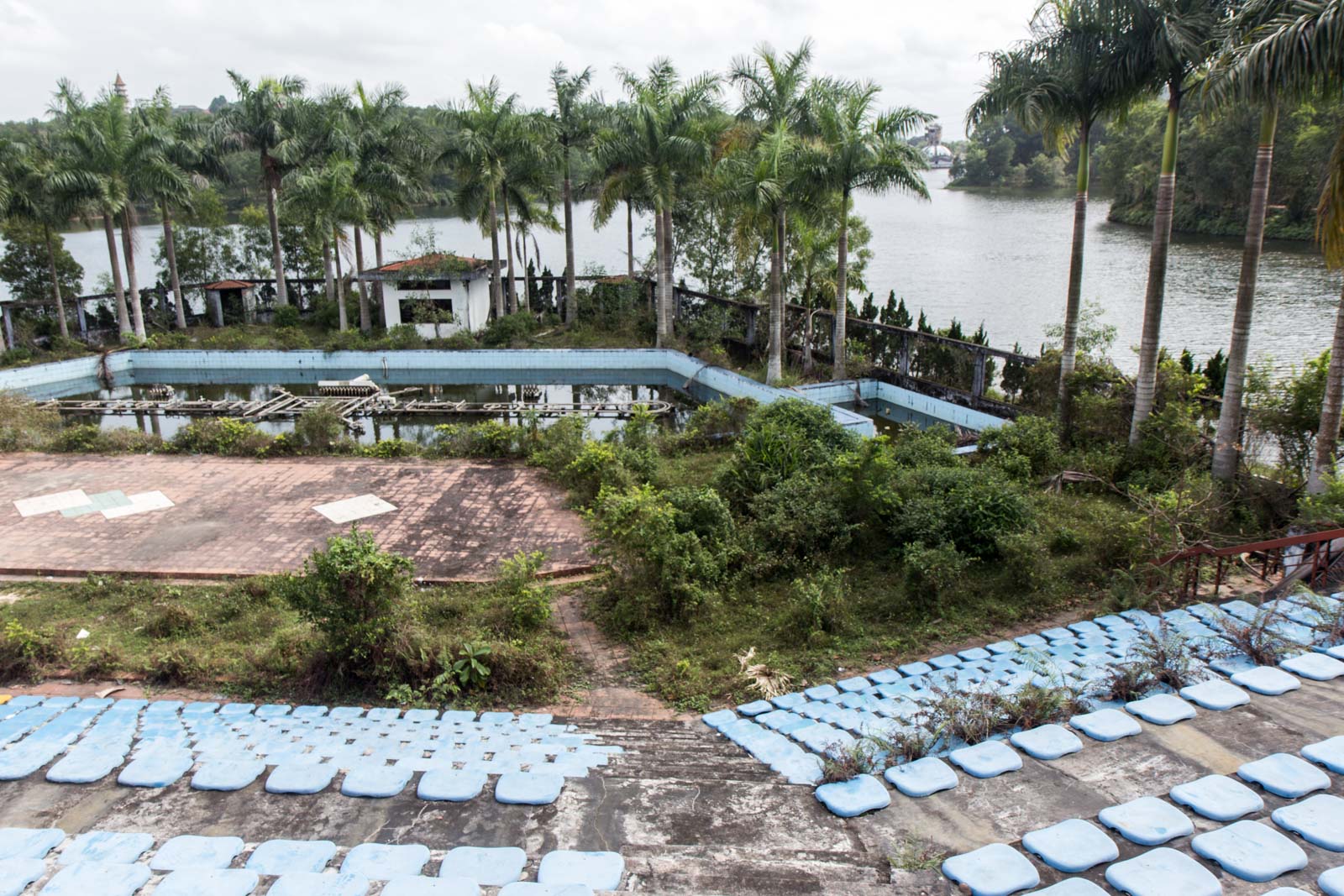 But probably the most interesting section was the waterslides. There are three slides still there, accessible with a set of stairs built around changing rooms. Fake wooden bridges lead to the pool where the riders would finish. Connected to this pool is an area designed for small kids, with cubby houses and a playground. 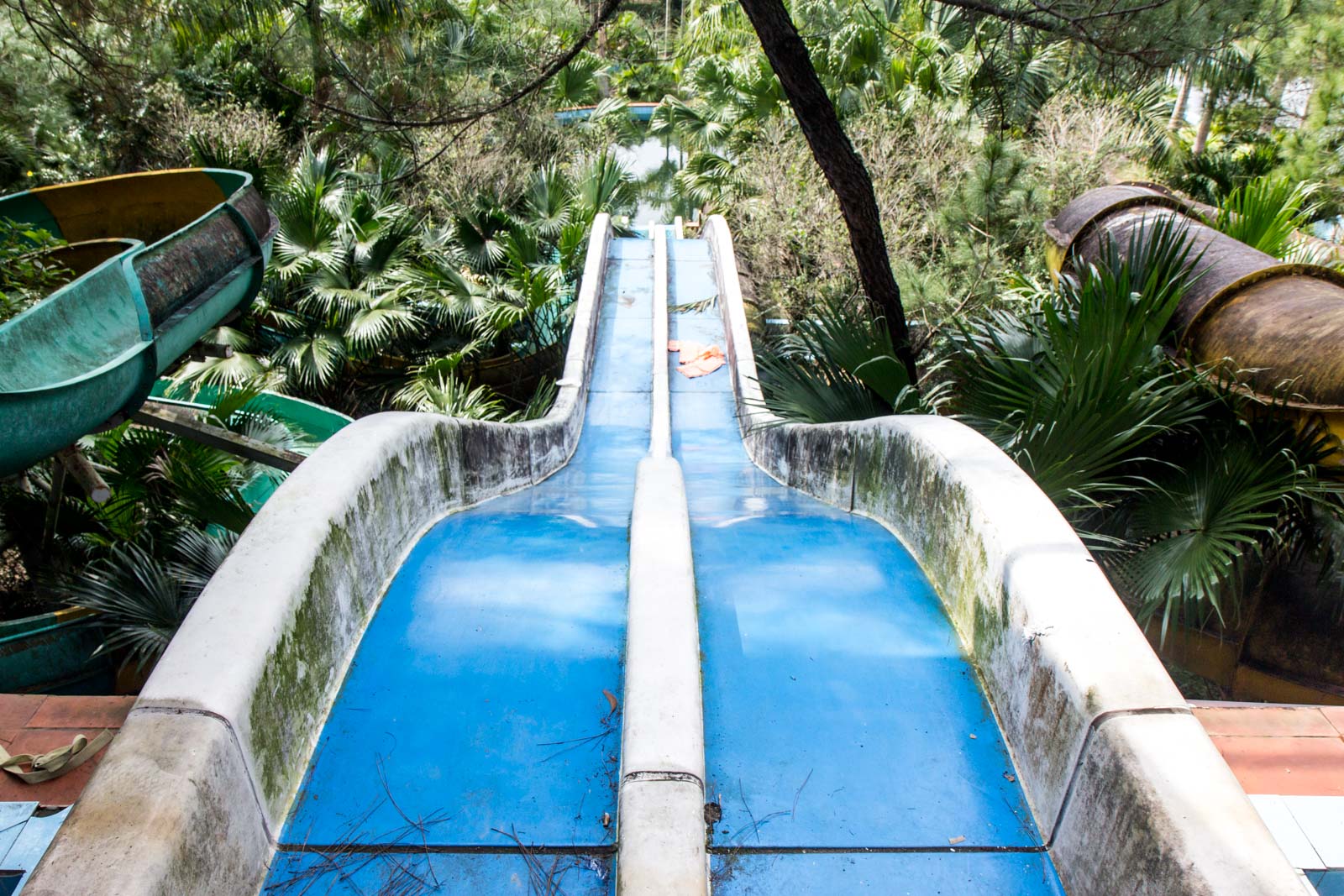 A herd of cows was grazing at the edge when I arrived. They looked at me nonchalantly and then went back to their grass. I hope they never drink from the water in the pools. It was absolutely filthy – brown and full of sludgy algae. 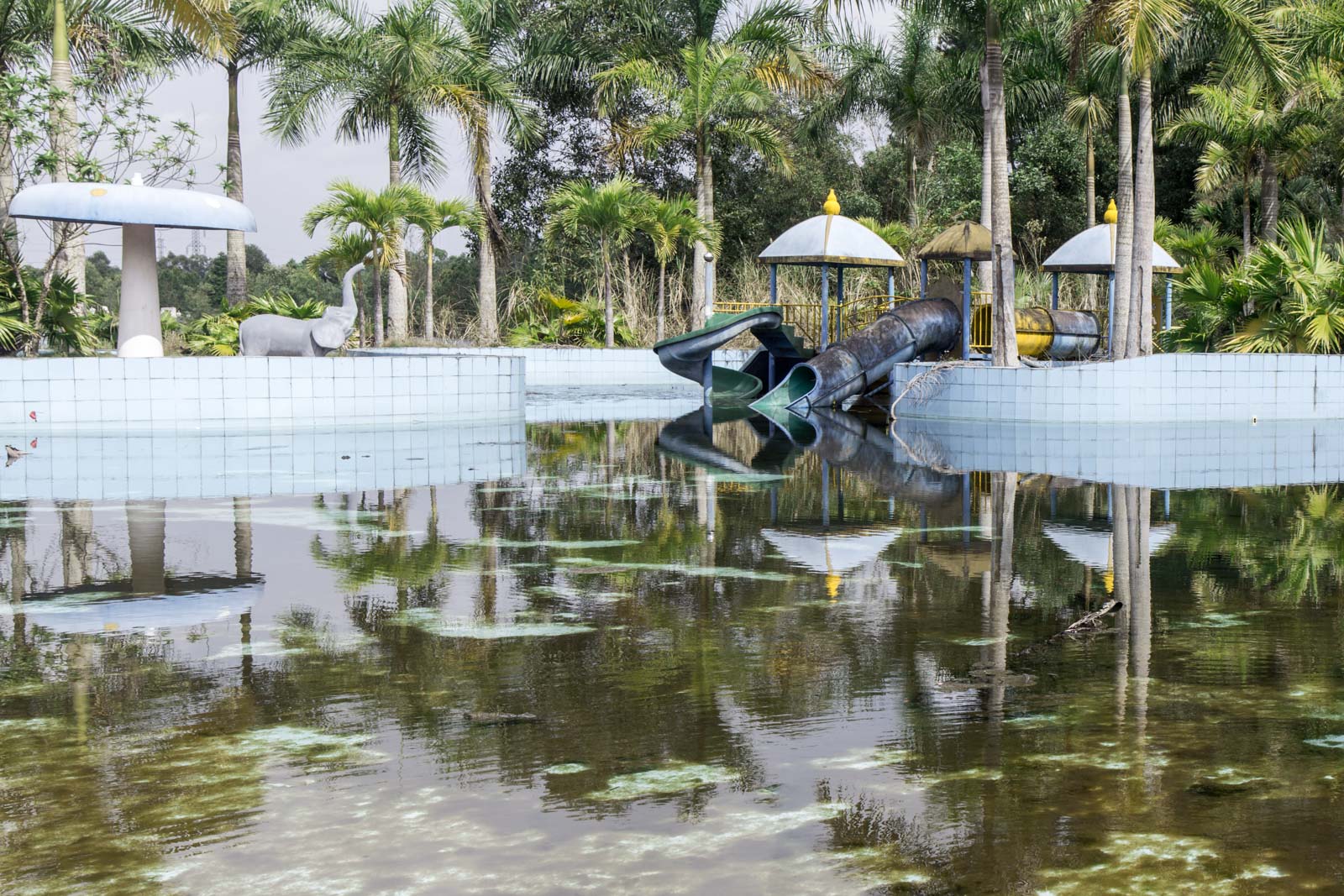 The plants had grown all around the slides and clearly weren’t going to stop anytime soon, with nobody bothering to cut them back. Yet the slides themselves – well, they looked pretty stable.

I could imagine still jumping into one at the top and making it the whole way down. The danger would be the water you would land in.

There were no crocodiles in the water, though. I checked. I’m not sure whether I was disappointed or not. The whole experience of exploring Ho Thuy Tien had not been quite what I had expected.

Certainly not disappointing but different. Not quite as thrilling as I had hoped for. After that bit of a letdown, perhaps a few crocs is just what I needed.

>> See what else there is to do in Hue
For a good backpacker option, I would suggest staying at Why Not. Yes, that's its real name.
A good choice for a budget hotel in a great location is the Four Seasons Hotel.
For a wonderful relaxing ecoresort a little bit out of the city, Pilgrimage Village Boutique Resort & Spa is a great place.
And for luxury by the beach, have a look at Ana Mandara Hue Beach Resort.

WANT TO KNOW MORE ABOUT VIETNAM?

To help you plan your trip to Vietnam:

You may also want to consider taking a tour through Vietnam, rather than organising everything on your own. It will be much easier and it’s also a nice way to have company if you are travelling solo.

I am a ‘Wanderer’ with G Adventures and they have great tours in Vietnam.