A George Michael song is playing through the speakers. I listen for a second – it’s Freedom! ’90. I recognise some of the lyrics.

It’s not what I would have expected here in Bishkek. Especially not inside a building that feels like a crystal cathedral.

It’s making a strange experience even stranger, but somehow the song doesn’t feel too out of place amongst the gaudy decorations and brightly-coloured stained-glass windows. 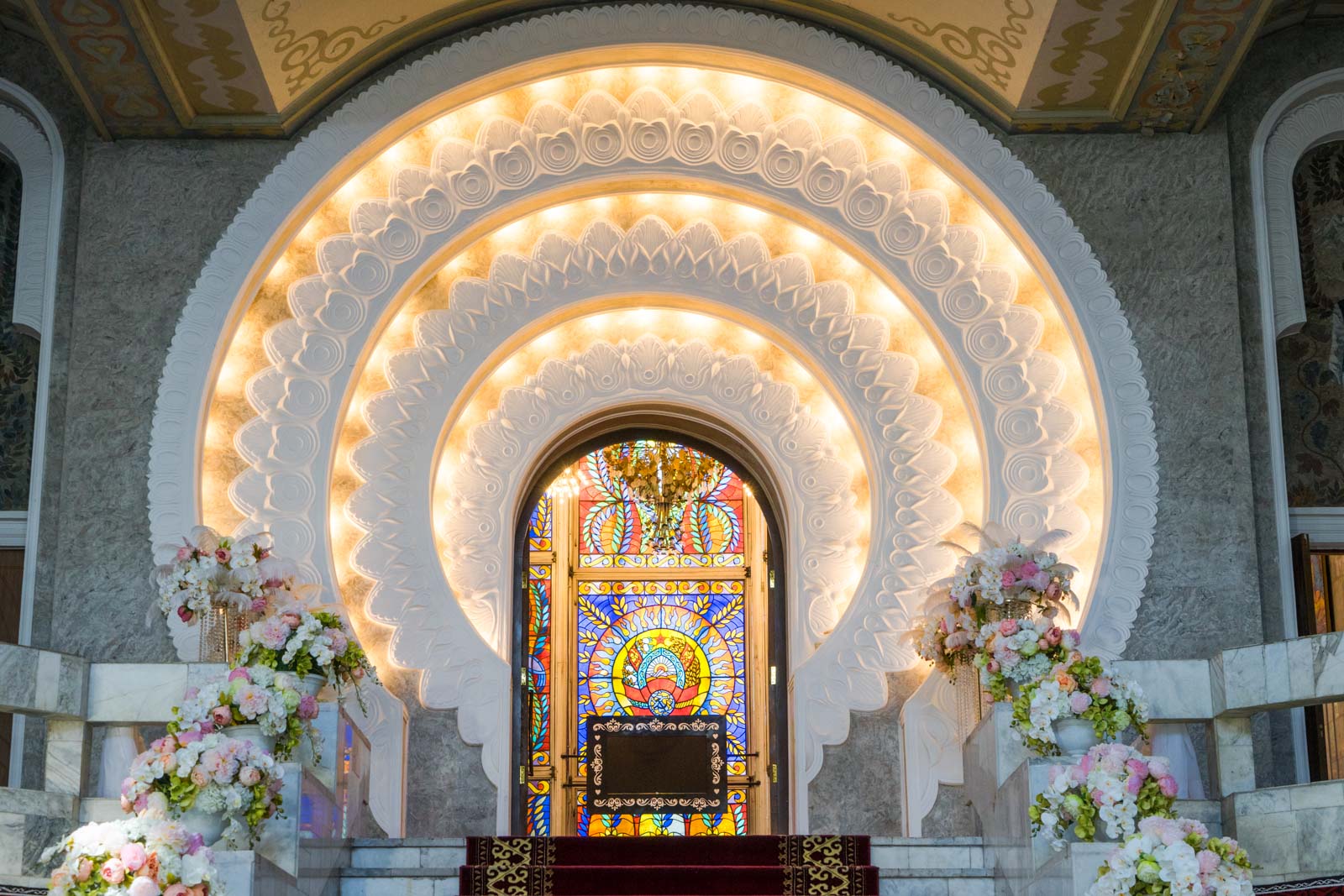 It’s not hard to spot the Wedding Palace from the outside – an enormous concrete monolith with large jewel-like windows pointing up to the blue sky.

In the circular driveway at the front, limousines and stretch hummers wait. A tiled fountain is colourful… but waterless. Well, it is summer, I guess. 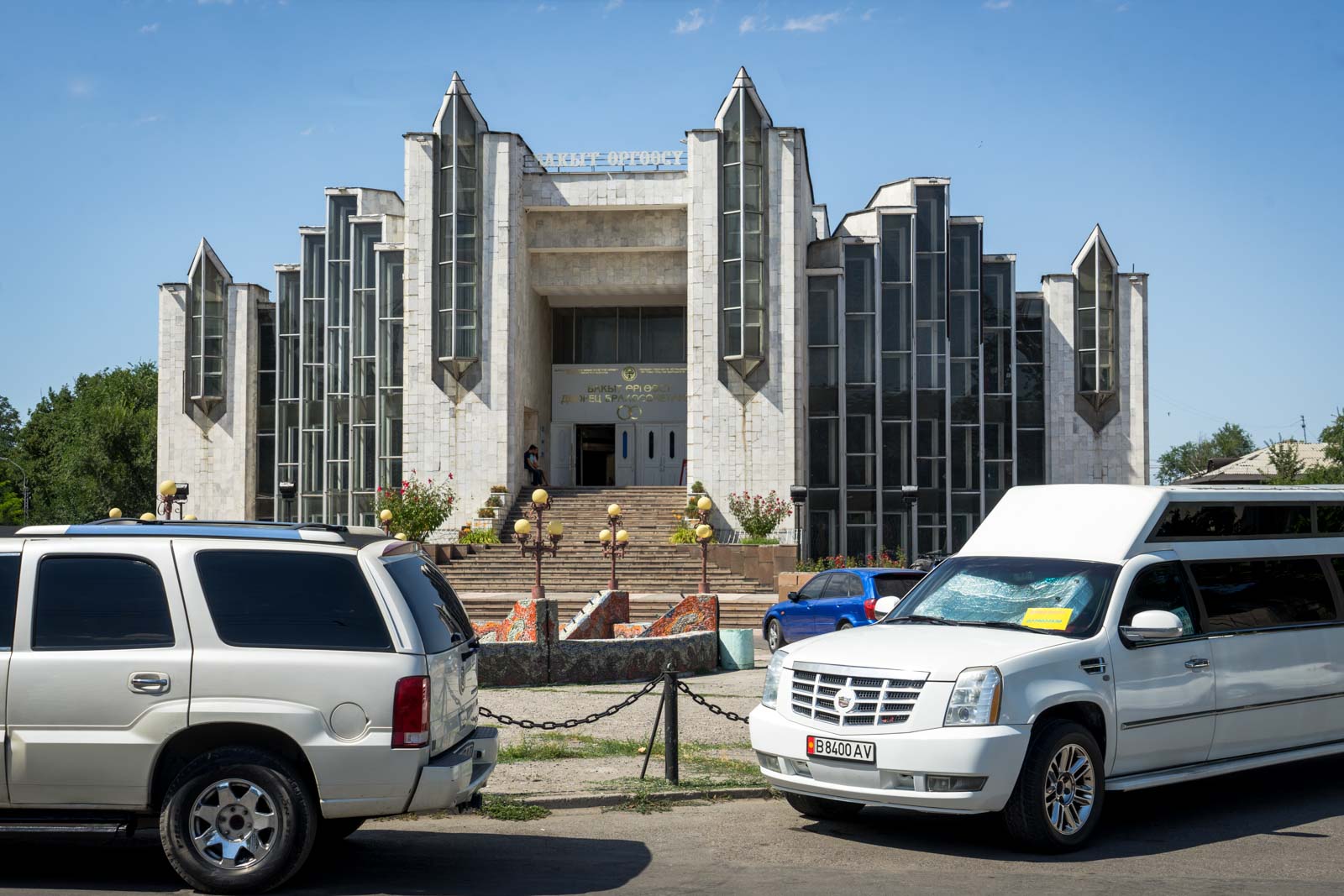 It looks like it could be a castle, a church, a temple. It looks futuristic on one hand, but distinctly brutalist communist on the other.

It’s almost like something from science fiction, perhaps one of those monuments built in the past by an advanced alien race that was wiped out before humans even existed. 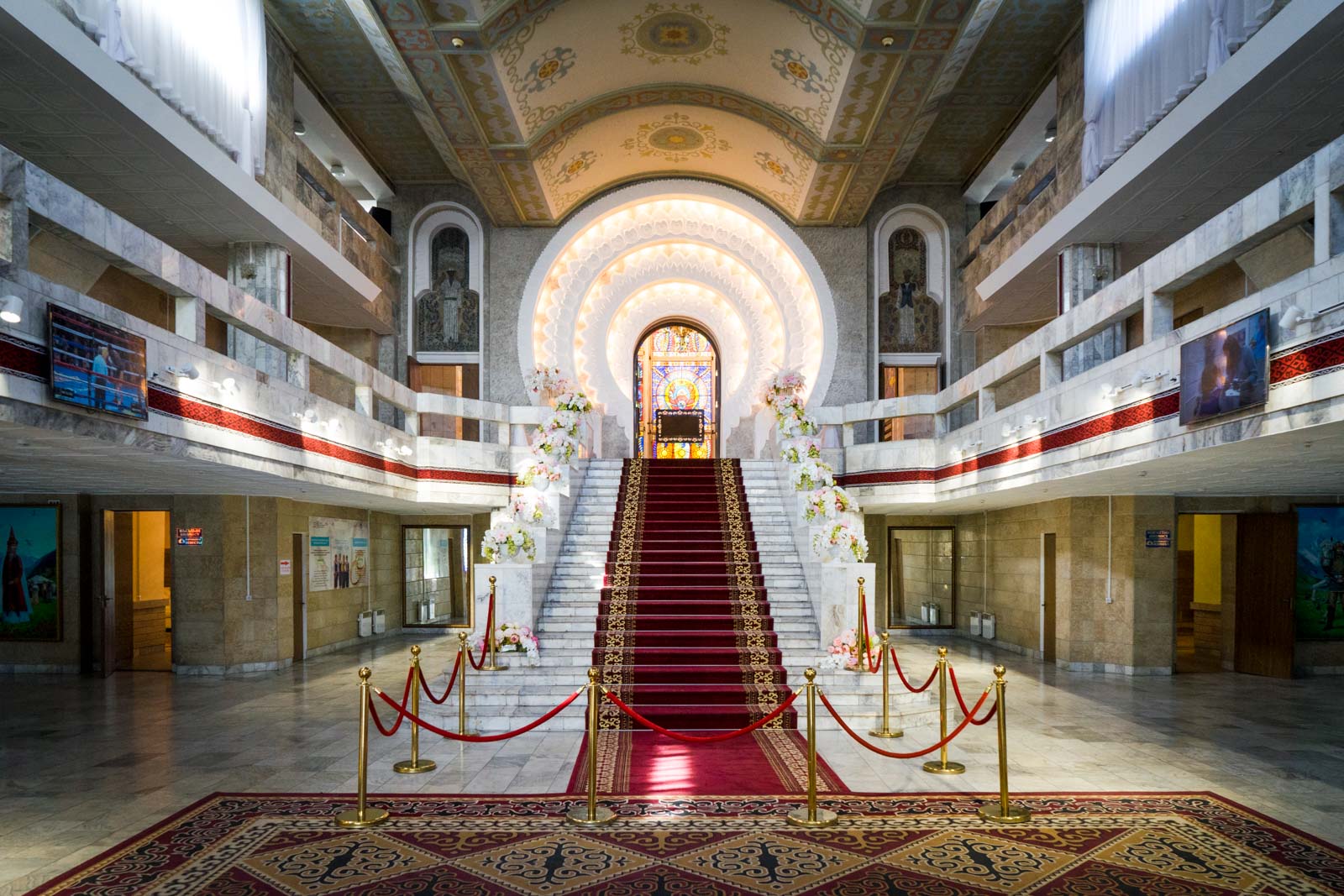 To understand the Wedding Palace, we need to go back to 1980s, when Bishkek was part of the USSR. Under Soviet rule, religion (and religious ceremonies) were prohibited.

This caused create consternation for the leaders of the various religions represented in Kyrgyzstan and one of their biggest concerns was that they could not perform weddings. To them, a couple was not truly joined in matrimony unless it was done in a holy place. 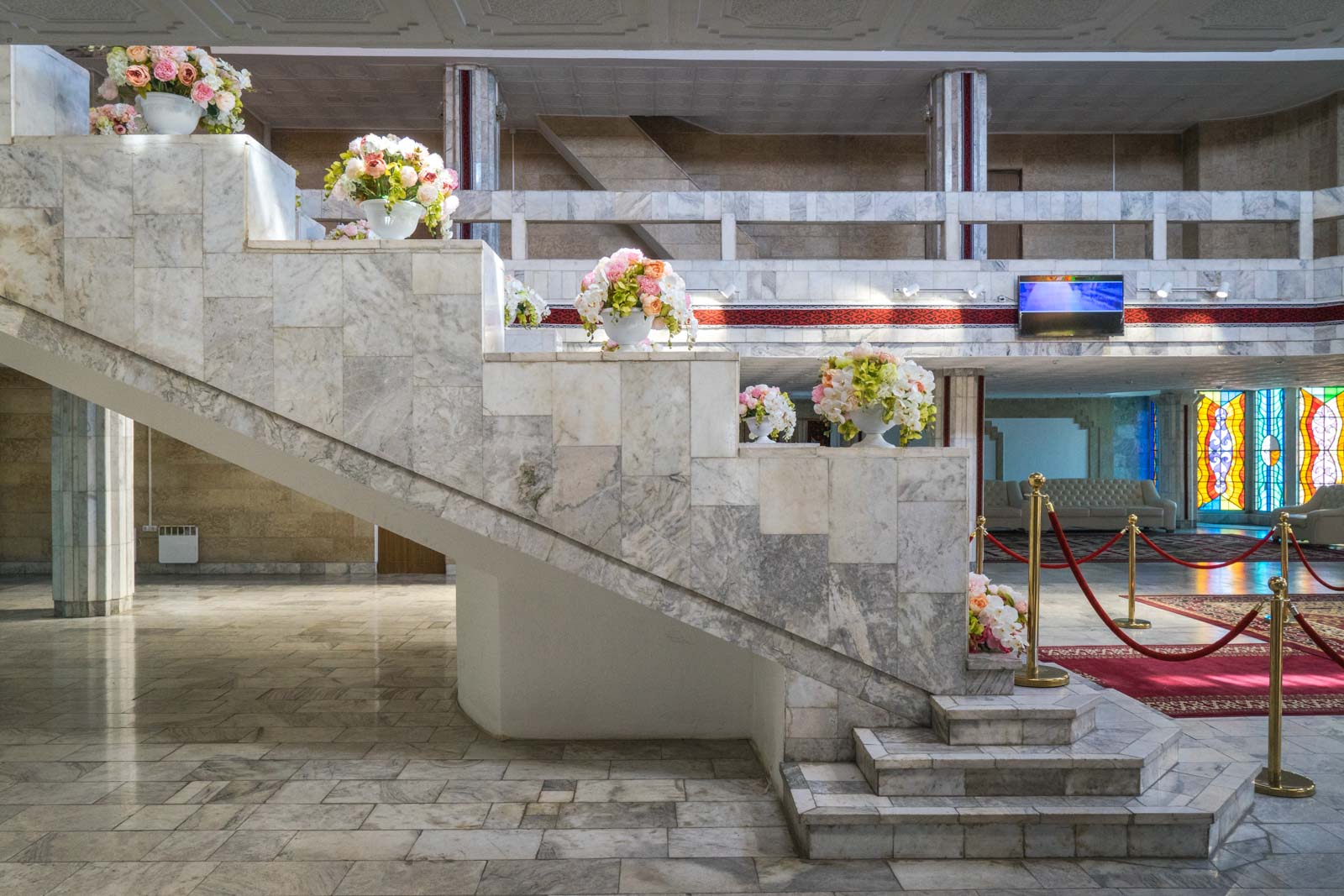 The Soviets wouldn’t allow religious weddings to take place but they did offer one compromise – the ceremonies could take place at a central ‘multi-faith’ building that would be shared by all the religions.

This, of course, is the Wedding Palace and it was opened in 1987. 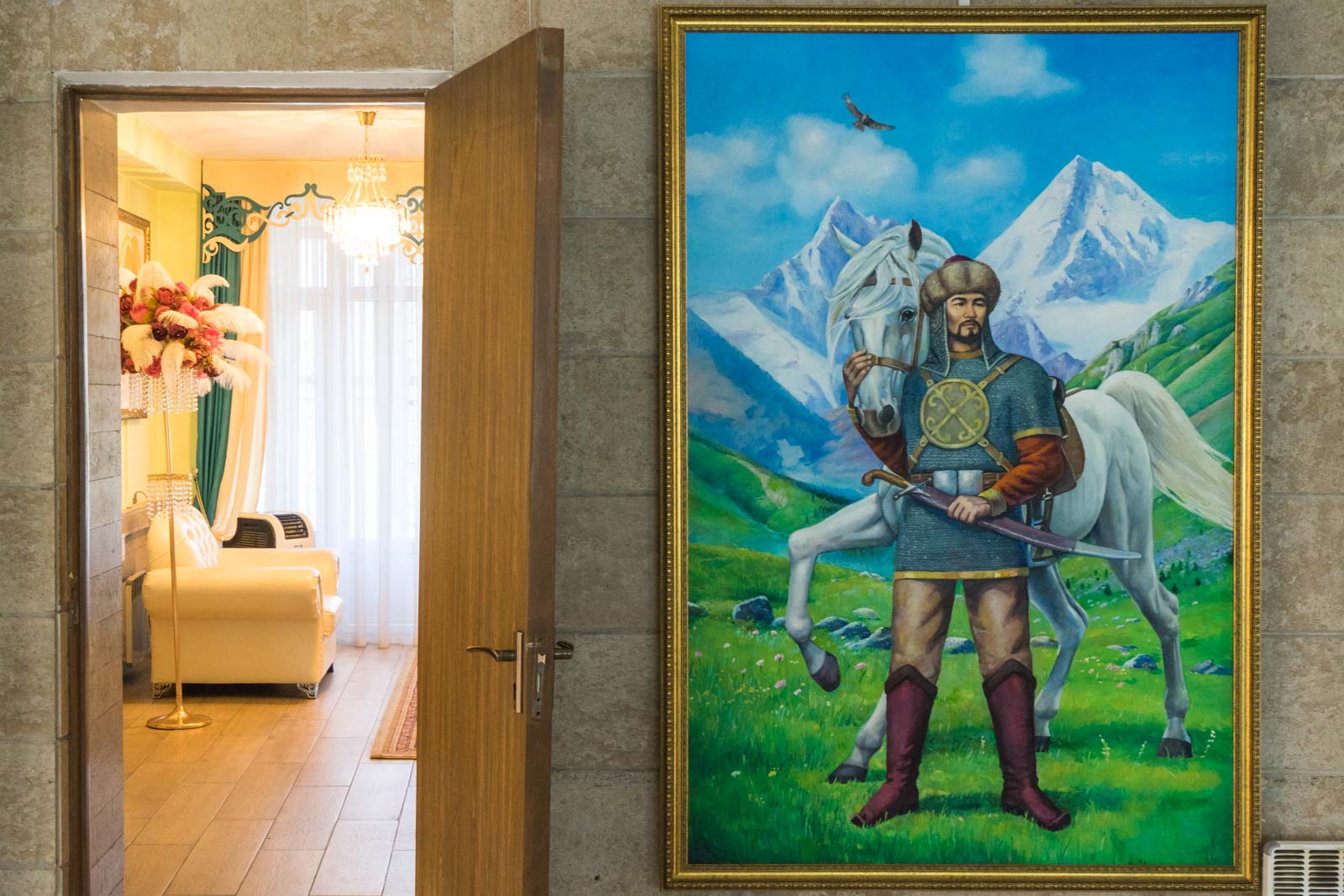 I go in through the main entrance and right in front of me is a large marble staircase covered in a red carpet leading up to a door surrounded by glowing white circles.

It’s up here that couples are married, in the inner sanctum of the palace, where nobody else may step foot. Velvet ropes, probably straight out of a sticky nightclub, block the bottom of the stairs. 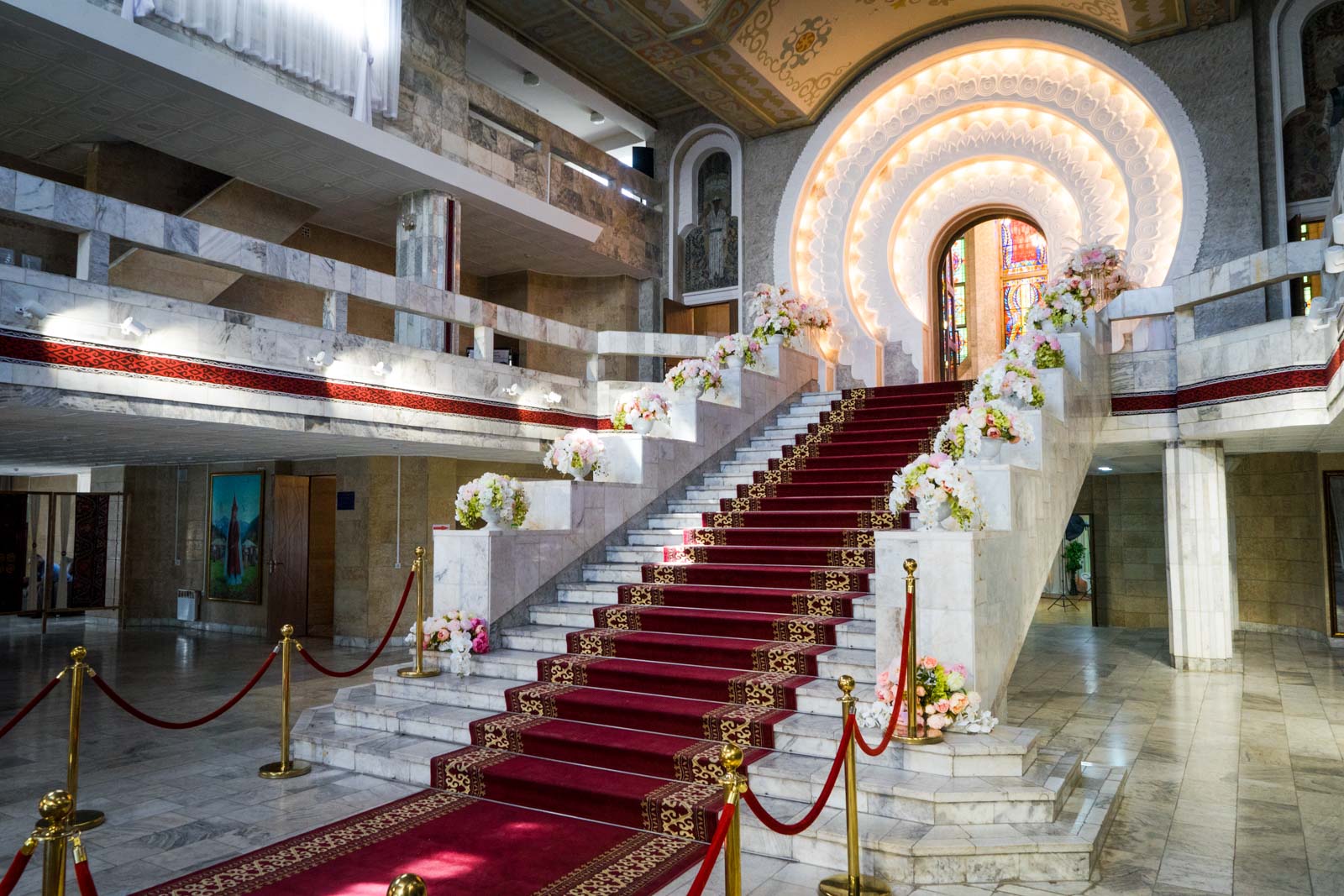 But it seems that I can walk around and have a look at some of the other parts of the building.

I walk past the stained-glass windows, blue and green and red and orange. They are fairly meaningless geometric shapes now, the communist symbols of labour and patriotism from the original designs having been removed. 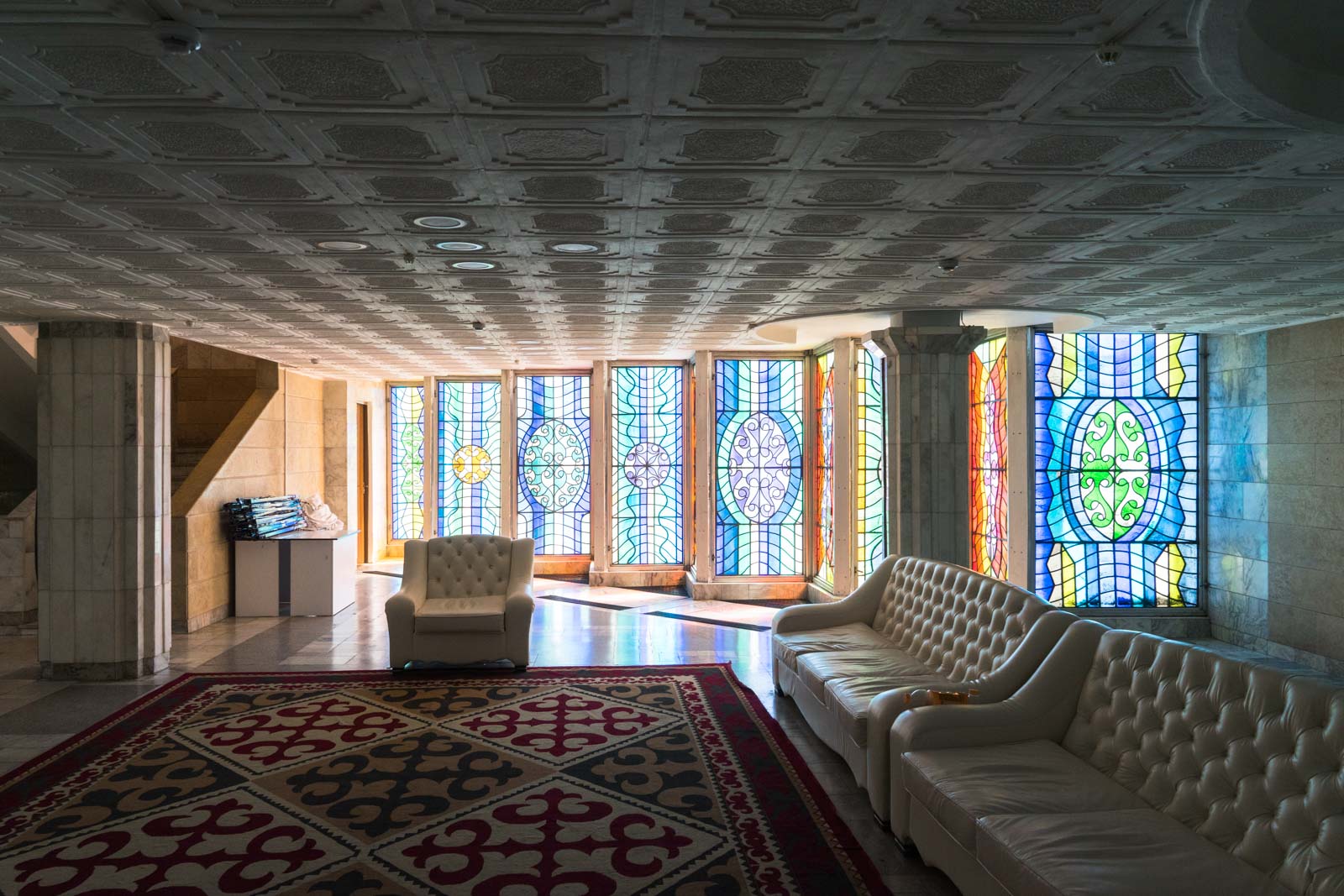 The different doors coming off the main hall lead to dressing rooms for the bride and her family on one side, and the groom and his family on the other. There’s a space for a photoshoot, and offices for administration work. 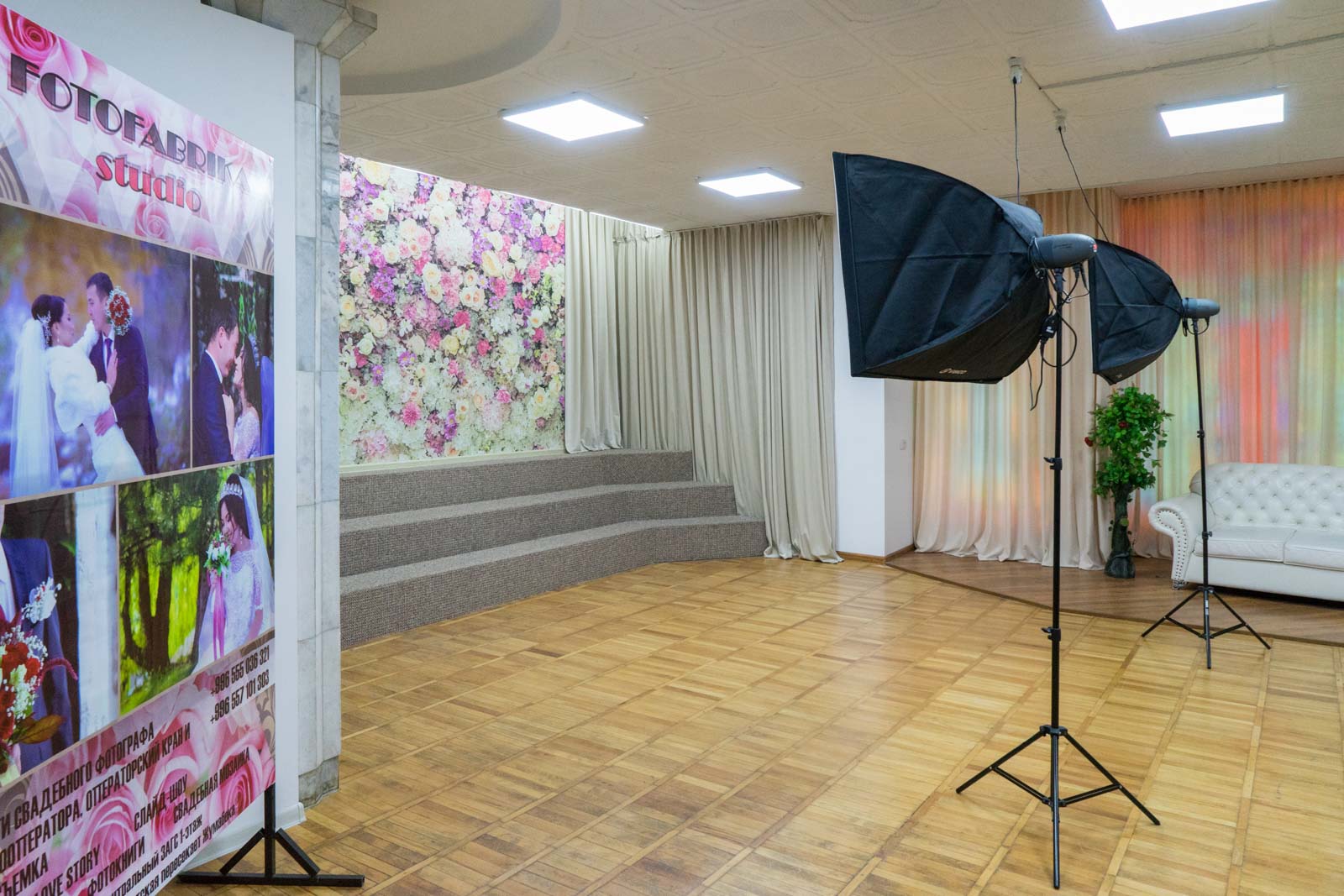 Although the building is open and I can have a look around, it is almost empty. A few people, I notice, are coming in and out with paperwork – presumably to make appointments or arrangements for weddings. Because the ceremonies didn’t stop when the Soviet Union fell apart. 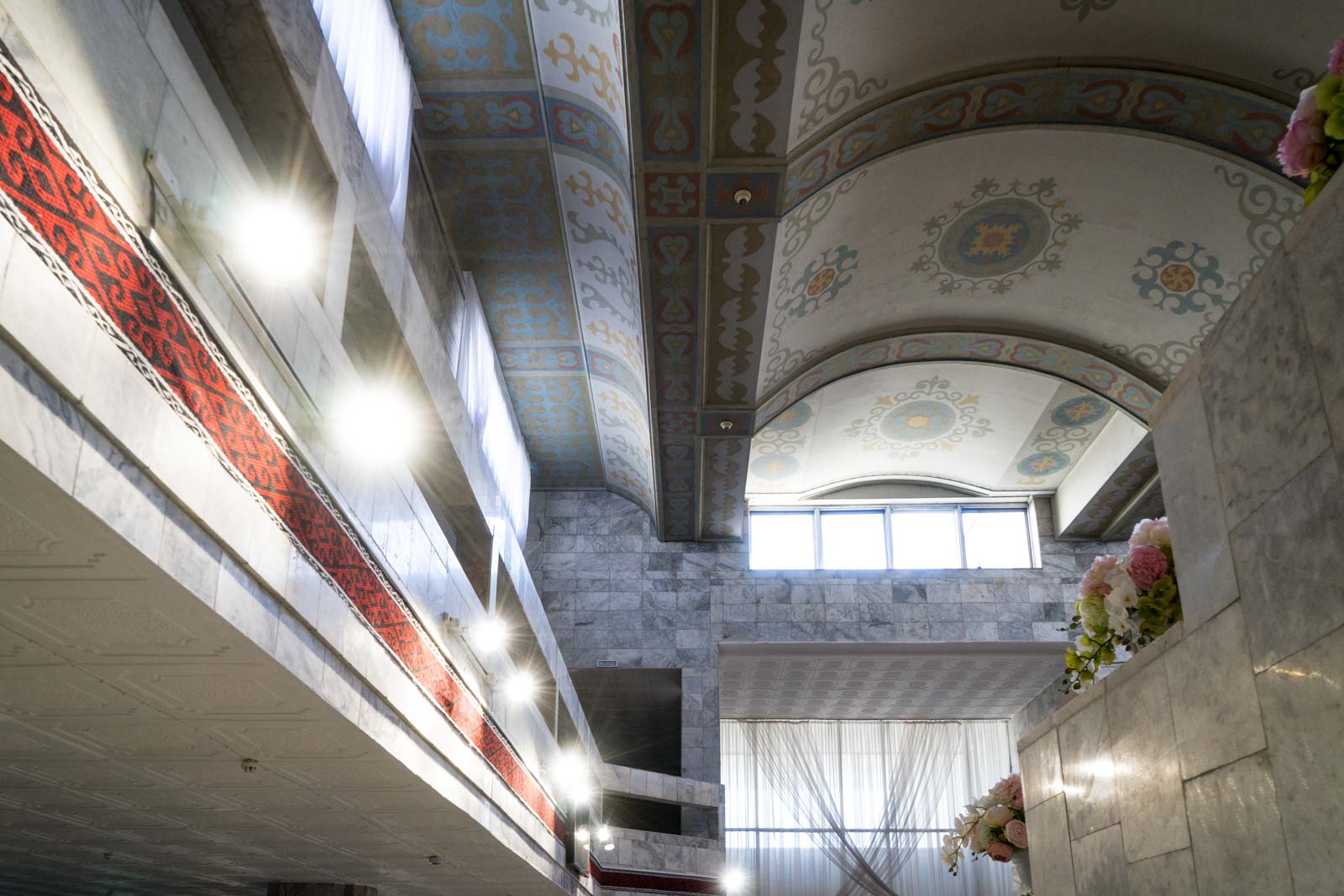 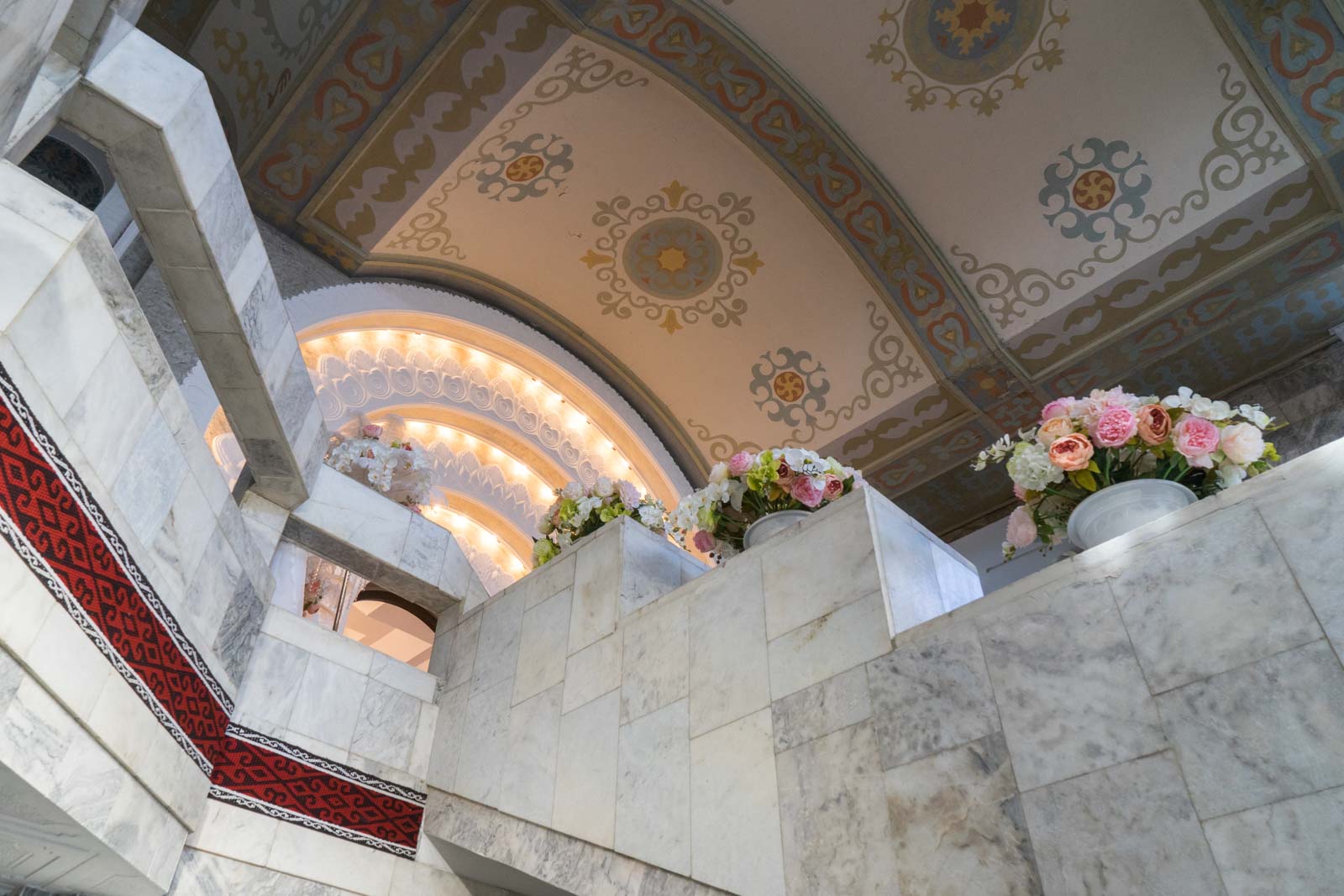 The Wedding Palace is still a popular place for young couples to get married here in Bishkek.

Not as popular as it used to be, sure. And probably not as popular as the religious buildings that it sought to replace. But there is something about this concrete temple with its ostentatious glitz and glamour that still holds appeal.

Maybe it’s simple: that it represents what so many weddings are these day, garish displays reaching for extremes. 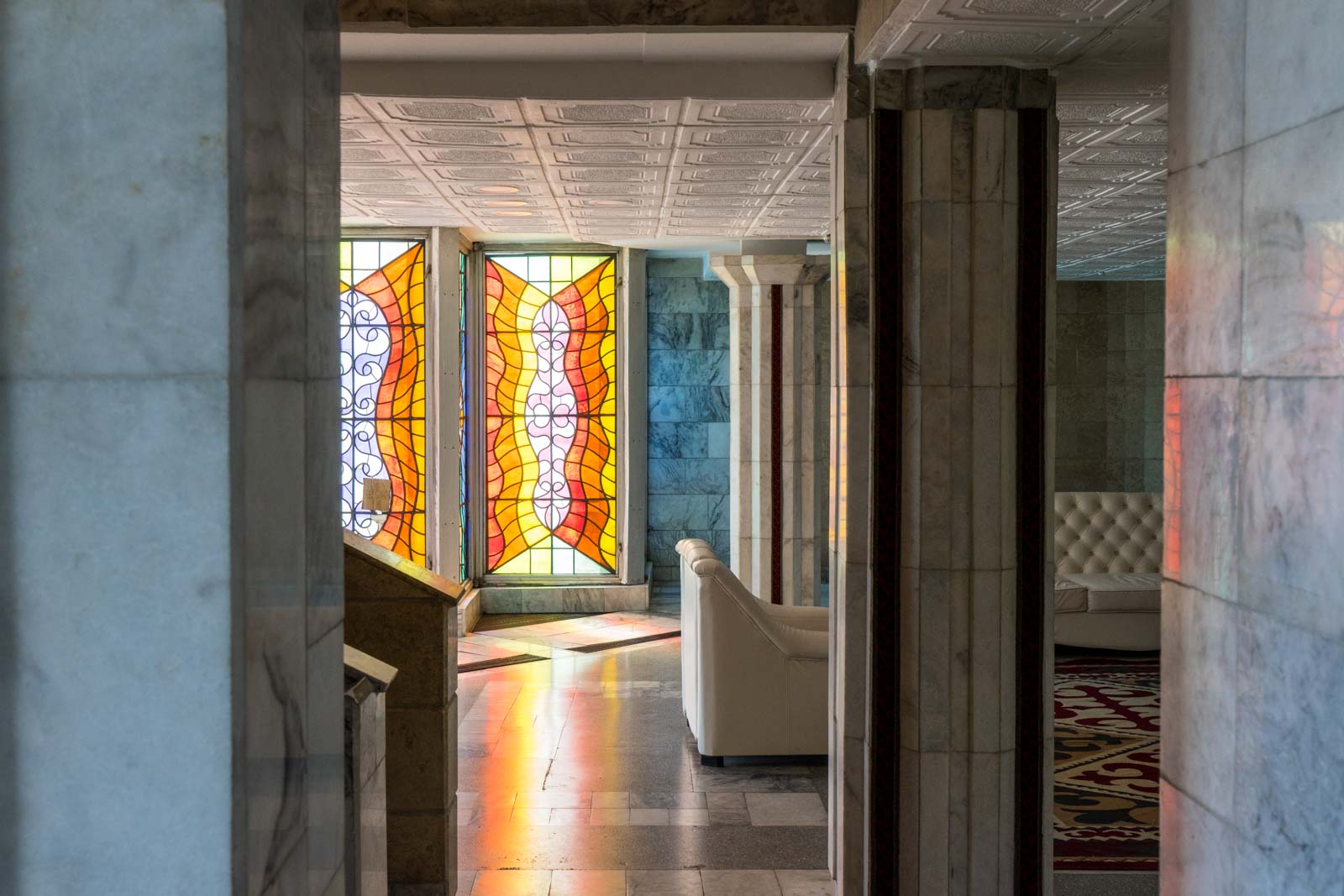 I pause before leaving, having one last look around, and waiting until the end of the song.

When I first heard it, I thought George Michael was a strange thing to be playing here. I realise, it’s not.

It fits perfectly. A song released during Soviet years, with an upbeat retro vibe and a whole lot of tacky. That’s what you get!