Phil seems a bit frazzled at the moment. It’s understandable – there’s a lot happening in her life right now.

Not least of these things is her move back to New Orleans.

She’s been gone for ten years, ever since the flooding of Hurricane Katrina swallowed up her house, along with much of this part of the city.

But as the city slowly rebuilt itself, Phil’s house lay dormant. She had moved to Oklahoma after the disaster and several attempts to restore her house had failed for various reasons.

It’s only now, weeks before the tenth anniversary, that she is making a final and concerted effort to make her home liveable again. When I meet Phil at her home in the Lower Ninth Ward – the hardest hit area – there are about a dozen people working on the site. A few are crouched around the verandah’s fence, painting it white.

One woman is up a ladder, painting the window trims.

A few steps inside the hallway, I find a few more people assessing some tiles and discussing their next plan of action.

It’s because of the people here working on her house are volunteers who have come from across the country to make sure she finally gets back on her feet. 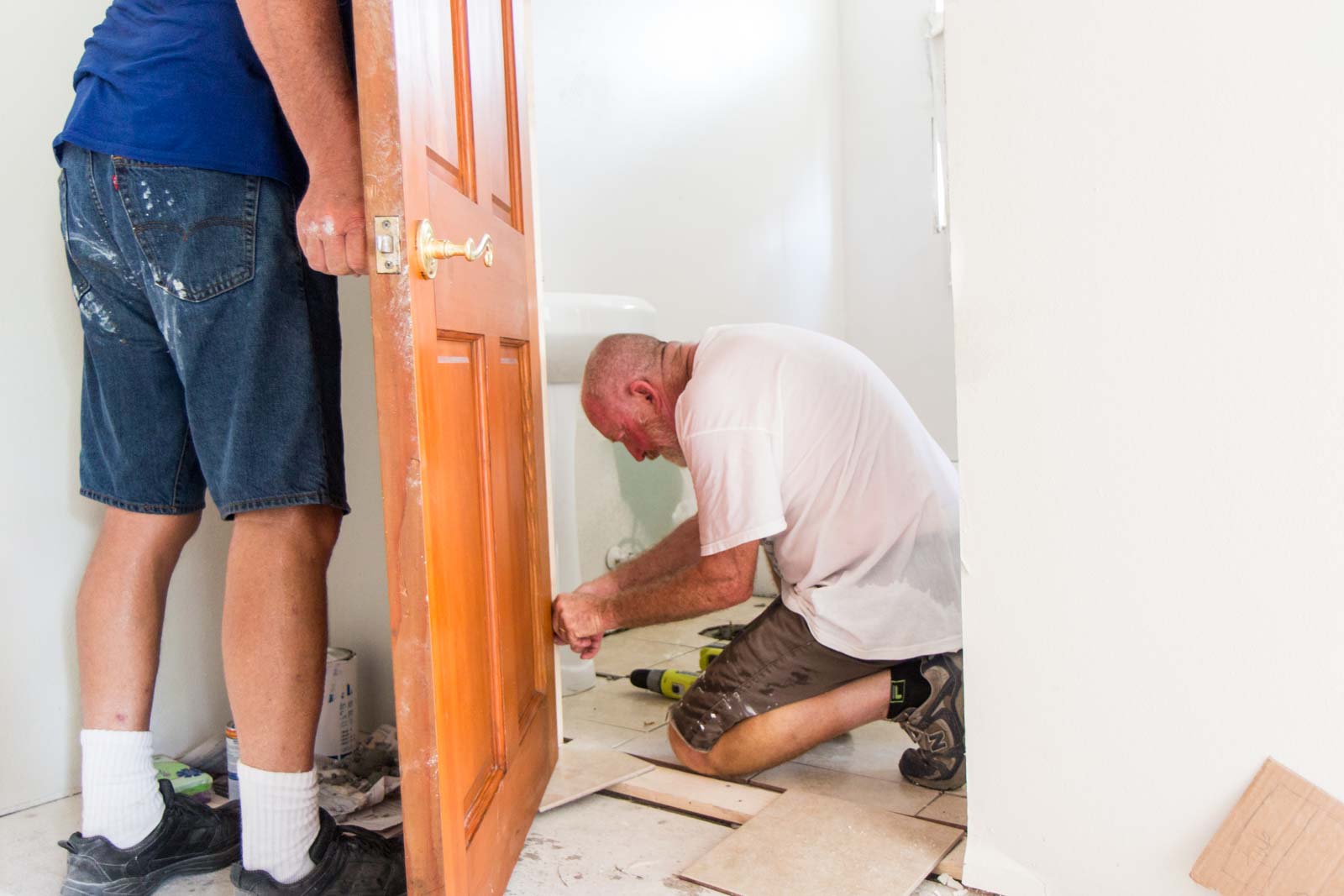 “This woman has suffered,” one of volunteers, Jennifer Hillberry, tells me.

“She’s been through a lot and we’ve been blessed so we want to bless her as well by giving her our time and our talents and do what we can to make sure she has a home. Because we have a home and she should have too, as soon as possible.” 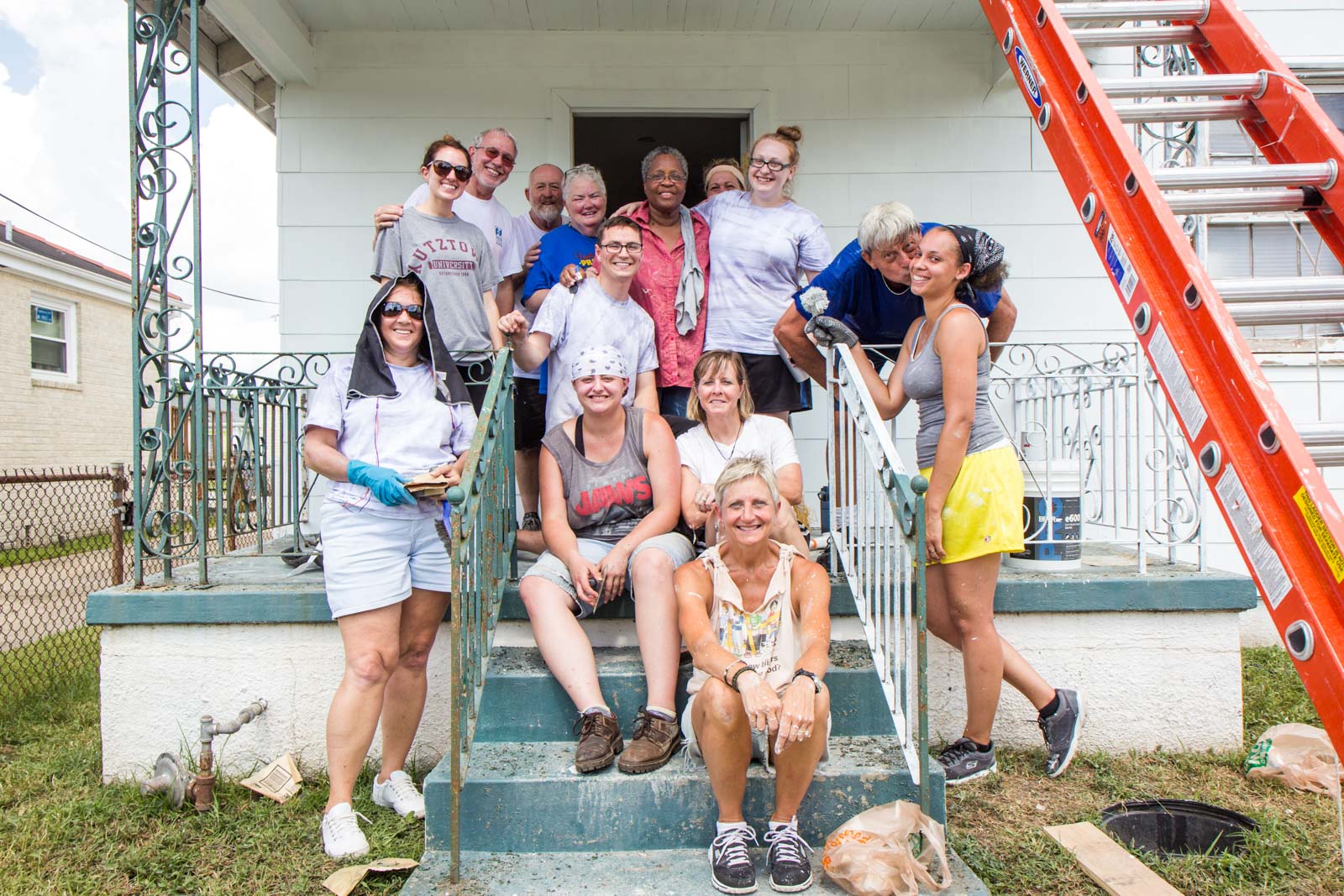 Jennifer and many of the other people working here today are members of a Baptist church in New Jersey. Their pastor, Sue Royle, says the church network has been working here in New Orleans on recovery efforts since right after the hurricane hit.

“The theme is ‘until the work is done’ and that’s why we’ve been doing it constantly,” she explains, as she continues to paint the railings.

“Our job is to make sure everyone is treated equally and sometimes those who are poor don’t get treated equally in the United States and so we step in and help them and get them the justice they need.” That was one of the cruellest things about the damage from the flooding during Hurricane Katrina. The areas where the wealthiest residents live were hardly hit, because they are the older parts of the city that were built on higher ground by the French.

It was the poorest suburbs that have gradually spread out from city centre over the years that were on lower ground and felt the full force of the damaging water.

“She was in this house when the levee broke and the water started coming and she knew she should’ve left but they made it through the hurricane.”

Sue is telling me Phil’s story, which she has learnt herself just this week. “The next day the floodwaters came, 14 feet, she was up on her roof and it was only because some people broke into a school and got supplies and boats that they came by and rescued these people. They were trapped here and nobody was coming to help them.”

“And so when she tells the story to you, you realise what these people have gone through. Now for ten years she’s been displaced, hoping and praying she can get back to her home that she grew up in, the only home she’s ever owned, and so when you hear that it really doesn’t become anything about us. Our focus is now getting her back in this house.” Driving through the grid streets of the Lower Ninth Ward, it’s interesting to see the disparity, block to block.

Some old homes have been beautifully restored and some new ones have been built on the land where houses were demolished.

Some people seem to be living in simple shacks and there are also plenty of empty lots where no progress, except a clean up, is evident – even this long since the event. 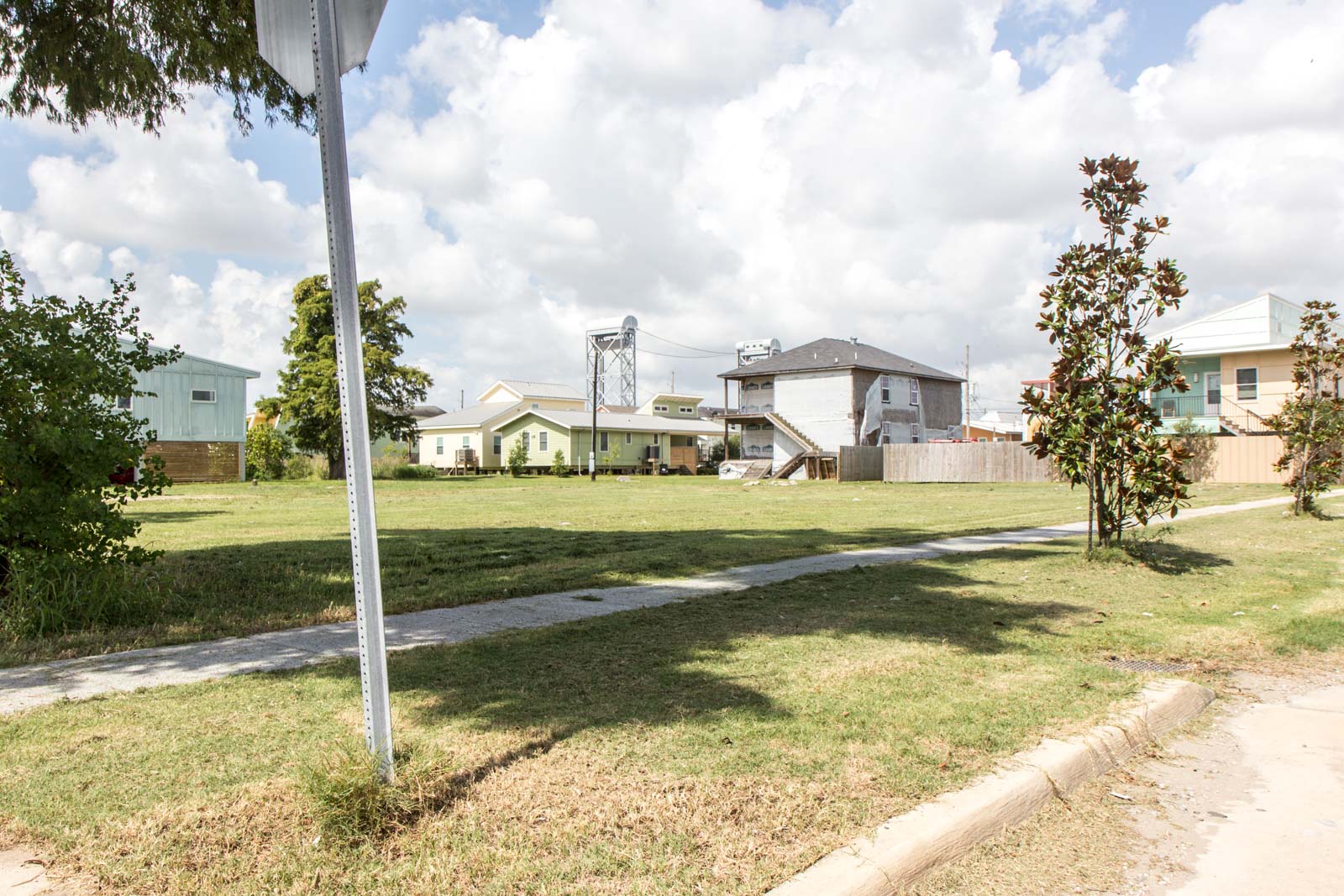 It seems odd to me that a decade has passed and yet there is still clearly so much work to do.

I would have thought that enough time had passed for a full recovery – at least at an infrastructure level. But the population here in New Orleans is still 100,000 people less than it was before the disaster.

Kurt Jostes is driving me around to show me the area so I can get a better understanding of the work he does. He is the Deputy Director of Camp Restore, a non-profit organisation that accommodates and feeds volunteers who come to the city to help, like the ones working on Phil’s house.

Kurt acknowledges that the overall recovery effort seems to be taking longer than it should but points out that about 80 per cent of houses are now rebuilt or restored and the ones remaining are the trickiest, for all sorts of economic, social and practical reasons. 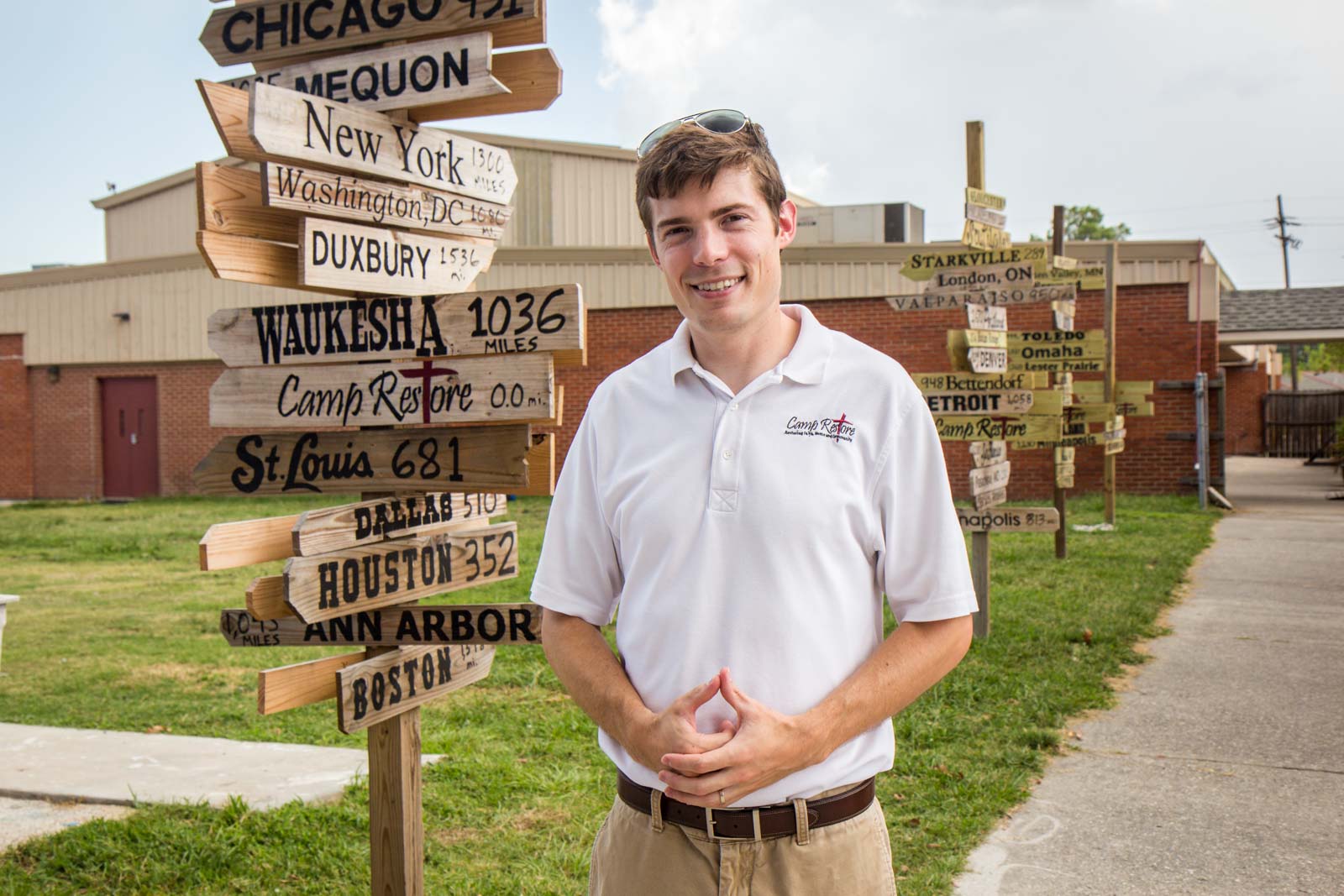 “When you start out with over 100,000 properties that need work and now you’re talking about 10,000 or less remaining, that’s huge progress. It’s just that when you start with so many, even a small percentage of a very large number is still a large number.”

Much of the volunteer work that has been done in the past decade has been by people who have stayed at Camp Restore.

During the busiest months (from January until August) it hosts up to 200 people from across the country and the world. (While most volunteers come as a church or school group, you can volunteer as an individual too!)

The organisation offers beds, food and recreation facilities for the people who stay here and also finds them work placements – either with its own projects or with scores of others it is affiliated with. At first, the restoration of flooded homes was the priority but that has shifted over the years. Now the volunteers also do things like plant trees in local wetlands, work with senior centres, paint schools during the holidays, and help with summer camps for youth.

“A very large portion of what we do is not providing a service to people,” Kurt explains to me, “but it’s coming alongside people who are in need and working with them and their situation.”

“Because everyone has ability and capability to make a difference, even those who are themselves struggling.”

“But we are specifically focused on helping those who are more in need, who are struggling with particular things. The easy way to put it is that we’re not building buildings for country clubs, we are serving a population in need and we’re doing work that helps the public good.” That includes creative projects. Kurt stops his car and we get out at a block in the Lower Ninth Ward right on the edge of the suburb, next to a levee.

Here, another group of volunteers is working on a project to turn a plot of land into a meditation garden. The young workers are creating a path from the road that leads to a circular space that will be what they call ‘a labyrinth’, a place to rest and reflect. At first glance it might seem like an odd project to be focusing on when, within sight, there are still houses that need work or rebuilding.

But you have to understand that this is a suburb that has only one corner store and virtually no kind of infrastructure that you would expect from a residential area.

The idea behind this little garden is to make the suburb attractive again, to encourage people to move here, and for the critical mass of residents to lead to shops and public resources. The theme of the volunteer’s at Phil’s house may be ‘until the work is done’ but it’s clear that’s going to be a long time coming.

Even if the remaining 10,000 houses are restored and even if the population of New Orleans again gets closer to its original level, there’s a psychological scar in the suburbs that seems to be hindering an ultimate and perfect recovery. The centre of New Orleans – the business district and the touristy French Quarter – is doing well and the number of new affluent residents and visitors is high.

But drive down to this part of the city and you can see why places like Camp Restore are still working as hard as they have been for ten years now.

>> More info here about volunteering with Camp Restore
For a fun backpacker option, there's India House, or there's the more modern HI New Orleans.
There aren't a lot of good cheap hotels in New Orleans, but I would suggest French Market Inn or Wyndham Garden Baronne Plaza.
For hotels with more style, you can try Hotel Peter and Paul or The Saint Hotel.
And the beautiful Maison de la Luz is one of the best luxury hotels in the city!

Time Travel Turtle was a guest of the New Orleans CVB but the opinions, over-written descriptions and bad jokes are his own.