Another day in Germany and another grand building left in ruins by the meaningless destruction of war. This time it’s the Würzburg Residence in the city of Würzburg in the centre of the country.

The main damage was inflicted during an air raid on March 16, 1945. It wasn’t the bombs themselves that had the worst effect (although they certainly weren’t kind to the building). It was the fire that they caused which ravaged through almost corner of the enormous palace.

It burnt the furniture and the wall panels – those that hadn’t been taken away for protection. When the flames finally finished feeding, just a shell was left. 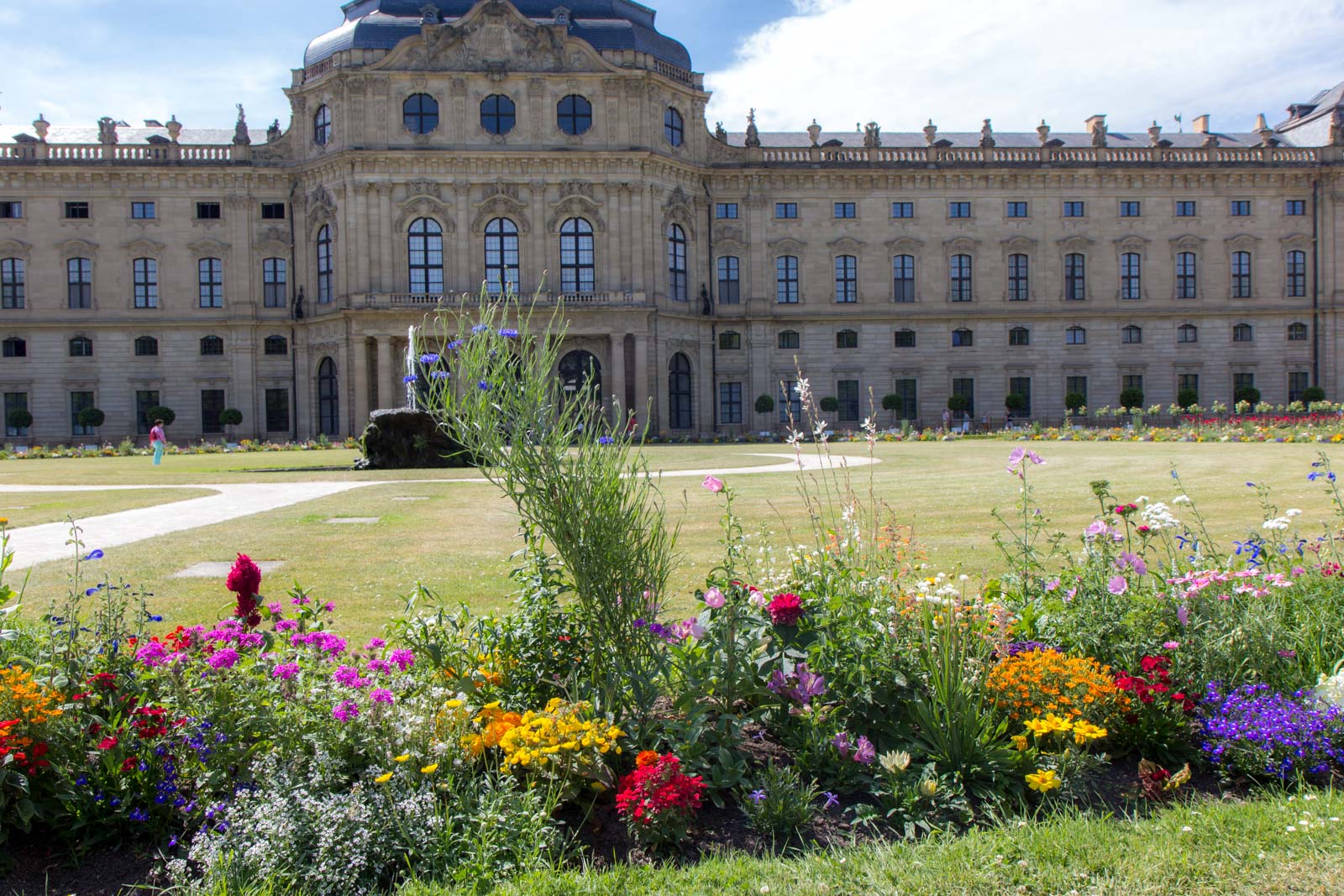 It just wasn’t possible for the Germans to leave the Würzburg Residence in ruins, though. It was too important and they were too proud of it.

The building had been one of the most important palaces in Central Europe before the Second World War. 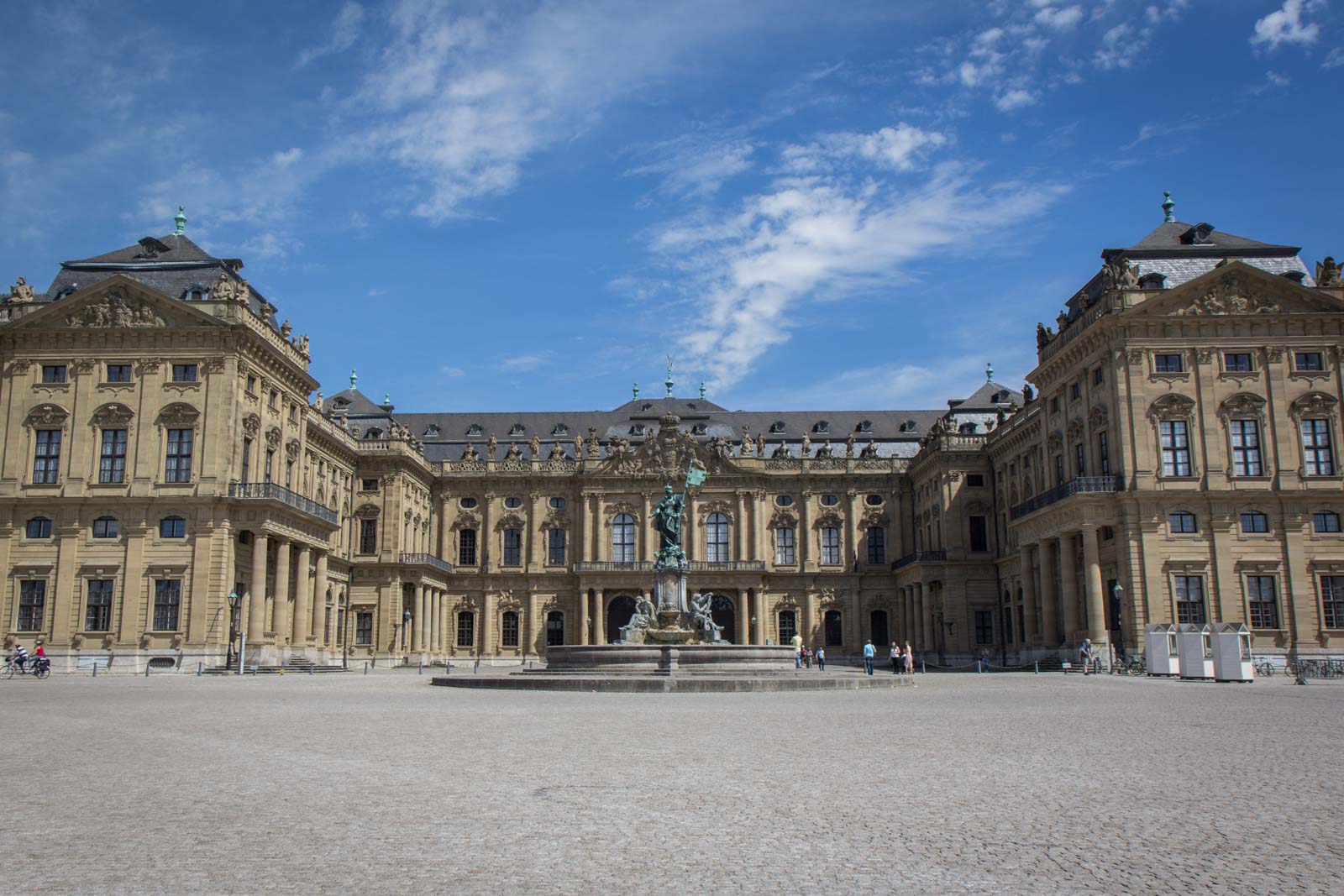 From right after the conflict ended and for another forty years, reconstruction took place. It cost more than 20 million euros but was finally finished in 1987. On the approach to the building, I get a sense of the size. It is more than 160 metres wide with two main floors.

There are so many windows looking out at me. If I could peer through them, I would see some of the 400 rooms inside. 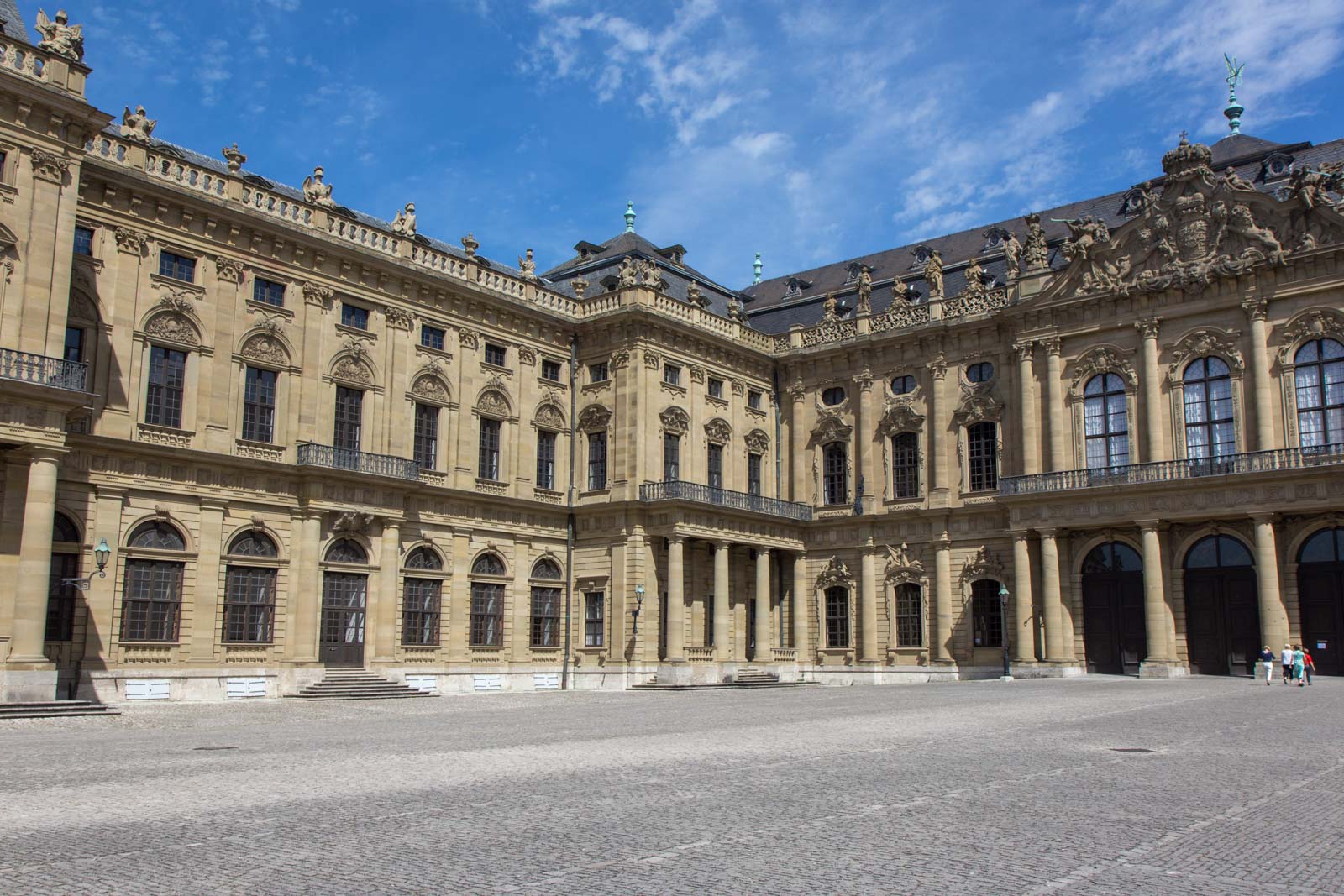 These rooms and the detail they contain are the real treasures of the Würzburg Residence.

Unfortunately photography inside is not allowed and so, despite my best charm offensive, I have nothing to show you from my tour of the interior.

You’ll have to trust me when I tell you that the beauty comes in both large and small.

In terms of the large, there’s the enormous central staircase which is 23 metres high with a vibrant fresco above it, the White Hall filled with stucco decorations, and the Imperial Hall with the large dome and marble. 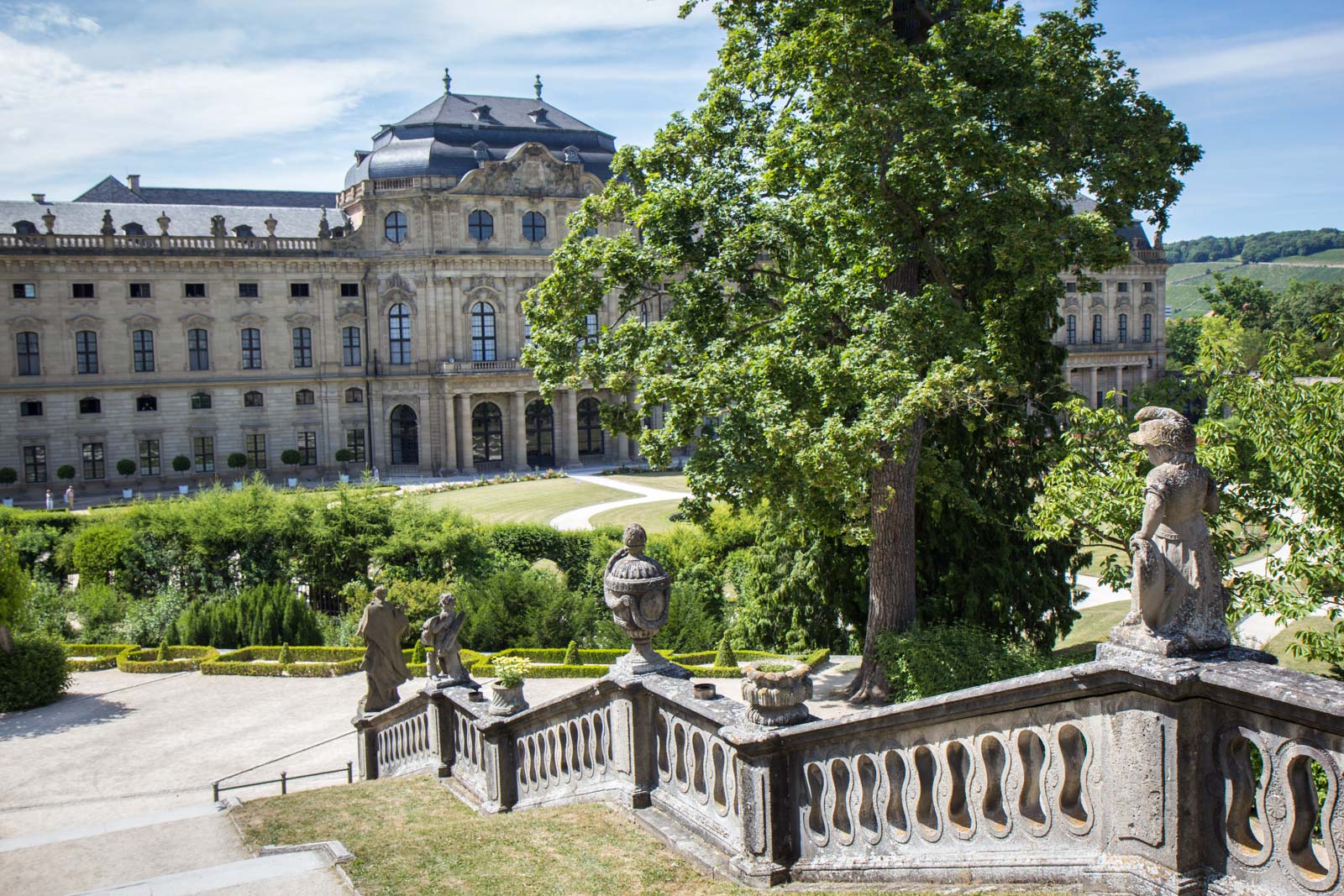 When it comes to the small, you find these details in the bedrooms and the reception rooms leading to them. It’s the paintings, the statues, the mirrors, and all the other items on display.

These rooms are magnificent as a whole but within them are countless treasures (although I assume someone has counted them, so I don’t try to grab anything as I go by). 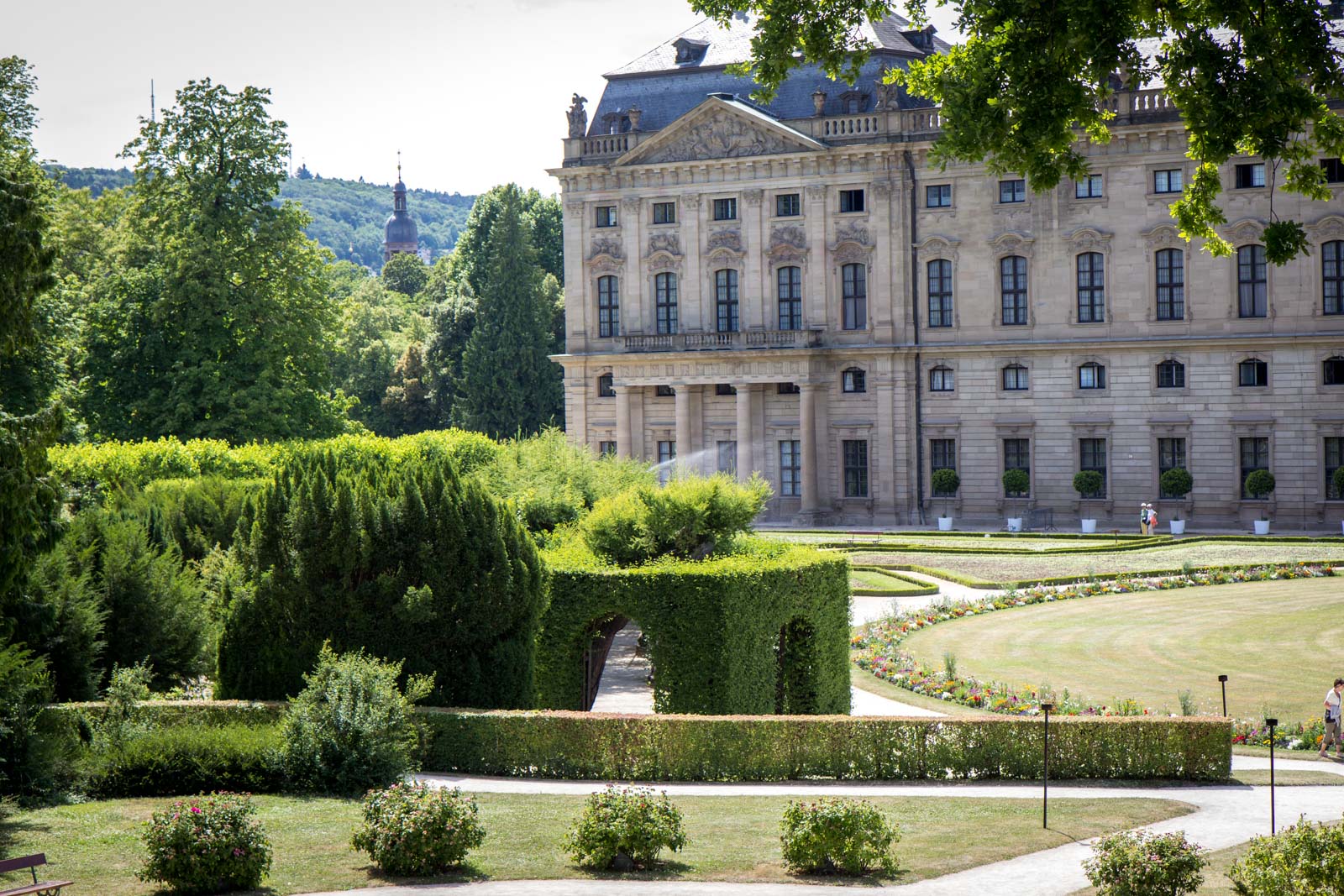 You can see some parts of the residence on your own but there are also areas that are accessible only with a guided tour.

It is well worth joining one because it will take you to some of these smaller rooms with the artwork and detailed decorations. Having a guide point out the significant parts of even the smaller rooms is also very valuable. 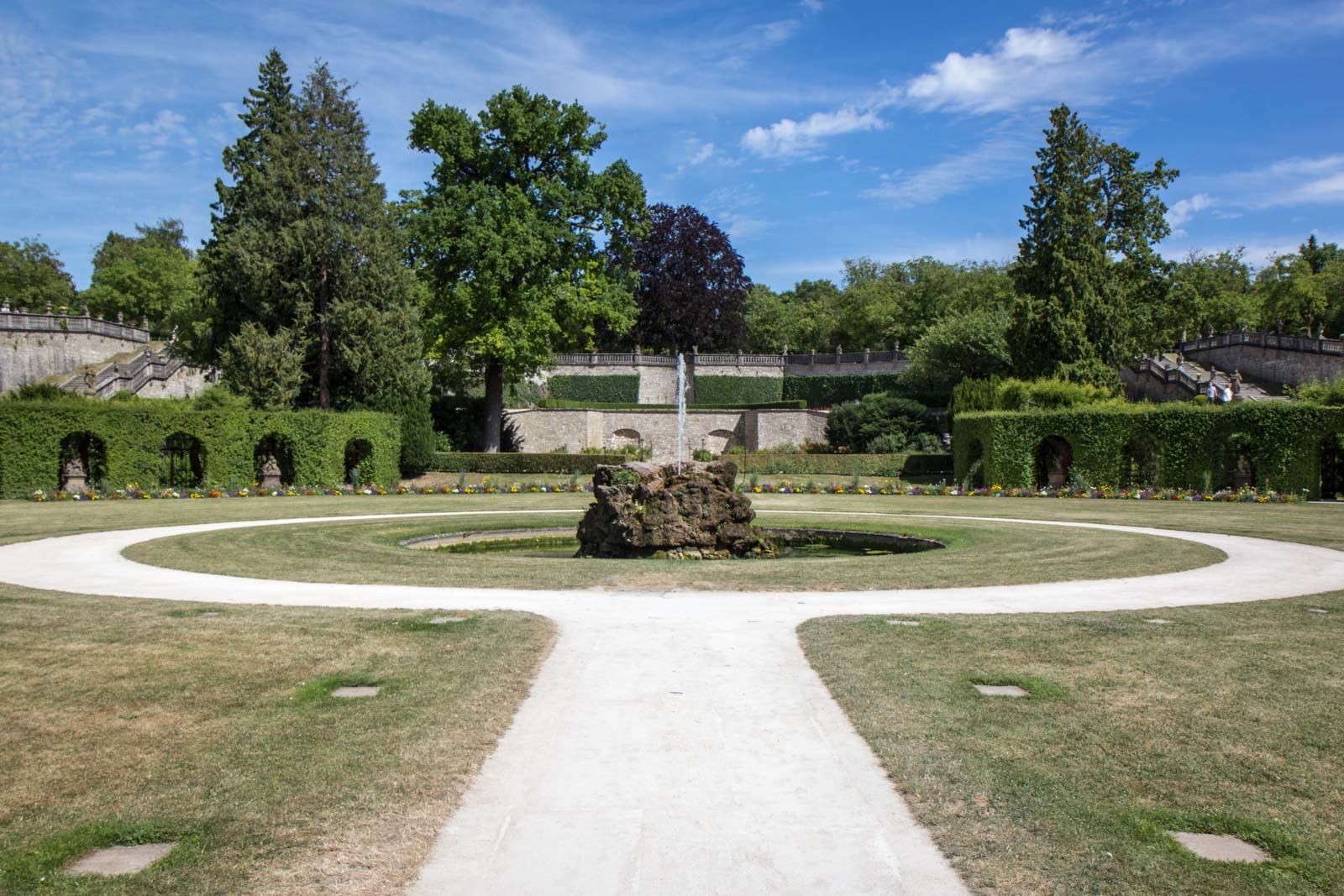 Part of the significance of Würzburg Residence is the gardens around them. You’ll notice that most of my photos are from there because photography is allowed. 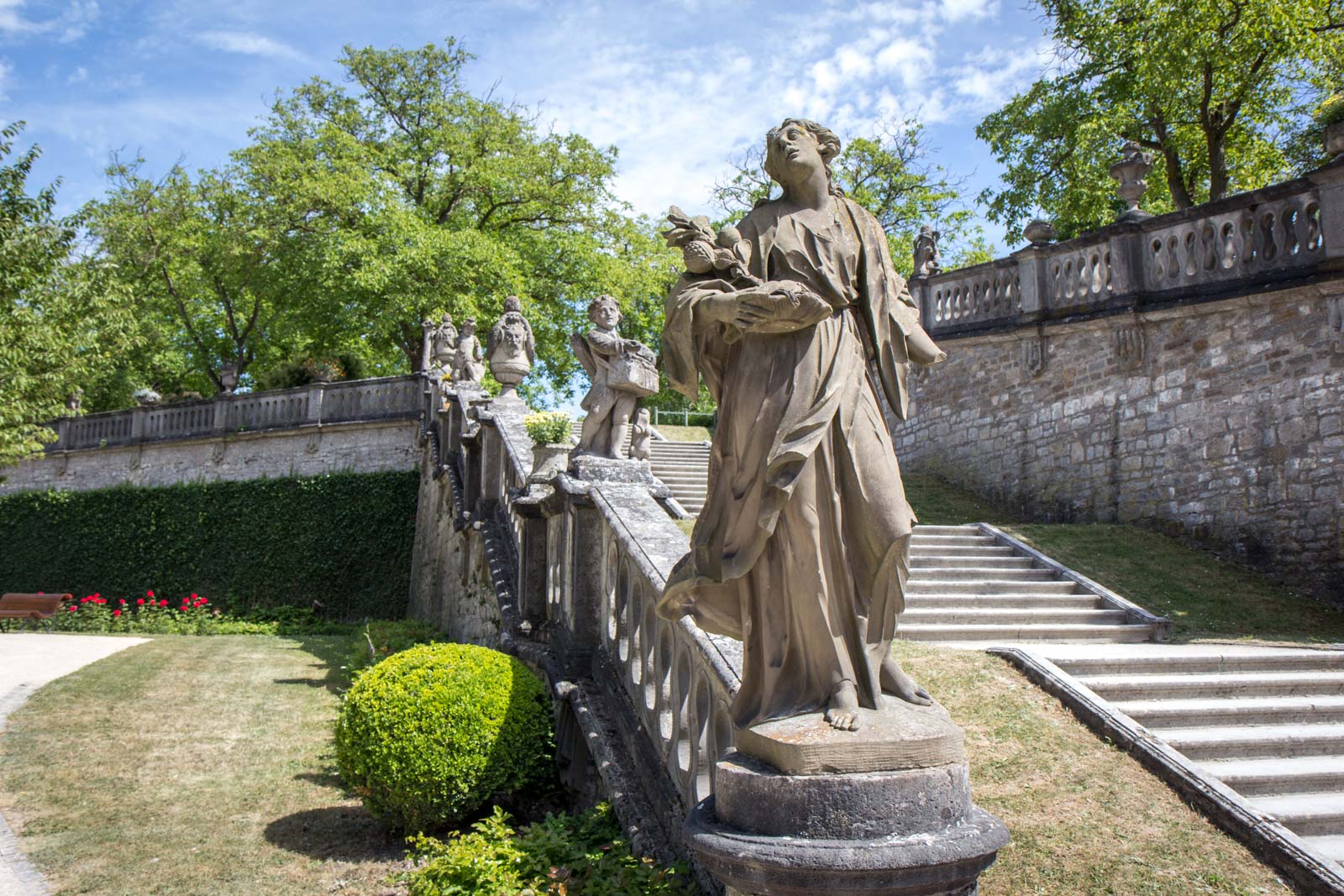 Make sure you leave time to walk through the beautifully landscaped sections directly behind the main building and walk up to the top of the gardens. There’s a wonderful symmetry that’s easier to appreciate from the higher ground and the incline is part of the aesthetics.

The Würzburg Residence is located at:
Residenzplatz 2, 97070, Würzburg, Germany.
You can see it on a map here.
The Würzburg Residence is open at the following times:
April – October: 0900 – 1800
November – March: 1000 – 1630
An entry ticket to the Würzburg Residence costs €7.50 for an adult.
A concession costs €6.50.
Admission to the Court Chapel and Gardens is free.
To get to the Würzburg Residence, catch the train to Würzburg. It is an easy 20 minute walk from the station.
For a good budget option, I would suggest the cool Babelfish Hotel with a roof terrace.
If you're looking for something mid-range, then Hotel Brehm, is one of your best options.
For a very modern hotel that's comfortable and cool, I would suggest GHOTEL hotel & living.
And if you want to splurge, you can't go past the majestic Schlosshotel Steinburg with amazing views.
Make sure you leave yourself enough time to see the gardens properly – they are a beautiful addition to a trip to the main building.
You can find out more information at the official website for the Würzburg Residence.