Above ground, the English city of Newcastle is changing. The symbols of industry have shifted from the practical to the nostalgic.

The ports, the mining, the shipbuilding, the manufacturing – it all once defined this northern centre.

But now Newcastle is building a new reputation represented by a modernisation of the shells leftover from the bust of the industrial boom.

Good examples are everywhere – such as the Baltic Centre for Contemporary Art in an old flour mill building on the Tyne River. One of the areas where this modernisation is particularly flourishing, though, is in the Ouseburn Valley.

It’s just a few minute’s drive from the centre of Newcastle although good bike paths and a nice walkway along the river make it easily accessible in a variety of ways. 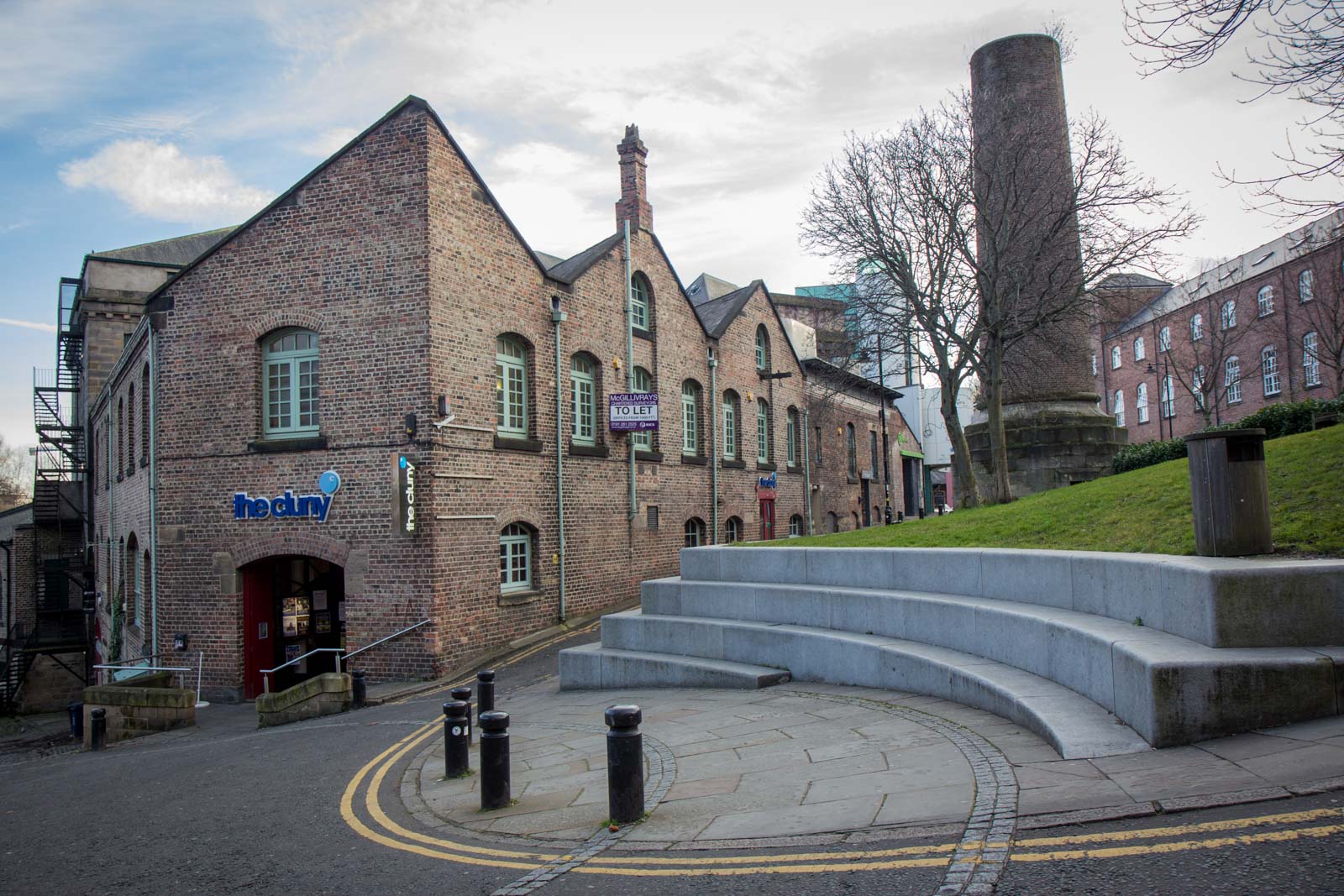 The valley was once the cradle of Newcastle’s industrial revolution but it fell into disuse in the middle of the previous century. Buildings became derelict, the canal once used to transport goods became polluted, and the empty parklands became rubbish tips. But then the artists started to move in. The empty buildings provided cheap and spacious areas for painters, musicians and performers. Colour began to appear in the drab husks of heritage. More recently, with the boom of the technology age, the digital creatives saw the potential in the area.

The interiors of the buildings were redeveloped into modern offices and small digital agencies, boutique architecture firms, shared workspaces and cultural organisations filled up these spaces.

The work going on inside the walls would seem foreign to those who constructed these buildings but the names retain the historical link – The Biscuit Factory, The Mushroom Works, North Grange Glass, Cobalt Studios. 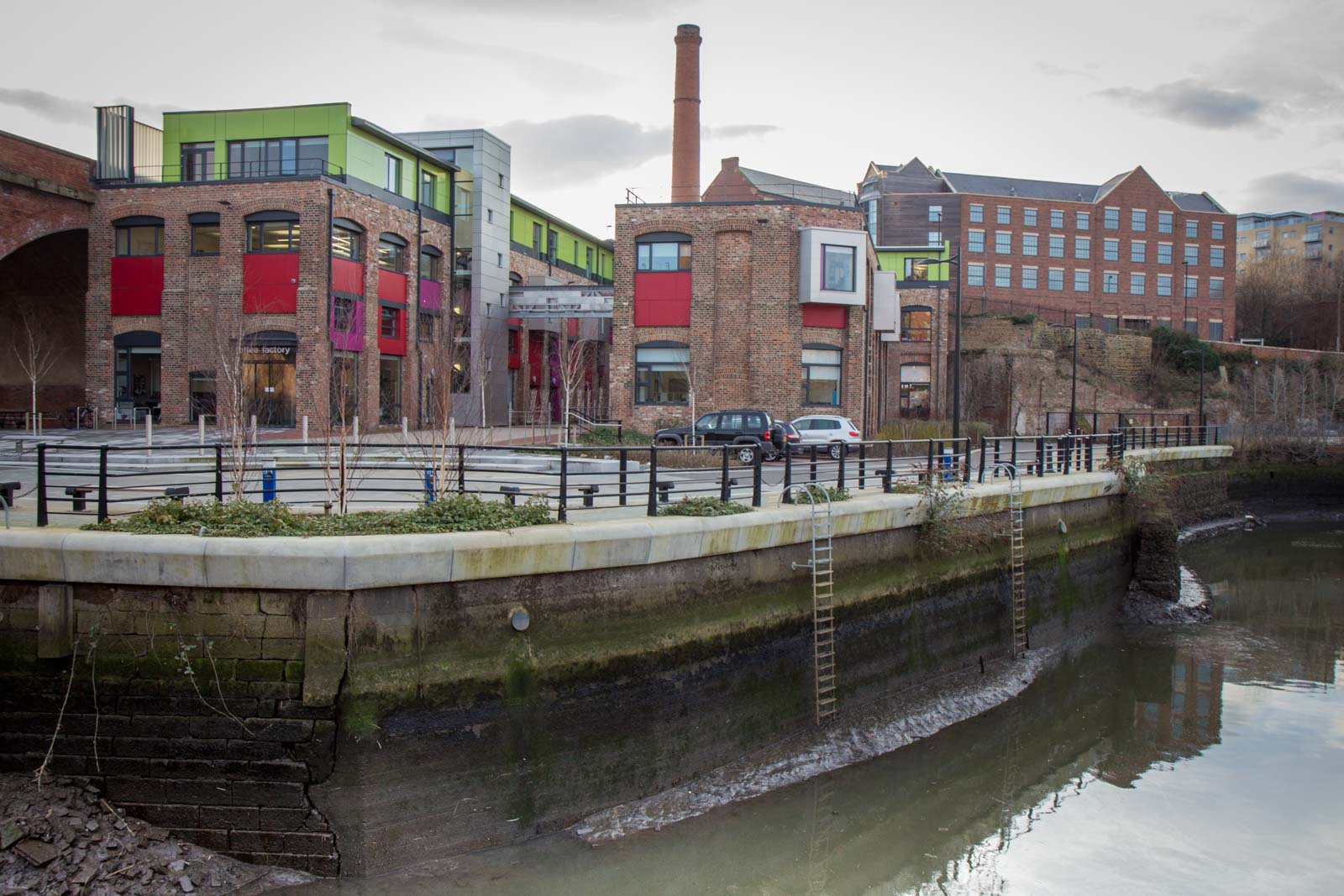 As I walk around the Ouseburn Valley one afternoon, windows into the buildings give me glimpses of young trendy professionals working in the shared spaces.

A boat tied up the side of the canal promotes Seven Stories, the national centre for children’s books.

There’s a community farm with animals and crops…

And construction of apartment blocks on the edges of the area demonstrates the growing popularity of the residential opportunities. Above ground, the changes are pronounced. But below ground, the history runs deep – quite literally.

In one corner of the Ouseburn Valley precinct is a red metal door cut into a wall. Walking past, you might not think too much of it. But if you were to open it and go inside, you would find a passageway to Newcastle’s past. 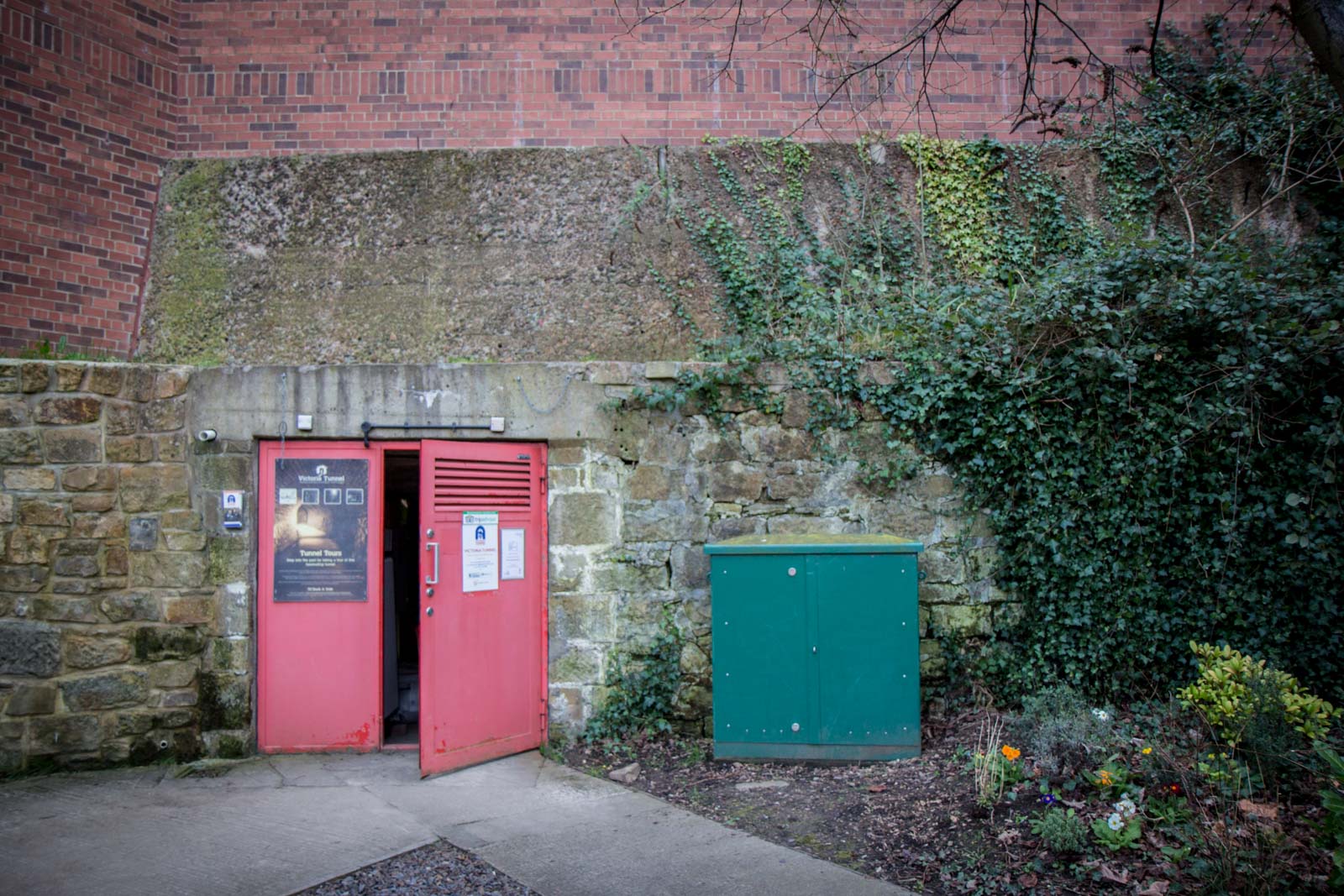 This is one of the entranceways to the Victoria Tunnel, a narrow long passage that stretches for 2.5 kilometres under the city.

It was built in the 1840s to transport coal down to the river. For twenty years, wagons would roll from the top of the tunnel, down a slight incline, laden with coal to waiting boats.

The empty (and much lighter) wagons were winched back to the top.

It was closed in 1860 but stayed untouched. It was so structurally sound that during the Second World War it was used as an air raid shelter for the residents of Newcastle.

Many nights a siren would sound and the war-weary would descend to one of the tunnel entrances and spend the evening below ground.

Can you imagine cowering under the low narrow arch of bricks, shivering from the northern English winter, the sound of bombs exploding above you? Of course you can’t. Luckily most of us alive today have not experienced that. But several years ago the tunnel reopened again – this time for tourists.

It is now possible to get a small taste of what it’s like to be inside this artery of Newcastle which has helped the city survive in more than one way.

The only way to access Victoria Tunnel is through a guided tour, which is run by the non-profit Ouseburn Trust. Although this is becoming a very popular tourist attraction, there is something comforting about how non-touristy it is.

The guides are all volunteers who donate their time because they are passionate about Newcastle’s history. The entrance fees are low and are merely to cover costs (£5 for adults and £2 for children). There are speakers within the tunnel to add some sound effects to replicate the different periods of the site’s story. But other than that, nothing has been done to it.

Each member of the tour is given a hardhat and a torch – luckily. There are no lights in the tunnel so the torch is vital. And the roof is quite low at points so the hardhat is very much appreciated!

Only 700 metres of the tunnel are included in the walk – but that’s more than enough.

It can take a while to shuffle along in the dark and it’s really the stories that make the experience once you’ve seen and felt the tunnel for yourself. The construction is fascinating but it’s the history that’s most interesting. In some ways, it reflects what is happening above ground. A piece of infrastructure built for the coal industry was adapted almost a century later to respond to the needs of the community.

In the case of Victoria Tunnel, it was as protection during a war. For the rest of the buildings around its entrance here in the Ouseburn Valley, it’s to survive another crisis – a financial one.

Above ground, the English city of Newcastle is changing. With the times.

How much does it cost to visit Victoria Tunnel?

Victoria Tunnel costs £5 for adults and £2 for children.

When is Victoria Tunnel open?

Where can you organise a tour?

You can book tickets by heading the Osbourne Trust website.