The small little white structures dot the hillside, their conical stone roofs rising up above them. From a distance, looking across to the community of buildings, they seem like a mountain range spotted from the air. Rising ragged but with a system, they could be the Andes or the Alps. 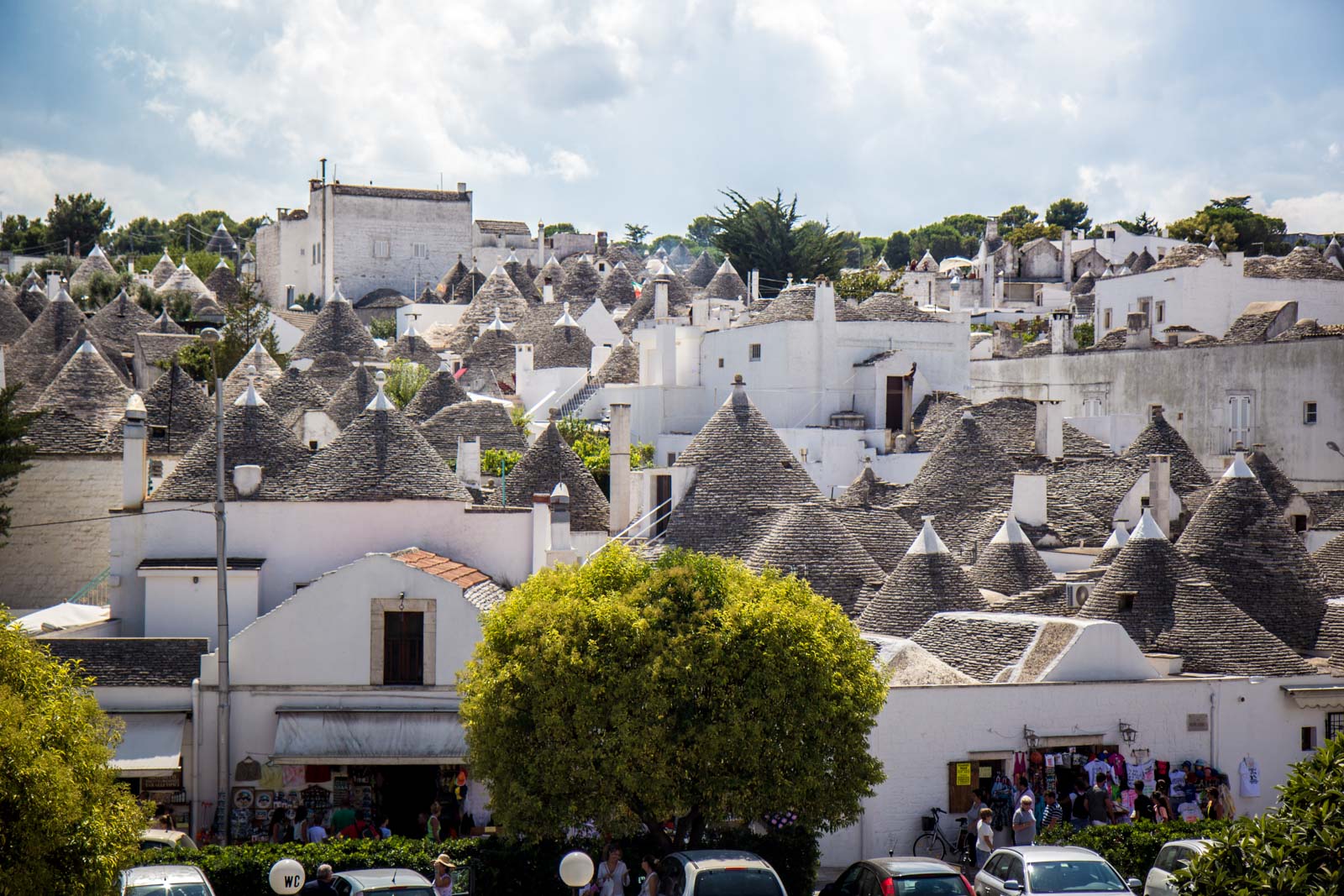 But these odd shapes are the work of man, not nature. They are called trulli (the plural of trullo), and they are the traditional residences of the town of Alberobello, here in the Italian region of Puglia. 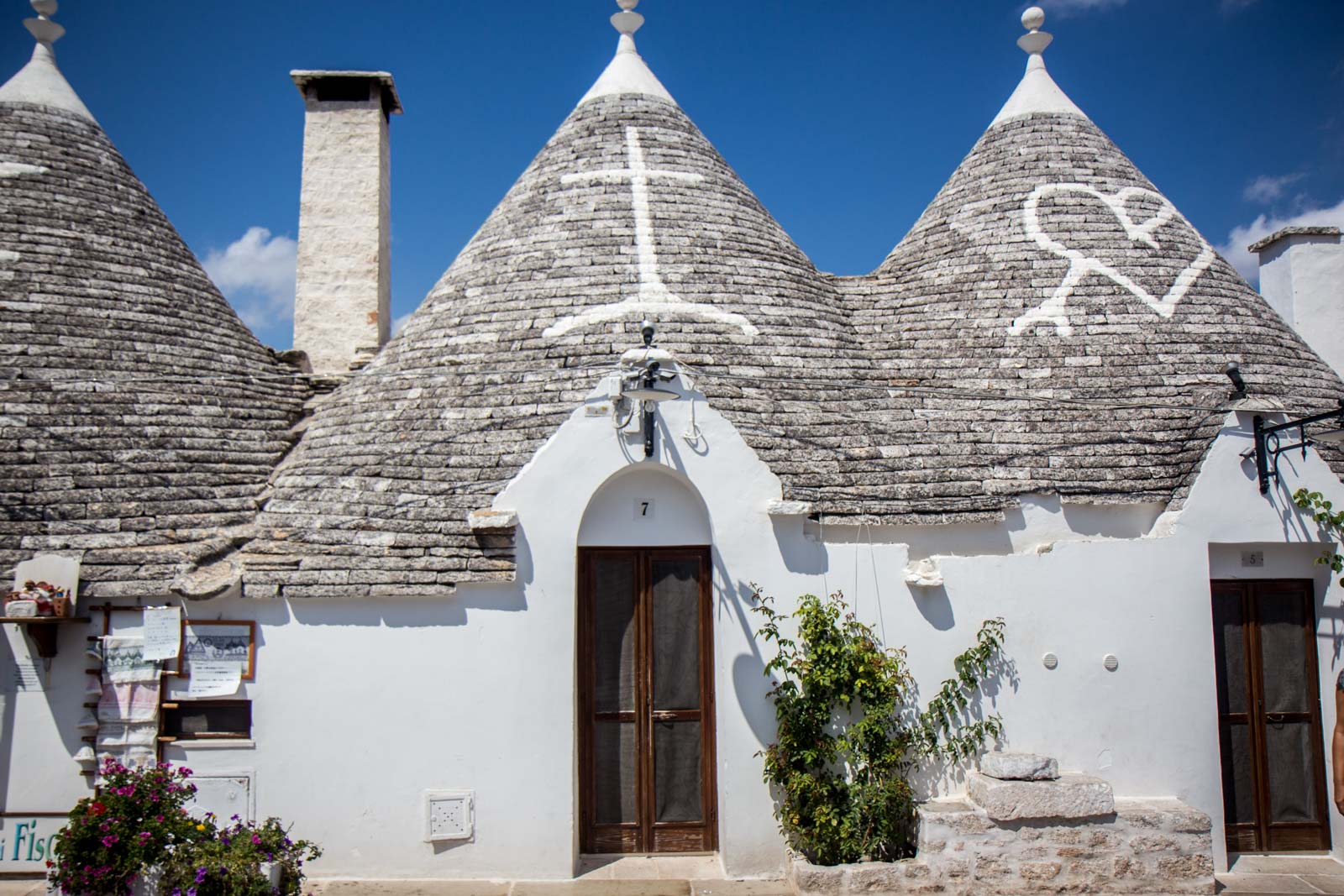 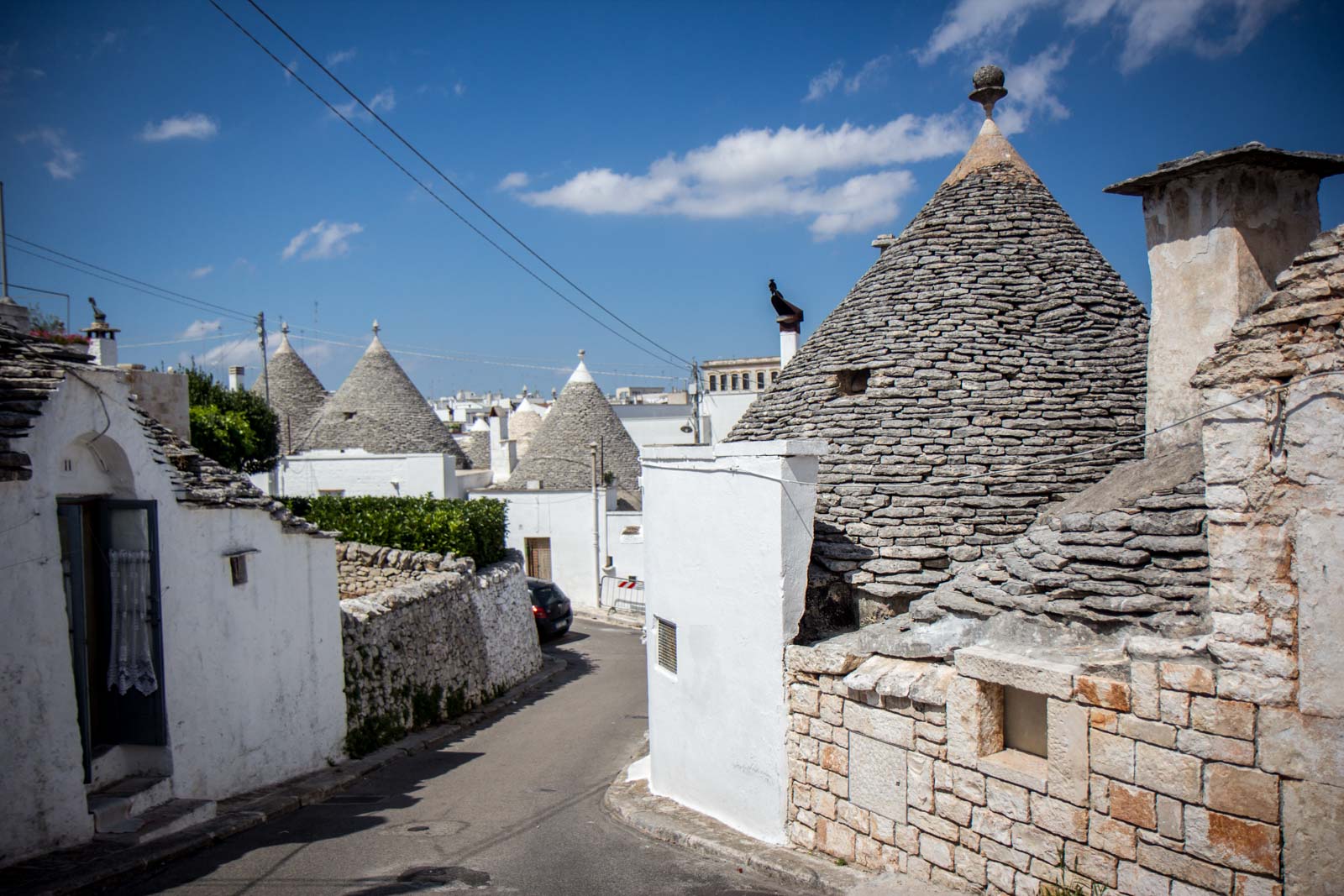 It was in the 1500s that the first of these trulli were built on this land. Archaeological evidence suggests there were only about 40 then but within a couple of centuries there were more than 3,500.

It made sense that people so long ago would build houses like this – there was readily available limestone nearby and it could be used to quickly construct these structures. Although they are simple and look primitive, they are actually quite clever.

There are two layers for the walls, to provide insulation; the roof has a gutter system that collects rainwater; and fireplaces and ovens could easily be made within the walls in a way that was safe. 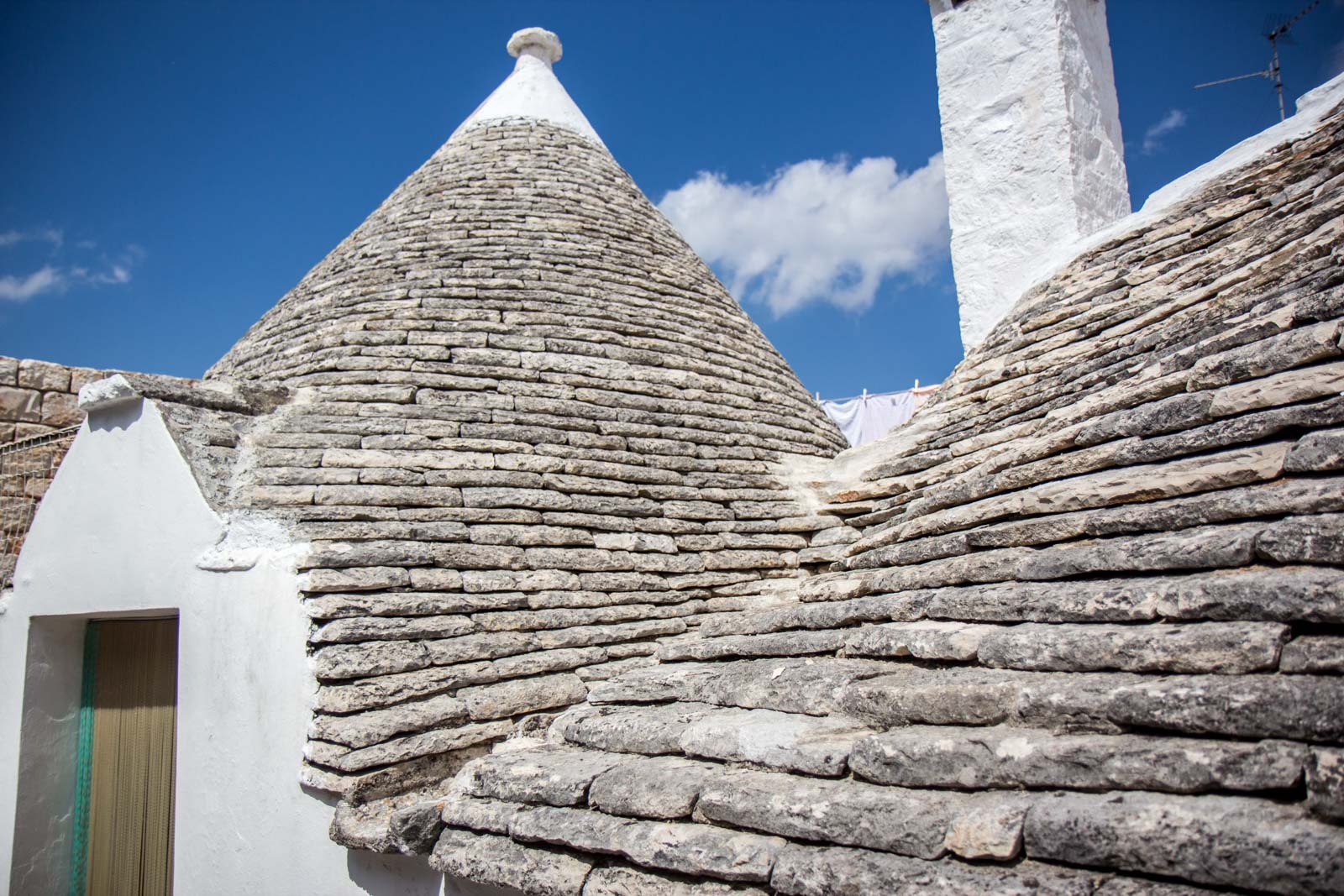 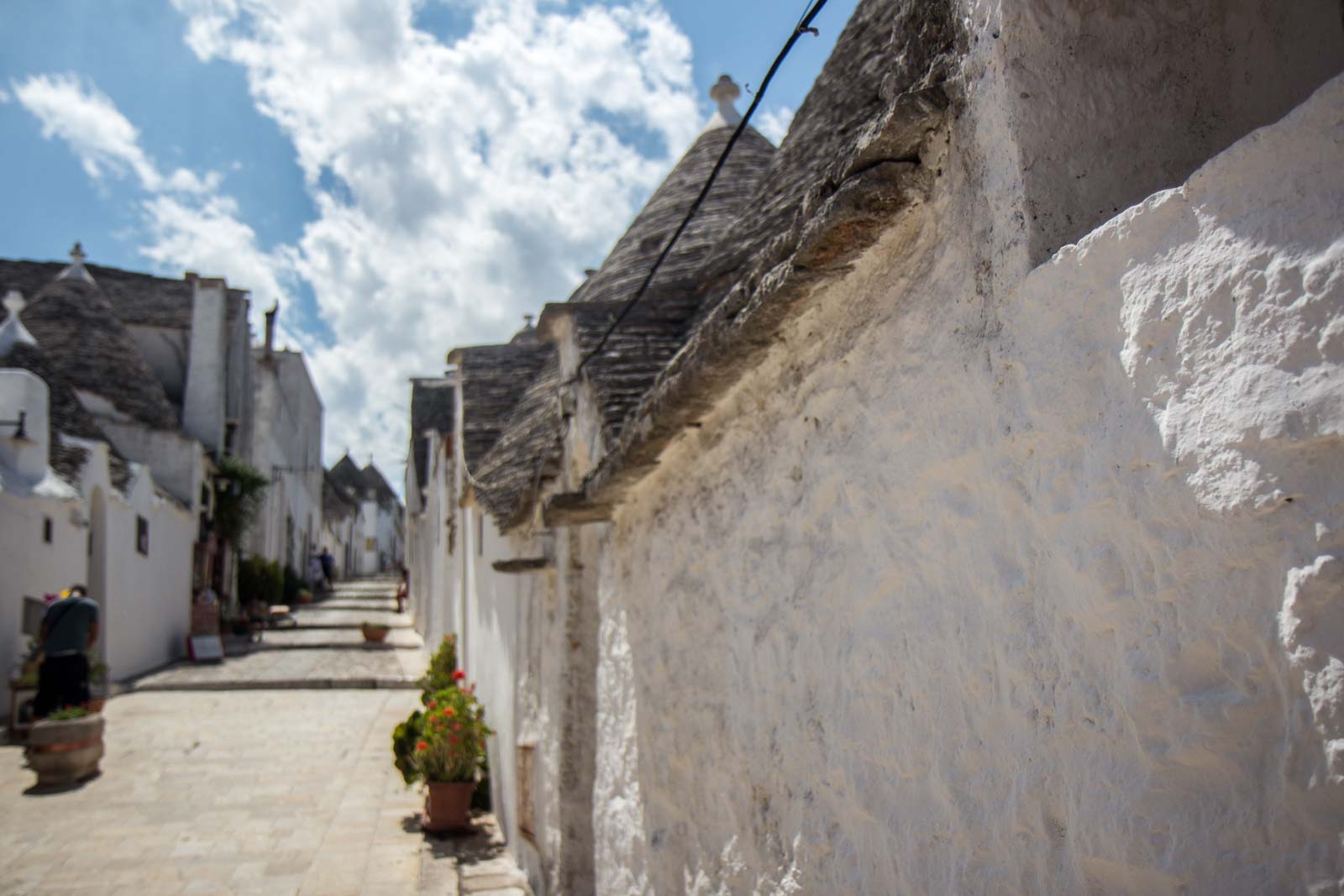 And that’s why, even today, they remain. It seems odd at first that anyone would want to live in such a basic stone hut when there are such modern alternatives available but most of them are occupied in some manner.

This is not a historic site, not a walk through remnants of a long last past. No, this is still very much a part of the local culture.

This local culture, however, is supported these days mainly by tourism.

The trulli in Puglia

Puglia generally is less touristy than its northern Italian counterparts like Tuscany or Emilia-Romagna but certain sites within the region are becoming ‘must-sees’ for those who do visit. The tour buses of foreigners have pretty much all included Alberobello and its trulli in their itineraries. 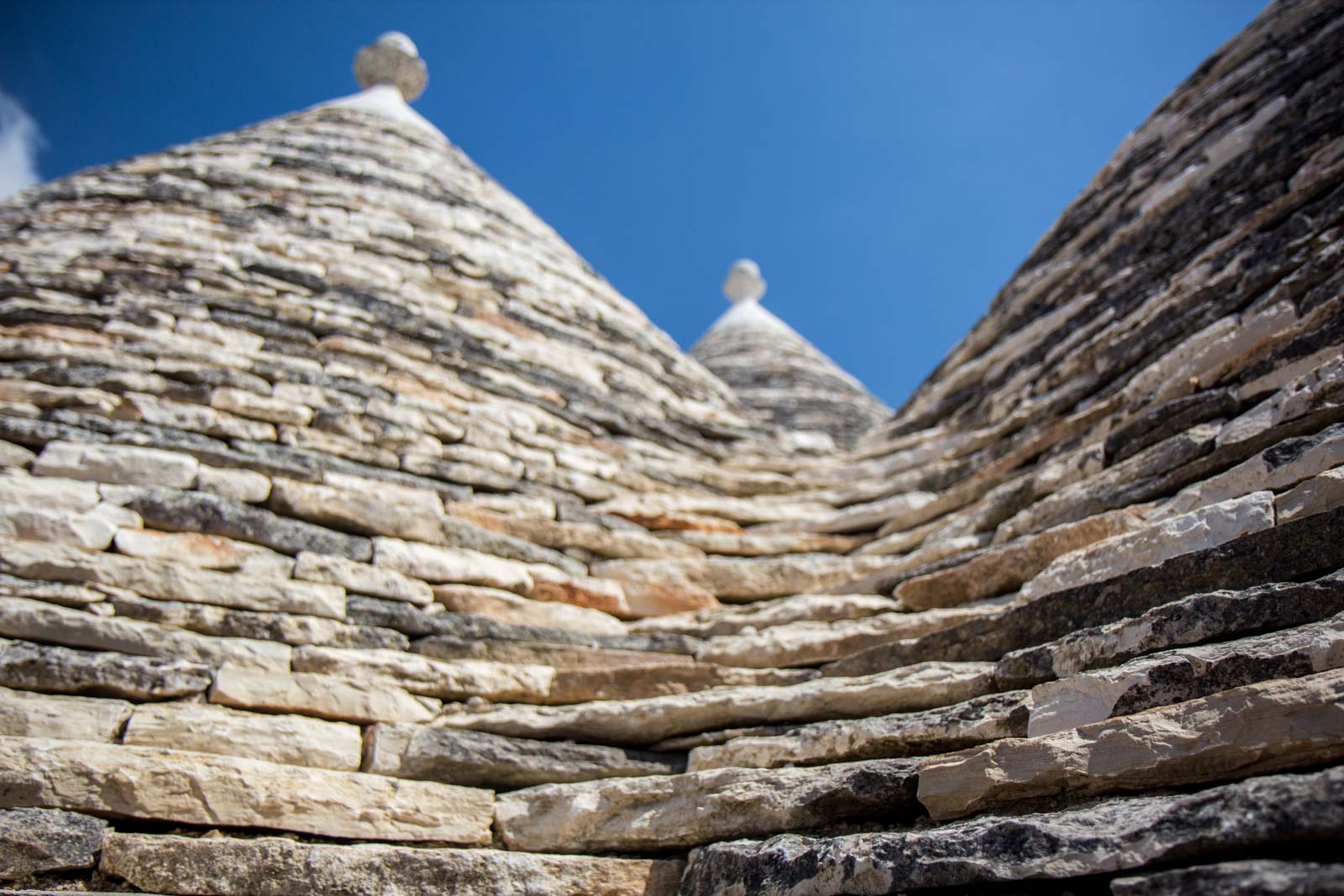 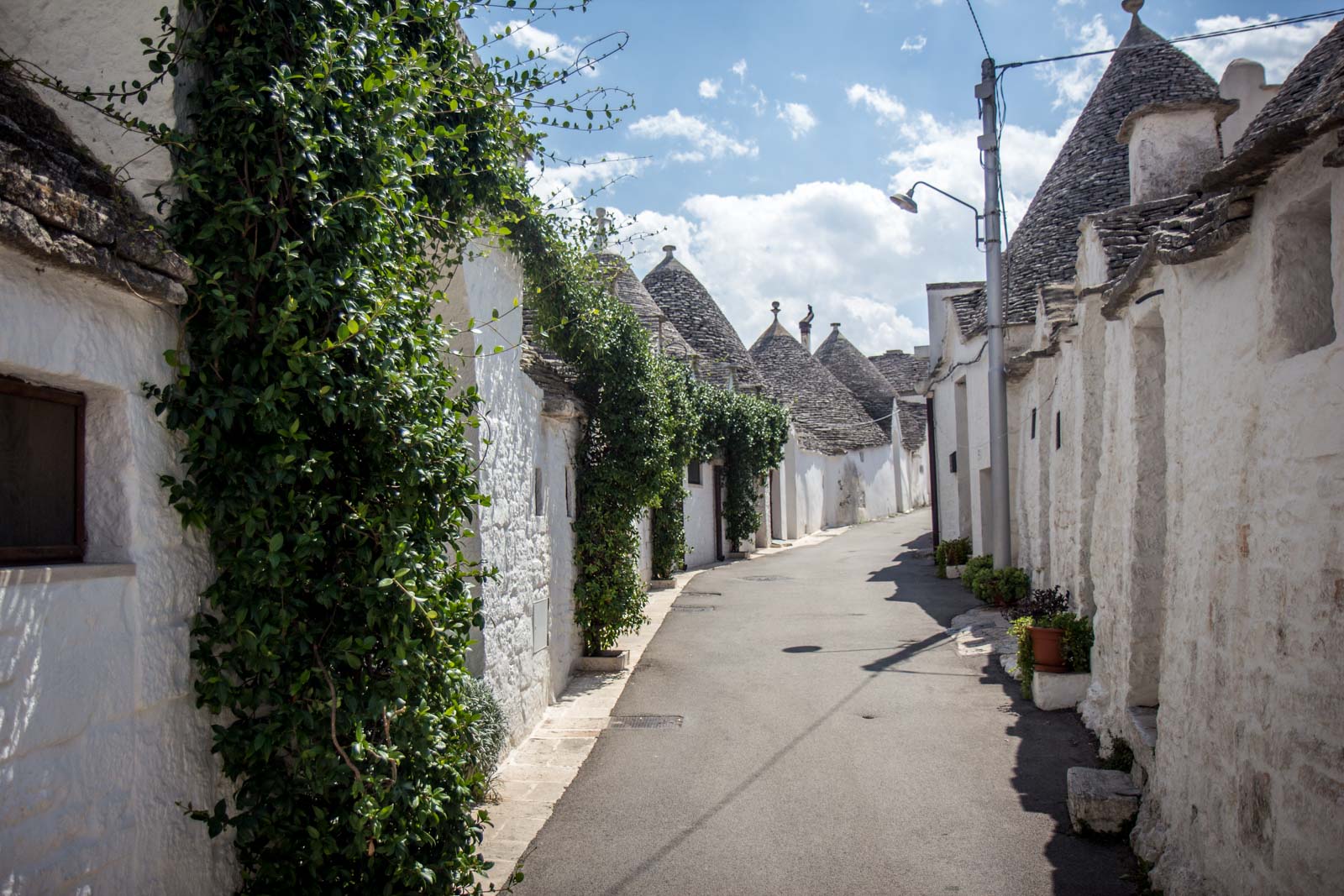 So the narrow paths between the houses are now full of visitors either walking with camera in hand or posing in a doorway. Many of the occupants of the trulli along the most popular paths have turned the buildings into shops or restaurants.

Thankfully most of the offerings in the craft shops are quite nice and tasteful and the restaurants mainly offer authentic and reasonably priced meals. You can’t blame the locals for wanting to take advantage of the influx of tourists but they don’t appear to have sacrificed the heritage in the process. 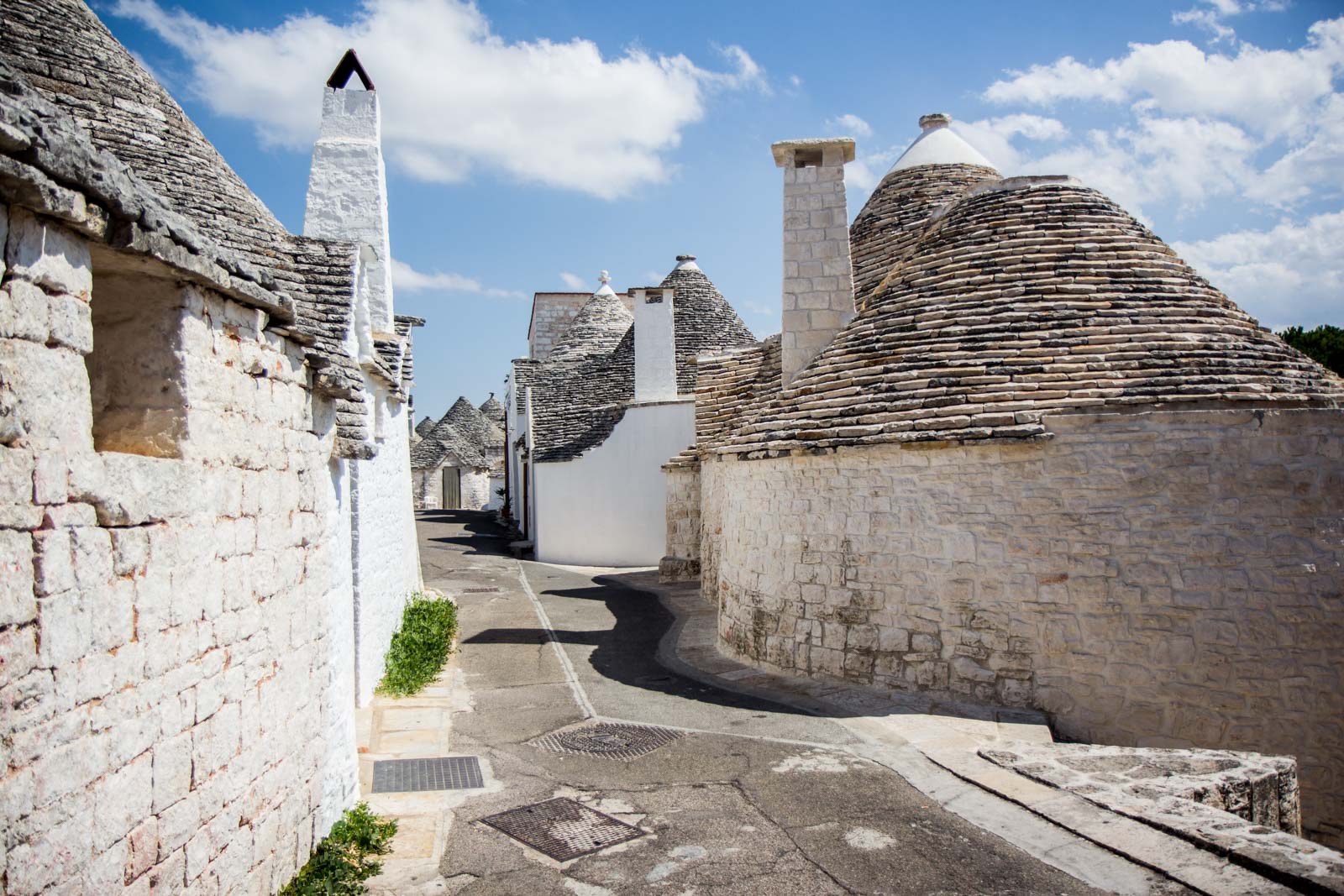 I would be curious to know how much of the business they do in their trulli is declared to the taxman. I say that not because I am concerned about the book-keeping of Italians, but because of one of the more interesting aspects of why this type of structure was popular originally.

They are quite simple buildings to erect because the building process involves no cement – just placing rocks on top of each other. That means they are also quite easy to dismantle.

Centuries ago, when the tax collector was coming from Naples to gather his dues from the locals, they all just took down their houses and so didn’t need to pay anything. 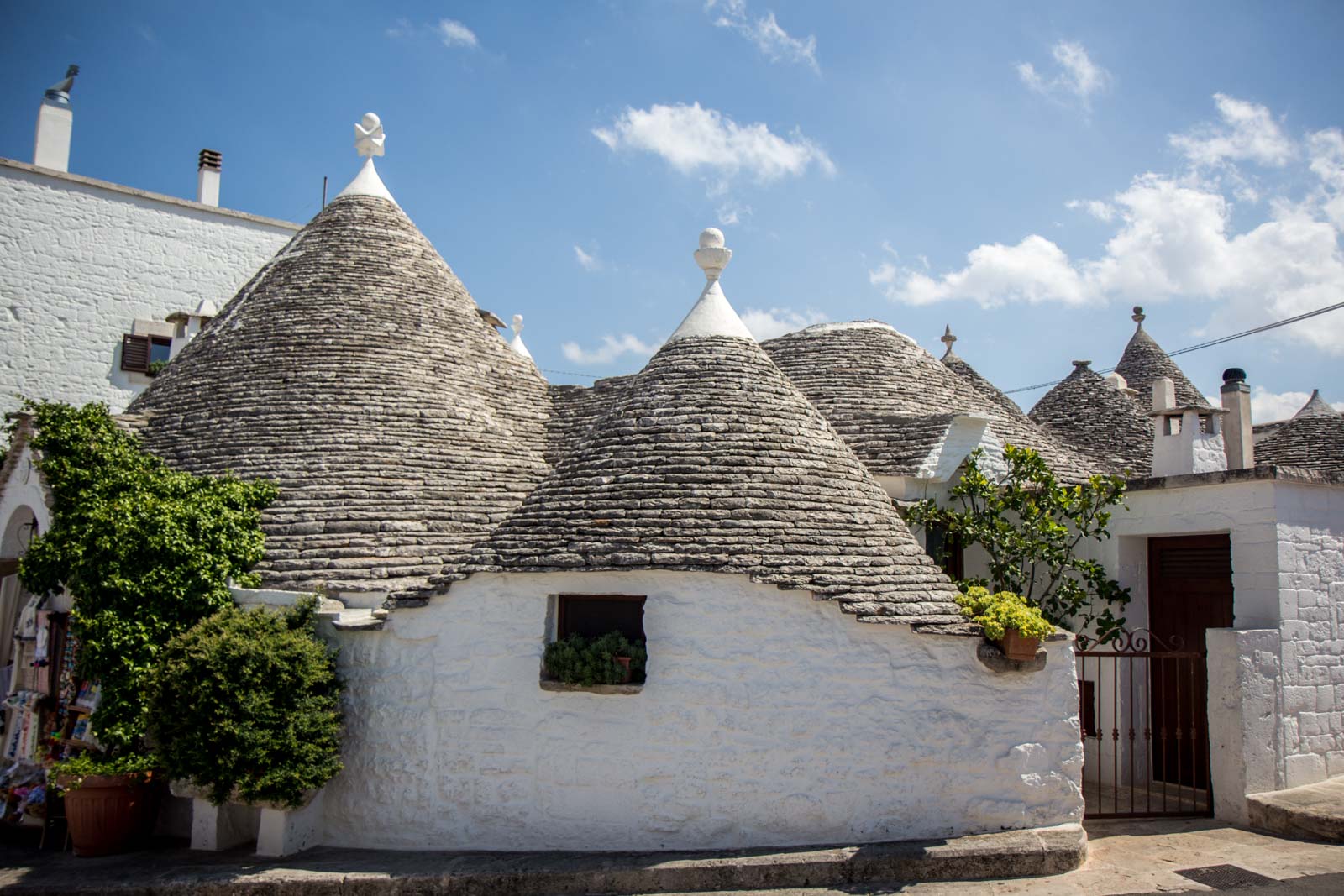 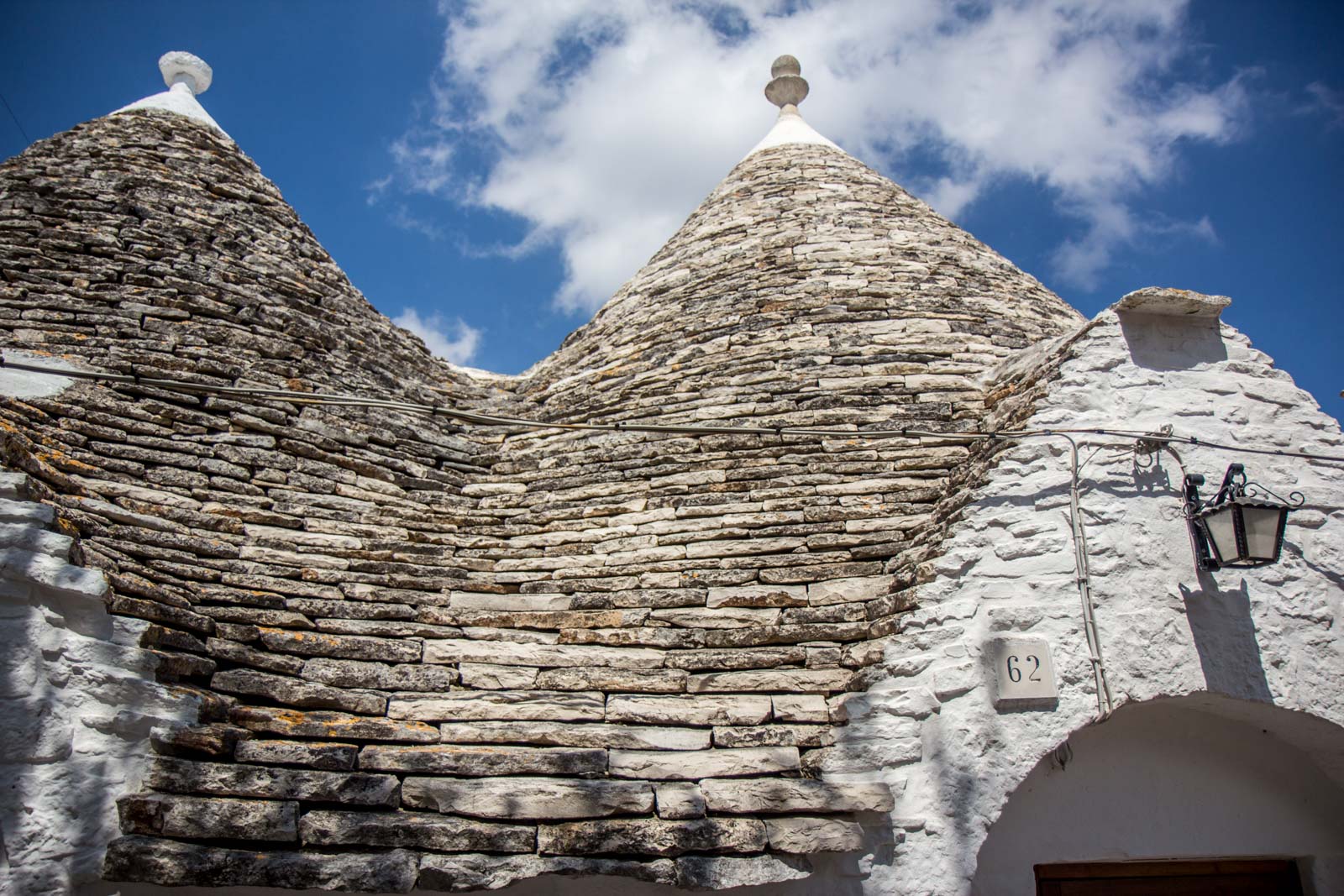 Anyway… there are two main communities in Alberobello where you can see trulli and they are both very close to each other.

The first is called Monti and this is the larger of the two and also the more picturesque. However, this means it is the most popular with tourists and it’s where most of the organised groups are taken.

On another hill on the other side of the main road, is Aja Piccola. The area is slightly smaller but very few of the structures have been turned into shops or restaurants. 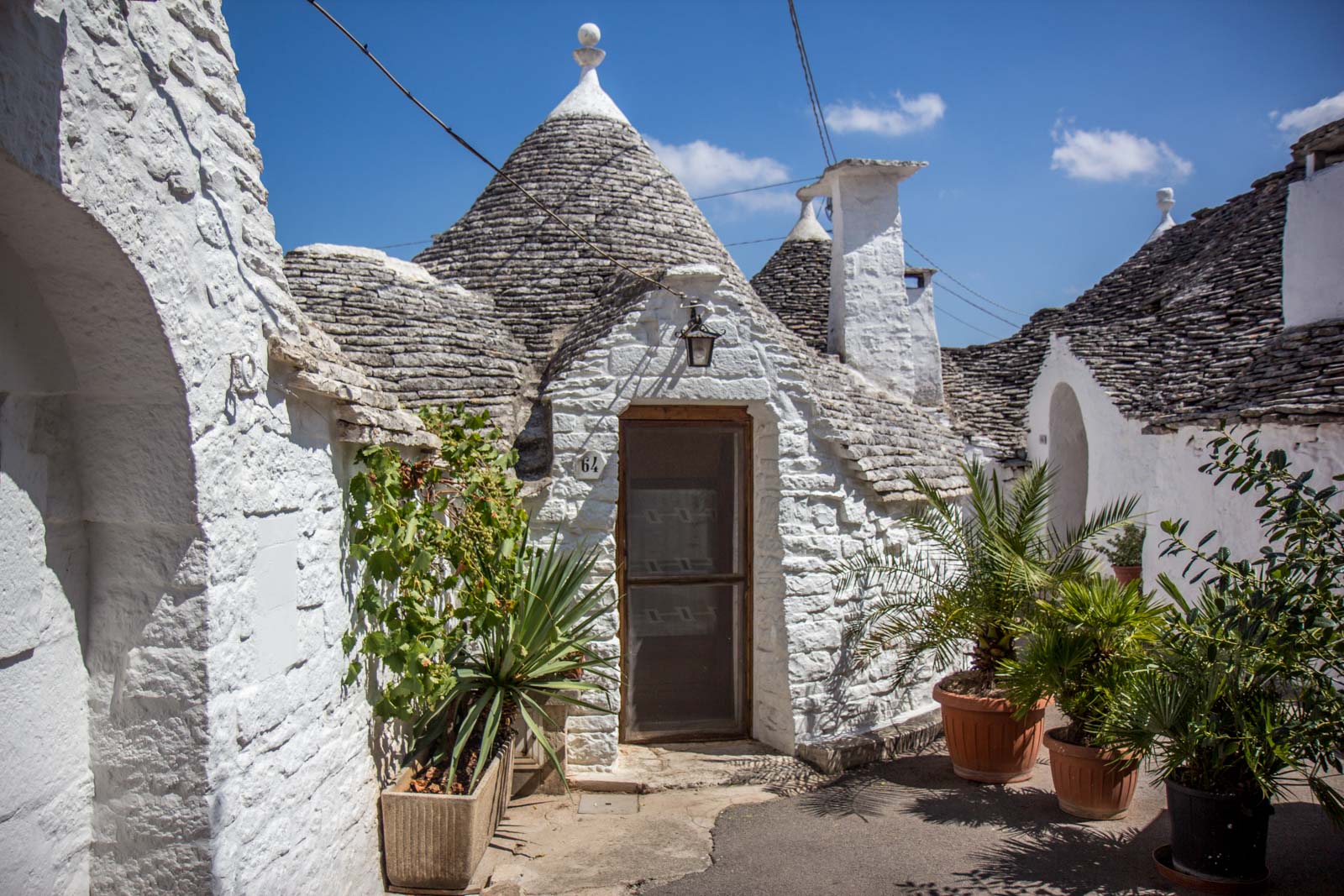 Walking through this area, you’ll hardly see any tourists and you’ll be able to get a much better feel for what this kind of community feels like for the locals.

A guide will also help you appreciate the trulli and show you some local insights. If you’re interested, I would recommend one of the following options:

It is worth visiting both areas and they are just a few minutes walk from each other. I’m not really sure why most people only go to Monti but let’s not complain. It leaves Aja Piccola for the rest of us!

Also, you might want to consider a very special experience and sleep in one of the trulli overnight. If you’re interested in staying in a trulli at Alberobello, I have some suggestions for you here:

For an authentic stay at a budget price, Lunalì is one of the best options.
Another option at a reasonable price is Trullieu Guesthouse.
If you like the idea of a historic mansion, Palazzo Scotto could be the place for you.
And for a special luxurious experience, have a look at Trulli Resort.