The best things to do in Bergamo, Italy

Here’s my suggestion for a perfect itinerary to spend a day exploring the upper old town (the città alta) of Bergamo.

It’s sometimes easy to forget that Venice wasn’t always just a pretty tourist city full of canals. It was once the centre of a great wealthy republic that stretched out across southeastern Europe.

At the height of Venice’s power in the 16th and 17th century, it had enemies on all sides. Not only had it taken part in regional wars, but it had made aggressive expansions in Europe to consolidate its economic position.

So, with rival states looking for ways to bring it down, Venice needed to focus as much on defence as offence. So it began ambitious construction projects to protect the most important assets of the republic.

Today, there are six of these defence works that still exist and have been protected by UNESCO and named as a single World Heritage Site.

Three of them are on the coast of Croatia and Montenegro, where Venice built them to protect ports and sea routes in the Adriatic.

The other three are inland, in Italy, and were designed to protect important outposts of Venice from other European powers.

One of these inland fortifications is in the Italian city of Bergamo, where incredible walls were built to defend the historic centre and its riches. 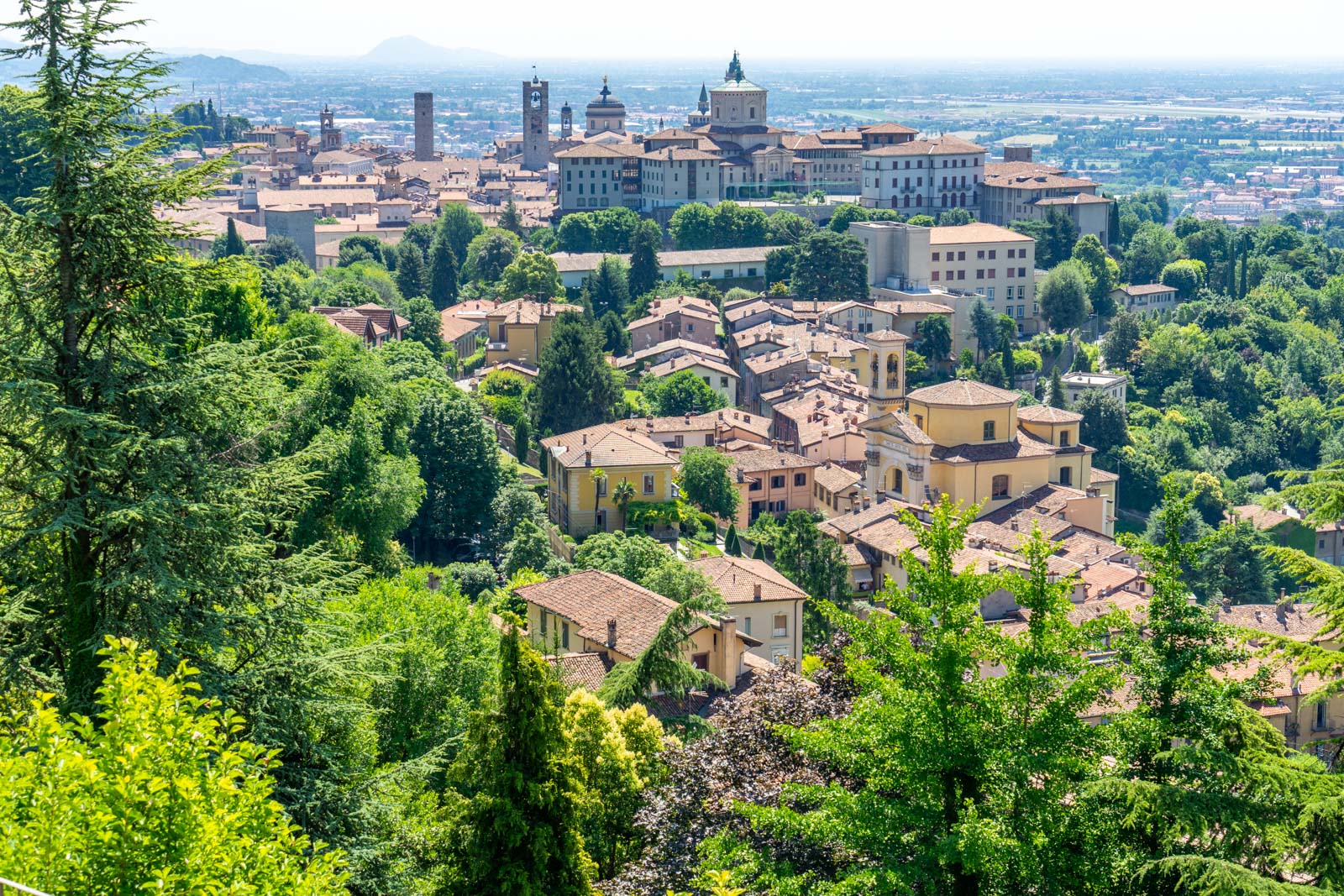 The historic centre of Bergamo

While the historic wealth of Bergamo has always made it an interesting destination for visitors, it has been getting a lot more attention recently and people are realising there’s a lot to see in Bergamo. 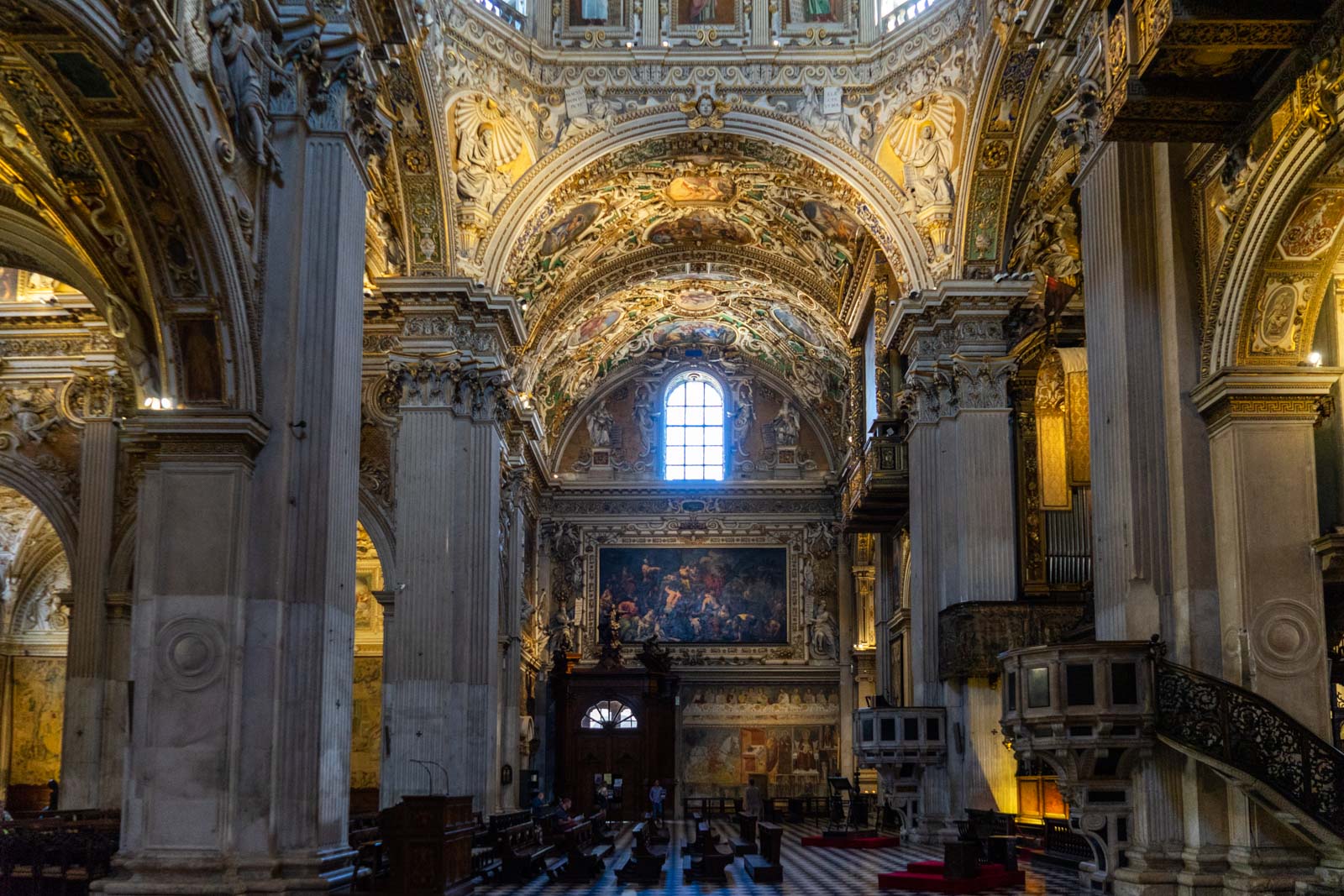 The increase is visitors, though, is mostly because the low-cost airline Ryanair has expanded its flights in and out of the city’s airport, with millions of passengers every year.

Not everyone who lands in Bergamo goes straight to Milan or transfers to a domestic Italian flight. Some stay to explore the city – so now the fortifications aren’t keeping invaders out, as they were intended. They are one of the highlights of Bergamo that are bringing visitors in. 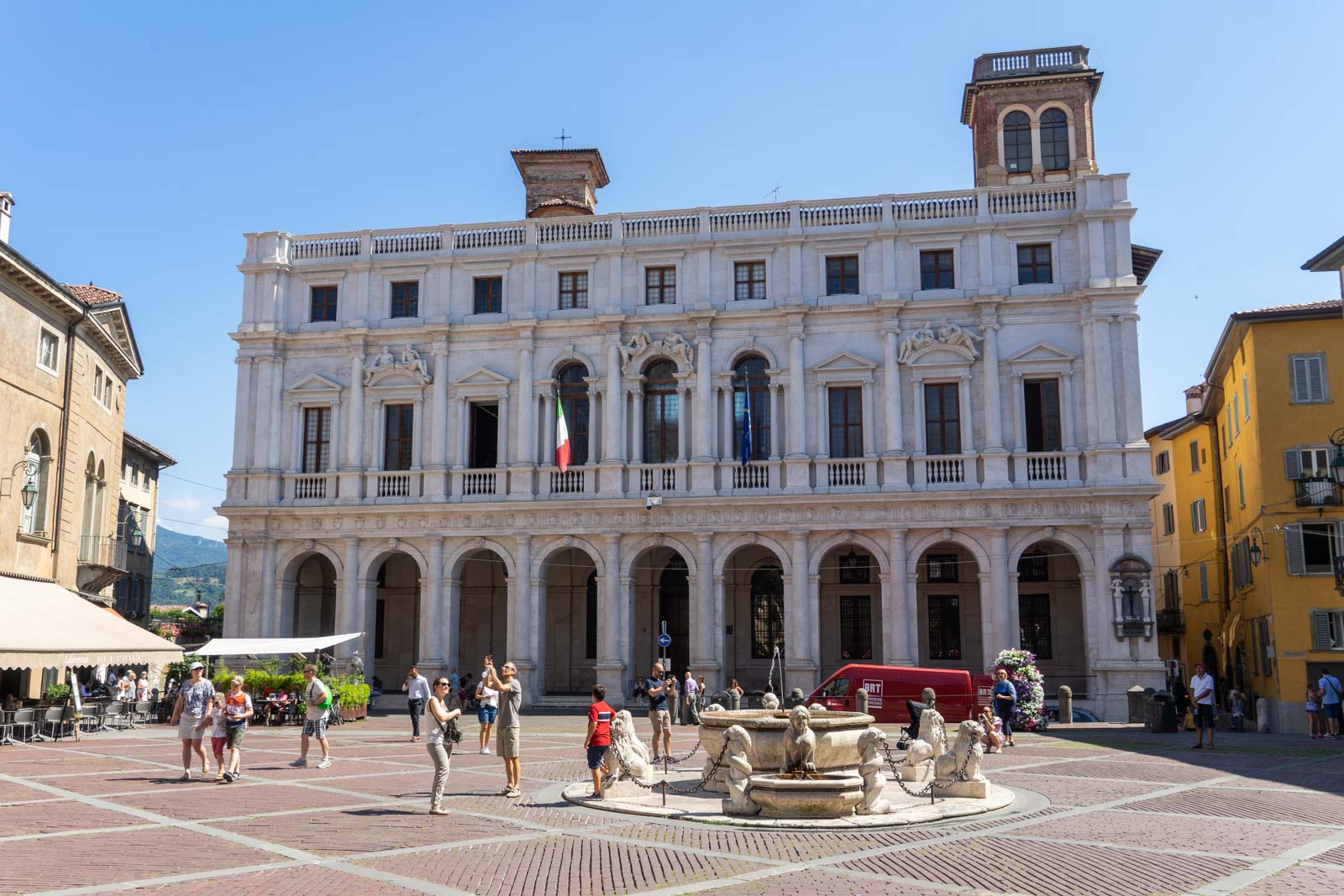 To understand what there is to see in Bergamo, you need to first picture a city with two sections. Most of the city is in a sprawling flat area that stretches out to the north and the west of the airport.

And then, just before you get to a range of hills in the northwest, is the historic part of Bergamo called the città alta, which means ‘high city’. There’s not much imagination needed to see where the name came from – the old town was built up on a hill to add another level of protection. 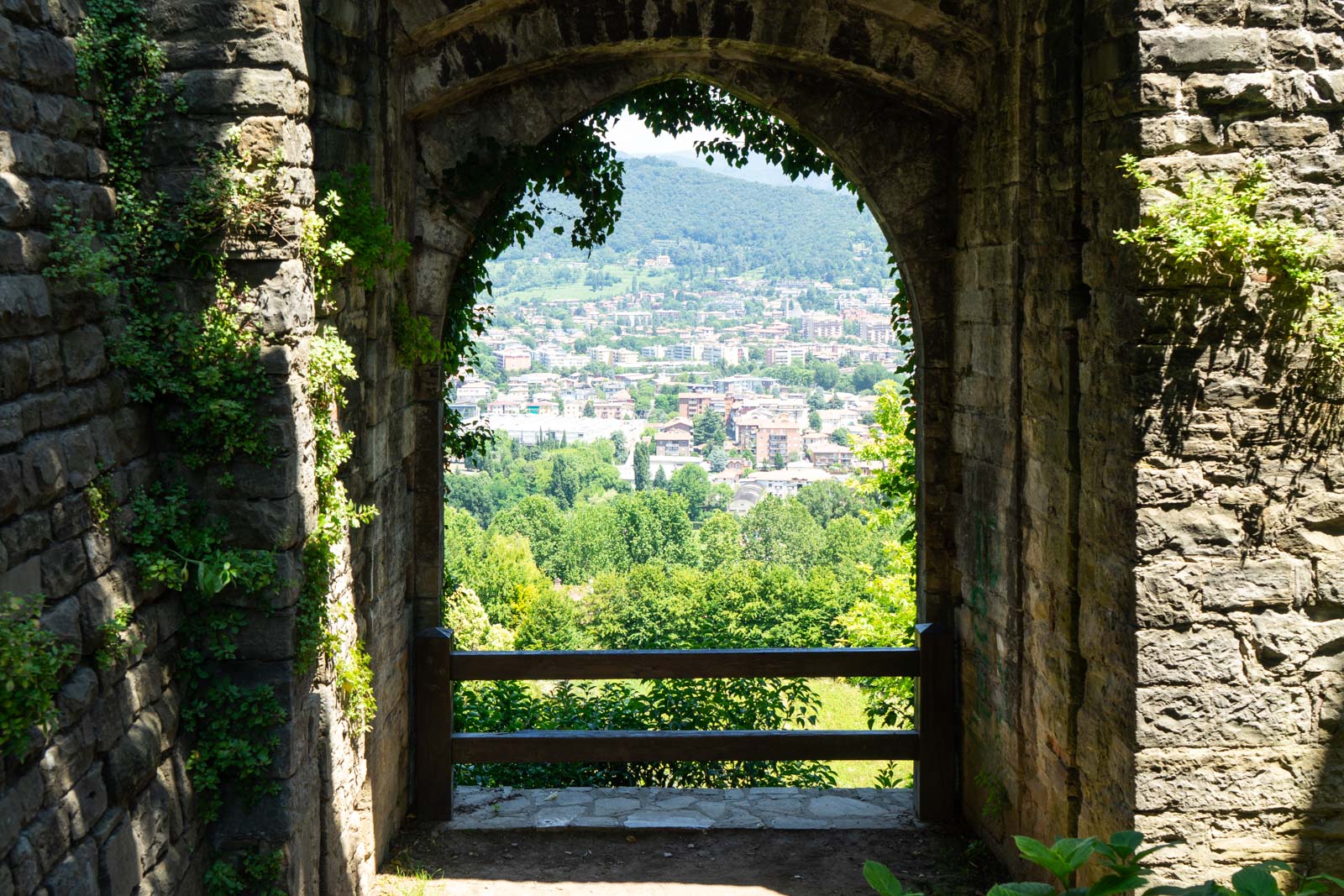 There are some interesting things to see in the lower modern part of the city (which is called città bassa) but, for this itinerary, I’m going to focus on the sights in the historic città alta of Bergamo. This is where the highlights are!

Below, you’ll find a map I’ve put together that shows you all the best things to see in Bergamo that I’m about to mention. I’ve also included a suggested itinerary but feel free not to use the exact route I suggest. The città alta is relatively small and you’ll be able to easily walk between most things.

If you’re using your smartphone, just click on the icon in the top right to open the map in your Google Maps app and all of the markers will load up. Then, as you walk around, you will be able to follow the route.

I’m going to suggest starting at the southernmost of the city gates, Porta San Giacomo. This is the easiest one to walk to from the modern city centre (or train station) and is also the closest from the funicular, if you choose to come up that way (and it does save you a rather steep hike). 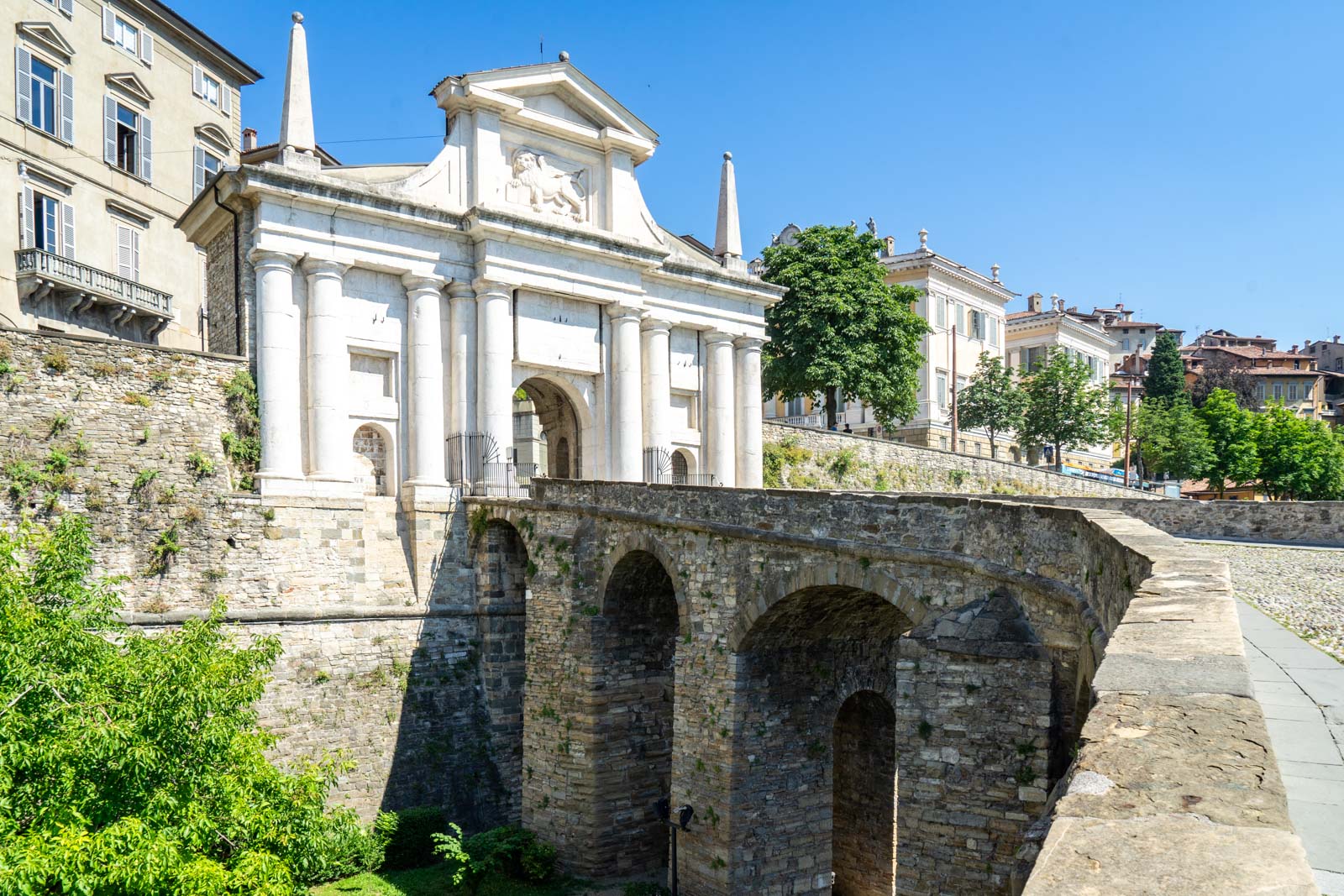 From Porta San Giacomo, you get an amazing view of the città bassa below you. But you can also see a great perspective of the Venetian Walls. 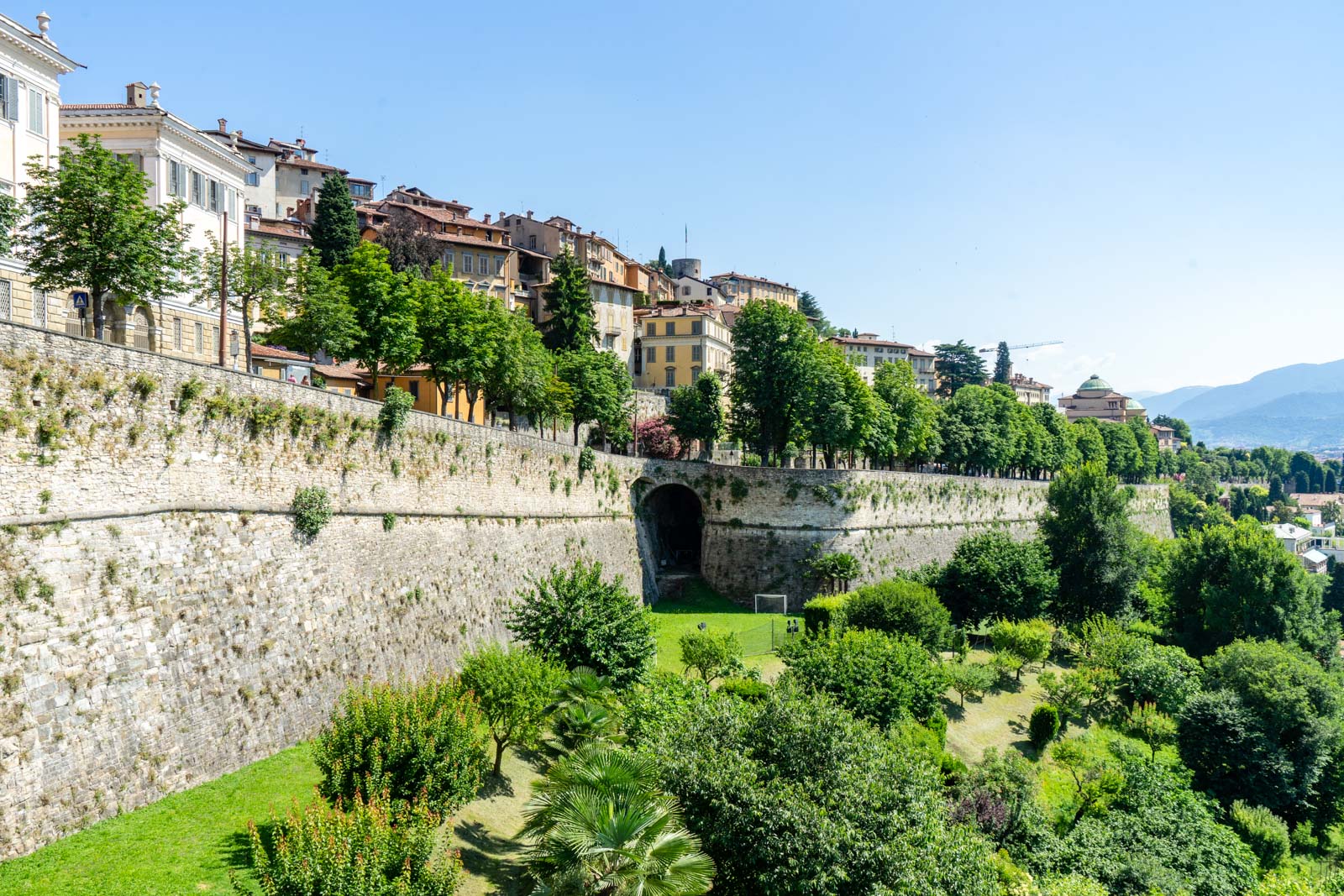 The walls are six kilometres long and there are four gates, each heading towards a particular destination. This gate is the start of the road towards Milan.

From here, you can cut through the back streets and arrive at the Santa Maria Maggiore Basilica. I think this is the most spectacular thing to see in Bergamo and it’s worth visiting before the crowds arrive.

Construction started on the basilica in 1137 and it was significantly expanded in the 1300s. The Romanesque interior was supposed to be entirely covered in frescoes but it has been lavishly decorated in the Baroque style.

If you pass through the basilica and go out the other side, you’ll find yourself at the entrance to the Colleoni Chapel. It’s an incredibly beautiful chapel – both on the outside and inside – which is not surprising. 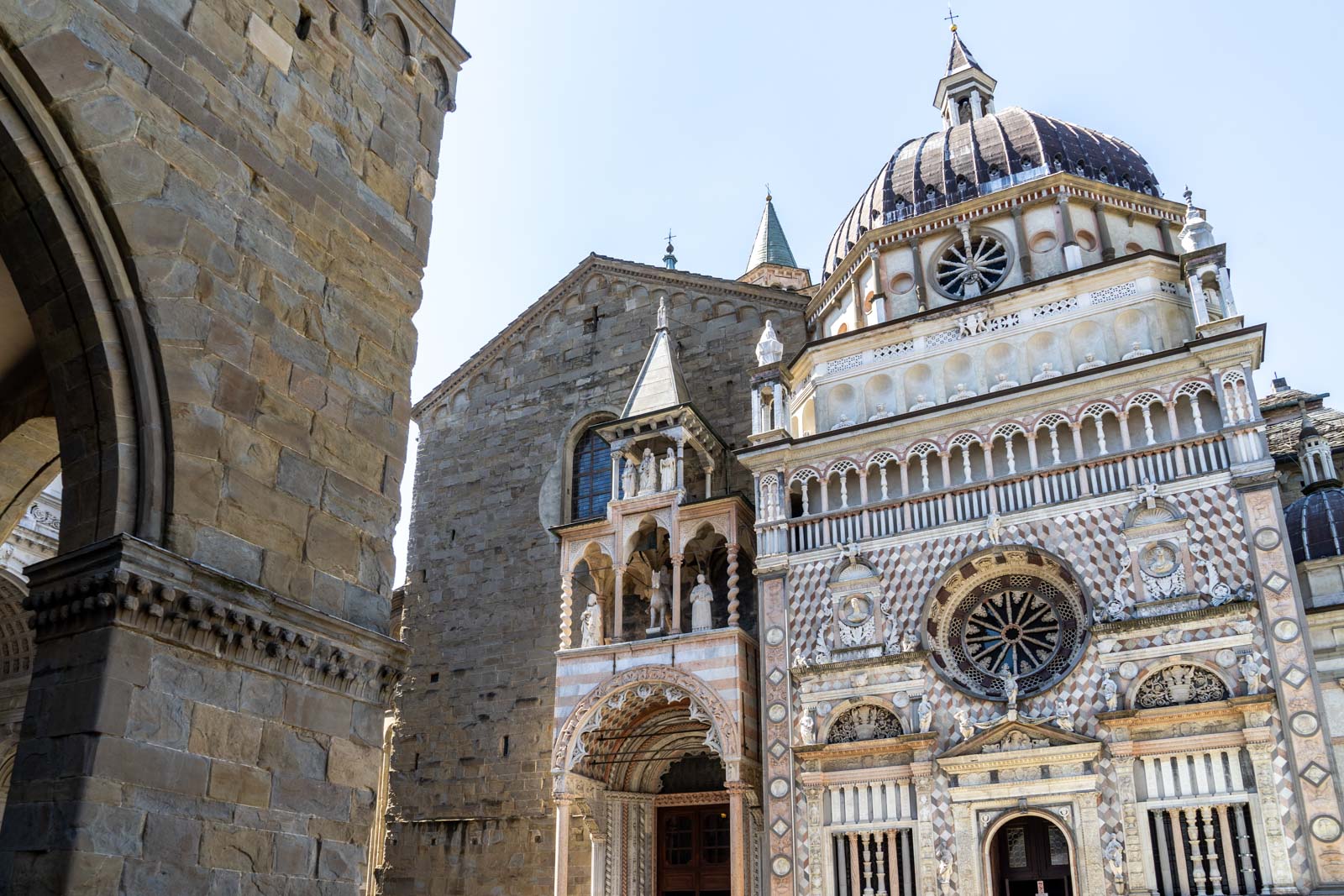 The space was originally part of the basilica but a warlord called Bartolomeo Colleoni demolished it and built his own tomb here in 1470, getting incredible artists to decorate it for him!

From here, you’ll also be able to see the city’s cathedral, although the shape of the building make it less obvious from the outside than you might expect. The cathedral was built between the 1400s and the 1600s and is full of impressive artwork.

There’s also a museum that has a lot of ‘treasure’ as well as mosaics that were recovered on the site from churches that were here before the cathedral.

Head through to Piazza Vecchia and you’ll be in the heart of the historic town. This was the centre of politics and business during Venetian rule and the current design of the square is based on Renaissance ideals.

There’s quite a lot to see here and there are also some decent (but overpriced) restaurants and cafes, if you feel like a break.

The Campanone Tower rises up from the Piazza Vecchia to a height of 52 metres. You can go up in a lift and get amazing views. 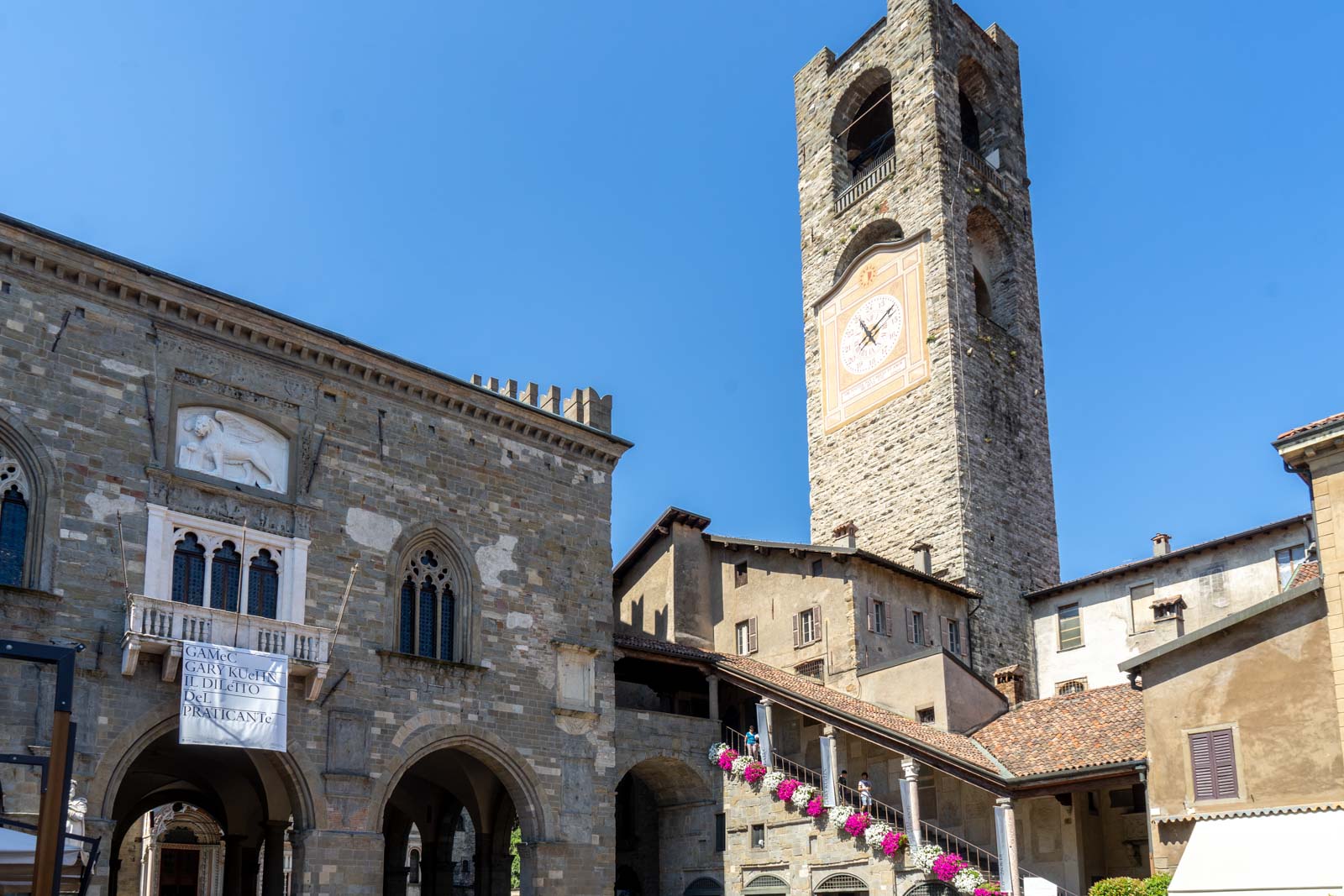 You’ll also be able to see the 12th century Palazzo della Ragione with beautifully-decorated arches, the central fountain, and the Palazze del Podesta.

If you now walk down Via Bartolomeo Colleoni, you’ll find some charming shops and restaurants. There are also a couple of hidden sights here that are worth spotting.

Look out for the Teatro Sociale (Society Theatre) which has a beautiful classic design inside. And you can also pop your head into the Church of Sant ‘Agata Del Carmine.

The Citadel and Civic Museums

The impressive building at the end of the street is the Citadel, a military structure built by the Viscontis and then used by the Venetian captain as his home.

It now has a couple of museums inside – one of natural science and one of archaeology. They may be of interest but you are probably not missing much if you skip them. 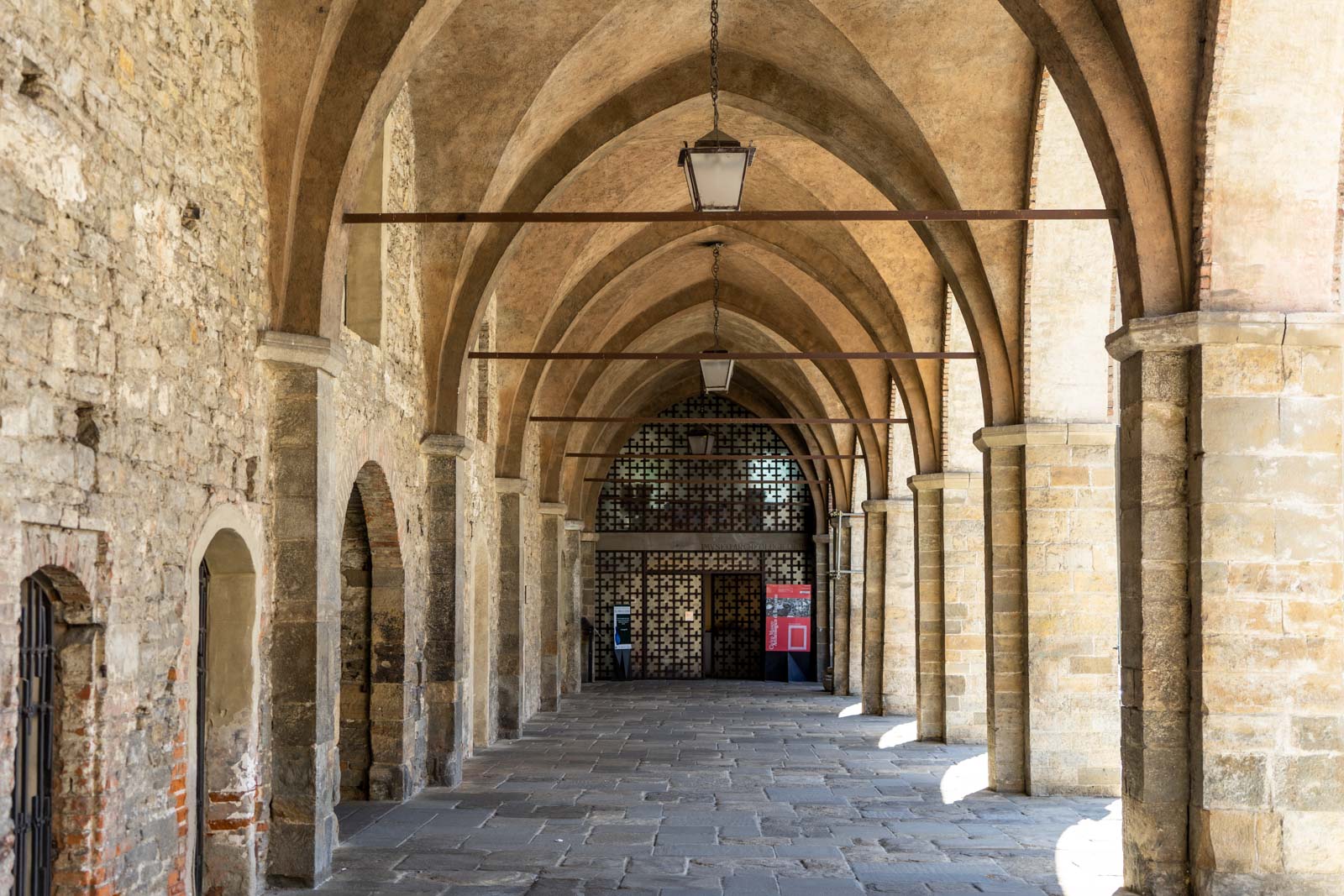 Coming out the other side of the citadel, you’ll find another of the city gates – Porta Sant’ Alessandro, which is the start of the road to Lecco and Como.

From the gate, you can take a short detour up the road to the northeast to find the local botanical garden. It is not very large but it is spread across several terraced layers that you’ll walk up. 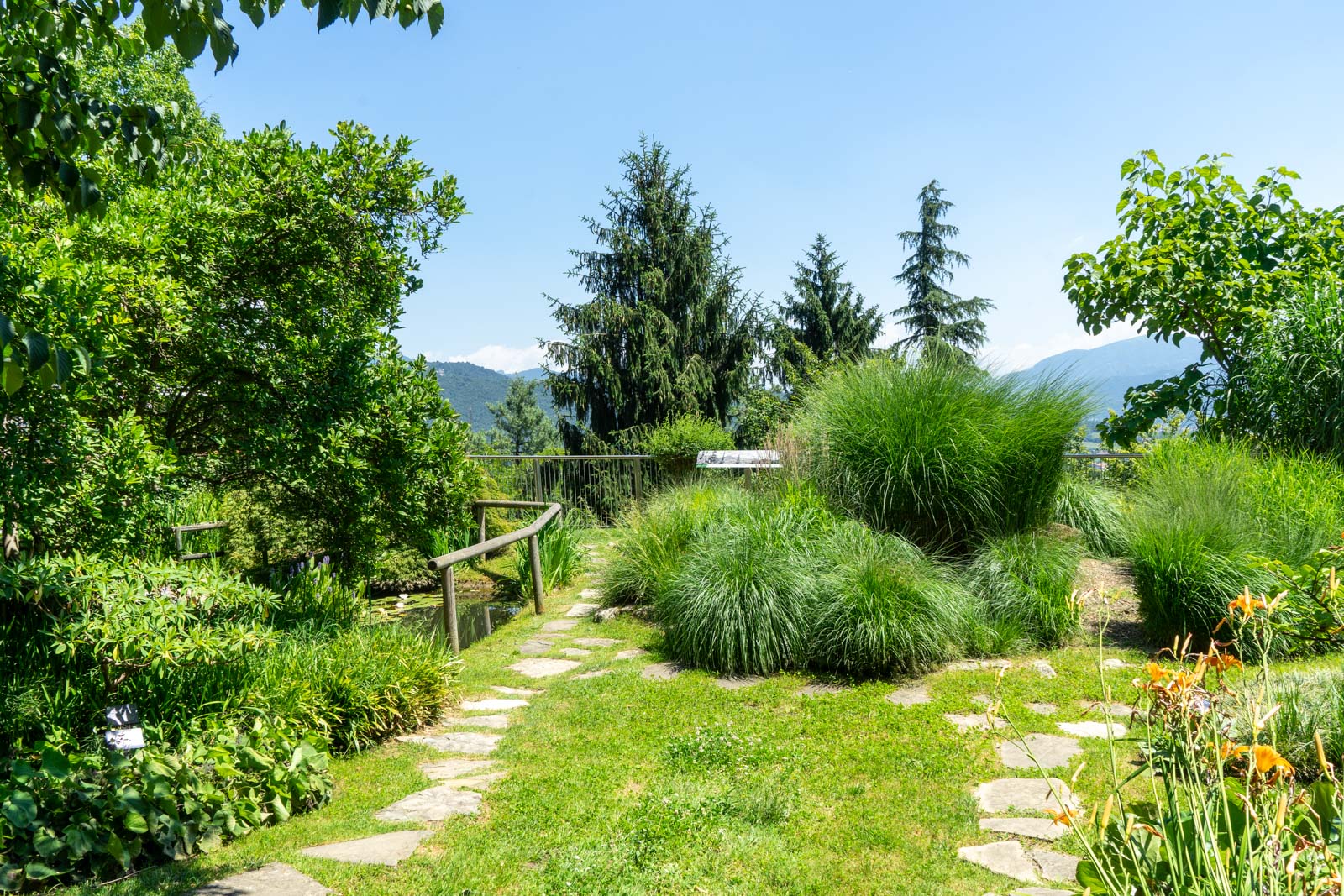 The main area at the top is very peaceful and has been landscaped nicely. It’s a good place to have a rest and have a picnic, for example.

Head back to Porta Sant’ Alessandro and you’ll find a funicular station that will take you even higher above the old city, up into the hills around it.

The funicular goes to San Vigilio, where you can explore San Vigilio Castle. There was a Roman tower here once but this structure is from the 12th century. 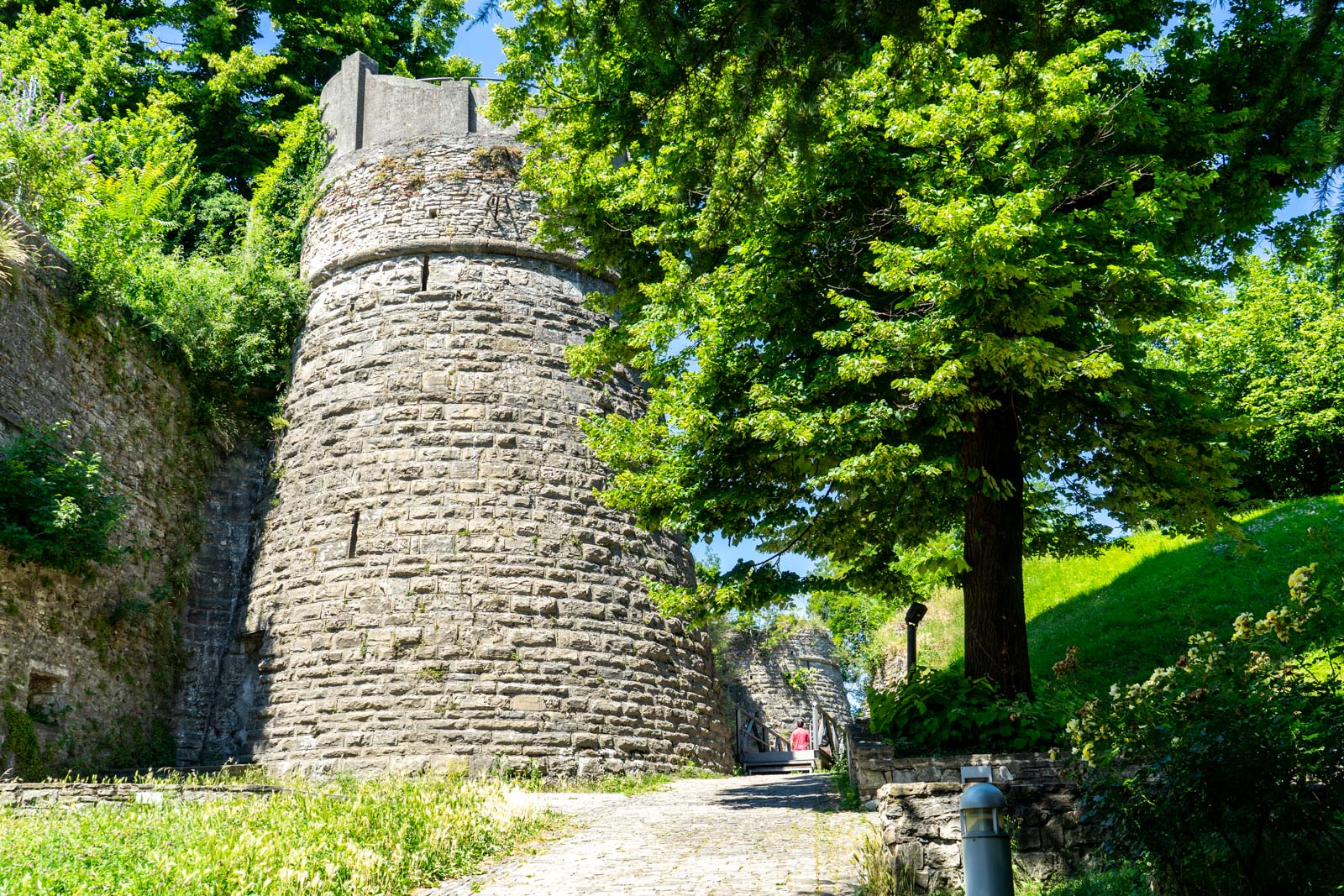 Don’t miss the staircase in the wall that will take you to the top. You get amazing views of the Bergamo Alps from here.

If you go back down the hill, follow the Venetian Wall and then cut back into the eastern part of the old city, where you’ll find the Rocca.

This imposing fortress is from the 14th century and there’s military equipment on display in the garden around it. Inside is a city museum about the 19th century. You’ll get a good view back over the città alta. From here, you’ll be able to see a few other things that you might like to explore if you have time – such as the old Convent of San Francesco.

But from here, it’s easy to get back down to the lower town a different way. Walk through the Piazza Mercato Delle Scarpe, which is a lovely little spot with some nice places to get a drink.

You’ll go past the Saint Andrea Church and then you’ll hit the Port Sant’Agostino gate. From here you just keep walking downhill to reach the centre or the train station. 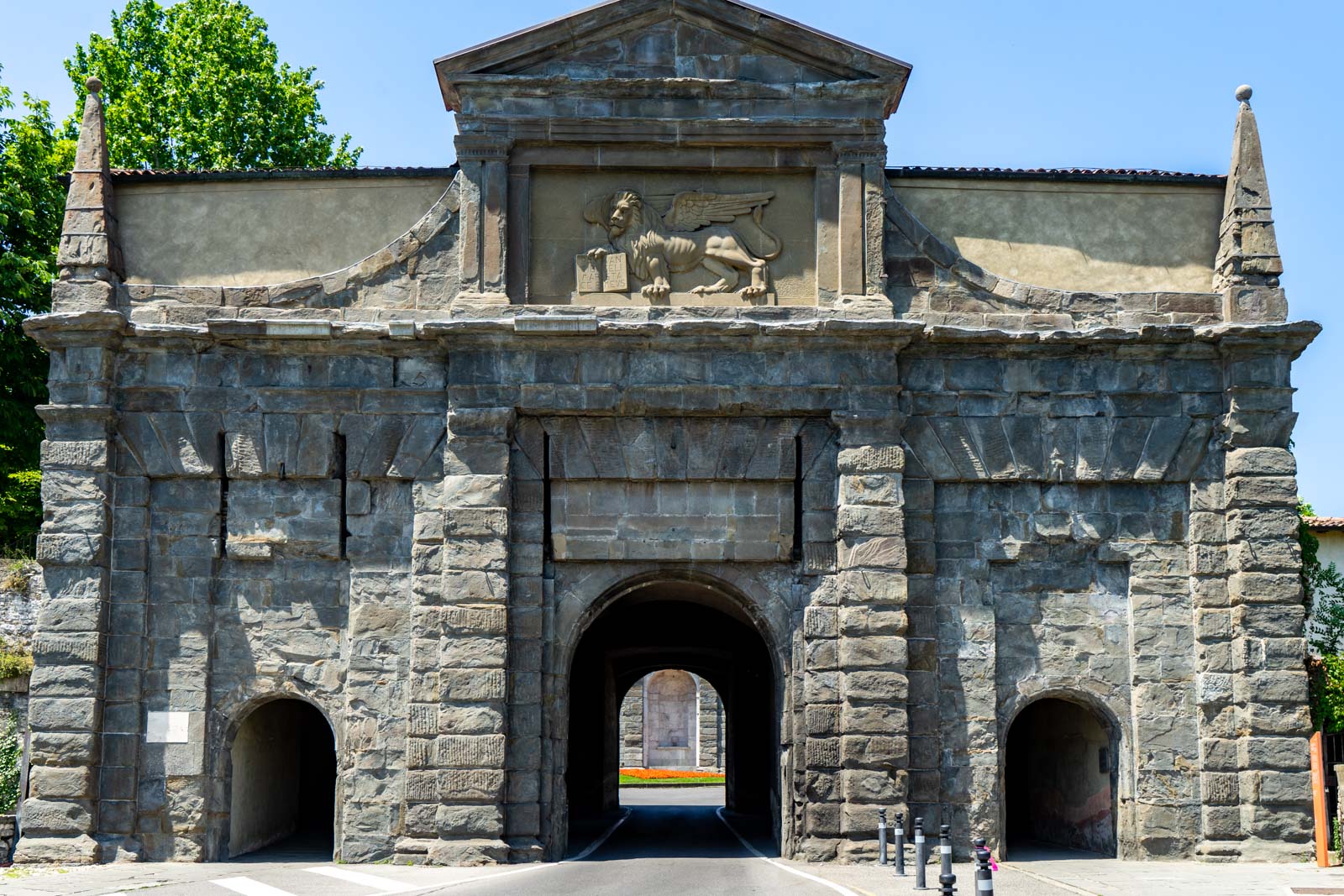 If you follow this itinerary, it should take you at least half a day to see everything – possibly even the whole day if you visit all the museums and have a good break for lunch.

While many people come through Bergamo because they’re using the airport, it is also a fantastic day trip from Milan.

If you’re looking for a tour or other things to do around Bergamo, then these options may be of use:

The Venetian Walls of Bergamo have actually had the desired outcome. They have protected the city and kept the history preserved here.

As I hope you now see, there are lots of things to do in Bergamo and it really is one of the most beautiful and charming cities in northern Italy.