On the Rhine River, about 100 kilometres south of Frankfurt and before it hits the French border, is the largest Romanesque church in the world. 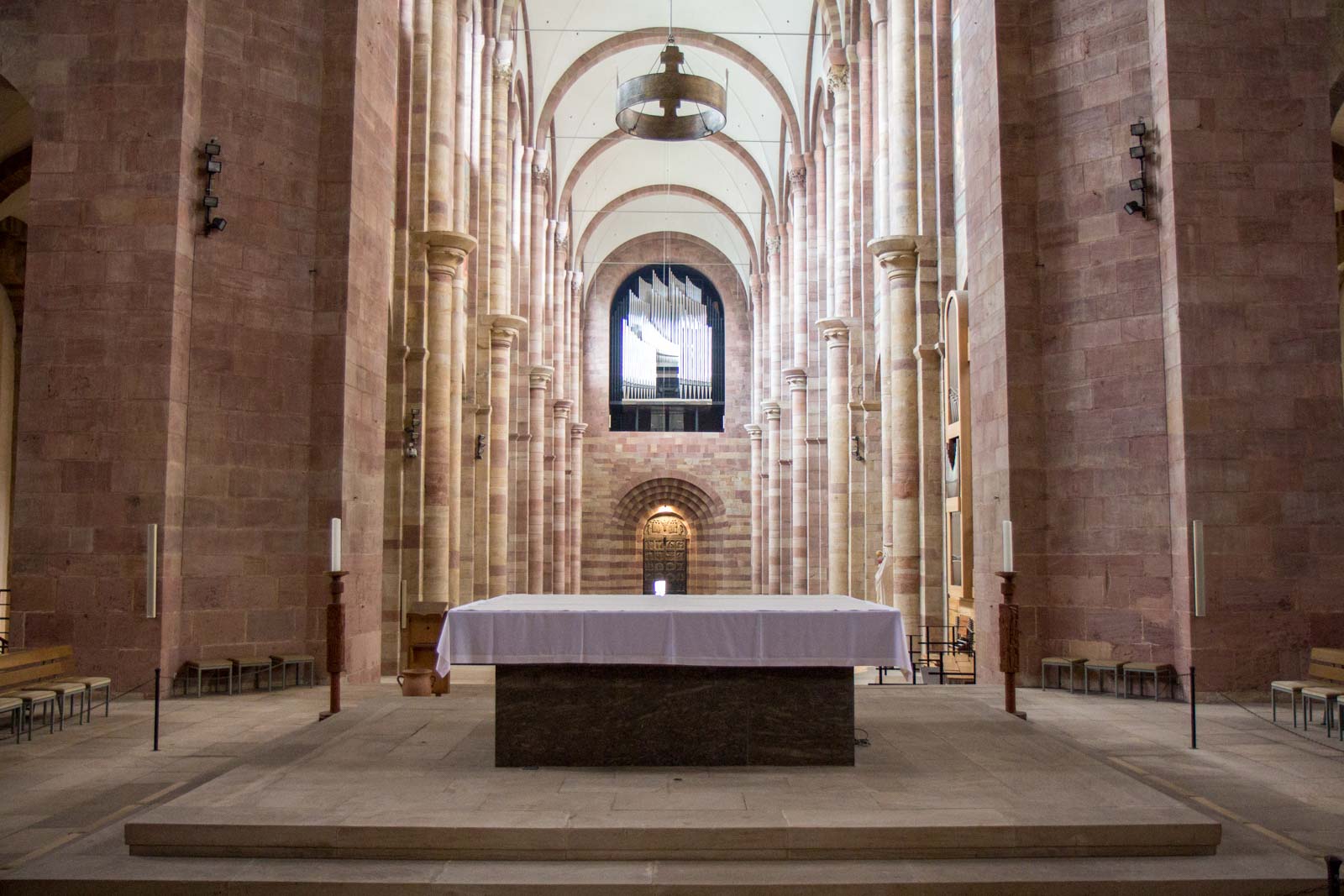 It’s called Speyer Cathedral and although it’s in a town of only about 50,000 people, it has been one of the most important churches in Europe for almost a thousand years.

Speyer Cathedral is an impressive building – not just for the sheer size of it but because of the influence it has had on architecture in Europe. 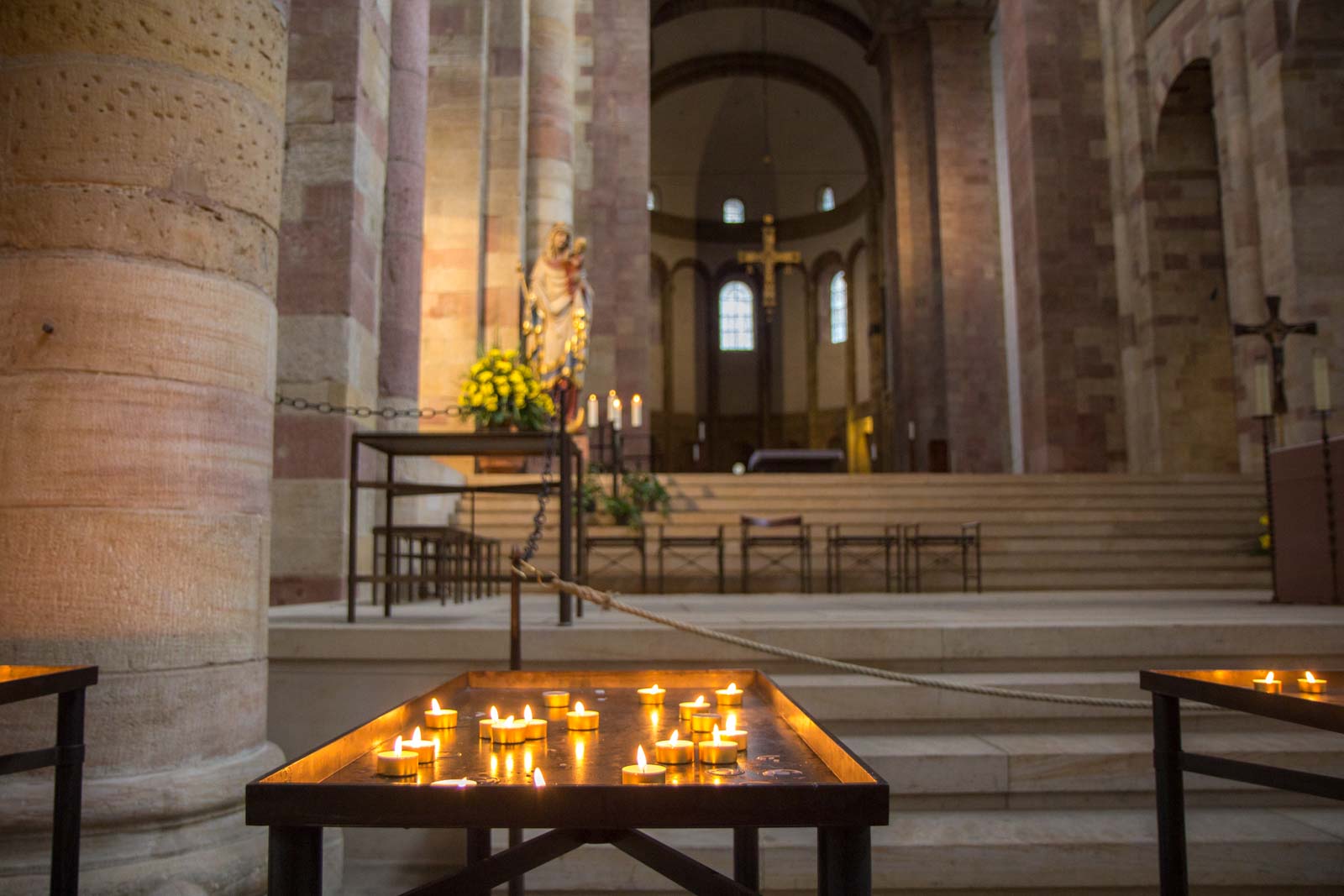 Architecturally, Speyer Cathedral broke new ground as the first structure to have a gallery encircling the whole building and an innovative system of arcades.

Today, it doesn’t look unusual – but the construction work done here helped develop techniques that enabled many of the other grand churches in the region to flourish. The first construction of Speyer Cathedral was in 1030 and a subsequent renovation in 1077 made it the first and largest consistently vaulted church in Europe.

Over the centuries there have been other changes to the main design of the building – adding on and improving the original design. Walking in, the first thing that strikes you is how deep it goes and how the beautiful symmetry creates such a sense of space. The interior is decorated quite simply without some of the grand art in other German churches.

However, look closely – and you’ll see how the bricks of slightly different colours that the columns are built with create a mottling effect that brings the stone to life. For 300 years, Speyer Cathedral was the burial site of the German leaders and some of the most important kings and emperors still have their tombs in the fully preserved crypt.

Historically, the cathedral is a symbol of imperial power and the close links between the monarchy and the Catholic Church. It was used as a tool to take and maintain power – by both the church and the state.

The layout and some of the design is still based on this struggle for authority. The main part of the building is free for visitors but it’s worth paying the admission fee to see the Imperial Hall above the main entrance with its large artwork and climb one of the towers to the viewing platform with its vistas across the city.

Be warned – there are a lot of stairs, but the perspective of the cathedral from the tower gives an excellent insight into the architectural design and external features. 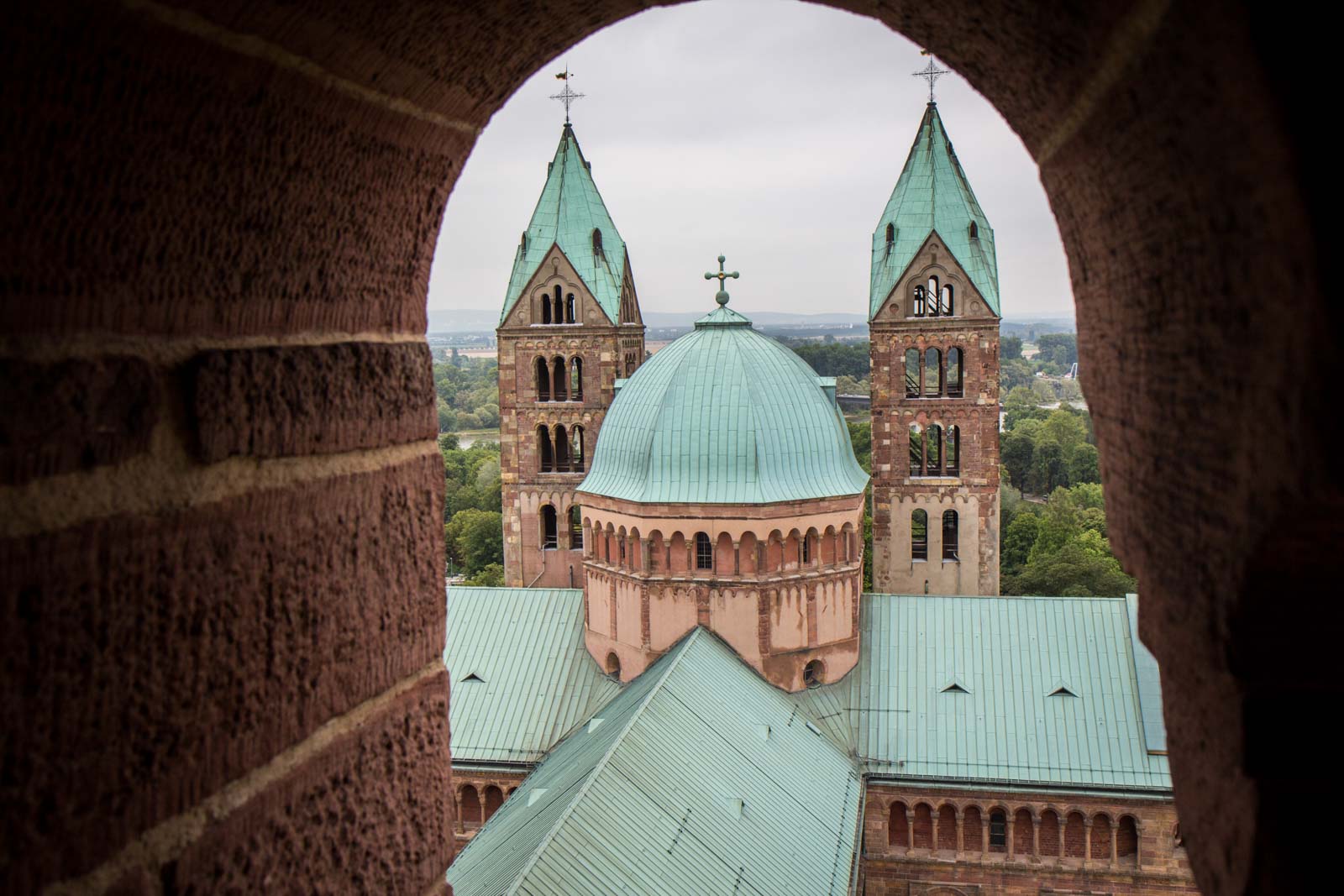 Inside the main part of the church, make sure you go down into the crypt to see the tombs of the kings.

Also, there is often an art display at the back behind the altar with a mix of classical and contemporary pieces. Although larger churches have been built in Germany since Speyer Cathedral was first constructed, it is still a grand and impressive building.

Once you consider all the history beneath its nave, it gives the site even more significance.

Speyer Cathedral is located at Domplatz, 67346, Speyer, Germany.
You can see it on Google Maps here.
To get to Speyer Cathedral, catch the train to Speyer and then you can walk there in about 15 minutes.
The cathedral is open at the following times:
November - March: 0900 - 1700
April - October: 0900 - 1900
Entry to the cathedral is free but ticket prices to see the Emperor's Hall and climb to the top are:
Adults: €6
Reduced: €3
Speyer hosts a lot of great festivals during the year so check to see if there are any events happening when you visit.
Item copy