Could you say that this church was built with a skeleton crew? Probably… but that would be tasteless, so I wouldn’t do that.

Regardless, there were some people who certainly put their back into it. 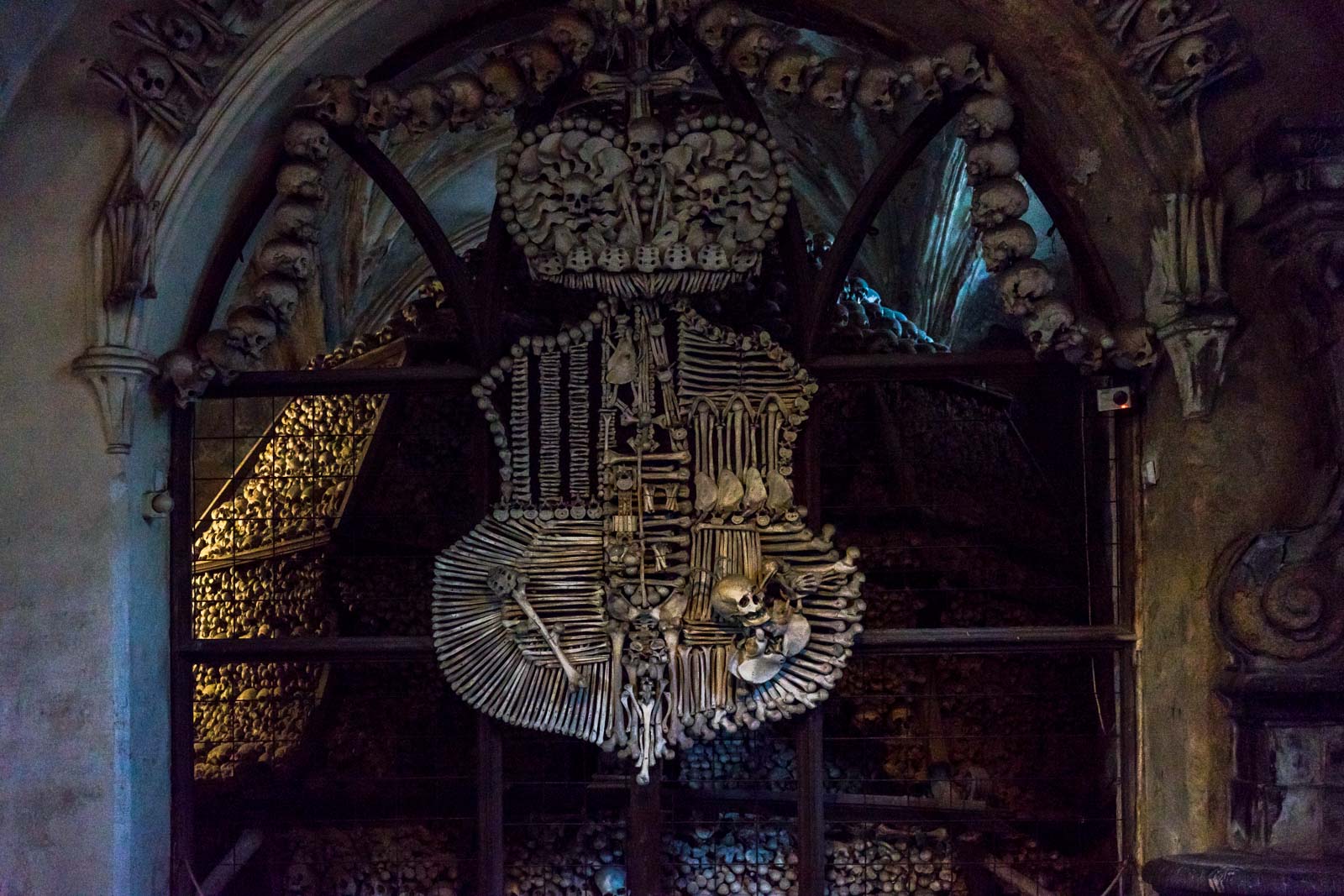 I’m at the Sedlec Ossuary, one of the strangest places in the Czech Republic. It’s gruesome, yet beautiful; morbid, but somehow romantic.

It’s a testament to the creativity of humans… and creativity with humans. 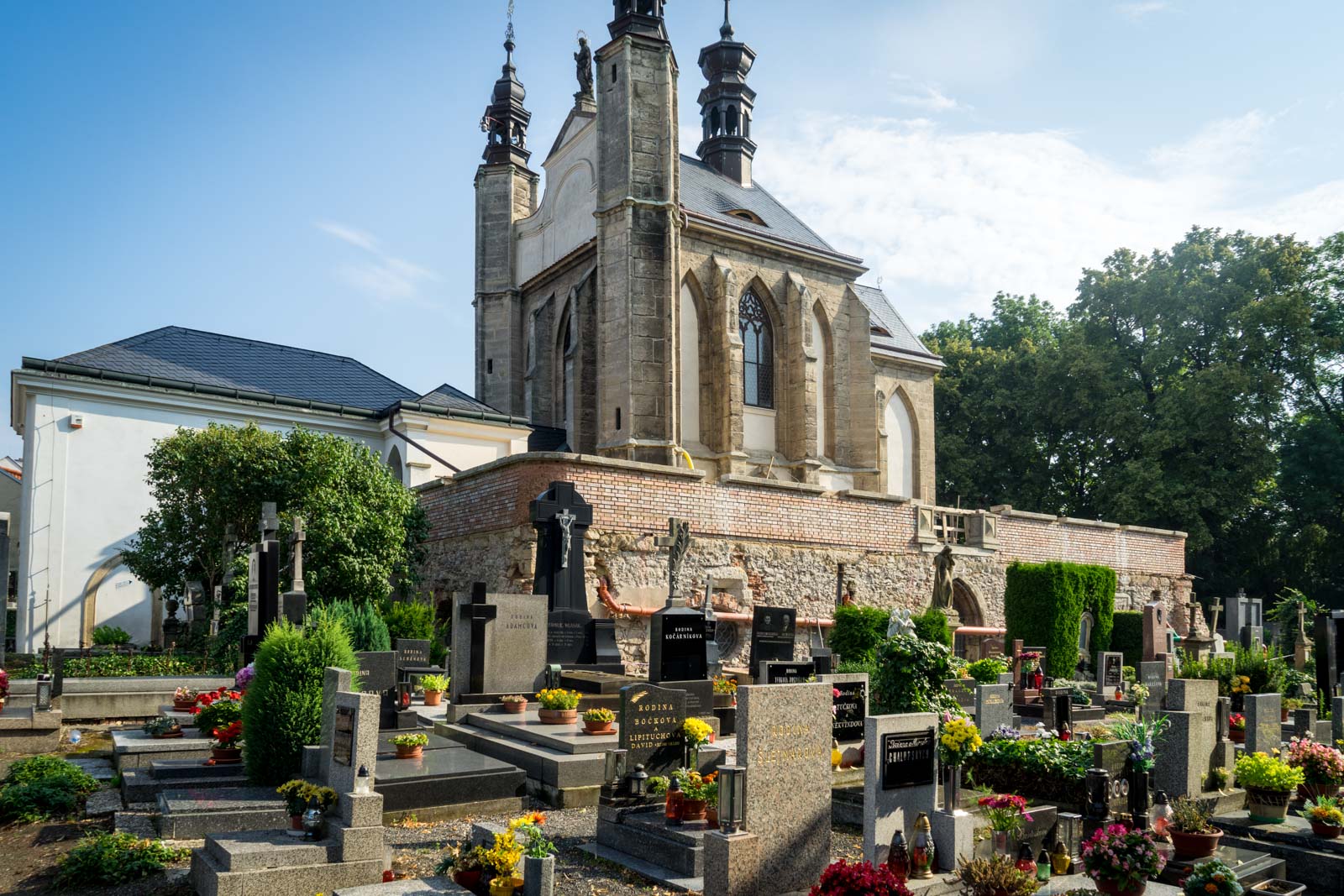 The Sedlec Ossuary is in the city of Kutná Hora. You may recall that I’ve already written about the city and the two main churches that make up the main part of a World Heritage Site.

They are large monumental buildings that exhibit the lavishness of religion as you would expect.

>> Read my story about Kutná Hora

The Sedlec Ossuary is just a few minutes walk from the Cathedral of Our Lady at Sedlec, the bright and warm church filled with art. But you’ll find something completely contrasting here.

As you go through the front door, you may feel your spine tingle slightly. 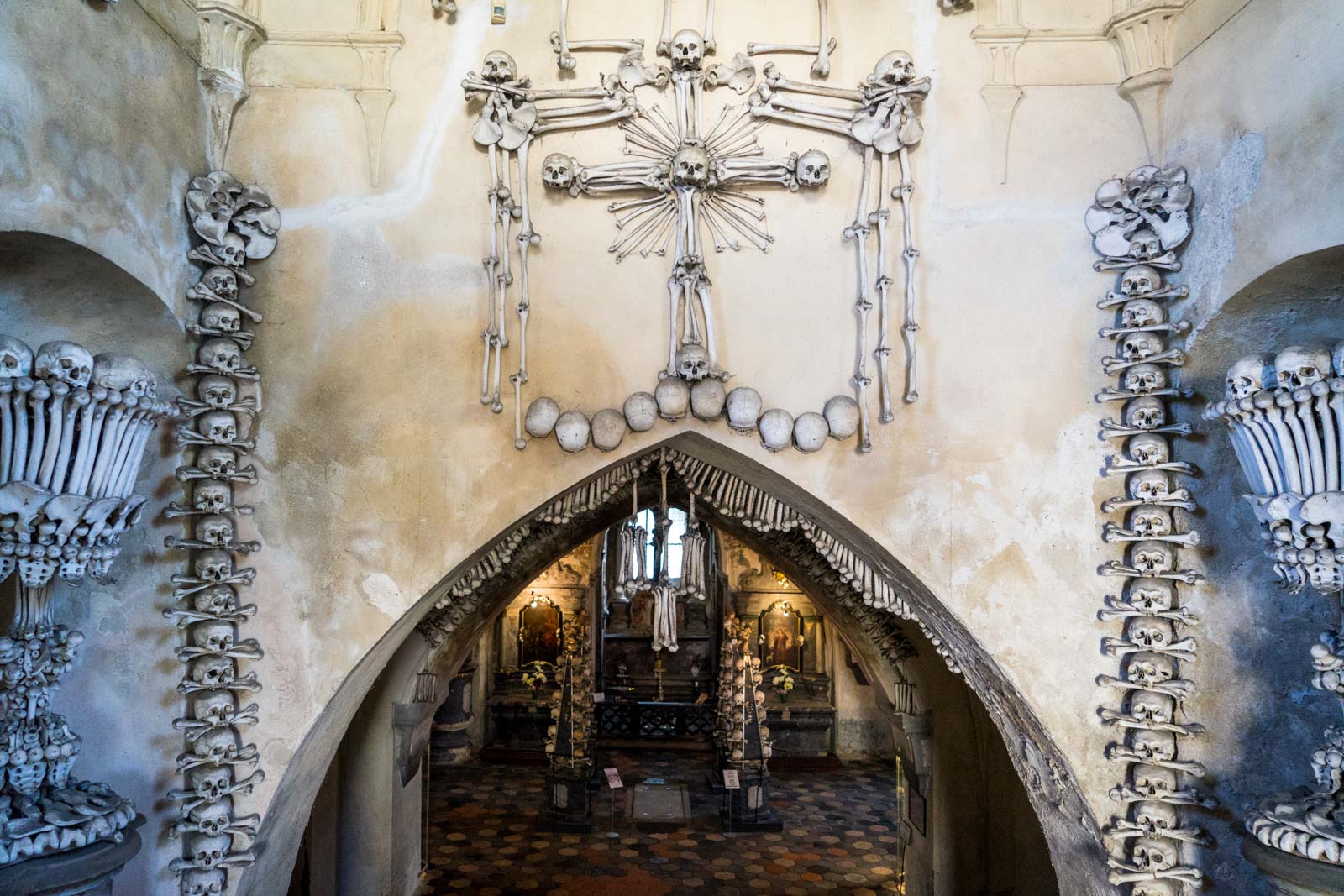 Inside, bones hang on the walls. Bones hang from the ceiling.

An enormous chandelier is made from bones, pieces of art have been created out of bones, display cases hold rows of… you guessed it… bones. 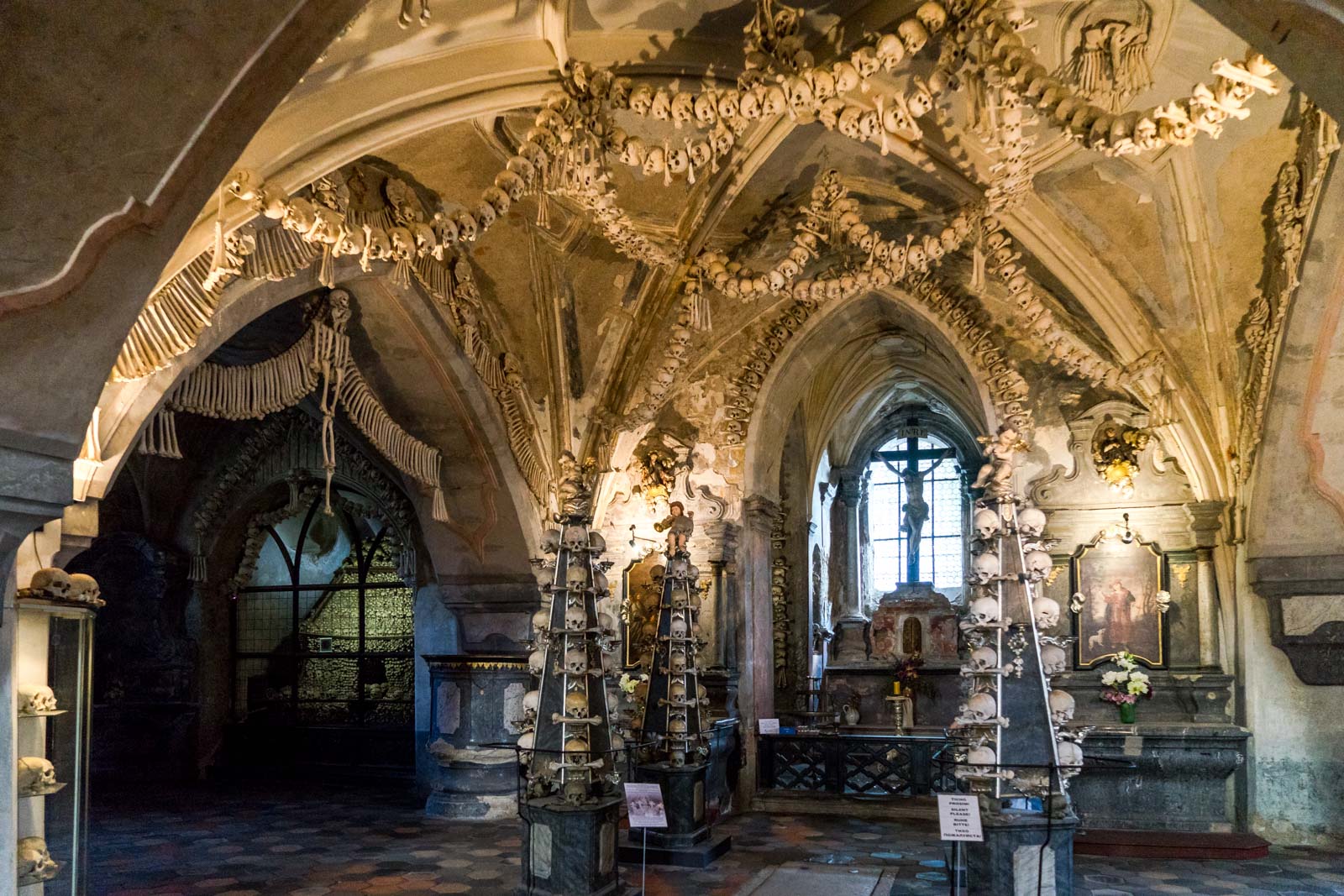 The chapel is quite small. You don’t need to move much to see it all, except to take a closer look at some of the details.

When you’re standing in the middle, turn in any direction and some grisly arrangement of femurs and tibias will be right in front you.

Inside the ossuary are the bones of more than 40,000 people! 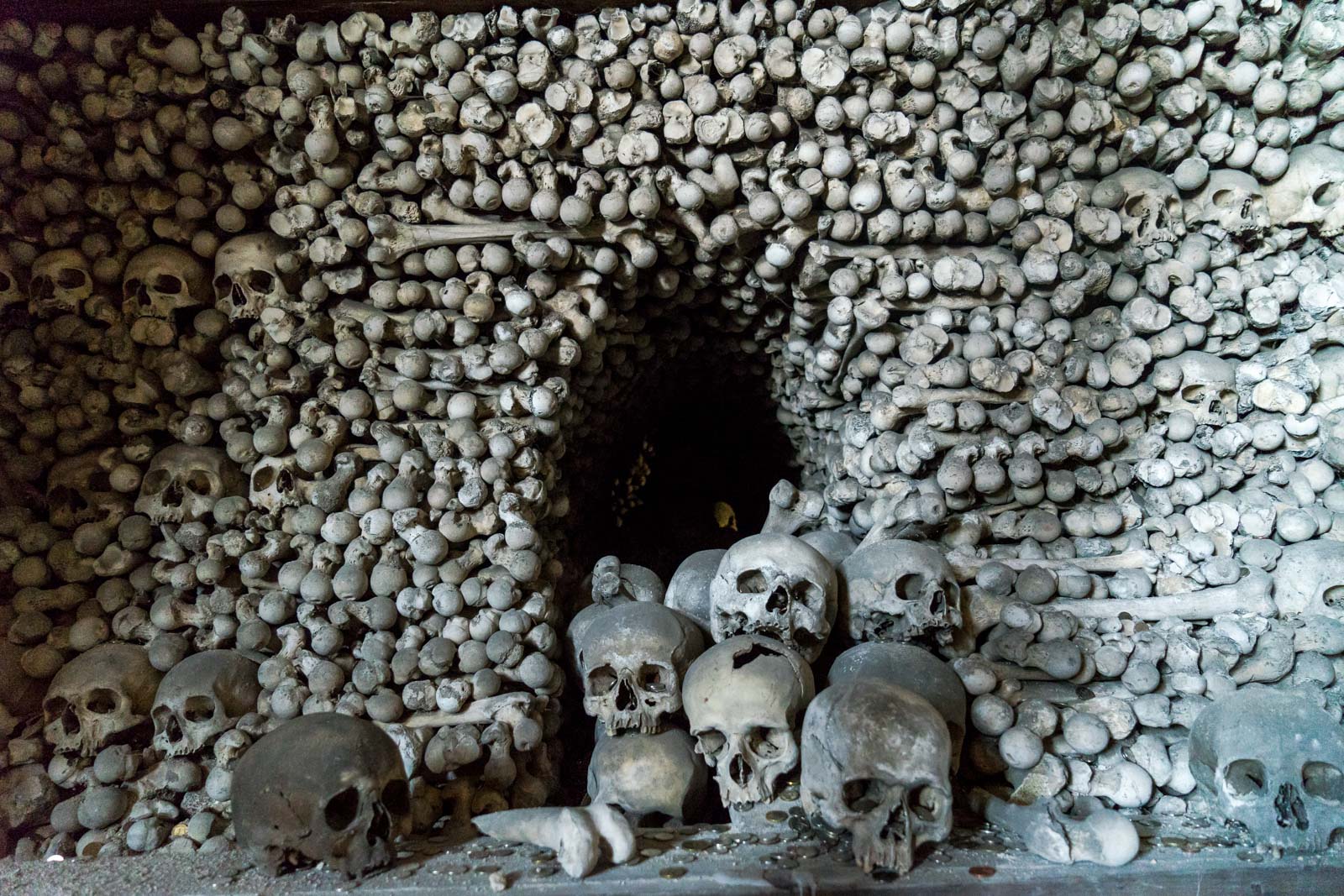 The story of the Sedlec Ossuary really starts in 1278 when an abbott came back from Jerusalem with a jar of ‘holy soil’. He scattered it on this spot and soon it became a popular spot to bury bodies.

Over the next century, two big things happened – the Hussite Wars and the Black Death. Thousands upon thousands of people died and the burial ground here became full. 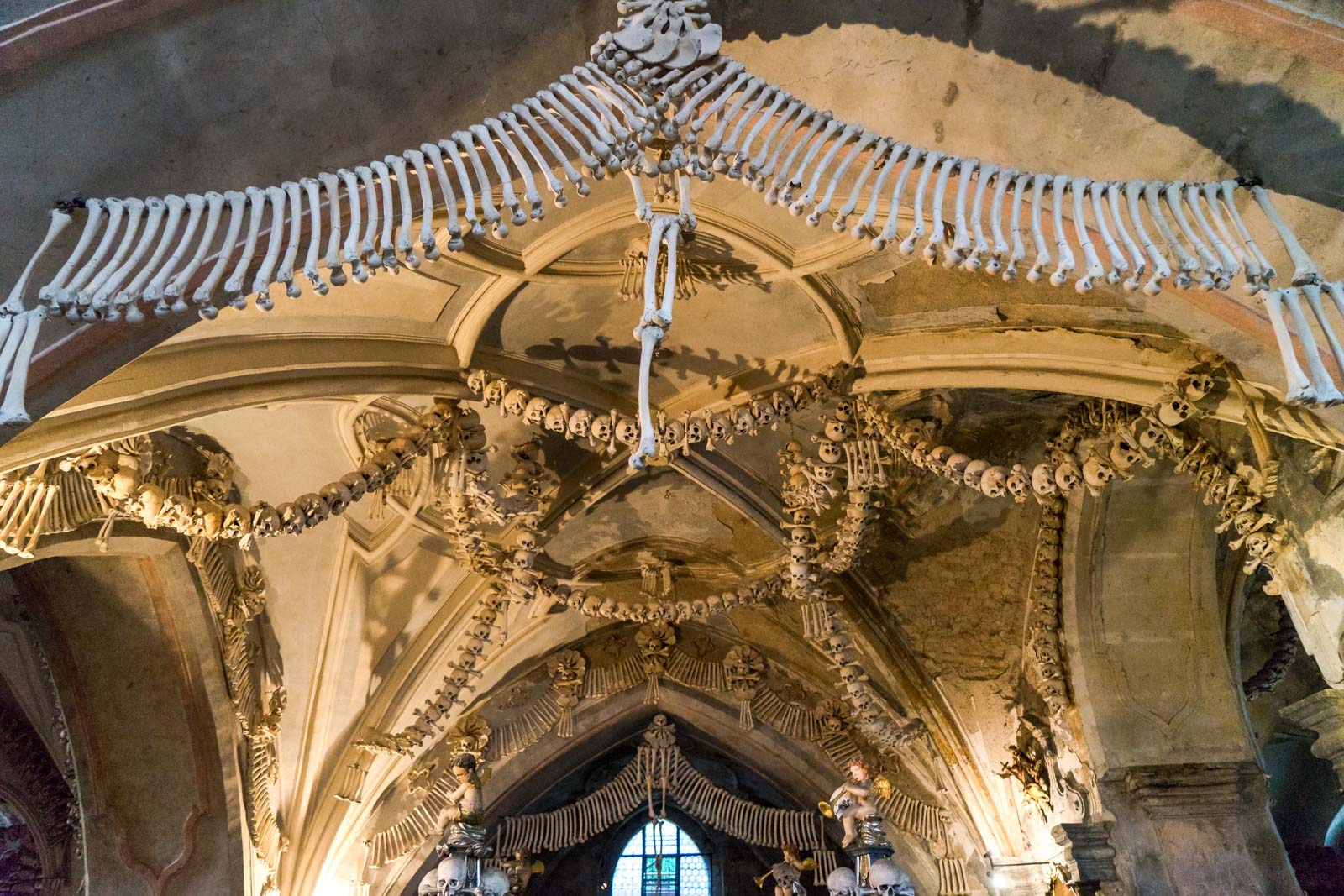 When a new church was built on the site around 1400, some of the bodies were dug up and their bones were put into the ossuary beneath the church for storage.

About a hundred years later, it was decided that the rest of the bodies in the cemetery would be dug up and their bones also stored here. 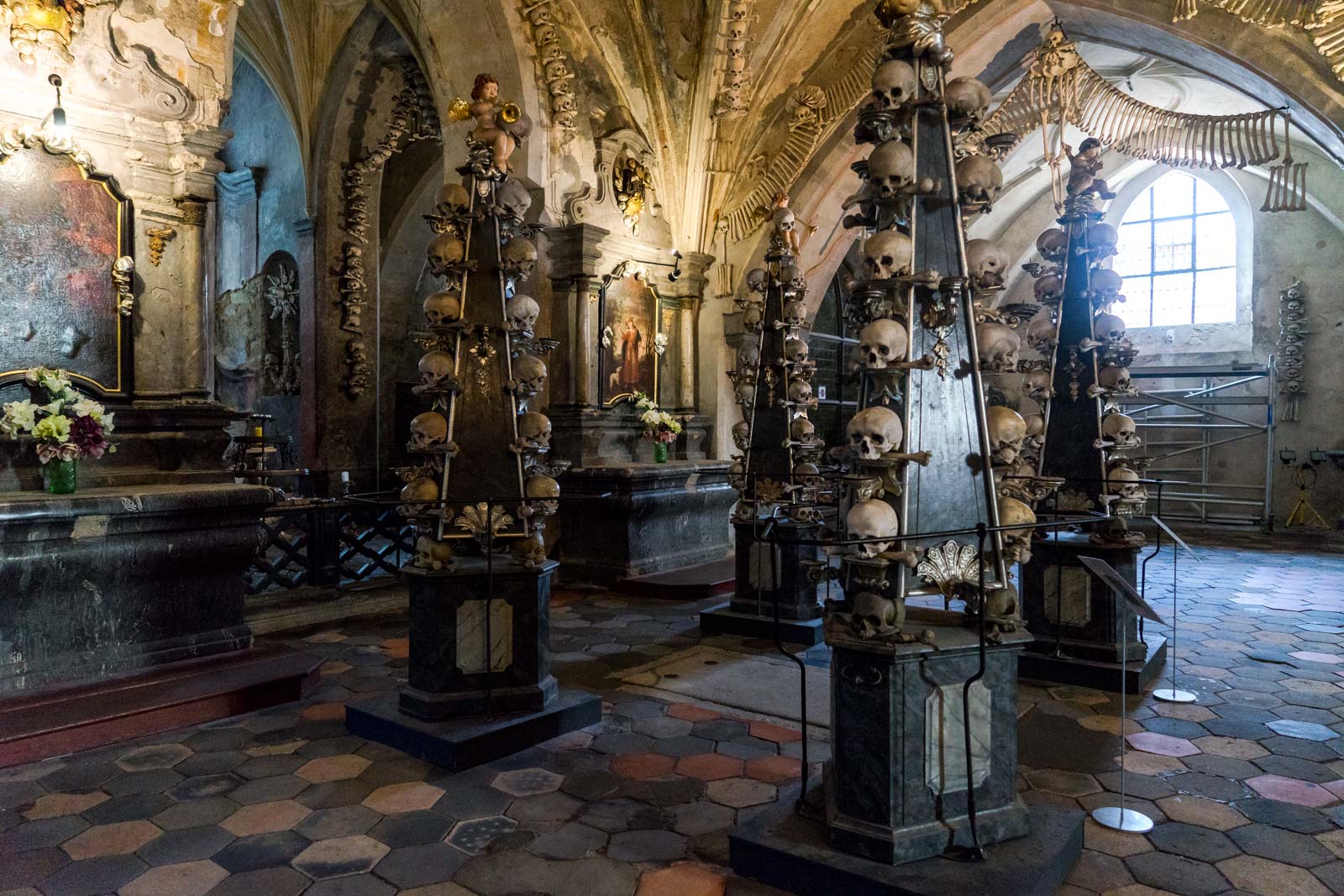 It wasn’t until 1870 that someone decided the bones should be arranged, rather than just stored.

I haven’t been able to find any conclusive reason for why anyone thought this would be a good idea, but the job was given to a woodcarver called František Rint. It is his work that we’re able to see, almost 150 years later. 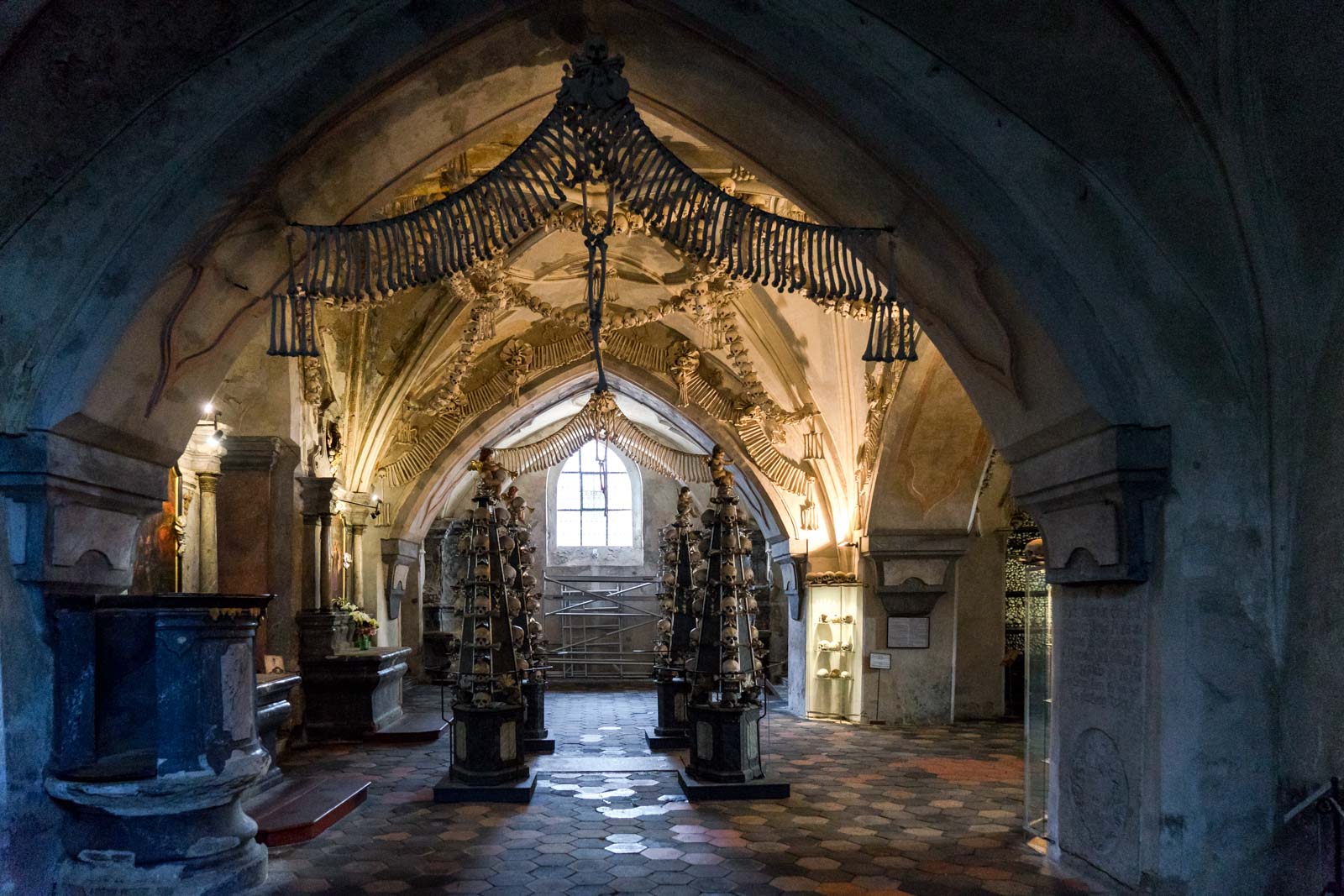 This is actually not the first time I have seen something like this. In Serbia, I visited a place called Skull Tower in the city of Niš, where skulls had been placed into the walls of the tower.

The tower in Serbia was built in 1809 as a threat, to display the remains of enemies who had dared cross the Ottoman Empire. Here in Kutná Hora, the bones are displayed to honour the dead (however creepy it may seem). 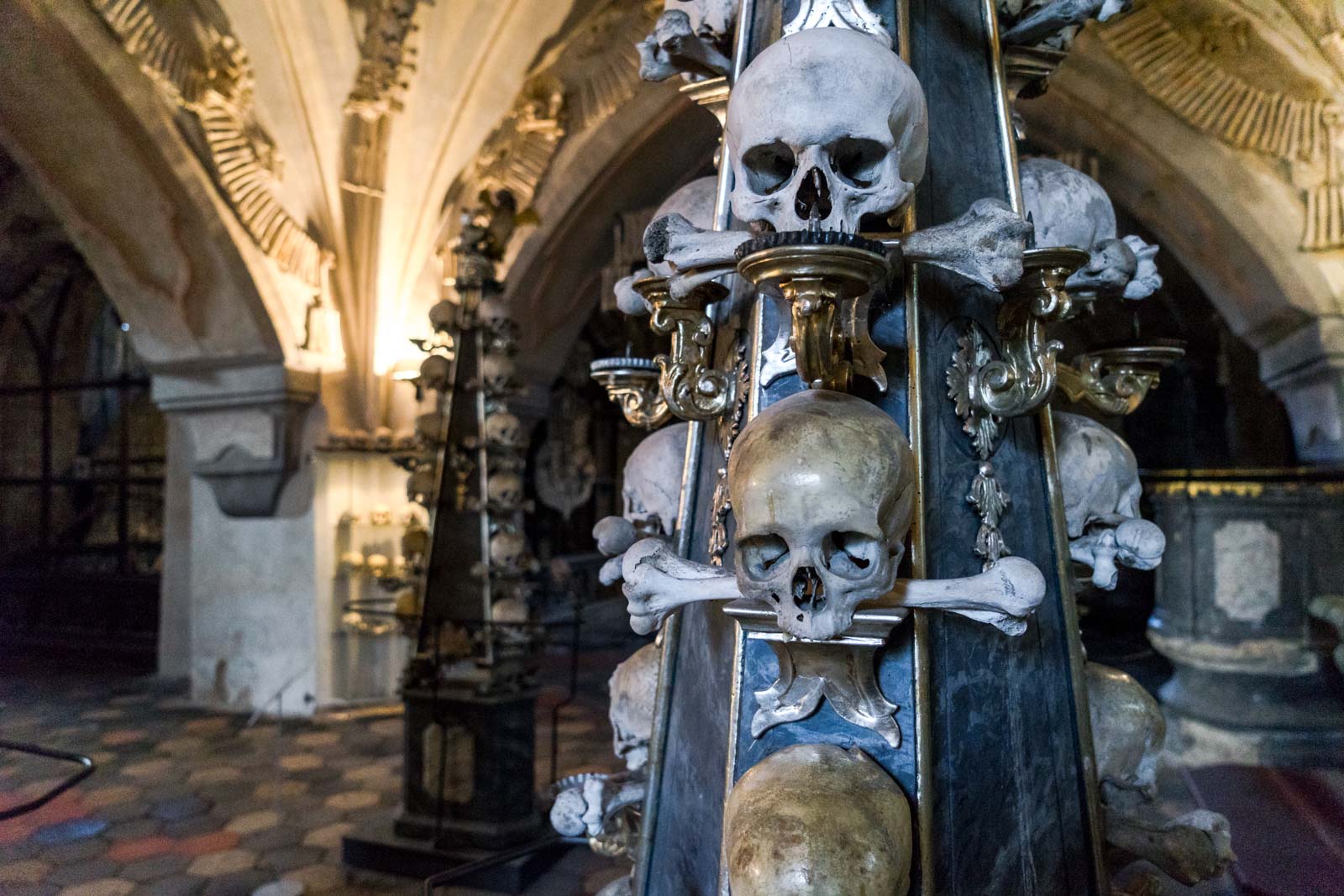 I do wonder if it’s actually an honour.

Skulls are stacked onto conical shelves, staring out with hollow eyes in panorama. Legs and arms are used to make a coat of arms… heralding what?

The people to whom these bones belong were never given the choice of whether they wanted to be used for art, displayed in such a way that tourists would come and take photos (and write about it on their blog). 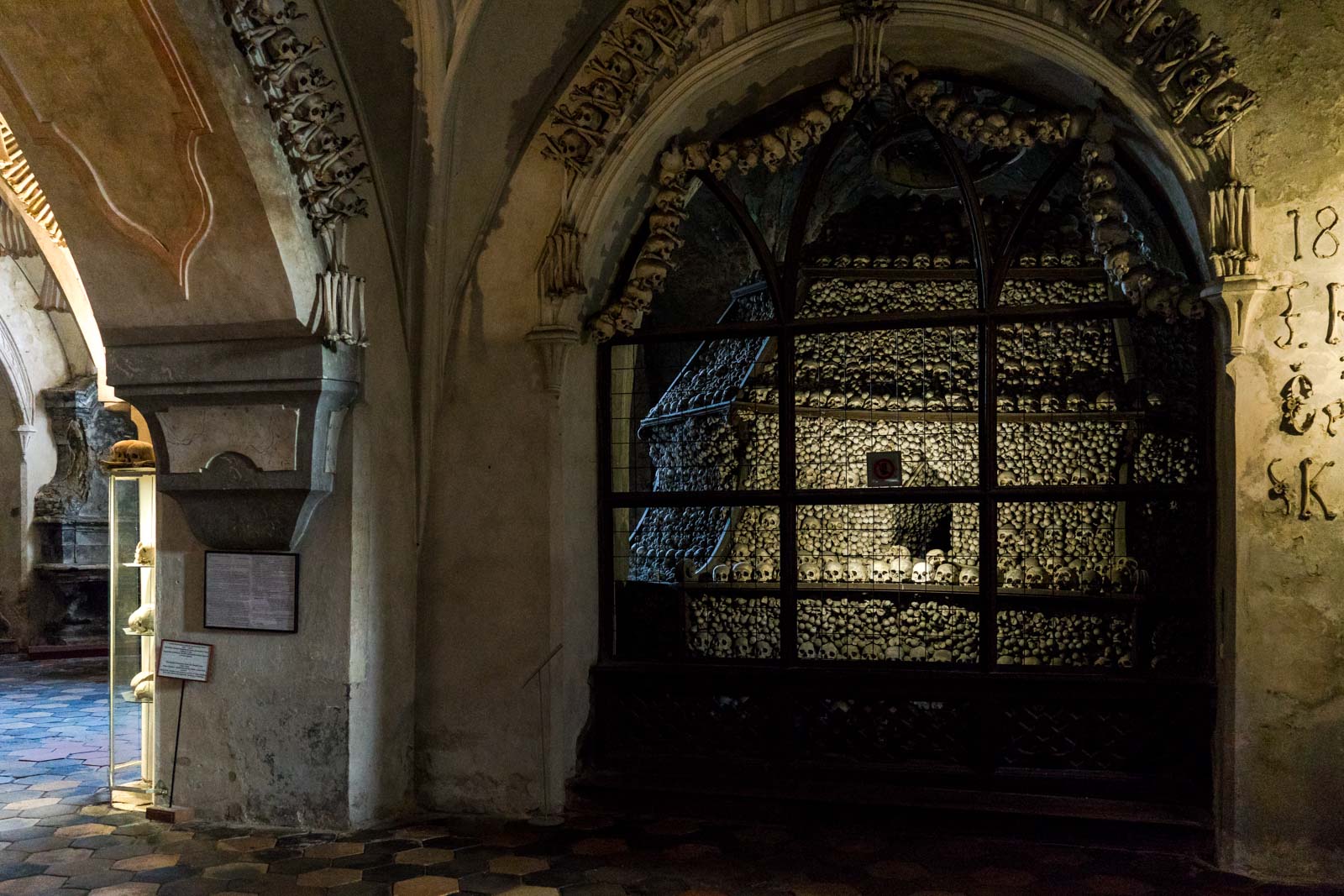 But, then again, many of them did choose this location because it was deemed to be holy, blessed, special. Is that not what this place still is, in some modern way?

Certainly the remains of these medieval citizens have not just been lost and forgotten under the ground. 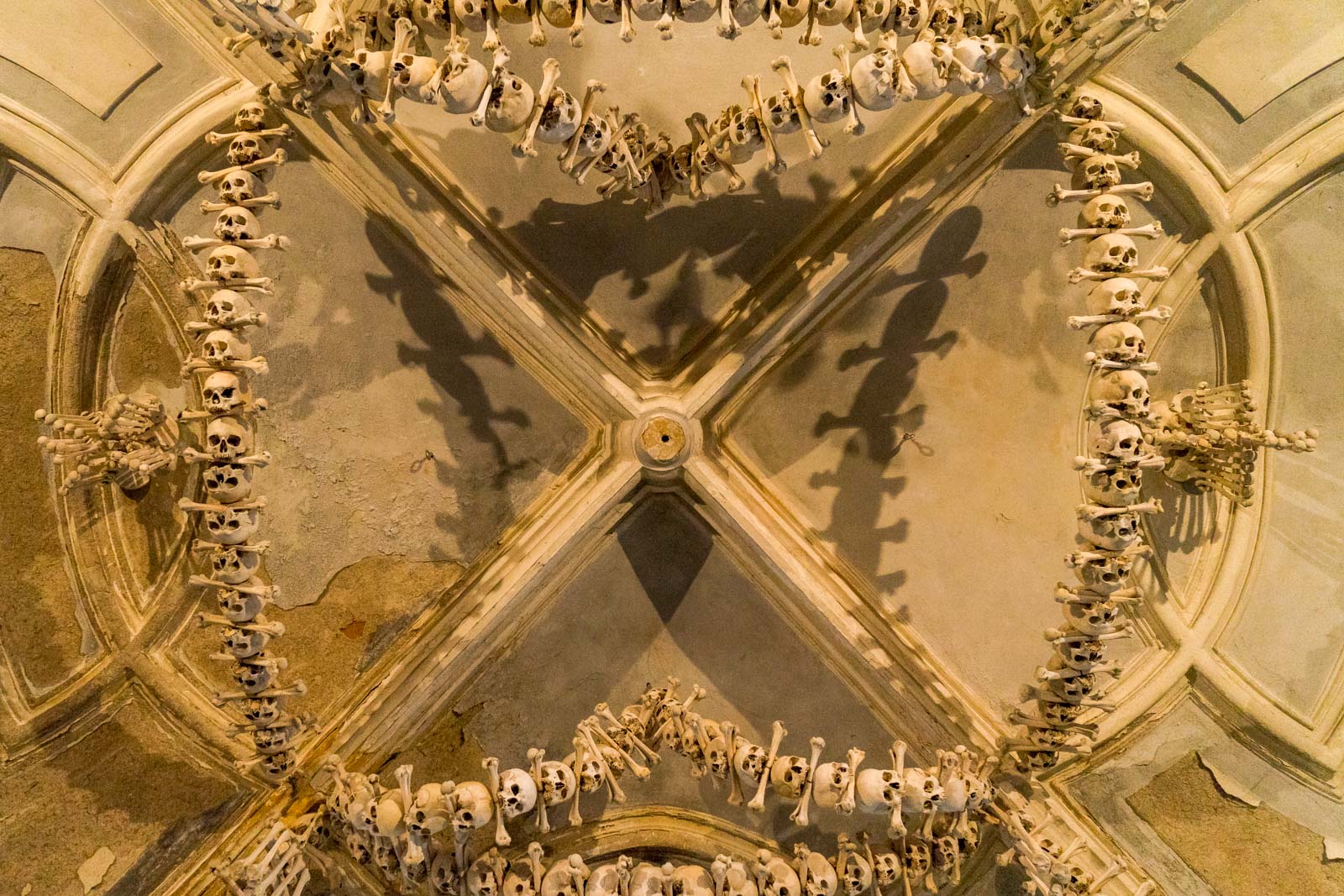 How do you get to the Sedlec Ossuary?

The official address of the Sedlec Ossuary is Zámecká, 284 03 Kutná Hora. You can see it on a map here.

With public transport, the best way to get to Kutná Hora from Prague is by train. There’s a direct train to the main station that takes about 50 minutes and the ossuary is near there. To get to the historic centre, it’s either a 30 minute walk from the station or you’ll need to change to a local train to the Kutná Hora město station. You can check the timetable here.

When is the Sedlec Ossuary open?

How much does it cost to visit the Sedlec Ossuary?

I would suggest buying the combined ticket for the Church of St Barbara, the Cathedral of Our Lady at Sedlec and the Ossuary at Sedlec. That costs 185 CZK (US$7.60) for adults and 130 CZK (US$5.30) for concessions. Children need to buy separate tickets.

Are there tours to Kutná Hora?

Yes, there are lots of tours to Kutná Hora that include the Sedlec Ossuary and they are a great way to make the most of a day trip from Prague. While it’s easy enough to get there and see everything independently, it does take longer to do it yourself and involves a bit more work. I would recommend either this day trip from Prague or this one.

Where should you stay in Kutná Hora?

If you’re looking for a budget option, I would suggest Penzion Sedlec which is close to the main train station.
For something affordable but comfortable, Pension Bed&Breakfast is probably the best place.
For a nice modern apartment, you should definitely try Penzion Apartments Benešova 6.
And if you want to splurge for somewhere special, you can stay in a castle filled with modern art at Chateau Třebešice!