In the mountains of Kyrgyzstan, gems are not hard to find. But they can be hard to get to.

One of the most beautiful places in Kyrgyzstan is up in the Tien-Shan mountains in the northwest of the country. It’s called Sary-Chelek Lake and it truly is a gem.

It can be hard to get there if you take the long way along small paths across mountains. But it’s a popular spot with locals because there is now also a road that approaches from a different direction, making it easier to reach than many other beautiful spots in this region.

In my case, I took the hard way.

You may recall that I have written previously about a three day horse trek I took through the mountains of Kyrgyzstan.

>> Read my story about the horse trek

It was Sary-Chelek Lake that was the main destination for this three day ride… although it was really the landscapes along the way that justified the journey.

I’ve come to realise that in Kyrgyzstan, probably more than anywhere I’ve been, you don’t need to be going anywhere in particular to experience such a range of stunning views.

But Sary-Chelek Lake is still something special and, even amongst all this natural beauty, it stands out. 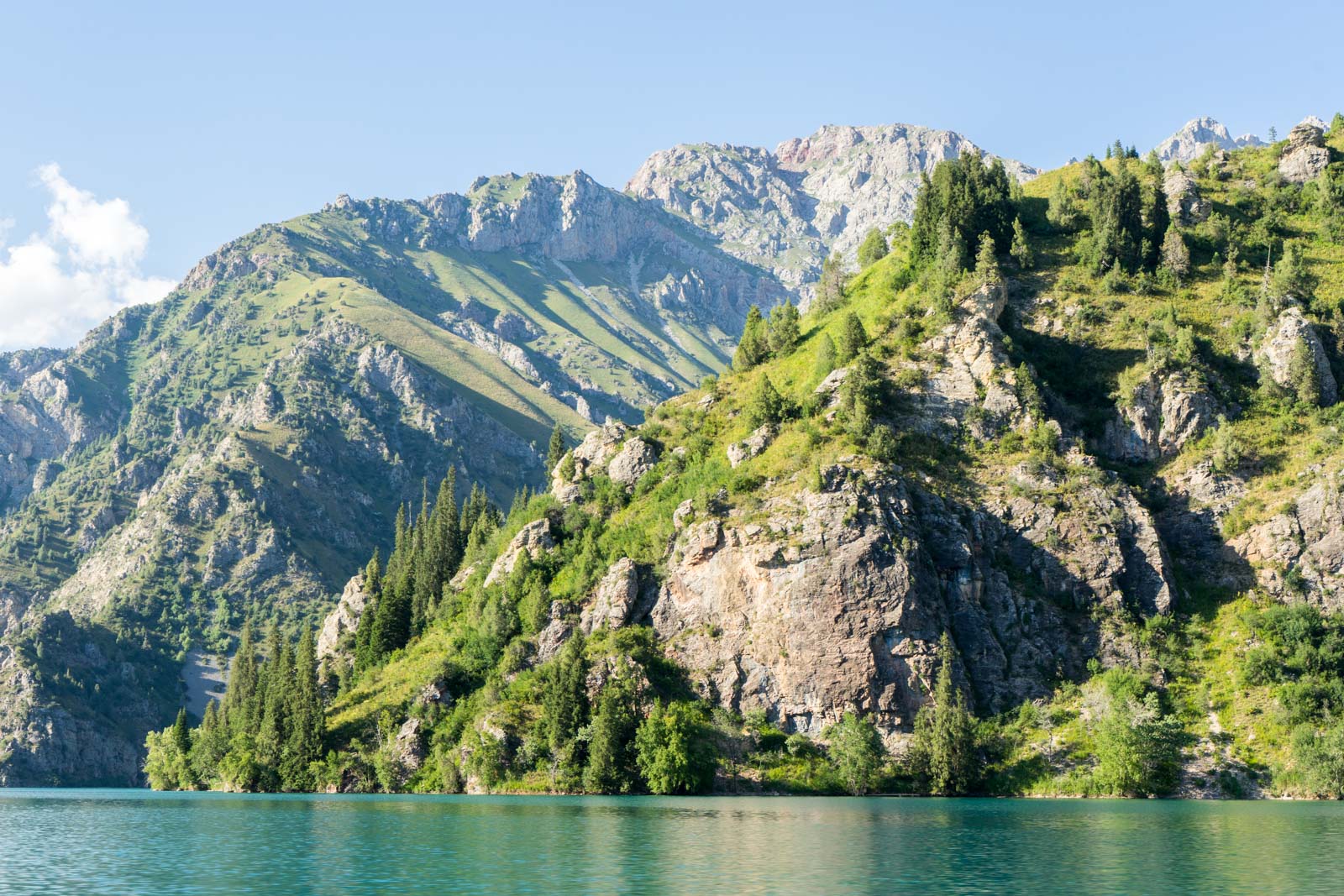 The lake is actually part of a larger area called Sary-Chelek Nature Reserve, which has been designated as a UNESCO biosphere.

There are about five smaller lakes within the reserve but the main one is significantly larger and it’s where we lead our horses to, down from the slopes above, through forests, across meadows, and over rocks.

The altitude of the lake is only about 2000 metres high (you know you’ve spent a bit of time in Kyrgyzstan when you use the word ‘only’ before ‘2000 metres high’).

Mountains on the horizon that protect the basin have snow on the top of them but at this level there are wild apples, pears, and walnuts growing.

I arrive on horseback at the edge of the lake and am surprised to see a bit of a car park. It’s been a couple of days since I’ve seen anything motorised. The shore of the lake is down a bit of a slope but, at the top of the incline, there are quite a few groups of local people – friends or families. There are some buildings here with spaces to prepare meals, and some tables in the open air to eat them.

Many of the groups have three or even four generations, with mothers and grandmothers preparing enormous dishes of meat or vegetables, and loaves of bread piled up next to them. 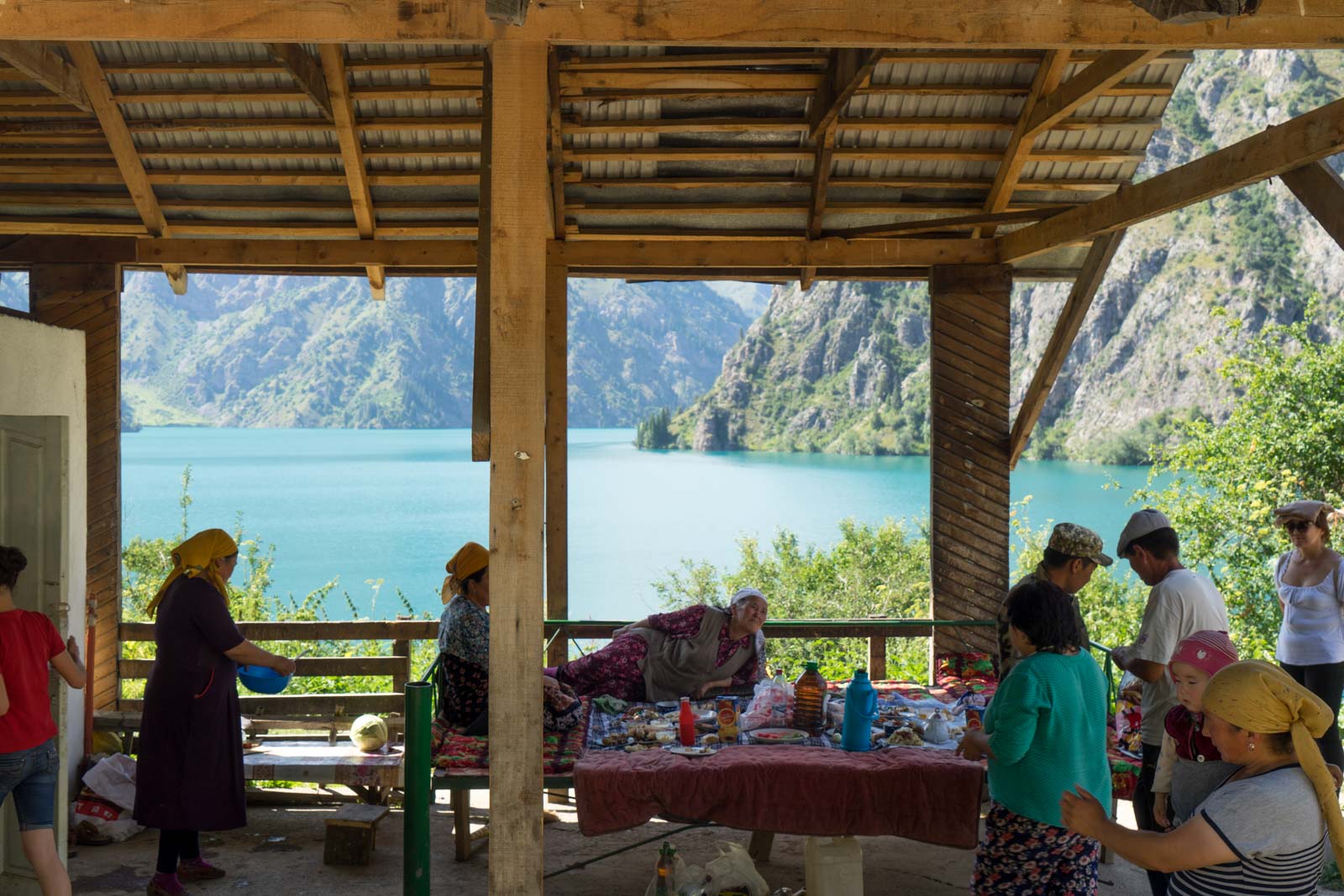 But this recreational area, complete with a few little vans selling drinks and photographs, is just a tiny part of the lake front. Sary-Chelek Lake is 470 hectares large and it’s impossible to see from one end to the other because of the way it curves around. 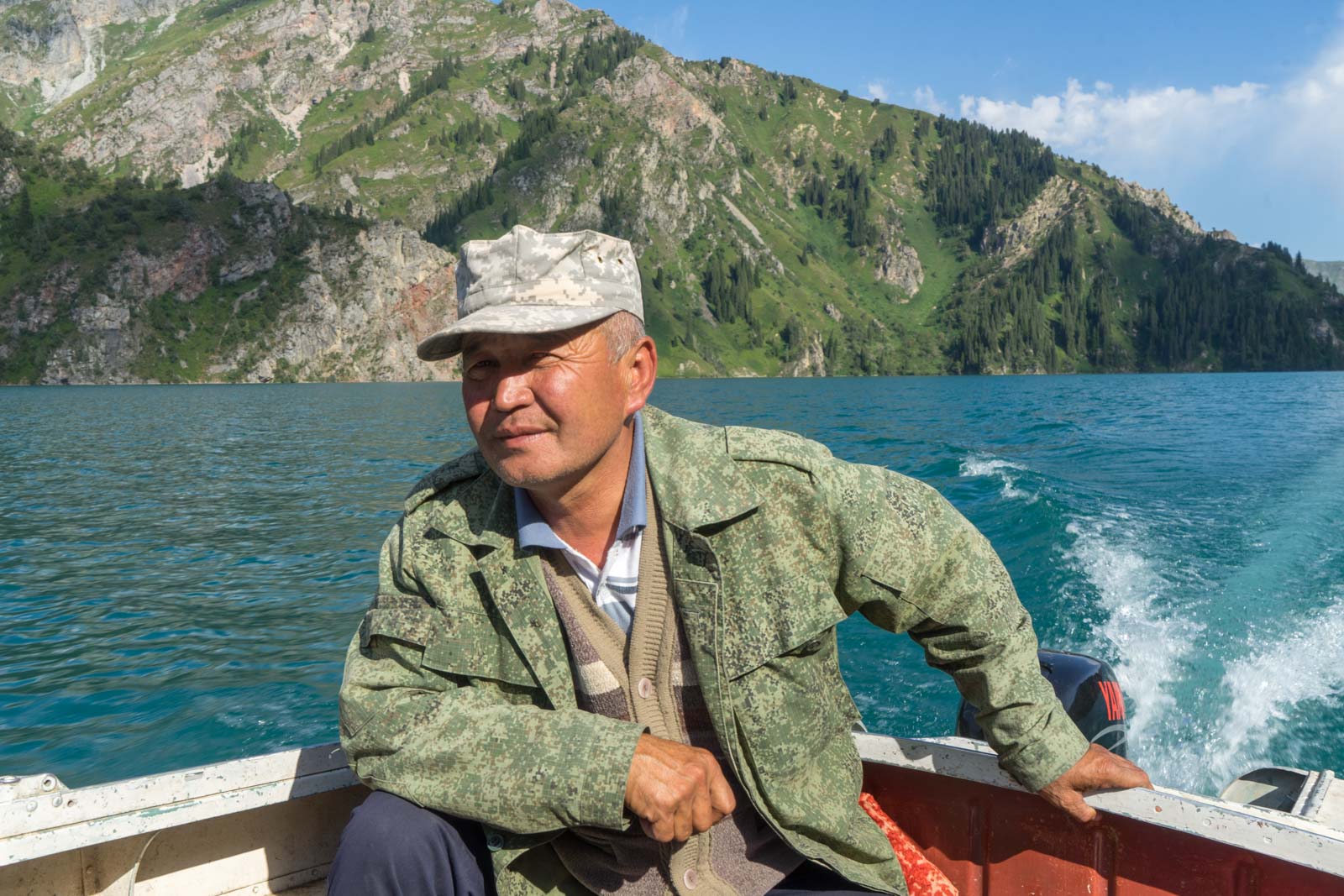 To get a proper sense of the size and to appreciate how it looks, I take a ride on a small boat from one side to the other. You can have a look for yourself with this 360 video. Make sure to spin the video around and look at it from different angles.

If you would prefer not to look at the video, here are some photos from different points along the boat ride, which takes about half an hour in each direction. 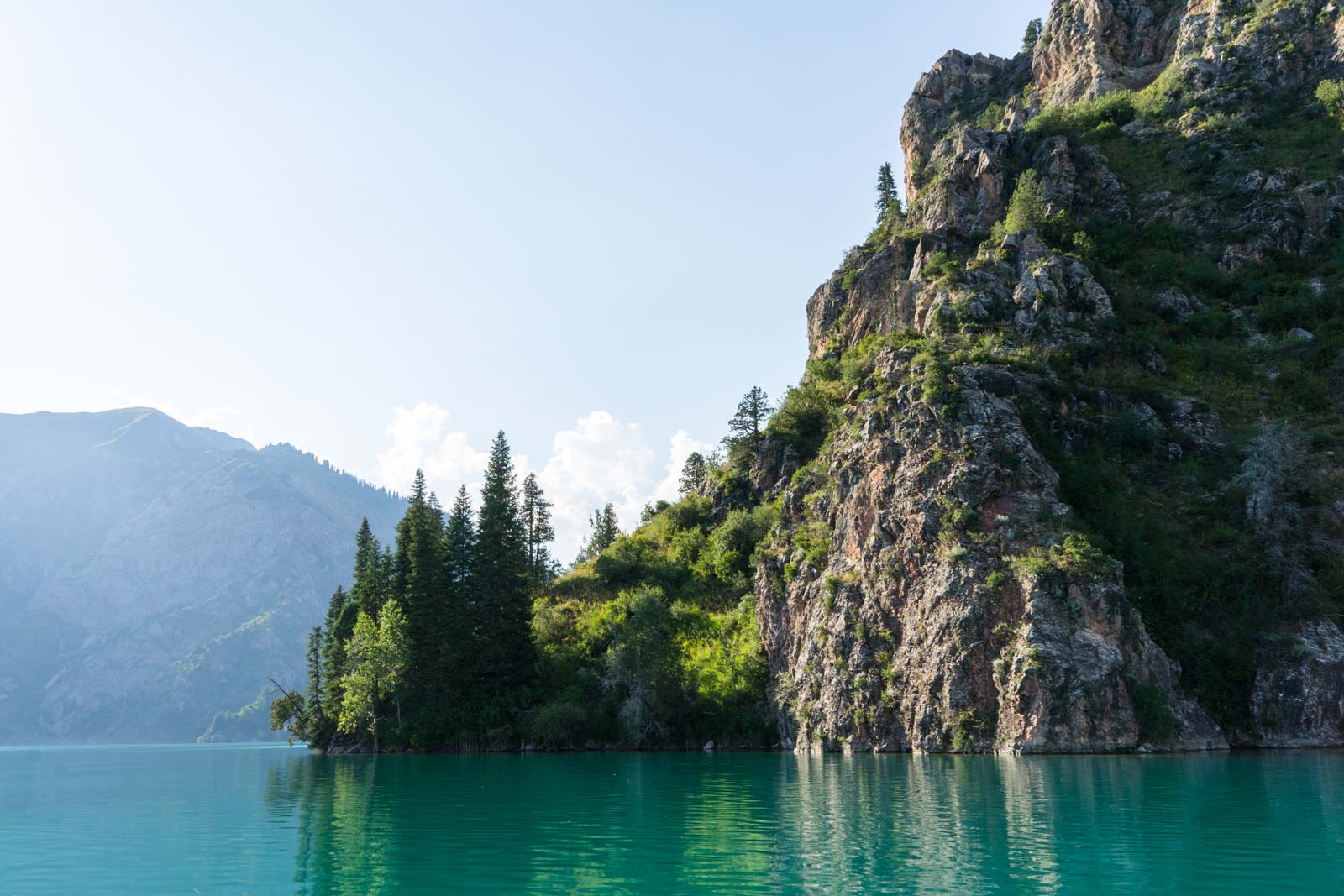 Sary-Chelek Lake and Sary-Chelek Nature Reserve are not just a UNESCO biosphere. They are also part of a UNESCO World Heritage Site.

The site is called the Western Tien-Shan and is made up of 13 protected natural locations across the Tien-Shan mountain range in Kazakhstan, Kyrgyzstan and Uzbekistan.

The mountain range is one of the highest and most important in the world and it has an extremely diverse collection of animals and plants. 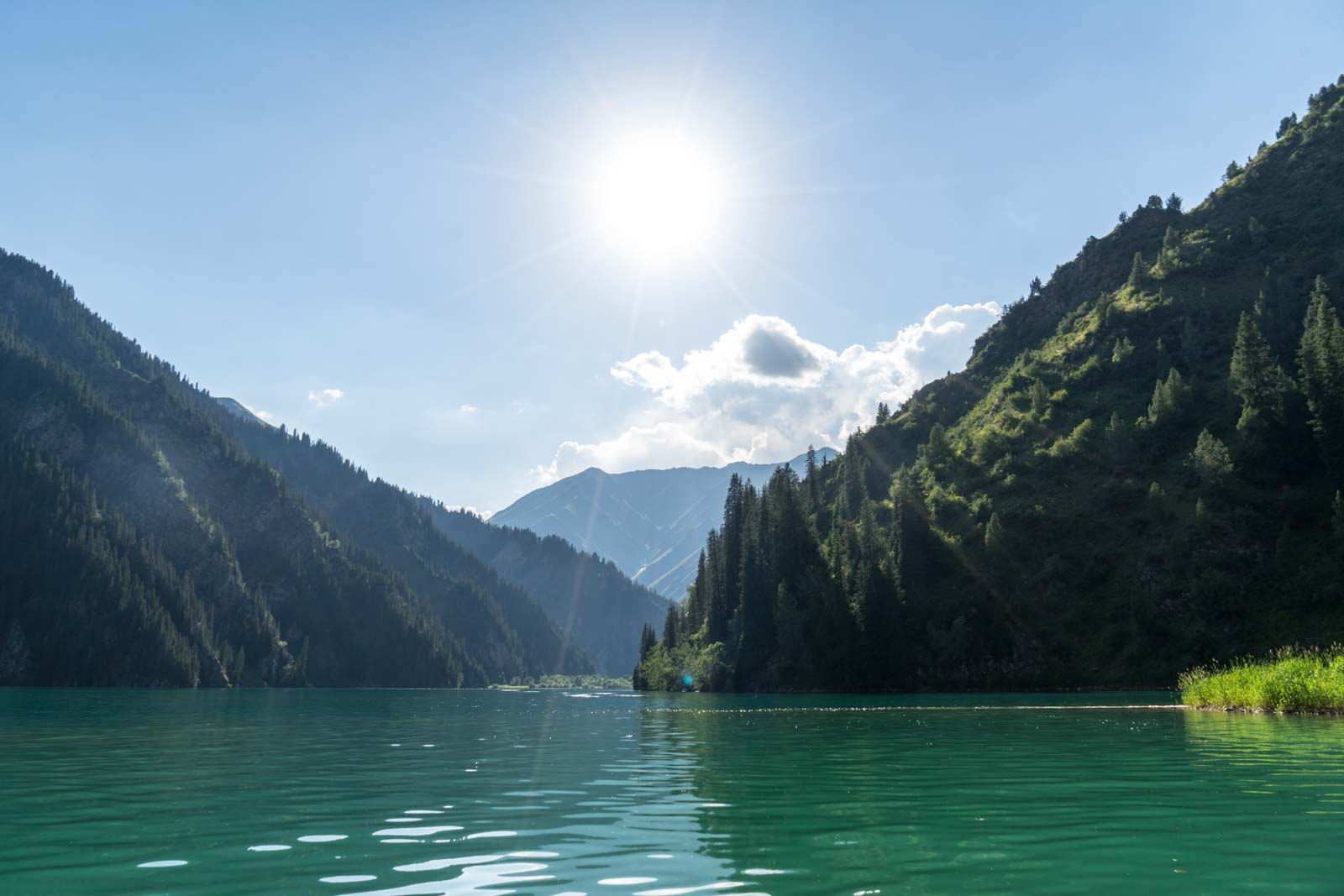 There has been some concern about the tourism and development that has started to appear at Sary-Chelek but, to be honest, I find that laughable.

It’s true that there seems to be no strategic planning about how any increase in visitor numbers to the lake should be handled. For now, though, the level of tourism is tiny compared to other protected lakes like this around the world.

Even with the road access, it’s not simple to get here. So long as one of the popular ways for foreign visitors like me to arrive is by horse or foot, along narrow trails through mountains, I think Sary-Chelek Lake is going to remain a very special gem of Kyrgyzstan.