You'll find several different areas to see in the Prague Castle complex. Let me walk you through the highlights of a visit.

This enormous complex at the top of the hill overlooking Prague is home to Prague Castle, St Vitus Cathedral, and some of the other most important buildings in the city.

The Guinness Book of Records has declared Prague Castle as the largest ancient castle in the world. It’s a bit misleading, though.

When I think of a castle, I tend to think of a single building – preferably with a moat and turrets.

In this situation, though, you need to picture a castle as almost a mini city, with dozens of buildings collected together and protected by a fortified wall.

If you’re going to call that a ‘castle’ then, yes, the one in Prague is enormous. It’s almost 600 metres long – and it can take a visitor like me a long time to explore it. 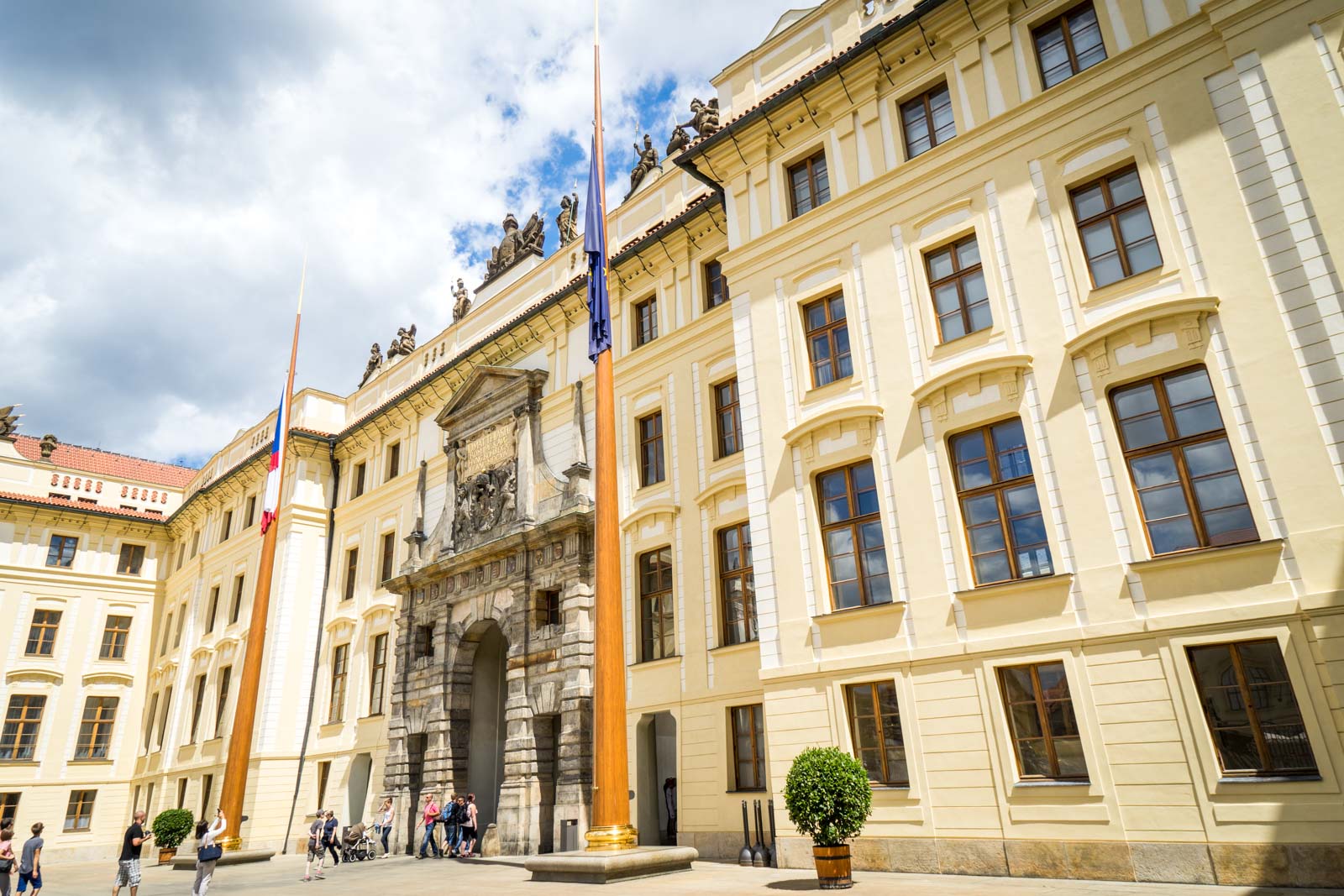 Up on a hill on the northwestern edge of central Prague, the castle is hard to miss on approach.

Most people will get there by crossing a bridge over the Vltava River and, as you look up, you’ll see the outline of the castle drawn by the steep windowed walls of official buildings and the spires of St Vitus Cathedral rising from behind them.

Going through the main gates, I’m struck by how crowded it is. I have found the Czech Republic to be oddly empty of tourists during the peak season – with the main exception of Prague, which seems to be ridiculously busy these days.

And Prague Castle… well, it’s probably the most popular tourist site in the city. 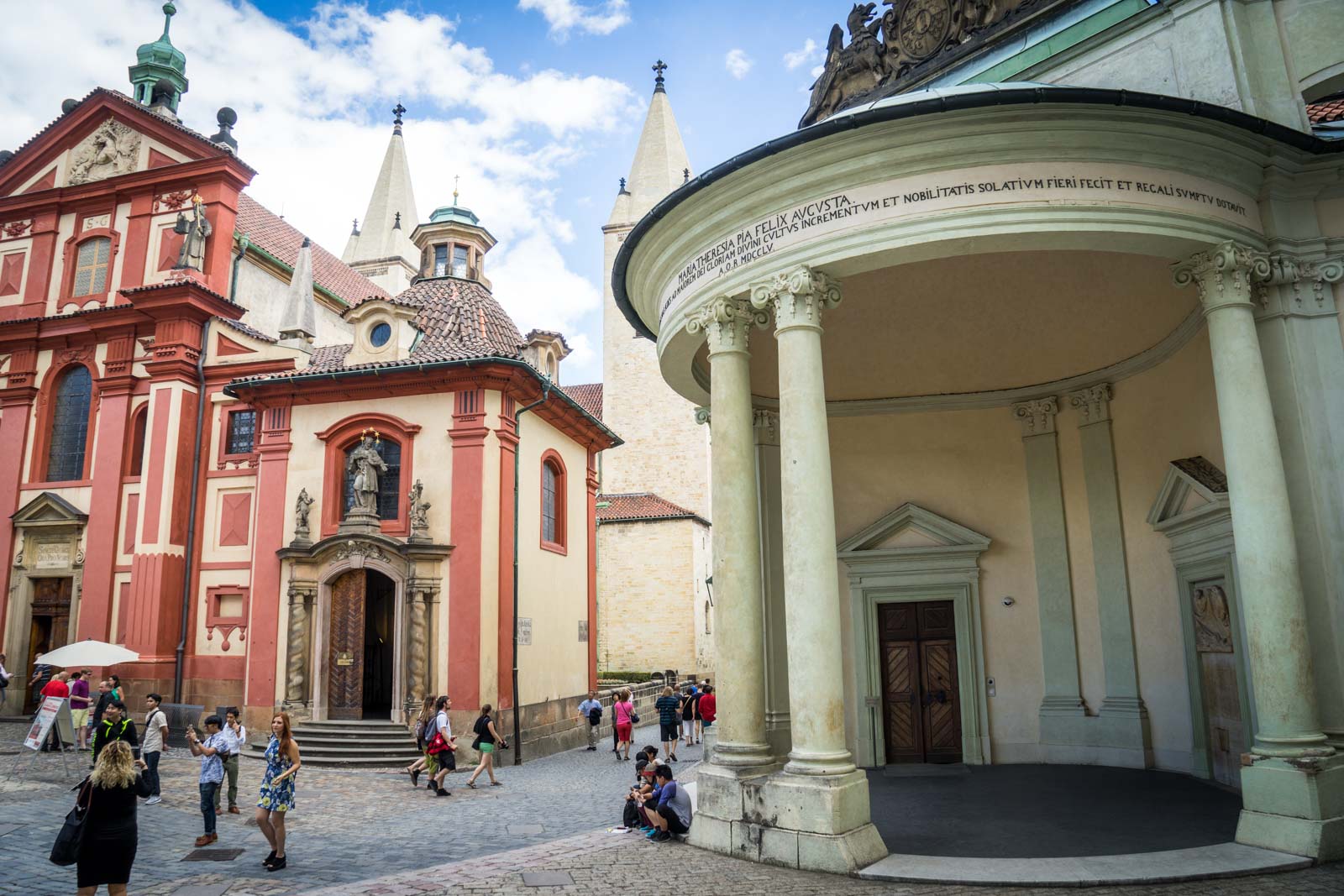 You can get into the main courtyard area without a ticket and at first I just wander around a bit, looking at the facades of the buildings, amazed as the scope of the complex.

But then I join the queue to buy a ticket to go inside some of the different areas.

There has been some kind of fort on this site since 870 AD and over the centuries new buildings have been added and extensive renovations and improvements have taken place. 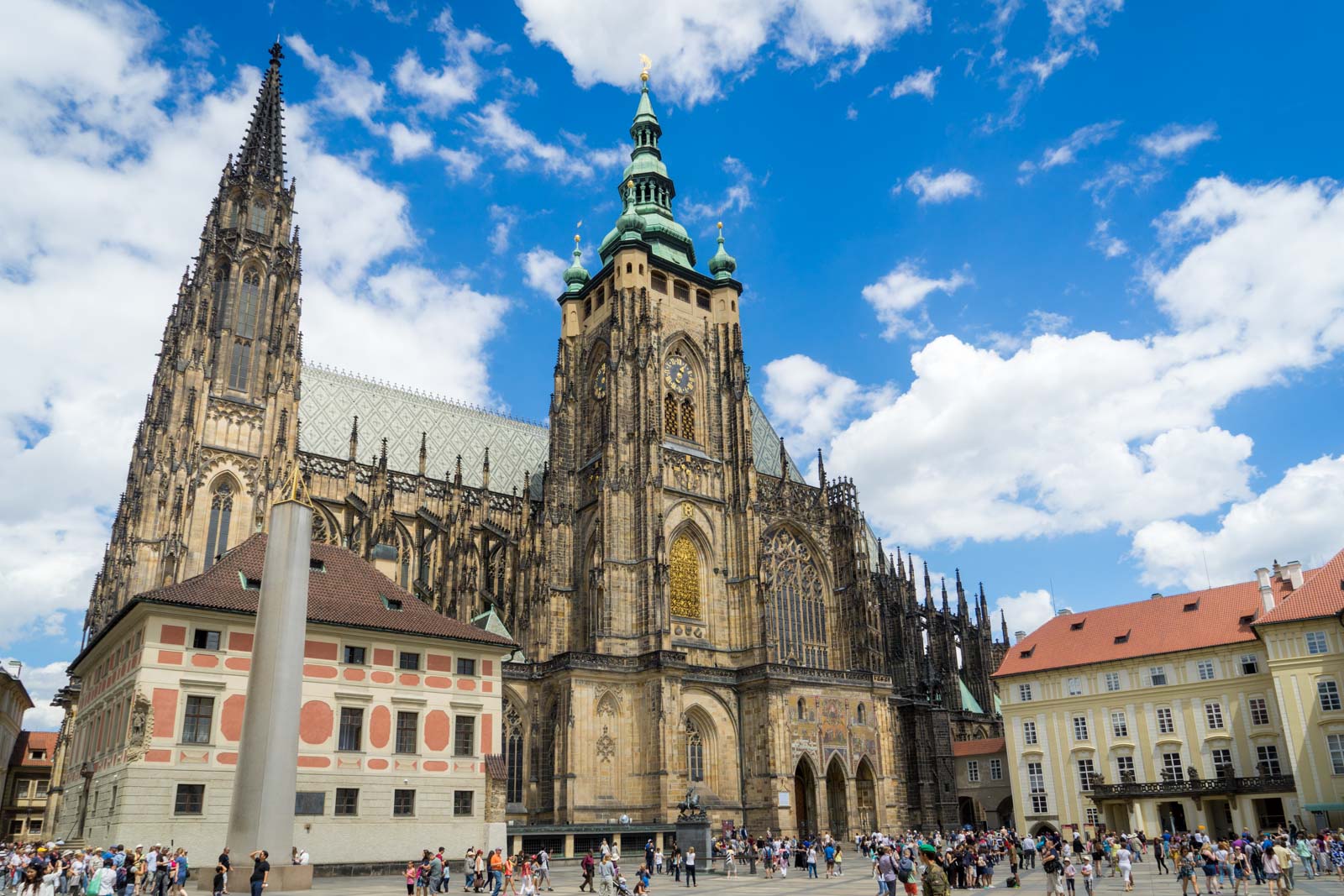 From the ruins of the Church of the Virgin Mary, the first building constructed here and the oldest church in the Czech Republic, through to the new designs of the art gallery which have been done in the post-communism era, you can trace the history of this land within the castle complex.

The standard entrance ticket gives you access to these places that demonstrate the different stages of the castle’s use.

The Old Royal Palace as it looks today was built in two main periods in the 14th and 15th centuries. It had an important ceremonial role with the large halls used for banquets and official functions.

The Gothic architecture has been preserved well and it is still used sometimes for events. 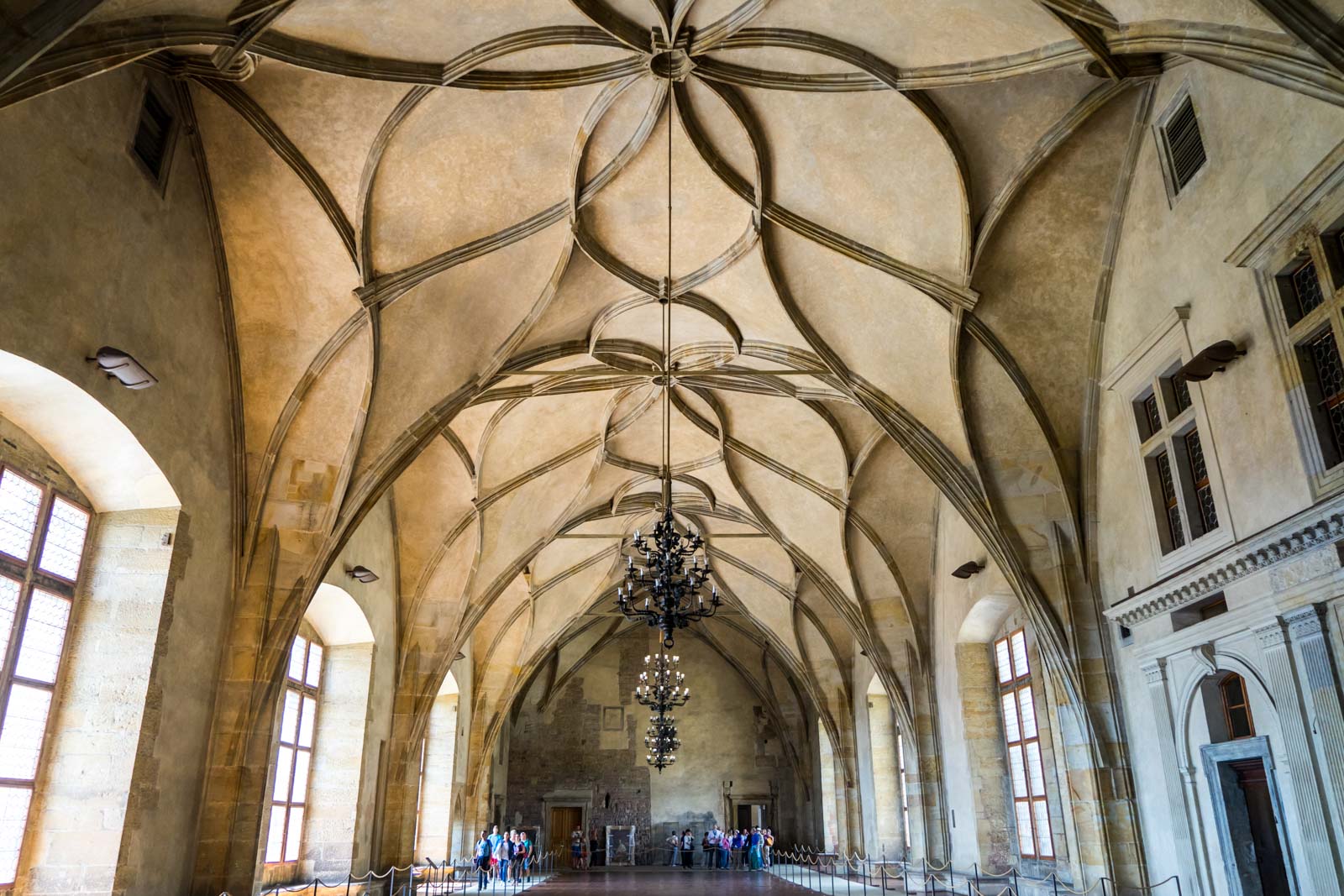 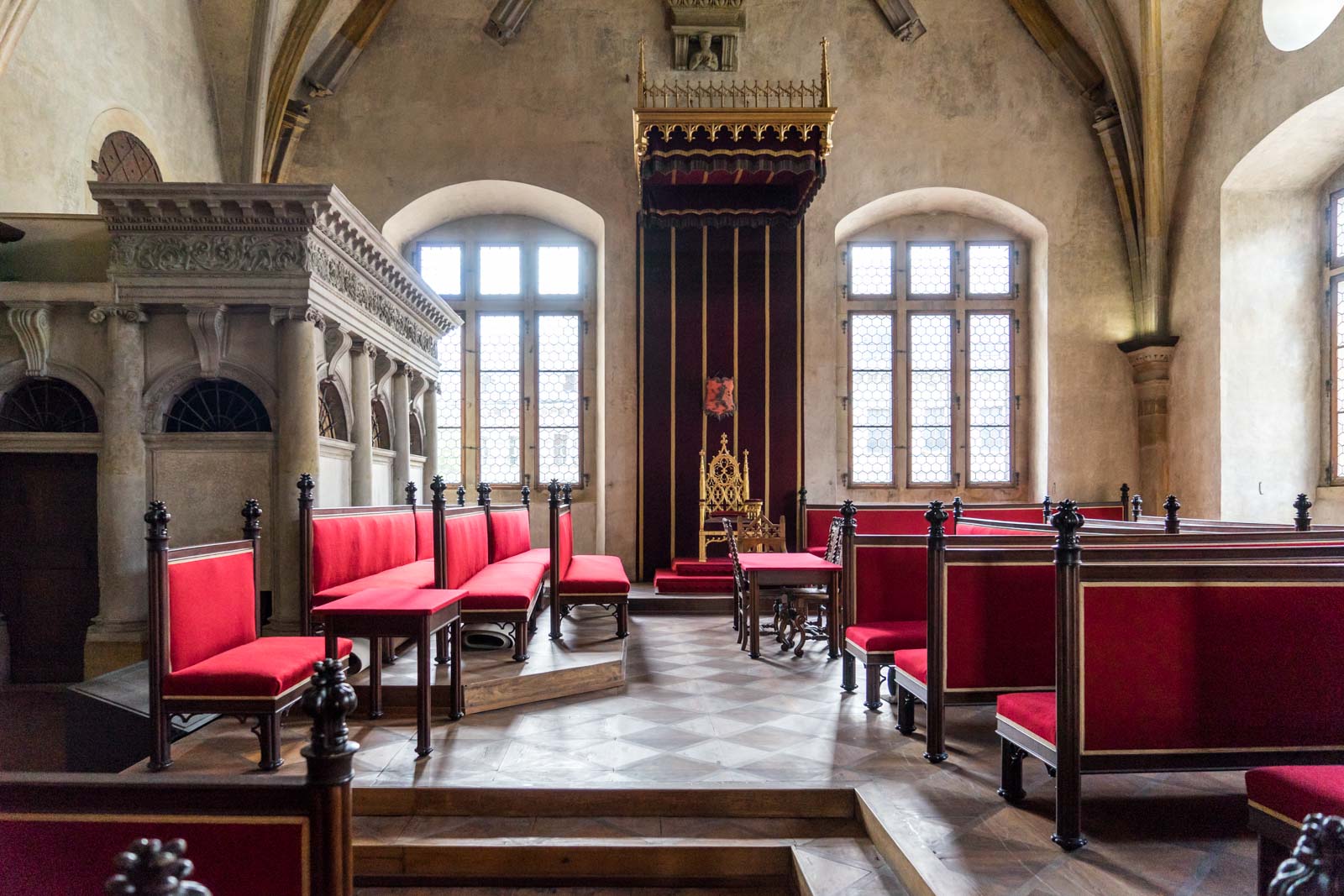 St George’s Basilica was the second church built on the castle site and was originally founded in about 920. The current building, though, is a reconstruction from 1142.

It has Romanesque architecture and a rather austere feel to the interior design. 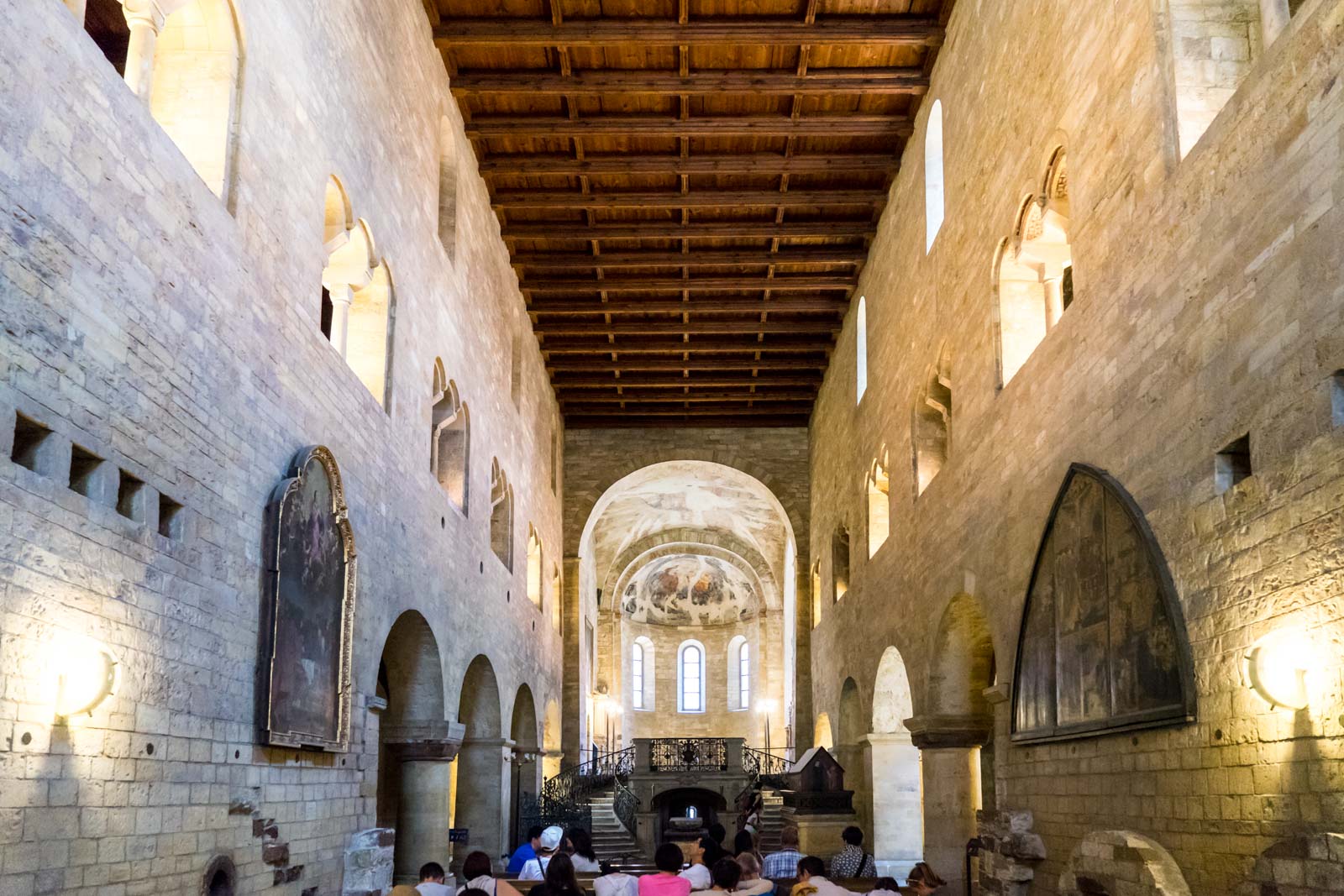 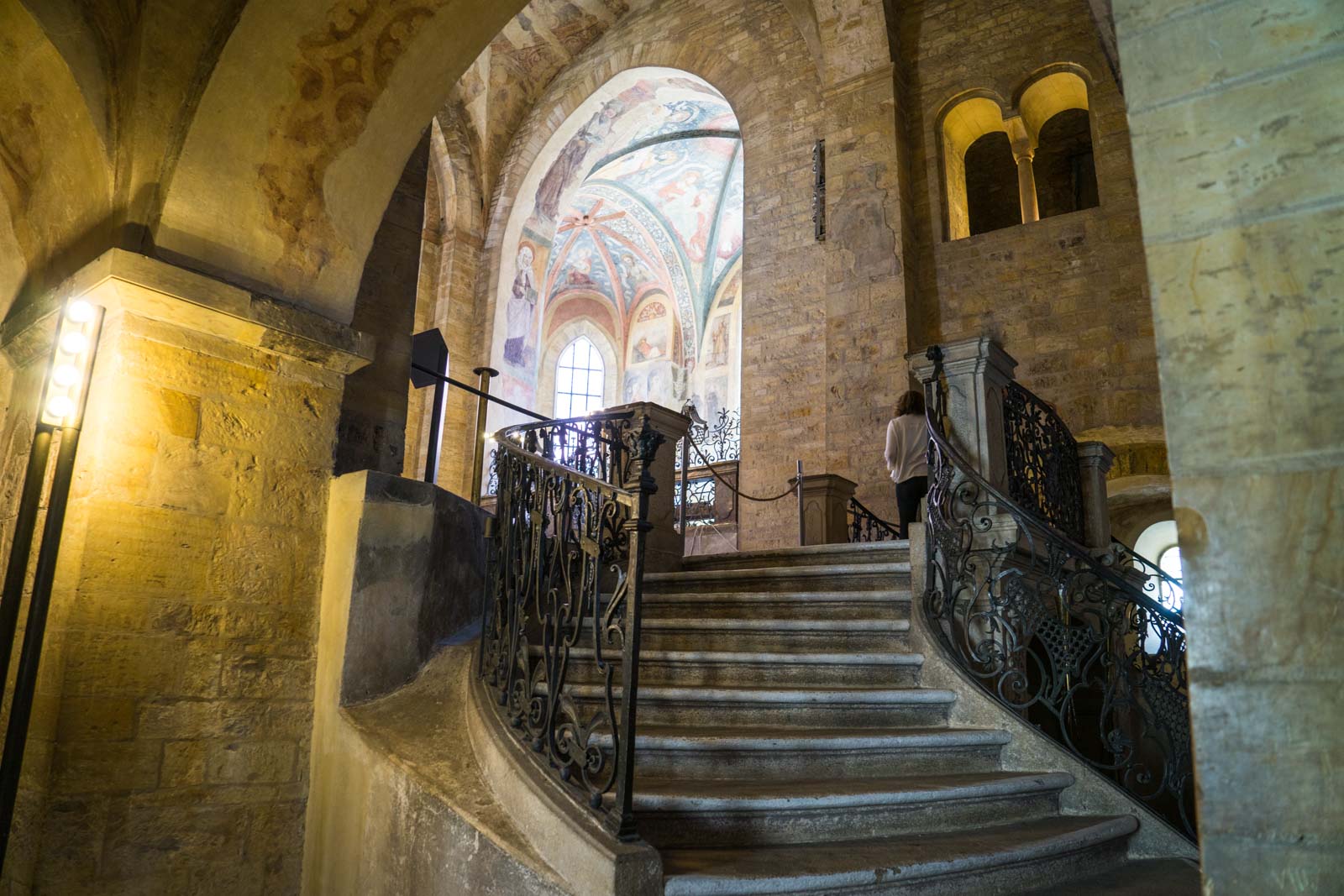 This section of the castle shows the accommodation of workers in the complex who lived in small houses in laneways over the centuries. The inhabitants were generally soldiers or tradespeople – such as goldsmiths, after whom this lane is named.

They were of a lower social status but important enough to be housed within the main fortifications. 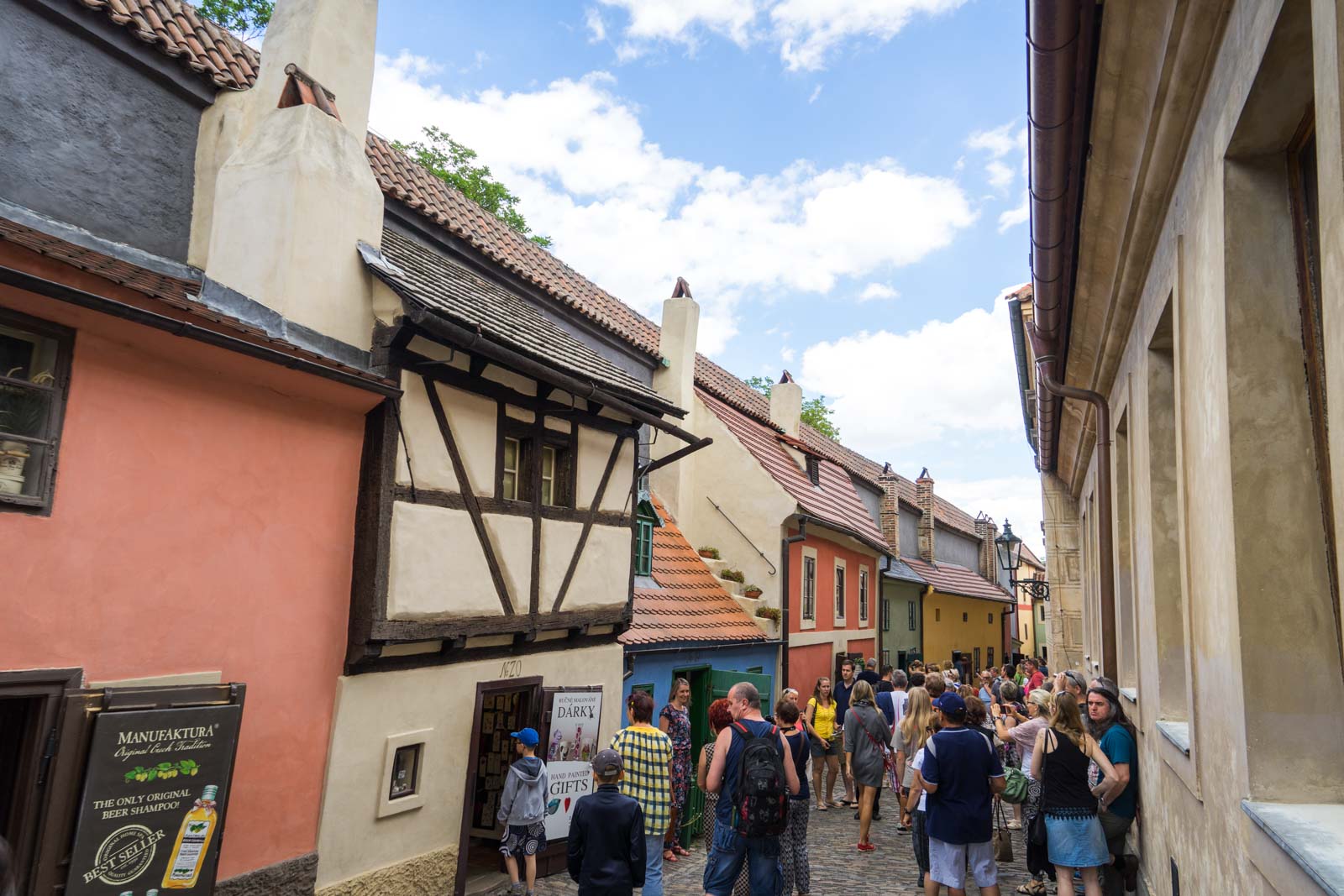 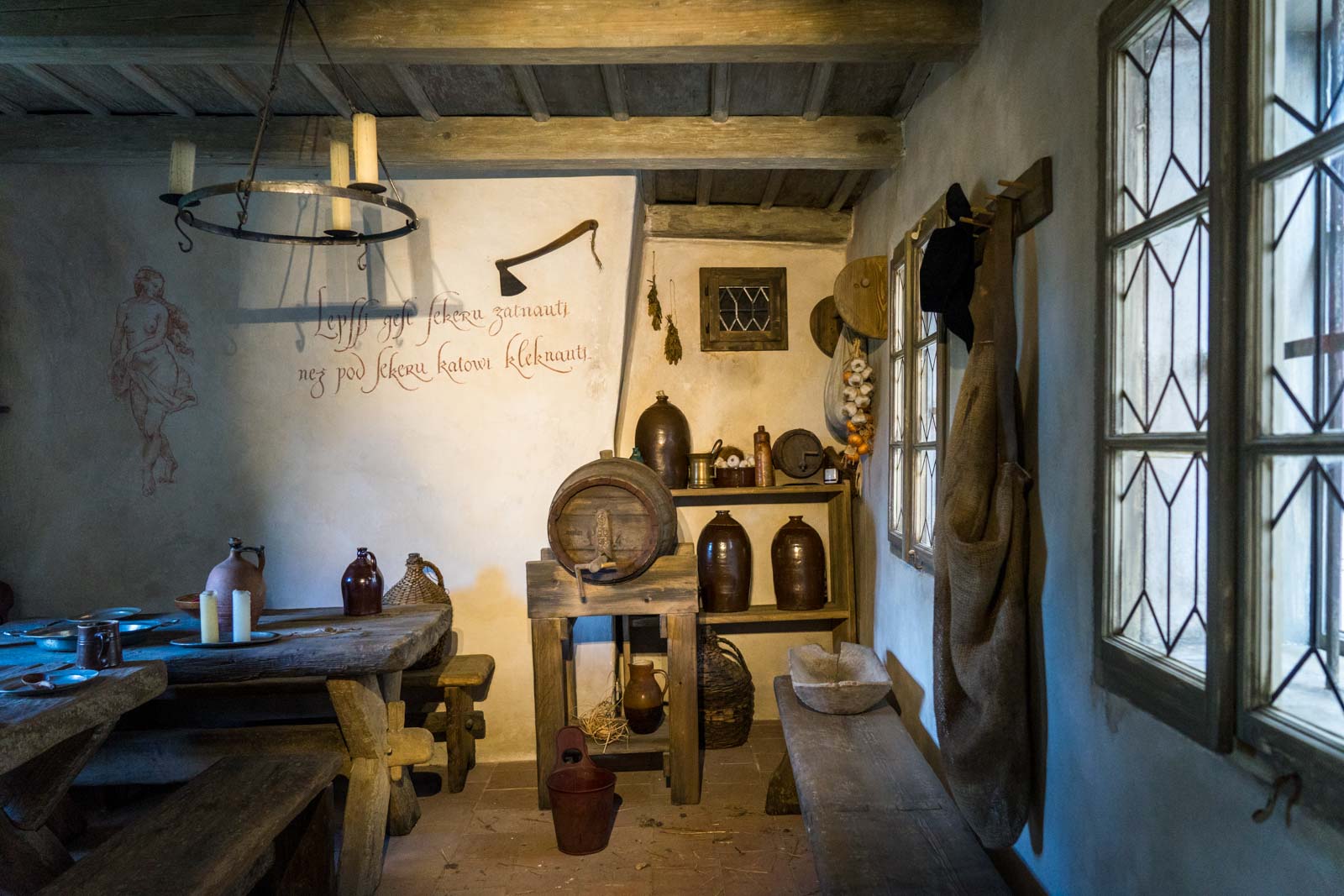 And then there is St Vitus Cathedral – my highlight of the castle and arguably the most important building within the complex.

St Vitus Cathedral is the biggest church in the Czech Republic and has a long history. It’s not a simple history, though.

Construction of the cathedral started in 1344 but it wasn’t actually finished until 1929. For most of this time, it was in use but with large sections still to be built. 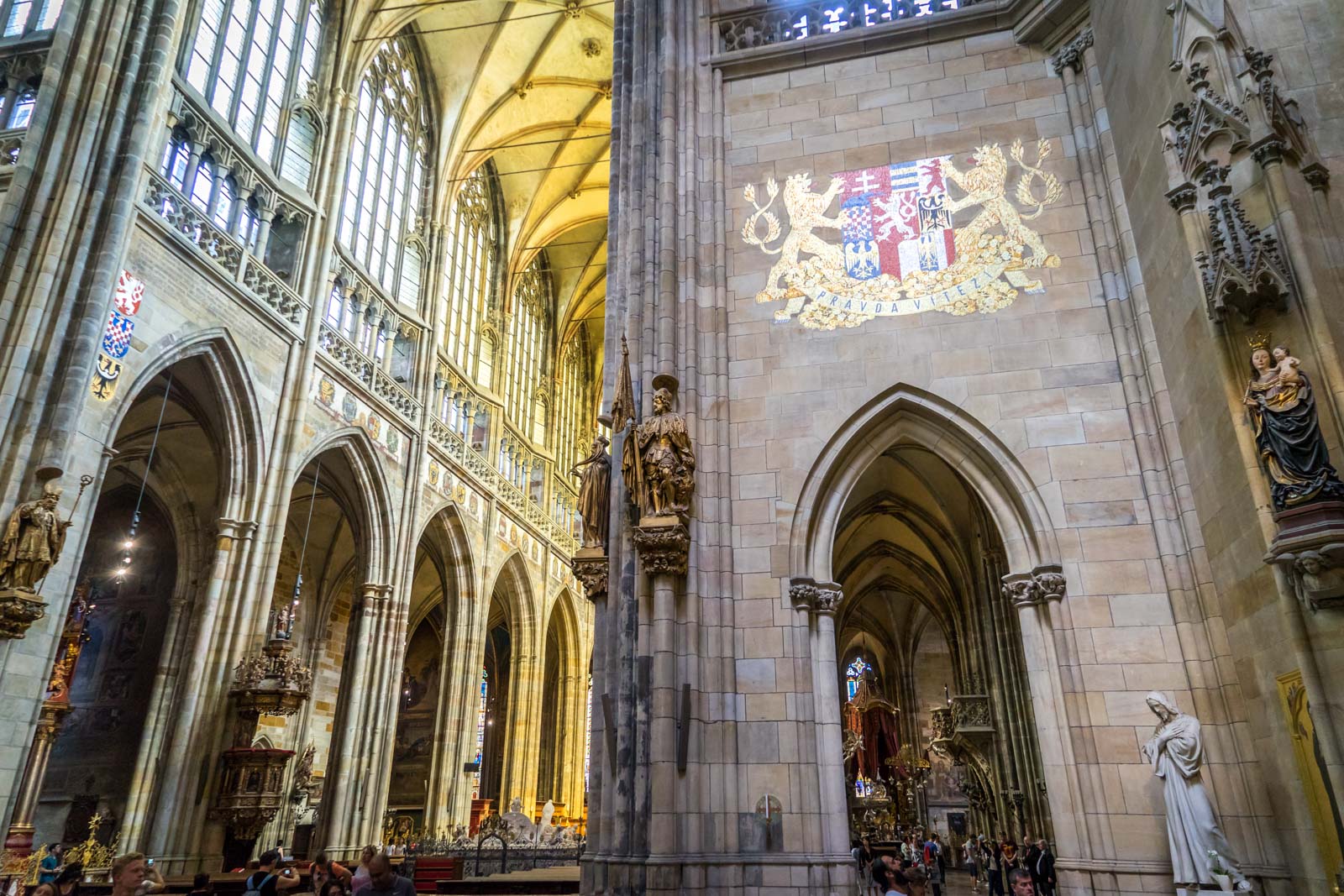 Now that it is finished, it’s an incredible building on the inside – tall vaults with diagonal ribs, peculiar column designs, vibrant stained glass windows and statues throughout.

Within these walls, the coronations of Czech kings and queens have taken place. Buried underneath it are several Holy Roman Emperors. 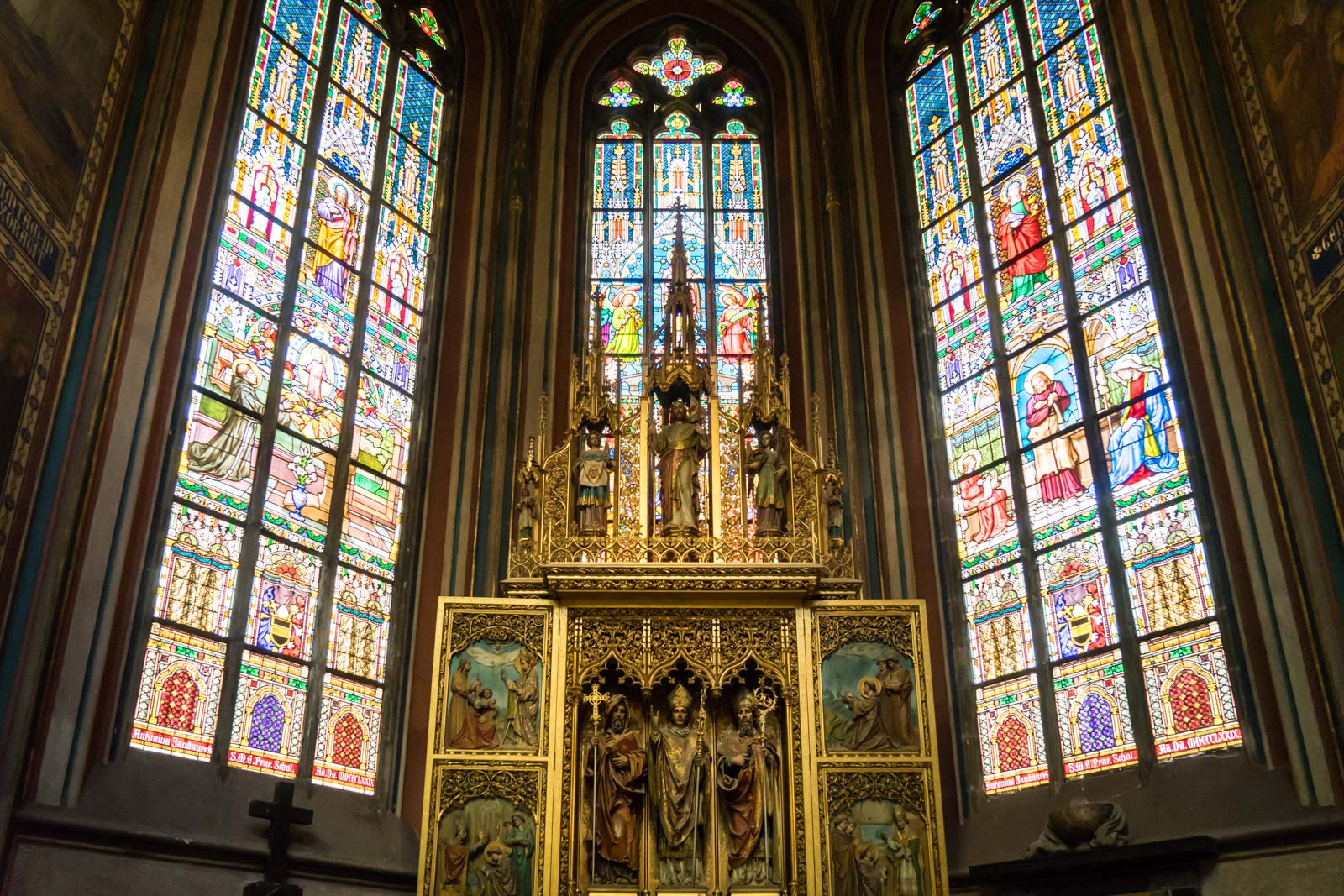 I find Prague overall to be such a beautiful city. The central area is full of interesting architecture that captures my eye as I wander through the winding streets. There’s so much to see and learn about when you step through the doors of these buildings.

Prague Castle and St Vitus Cathedral are the sort of places where you’ll learn much more with a guide and so, if that’s of interest to you, I would recommend one of these options: 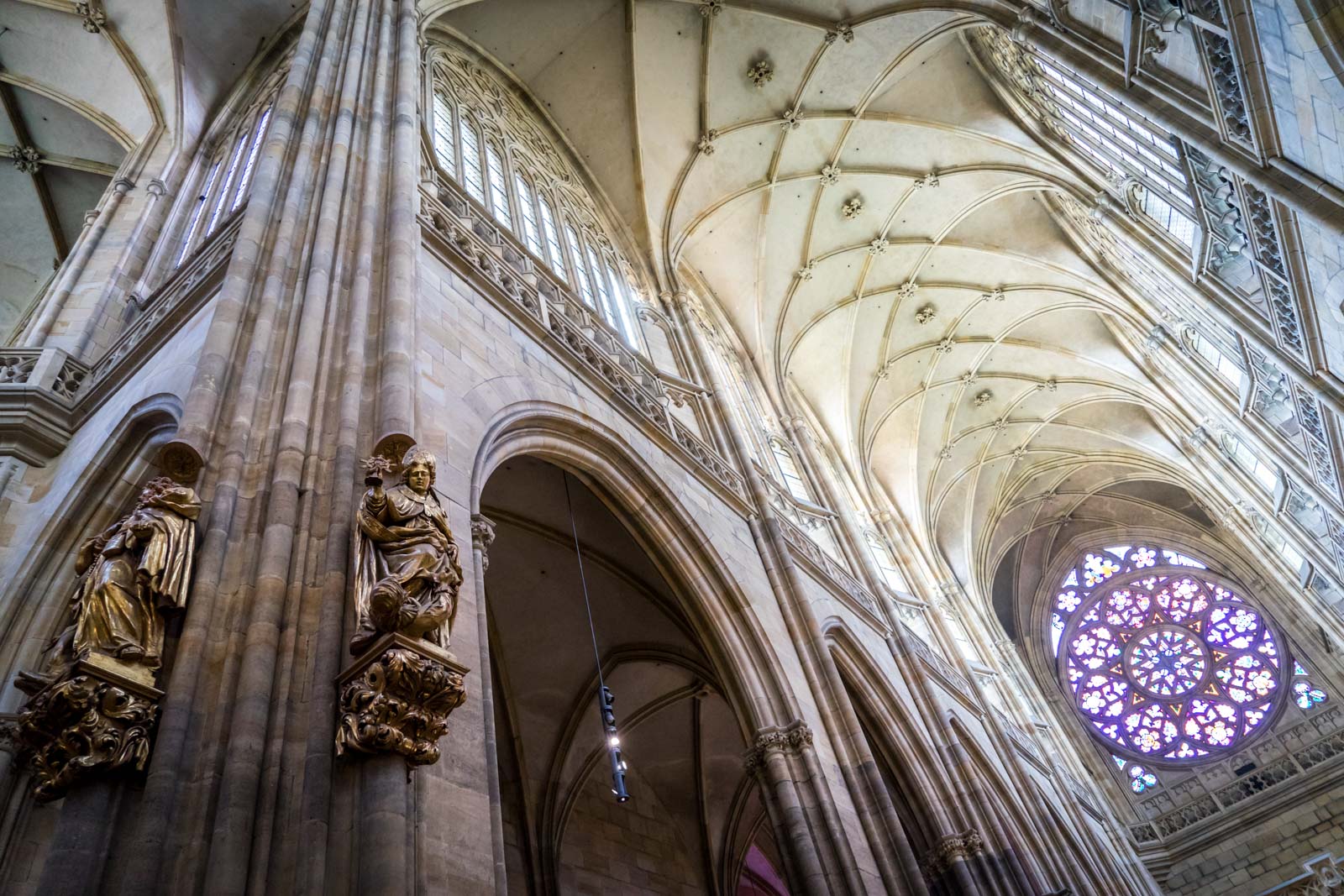 Prague also has a modern side to it, with an emerging culture that straddles the best of Eastern and Western Europe. These are the things that are making the city such a popular destination for visitors.

>> Read my story on how to spend a day in Prague

But, as I stand at one of the castle’s viewpoints and look out at the urban centre below, I think that it does make sense to battle the crowds and begin a visit to Prague up here at this compound to understand the city’s story.

The Prague Castle complex is on the top of a hill in the northwestern part of the historic centre. You can see it on a map here.
If you're travelling to Prague Castle by public transport, the easiest way to get there is on the tram number 22, getting off at the stop called Pražský hrad.

The other option is to use the metro. It is on Line A at the stop called Malostranská.

I think it's also very pleasant to walk up to the castle from the town centre if you have time.

There are a few different options of tickets that give you access to different parts of the Prague Castle complex.

For Circuit A (St. Vitus Cathedral, Old Royal Palace, exhibition of The Story of Prague Castle, St. George's Basilica, Golden Lane with Daliborka Tower, Rosenberg Palace), the regular ticket is 350CZK (US$17) and concession is 175CZK (US$8.50).

And for Circuit C (Exhibition of The Treasure of St. Vitus Cathedral, Prague Castle Picture Gallery), the regular ticket is CZK350 (US$17) and concession is CZK175 (US$8.50).

For more information you can visit the official website.
If you’re looking for a budget option, I would suggest the Post Hostel which is modern and friendly.
For something good value and a bit local, Family Lorenz & Coffee House is a great place.
For a cool and stylish option, you should try Design Hotel Jewel Prague.
And if you want to splurge for somewhere really cool, have a look at the BoHo Prague Hotel.