There’s nothing around but the rolling green fields of the Bavarian countryside. Oh, and the white church on a hill.

Its neighbours are cows, who lazily chew their cud, and horses that look at me expectantly as I walk past

The Wieskirche Church is in an odd location, with hardly a parishioner for miles around it. But it’s not a church designed for local worshippers. It’s for the pilgrims. 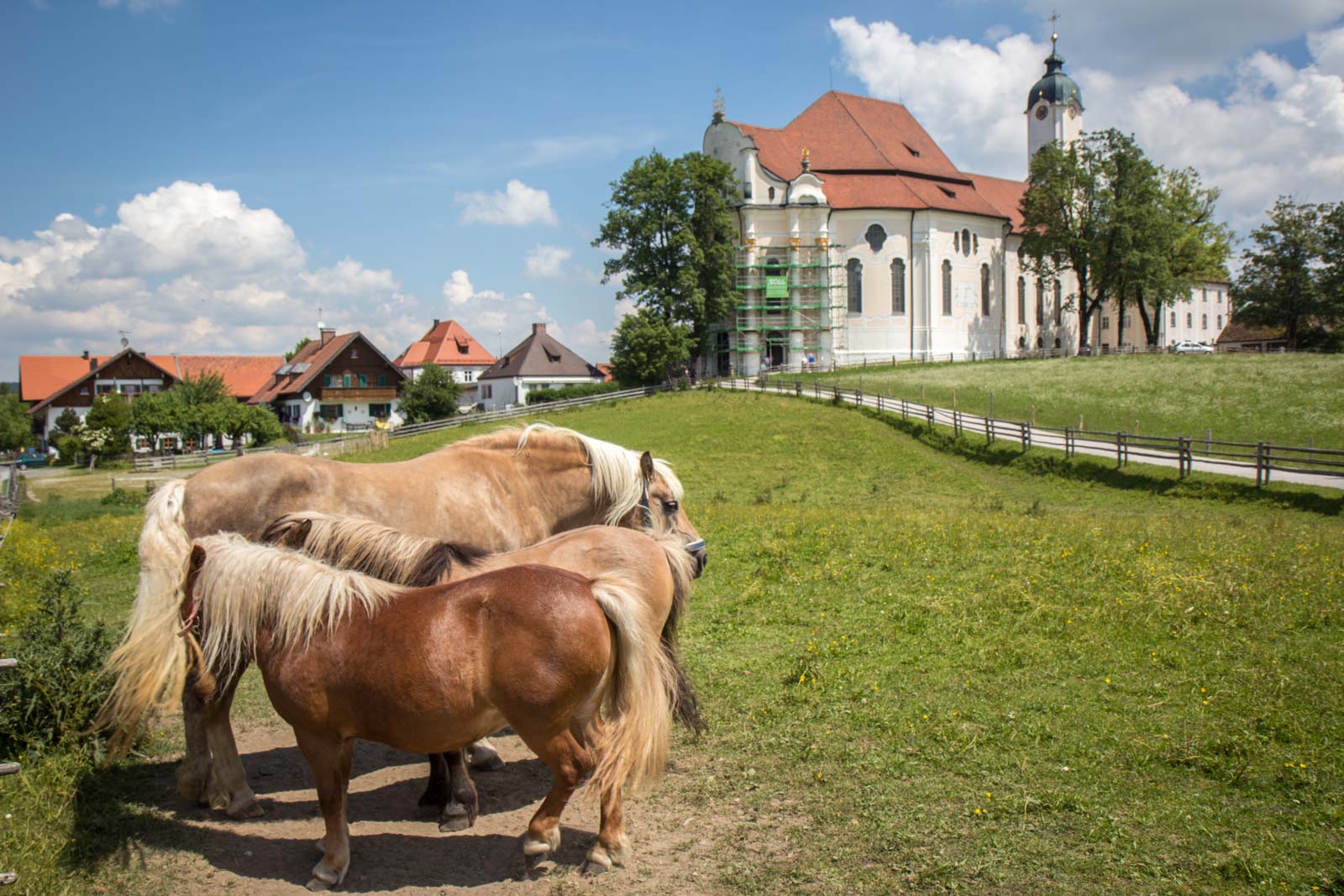 It was built between 1745 and 1754 after tears were apparently seen coming from a wooden statue of the Flagellated Christ. A true miracle, it was declared.

And the source of such a miracle needed an appropriate building to house it – the small chapel that was originally erected was not enough. 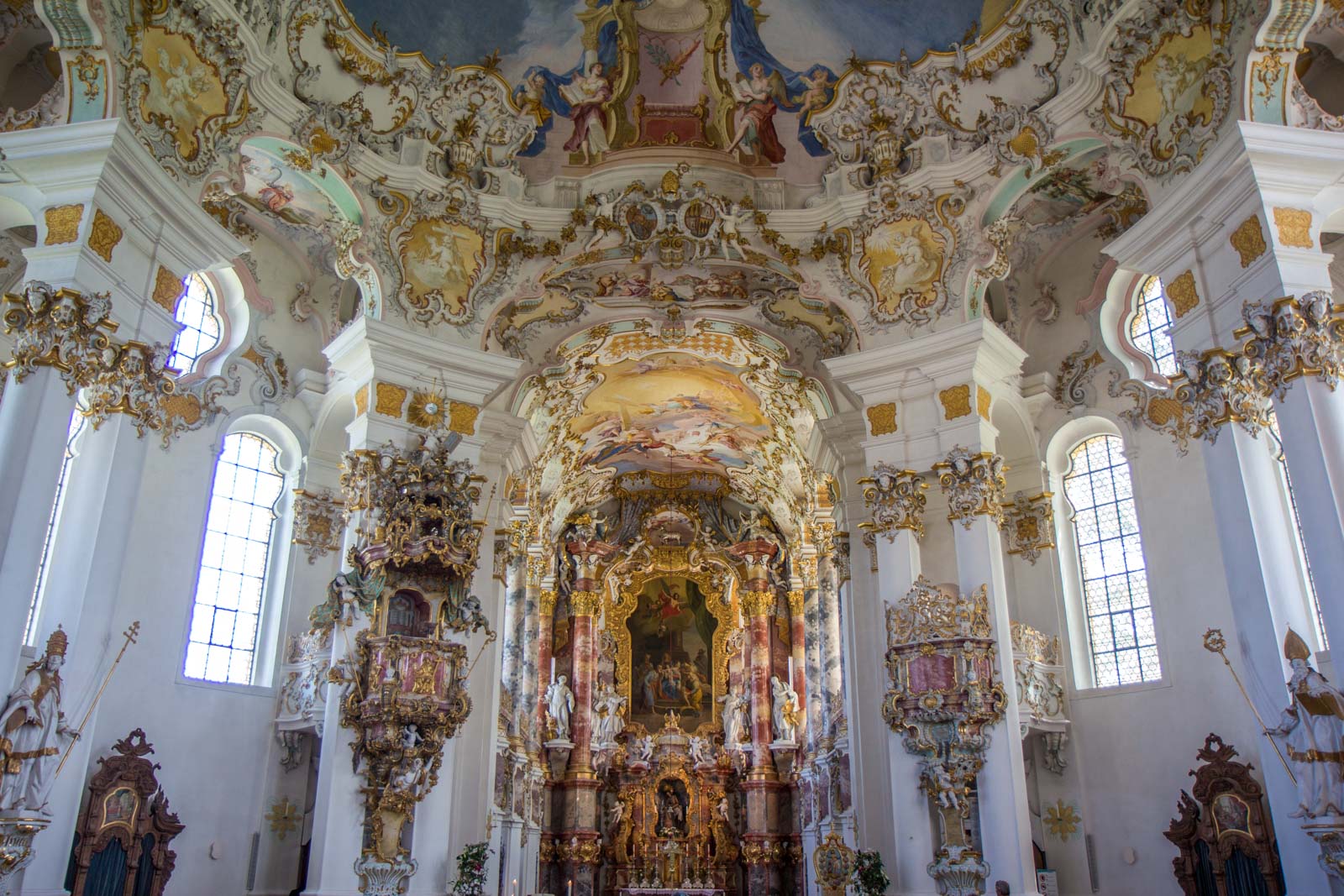 The new building needed to be bigger because the number of visitors coming to see the statue was increasing. But there was more to it than that.

It needed to be impressive – but in a way that didn’t seem ostentatious in the 18th century countryside.

That’s why it is the interior of the church that is so special. 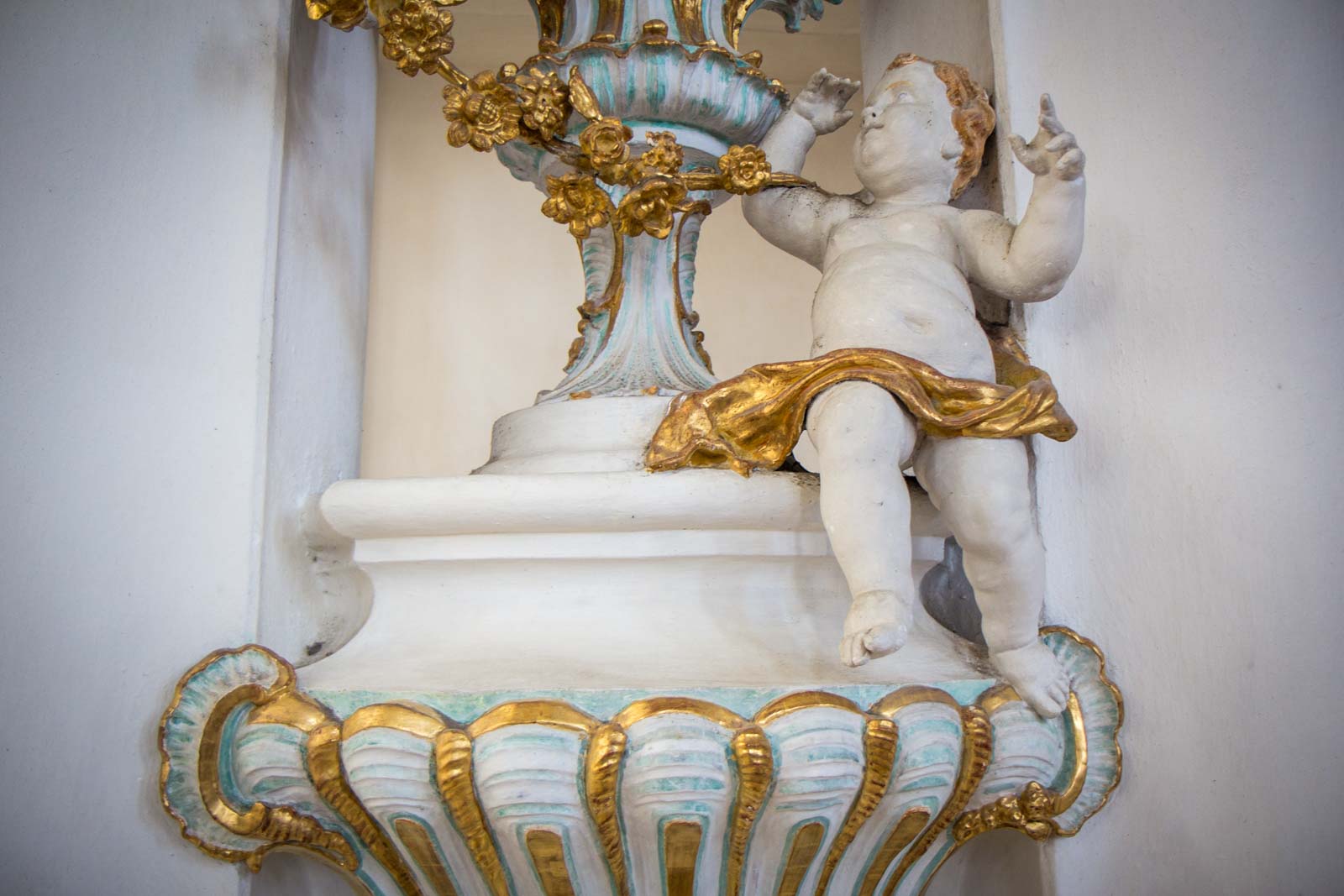 From the outside, the Wieskirche Pilgrimage Church feels tranquil, with soft rounded white edges. Inside is an explosion of colour and intricate detail.

The interior of the church is decorated in what is considered to be one of the best examples of rococo architecture in this part of Germany. 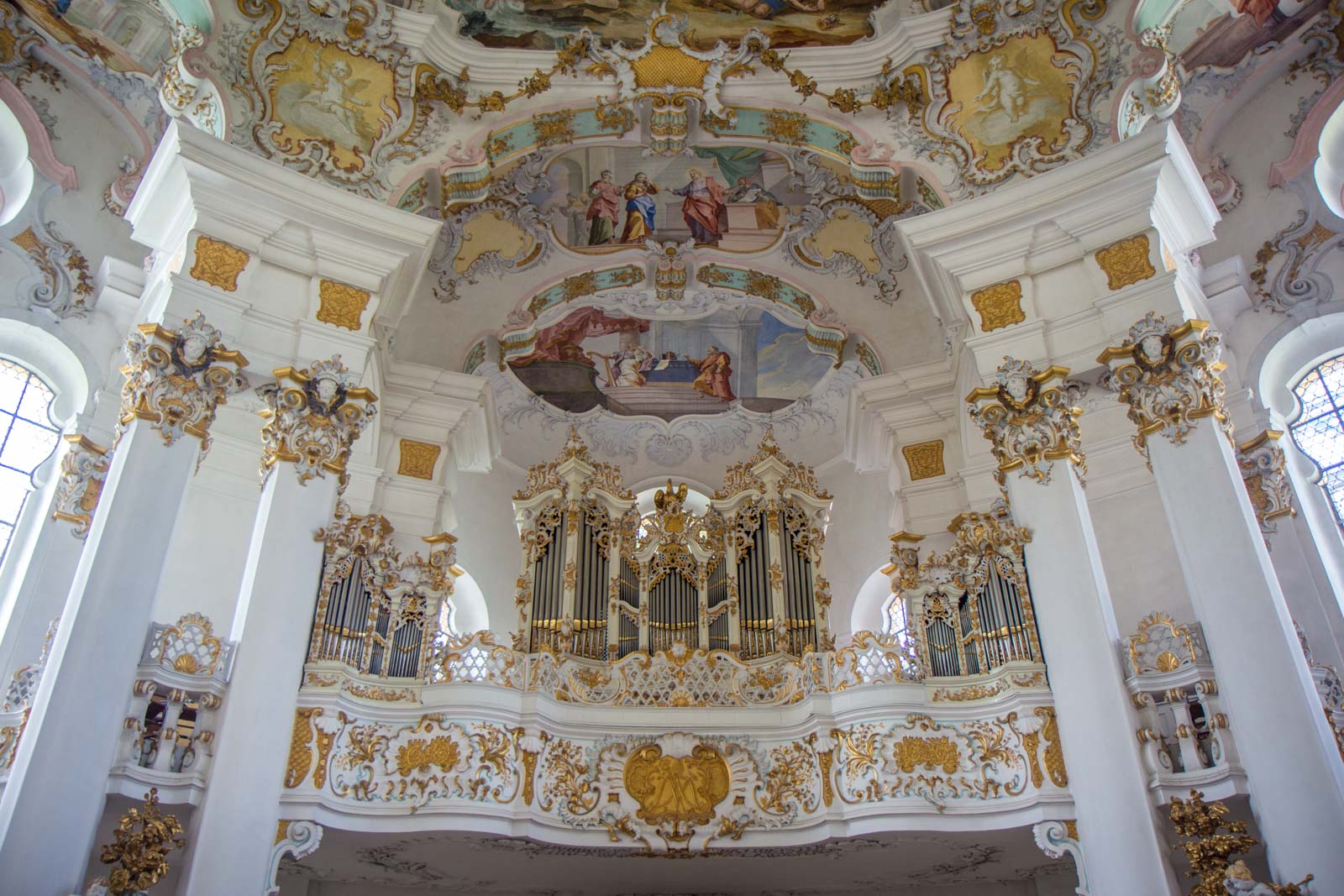 Painted ceilings, statues, golden trims and complex plasterwork fill the main section of the building. Around the altar, the colours and artwork become even more intense. 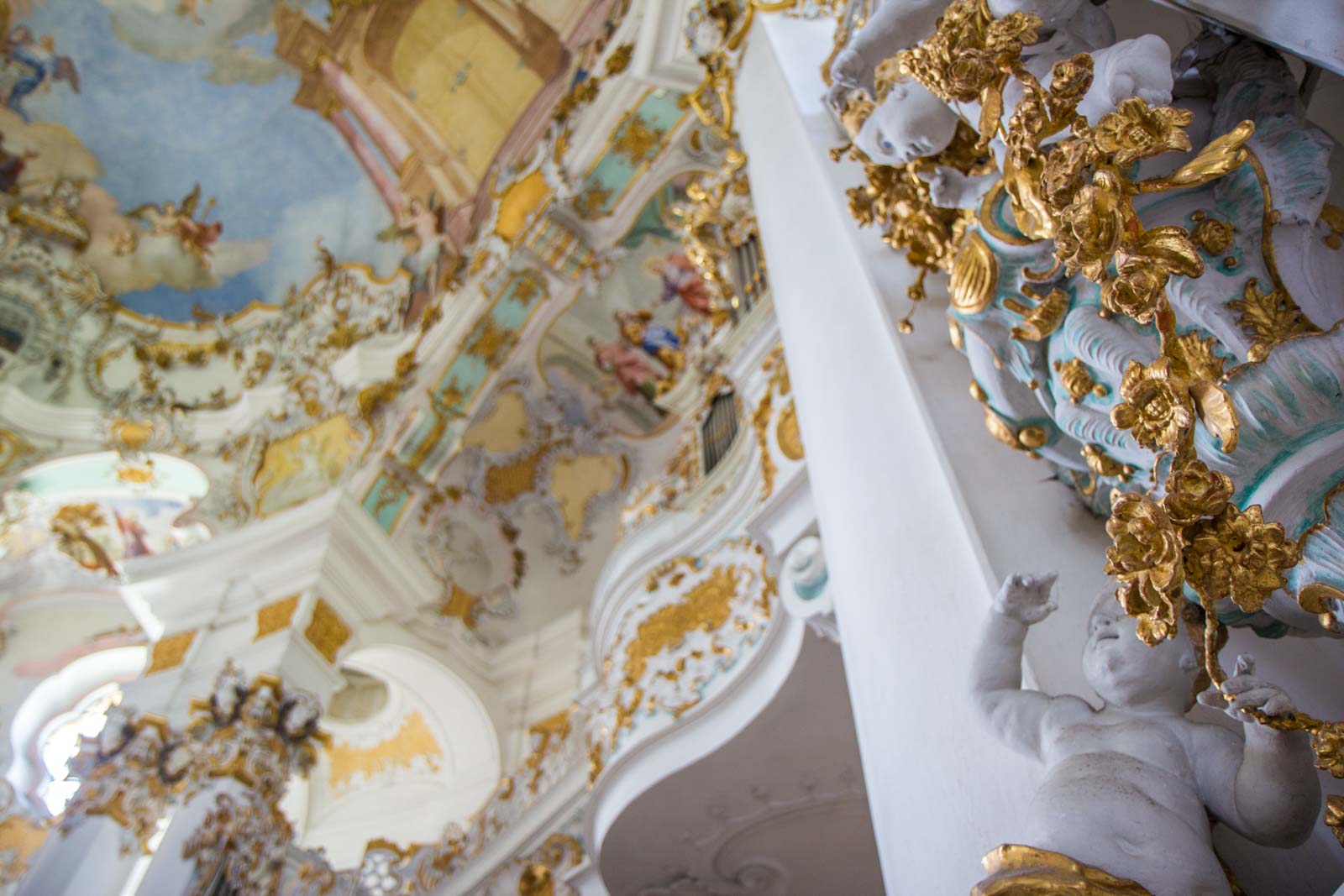 During the 18th century, the Wieskirche became one of the most important pilgrimage sites in Europe. Many of those who came and prayed to the wooden statue of Jesus claimed they were miraculously cured of diseases… and so even more came.

The little white church on the top of a grassy hill offered salvation to the flocks that walked here past the ones that grazed here. 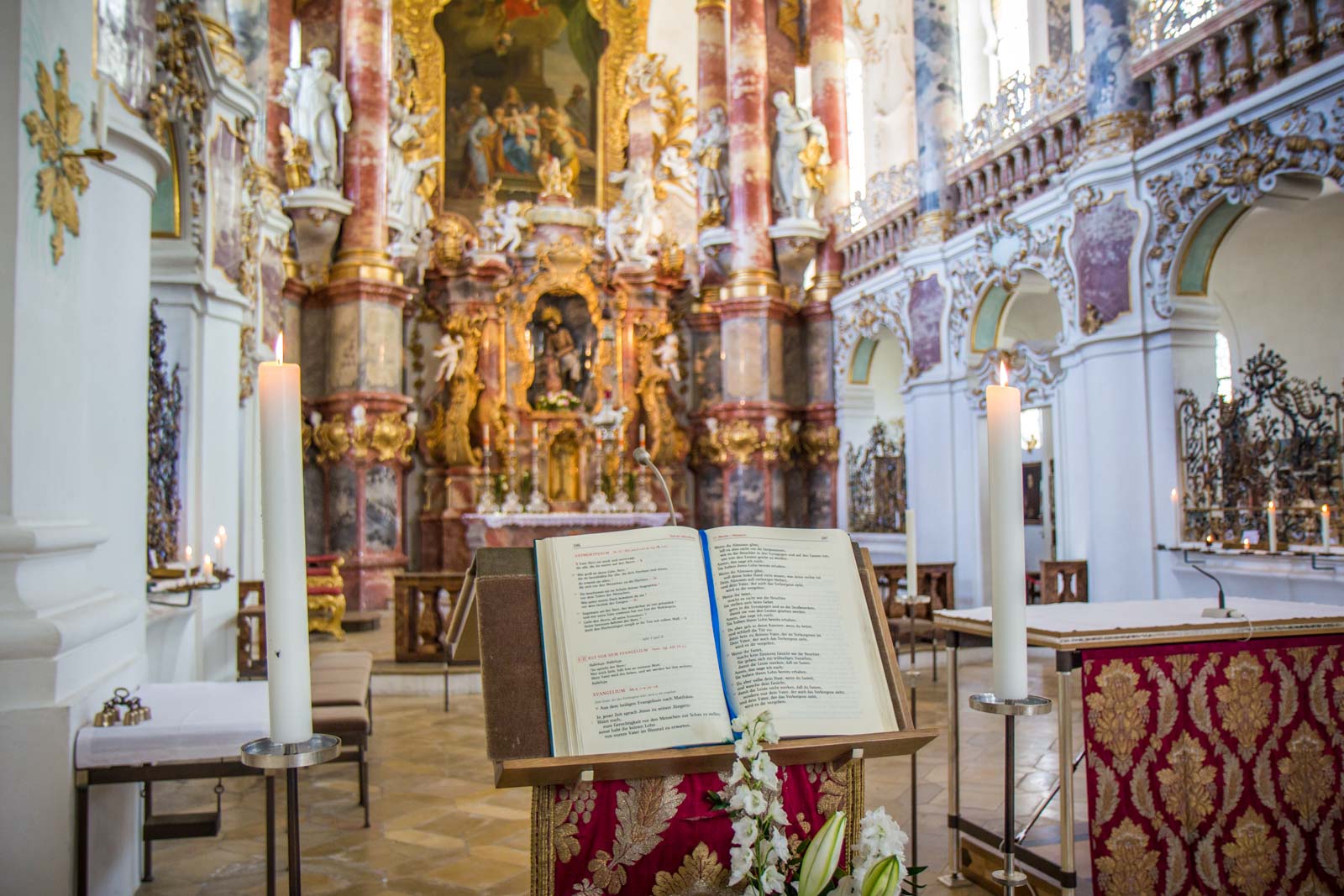 The interior design and associated art are intended to reflect the spirituality of this pilgrimage and show themes of suffering and penance.

The main ceiling fresco of the resurrected Christ and the door to eternal life shows the central theology that redemption is born from sacrifice. 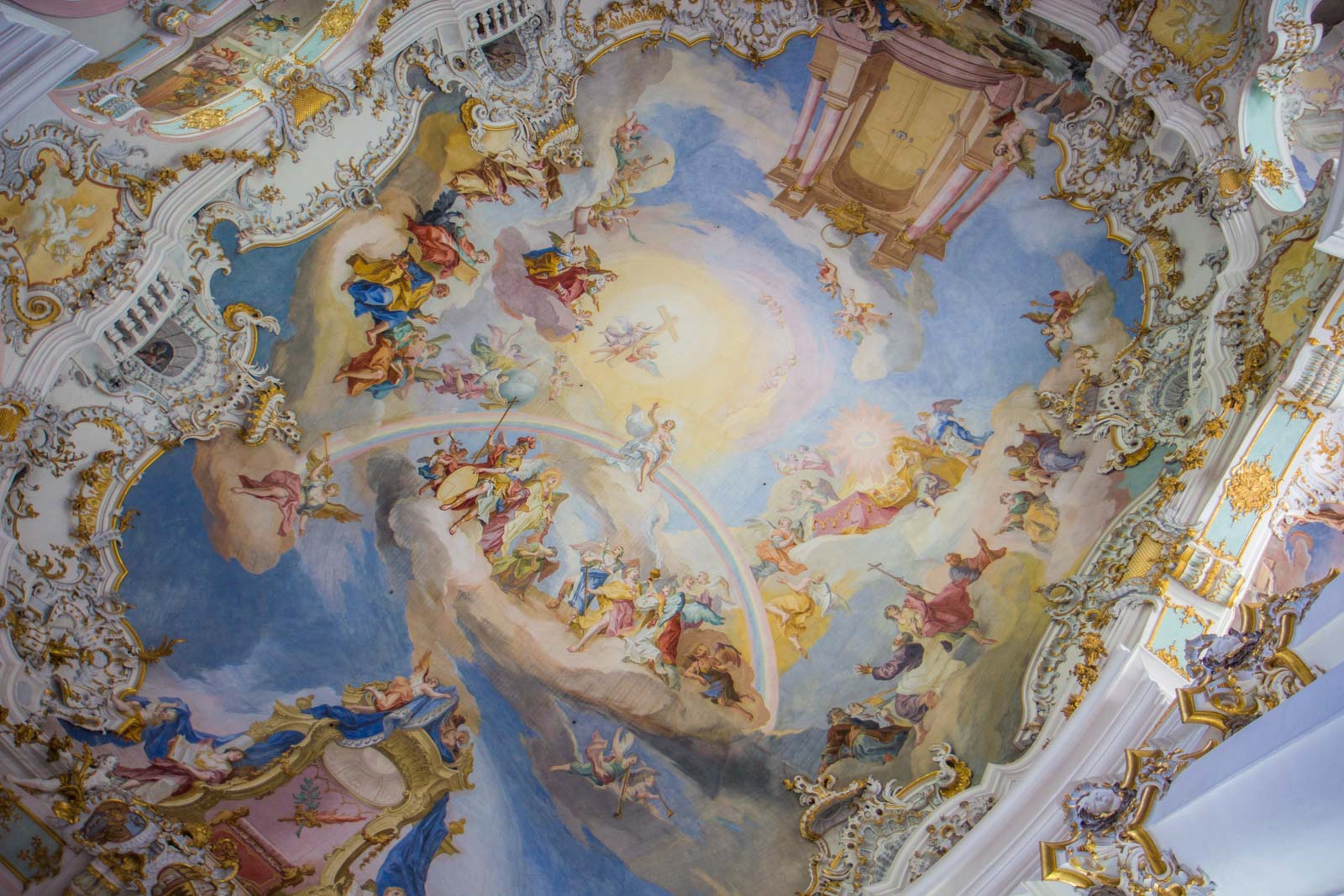 The closest main tourist town to the site is Füssen and most visitors will set out from there to visit the church.

There are a lot of other interesting places to see along the way, including the famous Neuschwanstein Castle. It’s easy to make a day trip around this region and include the Wieskirche as part of that.

Although there’s very little around the church itself, there is an excellent restaurant right next to it serving traditional Bavarian food inside or outside. 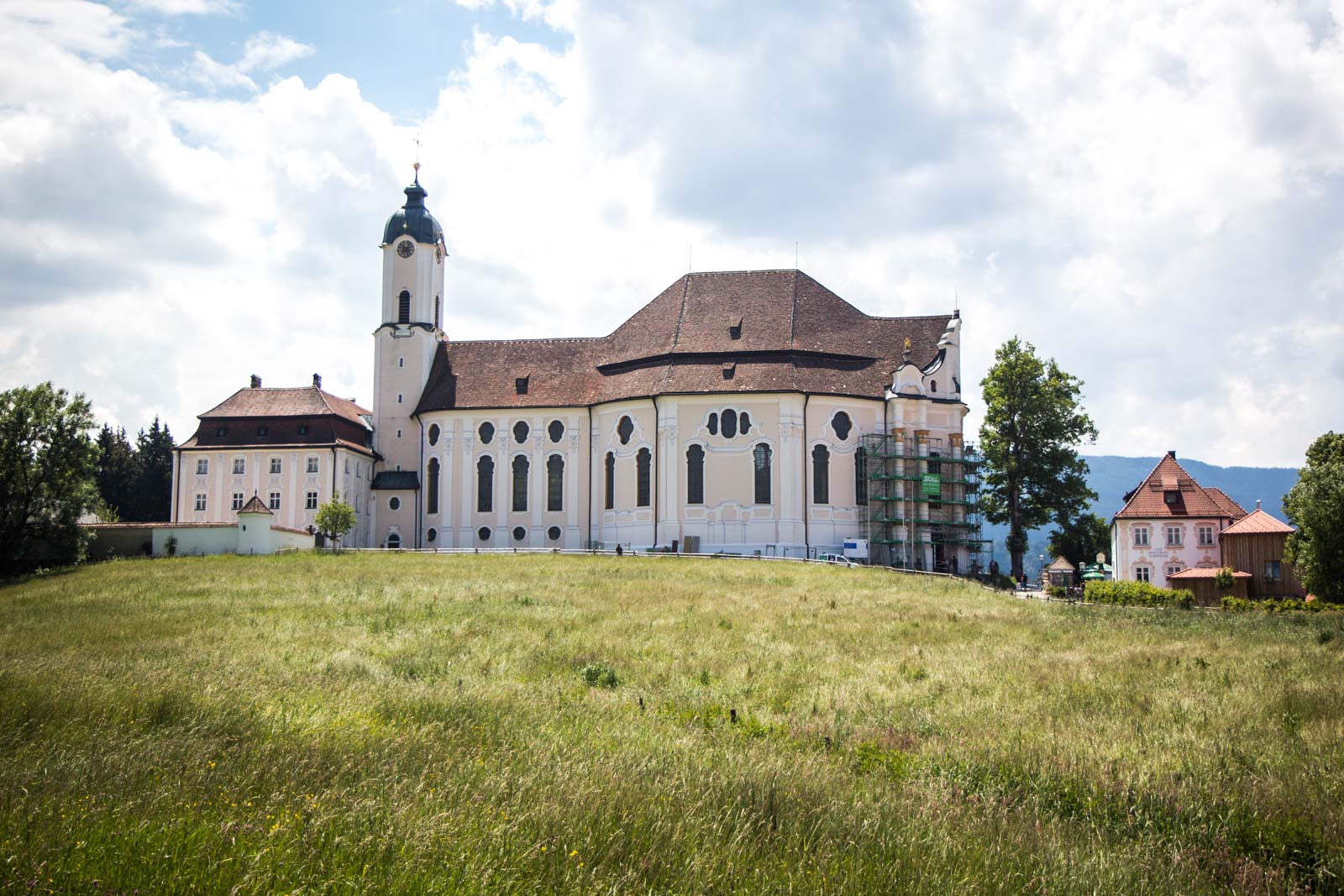 The church itself is small and only takes a few minutes to walk through. However, you should give yourself at least 30 minutes to look properly at all the frescoes and artwork decorating the interior. There are a lot of small details that take time to become obvious.

The Pilgrimage Church of Wies is located at:
Wies 12, 86989, Steingaden, Germany.
You can see it on a map here.
The church is open at the following times:
Summer: 0800 – 2000
Winter: 0800 – 1700
Entry to the church is free although there is a voluntary donation box.
To get to the Pilgrimage Church of Wies, catch the train to Füssen and then take the bus number 73 to the site, which takes about 40 minutes.
Yes, there are a couple of good tours that will show you the church and some of the other highlights around this part of Bavaria.?There is this day tour from Füssen that also includes the famous Neuschwanstein Castle.
?Or there is this ebike tour that you can get from Munich, which is a great way to see the countryside.
The best place to base yourself for a visit to the church is the nearby town of Füssen.?For a good budget option, I would suggest the DJH Youth Hostel right near the train station.
For a lovely but afforadble hotel, try Mainstation Hostel, also at the train station.
If you like the idea of somewhere a bit more fairytale, have a look at Hotel Fantasia.
Or you could treat yourself to the wellness and spa facilities at Hotel Sommer.
Combine a trip to the Wieskirche with a visit to Neuschwanstein Castle or one of the other sites along the Bavarian Romantic Route.
You can find out more information at the church's official website.