Sitting at breakfast at my hostel in the German city of Wittenberg, I’m joined at the table by some young guys about 20 years old or so.

We start chatting and it turns out they are students from the US and have come here for a field trip.

But to Wittenberg? I would understand if their trip was to Berlin or Munich or even somewhere like Nuremberg. It seems odd to come all the way here, though.

As we chat it becomes apparent that actually the same thing that has brought me to Wittenberg is what they’ve come to see on their trip. These young Americans are all religious studies students and they are here to learn more about Martin Luther. However, I was slightly doubtful when it was first said to me. As I chat with the students, though, I start to see how important this man was in the history of modern Europe. The Luther House here in Wittenberg provides more clues and I visit it after breakfast. It is the Augustinian monastery where Luther lived as a monk and then with his family, after he bought it.

The building is full items directly related to Luther – his desk and pulpit, for example. There are also important documents from the history of the German Reformation that he caused. The (very) short version of Martin Luther’s story is that in the early 1500s he challenged the Catholic Church for what he saw as greed and corruption. This was a period when the church was doing things like selling documents that gave forgiveness for sins (called indulgences).

He translated the Bible from Latin into common German and made it more accessible for the average citizen. In effect, he was trying to devolve power from the Pope and the Vatican and make Christianity more about God and the original teachings. Just down the road from the Luther House is the Castle Church where Luther is said to have performed one of his most famous acts.

On the church doors, he nailed a document in 1517 with his 95 theses against the problems he saw in the Catholic Church.

This is seen as a key moment in the beginning of the Reformation and the emergence of Protestants. 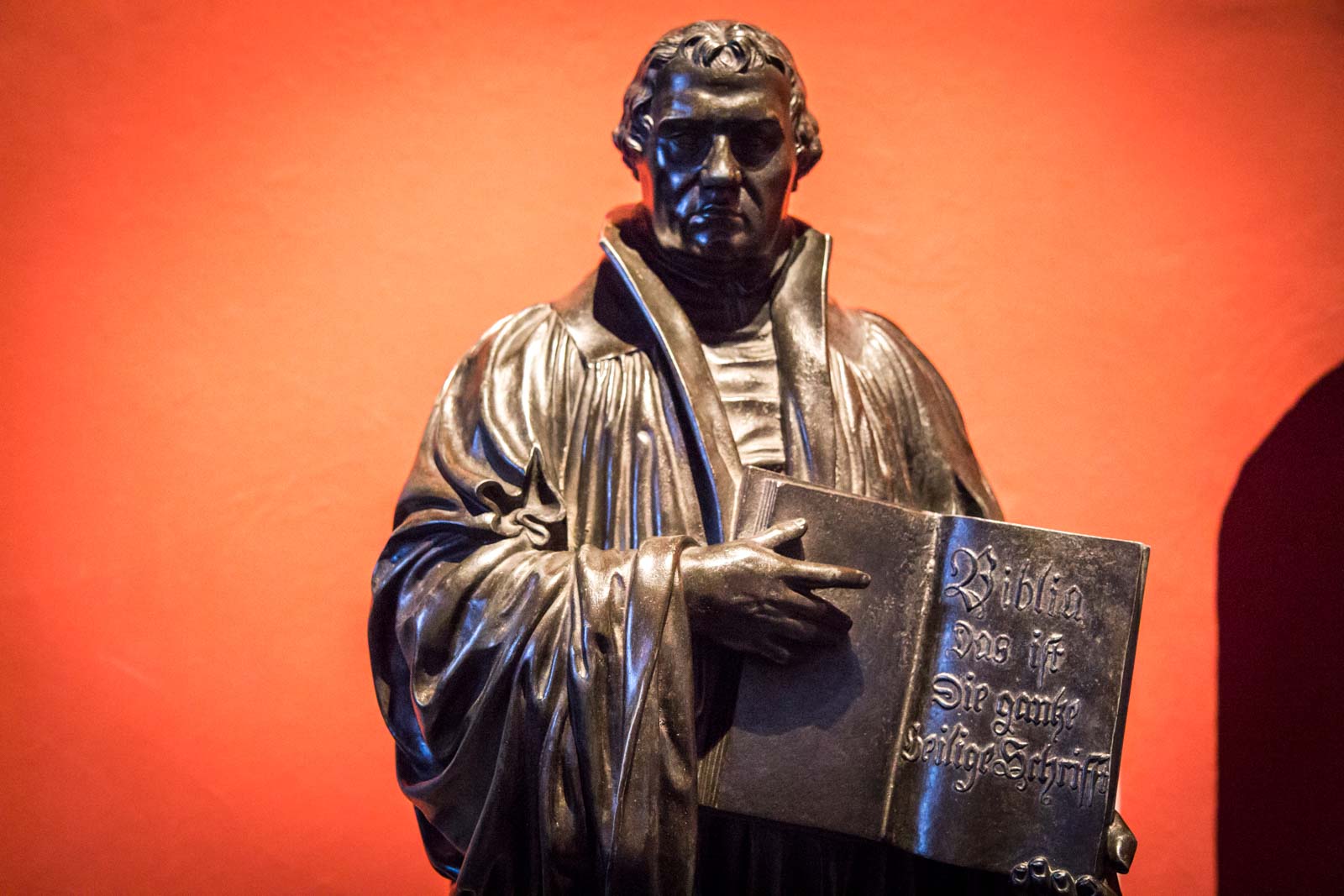 Wittenberg today is a lovely little city with large pedestrian areas in the centre of the old city and a pleasant mix of historic buildings with modern conveniences.

On the surface, there is no indication that such momentous events happened – things that really did change the way that religion was viewed across Europe. But it’s not hard to find the evidence of those days.

Visiting the Luther Memorials in Eisleben and Wittenberg

There are two locations that are part of the World Heritage Site which covers the Luther Memorials.

The first is Wittenberg which has the following places: Luther Hall, Melanchthon’s House, the Town Church, and the Castle Church.

All of these sites are close to each other and easily accessible.

Luther Hall has the most detailed information and collection of items in it and you could easily spend a couple of hours seeing everything. The second location is the town of Eisleben, about 100 kilometres away. It is much smaller and has a quaint feel to it.

The two places here that are part of the World Heritage Site are Luther’s birthplace and the house in which he died.

The house he was born in has an excellent museum attached to it and is well worth a visit. It does not have as many original documents and items as the Luther House in Wittenberg but it does a great job at explaining the history and significance of the man. While it isn’t essential to visit both locations to understand more about the life of Martin Luther, both places to bring something slightly different to the experience.

Eisleben shows you more about the personal side of the man while Wittenberg is much more about his role in history.

Perhaps if you visit them you will not make the same mistake I did when I sat at that breakfast table with those students. You will not think that this man was unimportant just because you had not heard the details of his history yourself.

There is less choice for accommodation in Eisleben.
I would suggest Pension Stella for a budget option or deckerts Hotel am Katharinenstift for something a bit more upmarket.

It is possible to see the sites in both Wittenberg and Eisleben in a day. If you do that, stay the night in Wittenberg because there are many more options for food and amenities.
You can find out more information here about Martin Luther.