I’m sure you’ve heard about the small European country of Liechtenstein. (If you haven’t, you might like to read some of my stories about Liechtenstein here.)

But perhaps you’re like me and don’t really know much about its history. Well, I want to tell you an interesting tale about it – although this tale is actually mainly about the Czech Republic – and, specifically, about a place called Lednice-Valtice.

Wait, what? Didn’t you say this was about Liechtenstein, I hear you ask.

Well, the two countries are more intertwined than perhaps you realise. Let me explain. 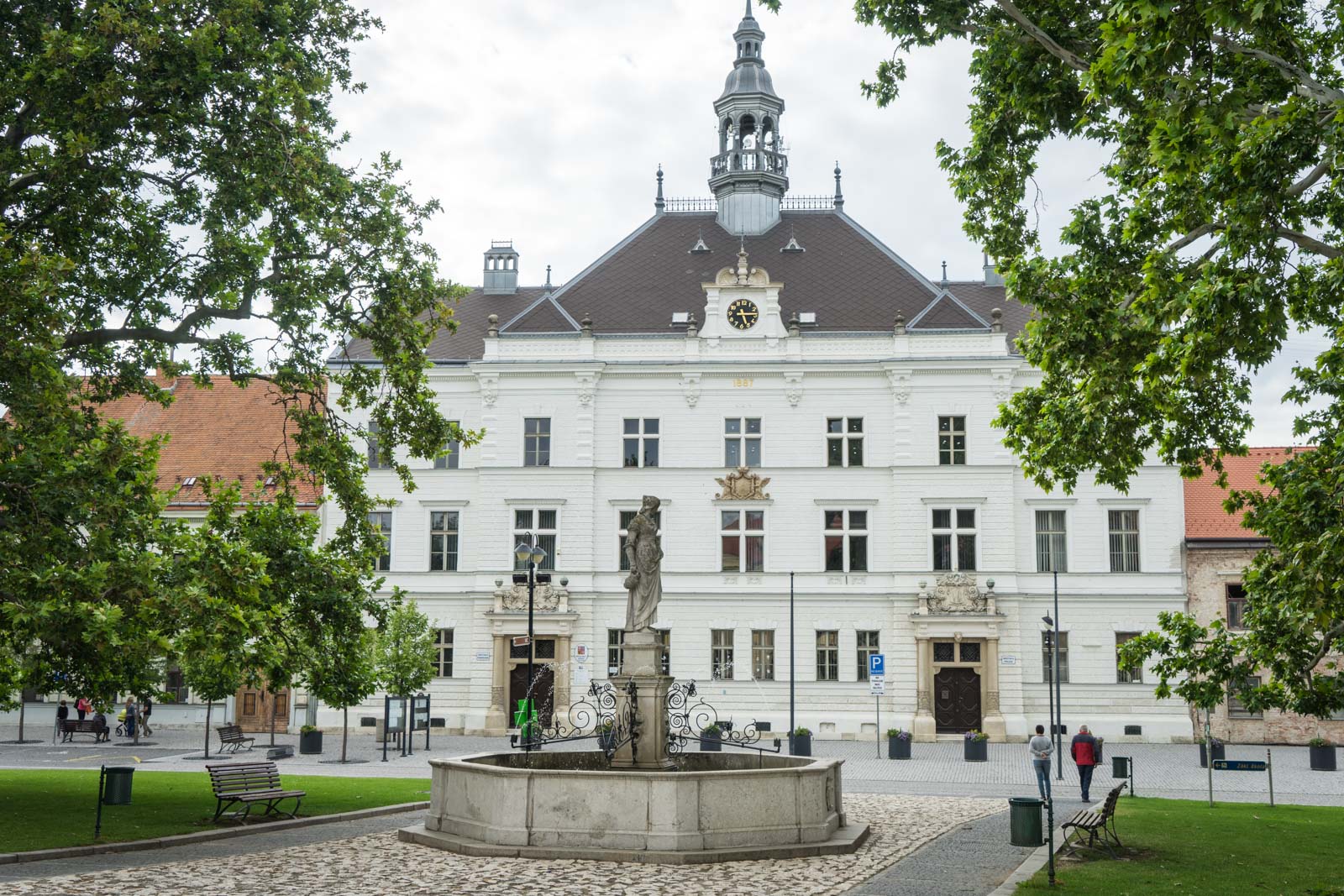 It all starts with the House of Liechtenstein, a rich and powerful dynasty that first emerged in Austria in the 12th century. Over the centuries, they expanded their sphere of influence until they controlled a lot of land across an area that is in present day Austria and the Czech Republic.

The thing is, though, that although they controlled a lot of land, they didn’t technically own most of it. But by the 1600s, you needed to own the land to be a part of the ruling elite in Europe.

So, the Liechtensteins bought two small adjoining bits of land – Schellenberg in 1699 and Vaduz in 1712.

In 1719, the Holy Roman Emperor, Charles VI, declared those two areas should be combined and be known as Liechtenstein, and the family was now officially a part of the empire. I tell you all of this as way of background because it’s important to realise that the senior members of the dynasty apparently didn’t even set foot in their new principality for decades.

It wasn’t where they were from and they had little interest in it – the new country was really just a political technicality. They were living the high life in Central Europe.

The main residence of the Liechtenstein family was at Lednice-Valtice, an enormous estate in modern day Czech Republic. Lednice-Valtice is made up of two main centre – Lednice and Valtice. They both have enormous palaces but, aside from that fact, have very different atmospheres.

However, there’s a consistent feel to the vast parklands that surround and connect them.

A long avenue goes directly between the two and passes lakes, forests, landscaped grasslands and smaller (but still grand) buildings. I’ll tell you a bit more about what you can see there in a second, but let’s just briefly go back to the history, because it’s important… and is still relevant today.

The Liechtenstein dynasty was still living at Lednice-Valtice right up to the 1900s, until the outbreak of the Second World War.

The family refused to support the Nazis and so the fascists confiscated the palaces and grounds in 1939 and threw the Liechtensteins out. When the war came to an end, the area became part of Czechoslovakia.

Although the family asked for the estate to be returned, the communist government refused. When that government collapsed and the new Czech Republic came into being in 1992, the Liechtensteins again asked for their estate back. Again, they were rejected.

This has set up a lot of legal action and the issue is still not fully resolved… although there have been some recent developments. 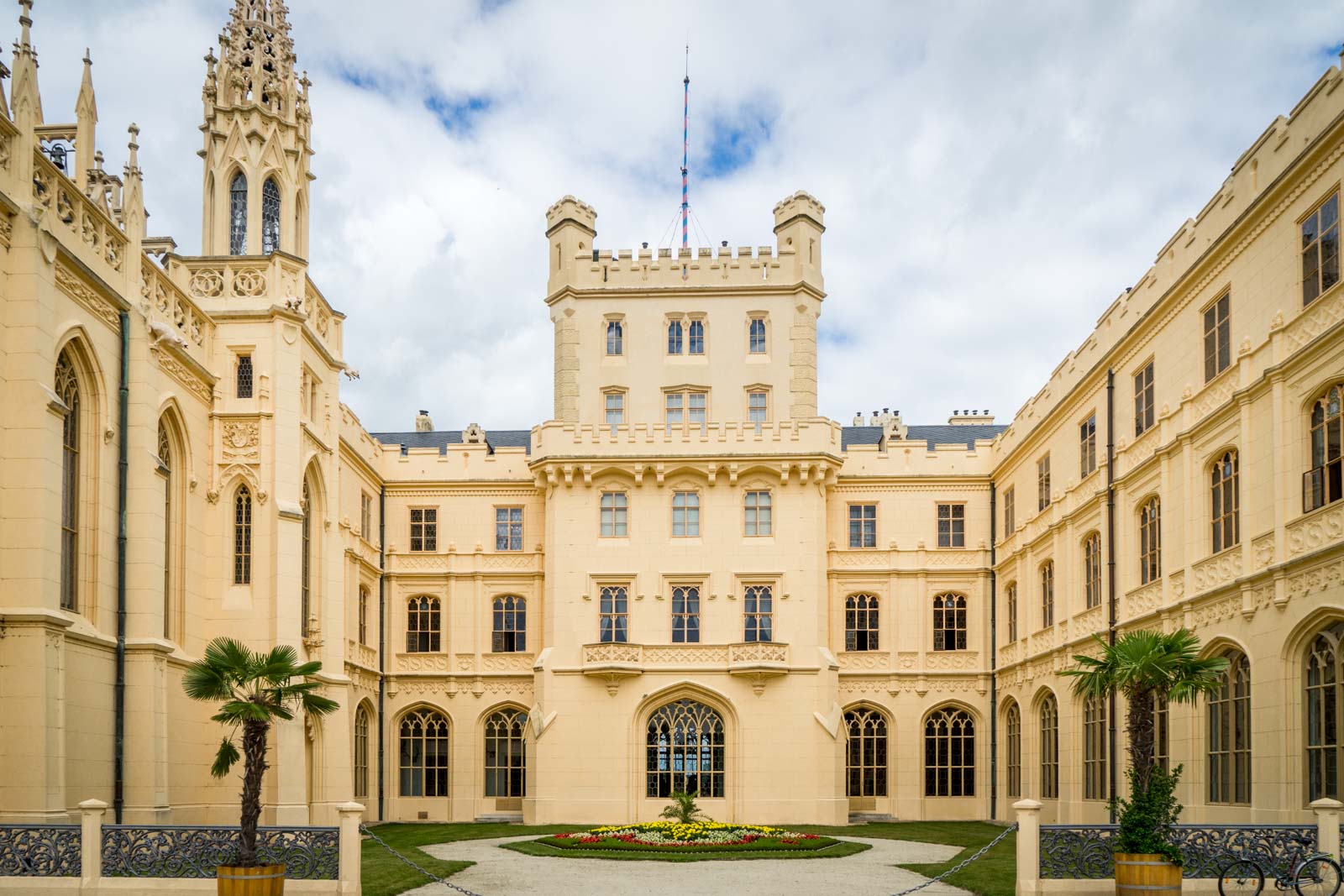 You can see why the family would want Lednice-Valtice back. It is a beautifully sprawling property that combines some of the most stunning castles in Central Europe with a natural playground that at times seems magical in its intricacy and, at others, like an untamed wilderness.

I begin my exploration at Lednice. The huge palace dominates everything and, until you’re quite far away, you can’t see it all at once.

It was originally a Renaissance villa, then became a Baroque estate house, and finally was renovated as a Neo-Gothic palace in the mid-1800s. 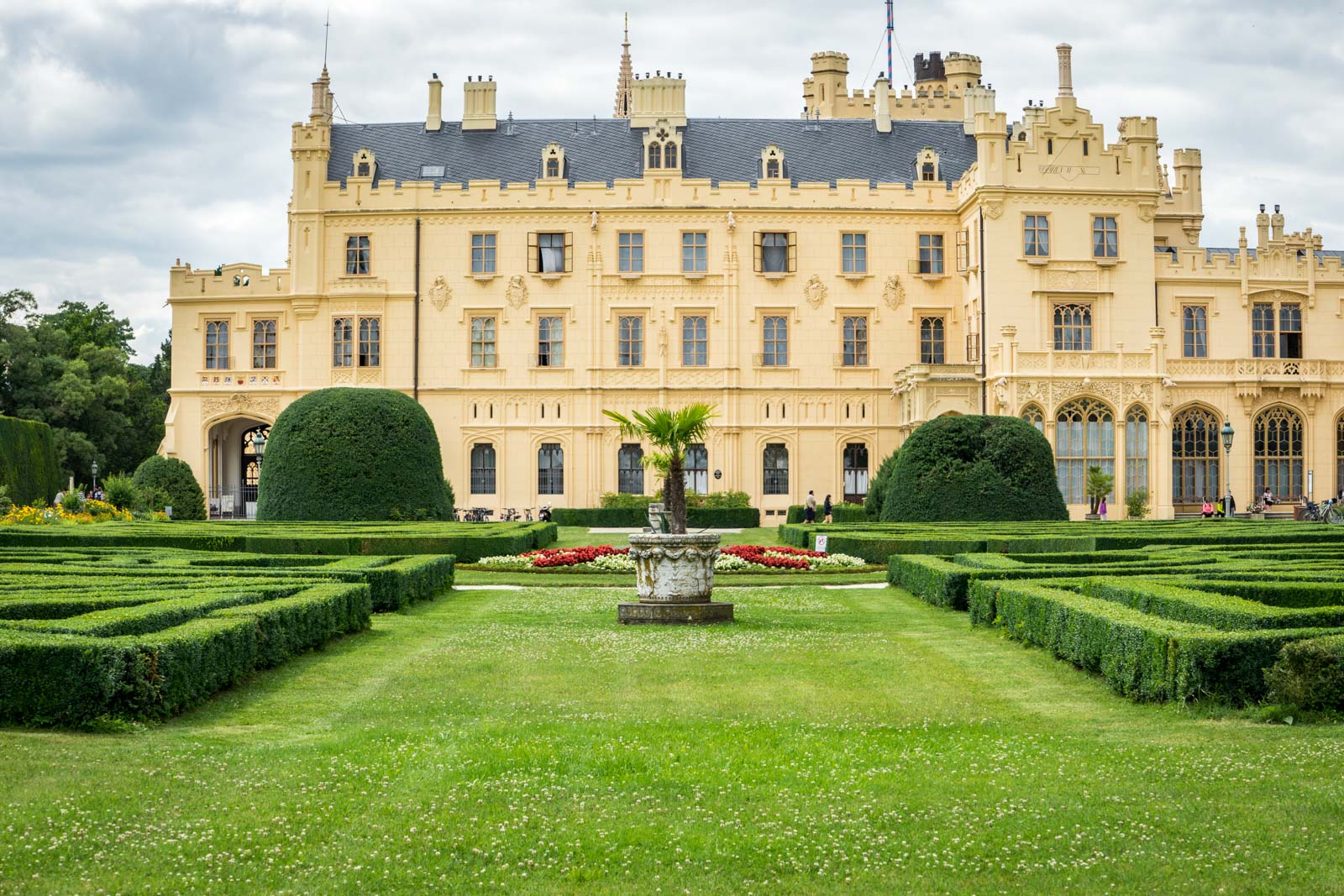 Although the buildings should probably be the focus, I find myself drawn to the gardens instead.

Immediately adjacent to the palace is an extensive area with carefully-designed flower beds and rows of hedges, intermixed with statues and fountains. But behind the palace, stretching out into the distance, is an absolutely enormous park with a lake at the centre.

The trail around the lake takes me almost an hour to walk. Along the way are little treasures to discover – buildings appear out of nowhere for no apparent reason – the artificial ruins of a Medieval castle and a sixty metre high minaret, for instance. I walk along the long road from Lednice to Valtice. It’s about 7 kilometres and takes me more than an hour (there is a bus that connects the two that I probably should have taken). Arriving in Valtice, I can see the difference immediately. This feels like a town… because it is one.

The outskirts are like any small town, with rows of houses, an industrial zone, a shopping centre.

It’s only when you get to the centre that the huge palace makes it seem special. 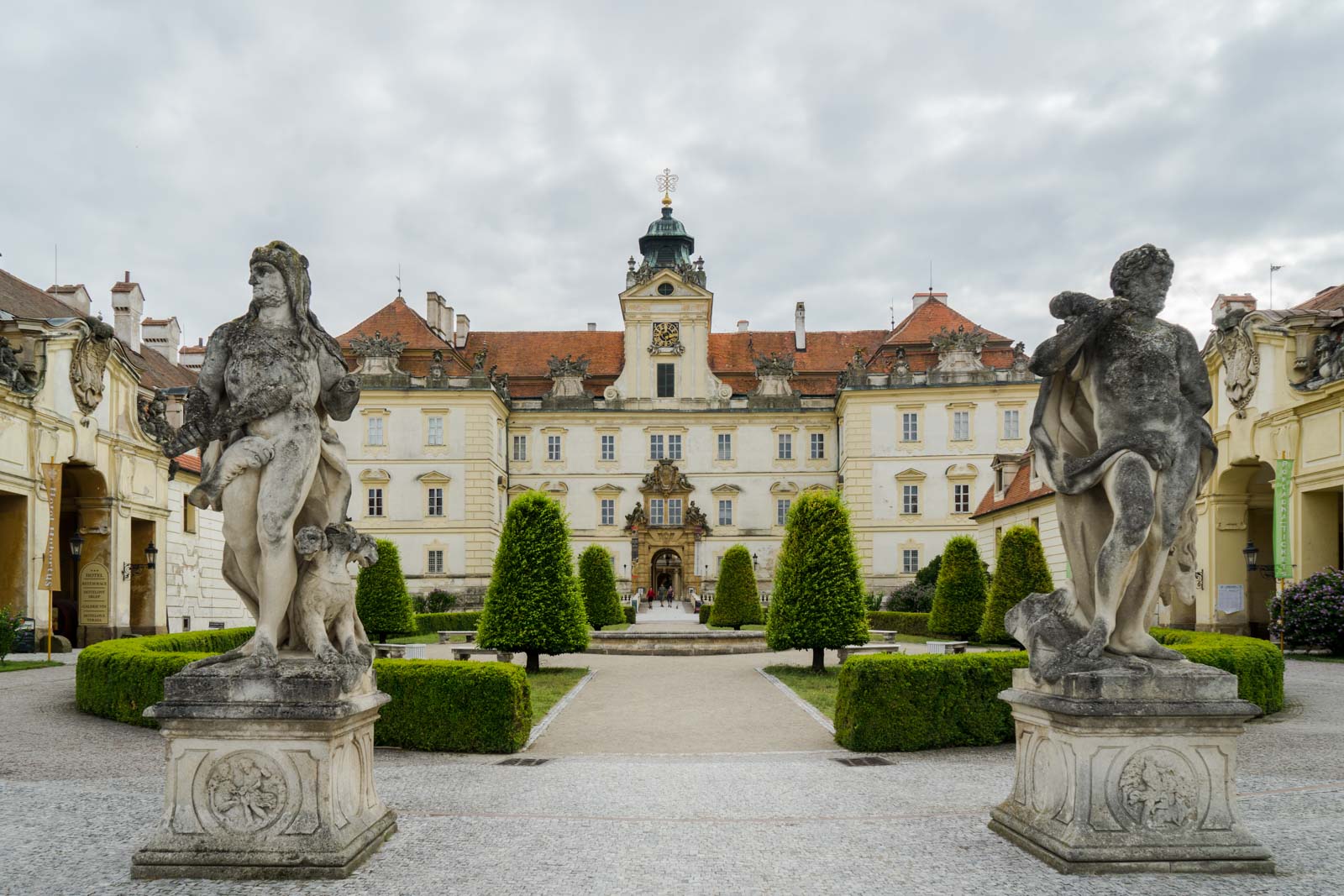 Compared to the previous one, this palace feels more like a castle. It’s built on a hill and has large walls for fortification around it.

The design is clearly Baroque and has a central square within its borders, which the building surrounds. The urban development around Valtice castle means it doesn’t have the same rural or garden feel. The two palaces together, with the parklands, are one of the jewels in the heritage collection of the Czech Republic. It’s obvious why they wouldn’t want to give the estate back to the Liechtenstein family.

But there is something a bit dodgy about how this has all come about.

Sure, land has been stolen and kept for centuries all across Europe and borders have constantly been redrawn. But this just seems a little too recent and unnecessary to seem fair. 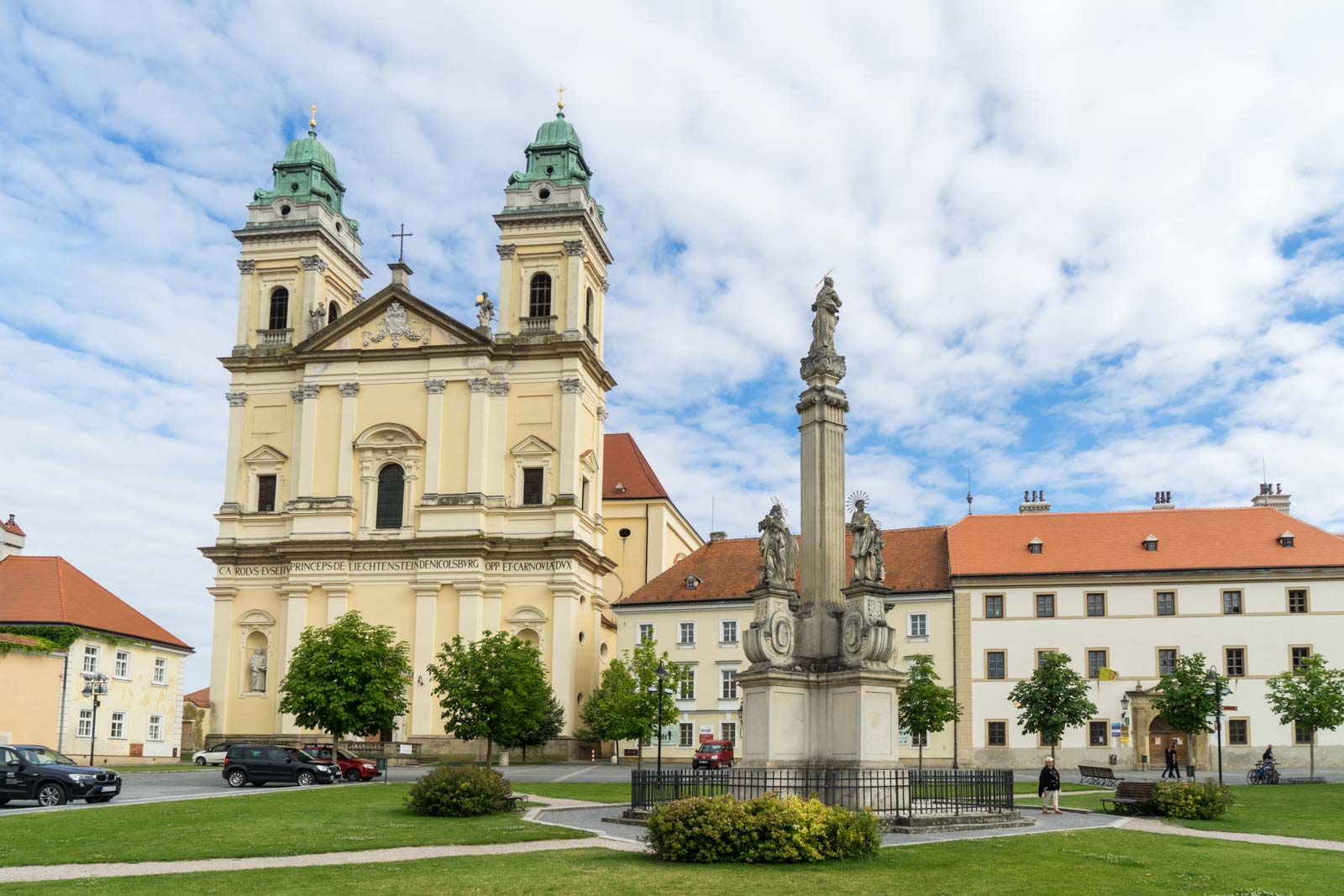 There have been tensions, to say the least, ever since the original owners were thrown off their land.

It wasn’t until 2009 that there was a historic agreement when the two countries of the Czech Republic and Liechtenstein formally began diplomatic relations.

Liechtenstein was the last country in Europe to officially recognise the Czech Republic and it was all about the dispute over Lednice-Valtice (and a few other properties, I should add).

It seems like Liechtenstein may finally have given up. Publicly, at least, it says it will not fight for the property to be handed back.

However, it does also make the point that it would gladly have it back… but maybe after 60 years of fighting, it’s time to just get along.

Where should you stay at Lednice-Valtice?

The largest nearby city is Brno and you may find it more convenient to stay there. However, there are some wonderful places in Lednice and Valtice to spend the night, if you prefer.
If you’re looking for a comfortable budget option, I would suggest Koleje Zamecek.
For an affordable historic hotel, Hotel Salety has an amazing location.
For something a little special, I would recommend staying at HARDY – Cognac & Pension.
Or you could really stretch out at the modern and comfortable Apartment B4 Nepraš.