The fog rolled in overnight and now, as I climb the mountain, everything seems to be trapped within grey padding. If I open my mouth and bite, I’m sure I could eat the cloud that’s surrounding me.

I can make out the trees nearby but I can’t see too far ahead. Luckily there’s an easy path uphill to follow. 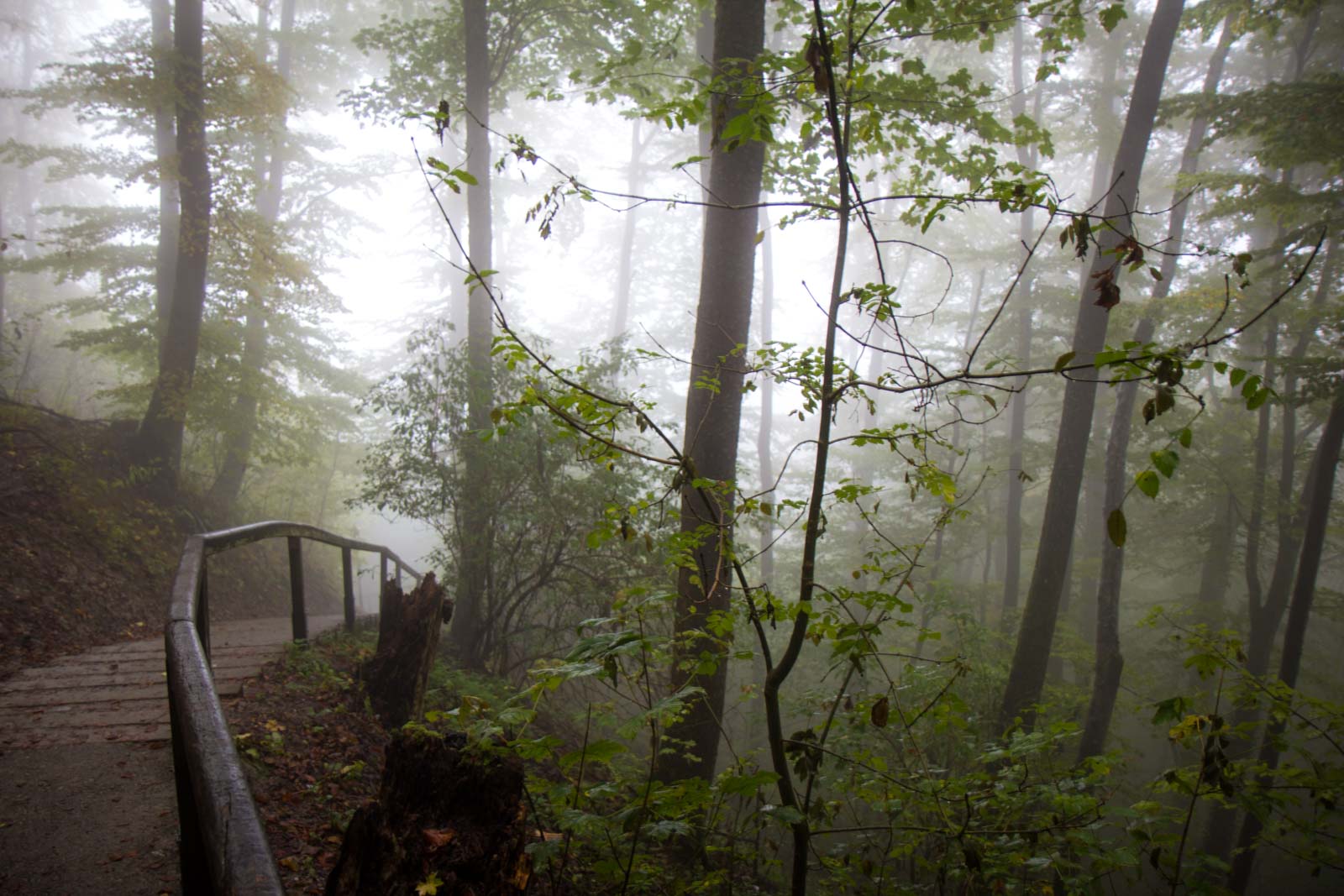 When I get to the top, the fog is even thicker. Now, though, instead of trees poking through the haze, it’s the entrance to an old castle with the intimidating portcullis raised as a welcome from the grey.

This is how I arrive at Hohenzollern Castle, the home of the Prussian kings. 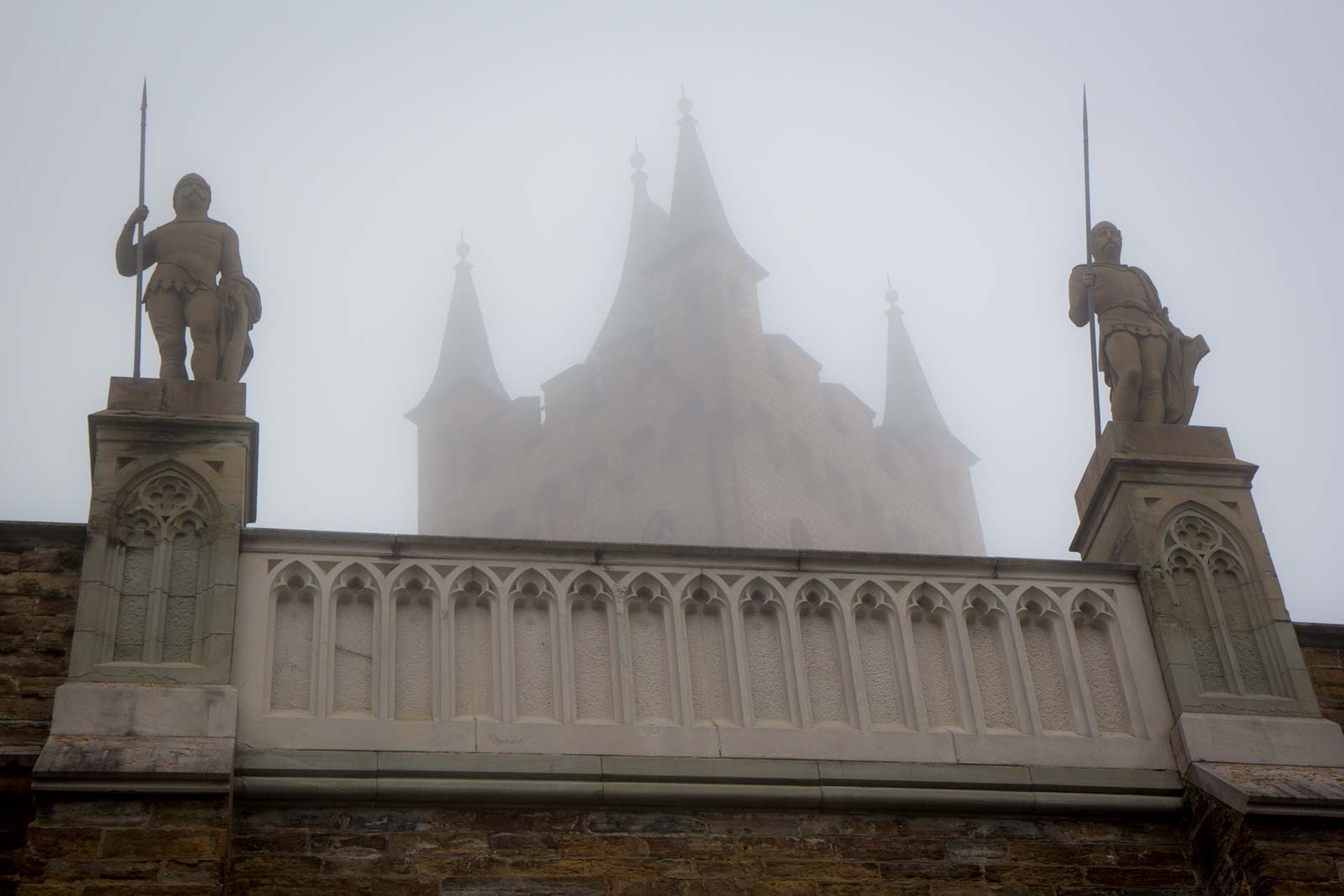 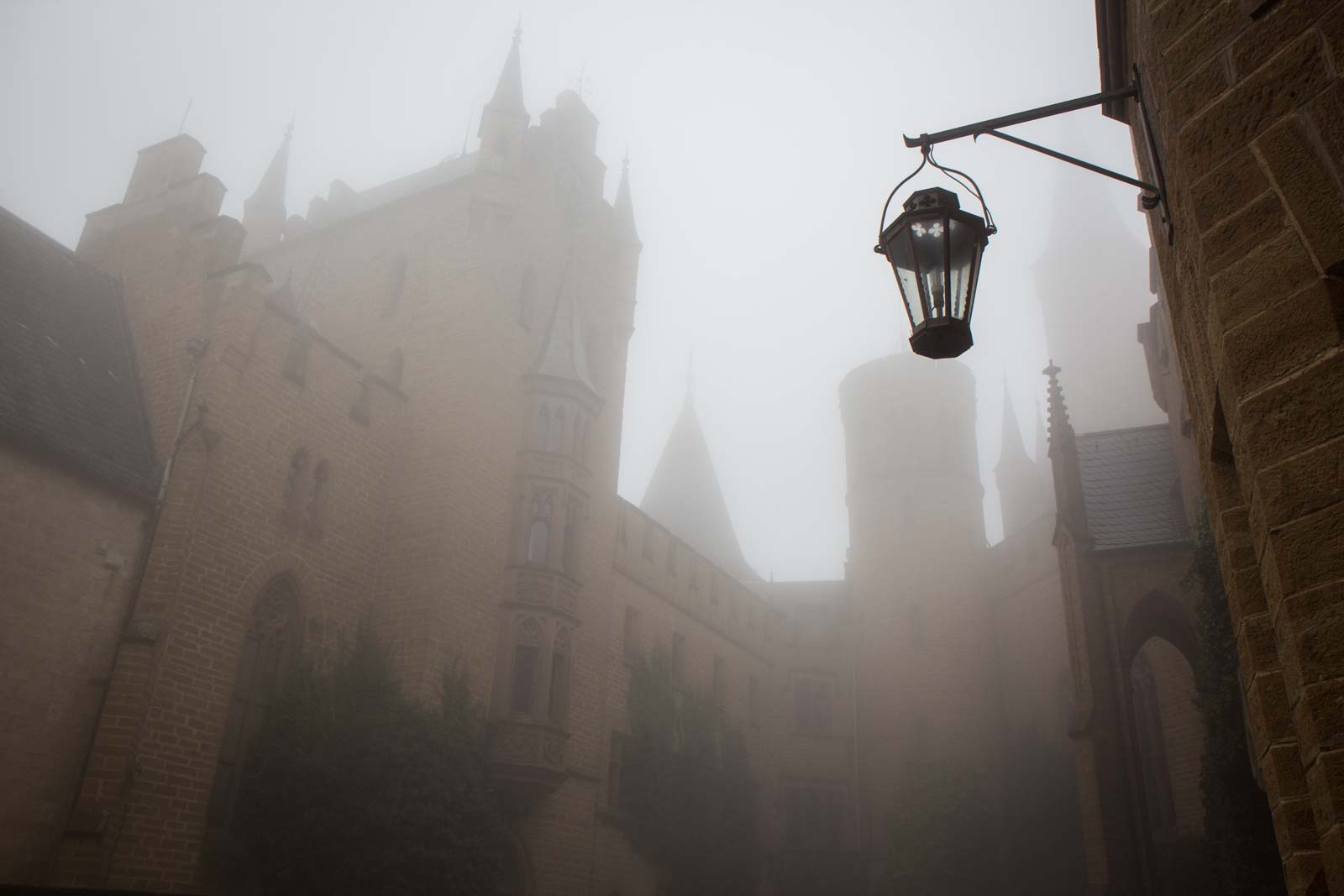 A thousand years ago, the family which would eventually rule this part of Germany – and then the whole country – established their home here.

This castle is a reconstruction from the 19th century but more than a millennia of history is contained at the top of this mountain.

“You could call it the heart of Swabia, or the southwest of Germany,” the castle’s guide, Dirk Horrmann, tells me. 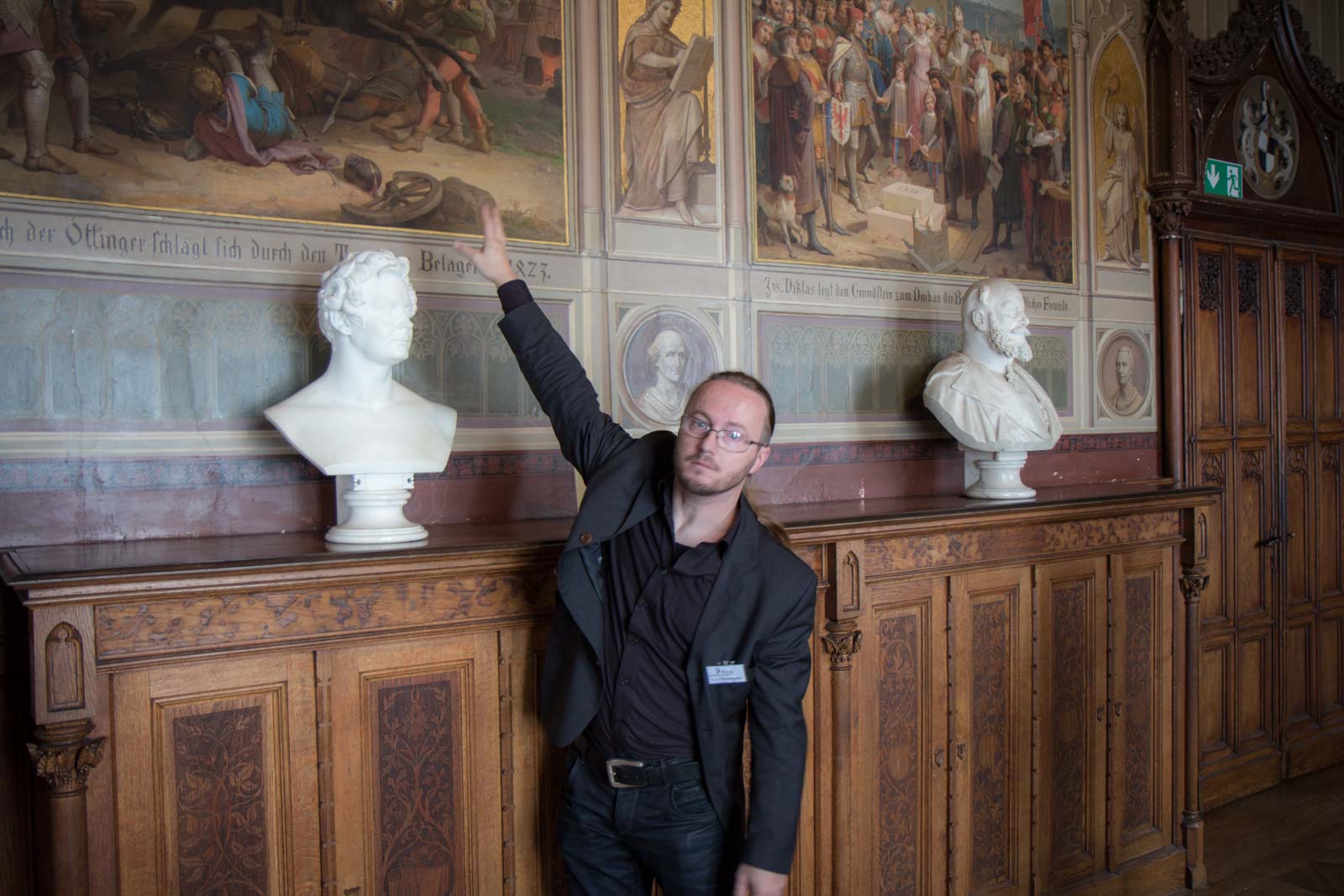 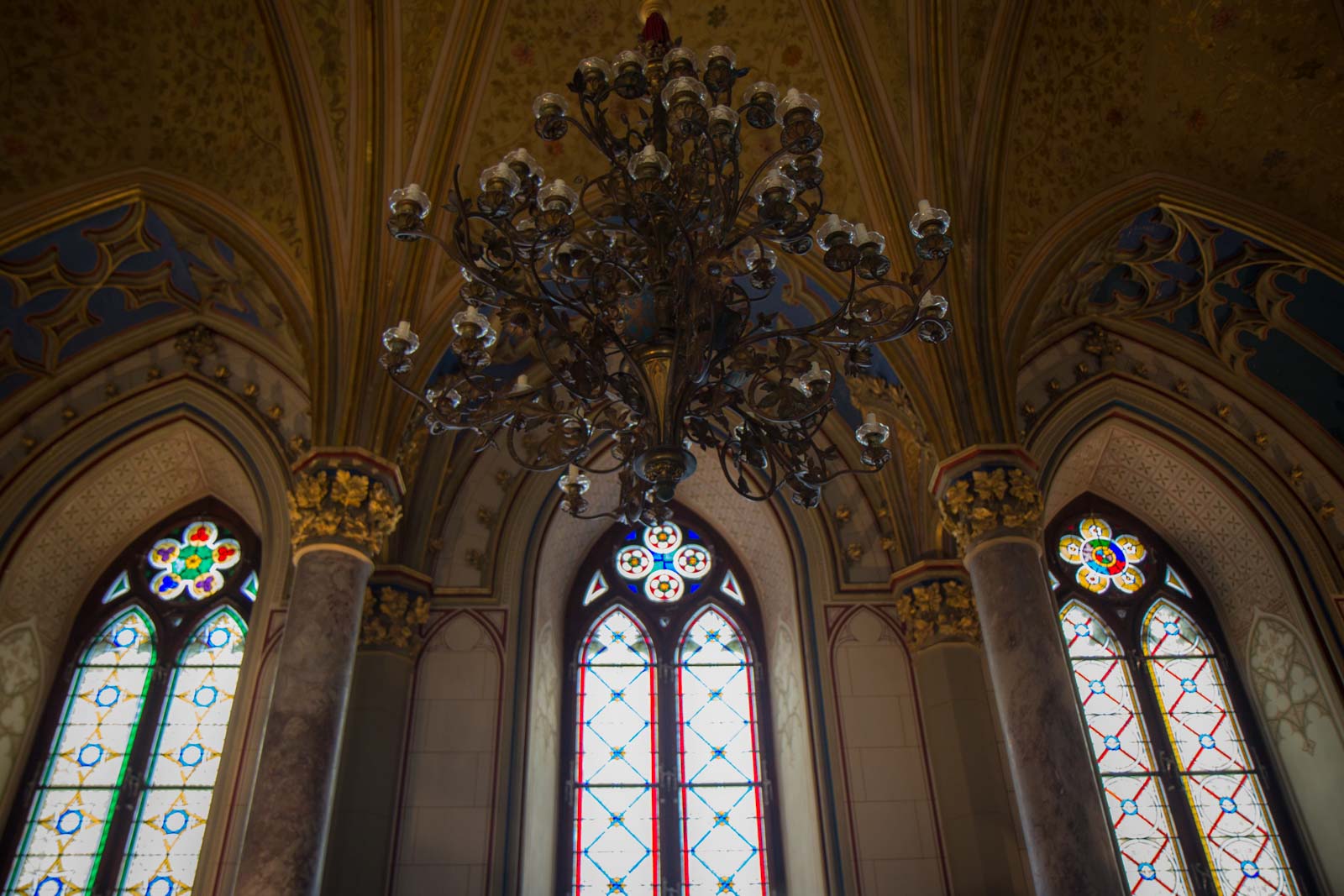 Dirk knows this castle well – all 140 rooms of it. He’s not going to show me them all… but as we start the tour, I get a bit worried at how much there is to see.

We begin in the entrance room where the family tree of the owners is painted on all the walls. 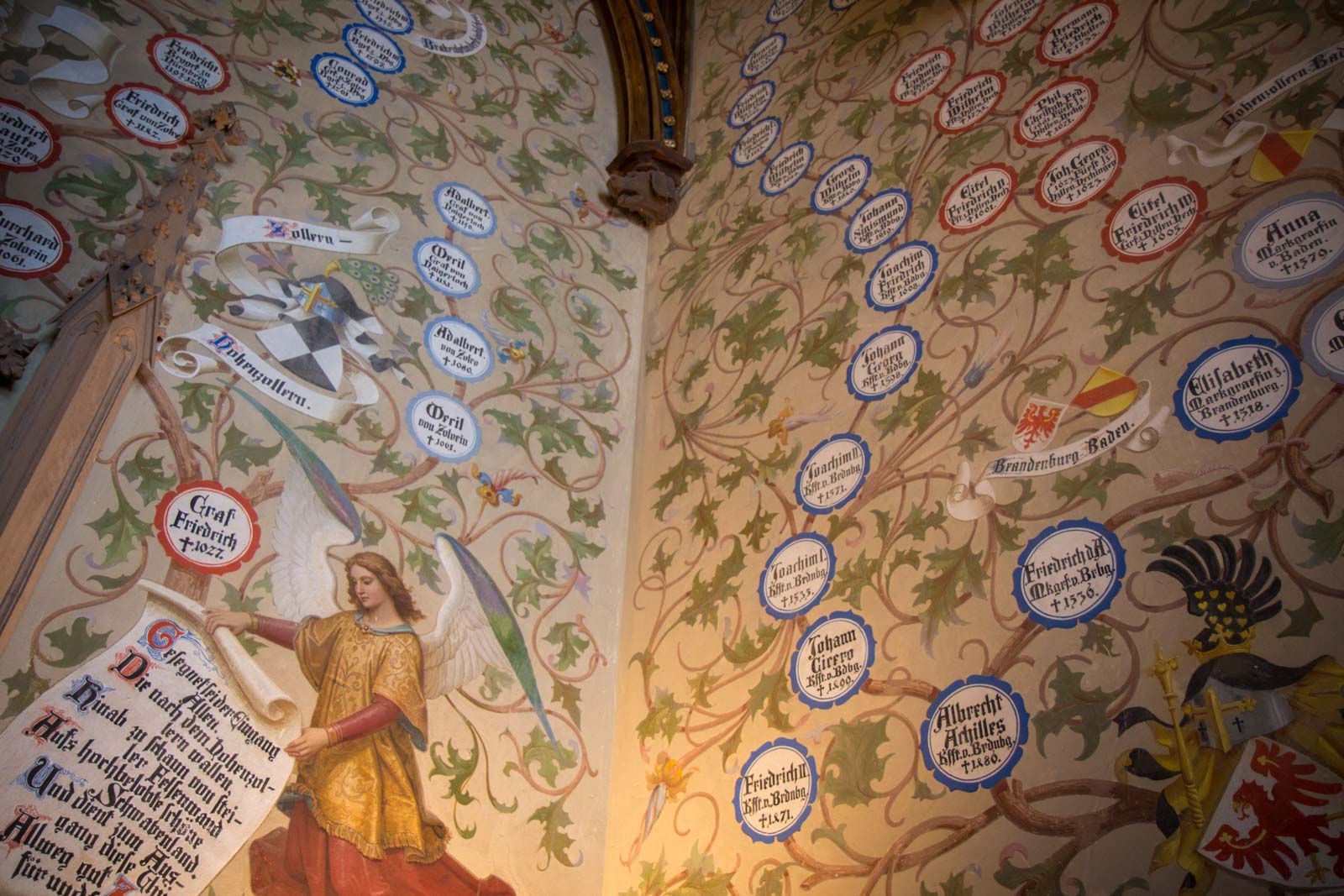 “This is the family tree of the Hohenzollerns,” Dirk says.

“A thousand years of family history…. Don’t be afraid, I don’t want to tell you all the details.”

I get the sense he’s told that joke before but everyone in the group still chuckles. I feel like you need to encourage the Germans when they try to show a sense of humour. 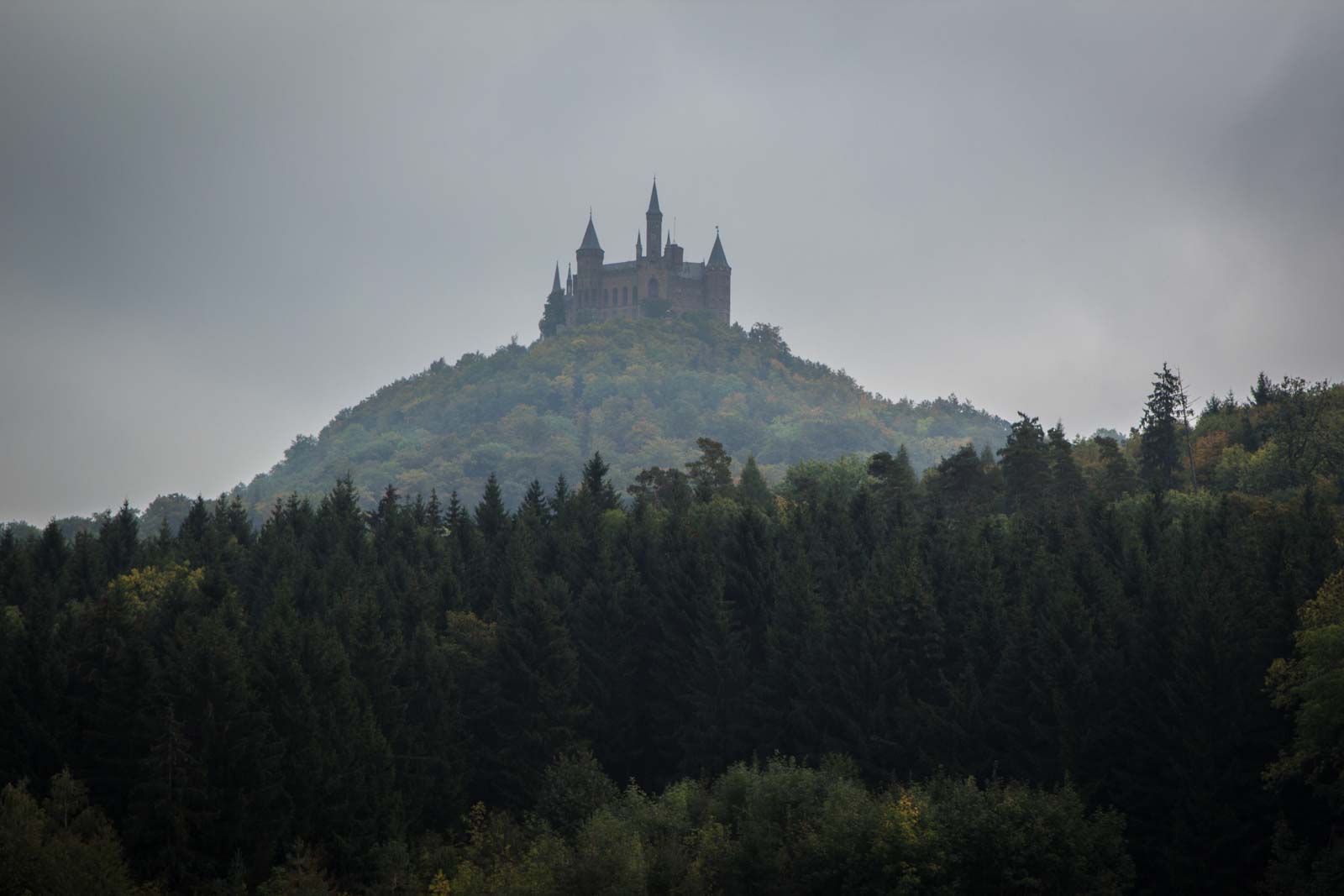 It’s a majestic castle. On a day when there’s no fog, the castle at the top of the mountain is one of the most iconic images of this region. But it’s here, inside the rooms, that you can really appreciate the royal influence.

There are the golden chandeliers with candles that needed to be replaced every day, the high cathedral-like ceilings, the plush blue lounges in the queen’s chamber, the stained glass and the watchful statues. 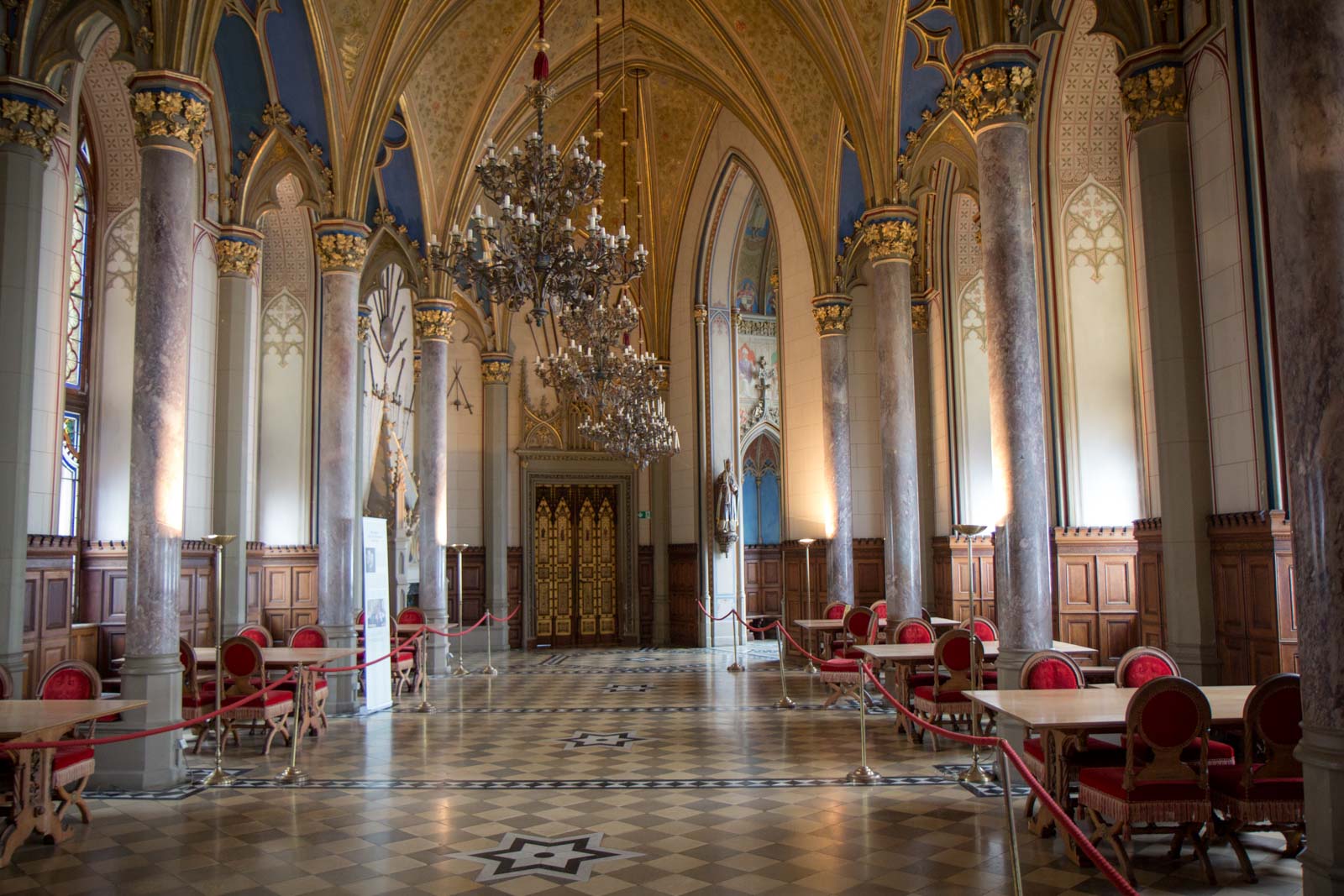 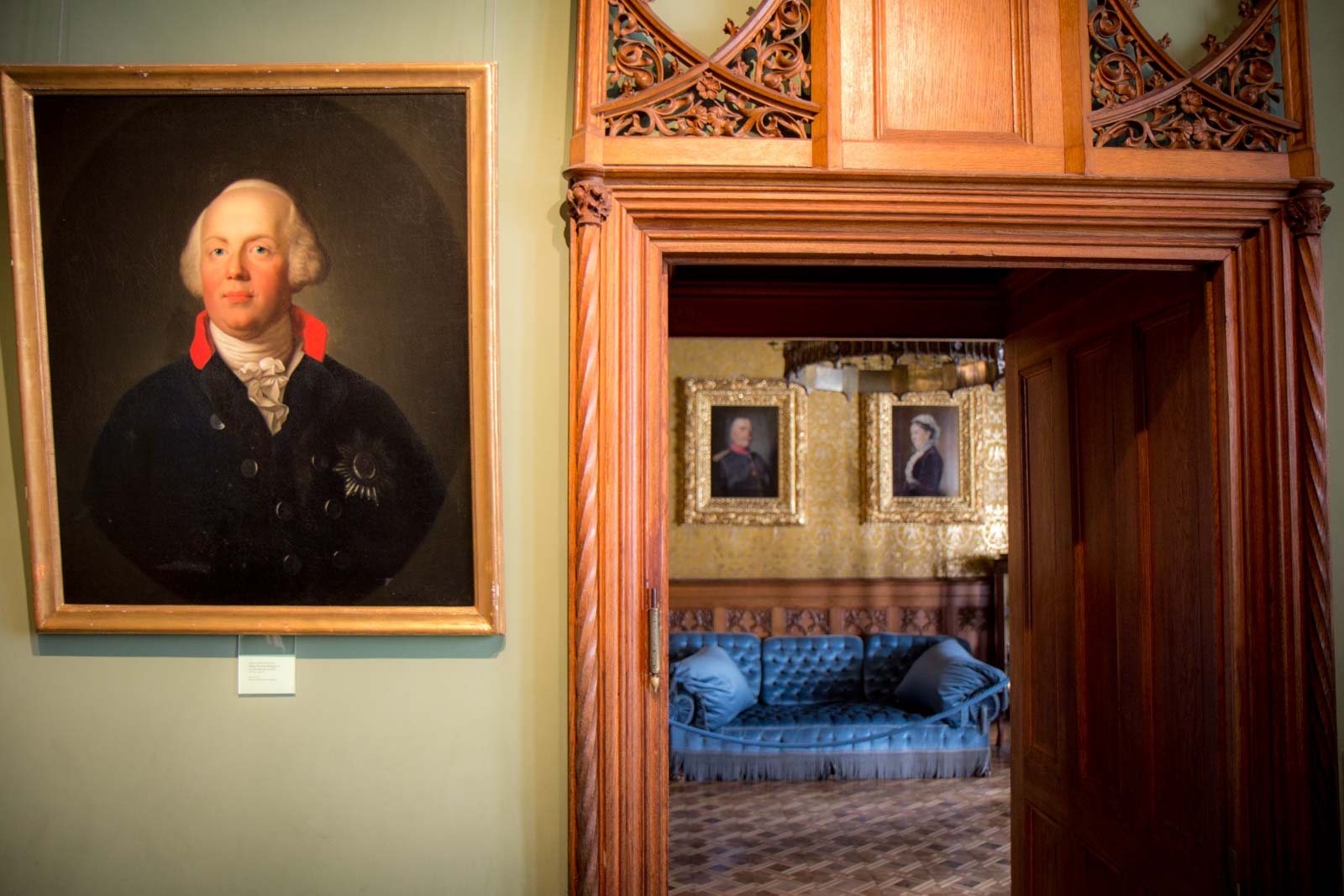 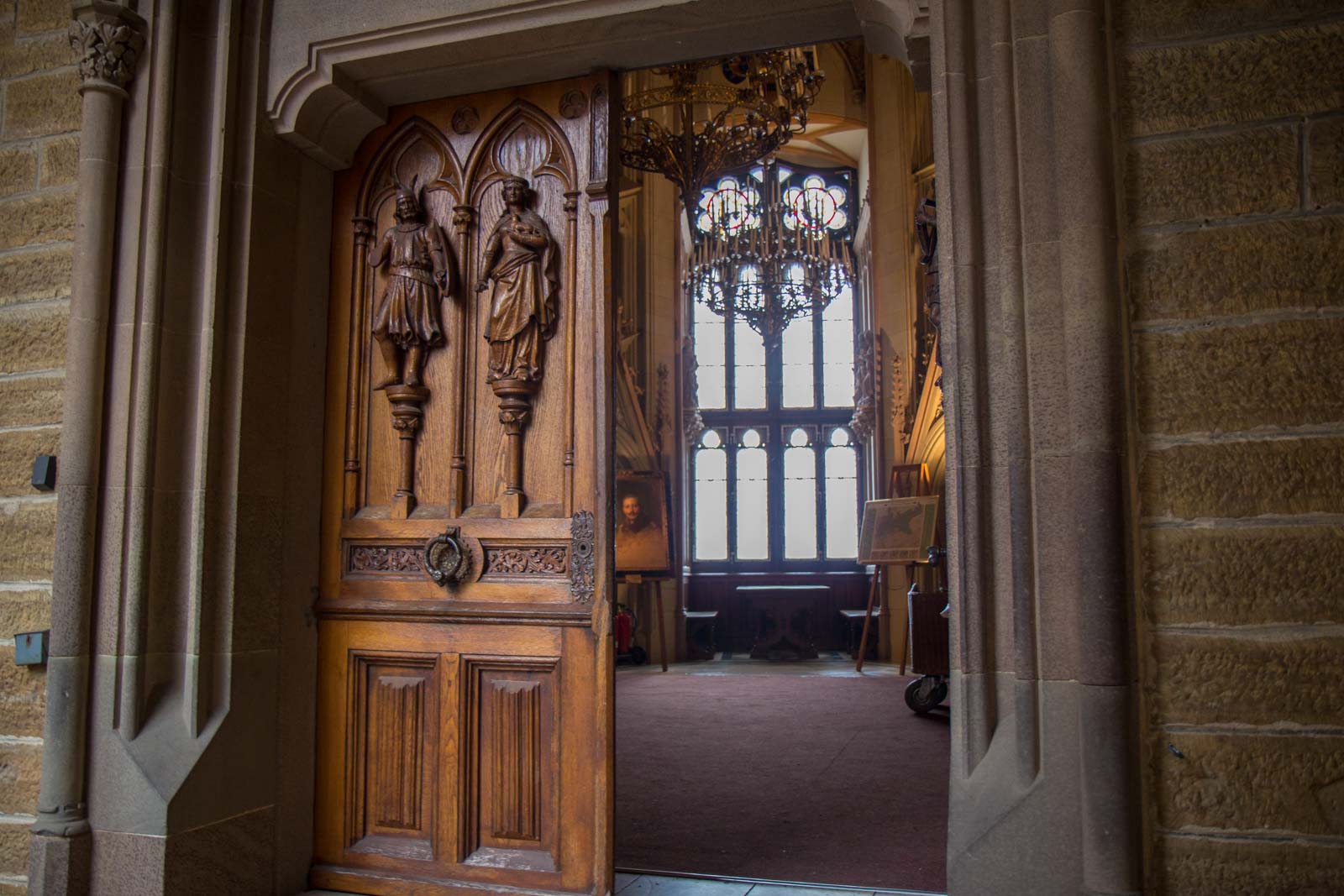 If it feels a bit like a museum, I guess that’s because it is. Hohenzollern Castle has not been a permanent residence for hundreds of years.

“No family member of the Hohenzollerns was living here for long term… so I would call it a kind of weekend house,” Dirk says, to more chuckles.

“There was only a kind of staff or soldiers being responsible for the castle but there were a few decades where no family member was living here in the castle at all, only for visits or short stopovers.” 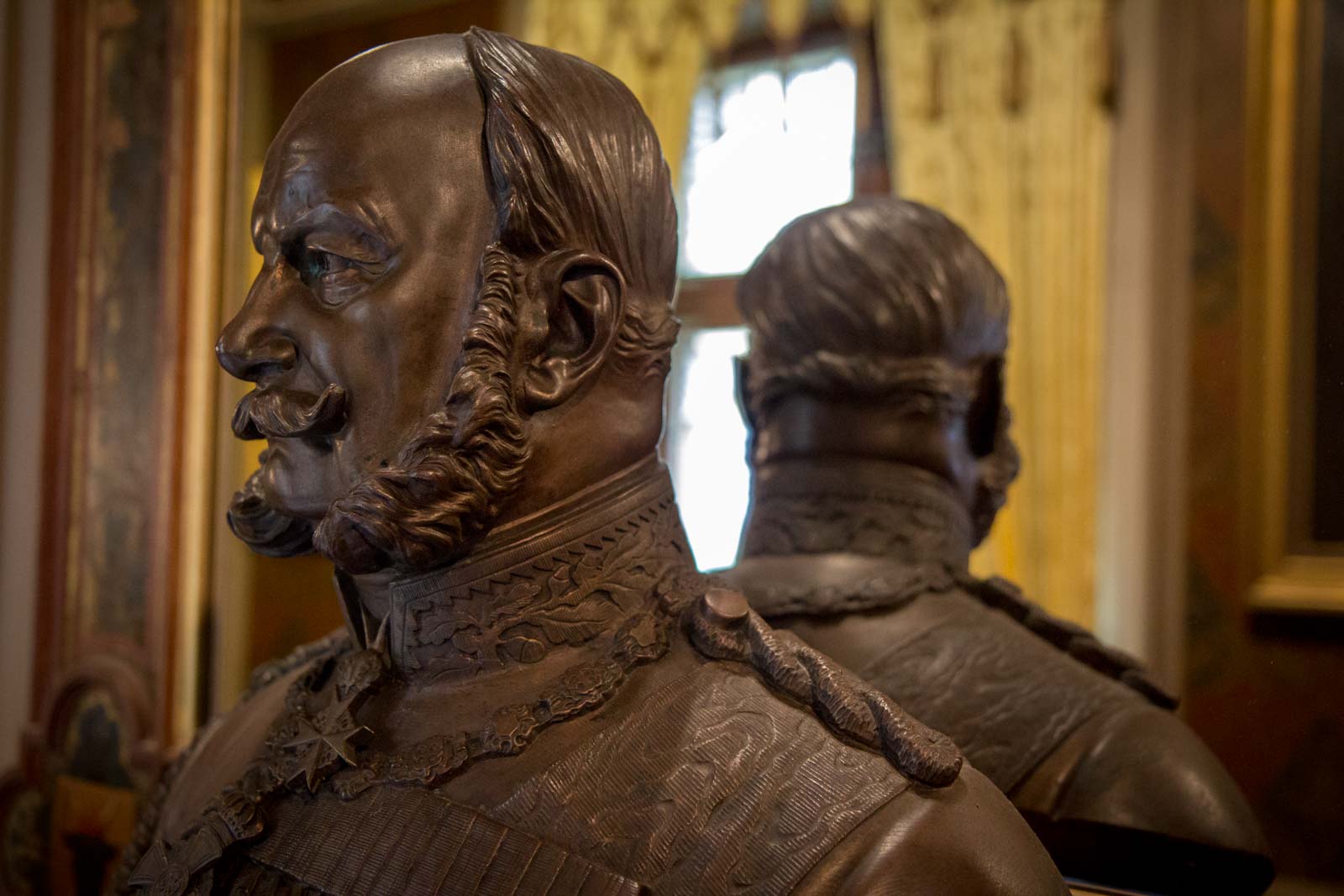 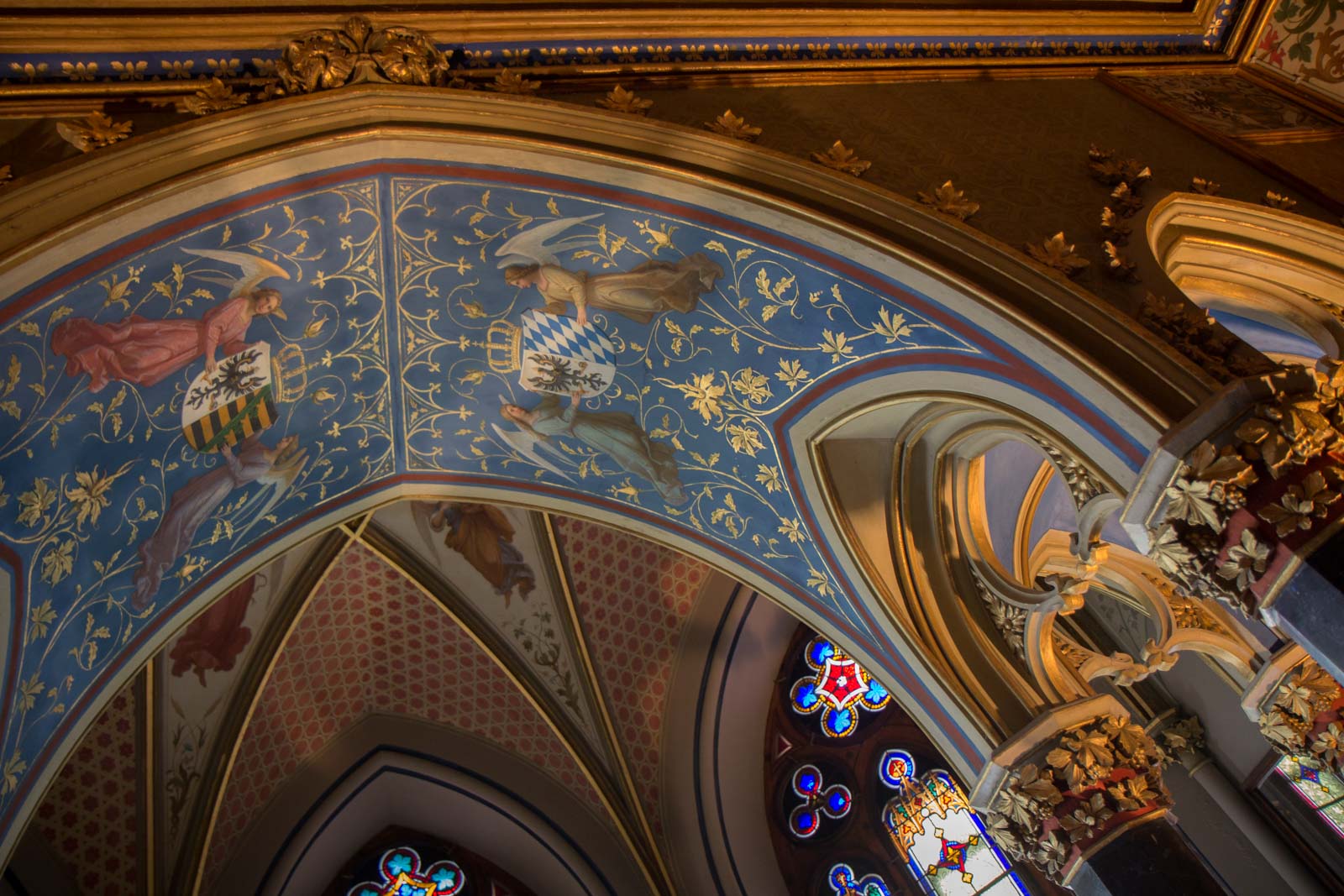 You do wonder why you wouldn’t live in such a splendid home if it belonged to you. For the Hohenzollerns, though, power was more important.

They moved to Berlin to take their place in the leadership of the German Empire and just never came back.

The castle and the surroundings stayed with the family and today is owned by George Friedrich, the Prince of Prussia. He is the great-great-grandson of the last German Emperor, Wilhelm II.

“Some of the family members still visit the castle,” Dirk explains.

“Our boss, Prince Friedrich, for a few days a year he’s here in the castle. He is a prince but he has no political power. You know, Germany is a republic so these times are gone.” 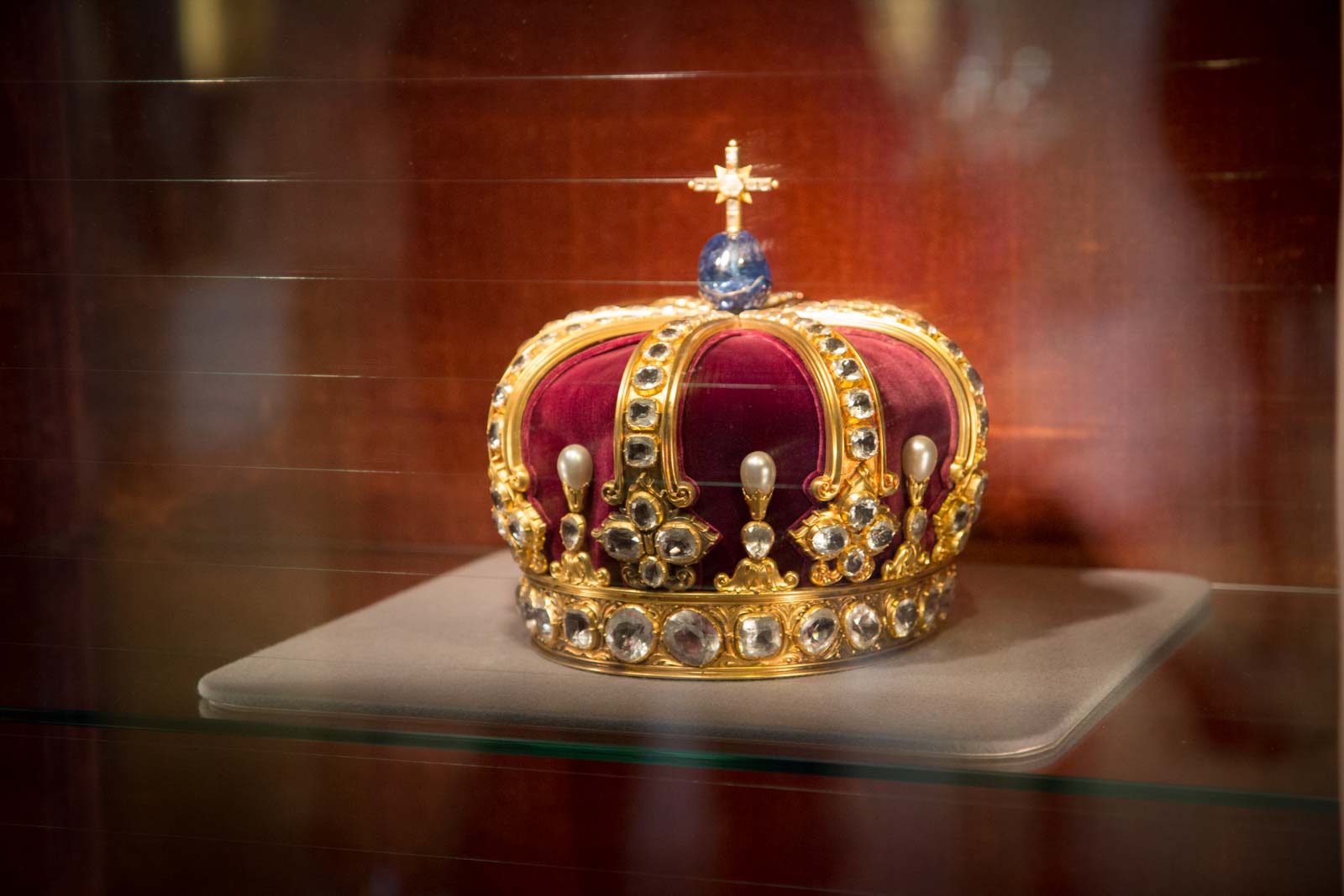 They may be gone but they are not forgotten. The decision to rebuild the castle in the 19th century, despite the family then being based in Berlin, shows how important it was to not let go of this history.

Even if it is just a showpiece now for a royal line blurred in the fog of memories past.

Time Travel Turtle was a guest of Baden-Wurttemberg and DB Bahn but the opinions, over-written descriptions and bad jokes are his own.