For a festival about garlic, it doesn’t smell half bad.

I guess garlic is fairly odourless when it hasn’t been cracked open yet and quite pleasant when it’s being cooked. It’s only after it’s been consumed that the stink wafts out of open mouths – and it’s a bit too early in the morning for many people to have eaten.

But, regardless, there’s a huge fuss going on today about a pretty small plant. Here, on the Isle of Wight, in the south of England, there’s a good reason to be celebrating garlic.

There’s quite an industry of garlic production because this is one of the best parts of Northern Europe to grow it. The soil is rich and as Colin Boswell, owner of the island’s Garlic Farm and festival organiser, puts it:

“We have been blessed with a climate here which is particularly well suited for growing most types of garlic. When the sun does come through the clouds, it has a very high light intensity, so we’re a diamond set in the sea in the English Channel and light comes in, reflected off the sea, on all sides.” I’m not sure the island’s local cuisine has been influenced greatly by the garlic over the years – it’s still your standard British fare as far as I can tell, but the ingredient has worked its way into the culture. The annual Garlic Festival is a perfect example.

What started as a small fundraising event in 1983 is now a weekend-long party that will attract about 25,000 people. Some are locals, some are tourists. Either way, Colin Boswell thinks everyone feels like they’re on holiday when they’re here. “Garlic has a Mediterranean association and therefore a warmer softer climate would appear to be what you need for growing garlic – and it is what you need.”

“In the 1970s when British people first started to eat garlic seriously, why did they want to eat garlic? Well, the smell of garlic and red wine cooking was an evocation of the holiday they had just had on the continent and they wanted to replicate that.” The Garlic Festival on the Isle of Wight feels like a typical country fair. It has rides for the kids, sideshows, market stalls and entertainment.

At one end a large stage has bands playing throughout the weekend and, as I walk around, I spot smaller stages for things like circus acts and clowns. While you could find many of these activities at most rural festivals through the UK, there are a few special ones that stand out.

Take, for instance, The Lamb National. In a pun-fuelled event based on the Grand National, a group of sheep wearing little toy riders race around a track to see who wool make the chop. 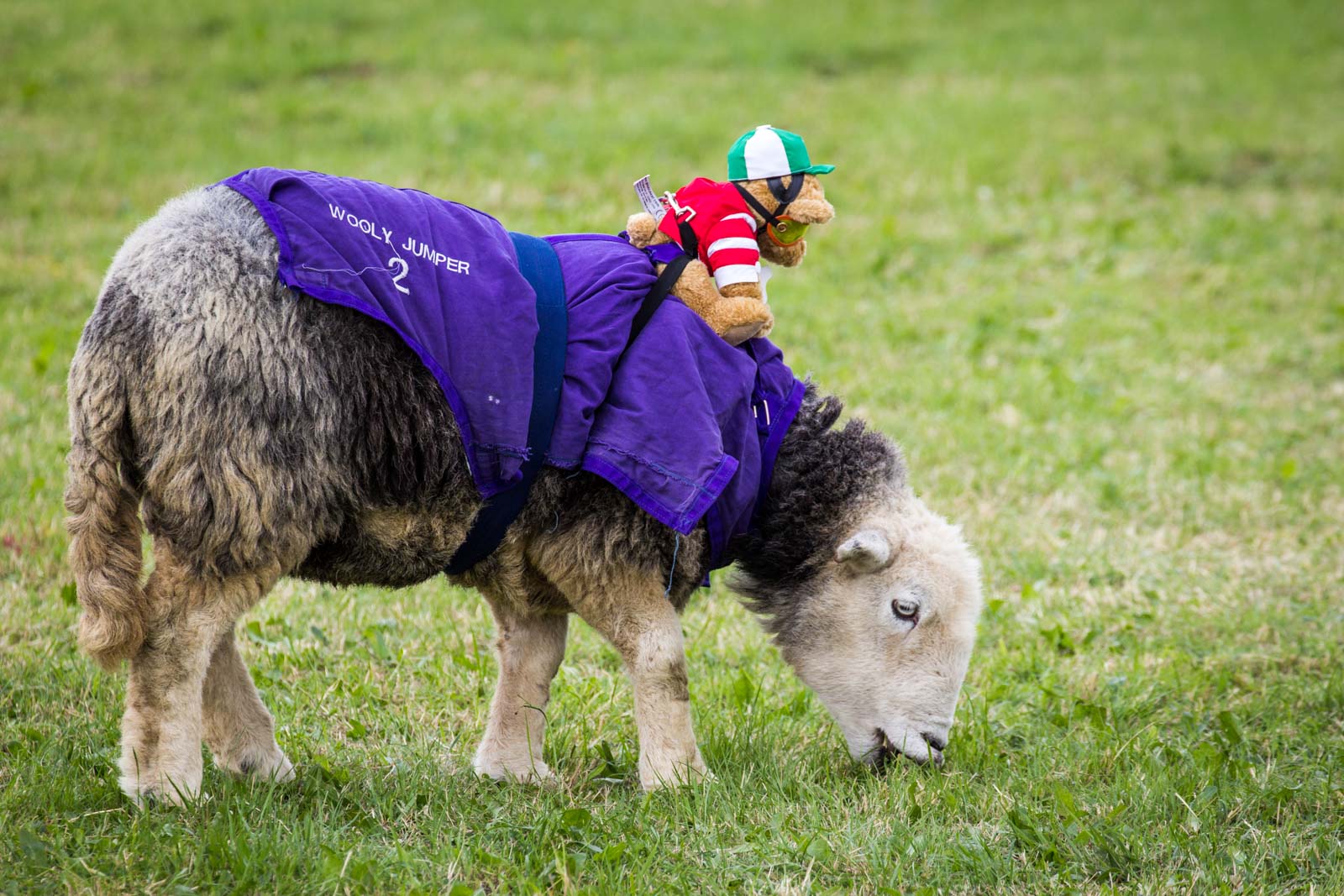 All of the sheep get to race another day. A pity. There are some wonderful garlic sauces here that would be perfect on a roast lamb.

And, despite the carnival atmosphere, the focus of the festival is still clearly on the garlic. I find a tent where there are talks and cooking demonstrations all weekend about garlic.

I catch a chef at one point showing a few simple recipes that you can do with different types of the ingredient; there’s also a fascinating lecture about a journey into Central Asia to find the original species of garlic.

Who would’ve thought that the little thing that I just crush up and throw into a pan had so many interesting facets?? There’s also a large tent with all sorts of different garlics and garlic-related products on display (and for sale). It’s here that I meet Nick James, a local expert on this particular topic.

He’s working in the tent, selling different varieties to the crowd that has gathered around the stalls, but he takes a few minutes to have a chat. I get a disappointed look when I explain that I use normal supermarket garlic for all my cooking. So I ask why the varieties here at the festival are better.

“A lot of that garlic comes from China and it doesn’t really have the depth of flavour,” Nick explains, “and you find you have to use a whole bulb instead of just using one or two cloves, as you do with ours.”

“We have so many flavours of garlic. We have something which is like an early purple variety – top note zingy, very fresh, very juicy. We’ve got elephant garlic – mild, tastes great roasted.”

“We then come onto our hotter varieties – we’ve got red duke, we’ve got purple mendoza – real hot fiery ones for the best garlic breads and curries ever.” 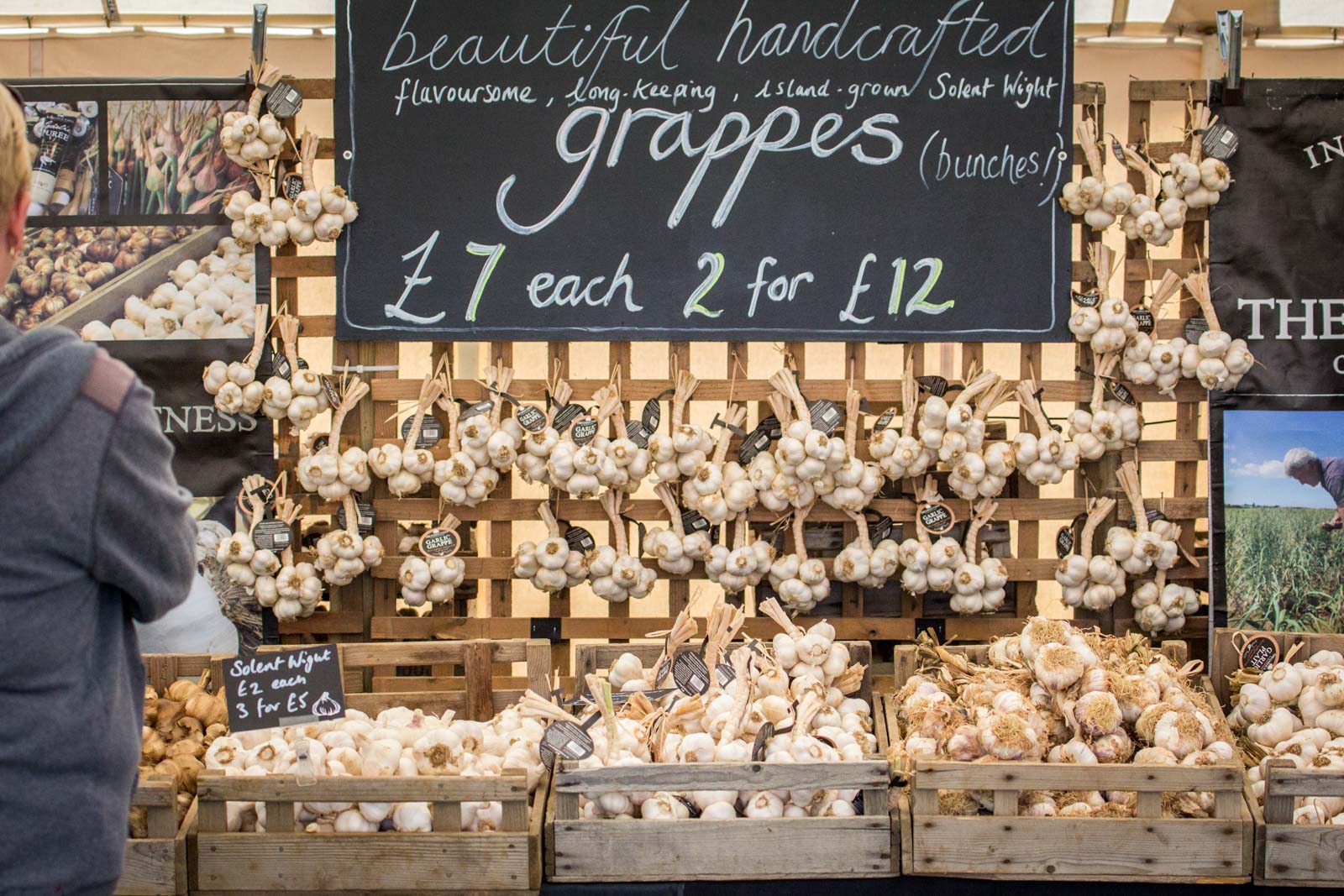 All these different names confuse me. I never realised there was so much variety. I might have to rethink the way I cook (when I cook).

It’s interesting to learn more and, judging by the crowds of people who are lined up to buy some of this garlic, I’m not the only one who has learned about the benefits of the locally-grown produce.

It wasn’t always this way, though. Garlic is a relatively new introduction to the Isle of Wight (in the broader history of agriculture).

It didn’t arrive until the Second World War when French soldiers were based here. They wanted to cook their own cuisine so they brought some garlic over from France. They then discovered that it grew extremely robustly and… well, that story leads us to today. So what do I think of the Garlic Festival? The short answer is that it’s great fun and has a wonderful community feel.

It would be a success even if it was just a general fair but the focus on garlic makes it even more interesting. You can spend your hours here learning more about this important product and improve your cooking as a result.

For people who can travel to the Isle of Wight easily, it’s worth the trip. For others, it’s a good excuse to come and explore the island for the weekend. However, for the best description, I’ll leave the final word to garlic expert, Nick James:

“It’s just a nice idea for a festival, isn’t it? It’s all about food and making that food taste great by adding that little thing called garlic!”

>> You can find out more information here about the Garlic Festival

Time Travel Turtle was supported by Visit Britain but the opinions, over-written descriptions and bad jokes are his own.